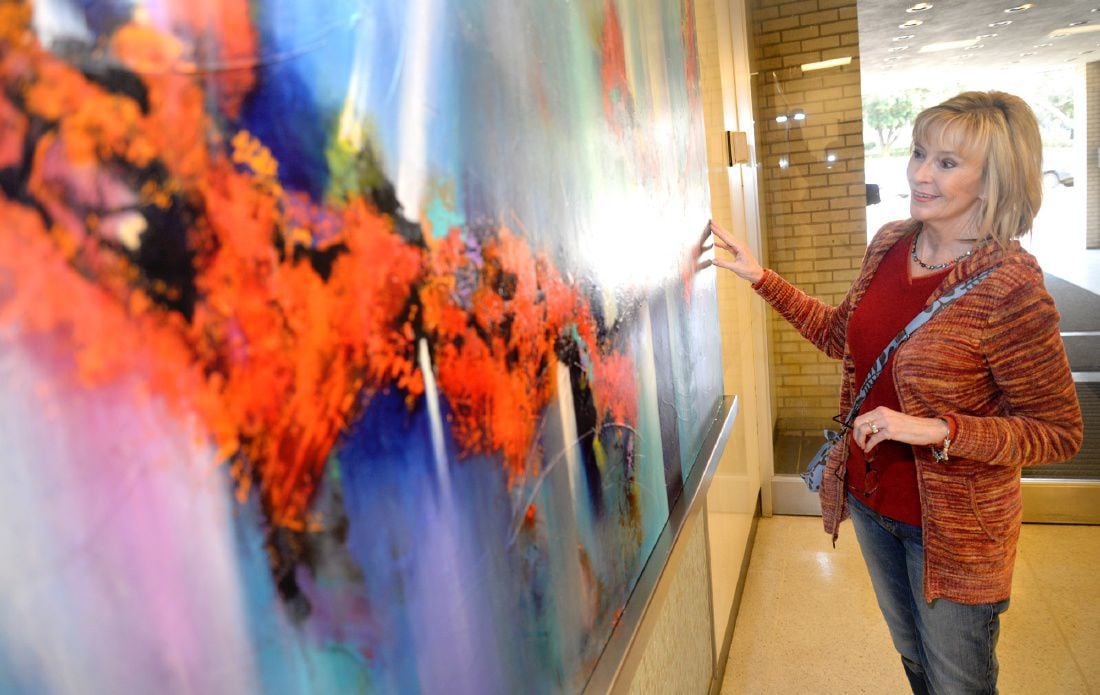 Sharon Grimes shows the large abstract piece Wednesday that she was commissioned to paint at the Regions Bank Building in downtown Longview. 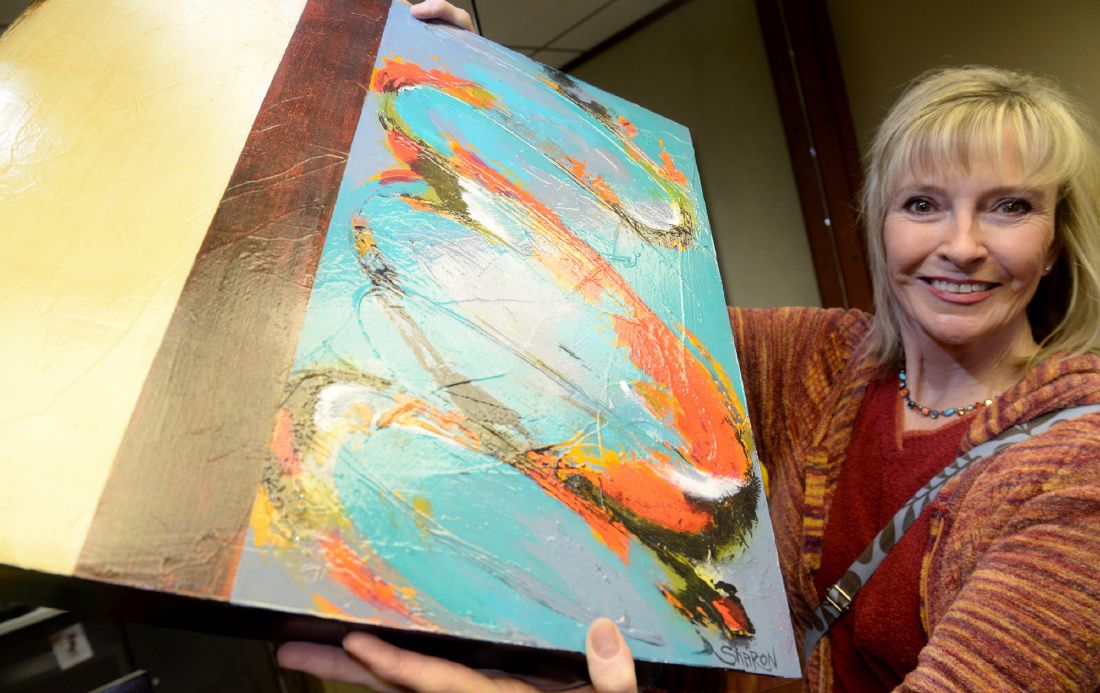 Artist Sharon Grimes painted a large mural and five smaller pieces, such as this one, for Regions Bank in downtown Longview. 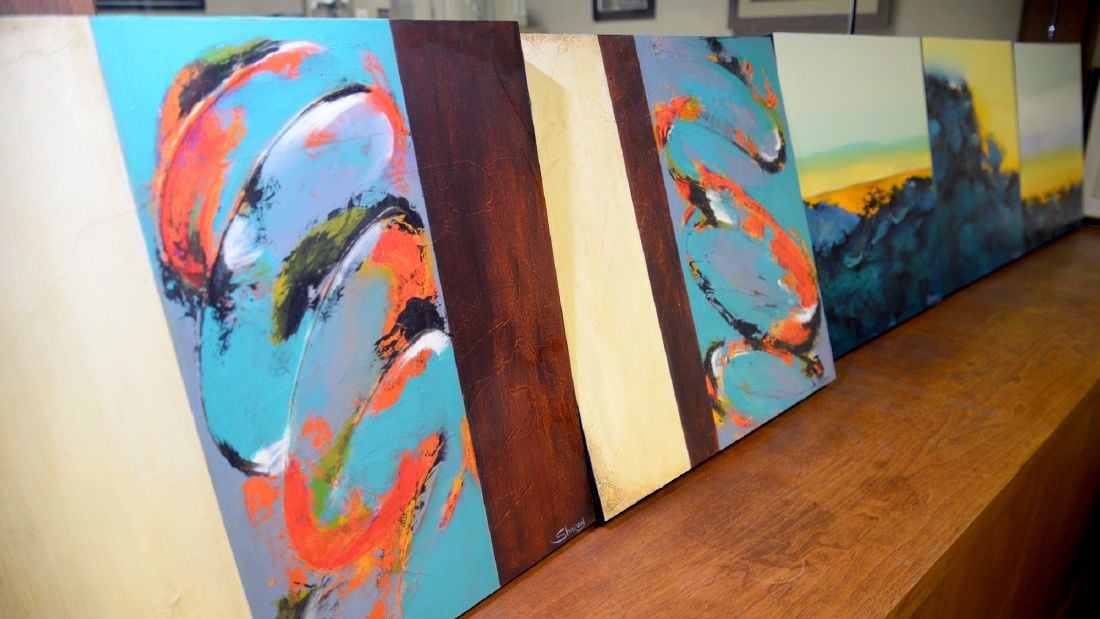 Grimes was commissioned to create abstract pieces that are displayed at Regions Bank. She painted one large and five smaller pieces. 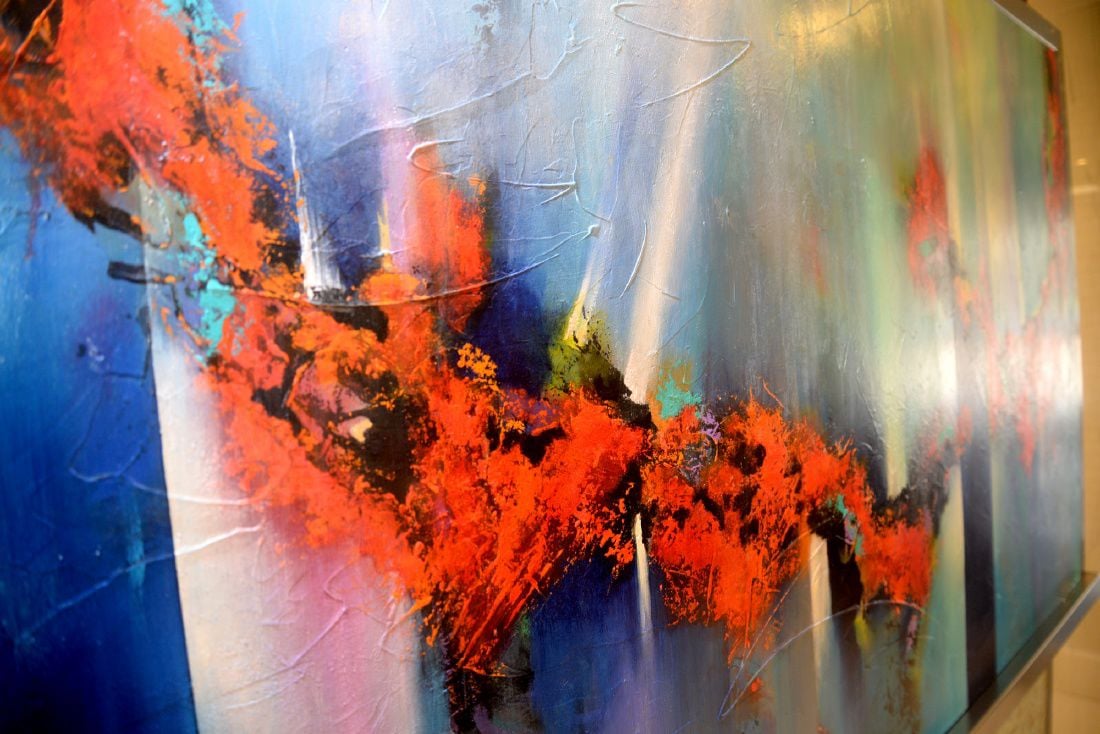 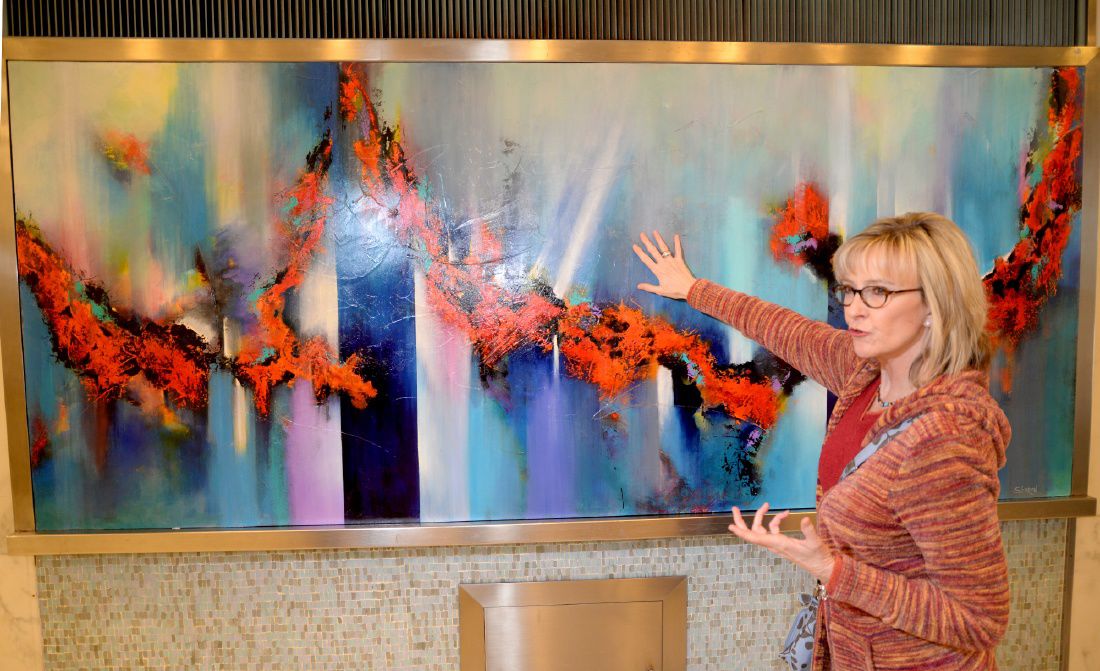 Sharon Grimes talks about an abstract painting Wednesday that she was commissioned to make for the Regions Bank building in downtown Longview.

Sharon Grimes shows the large abstract piece Wednesday that she was commissioned to paint at the Regions Bank Building in downtown Longview.

Artist Sharon Grimes painted a large mural and five smaller pieces, such as this one, for Regions Bank in downtown Longview.

Grimes was commissioned to create abstract pieces that are displayed at Regions Bank. She painted one large and five smaller pieces.

Sharon Grimes talks about an abstract painting Wednesday that she was commissioned to make for the Regions Bank building in downtown Longview.

If abstract art is about communicating a certain mood or a particular thought, then Sharon Grimes' work at the Regions Bank building in downtown Longview should inspire excitement about the local art scene.

At least, that's what Grimes, along with building owner Roger Johnson, hope.

About three months ago, Johnson of Texas Office Leasing commissioned Grimes to paint one large abstract and five smaller pieces for public areas in the building.

The first and largest piece is carefully crafted on a cradled wood panel, a custom-made piece reinforced with wooden slats on the back to help preserve the flat paint surface.

It hangs in the lobby vestibule facing Bank Street, in what used to be an old teller window.

Framed by the original stainless steel window, Grimes' creation looks organic to the space, while brightening up the lobby and complementing the native colors, which feature lilac, robin's egg blue and olive ceramic tiles.

The approximately 9-foot by 4-foot panel is awash with color, layers of vibrant blues and turquoise accented by bold splashes of orange and deep tones of black.

Grimes begins by layering gesso, a textural element, over the wood.

"It gives the surface texture and movement," she said.

Then, working in acrylics, she added paint in layers, driven by the work itself.

"The painting dictates what I'll do next," Grimes said.

Johnson didn't give her much direction with the painting.

"You never give an artist direction; that defeats what they do," he said, laughing.

Grimes began with the general design in her mind, letting her imagination and vision help disperse the paint on the wooden canvas.

A light blue went on first ("All acrylic paints are transparent, even the opaque ones," she said.)

Then she added some darker colors.

"I use black sometimes, which not a lot of artists do; it's a little bit unusual, but I do it to establish the design," Grimes said, pointing to a well-defined area of the painting.

She adds layers until she has the finished product.

The artwork in the lobby doesn't have a title, although if the piece were for sale, she would have given it a name.

Grimes has been painting for about 25 years, full time for the past three years since retiring as a hairdresser.

Grimes was a featured regional artist at the Longview Museum of Fine Arts exhibit over the summer and a finalist for the Hunting Art Prize, a prestigious annual, national competition open to established artists, talented newcomers and promising amateurs, according to the organization's website.

She started working in charcoal and pencils, sketching whenever she found spare time, learning and working with more mediums as she progressed.

Inspired by the likes of others such as area artist Cheryl McClure, and Albuquerque, New Mexico, abstract artist Cody Hooper, with whom she studies twice a year, Grimes also created a triptych (a series of three paintings) and a diptych (two paintings) to hang against an ochre colored granite in an upstairs hallway of the building.

"Sharon and I were interested in trying to introduce more art into the commercial community," Johnson said this past week. "We wanted to introduce local artists to the community and to have the observer of local art in the downtown area understand and appreciate what we have here in Longview."

The Regions Bank building was built in 1912 and was the site of Guaranty State Bank of Longview. It later became Rembert National Bank, Texas Commerce Bank and Longview National Bank before being bought by Regions Bank.

The total salaries for the month at the bank in 1912 were $125. The night watchman made $1 a month, and attorneys fees were $1.50 per month. The electric bill for the building cost the bank $3.65 per month, according to Johnson.

The current art deco style of the bank and the mosaic mural in the main room were products of a 1960s renovation, according to Johnson.

The new abstract art is another attempt to modernize the space while paying homage to the history of the building. Part of the original bank is hidden behind new walls in the southeast corner, Johnson said.

"I want this art to put a smile on people's faces when they walk into the building," Johnson said.

"You never give an artist direction; that defeats what they do."Roger JohnsonCommissioned art for Regions Bank building in downtown Longview