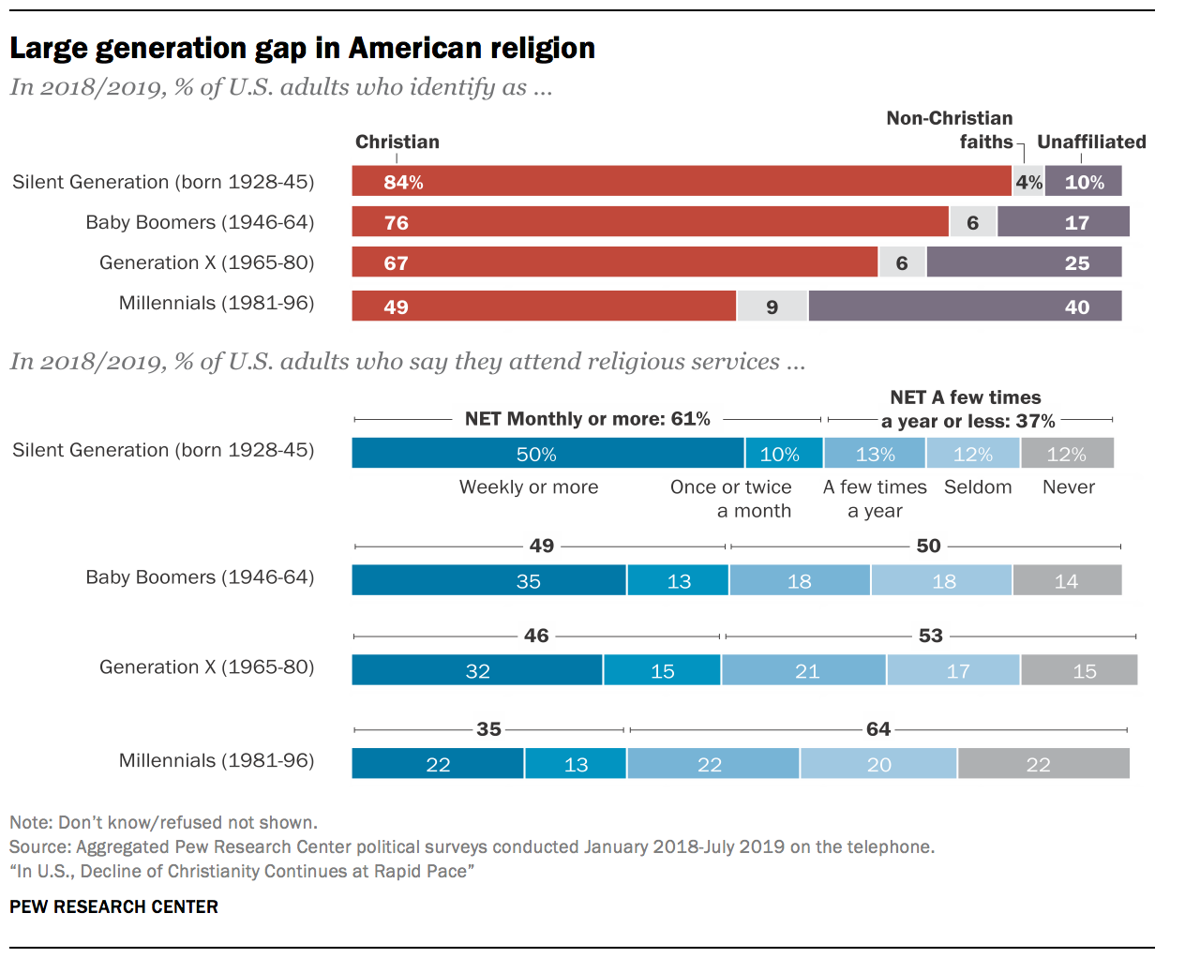 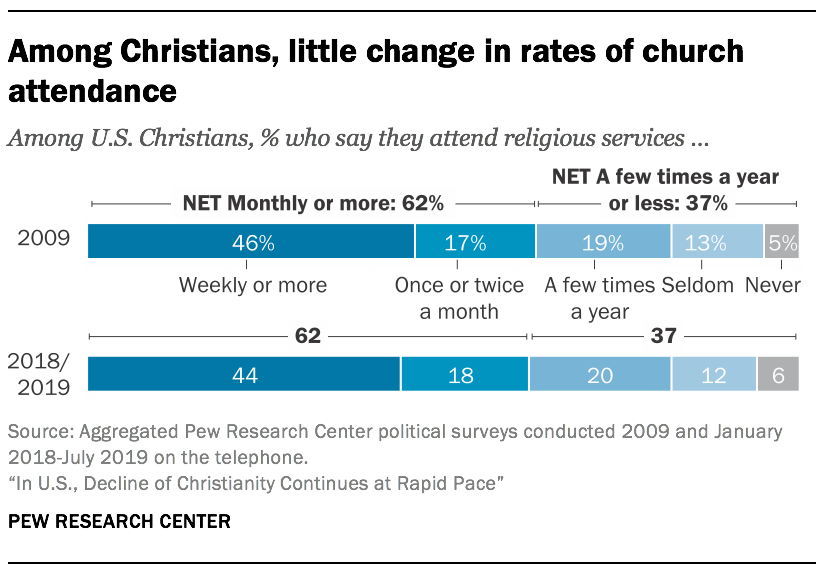 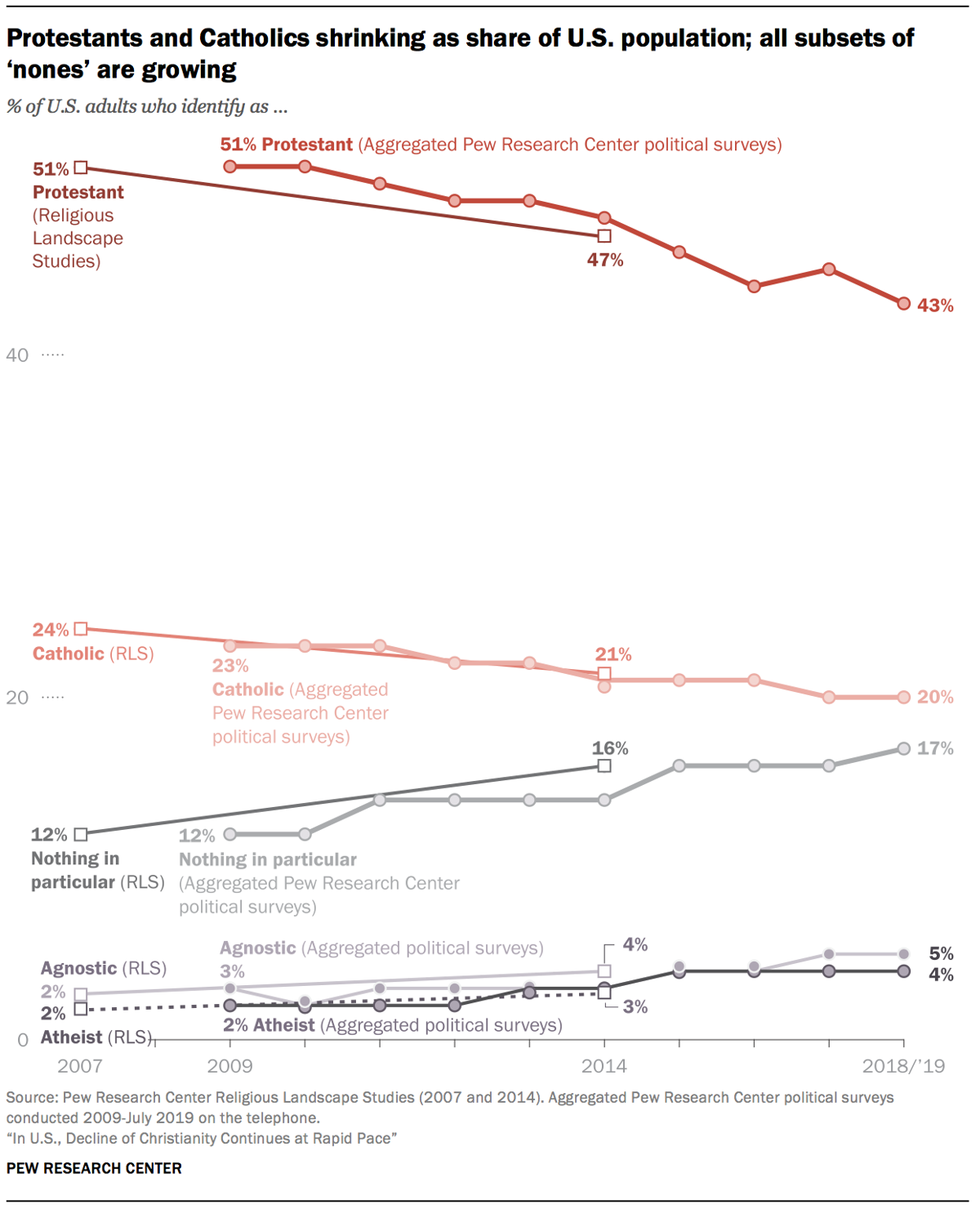 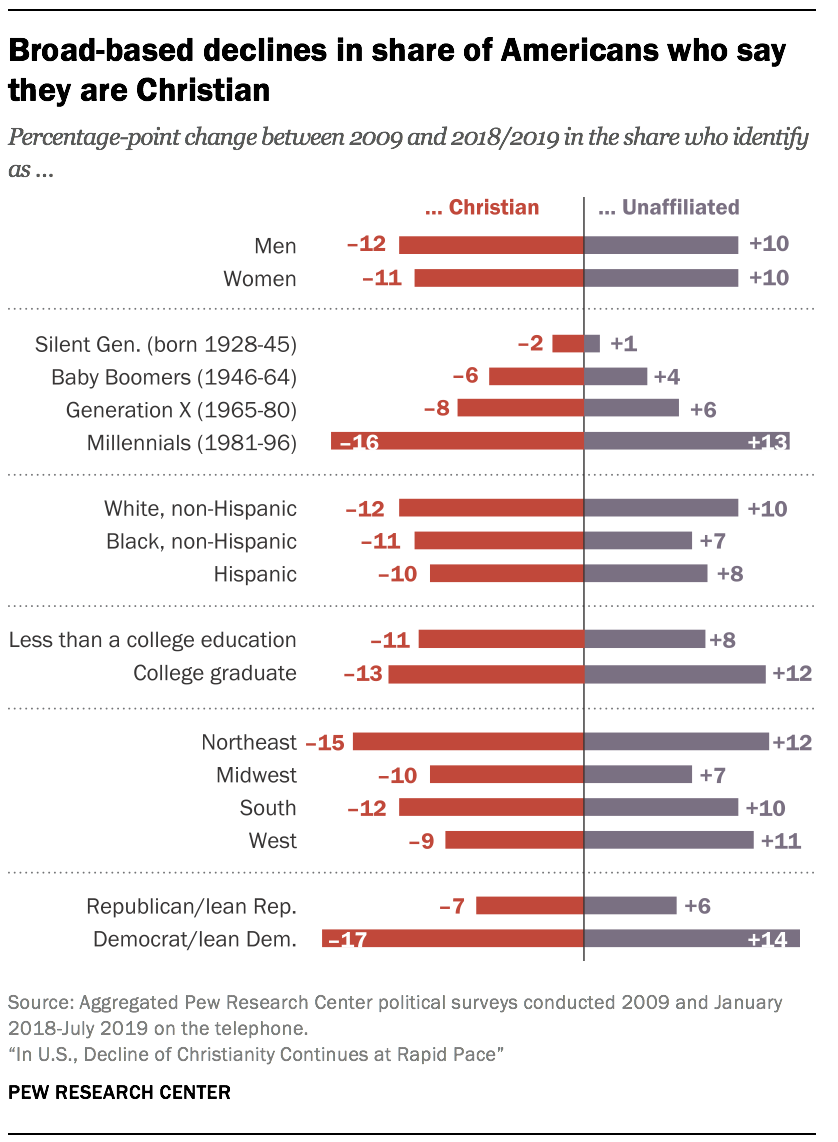 The United States is steadily becoming less Christian and the portion of Americans with no religion is rising.

Those are the twin headlines from a new report from the Pew Research Center, which shows a dramatic decline in American religious habits over the past decade.

Based on telephone surveys conducted in 2018 and 2019, Pew said Thursday that 65% of American adults now describe themselves as Christian, down from 77% in 2009. Meanwhile, the portion that describes their religious identity as atheist, agnostic or “nothing in particular,” stands at 26%, up from 17% in 2009.

“The rate at which Christians are declining is very striking,” said Greg Smith, associate director of research at Pew. “And the share of Americans who have no religion is growing very rapidly, which is just as striking.”

Pew says all categories of the religiously unaffiliated population — often referred to as the “nones” — grew in magnitude. Self-described atheists now account for 4% of U.S. adults, up from 2% in 2009; agnostics account for 5%, up from 3% a decade ago; and 17% of Americans now describe their religion as “nothing in particular,” up from 12% in 2009.

The report comes at a challenging time for many major denominations in the U.S. The two largest — the Catholic church and the Southern Baptist Convention — are beset by clergy sex-abuse scandals. The United Methodist Church, the largest mainline Protestant denomination, faces a possible split over differences on inclusion of LGBTQ people.

Pew also found a steady decline in the rates of attendance at religious services. Over the past decade, the share of Americans who say they attend services at least once or twice a month dropped by 7 percentage points, while the share who say they attend less often, if at all, rose by the same degree.

While overall church attendance is down, 62% of Christians say they attend services once a month or more — about the same as a decade ago.

Thumma pointed to a number of cultural factors that may be speeding the generational shift, including less social pressure to go to church; the clergy sexual abuse scandal, especially in the Catholic Church; and shifting attitudes toward sexuality and gender that clash with traditional Christian teachings.

Smith, the Pew researcher, said a dissatisfaction with conservative political ties to evangelical Christianity may also be fueling the growth of the nones.

“We know religious nones are among the most strongly and consistently Democratic and politically liberal groups in the population,” he said. “We know that in the 2016 election, 68% of nones voted for Hillary Clinton over Donald Trump. We also saw that two-thirds of religiously unaffiliated voters identify with or lean toward the Democratic Party.”

Hemant Mehta, the blogger behind the Friendly Atheist, said it’s not that nones are embracing atheism necessarily. Instead, they may be rebelling against the link between conservative religion and politics.

“They had plenty of opportunity to take the ethical route: Do the nice, kind, decent thing,” Mehta said. “What do the most powerful voices do? They cover up sexual abuse. They became allies with Donald Trump. When you see what they’re doing and who they’re hanging out with, why would anyone want to be part of that club?”

The report also showed a slower decline among black and Hispanic Americans. Both groups are more likely to describe themselves as Christians and to attend religious services. Among African-Americans, 58% say they attend church more than once a month compared to 42% of whites, and 51% of Hispanics said the same.

Other trends documented in the new survey:

The trends documented by Pew have been reflected in other recent developments.

In May, the Southern Baptist Convention reported its twelfth year of declining membership. The SBC said it had 14.8 million members in 2018, down about 192,000 from the previous year.

In June, the annual Giving USA report — a comprehensive overview of Americans’ charitable giving patterns — said giving to religious institutions had been lagging behind other philanthropic sectors for several years. Reasons included declining attendance at worship services and a rising number of Americans not affiliated with any religion.

Empty Tomb, a Christian organization based in Champaign, Illinois, that researches religious giving, says the decline is longstanding. According to its research, Americans gave about 3% of their disposable income to churches in 1968, and less than 2.2% in 2016.

The report is based on annual political surveys taken over the phone with a sample size of 12,000 to 25,000 people each. The margin of error for the full sample was between 0.7 and 1 percentage point.

— This story includes information from Religion News Service, The Associated Press and the Pew Research Center.