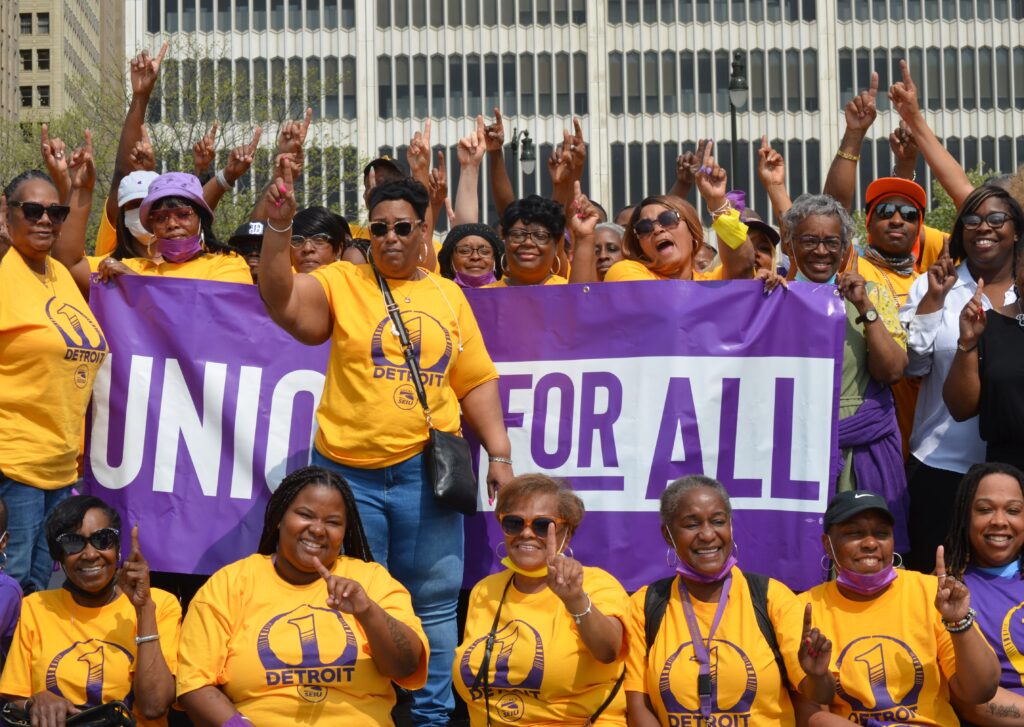 There, they chanted about their demand for a wage increase: “If we don’t get it, shut it down!”

Currently, janitors in downtown Detroit buildings work on hourly wages ranging between $11.25 and $15.30, according to the union. In recent years, they have fought for increased wages.

“For the past two years, Local 1 janitors have been putting their health at risk to keep Detroit running throughout the pandemic — for commercial buildings to public schools to airports,” said SEIU Local 1 Vice President Pam Owens. “Today, from RenCen to Bedrock, Detroit janitors are coming back to the table to fight for a One Detroit that works for all of us.”

The contract covers 1,700 janitors in Southeast Michigan and is set to expire July 31. The workers service a variety of buildings in the region, including Detroit Metropolitan Wayne County Airport, Ford World Headquarters, and Detroit’s First National Building, Renaissance Center and Wayne County’s Guardian Building as well as the Southfield Tower Center in Southfield. “It is time for us to do for you, what you have done for us,” said Young about the essential workers nature of many janitorial positions. “You have redefined the definition of hero because you nearly put your life on the line for us.”

Bell, who is Wayne County Commission chair, also offered words of support to the rallying workers.

“They do the hard work and it’s always good to support them,” said Bell.

A call to Ford World Headquarters, where some SEIU janitors work, was not returned.

Carla Anderson, a SEIU Local 1 Executive Board member and a Detroit janitor for 34 years said her co-workers will “fight for what we deserve” at the bargaining table.

“We janitors showed up through the pandemic, through the revitalization of Detroit, and now we are showing up to the bargaining table to demand wages and benefits that reflect our hard work,” she said.

Originally published on michiganadvance.com, part of the TownNews Content Exchange.