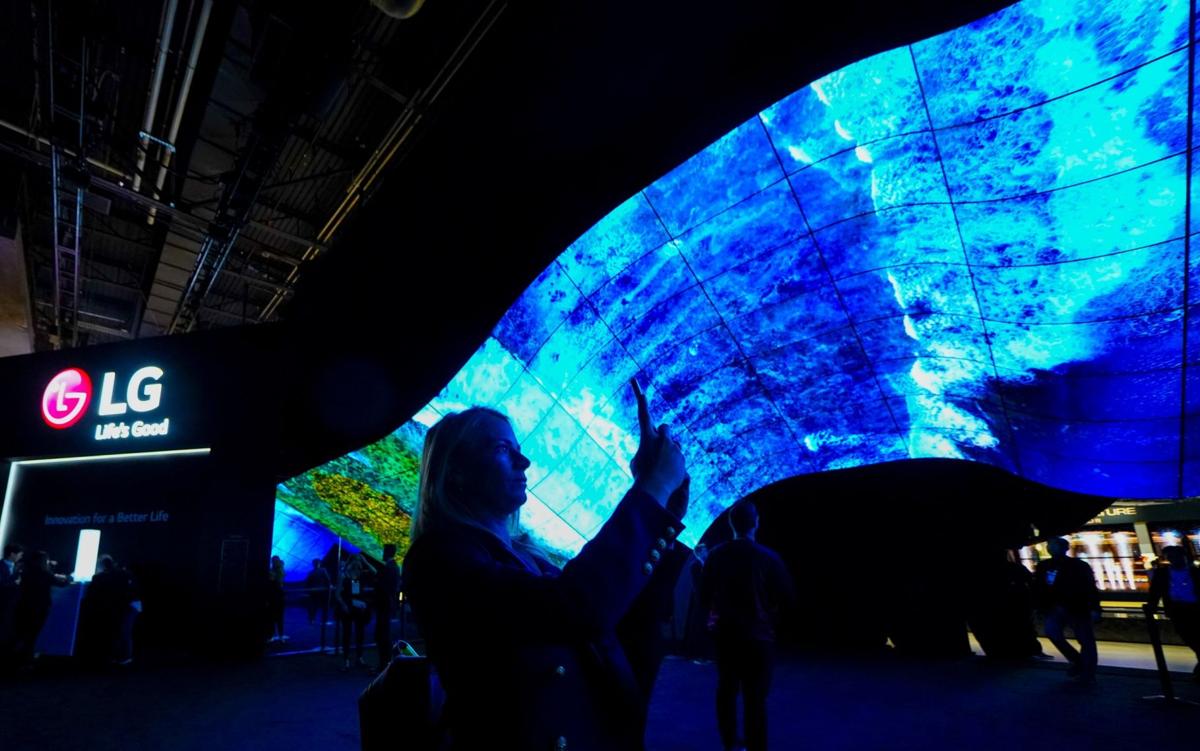 Onlookers under Wave, by LG Electronics, which is comprised of 200 screens, many of which are curved. 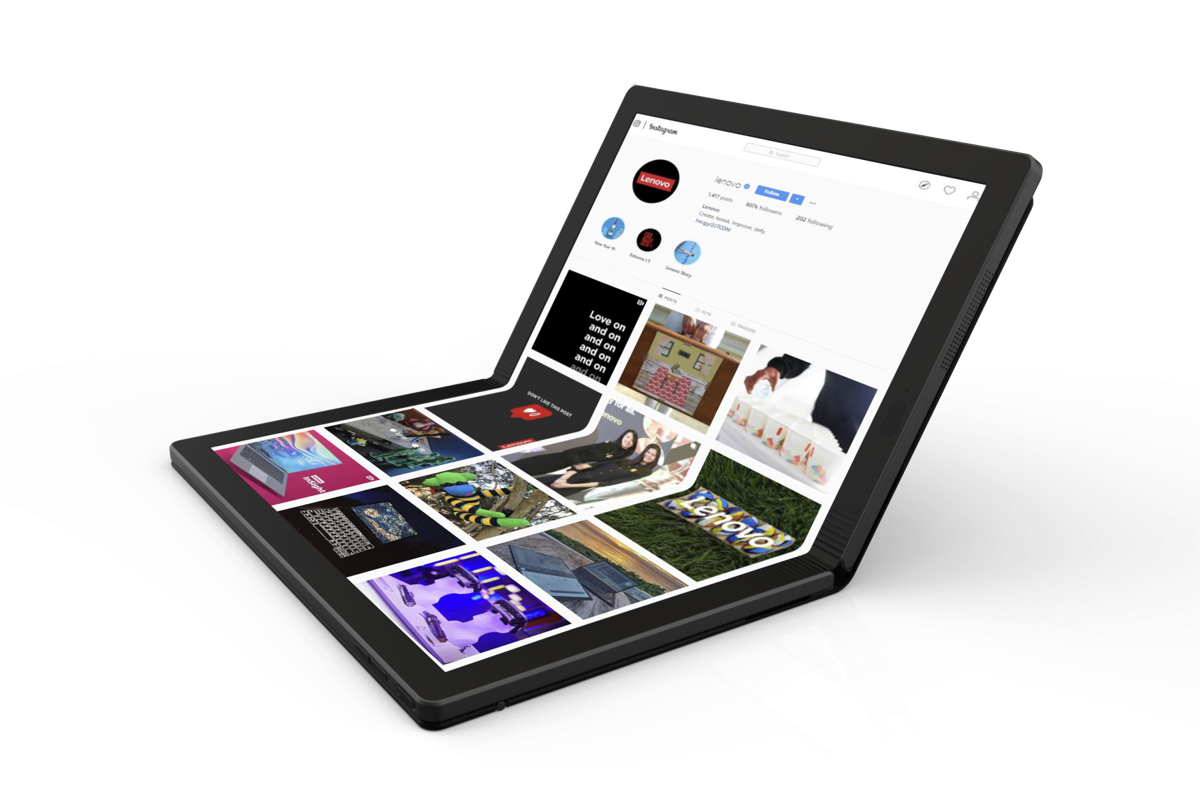 The Pampers Lumi connected diaper is on display Sunday during a Procter & Gamble news conference before CES International in Las Vegas.

The Volvo XC40 Recharge, is the first vehicle to offer Android Automotive OS and its suite of Google services integrated into the connected services system.

Hyun-Suk Kim, president and CEO of the Consumer Electronics Division at Samsung, holds Ballie, an AI rolling robot during a Samsung keynote before the CES tech show, Monday, Jan. 6, 2020, in Las Vegas.

Onlookers under Wave, by LG Electronics, which is comprised of 200 screens, many of which are curved.

The Pampers Lumi connected diaper is on display Sunday during a Procter & Gamble news conference before CES International in Las Vegas.

The Volvo XC40 Recharge, is the first vehicle to offer Android Automotive OS and its suite of Google services integrated into the connected services system.

Hyun-Suk Kim, president and CEO of the Consumer Electronics Division at Samsung, holds Ballie, an AI rolling robot during a Samsung keynote before the CES tech show, Monday, Jan. 6, 2020, in Las Vegas.

LAS VEGAS — Like it or not, the future is connected.

Your next car will probably connect to the internet. So will your TV and doorknobs. One day, you may even adopt a robot companion capable of analyzing its environment and reacting to your actions in real time.

That future, or at least a glimmer of it, was on display at CES, the giant consumer electronics trade show that attracted more than 170,000 attendees here last week.

This year’s annual event — the first one took place in 1967 — featured more than 4,500 exhibitors, including tech companies big and small from all over the world, and sprawled across 2.9 million square feet at the Las Vegas Convention Center, the Wynn casino, the Venetian and a handful of other venues around town.

The conference was a window into where the industry is pouring huge amounts of resources and investment, hoping that the year’s hottest tech trends — like artificially intelligent virtual assistants, connected cars and foldable screens — will become everyday fixtures in our lives.

The enormous conference was also an opportunity for tech observers to make predictions about the innovations that might become popular and the gadgets that will probably flop in the coming years.

Among the questionable tech trends were foldable screens, demonstrated by TCL, Lenovo and Dell, among others. Lenovo showed its ThinkPad X1 Fold, a Windows foldable tablet. Unfolded, it measured about 13 diagonal inches, and folded up, it looked compact like a book.

That may sound neat, but not everyone is optimistic about foldable screens. Frank Gillett, a technology analyst for Forrester Research, predicted that foldable devices would be unpopular, largely because of their high price tags and limited use cases.

Case in point: Samsung’s Galaxy Fold, its first foldable smartphone priced at nearly $2,000, was a failure after early reports of the device breaking after light use. Lenovo’s X1 Fold will cost about $2,500 when it arrives this year.

“Foldables — the pun is too tempting — will be a flop,” Gillett said.

Amazon and Google were among the biggest players at CES, each boasting about how awesome their personal assistants were.

Google said its virtual assistant is now used by more than 500 million people a month across more than 90 countries.

Last year, Amazon’s Alexa-powered Echo speakers dominated the global smart speaker market with about a 25% share, ahead of Baidu and Google, according to Canalys, a research firm. And the market for smart speakers keeps growing.

It is still unclear, however, whether consumers want to do much with virtual assistants as they continue to get smarter. Studies have shown that people mostly use Alexa and Google Assistant for basic tasks like playing music and checking the weather. Paying for gas (which Amazon wants you to do) sounds like a stretch.

Still, Dave Limp, Amazon’s head of hardware devices, was bullish. He said that even if Alexa users only occasionally used the assistant’s more advanced capabilities, that was still significant.

“Customers interact with Alexa billions of times a week,” he said. “Even one of many things that they’re doing can add up to be a pretty big thing.”

Samsung showed a car equipped with its Exynos Auto V9 computing processor, which can run applications on multiple screens and pull information from up to 12 cameras. The system was designed to simultaneously provide entertainment like videos to passengers in the back seat while providing safety-assistance apps to drivers, the company said.

Amazon also showed off its automotive prowess, displaying cars from Lamborghini and the auto startup Rivian that now include Alexa personal-assistant capabilities.

New auto safety features may ultimately prove to be the most practical and useful things to come out of CES this year.

Safety-assistance apps that alert drivers to vehicles in their blind spots or help them park automatically should be a boon to consumers, said Carolina Milanesi, a technology analyst for Creative Strategies.

“We’re looking more at talking about safety and saving lives versus, ‘It’s super cool, your car comes to you when you call it,’” Milanesi said.