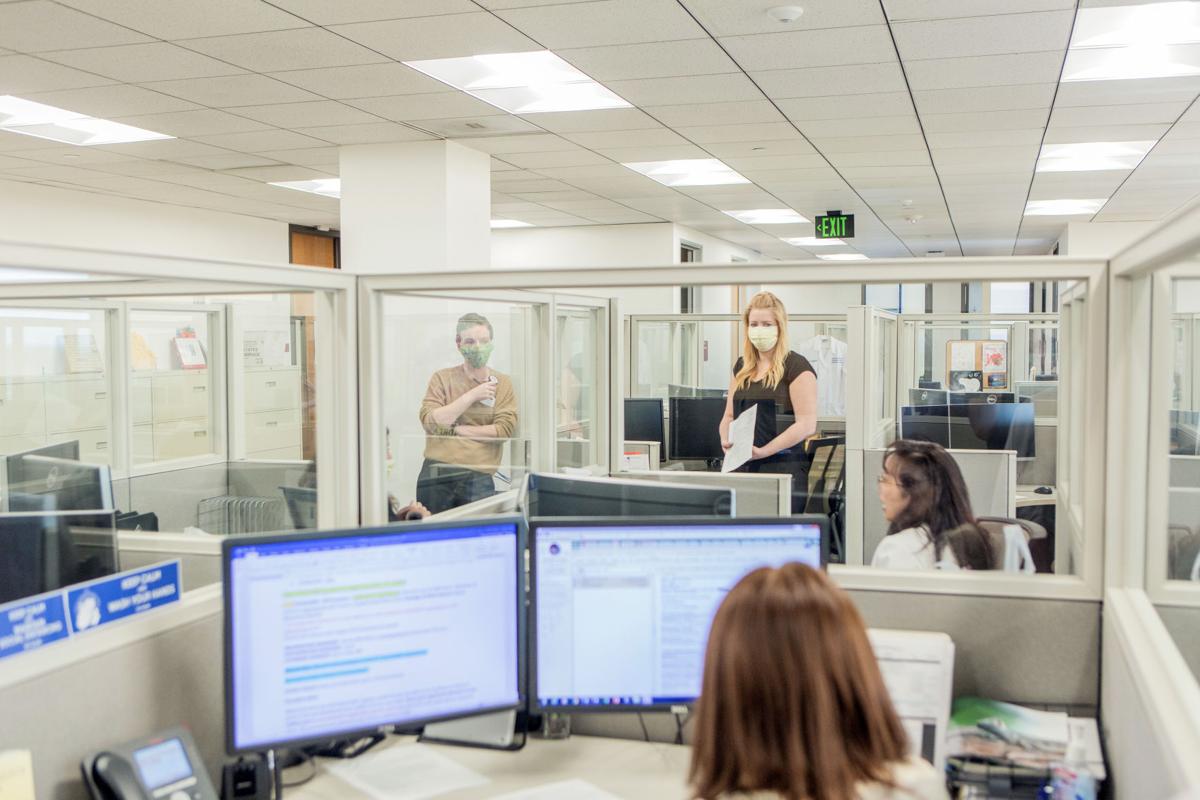 An office with protective barriers between cubicles and social distancing in place in Orange, Calif. Companies around the country are preparing elaborate new routines intended to keep their employees healthy.

A screen shot of Cisco’s new smartphone app for employees.

An office with protective barriers between cubicles and social distancing in place in Orange, Calif. Companies around the country are preparing elaborate new routines intended to keep their employees healthy.

A screen shot of Cisco’s new smartphone app for employees.

Here’s what it will be like when employees at Cisco, the American telecommunications equipment maker, return to the office:

Before heading in each day, workers will be required to log on to a new app the company designed and answer several questions about their health. Have they had close contact in the last 14 days with anyone who has received a COVID-19 diagnosis or is suspected of having a coronavirus infection? Within the past 24 hours have they experienced chills, shortness of breath or a loss of taste or smell?

If they report themselves to be healthy, the app gives them a green screen that reads “Pass.” If not, the app flashes red and reads, “Do not come to the worksite.”

Those who are cleared to go into the office will be stopped in the lobby. There, they will have to show the all-clear screen from their app. After that, they will walk through a thermal screener temperature check. Anyone with a fever will be sent home. Those without one can get to work.

Now that the Centers for Disease Control and Prevention has recommended sweeping changes to offices in the U.S., companies around the country are preparing elaborate new routines intended to keep their employees healthy. In many cases, the changes will transform workaday offices into fortified sites resembling biohazard labs.

“It’s going to be a very different experience in the office,” said Fran Katsoudas, Cisco’s chief people officer. “It is going to take a lot of work, but it can be done.”

Simply complying with the CDC suggestions will present major hurdles for many companies, especially those in skyscrapers and dense urban centers.

Amalgamated Bank, which has offices in New York and Washington, D.C., has decided that the earliest it will bring office workers back is September and is still “digesting” the CDC recommendations.

“We wanted to make sure we give ourselves enough time for proper planning,” said Edgar Romney, an Amalgamated executive running the bank’s return-to-work task force. “There’s a lot of information about what you should be doing, but there are a lot of questions about how you should be doing it.”

For example, the CDC recommends limiting elevator use to maintain social distancing of 6 feet. Amalgamated, which leases space in crowded office buildings, shares elevators with many other tenants.

“We have to understand what building management’s plan is going to be,” Romney said. “What are they doing about elevators?”

Even at companies that occupy entire buildings, elevators are a vexing problem.

“It can’t be two people per elevator in a high rise,” said Rob Falzon, a vice chairman at Prudential, which occupies several large buildings in Newark, New Jersey. That wouldn’t be feasible: “It would take us two to three hours just to get everyone in.”

One possible solution? Prudential is considering putting ultraviolet lighting in elevators so surfaces are continuously disinfected.

Another CDC suggestion — that companies limit employees’ use of public transportation — is also impractical in cities like New York, where millions of people commuted to work that way before the pandemic.

“There are some real practical limitations to the guidance they’ve provided,” said Jim Underhill, chief executive of Cresa, a commercial real estate firm. “In dense urban environments, you can’t have everyone drive their car in alone. And in a 70-story high-rise, you can’t limit two people to the elevator.”

There are also real concerns about whether strictly following the CDC guidelines may strip offices of vibrancy.

“One of the biggest reasons for going back into the offices is so people can collaborate,” Underhill said. “But when the whole premise is to stay away from people and wear masks, it challenges the very reasons why people would be coming back.”

The CDC suggestions are likely to be met with varying levels of enthusiasm in different parts of the country. In interviews, executives said they expected efforts to promote sanitation and social distancing to differ by region and by the size of the office.

Willy Walker, chief executive of Walker & Dunlop, a commercial real estate financing firm, said managers of his 40 offices plan a wide variety of approaches to office life in the midst of a pandemic. In states like Texas or Florida, he said, everyone wants to go back to the office. In New York and California, employees are much more concerned about returning.

Walker & Dunlop is bringing back its first employees June 15, and those who return will find plexiglass barriers between some desks. Other desks will have been moved to face a wall rather than another desk.

Yet Walker said that with so many offices around the country, it would be hard to get everyone to follow the CDC suggestions.

“There are different social norms,” he said. “People are adhering to them or not as they want to.”

Moreover, some of the CDC suggestions may fly in the face of human nature. The guidelines call for an end to handshakes, hugs and fist bumps. They encourage masks to be worn at all times, even in meetings. That could make it difficult for employees to collaborate.

“Coming back is for social interaction and collaboration,” Falzon said. “If people have to stay 6 feet apart and have to wear masks, why are we bringing them back?”

Even if there is a vaccine and the threat of the coronavirus is eliminated, Falzon said, he expects fewer than 70% of Prudential employees to return to the office.

Most of Cisco’s roughly 75,000 employees have been working remotely for the past few months, and Katsoudas said the company would bring back office workers slowly. Those that do will find their work lives transformed.

The phones in many Cisco common areas will be gone. Conference rooms will be sanitized after each use. Engineers who previously huddled over hardware prototypes will work in shifts. And the open floor plans that had become hallmarks of the modern office are going to be scrapped, with desks repositioned farther apart.

“All of those amazing open spaces that we created?” Katsoudas said. “We’re now going to have reconfigure them.”

Even then, adhering to the CDC guidelines will be a challenge.

“We are human beings at the end of the day,” Underhill said. “We are not robots.”