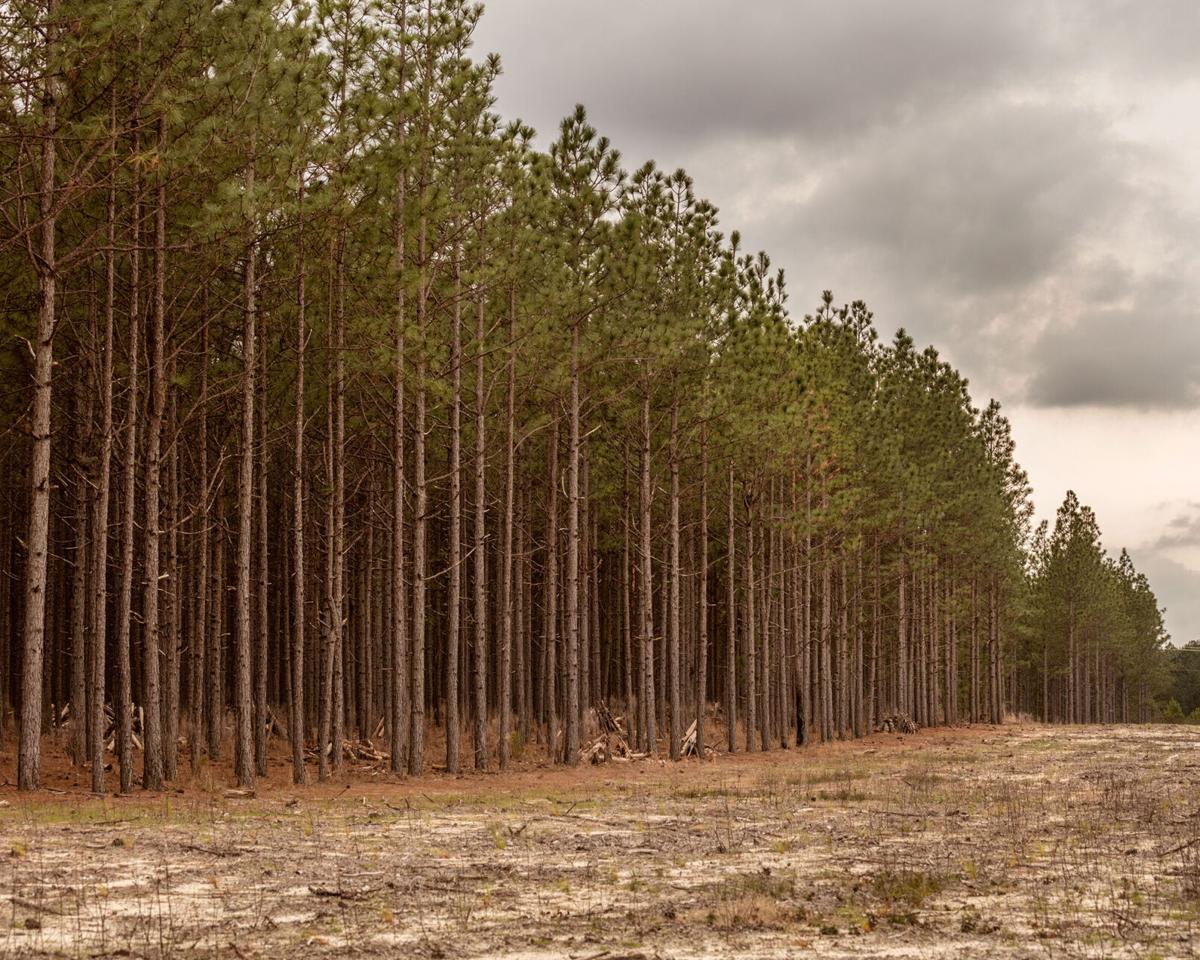 Mike Wilson’s longleaf pine stands produce up to 170,000 bales of pine straw a year, harvested mostly by hand, for use as high-end mulch. 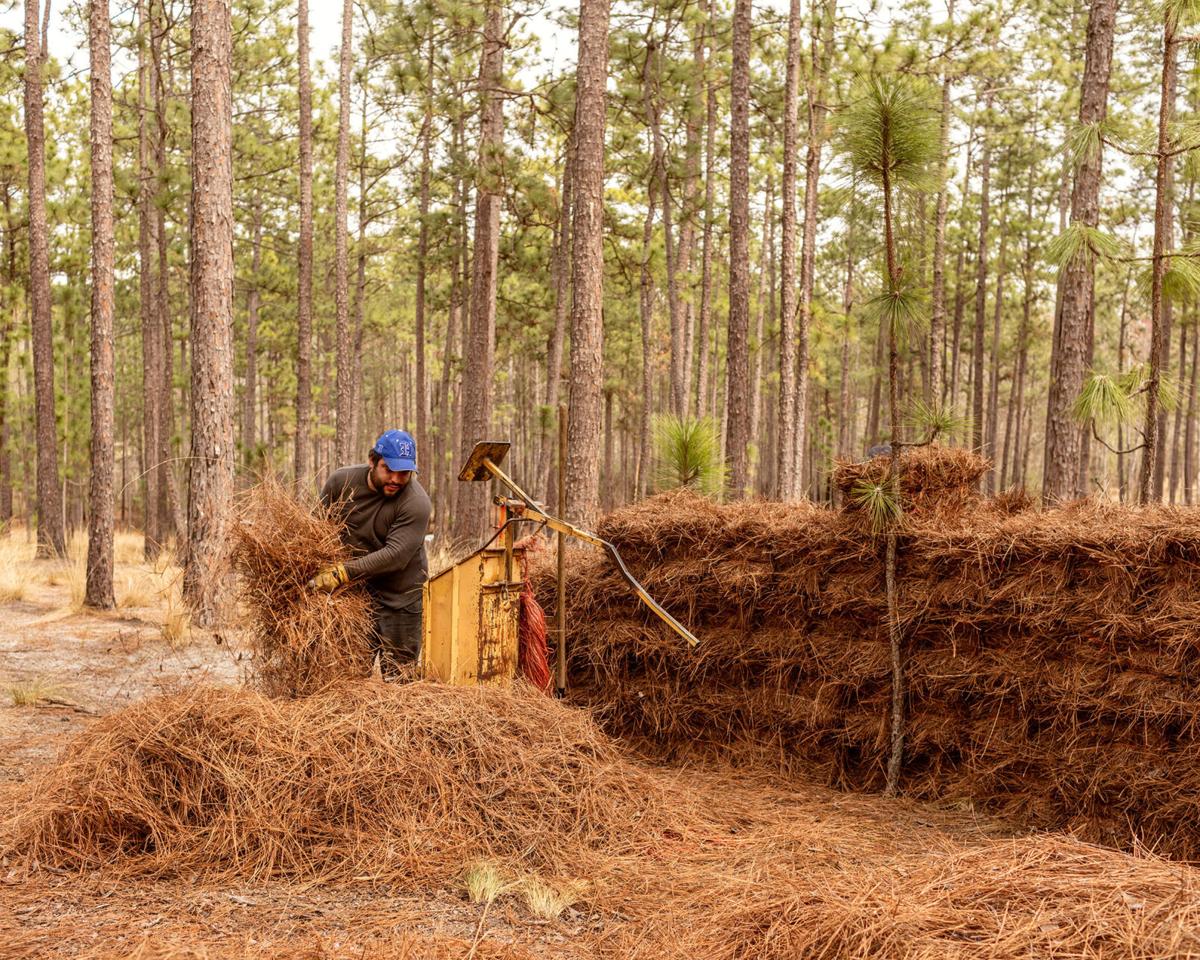 A worker loads pine needles into a baler at Mike Wilson’s farm in West End, N.C. 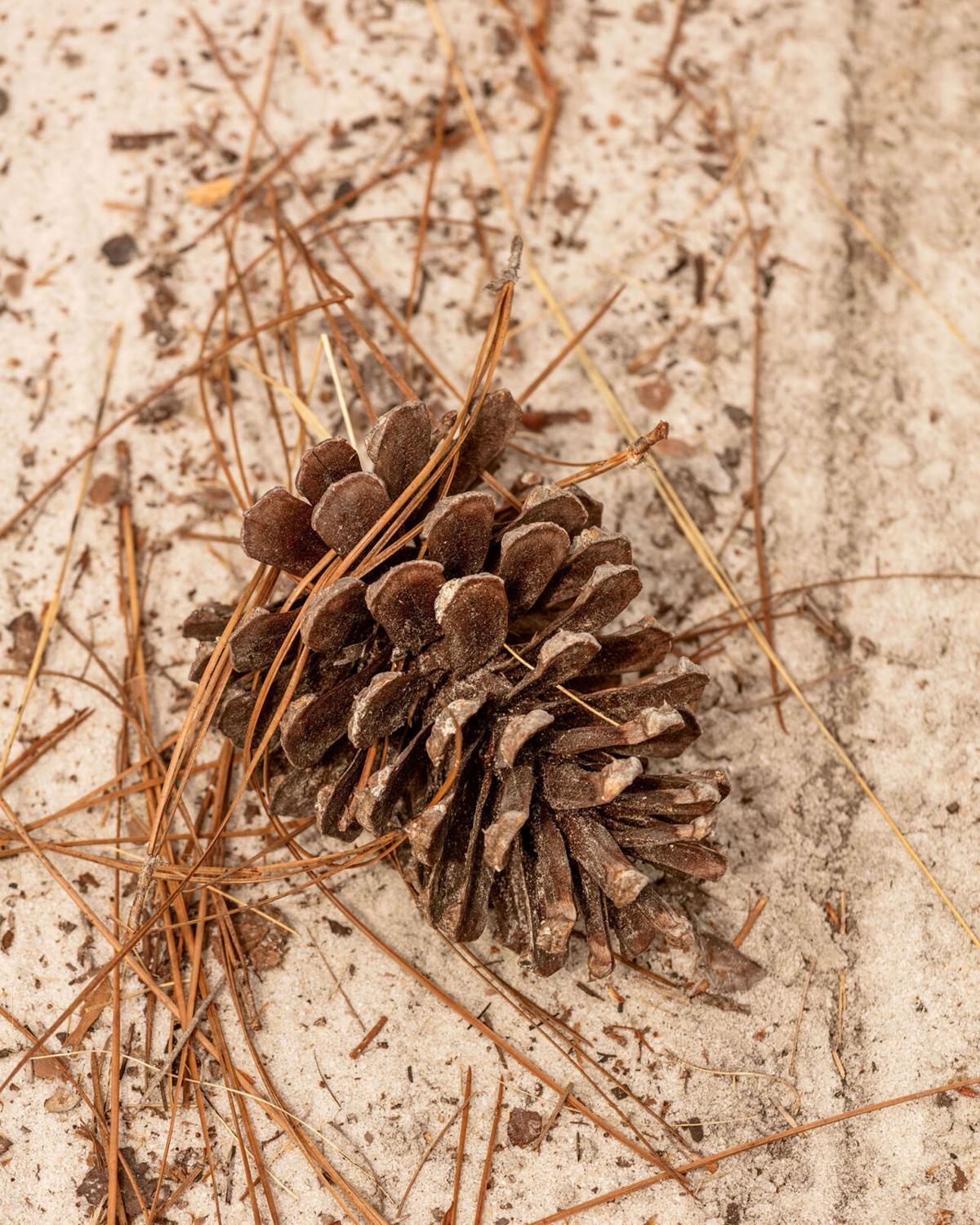 Before valuable pine needles can be raked and baled, pine cones must be picked up off the forest floor. 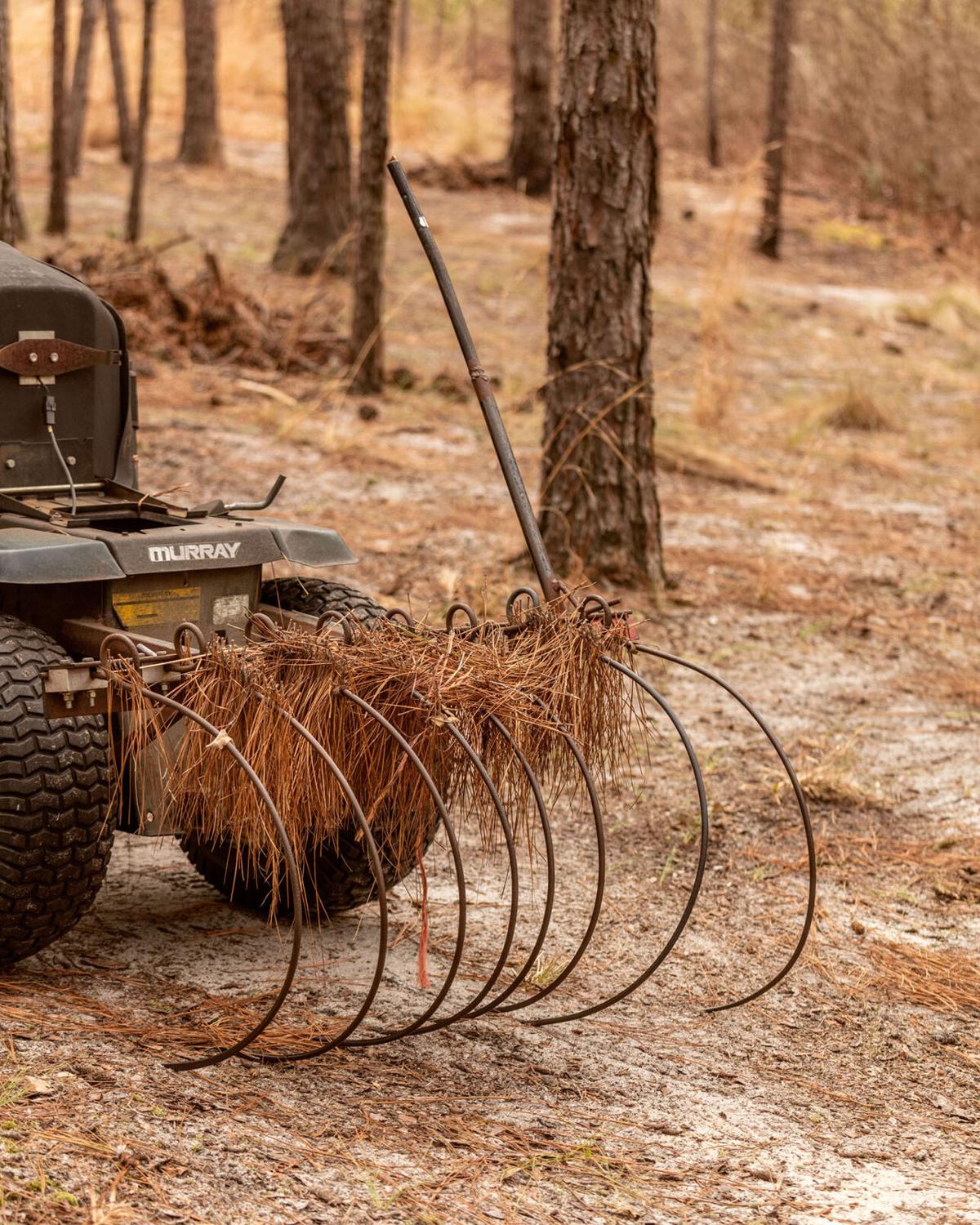 A small tractor is used to rake the sandy forest floor for pine needles at Mike Wilson’s farm in West End, N.C. 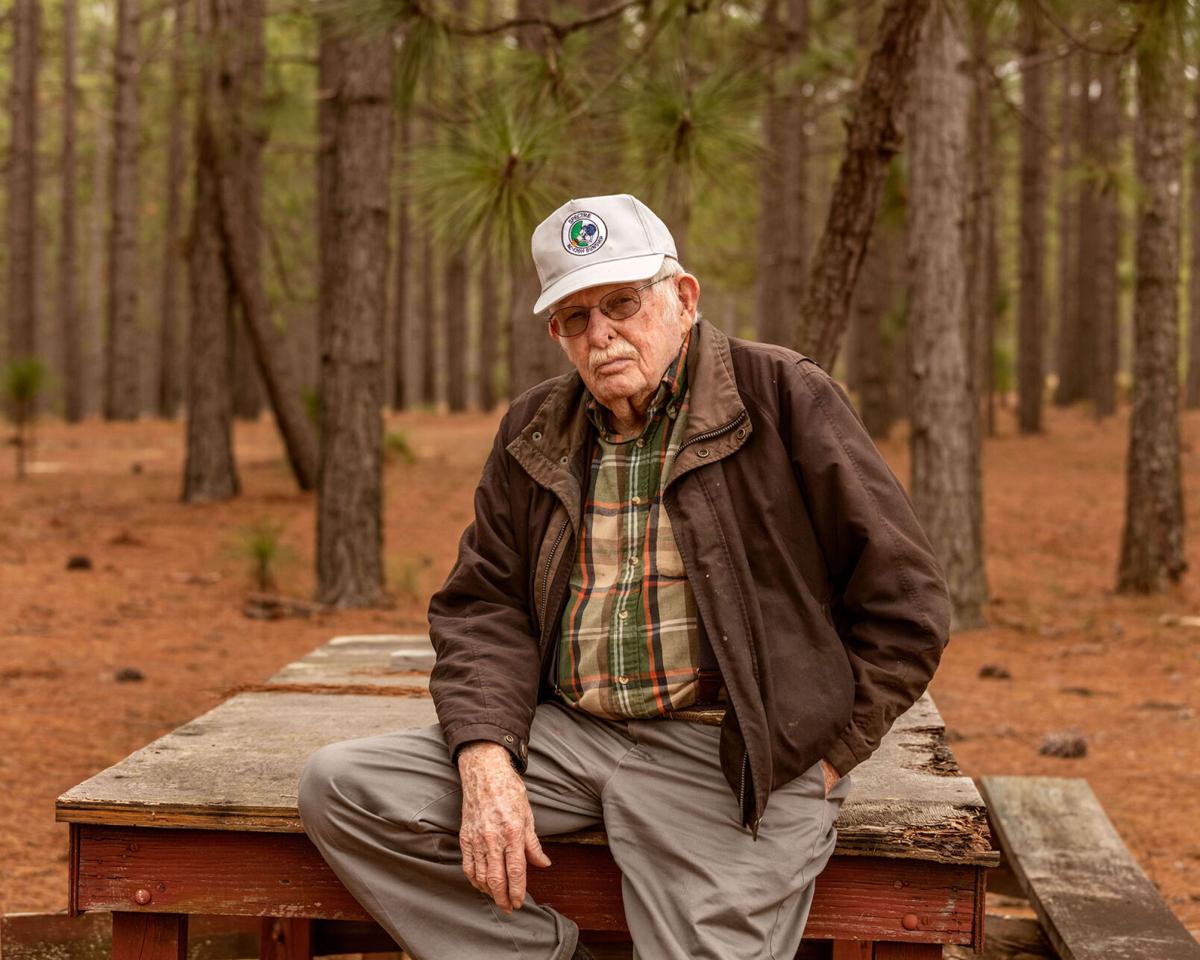 Mike Wilson leans on a picnic table on his pine needle farm in West End, N.C.

Mike Wilson’s longleaf pine stands produce up to 170,000 bales of pine straw a year, harvested mostly by hand, for use as high-end mulch.

A worker loads pine needles into a baler at Mike Wilson’s farm in West End, N.C.

Before valuable pine needles can be raked and baled, pine cones must be picked up off the forest floor.

A small tractor is used to rake the sandy forest floor for pine needles at Mike Wilson’s farm in West End, N.C.

Mike Wilson leans on a picnic table on his pine needle farm in West End, N.C.

WEST END, N.C. — There is a saying among some farmers in the Carolina Sandhills: “A man would have to be a fool to cut down a longleaf pine.”

It’s not because the gangly-limbed tree is particularly beautiful. The pine doesn’t have a magnolia’s flowers or an oak’s shade. And it has nothing to do with the endangered red-cockaded woodpecker that calls the tree home. The longleaf pine’s most obvious attribute is its strong, straight timber — perfect for utility poles.

But the reason that longleaf pines are prized around here: their needles.

The dropped needles are in such demand that a lucrative business has grown up around raking, baling and selling them to landscapers and homeowners as mulch. Three varieties of pine needles are farmed, but the discarded debris of a longleaf pine is the most sought-after — and fetches the best price — because of its unusual length and high resin content, making it an attractive, water-retaining ground cover for gardens. Some even call it “brown gold.” And like anything valuable left just lying on the ground, theft is a problem. That’s why North Carolina made it a felony to steal pine needles.

It’s a case of one man’s trash being another man’s treasure — and, in this case, generating an estimated $200 million in annual sales across the Southeast. The pine straw industry, as it’s known, also helps preserve existing longleaf pine forests and supports the creation of new tree stands out of former tobacco fields and peach orchards. The bargain does have an ecological cost. Leaving the pine needles on the ground is ideal.

But increasingly there is support for conservation efforts that acknowledge nature can’t be locked away behind museum glass and allowing that some measured uses can offer protection, such as permitting cattle to graze on prairie lands to keep them open and free of woody vegetation.

“It shows a reasonable compromise between exploitive uses and conservation,” said Jeff Marcus, a scientist with the Nature Conservancy who works on the restoration of North Carolina’s longleaf pine ecosystem.

The ability to profit from pine needles has benefited longleaf pine forests that for decades have been decimated by logging and development.

“You can only sell the timber once. The pine needles come every year,” said Mike Wilson, who runs a pine straw operation here, two hours east of Charlotte.

The numbers just work out better, said Terry Bryant, who runs Pinestar Farms in nearby Carthage.

He could get $4,000 an acre for clear-cutting his mature longleaf pines for timber. Or, he said, he could earn $1,200 an acre collecting pine needles from the same trees — every year.

Farmers sell longleaf pine straw at roadside stalls. Garden stores stock it. Landscapers buy it in bulk. It’s more expensive than wood bark or chips. But it’s preferred as a ground cover because it doesn’t attract termites. Needles from slash and loblolly pine trees are also sold as pine straw. But the longleaf stands out.

One landscaper described his preference by telling Wilson, “I don’t do Bojangles,” referring to the fast-food chicken chain headquartered in North Carolina. Longleaf pine straw, as he saw it, was a higher-end product. It held its color. It was special.

Demand for pine straw has grown over the past two decades, closely following the rate of home building in the Carolinas, Georgia, Florida and part of Alabama, said Ernest David Dickens, a forestry professor at the University of Georgia who studies the pine straw market.

It’s also been a boon for farmers hoping to hold onto their land.

Wilson, 83, started planting longleaf pine on his family farm — set just a few miles from the famed golf courses at Pinehurst Resort — in the late 1970s. His father and grandfather grew peaches. But the entire crop could be ruined by the slightest changes in the weather. They also tried mining sand, taking advantage of the region’s unusual soil.

Wilson figured he could do better with trees. He now owns more than 750 acres of longleaf pines and leases more, producing up to 170,000 bales of pine straw a year.

The longleaf pine trees on his land are rooted in a mix of neat rows and wild scatter.

“Look at it through there,” Wilson said, driving a dirt road next to a messy thicket of his trees. “That’s all natural regeneration.”

Pine straw is not a quick way to make money. Longleaf pines take a decade to even start producing needles.

Collecting them is tricky.

It’s still done mostly by hand on Wilson’s farm. The needles are raked away from the base of the trees. A lawn tractor with a rake and backpack blowers can help. But a worker still fluffs the pine straw with a pitchfork to shake free any dirt and leaves. Pine cones need to be tossed aside. And the longleaf can produce pineapple-sized pine cones. The cleaned needles then are stuffed into a hand-baling machine, which presses the needles into a wire-bound rectangle.

“Labor is the biggest problem I have,” Wilson said.

His workers are paid by the bale. It’s tough, seasonal work. But they can earn $900 a week, Wilson said. He recalled one notably efficient worker who pulled in $1,400 a week.

As Wilson drove deeper into his property, he came upon Julio Santiago.

Santiago had worked for Wilson for several years. He stood under a thick canopy of longleaf pines, shaded from the afternoon heat. Mariachi music played from a cellphone propped up on a nearby limb. Surrounded by small hills of brown longleaf pine needles, he pushed handfuls into the baler. His wife stood nearby, using a pitchfork to prepare fresh piles for him to bale.

Each bale is worth just $3 to $5. But a trailer stacked with hundreds of bales is a target for thieves. Wilson said he still reminds his workers not leave too many bales sitting out overnight.

A rash of pine-straw thefts more than 20 years ago led Wilson and other pine straw farmers to press for protection. Law enforcement didn’t take the thefts seriously, Wilson said. It was just pine needles. Theft of personal property valued at less than $1,000 was a misdemeanor. But the pine straw farmers eventually persuaded state legislators to make it a felony to steal any amount of pine straw.

It might’ve helped that the longleaf pine is North Carolina’s official state tree.

“I think I got the first conviction under that law,” Wilson said.

The market for pine straw has reduced the pressure on landowners to sell longleaf pine for timber or sell out to developers, said Marcus, the scientist with The Nature Conservancy.

It’s helped with public lands, too.

Managers of the 33,000-acre Bladen Lakes State Park used to sell logging rights to its old longleaf pines to raise money to run the park.

Now they sell rights to the park’s pine straw instead. That’s allowed the number of mature pine trees to soar, a boost for birds needing old trees for nesting, such as the red-cockaded woodpecker.

It’s not unfettered nature, but it is something close.

“Marginal habitat,” Marcus said, “is better than no habitat.”