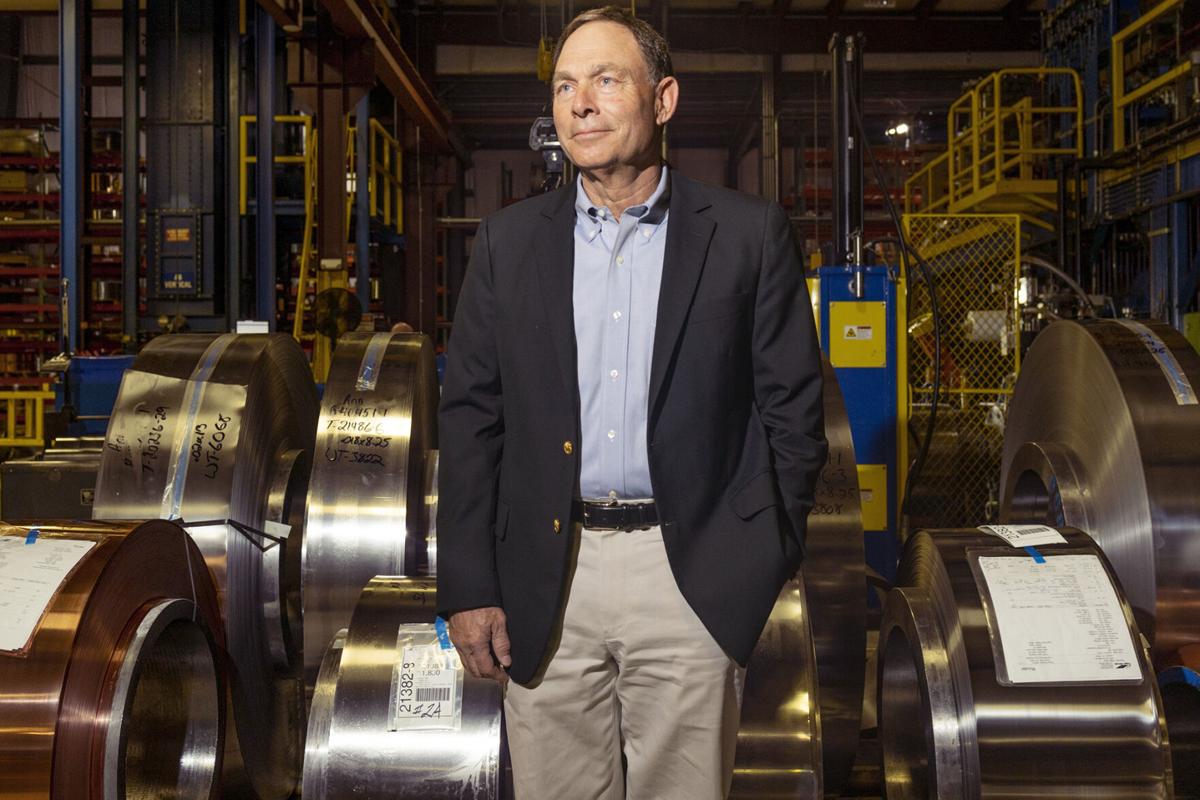 Charles Bernard, the president of Eagle Metals, looks on in Leesport, Pa. MUST CREDIT: photo for The Washington Post by Hannah Beier. 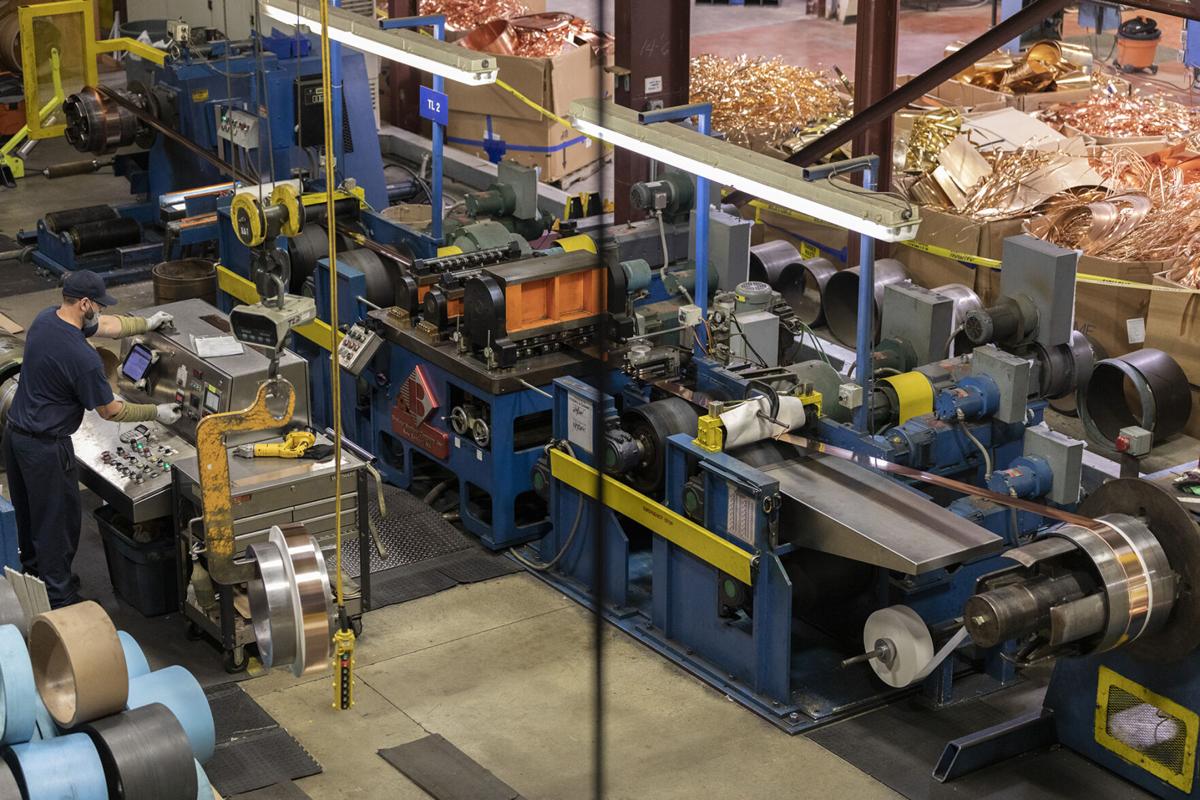 An employee of Eagle Metals operates the leveler in Leesport, Pennsylvania on April 15.

Charles Bernard, the president of Eagle Metals, looks on in Leesport, Pa. MUST CREDIT: photo for The Washington Post by Hannah Beier.

An employee of Eagle Metals operates the leveler in Leesport, Pennsylvania on April 15.

LEESPORT, Pa. — Charles Bernard is paying hundreds of thousands of dollars each year in tariffs on imported steel. But as the Biden administration weighs the fate of the three-year-old import taxes imposed by then-President Donald Trump, Bernard, the president of Eagle Metals, is in no hurry to see them removed.

Eliminating the tariffs would help his bottom line while exposing the U.S. steel industry to savage competition from cheap foreign metal. State-backed mills in China are flooding the global market with so much subsidized steel that American producers say they can not compete without government protection.

“It’s not great for us. The tariffs were a blunt instrument,” said Bernard, 64, one of their customers. “But we need a domestic steel industry.”

The Biden administration is embracing that bargain, accepting market distortions as the price of defending U.S. steel manufacturers against subsidized foreign rivals — even as some executives warn of risks to the president’s planned infrastructure overhaul.

Bernard’s stance illustrates how one of Trump’s most controversial trade initiatives, which angered U.S. allies and drew scorn from many economists, has become a plank in Biden’s “worker-centered” trade policy. The tale of the Section 232 tariffs, named for the part of a 1962 law that authorized them, also shows how temporary trade barriers can harden into semi-permanence.

Economic and political imperatives are cementing the metals tariffs. Chinese steelmakers are building new plants in countries such as Vietnam, Indonesia and Malaysia, meaning the global steel glut will intensify. And the Biden administration is determined to retain support from the United Steelworkers, a force in key states in the industrial Midwest.

“The 232 isn’t going anywhere,” said Samir Kapadia, a lobbyist with the Vogel Group.

Rather than scrapping the tariffs, as critics including the U.S. Chamber of Commerce have demanded, the administration could use them as a model for new trade barriers to fight climate change, analysts said. Section 232 gives the president sweeping powers to use tariffs to combat whatever he deems a national security threat.

“They like the power they have and the potential to use the law for their goals. In this case, climate is the big one,” said Scott Lincicome, a trade attorney and senior fellow at the Cato Institute.

The Biden administration is reviewing its trade policies, including the fees of 25% on steel and 10% on aluminum. Commerce Secretary Gina Raimondo earlier this month said that the tariffs “helped save American jobs in the steel and aluminum industries,” a possible signal that the taxes will continue.

The administration’s tariff deliberations come as the steel industry is consolidating around a handful of big players and enjoying record high prices. Reflecting the sunny outlook, a New York Stock Exchange steel industry index has gained 205% since the March 2020 market low compared with 80% for the Dow.

But supply disruptions in the pandemic’s aftermath, which some executives say are being aggravated by the tariffs, could complicate the industry’s response to the administration’s planned infrastructure program. As manufacturers rush to restock for an anticipated boom, Bernard is facing what he calls “unprecedented” challenges.

His steel suppliers are requiring him to place orders for next February, effectively forcing him to guess how much of each of 65 different alloys he will need in early 2022.

“These supply issues are only going to get worse if the infrastructure bill passes and the demand for domestic steel spikes even higher,” said Brian Murphy, Eagle Metals’ vice president. “Lead times and availability will be a serious issue for U.S. manufacturers.”

Eagle Metals’ orders for some types of stainless steel, which once were filled in five weeks, now take up to six months to arrive at the company’s headquarters. As the economy rebounds from its pandemic chill, manufacturers nationwide complain of difficulty obtaining materials, including shortages, rising prices and delivery delays, according to the Institute for Supply Management.

Dropping the tariffs would not fix all the steel supply problems, but it is something the president can do immediately, according to a coalition of steel users, including the Precision Metalforming Association.

Tom Conway, president of the United Steelworkers Union, said the tariffs were “a ham-fisted approach to the problem” of too much global steel that nonetheless can not be lifted until a lasting solution is found.

Under the auspices of the Group of 20 nations, major steel-producers — excluding China — have held talks for almost five years without making much progress. Both Conway and Kevin Dempsey, head of the American Iron and Steel Institute (AISI), an industry group, say they expect the Biden administration to push for a negotiated global settlement. But no one expects quick results.

“China’s not going to roll back capacity just because you ask them to,” said Conway.

Trump introduced the metals tariffs in March 2018, saying rising foreign imports threatened to drive U.S. producers out of business and leave the United States dependent upon foreign suppliers. Canada and Mexico were later exempted and several other countries agreed to quotas instead of tariffs.

The levies represented the brightest sign of Trump’s determination to reorient trade policy after decades of U.S. officials reflexively seeking lower tariffs. Steel and aluminum makers welcomed the protection, but Wall Street sold off sharply and prominent Republicans and some Democrats assailed the move.

At least one member of Congress, Rep. Bill Pascrell, D-N,J., has suggested using section 232 tariffs to discourage imports that bear a high carbon footprint. Todd Tucker of the Roosevelt Institute, a member of Biden’s Commerce Department transition team, said the “steel and aluminum industries would be at the top of anyone’s list” as potential targets of a climate tariff.

Steel industry organizations credit the existing tariffs with creating 3,200 new jobs and sparking $15.7 billion in spending on mill upgrades and the reopening of idled facilities. Imports last year accounted for 18% of U.S. steel consumption, down from close to 30% in 2018.

“The 232 tariffs and quotas have worked very well,” said Sweeney. “They’ve done what they were intended to do.”

Still, no jobs boom has resulted. Employment in the nation’s blast furnaces, mills and foundries rose before the pandemic to more than 144,000 from 139,200 when Trump imposed the measures before dipping to 135,000, according to the Bureau of Labor Statistics.

The initial gains came at the cost of disrupting the operations of steel users, which employ more than 6 million workers.

The price of hot rolled steel has more than tripled since its August low to $1,350-per-ton and is up 57 percent since the tariffs took effect. Domestic mills have been slow to restore capacity mothballed during the pandemic shutdowns to meet surging demand.

“The conditions in the steel market no longer support the need for these tariffs. In fact, their continuation jeopardizes the future of the U.S. steel industry due the situation this has placed their customers in,” said Scott Buehrer, president of B. Walter & Co. in Wabash, Ind., a maker of fabricated metal products.

About 30 miles southeast of Allentown, across the street from a weathered red barn, sits Eagle Metals.

The company takes coils of steel that weigh up to 20 tons and transforms them into customized sizes and thicknesses for its customers. Those manufacturers, in turn, use the processed steel to make automotive and aerospace parts, metal credit cards, buttons for Microsoft Xbox controllers, surgical instruments and parts for Bic pens.

For some of its customers, Eagle Metals imports from Finland a type of stainless steel made with nickel that it says it cannot obtain in the United States. Murphy checks every day to see if the Commerce Department has approved the company’s request for permission to import the specialty product without paying the tariff.

“We just want to have the same pricing as our competitors,” said Murphy. “[The tariff] makes us the high cost producer.”

Allegheny Technologies, which formerly produced the metal, announced in December that it was quitting the stainless steel business. The company said it had earned profits of less than 1 percent on $445 million in revenue in 2019 and would concentrate instead on higher-margin operations.

In July, the company idled its three-year old Midland, Pa., facility, a joint venture with a Chinese steelmaker, Tsingshan Stainless. Allegheny blamed the closure on the government’s failure to grant it an exclusion from the tariffs. In an interview last month with National Public Radio, Raimondo promised to do “a better job” managing the Commerce Department exclusion process.

For Eagle Metal, the tariffs now are a costly annoyance. Other problems — like finding enough good workers — are more pressing. The company has been operating on three shifts since Thanksgiving as it scrambles to keep up with robust demand.

Bernard, a veteran of nearly four decades in the business, is surprisingly glum for a businessman with almost more orders than he can handle. He worries about the administration’s plan to raise taxes, sees the current supply hiccups as a warning of an eventual “train wreck” and fears the president will treat the tariffs as a bargaining chip — and trade it away too cheaply.