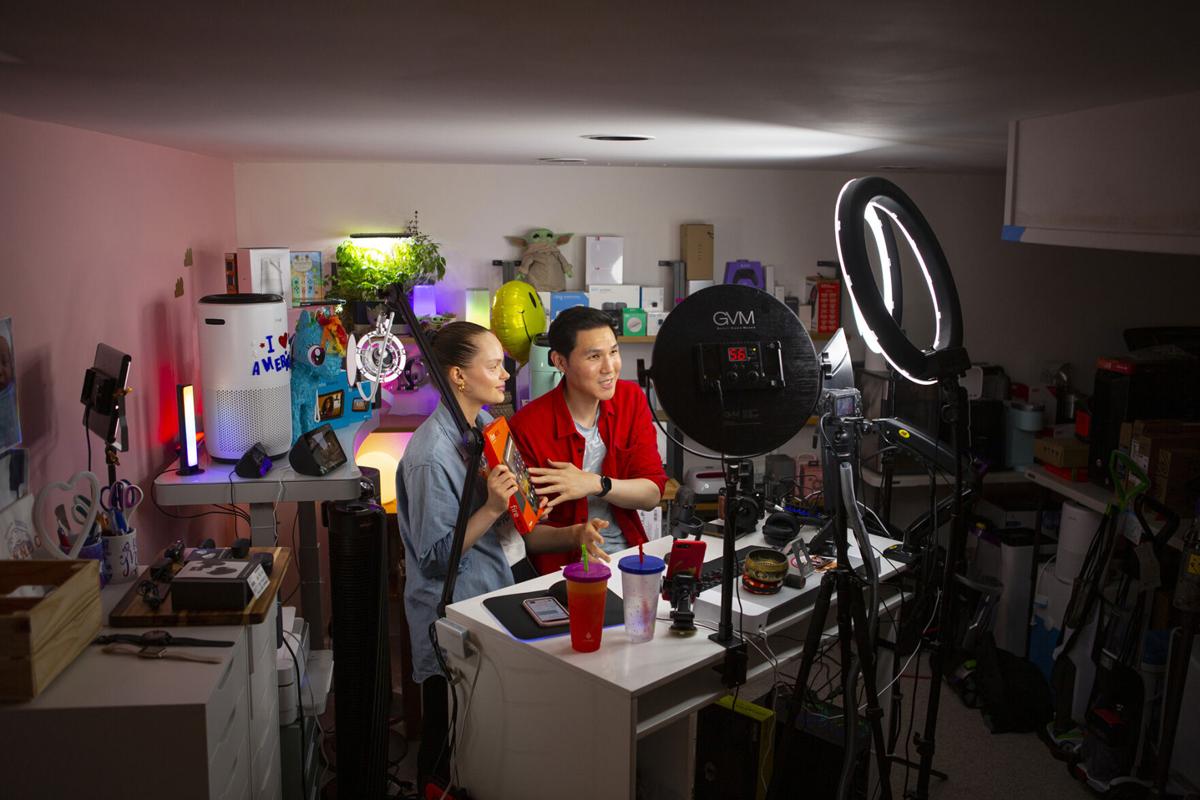 ABOVE AND BELOW: Hélène Desmettre and her husband David Kim host their daily Amazon live stream at her home studio in Morristown, N.J., on July 7. 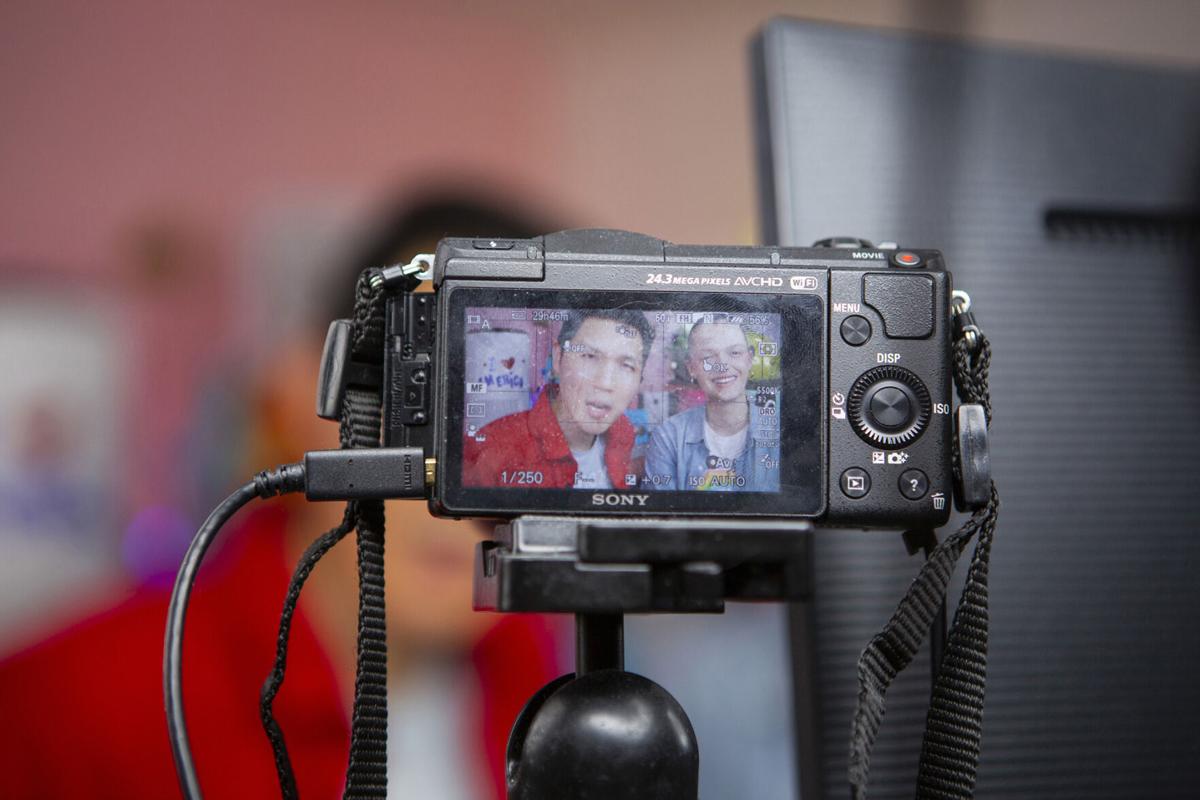 Hélène Desmettre and her husband David Kim host their daily Amazon live stream at her home studio. MUST CREDIT: Photo for The Washington Post by Calla Kessler

ABOVE AND BELOW: Hélène Desmettre and her husband David Kim host their daily Amazon live stream at her home studio in Morristown, N.J., on July 7.

Hélène Desmettre and her husband David Kim host their daily Amazon live stream at her home studio. MUST CREDIT: Photo for The Washington Post by Calla Kessler

The models strode the catwalk as models do, scampering down the runway in the season’s essentials — vintage T-shirts, yellow rain boots, a camo-print backpack — before a virtual audience.

That the models were furry and four-legged was the draw for the roughly 1 million viewers who tuned in for Petco’s 22-minute live stream on Facebook in spring. Sales were double what the company had forecast.

“It turned out that a pet fashion show was exactly what our consumers wanted from us,” said Jay Altschuler, vice president of media transformation for the pet chain. “We went in with very modest expectations and didn’t really believe it was going to be a huge driver — but it was.”

Live-streamed shopping events — part entertainment, part ad blitz — have become the latest frontier in online shopping. Retailers and brands as varied as Walmart, Amazon, Gucci and L’Oréal are experimenting with new streaming formats to sell a growing array of beauty products, clothing, electronics and home furnishings. The events take place on such platforms as Facebook, Instagram and TikTok, but they’re increasingly on retailers’ own websites.

Live-stream shopping events generated an estimated $5.6 billion in sales last year, a market that retail analytics firm Coresight Research projects will balloon to $11 billion this year and nearly $26 billion by 2023. The format, which has been popular in China for more than five years, gained traction in the United States during the pandemic as retailers pursued homebound consumers on their phones and computers.

“It’s a version of the Home Shopping Network, souped up for the modern age,” said Ken Fenyo, president of advisory and research at Coresight. “Live streams marry video, interactivity and content — along with a little bit of the thrill of shopping in person.”

But some analysts are skeptical that live streams will translate to long-term sales growth, given the endless streaming options Americans already have on social media and such platforms as Netflix and Hulu. Home-shopping channels, they say, were born of an era when audiences were largely captive to their television sets. It’s no longer as simple to attract — or hold — the attention of today’s viewers, who can access entertainment on their smartphones, watches and computers at any time.

“A lot has changed since the days of QVC,” said Paula Rosenblum, managing partner at RSR Research, a retail technology consultancy in Miami, referring to home-shopping channel QVC. “You can have every brand out there putting up a live stream, but who’s going to watch it? I just don’t think it has legs.”

The live streams are as varied as their audiences: There’s The Food Network’s Ree Drummond, who has sold her brand of “Pioneer Woman” cropped jeans, floral trash cans and nonstick griddles on a Walmart “shop-along.” Or the YouTube influencers promoting LG Electronics computers, TVs and refrigerators on Facebook Live and Instagram Live. Swarovski designers opened their studios, offering a peek into the creative process behind their intricate crystal figurines.

Abercrombie & Fitch kicked off its newest line, Social Tourist, with a live-streamed fashion show. The brand was designed in collaboration with influencers Dixie and Charli D’Amelio, sisters who have a combined TikTik following of more than 170 million on the short-form video-sharing platform, making it an obvious venue for the debut. Abercrombie and its offshoot, Hollister, worked closely with TikTok to create a 30-minute show, which aired last month.

“We pride ourselves on reaching our customer where they’re already spending a lot of their time, and for Gen Z, that is TikTok,” said Jacee Scoular, senior director of brand marketing for Hollister. “It was important to us that consumers could buy the product as they were seeing it on the runway.”

Nearly one-third of Americans have tuned in to shopping live streams, according to Coresight’s Fenyo, and close to half of them made a purchase.

Analysts say many live streams entice fewer than 1% of the viewers to buy. (The most successful of streams can capture sales from 10 to 20% of the audience.) There also are wide disparities in consumer engagement. Analysts said events that offer entertainment and allow shoppers to buy products from the same screen as the live stream generally fare best, but retailers are racing to figure out other winning formulas.

“This really is the year of experimentation,” Fenyo said. “We see a lot of brands — certainly small ones, but also a growing number of large brands — really starting to invest in live streams. They’re asking: ‘What kind of items should I feature? Who should I get to host it? A celebrity influencer? Or maybe one of my employees?’ It’s beginning to catch on.”

Hélène Desmettre and her husband host Amazon live streams multiple times a day, sometimes for eight hours at a time. The 27-year-old model and social media influencer began sharing her beauty routine with viewers just as the coronavirus pandemic was taking hold in the United States. As the country retreated from socializing and in-person shopping, she said, she began to rely on her daily interactions with regulars to keep her from feeling isolated and alone.

“I used to be really polished when we started,” said Desmettre, who streams from her basement in northern New Jersey. “I didn’t dare to be funny or go outside of my bubble. But now it feels like I’m talking with friends.”

The e-commerce giant, which began dabbling in live-stream shopping five years ago, has doubled down on Amazon Live in recent months. A new app lets brands and influencers create their own “shoppable” live streams, allowing viewers to tune in, ask questions and purchase advertised items. The company declined to say how much revenue a typical live stream brings in, but noted that high-profile events, like the singer Dua Lipa’s recent livestream album launch, can easily attract more than 1 million viewers.

As a result, a cottage industry of influencers and celebrities has taken hold, streaming straight from their bedrooms and dining room tables in hopes of tapping into a small commission on each item they help sell.

Desmettre’s husband, David Kim, joined her after he lost his brand consulting job early in the pandemic. Thousands of people tune in each day to watch the couple share their opinions on any number of products, including air purifiers and computers. They earn commissions of about 1 to 4%, though they declined to share specifics, citing a nondisclosure agreement with Amazon.

The ultimate goal, they said, is to draw in shoppers and give them enough context to buy a product. The tactic generally works: Live-stream shoppers are 50% less likely to return an item than other online shoppers, according to Coresight data.

Ashley Young recently spent $75 on two quartz stones she saw on a Facebook live stream hosted by Dusty Gem. The 36-year-old, who lives in Centennial, Colo., does most of her shopping online on Amazon, Walmart and Etsy, but she said she was looking for a more intimate experience during the pandemic.

“The live stream was more personal than regular online shopping,” she said. “You can ask questions about the product. It let me know exactly what I would be getting.”