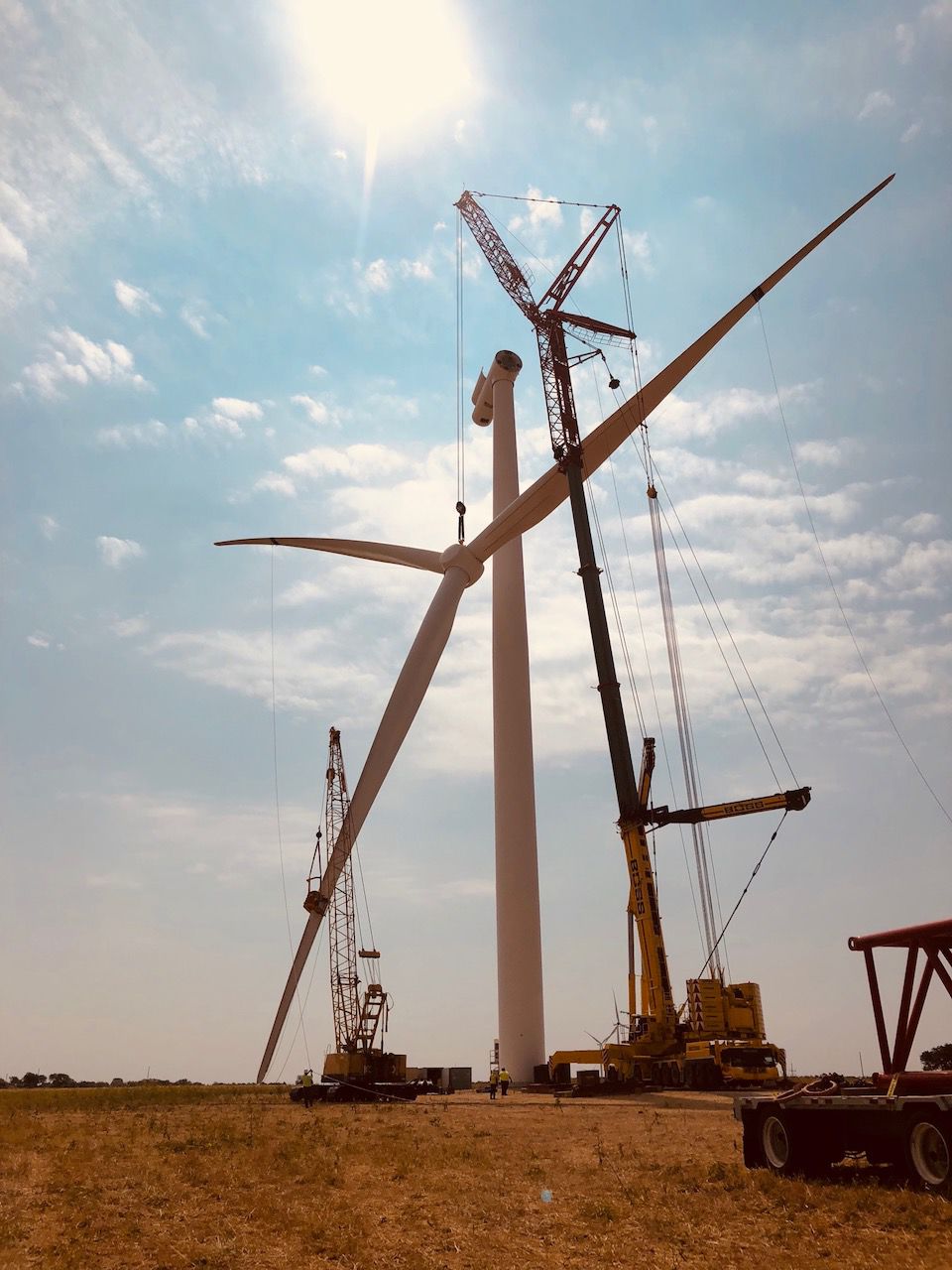 Boss Crane & Rigging of Longview is expanding into the wind energy business, and will use its crane and other equipment to service wind farms in Texas and elsewhere. (Photo courtesy of Boss Crane) 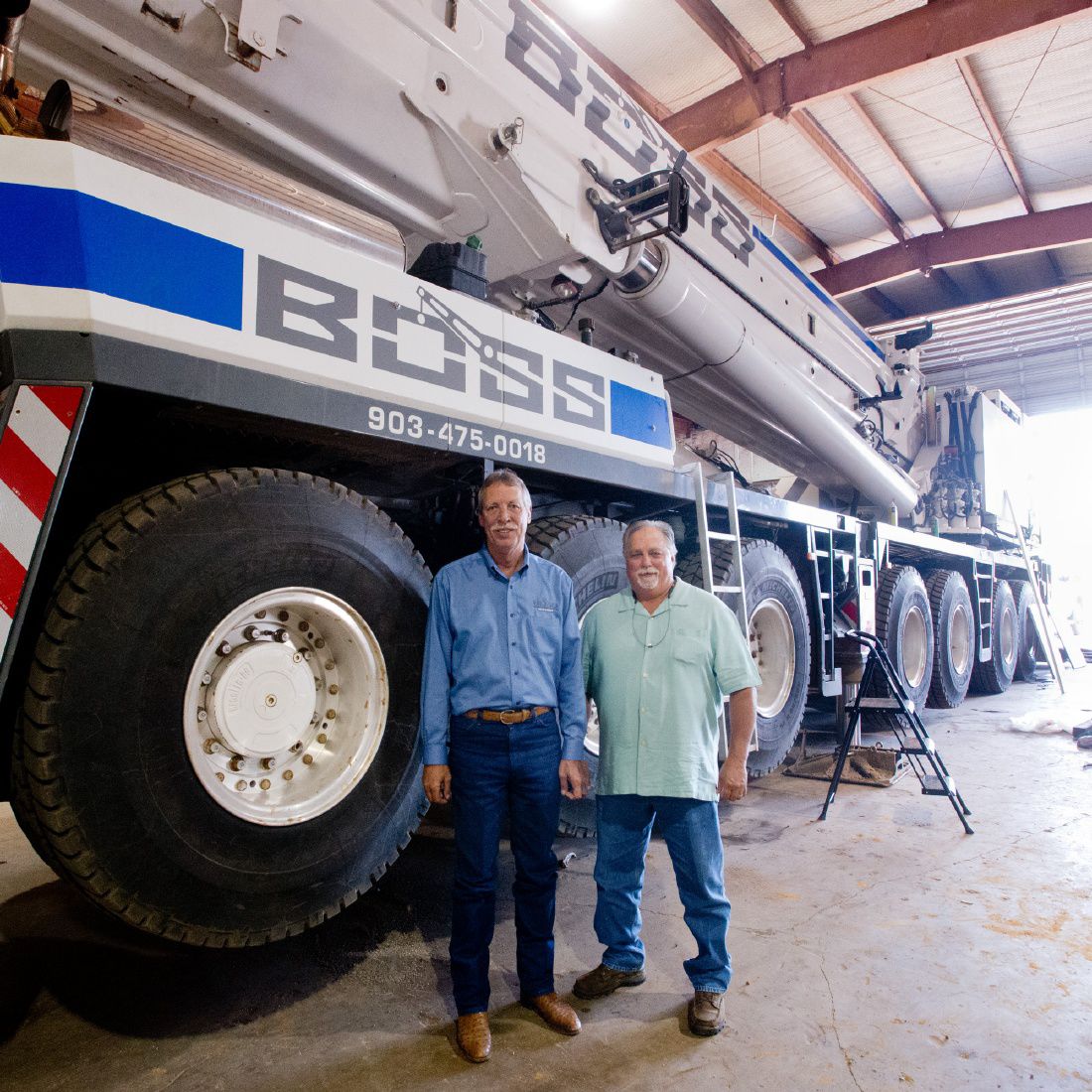 Boss Crane and Rigging President David Cowley and CEO David Lowry speak in late 2017 about the company and its move to a new facility at 5533 S. FM 2087. The name of the company is an acronym for Bennett On-Site Services LLC.

Boss Crane & Rigging of Longview is expanding into the wind energy business, and will use its crane and other equipment to service wind farms in Texas and elsewhere. (Photo courtesy of Boss Crane)

Boss Crane and Rigging President David Cowley and CEO David Lowry speak in late 2017 about the company and its move to a new facility at 5533 S. FM 2087. The name of the company is an acronym for Bennett On-Site Services LLC.

Longview-based Boss Crane & Rigging is expanding into the wind energy business with plans to hire 230 people for a project to replace aging turbine equipment at wind farms in Texas.

The goal, said President David Cowley, is to further diversify the growing company, which provides rigging services to a variety of industries, including oil and gas, paper mills and mining. Boss Crane has 173 employees and has created a separate company, Boss Transportation Services, that has a fleet of 60 trucks and 75 drivers to deliver freight nationally.

“This will be our first step into this part of the business,” said Niels Winther, Boss’ director of wind energy. “We see this wind industry will increase over many years.”

It continues a push for growth at Boss, which is part of Bennett International Group of McDonough, Georgia.

Founded in 2015, the company two years ago outgrew the 10-acre leased site where it began in unincorporated Longview. It acquired the former Trican pressure pumping company property at 4836 W. Loop 281, a 16-acre site that gave it room to grow.

And it has been doing just that.

In January, Cowley hired Winther, who has more than 19 years of experience in the wind power industry, to lead the latest charge. In April, the company took an additional step by establishing a wind division.

Wind is a growing segment in generation, and Texas already is the nation’s leading state by amount generated, according to a report this month from the federal Energy Information Administration.

Winther and Cowley said they have so far secured four contracts with wind energy companies, but they declined to identify them.

Now it’s ready to begin staffing. Boss Crane is planning to conduct jobs fairs within a month in Longview and other locations to recruit employees who will replace nachelles (a cover housing generating components in wind turbines) and blades at wind farms.

Cowley said the company will be hiring laborers, riggers, crane operators and wind technicians, with crane operators earning as much as $45 an hour. Crane operators must have national certification. He added he expects to be fully staffed by October and have them begin work during the fourth quarter of this year.

The new workers also will replace power cables and control panels, Winther said. He added the new nacelles, which have built-in generators, will add about 30 feet to the height of wind towers — currently a maximum about 300 feet — and increase the efficiency and productivity at wind farms.

Cowley said, “The higher you go, the more wind there is.”

Winther said the work will be labor intensive.

“We will bring the cranes in” to the wind farms, he said, adding the cranes need to be taken in sections so they will fit on trucks.

Each site will have a project manager who will oversee a team of eight or nine people, and each project will take eight or nine days.

Winther, who holds a degree in electrical engineering from his native Denmark, said he has worked on wind energy projects in 19 countries and came out of retirement to work for Cowley.

“David Cowley and I have been friends for 15 years,” Winther said. “You never turn down a friend” — without a good reason.

The creation of the wind division that Winther now heads marks the second major expansion that has occurred since Boss Crane moved to its new location in October 2017.

Boss started the trucking company subsidiary a year ago because its parent company, Bennett, wanted to diversify in the trucking industry.

Cowley pointed with pride to the June issue of American Cranes and Transport, which ranks Boss Crane 52nd in the top crane companies in the U.S.