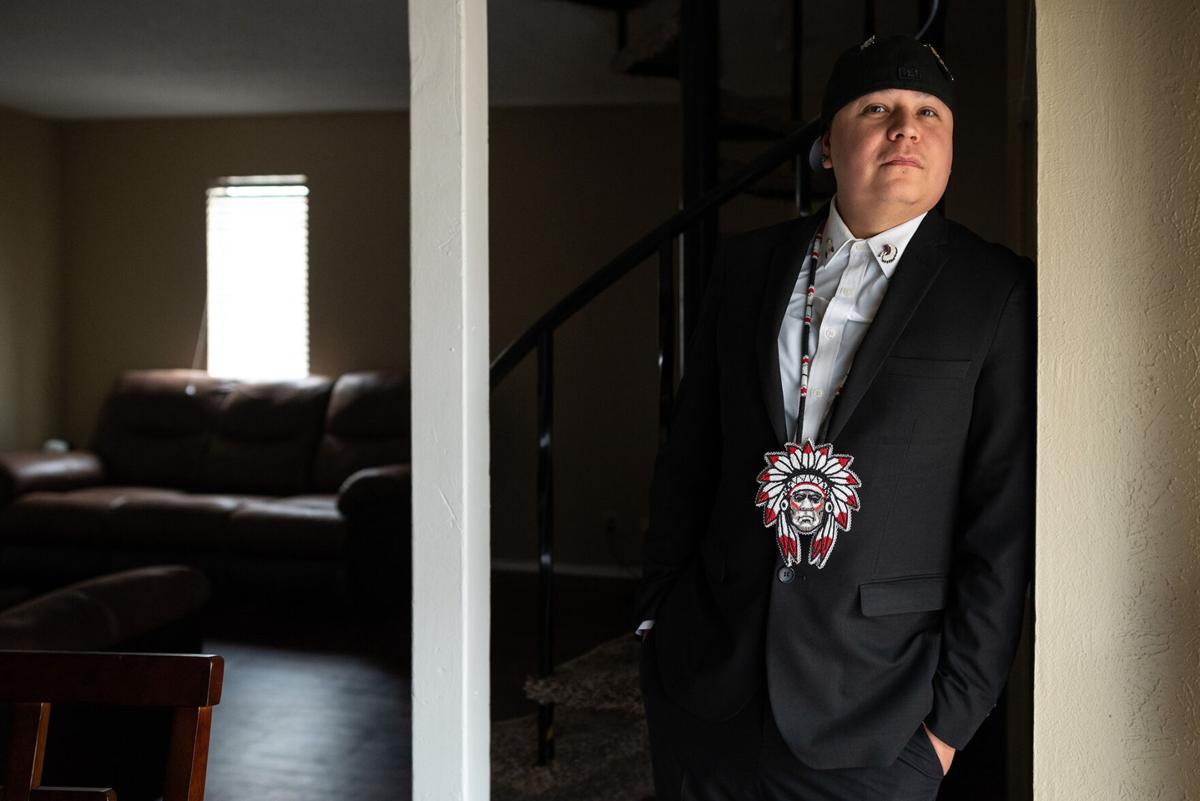 Quannah Ludlow, 37, stands in the dining area of his one-bedroom apartment in Longview. Ludlow was living for six months at a hotel while trying to find an apartment to rent. 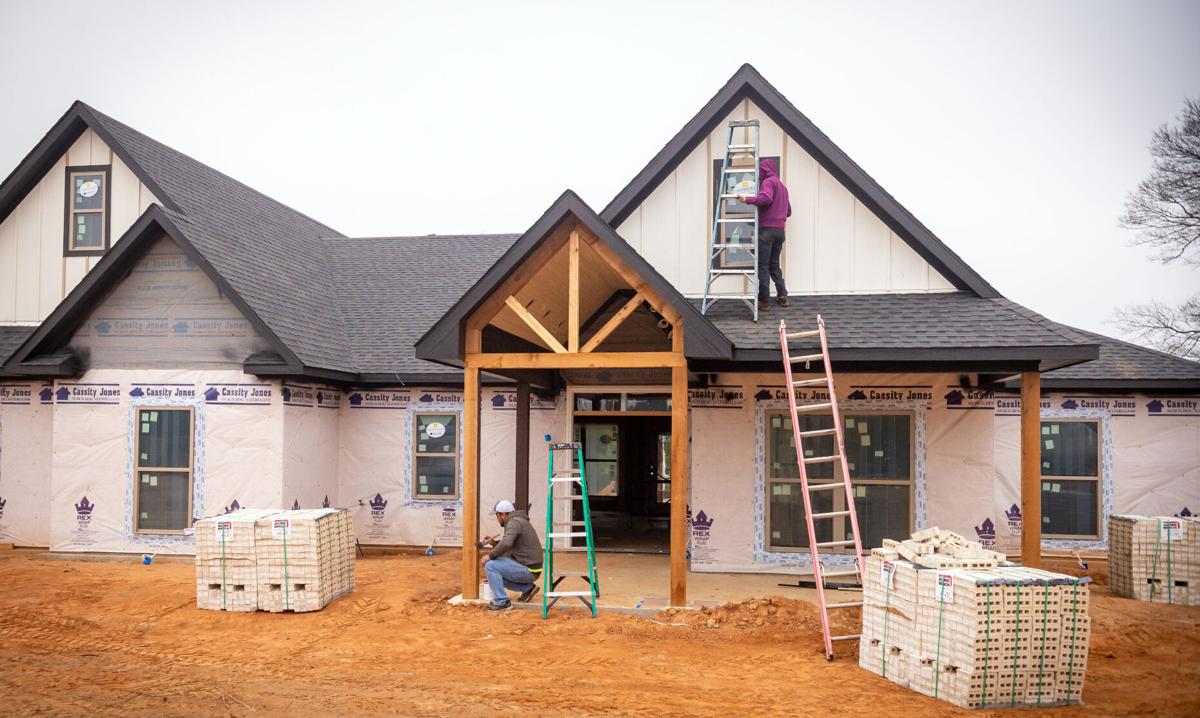 Work continues in February on a home under construction by Daryl Gregg, of C&D Home Builders, on Martin Luther King Jr. Boulevard in Longview.

Quannah Ludlow, 37, stands in the dining area of his one-bedroom apartment in Longview. Ludlow was living for six months at a hotel while trying to find an apartment to rent.

Work continues in February on a home under construction by Daryl Gregg, of C&D Home Builders, on Martin Luther King Jr. Boulevard in Longview.

When Quannah Ludlow took one of the top jobs at a manufacturing plant in Longview he didn’t expect such a hard time finding a place to live.

Buying a house was off the table — Ludlow wasn’t yet familiar enough with his new hometown to take that step, so the 37-year-old Oklahoman looked for an apartment while he settled into his new role managing the plant, which makes air conditioning equipment.

But as Ludlow submitted application after application, he found every apartment complex in this city had a lengthy waitlist. He ended up spending six months in a hotel.

Ludlow’s hunt for an apartment illustrates a growing reality: Virtually no part of Texas has escaped the housing crunch gripping the state and the rest of the nation in which people looking for a place to live are finding fewer options and increasingly higher prices. Across Texas, the median price of a home has jumped 33% since January 2020, just before the COVID-19 pandemic hit the state.

As offices shuttered in the early days of the pandemic, employees who found themselves working remotely discovered they could live anywhere — prompting migration from inside and outside of Texas to spots where homebuyers felt they could get more bang for their buck, especially if they wanted a home office.

At the same time, millennials who had long put off buying a home entered the market at a time when record-low interest rates made it cheaper for them to get a mortgage. As a result, major Texas cities like Dallas, Fort Worth and San Antonio saw the number of houses on the market dwindle and home prices soar in the last two years.

Nowhere was that more apparent than in Austin, where housing prices had been soaring for years before the pandemic and where the price of a typical home now stands at nearly half a million dollars.

“We’re not California yet,” said Luis Torres, a research economist for the Texas Real Estate Research Center at Texas A&M University. “But, slowly but surely, in a couple of years, we could get there.”

Now, the housing crunch has spread outside of the state’s major metropolitan areas and into more rural parts of Texas. Smaller cities and towns like Brownsville, Sherman and Longview — where homes are cheaper than in the larger cities — saw steep increases in home prices as COVID-19 spread, according to data from the Texas Real Estate Research Center.

Before the pandemic, the typical house in Longview cost $138,500. Now the city’s median home price is $215,000 — about 55% more expensive than in January 2020, but still more affordable than many other parts of the state.

Residential real estate experts consider six months’ worth of supply — meaning that it would take homebuyers six months to snatch up every home on the market — a healthy balance between buyers and sellers.

Longview hasn’t had that kind of supply of homes since 2018. As of October, the city had about two months’ worth of supply.

Part of that rise in demand likely stems from prospective homebuyers getting sick of competing in bidding wars in cities like Austin and losing, said Jessica Holmes, an East Texas real estate agent and incoming chair of the Longview Area Association of Realtors. Still, it’s not uncommon for buyers to spend $10,000 to $30,000 over asking price on a home in Longview, she said.

“They’ve kind of just, not settled, but almost resorted to going to the more rural areas where they have a better chance of getting in a house,” Holmes said.

Some, like Ludlow, are moving for work. Longview has added hundreds of jobs in recent years as retailers like Dollar General have built distribution centers, while Komatsu Mining Corp., which manufactures industrial mining gear, and AAON Inc., the air conditioning manufacturer that employs Ludlow, have expanded their existing operations.

But not everyone coming to Longview has a job in Longview. The cultural shift to working from home has drawn many homebuyers, local observers said. Scott Hamilton, a custom homebuilder in East Texas, said more clients are asking him to include home offices in new homes than they have in the past.

“There’s an awful lot of people who are looking at it going, ‘I’m going to be working from home forever,’” Hamilton said. “So offices have become more important.”

‘This is what housing costs now’

Kirk and Tammy Leetzow, who own a travel consulting firm, had already been working from home for years before landing in Longview. That made it easier for the couple, who are in their 50s, to move from Cabo San Lucas, Mexico, to East Texas last year to be closer to Tammy’s mom after her stepdad died.

“We don’t have to answer anybody,” said Kirk Leetzow, who also works as a tax adviser. “We can work remotely and we also work for ourselves.”

Plus, Longview’s relatively cheap. For less than $275,000, the Leetzows bought a four-bedroom, three-bathroom home in the Wildwood subdivision.

Finding a deal like that in Kirk Leetzow’s native Utah — where the cost of a typical home exceeds $500,000 — would be nearly impossible, he said.

“To move back to Utah just would not be economical,” Leetzow said. “It would be way too expensive.”

For Jay and Maryn Hemphill, the shift to remote working made it easier for Jay, a dentist, to start looking around for a place to set up his own practice. The couple had lived in Dallas for several years but didn’t want to stay there forever.

The couple settled on his native Longview, where an acquaintance connected Jay with another dentist who brought him on to his practice. Jay said he expects to take over the practice when the other dentist retires.

House-hunting from Dallas, it took the couple about six months and four bids to finally land a home — a three-bedroom, two-bathroom house that needed a paint job. They dropped $213,000 on the home — which they see as a worthwhile investment given that Maryn Hemphill now works from home for a Boston cloud computing company and the couple plans to retire in Longview.

“We felt like, ‘OK, this is what housing costs now, this is the town we want to live in,’” Jay Hemphill said. “It sure is a lot cheaper than Dallas and Austin. So that’s just more of a fact of life.”

Lots of demand, not enough homes

As more people flock to the rolling hills of Longview, the signs of growth abound. Bumper-to-bumper traffic is growing increasingly common. So is the sight of hardhats as construction workers build new homes or freshen up older ones in long-established neighborhoods.

With the supply of available homes dwindling, homebuilders are busy, but meeting the city’s housing demand is a tall order.

Supply chain problems and the rising cost of building materials have made it difficult for builders all over Texas to speed up the construction of housing — which would help satisfy demand and slow rising housing costs.

Longview has some unique obstacles to building.

Applications for residential building permits are up during the pandemic compared with previous years, but it’s hard to find enough land within city limits to build the kinds of large housing and apartment developments that the city needs to satisfy demand for housing, said Michael Shirley, who heads the city’s development services department. That’s largely driven homebuilders to construct new homes one at a time on smaller, existing lots.

There’s open land outside of the city, Shirley said, but state limits on cities’ ability to annex property make it impossible for the city to build the kind of infrastructure — roads, water and power lines — that would encourage more development.

“With cities not having an ability to really annex land, we all kind of have to deal with what land we have,” Shirley said.

After months of waiting and living in the hotel, Ludlow finally found an apartment in December — a one-bedroom next to a pond going for $1,000 a month. But he had to act fast.

“They were like, ‘Hey, someone’s already looking at it, if you come now, you put in a deposit, it’s yours,’” Ludlow said. “So I just did that because I’m like, ‘I’m tired of being in a hotel, I need to get into a place where I’m comfortable and can put my feet up.’”

Ludlow’s not getting attached to the place. He doesn’t plan to decorate the bare walls or furnish the place beyond two couches, a dining room table and a TV. By summer, his younger brother will move with his family from Tulsa and join him in Longview.

The past two years have been hard on Ludlow’s family. Last year, Ludlow’s 29-year-old sister died unexpectedly, leaving behind three young children who are now being raised by Ludlow’s brother and his wife.

The plan is to find a plot of land big enough to build two houses so Ludlow can live close to the rest of the family, especially his nephews and niece.

“I think moving here will give them a chance to start living again,” Ludlow said.