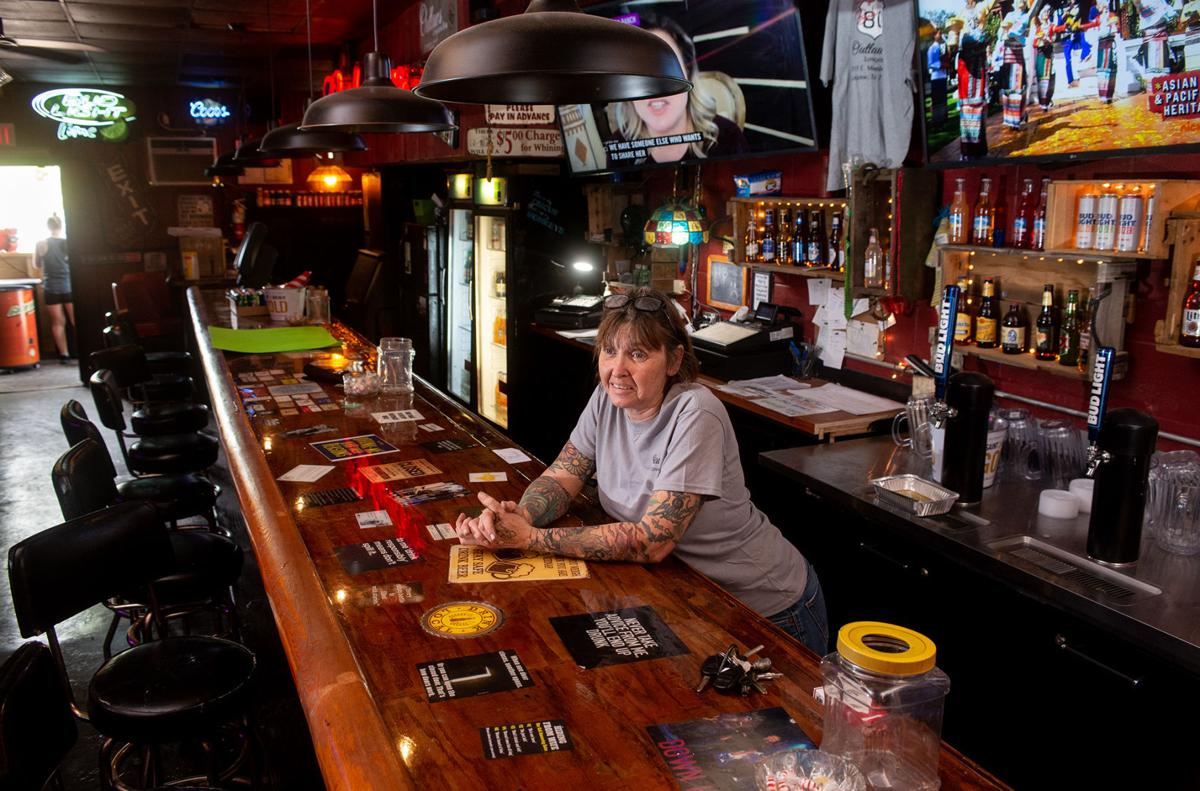 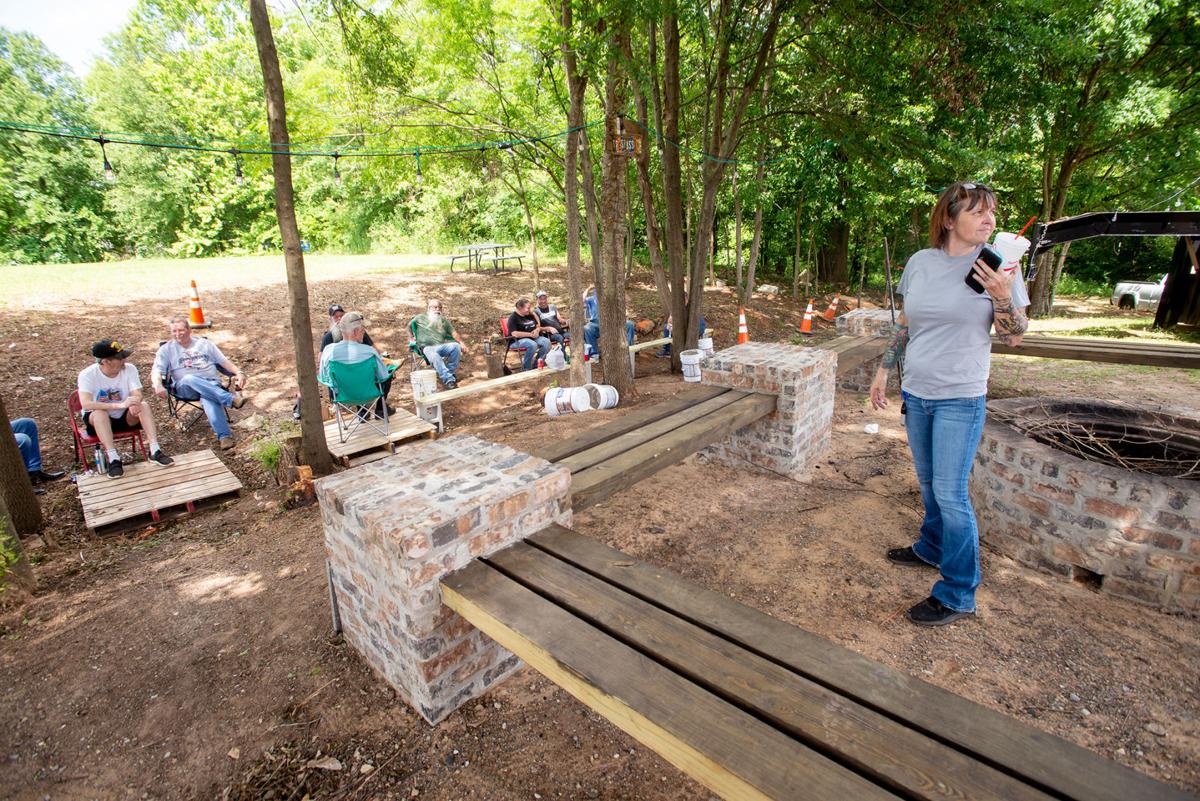 Outlaws Longview Bar owner Melissa Lynn Kelly speaks to a group of loyal customers who have chosen to sit across the business’s property line on Thursday, May 14, 2020. Kelly plans to reopen today. (Michael Cavazos/News-Journal Photo) 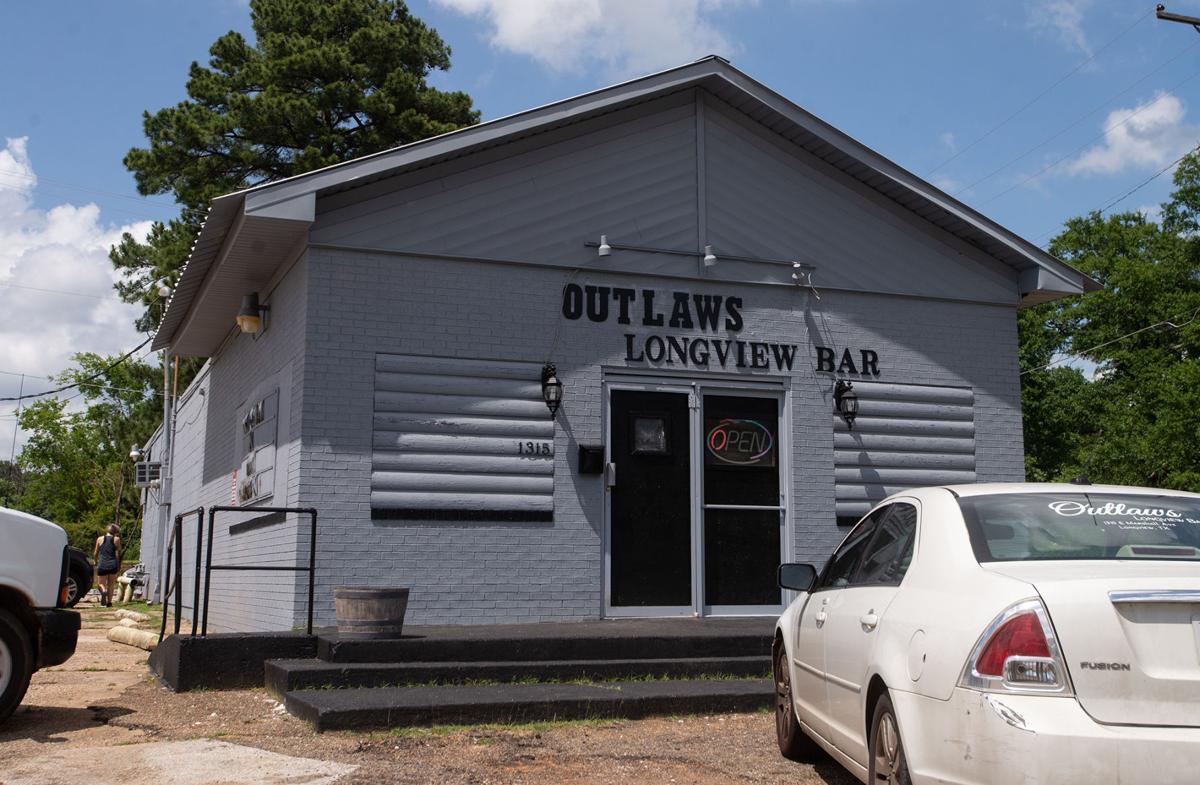 Outlaws Longview Bar is seen on Thursday May 14, 2020. Owner Melissa Lynn Kelly said she plans to reopen today, despite Gov. Greg Abbott’s order for bars to remain closed because of the COVID-19 pandemic. (Michael Cavazos/News-Journal Photo) 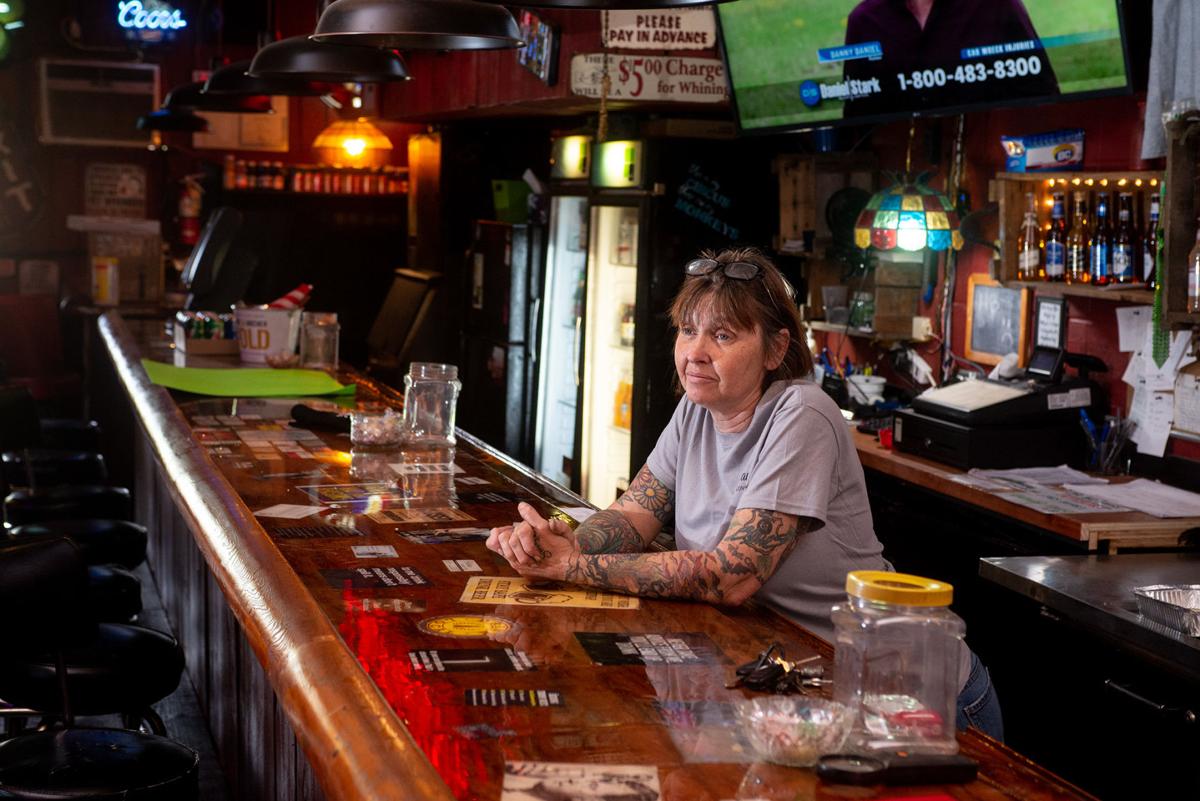 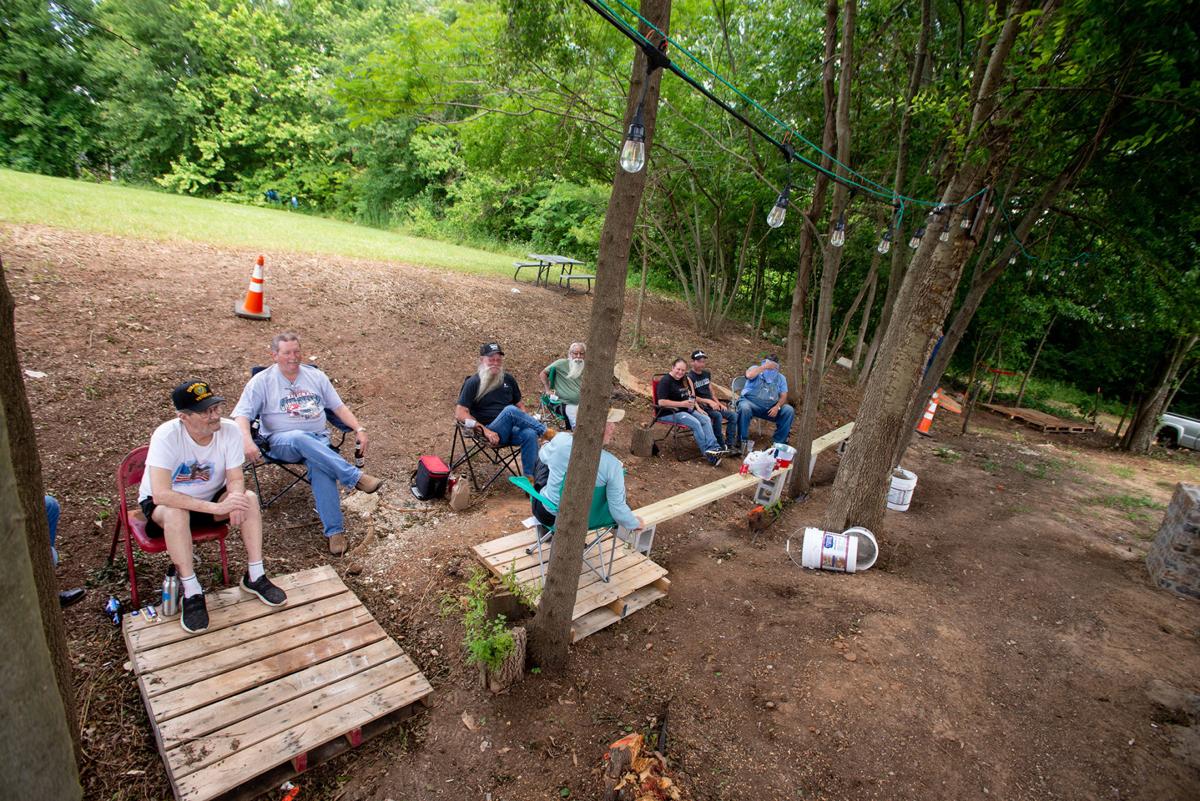 Outlaws Longview Bar owner Melissa Lynn Kelly speaks to a group of loyal customers who have chosen to sit across the business’s property line on Thursday, May 14, 2020. Kelly plans to reopen today. (Michael Cavazos/News-Journal Photo)

Outlaws Longview Bar is seen on Thursday May 14, 2020. Owner Melissa Lynn Kelly said she plans to reopen today, despite Gov. Greg Abbott’s order for bars to remain closed because of the COVID-19 pandemic. (Michael Cavazos/News-Journal Photo)

However, Kelly, who bought the bar at 1315 E. Marshall Ave. in December after working there off and on as a bartender since 2001, said her intent is not to be a lawbreaker, and she will observe social distancing guidelines by limiting occupancy to 25%.

“We are not trying to defy the government,” Kelly said. “We are simply trying to feed our families and keep our businesses going.”

Kelly and other bar owners and businesses shut their doors beginning midnight March 20 to comply with Abbott’s executive order intended to prevent the spread of the novel coronavirus. Abbott since then has allowed businesses such as restaurants, shops, hair salons and barbershops to reopen, with several restrictions, including a 25% capacity limit and social distancing requirements.

The bar industry has been shut down for more than 50 days, banned from takeout sales that have allowed some restaurants to limp by, even as restaurants were given some permissions to sell to-go booze. Texas bars have shed about 75,000 jobs and $630 million in revenue because of mandatory shutdowns.

Abbott is expected to announce more openings for the state on Monday.

Last month, Abbott said he hoped to reopen bars “on or no later than mid-May.” However, in a May 5 press conference, he hedged on the timeline for bars, saying he first needs feedback from bar owners and doctors, given how much bars vary, especially when it comes to size.

But on Tuesday, Abbott indicated that if bars could replicate restaurants’ reopening model — limited capacity, a restricted number of people per group and spacing out customers — “there could be a pathway toward opening them up,” he said in an interview with KPRC-TV.

Kelly said she continued in business during the indoors shutdown by offering a drive-thru and curbside service (a bar in the back porch) for about a month.

“It was going really well,” Kelly said. “We were doing social distancing (outside).”

However, she said the Texas Alcohol Beverage Commission notified her about three weeks ago that she would not be allowed to operate the back porch bar.

She said she reached out to the TABC and Longview Police Department for advice before deciding to reopen and hired the attorney who represented Dallas salon owner Shelley Luther, who was jailed and later released after reopening her salon before Abbott lifted the shutdown for salons May 8.

Kelly said she and her five bartenders will be back at work today. And when the bar reopens, she said she will practice social distancing inside a venue with prepandemic seating capacity of 75 people and take other measures.

“I plan to have the restrooms cleaned every 30 minutes,” Kelly said. “The bar will be wiped down continuously with disinfectant.”

Kelly said she has a loyal customer base and expects a “big support team” to show up.

Kelly has drawn moral support from Herb Wilburn, owner of Herb & Dee’s Break Room on West Marshall Avenue. However, he said he would have preferred bar owners had organized opposition instead of one person, such as Kelly, going alone.

“You can’t do it as one person,” said Wilburn, who said business began to slow down in mid-February during the early days of the pandemic.

“Right now, there is only three people in town that might be thinking what she is doing,” Wilburn said. “I’ve talked to some others.”

Wilburn said the state allowed exceptions to business to sell food and beverages to go, such as restaurants. “I can’t sell liquor to go.”

Restaurants and restaurant/bars have been allowed to reopen using 25% capacity of their dining areas since May 1.

Some Longview restaurants that have reopened since then have done well despite the dining limitations and continue to offer takeout and curbside services.

“I’ve been doing fine,” said Todd Cowart, managing partner at Texas Roadhouse on East Loop 281. “I think we have the support of Longview. We’ve had our ups and downs getting a flow back (of customers) in the restaurant. Other than that, it has worked out well. We are hoping to turn into 50% next week.”

At 25% capacity, Texas Roadhouse can seat about 84 customers at one time.

On The Border, near the Longview Mall, may seat as many as about 100 patrons.

Business has been “pretty good” at On The Border, kitchen manager Edgar Aguilar said. “Twenty-five percent is pretty easy to fill.”

However, “We are used to (serving) a lot more people,” he said.

Other restaurant/bars contacted by the News-Journal referred calls to their corporate offices or declined to comment.

Longview isn’t the only city where bar owners are getting impatient. In Fort Worth, Emil Bragdon said he and other bar owners across Texas are seriously contemplating opening up illegally to get the governor’s attention.

Bragdon said he’s running out of money after his bars have been shut down for almost two months. And lately, he’s been asking himself: “What would Luther do?”

Abbott ultimately allowed salons to reopen May 8 — more than a week ahead of his initial schedule — after Luther’s ruckus and pressure from within his own party.

“This one lady did it, and she got a lot of attention, and now all the salons are open,” Bragdon said. “Is that something we have to do? Because if we have to do that, we’ll do it.”

Earlier this week, the Texas Bar and Nightclub Alliance and Texas Restaurant Association each sent the governor’s reopening task force recommended guidelines — with rules that mirror the guidelines set for restaurants.

The Texas Bar and Nightclub Alliance also is encouraging bars to do a soft reopening today, said Bob Woody, a board member for the organization and an owner of multiple Austin bars.

While the soft launch would be closed to customers, it would show government officials and customers walking by that bars are ready to reopen. It also will be an example of how the reopening guidelines sent to the governor’s task force work in practice.

Bar owners said they can adapt, just like restaurants were allowed to do.

— The Texas Tribune contributed to this report.