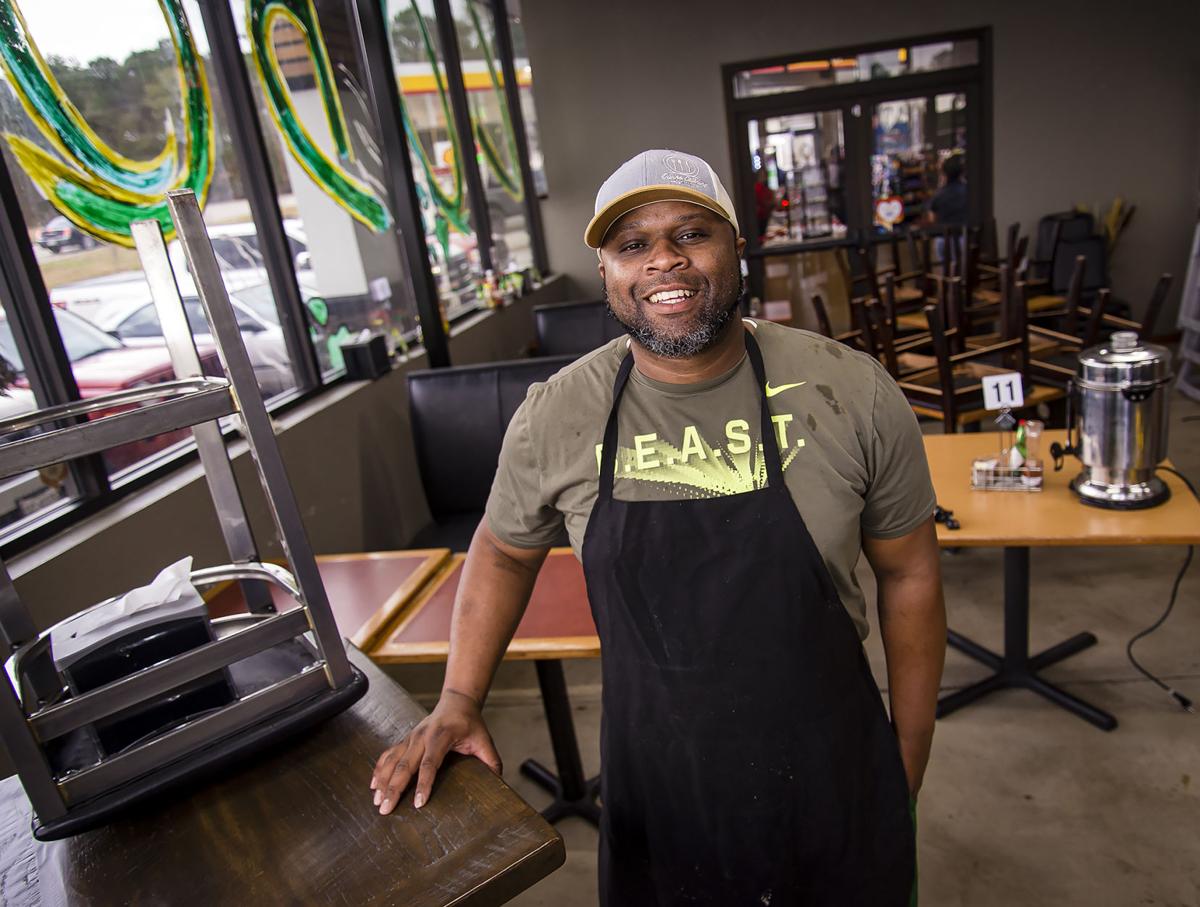 Kevin Hawkins takes a break from cleaning out his Hawkins Parkway restaurant Saturday, November 30, 2019. Hawkins says he is closing the restaurant to focus on his catering business, which includes multiple military catering jobs around the nation. (Les Hassell/News-Journal Photo) 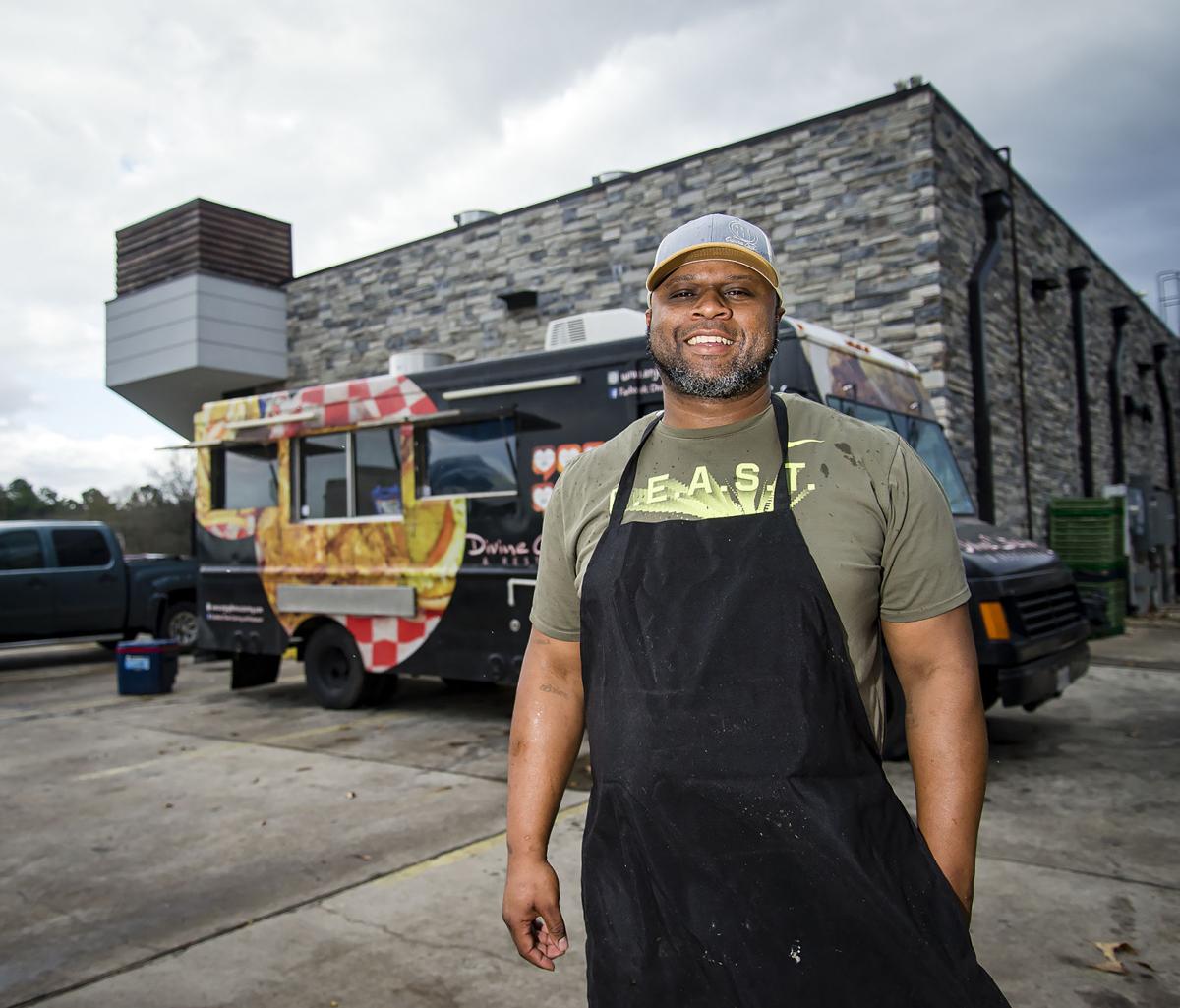 Kevin Hawkins takes a break from cleaning out his Hawkins Parkway restaurant in November. Hawkins says he is closing the restaurant to focus on his catering business, which includes multiple military catering jobs around the nation. 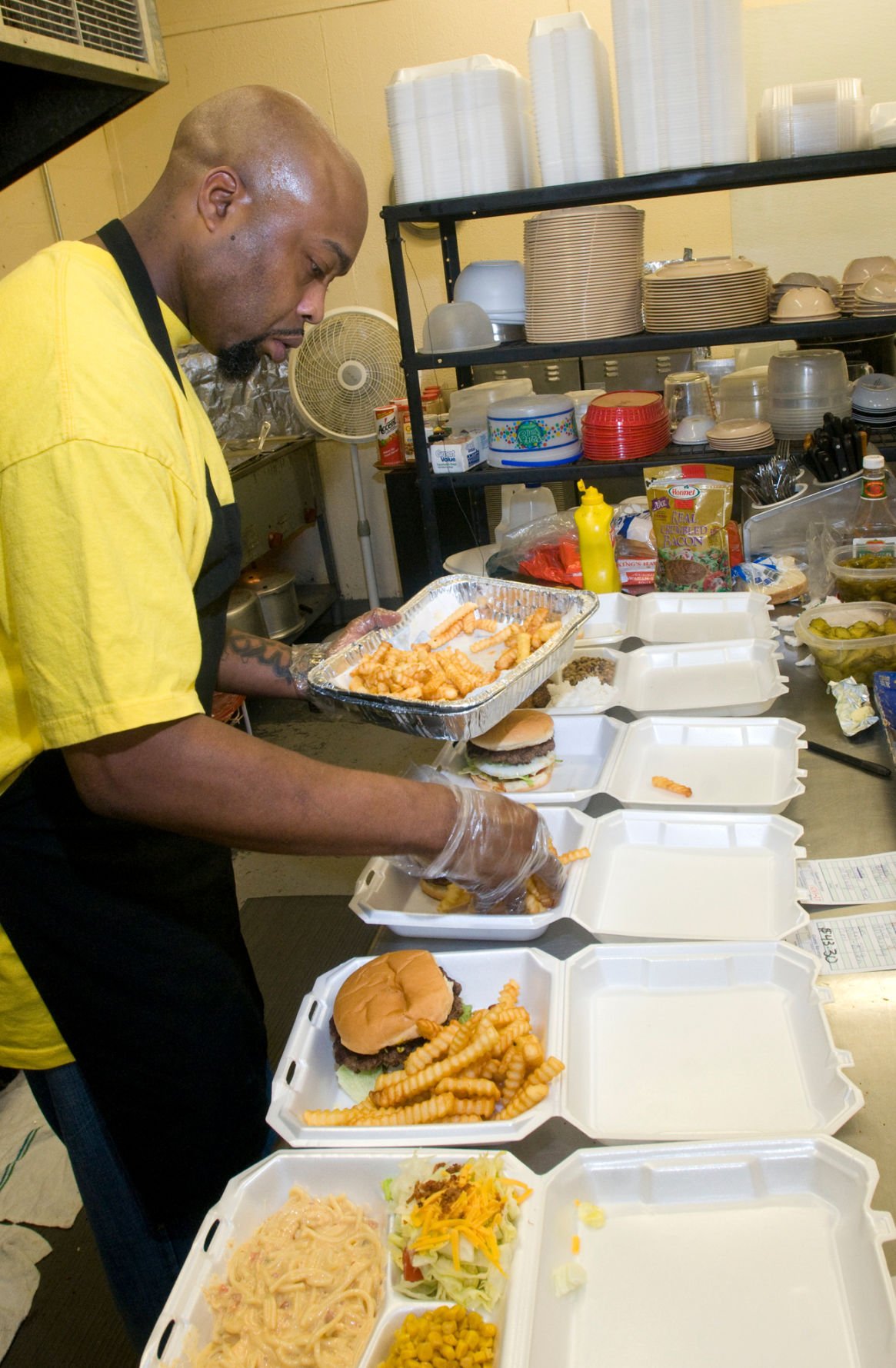 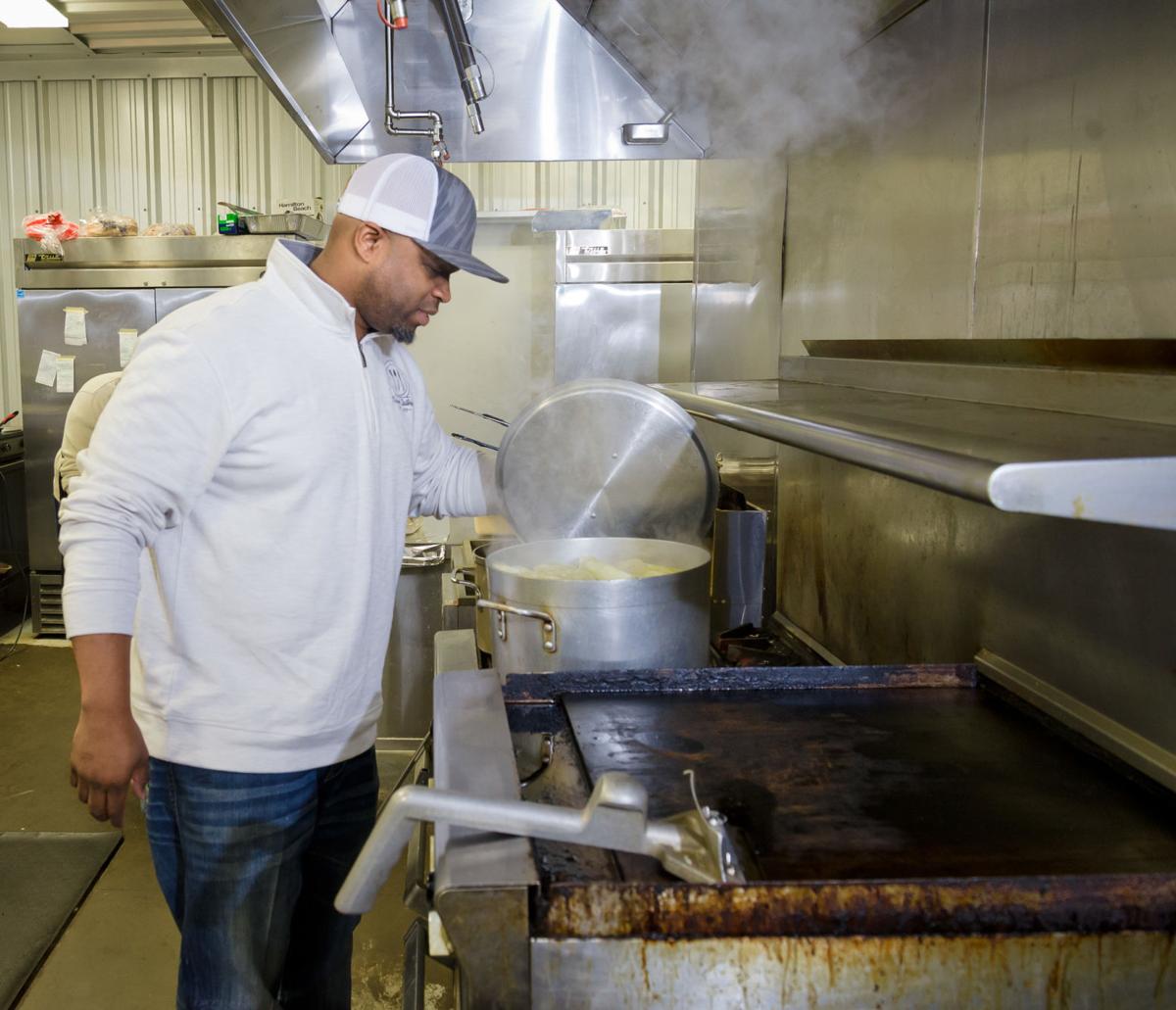 Kevin Hawkins helps out in the kitchen at Divine Catering’s Diana location in 2017. 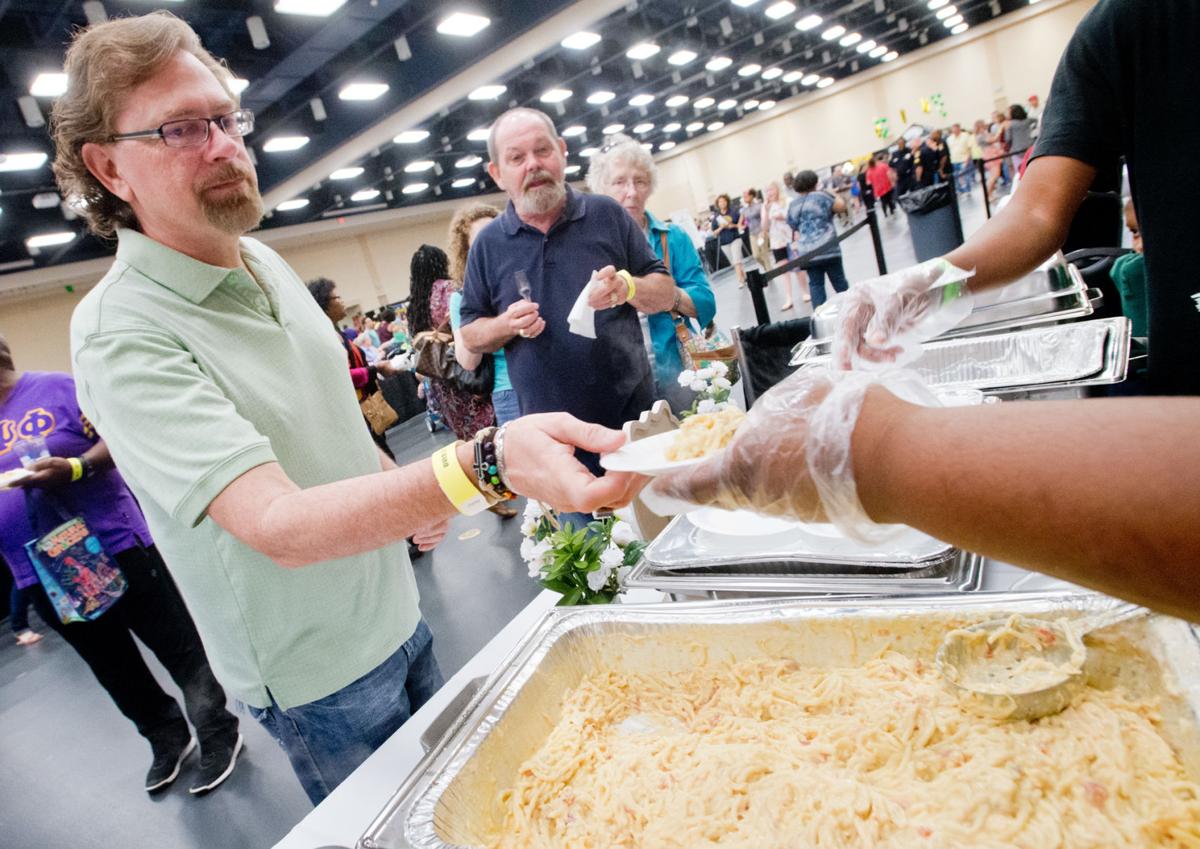 Billy King and Robbie Black visit the Divine Catering booth during the Taste of Longview in this 2017 file photo. (Michael Cavazos/News-Journal File Photo)

Kevin Hawkins takes a break from cleaning out his Hawkins Parkway restaurant Saturday, November 30, 2019. Hawkins says he is closing the restaurant to focus on his catering business, which includes multiple military catering jobs around the nation. (Les Hassell/News-Journal Photo)

Kevin Hawkins takes a break from cleaning out his Hawkins Parkway restaurant in November. Hawkins says he is closing the restaurant to focus on his catering business, which includes multiple military catering jobs around the nation.

Kevin Hawkins helps out in the kitchen at Divine Catering’s Diana location in 2017.

Billy King and Robbie Black visit the Divine Catering booth during the Taste of Longview in this 2017 file photo. (Michael Cavazos/News-Journal File Photo)

He says those contracts, which take his business to different parts of the state and nation, have strained available time at his 1-year-old restaurant on Hawkins Parkway at Tryon Road — so he closed it Nov. 30.

“I’m on the go,” Hawkins said during a visit to the News-Journal.

In two years, he’s more than doubled his catering staff to meet a steady stream of military contracts that he must balance with bookings for weddings, other events and Divine Catering food truck appearances.

Divine Catering and Restaurant opened at 1188 E. Hawkins Parkway in November 2018 inside the Scotties 2.0 convenience store. The opening happened within months of Hawkins’ closing of a Divine Catering store in Diana.

Hawkins said he’s reached an agreement to continue using the Scotties Bistro kitchen as a commissary. However, he’s looking for a standalone building for storage space and kitchen, and he wants to ramp up meal deliveries through Waitr and Uber Eats apps.

“When the average restaurant slows down at this time of year, we’re picking up,” he said.

A private company got Divine Catering’s foot in the door on military contracts, he said.

His first contract was a seven-month commitment to serve breakfast, lunch and dinner to cadets at the Texas Game Warden Academy in Hamilton, near Waco.

Between January and August, his six-man crew served all the cadets. He was there Sundays through Tuesdays, then returned to the restaurant and private catering events other days of his work week.

Soon, he was getting requests to serve meals at military installations such as a 12-day gig in Savannah, Georgia, to feed at a Army National Guard night operations training event.

He had never been to Savannah before, he said, but during the 15-hour drive there, he was getting asked to fulfill more military catering opportunities.

“I got three phone calls from the state department saying they had three more contracts for me for the next week and a half, and I was going to be here for two weeks,” Hawkins said.

The Savannah assignment called for breakfast at noon, lunch between 6 p.m. and 10 p.m. and dinner from midnight until 4:30 a.m., “So we got no sleep because they don’t sleep. They were training to be prepared to stay up, so they were doing night jumps out of parachutes. We were watching this, and I mean, I’ve seen some pretty cool stuff with these contracts, and it was around the clock for us,” he said. “We just kept rotating.”

While the six-person staff continued the rotation in Georgia, Hawkins drove back to Longview for about three days to handle two other bookings — a 250-person wedding and a 650-person event at Maude Cobb Convention and Activity Center — for his other 22 full-time and part-time employees in East Texas.

“I was here for 37 hours, and I went right back to Georgia,” Hawkins said. “That’s how tough this has gotten for me.”

His catering workforce has expanded from a dozen employees two years ago to as many as 29 today, he said.

The decade-old Divine Catering and Restaurant location on Mobberly Avenue rests in the control of his mother, Carolyn Hawkins, and he credits the contributions of his brothers Carl Hawkins, Harold Hawkins and Ronald Hawkins as well as older sister Sharundha Hawkins and his 10-year-old daughter, Kadyn Hawkins.

“With my mother, that’s my family. I was there for seven or eight years before I gave her that location, so I already know,” Kevin Hawkins said. “She taught me a lot, so it’s not like that location will ever falter in any way … We have our ups and our downs because it’s family, but at the end we’re always going to gel and mesh and be back loving with each other and everything.”

Hawkins will also continue to balance his business responsibilities with fatherhood and his mentorship of local young people, he said.

Over the past several years, he’s been involved in the city’s Hope for Youth campaign, which has worked to separate Longview young people from violence. He is also involved with Thrive 360 and My Brother’s Keeper.

“It’s a tough balance, and I get a lot of push from different areas. The thing for me is finding that right balance to make sure nobody feels unimportant in my concentric circle — my close people — and one thing that makes it easy for me is because this little one right here,” Hawkins said, looking at daughter Kadyn at his left side.

Despite closing the restaurant, military contracts and other bookings seem to keep Kadyn’s dad paid as well.

“I can be pulled in a lot of different directions, but I try to balance it by levels of importance,” Hawkins said. “It’s always family first and then the business, and then my community, but I can tell you that Divine Catering has helped my relationships with my community to be able to give back on a large scale.”