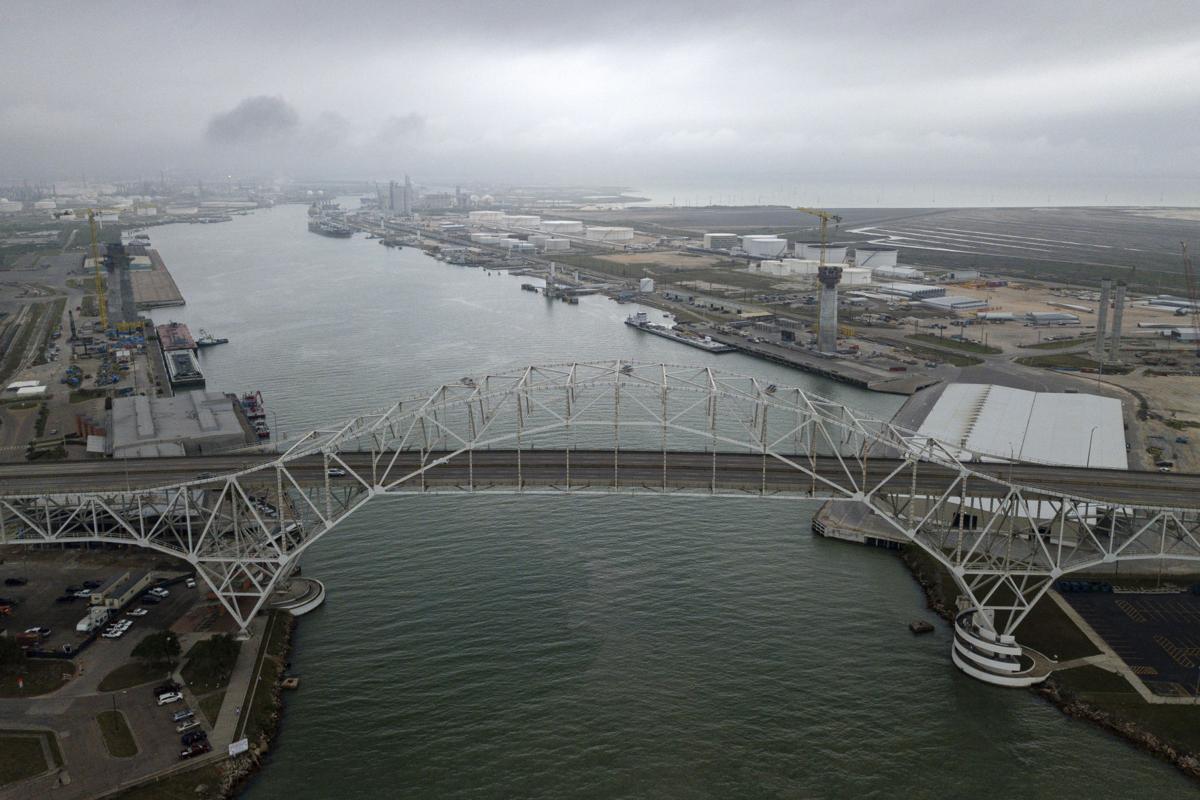 The Harbor Bridge, a 61-year-old span across the Corpus Christi Ship Channel, seen last month. Corpus Christi has become the largest energy exporter in the United States, but several expansion projects have been delayed or scuttled, threatening jobs and investments. 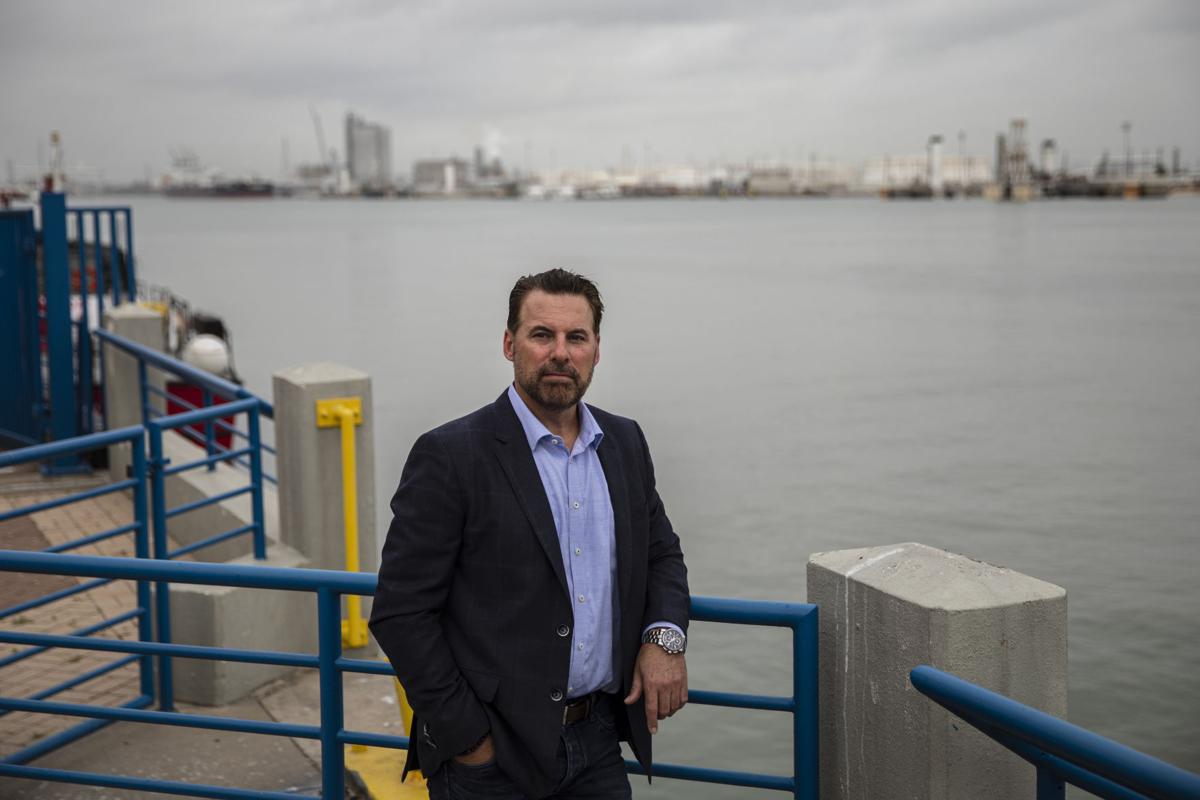 Sean Strawbridge, the chief executive of the Port of Corpus Christi. 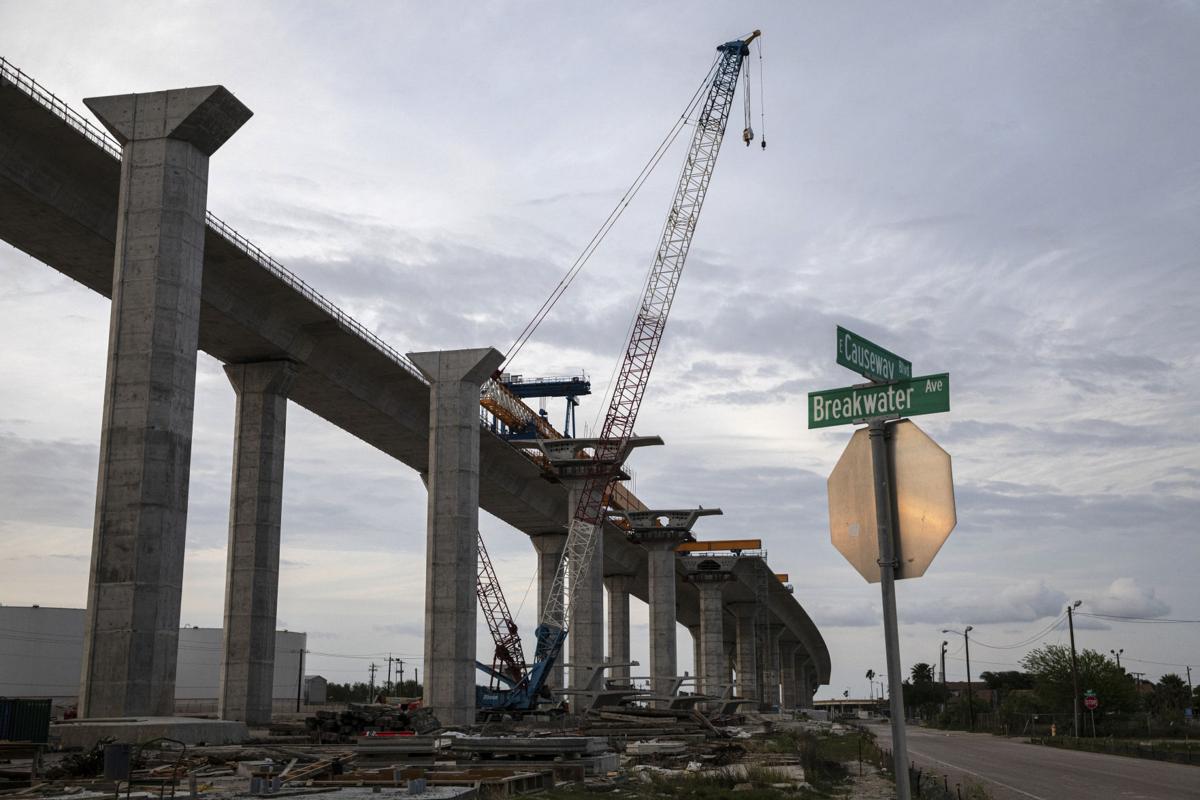 A new span meant to replace the 61-year-old Harbor Bridge across the Corpus Christi Ship Channel. Corpus Christi has become the largest energy exporter in the United States, but several expansion projects have been delayed or scuttled, threatening jobs and investments.

The Harbor Bridge, a 61-year-old span across the Corpus Christi Ship Channel, seen last month. Corpus Christi has become the largest energy exporter in the United States, but several expansion projects have been delayed or scuttled, threatening jobs and investments.

Sean Strawbridge, the chief executive of the Port of Corpus Christi.

A new span meant to replace the 61-year-old Harbor Bridge across the Corpus Christi Ship Channel. Corpus Christi has become the largest energy exporter in the United States, but several expansion projects have been delayed or scuttled, threatening jobs and investments.

CORPUS CHRISTI — Ever since this Gulf Coast city’s leaders helped persuade the Obama administration and Congress to lift the export ban on liquid fossil fuels in 2015, the Port of Corpus Christi has been a steady tide of construction, creating nearly 10,000 permanent jobs and bringing in $54 billion in capital investment.

But the coronavirus pandemic, which has slammed the brakes on economic activity across the nation, threatens to halt investment in planned projects and abandon thousands more new jobs.

The expansion of the port in the years leading up to the crisis produced new pipelines and distribution facilities, export terminals, liquefied natural gas plants, storage depots and refineries. Corpus Christi has turned into the largest energy exporter and third-largest port in the United States by tonnage. Last year, it handled 122.2 million metric tons of cargo, 60% of it exported oil.

But April turned out to be a cruel month for the port’s fossil fuel-based business strategy. After the virus outbreak forced Americans into a lockdown, demand for fuel plummeted 40%, while prodigious production from Texas oil fields added to a global surplus. Oil prices, hit by the double whammy of falling demand and overproduction, have plunged nearly 80% since the start of year.

Natural gas prices, under $2 per thousand cubic feet for months, are at their lowest level since before World War II. Global demand for natural gas has been steady: Corpus Christi still ships more than 25,000 tons of it a day. But the flow of oil through the port has started to slow.

First, he said, construction projects that were underway would continue. Two of them make up almost half of the capital investment of the last four years.

Cheniere Energy, a Houston-based company, is constructing a third production line to liquefy and export natural gas from its LNG processing plant that opened two years ago and has cost $16 billion, according to Industrial Info Resources, a consulting firm that tracks plant construction around the world. And Exxon and Sabic, its Saudi Arabian partner, started construction last year on a 1,100-acre site east of the port’s ship channel for a $10 billion chemical plant to turn natural gas liquids into polyethylene, a feedstock for plastics manufacturing.

Relieving some of the pressure, OPEC members and other oil-producing nations agreed to slash oil production in May and June, a move that is expected to add stability to the market.

“It certainly brings more discipline to the producers, including U.S. shale producers which will organically cut 3 to 4 million barrels per day in U.S. production,” Strawbridge said. “That will have a dampening effect in our export volumes for some period of time.”

Strawbridge and his colleagues were enthusiastic about the $2.5 billion, 650-mile Red Oak pipeline, announced last year by Phillips 66 and Plains All American Pipeline, to transport 400,000 barrels of oil from Oklahoma to Corpus Christi. But Phillips suspended the project in March.

The Red Oak project, the fifth and latest pipeline to transport oil from production fields in Texas and the West, was meant to help the port triple its oil export capacity to more than 5 million barrels a day by the mid 2020s.

A year ago, the demand for oil export capacity in Corpus Christi was predicted to climb to 2.5 million barrels a day by mid-2021 and account for 56% of all U.S. petroleum exports, according to Wood Mackenzie, a research and consulting firm. But in April, oil exports from Corpus Christi started marching in the opposite direction, falling to 1.3 million barrels daily from 1.8 million in January.

Along the port’s ship channel, delays, suspensions and project cancellations are apparent. A plan to build a new oil export terminal on 55 acres in the port collapsed. Two years ago, the port signed a lease agreement with Pin Oak Terminals, a private company, to build the facility. The company terminated its lease in March.

Permico Energia, a Houston-based company, announced in 2018 its plan to build a $700 million LNG production plant on 160 acres near the port. The company has apparently abandoned the proposal, Strawbridge said.

Permico executives did not immediately return requests for comment.

The Corpus Christi port itself, midway through a 10-year, $1 billion capital investment program, decided to suspend construction of a $40 million dock and deferred another $84 million in construction projects to 2021. But a $25 million, 65,000 square-foot administration building is on track to be finished in September.

Across Texas, experts differ on the long-term consequences of the pandemic and low fossil-fuel prices. Strawbridge said that unsold oil is now being stored in 15 tanker ships anchored in the Gulf of Mexico.

Oil fields, refineries, pipelines and export infrastructure have sustained an economic body blow, said Rusty Braziel, the chief executive of RBN Energy, a Houston consultancy that analyzes energy markets. He added that his firm did not see a recovery in growth for another five years.

“The whole picture has changed,” he said. “Every company we deal with has already made decisions to dial things back. Not temporarily. Permanently.”

But others expect a shorter period of disruption followed by a rebound to normal national and global demand for oil.

Industrial companies in energy and other sectors have announced plans for $200 billion in capital investment along the Houston Ship Channel over the next three years, said Vincent J. DiCosimo, director of the Greater Houston Port Bureau, a trade association, who is active in the Houston Port Authority’s plan to deepen and widen the channel.

Energy companies engaged in construction projects in Houston, as well as those in various stages of permitting, have not announced any changes in their plans or construction schedules.

“This is a blip, not a longtime paradigm shift,” DiCosimo said.

There is evidence that other companies feel the same way and are moving forward with their plans in Corpus Christi.

Buckeye Partners joined Marathon Petroleum and Phillips 66 in constructing a $500 million depot to store up to 7 million barrels of oil. The depot, which includes two deepwater docks, is close to opening.

Steel Dynamics, an Indiana company, has started construction on transport facilities for a $1.9 billion plant at a 2,500-acre site in Sinton, a town north of Corpus Christi. The plant is scheduled to open next year.

The new plants, Strawbridge said, join other big port projects under construction and are seen by port executives as reassuring signals that the development momentum will not be lost in the pandemonium caused by collapsing energy prices and the pandemic.

The Army Corps of Engineers, for example, is partnering with the port on a project to widen and deepen the Corpus Christi Ship Channel that is scheduled to be completed in 2022. The port is paying one-third of the $500 million cost, Strawbridge said.

The Texas Department of Transportation is building a $1 billion cable stay bridge across the ship channel to replace the 61-year-old Harbor Bridge.

The port also is working with Phillips 66 and Trafigura, a Swiss company, to build a $200 million underwater pipeline to the proposed Bluewater Texas Terminal oil export buoy 15 miles offshore in the Gulf of Mexico. Phillips 66 applied 11 months ago to the U.S. Maritime Administration for a permit to build the terminal, which is designed to handle 1.9 million barrels a day. It is one of four offshore Gulf terminals under consideration by the Maritime Administration.

But some experts question whether that project will move forward.

“It’s not going to look anything like it has in the past five years,” said Braziel of RBN Energy. “We’re in a different world.”