An empty outdoor seating area at the closed Franciscan Crab Restaurant at Fisherman’s Wharf in San Francisco is seen in late April. 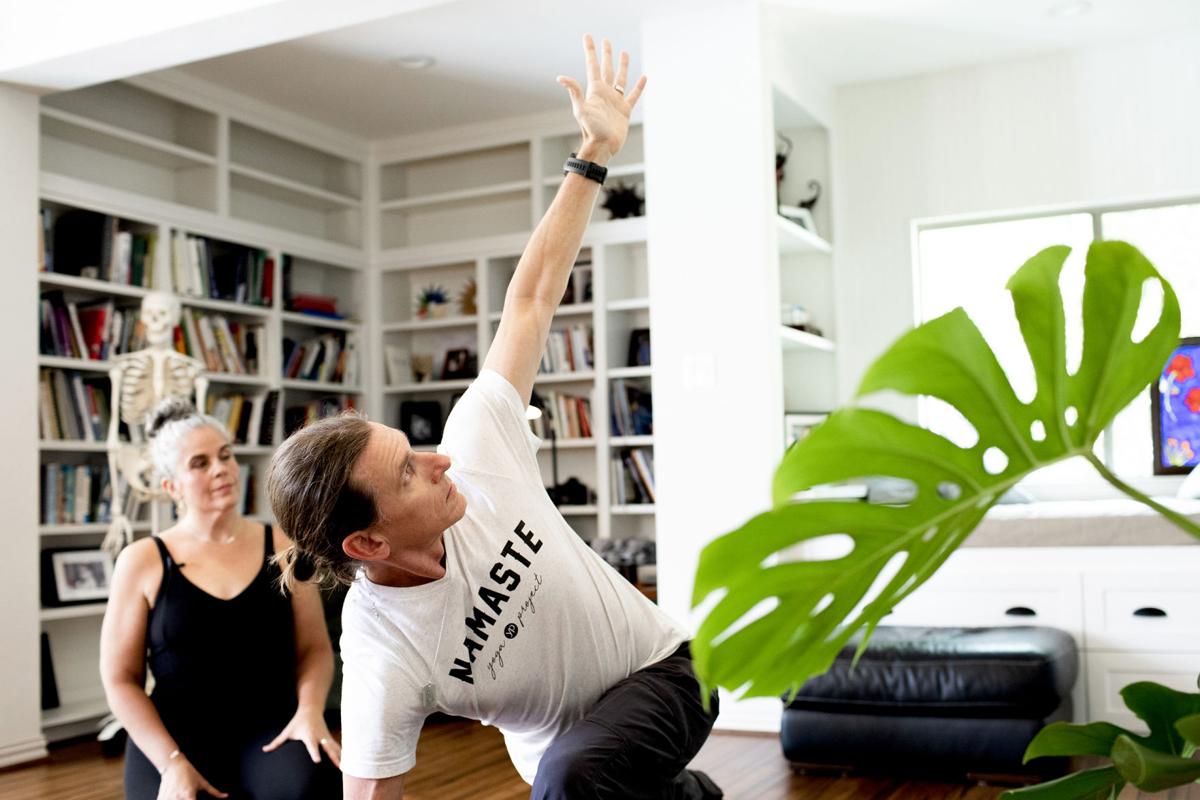 In Fort Worth, Stacy Dockins instructs her husband, Dave Dockins, as they practice for an online yoga class at their home. The pandemic has forced to take their business online only. 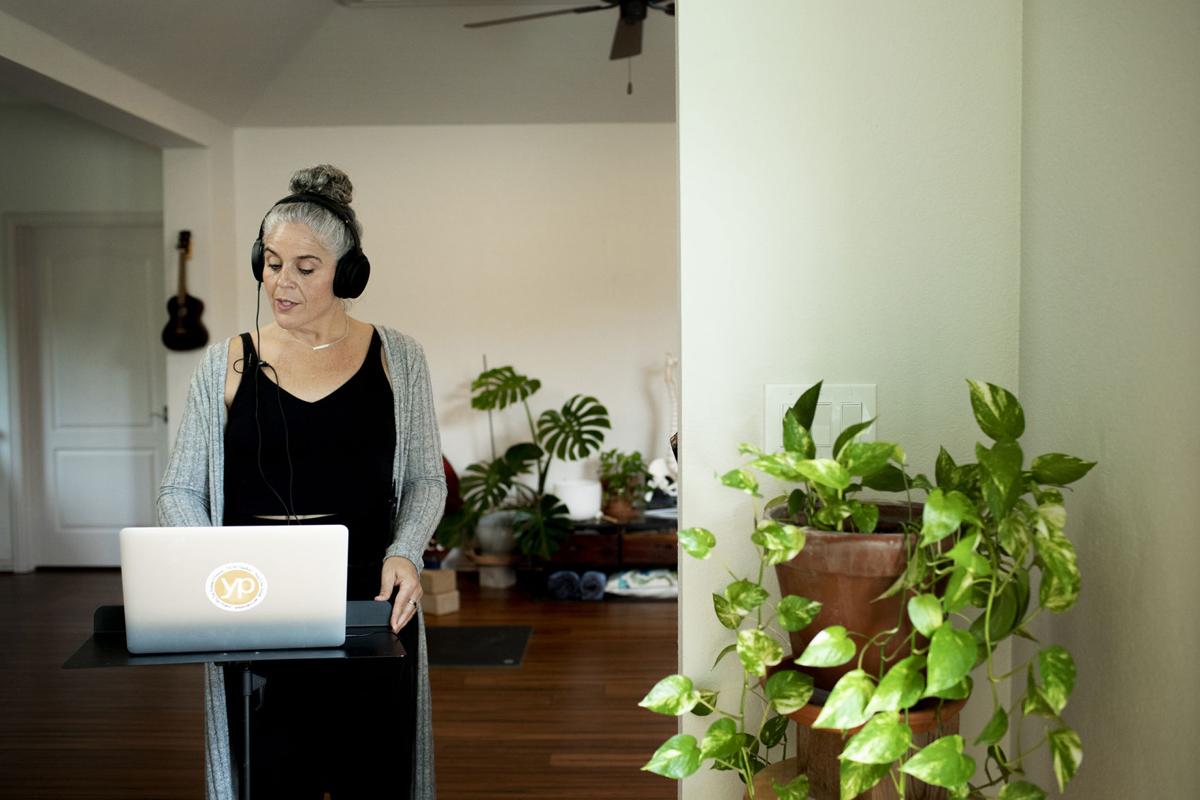 Stacy Dockins tests her microphone at her home as she prepares to lead an online yoga class.

An empty outdoor seating area at the closed Franciscan Crab Restaurant at Fisherman’s Wharf in San Francisco is seen in late April.

In Fort Worth, Stacy Dockins instructs her husband, Dave Dockins, as they practice for an online yoga class at their home. The pandemic has forced to take their business online only.

Stacy Dockins tests her microphone at her home as she prepares to lead an online yoga class.

The coronavirus pandemic is emerging as an existential threat to the nation’s small businesses — despite Congress approving a historic $700 billion to support them — with the potential to further diminish the place of small companies in the American economy.

The rate is higher in the restaurant industry, where 3% of restaurant operators have gone out of businesses, according to the National Restaurant Association.

Tearful, heartfelt announcements about small business closures are popping up on websites and Facebook pages. Analysts warn that this is only the beginning of the worst wave of small-business bankruptcies and closures since the Great Depression. It’s simply not possible for small businesses to survive with no income coming in for weeks followed by reopening at half capacity, many owners say.

The result probably will shift further the balance of power — and jobs — toward big businesses that have a better chance of surviving the uncertain year ahead by borrowing money or drawing on large cash reserves. Emergency actions by the Federal Reserve, backed by the Treasury, have made borrowing money almost free for large companies.

“We are going to see a level of bankruptcy activity that nobody in business has seen in their lifetime,” said James Hammond, chief executive of New Generation Research, which tracks bankruptcy trends. “This will hit everyone, but it will be harder for small businesses since they don’t have a lot of spare cash.”

While 4.2 million businesses have received emergency loans from the Small Business Administration, they constitute a fraction of the 30 million small firms in the nation. Many small-business owners say Congress’ financial rescue is not designed well to help very small businesses, known as micro firms, that have large overhead costs such as rent.

“It wouldn’t be surprising if well over 1 million of these micro firms ultimately fail,” wrote Mark Zandi, chief economist at Moody’s Analytics in a recent note to clients, referring to firms with under 10 employees.

In the 1980s and 1990s, small businesses employed more than half of American workers, but that dynamic has shifted. By 2017, 47% of private-sector employees were at small businesses, and the pandemic appears to be reducing that again.

In April, smaller firms had substantially more layoffs than larger ones, according to payroll processor ADP, an early warning sign.

Losing small businesses often creates a ripple effect in communities, especially smaller towns where little shops and restaurants remain the lifeblood of Main Street. These business owners often depend on each other, meaning as some shutter forever, it can trigger more to follow.

“This is culturally devastating for communities,” said Patrice Frey, president of the National Main Street Center, which advocates for restoring downtown hubs. “Small businesses really help provide communities with a sense of identity and place. It’s very difficult to imagine how these business are going to be replaced easily, especially in more rural and distressed areas.”

After decades in business, places including Ricardo’s Mexican Restaurant in Las Vegas; Biba Restaurant in Sacramento, California; the Great Scott music venue in Boston; and the Tony Ciccarelli barber shop in Troy, New York, are closing forever. Many made their announcements just before May 1 rent was due.

Bridget McGinty is among those who made the gut-wrenching call on May 1 to permanently close.

For 19 years, McGinty and her sister ran Tastebuds, a popular Cleveland lunch spot. The business was on “life support” last month, she said, and she did not think it could survive the summer paying rent and making virtually no money as downtown Cleveland remains largely deserted.

“There were just too many things against us,” said McGinty, still choking up at having to say it aloud.

Congress approved more than $700 billion in relief for small businesses, mostly in the form of Paycheck Protection Program (PPP) loans and grants. The money comes from the Small Business Administration, though business owners apply for it through their bank.

Businesses that are closing permanently say that the process was too slow and that the money only covers about two months of expenses, if that, even though it will probably be months before restaurants, gyms and stores are full again.

Neil Bradley, chief policy officer at the U.S. Chamber of Commerce, is urging Congress to come up with a special “bridge program” to help restaurants, movie theaters, hair salons and other places that won’t be able to open at full capacity for a long time. But negotiations between Congress and the White House on the next economic relief package have stalled.

Another big complaint is that small businesses have to use about 70% of the PPP money on payroll for it to become a grant that does not have to be repaid. Congress designed the PPP program this way to help save jobs, but it is causing problems when rent or other expenses represent a larger share of a company’s obligations, compared to payroll.

“What we hear over and over again is the federal stimulus isn’t really working for the restaurant industry,” said John Barker, president of the Ohio Restaurant Association. He’s urging Congress to build in “at least some flexibility” on how and when the grant money can be used.

McGinty is an example. Her decision to close means her five employees must look for new jobs. After exhausting the $15,000 in cash she had in the bank, she did apply for a PPP loan but quickly realized it wouldn’t work well for her since her overhead costs are equal, if not more, than wages for her workers. On top of rent, restaurants have the added cost of replacing all their food since most of they had in their refrigerators in March has gone bad.

“It’s going to take so long for restaurants to come out of debt or to just break even,” McGinty said. She urged landlords to “just forgive the rent” for April and May. Otherwise it becomes an “unbearable burden in the future” that small business owners will struggle to pay later this year.

The economists who have been tracking permanent small business closures also found that 34% of small businesses said they are either paying reduced rent or delaying the payment, according to a poll conducted April 25 to 27. The researchers have been doing informal surveys of over 50,000 small business owners who subscribe to the Alignable business network. Respondents come from a variety of industries and roughly mirror government data on small-business characteristics.

As business owners debate whether to take PPP money, some are opting to reinvent their business model instead, often by doing more online and reducing staff costs.

Dave and Stacy Dockins spent the last night in April holding hands and coming to terms with one of the hardest decisions of their marriage. The couple has run the popular Yoga Project studios in the Fort Worth, Texas, area for 15 years. But on May 1, they decided to close all three of their yoga studios.

From now on, Yoga Project will be online-only — with a fraction of the former staff.

“We were afraid it would come to this. The money is just running out,” Dave Dockins said after four banks did not process his PPP loan applications. “It’s still really raw for my wife and I. This is the hardest decision we’ve ever made.”

They said closing was their only option because they could no longer afford the rent and other overhead costs. The PPP was a poor option for them because their instructors are usually contractors — 1099 workers — who are not eligible for the payroll money.

Another issue with the PPP loan is that it covers eight weeks of expenses, and the money must be used as soon as the business owner starts receiving it. That’s tough for restaurants and other businesses that are still closed or operating with a skeleton crew for takeout. They do not need all of their workers.

Some business owners say the money would be more helpful later in the summer, when they can hopefully try to bring in more customers.

“If restaurants are only allowed to open at half capacity, that is a nail in the coffin right there,” said Justin Barrett, the chef and owner of Piecemeal Pies in White River Junction, Vermont. “Consecutive rounds of PPP should be considered for small businesses until there is a vaccine.”

Piecemeal Pies is a 25-seat restaurant that specializes in British meat pies and cider. Customers used to love sitting at the counter or communal table — attractions that have become liabilities in the era of social distancing. They created “Pie Day Friday” for customers to order takeout, but it is not bringing in much revenue and does not require all nine of his workers.

Barrett got a PPP loan, but the money will be gone by mid-June.

Dave and Stacy Dockins say they are working “the hardest we’ve ever worked in our lives” as they broadcast Yoga Project sessions from their home and try to build up online membership.

McGinty’s Cleveland restaurant is not reopening, but she’s still busy: She spent the past few days donating most of her equipment and furniture to a local Catholic parish’s food pantry and community center in between calls with her landlord, bank and insurance agent.

Each business owner is trying to be nimble, but none is sleeping well at night.