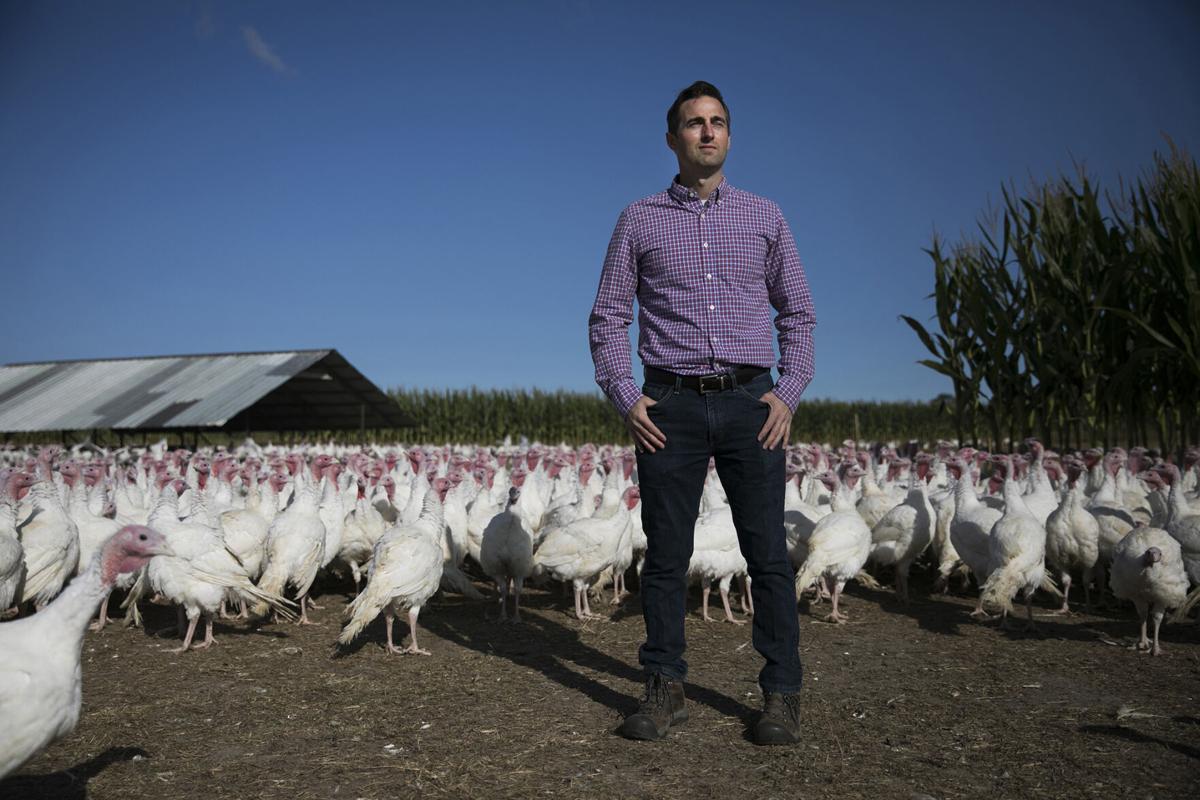 “There are a lot of unknowns for us right now,” says Drew Bowman, shown on his New Carlisle, Ohio, turkey farm in September. 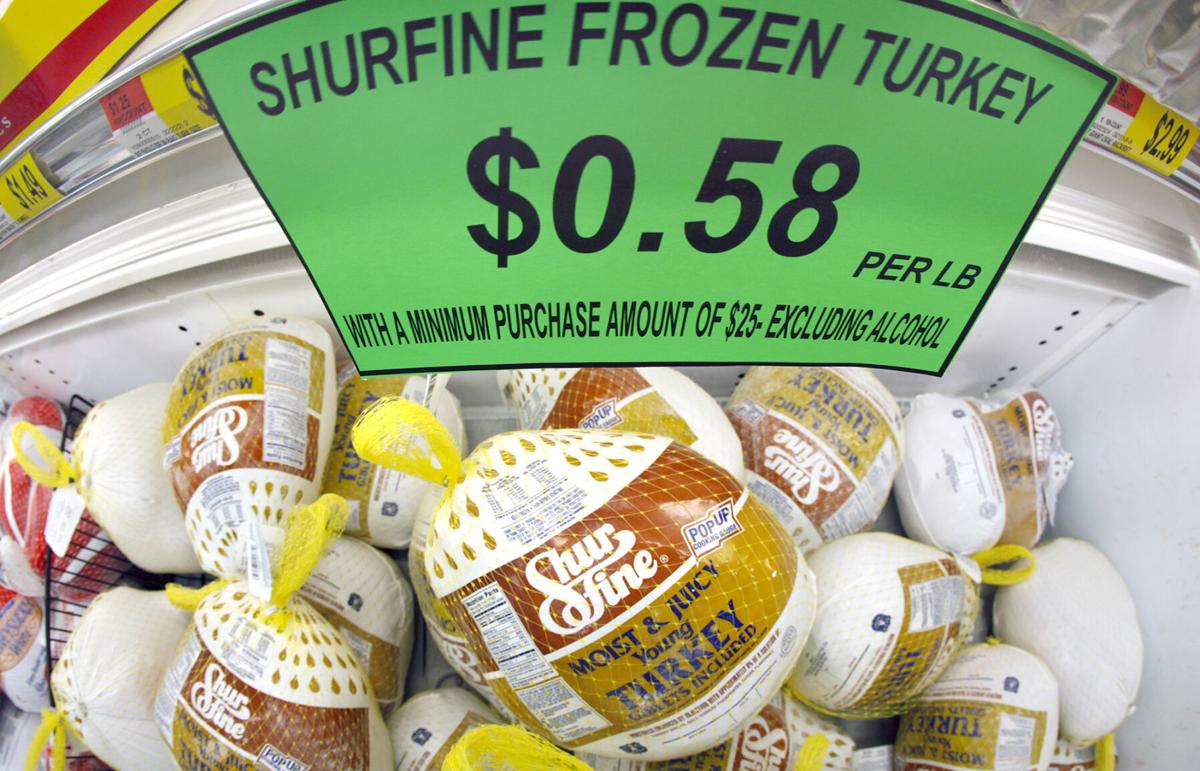 Frozen turkeys are seen on sale in November 2011 at a grocery store in Akron, N.Y. (AP Photo/David Duprey, File) 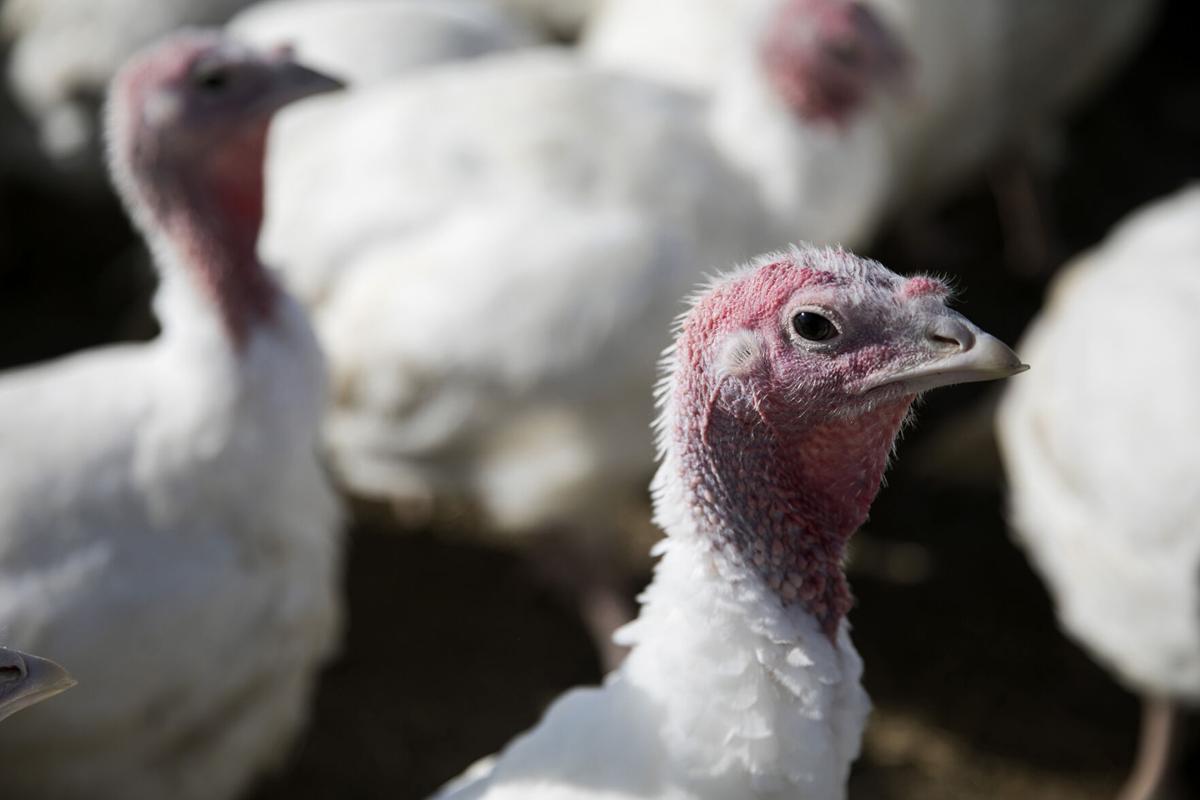 Drew Bowman puts in his orders for chicks, called poults, a year in advance, growing them free-range on 145 acres. 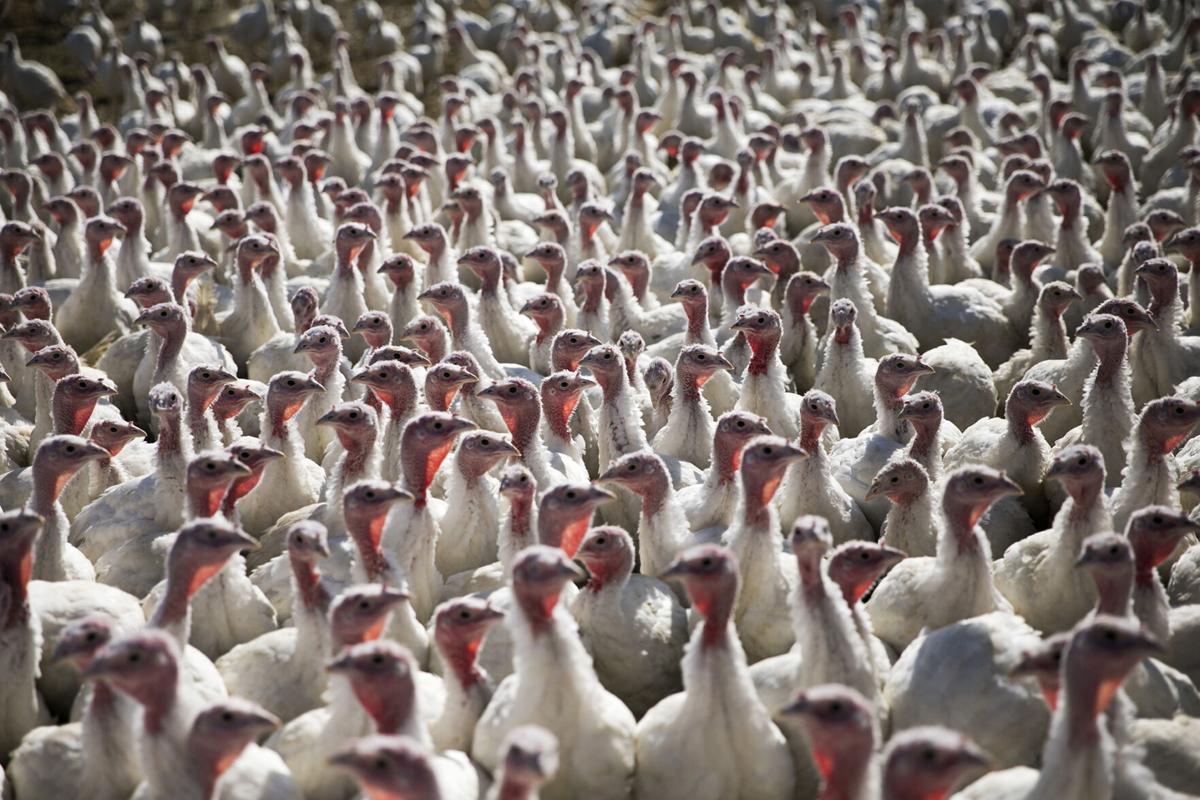 In the fresh turkey business, timing is everything. Problems related to the coronavirus pandemic could throw a wrench into Thanksgiving sales for farms such as Bowman and Landes Turkeys in New Carlisle, Ohio. MUST CREDIT: Photo by Maddie McGarvey for The Washington Post. 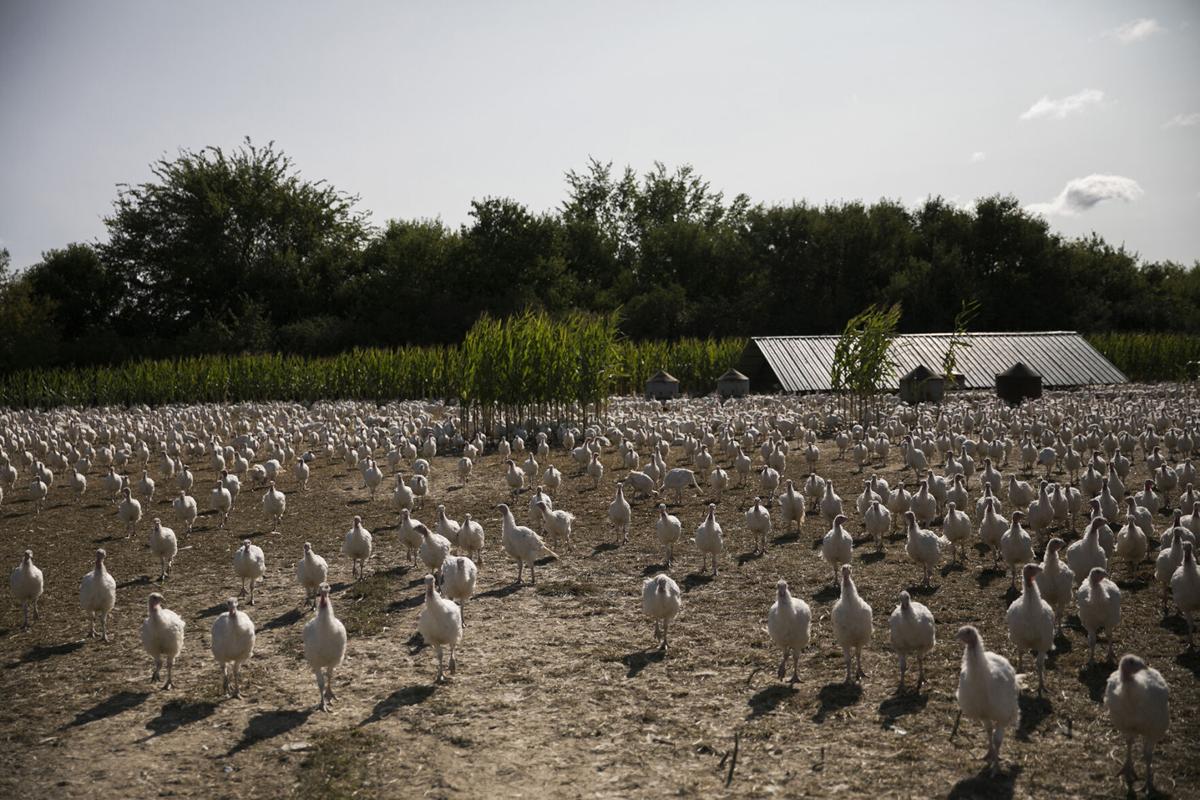 Fresh turkey requires special handling, has its own supply chain and commands a much higher price than frozen.

“There are a lot of unknowns for us right now,” says Drew Bowman, shown on his New Carlisle, Ohio, turkey farm in September.

Frozen turkeys are seen on sale in November 2011 at a grocery store in Akron, N.Y. (AP Photo/David Duprey, File)

Drew Bowman puts in his orders for chicks, called poults, a year in advance, growing them free-range on 145 acres.

In the fresh turkey business, timing is everything. Problems related to the coronavirus pandemic could throw a wrench into Thanksgiving sales for farms such as Bowman and Landes Turkeys in New Carlisle, Ohio. MUST CREDIT: Photo by Maddie McGarvey for The Washington Post.

Fresh turkey requires special handling, has its own supply chain and commands a much higher price than frozen.

It is among Norman Rockwell’s most recognized paintings, known alternately as “Freedom from Want” or “The Thanksgiving Picture.” The aproned matriarch proffering the burnished bird, extended family leaning in toward chafing dish and wobbly aspic.

This spring, turkey farmers around the country had to roll the dice, take a guess: What would pandemic Thanksgiving look like? Would the holiday be canceled entirely, or would it be the Norman Rockwell grandpa carving en masque?

The coronavirus pandemic will interrupt 50 years of steadily increasing turkey consumption, threatening to change holiday traditions forever. Social distancing and travel challenges will mean more, smaller holiday gatherings this November — thus smaller home-cooked turkeys on the table, fewer holiday restaurant reservations and, in an increasing number of households, no turkey at all.

The shift in demand for this most seasonal of commercial animal proteins is causing havoc for turkey farmers, processors and retailers who typically solidify their plans months ahead of the holiday season.

At the country’s 2,500 turkey farms, farmers are trying to predict demand and processing schedules, fear they will be stuck with too many big turkeys and not enough small ones. Processing plant operators, contending with a shorter harvest window and greater handwork in the slaughterhouse, are trying to reduce their workers’ vulnerability to the COVID-19 outbreaks that have ravaged poultry and beef processing plants.

Retailers are scrambling to pivot in real time to more finished meals-to-go, turkey-by-the-pound, turkey parts or even plant-based products to accommodate shifts in demand.

In New Carlisle, Ohio, about an hour north of Cincinnati, Drew Bowman raises 70,000 free-range turkeys annually on 145 acres at Bowman and Landes Turkeys. In a normal year, 40% of Bowman’s business takes place in November and December for holiday meals.

“We always get anxious before the holidays. It’s our busiest time of the year by far, with more work to be done, longer hours, and there are always things that can go wrong,” Bowman says. “But just like any other person, this has been a year with a lot of emotions, with so much uncertainty, and as a small-business owner, it keeps you up at night worrying about the ramifications. There are a lot of unknowns for us right now.”

Outside Thanksgiving season, Bowman’s sales of turkey breast evaporated when demand dried up from colleges and other wholesale food-service customers. And cancellations of state fairs, theme parks and Renaissance festivals destroyed the market for turkey legs.

“Our whole business model is built around having fresh turkeys. We’re not in the frozen turkey business,” Bowman says. They have 10 flocks, orders placed at the hatchery a year in advance so that in the weeks before Thanksgiving, the birds mature to a range of sizes.

For the holidays, Bowman usually raises 80% hens (females) and 20% toms (males), which grow much bigger — median hen size is 16 pounds, toms are over 20. Demand will skew smaller this year, but he committed to his gender split long before the pandemic, and there is not much he can do to slow down growth, he says.

“We didn’t have the foresight that there might be changed consumer preferences,” he says. “And if you’re growing a tom, if you kill it early, it’s going to be very bony and not appetizing-looking. They don’t have a lot of meat on their bones when they are smaller.”

Bowman’s input costs are fixed: Purchasing the turkey poults (the babies, which he buys one-day-old from a hatchery in Canada); mixing, grinding and hauling vegetarian feed to the turkeys; staff to move all outdoor shelters; feed and water to care for turkeys on the range; harvesting and processing costs bags and boxes for packaging turkeys — the list is long.

Other animal proteins have a 12-month sales cycle; a turkey’s rhythm is more staccato.

Growers can’t just harvest birds younger to keep them smaller, and a pivot to frozen is not practical or financially feasible for Bowman. Fresh turkey requires special handling, has its own supply chain and commands a much higher price than frozen.

Bowman’s fresh turkeys go for about $3.69 per pound retail, and he has a special line of Non-GMO Project Verified, free-range whole turkeys retailing for about $4.19 per pound. If everything goes right with Bowman’s 70,000 turkeys, that’s more than $4 million in sales. Frozen commodity turkeys, on the other hand, can be $1 per pound or less, sometimes even free, with grocery stores using them frequently as a loss leader to get folks into stores for the rest of the holiday’s myriad ingredients.

Bowman has his own USDA slaughter facility. For harvesting, he ramps up his employees from about 30 to 130, half of whom are returning seasonal employees and the other half must be trained from scratch. Turkey processing, he says, is a very manual endeavor with little automation. There is too much variation from bird to bird to allow for machine work — so it’s evisceration, scalding, picking, etc., by hand. He says this year, they are adding dividers between work stations, laying in personal protective equipment for workers and putting social distancing protocols in place.

And in the fresh turkey business, where timing is everything, an outbreak could shut him down.

Cliff Pollard, founder of Cream Co. Meats, a USDA-certified processing facility based in Oakland, Calif., says the biggest risk right now for turkey farmers is slaughter. Meat-processing facilities have witnessed massive COVID-19 outbreaks in recent months, prompting closures, slower line speeds and even the destruction of live animals that had nowhere to be processed.

This will be no different for the annual holiday turkey harvest.

“For the small, sustainable farmers who raise a certain number of turkeys to sell fresh just for Thanksgiving, that’s going to be a problem this year. There’s going to be a huge bottleneck in terms of what those ranchers do. The biggest negative impact will be on the smaller growers who committed to their chicks in January.”

“Typically, in the 300 to 500 flock range, you have to bring all your birds in at once and have them slaughtered at the same time. There’s a lot of coordination on the ground — cold storage, packaging, transportation — a lot goes into the timing of Thanksgiving,” he says. His company has been discussing next steps with the naturally raised turkey farmers it works with to determine how to be nimble despite having begun to raise their birds months ago.

The United States is the world’s largest turkey producer and its largest exporter, with 10% of production going abroad, according to the U.S. Department of Agriculture.

Turkey consumption has doubled since 1970, when Americans ate 8 pounds per capita. In 2019, domestic consumption of turkey reached 5.3 billion pounds, 16 pounds per person, according to the USDA. Turkey production was valued at $4.3 billion in 2019.

But this year Butterball, one of the country’s largest producers of turkey products, projects a sizable increase in “immediate-family-only” celebrations, according to spokeswoman Christa Leupen.

The specifics of what dinner may look like has shifted, as well. Butterball said its research suggests consumers are looking for ways to make Thanksgiving easier or simpler and are open to premade sides and reducing the number of visits to the store.

The Butterball Turkey Talk Line, which for 39 years has been answering consumers’ Thanksgiving cooking questions, is predicting greater demand than ever from panicked first-time cooks asking about thawing times and cooking temps.

Pollard says the biggest change will be people thinking a whole turkey is “too much,” opting instead for other entrees or for turkey parts, which will shut out farmers like Bowman.

“If that’s what they are doing, they will likely be buying a more industrialized bird. It’s more difficult for a small heritage farmer to break a turkey down into parts,” Pollard says.

“Some people have gone down to a duck or goose, but still, when you’re talking about Thanksgiving this year, a huge majority of Americans will stick with turkey,” she says. “Everything is falling apart, so we cling to tradition.”

She says that many consumers will buy just a turkey breast, if everybody in the family likes white meat, or a fully prepared dinner from a retailer.

“If they don’t, they have to accept having leftovers for ten days,” she says.

Tofurky, one of the longtime soy-based turkey alternatives, says it has seen a spike in early holiday orders from its retail partners.

Howard says Kroger’s family of stores has increased selections of plant-based proteins to meet the growing demand for vegan, vegetarian and flexitarian options including meatless roasts.

Nicole Johnson, director of the Turkey Talk Line, and her colleagues have been prepping for the holiday via the Teams platform. This year’s seven rookie experts are doing their preseason kitchen and digital training remotely, tinkering with turkey-cooking conundrums in their own kitchens.

Johnson says in an average year, they get 100,000 calls, texts and chats, with 15,000 inquiries on Thanksgiving Day alone. Each of the talk-line experts work nine- or 10-hour shifts on the big day, answering the same questions: How do I thaw? Do I buy a fresh or frozen bird? Do I need to baste? Should I buy a meat thermometer?

“I think we’re going to be busier than ever,” she says. “With smaller gatherings and people not going out to restaurants, I think our numbers are going to soar. And I think part of our job this year is trying to celebrate the good.”