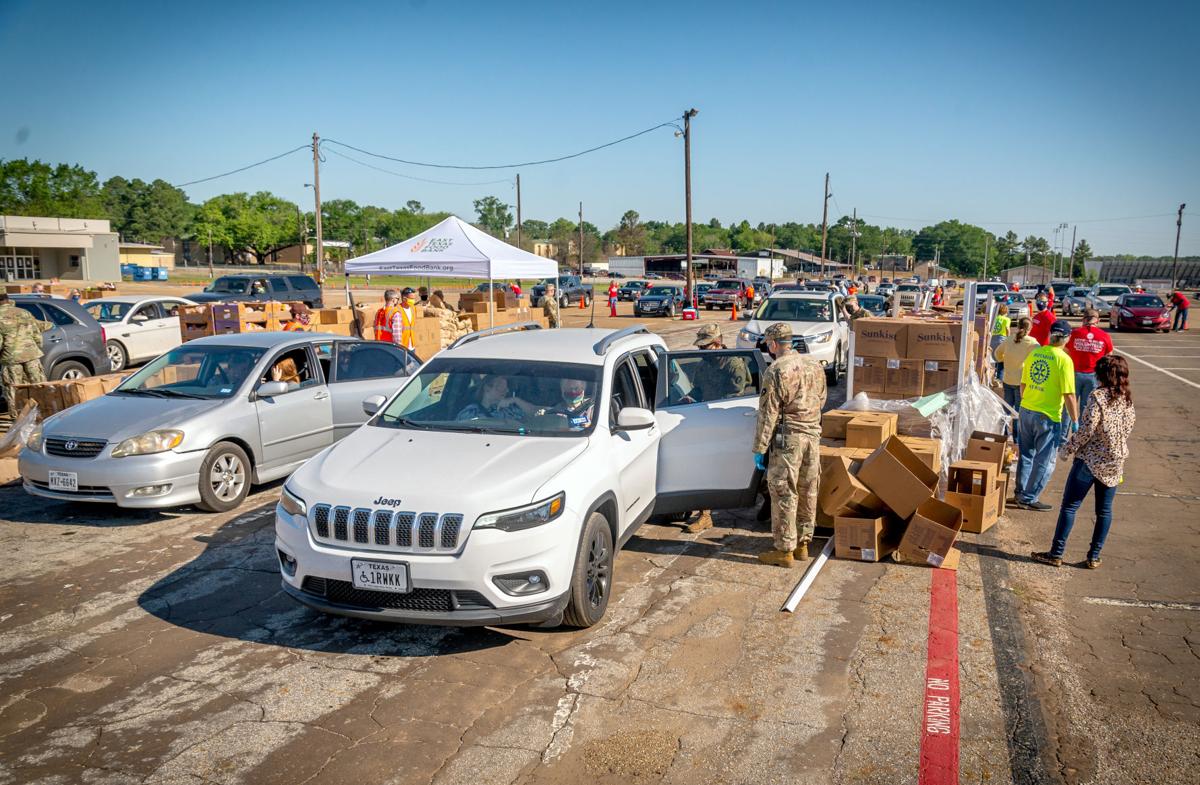 Members of the Texas Army National Guard and other volunteers load vehicles with food at the East Texas Food Bank drive-thru emergency food distribution Thursday, April 30, 2020, at Maude Cobb Convention and Activity Center in Longview. One volunteer estimated 1,000 vehicles had lined up for food by 11 a.m. (Les Hassell/News-Journal Photo) 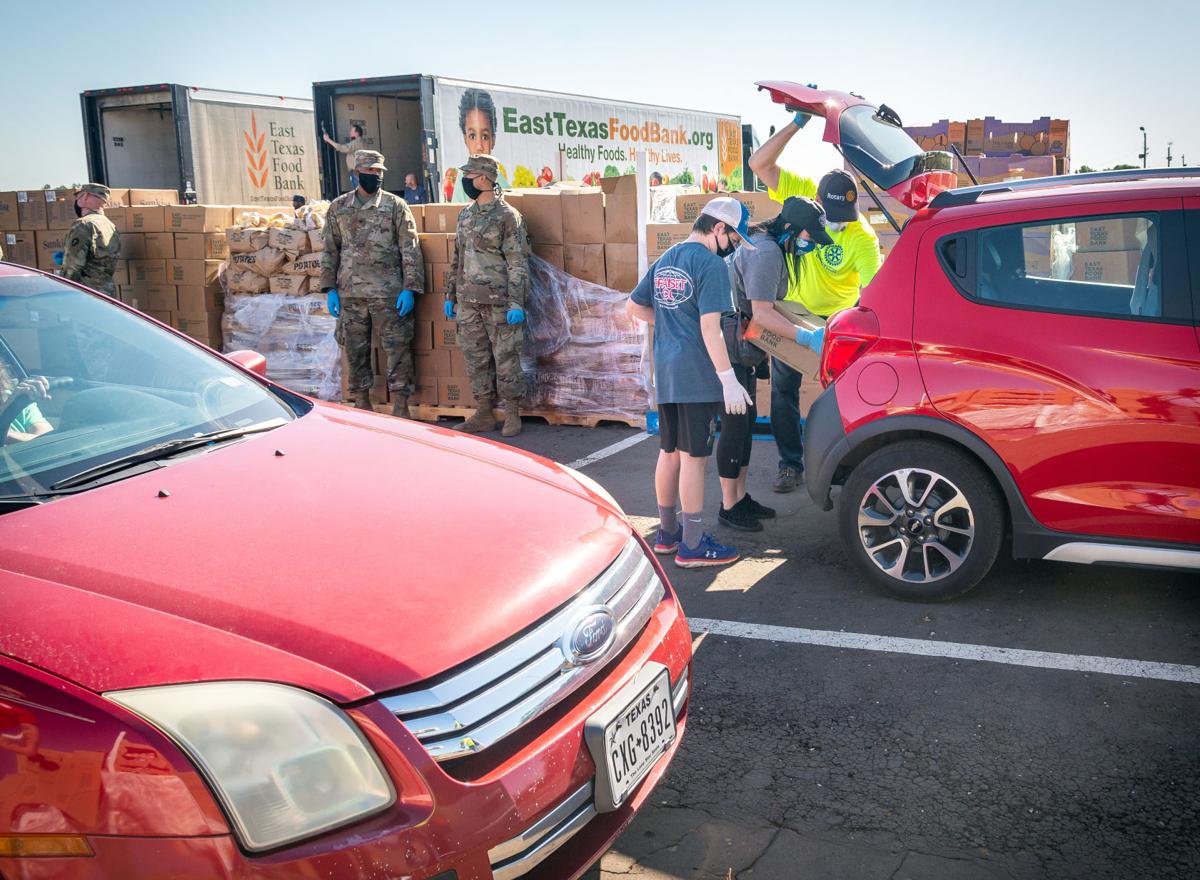 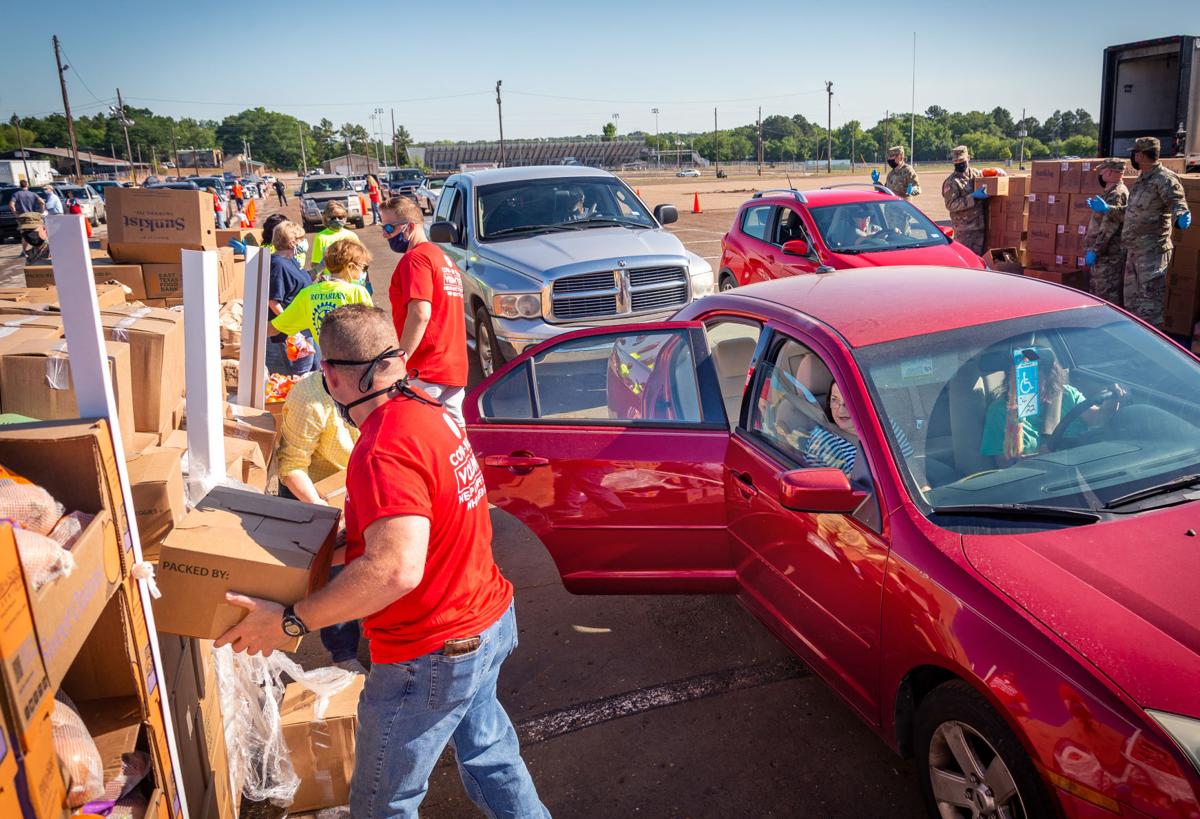 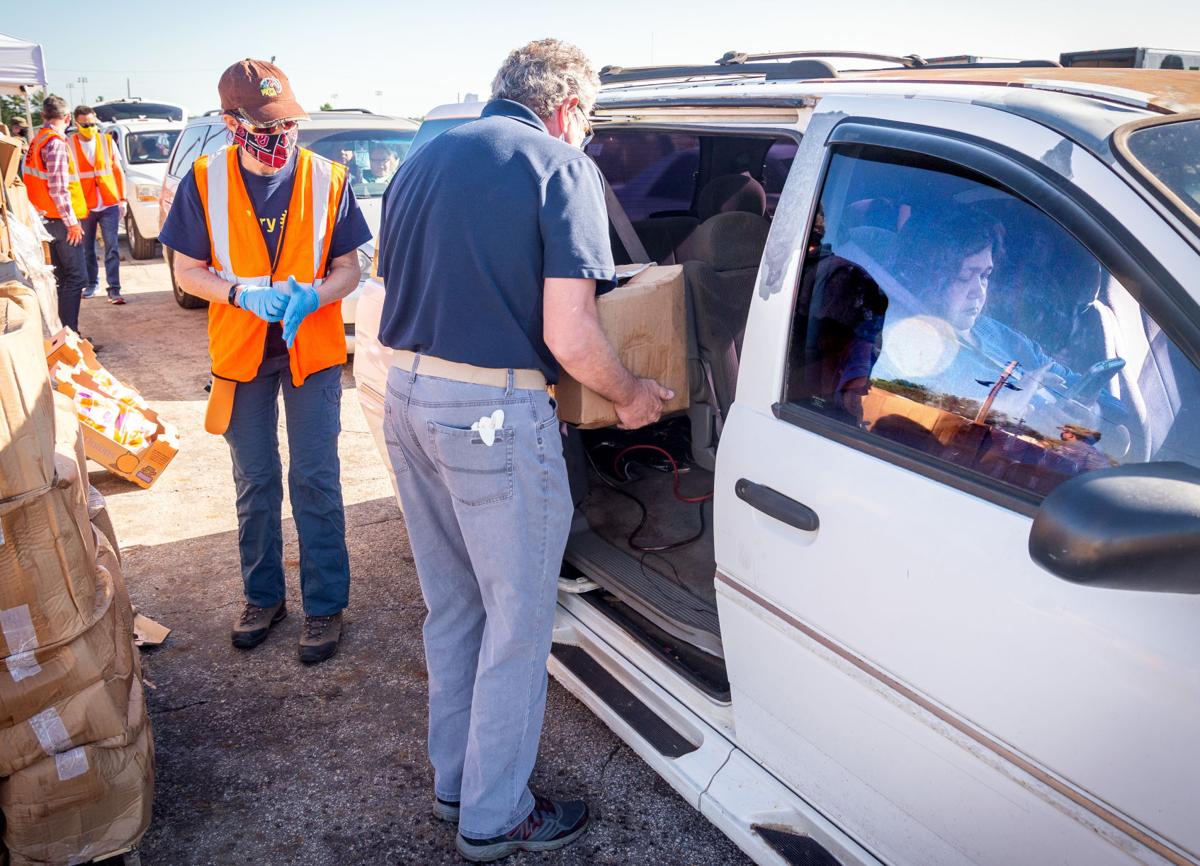 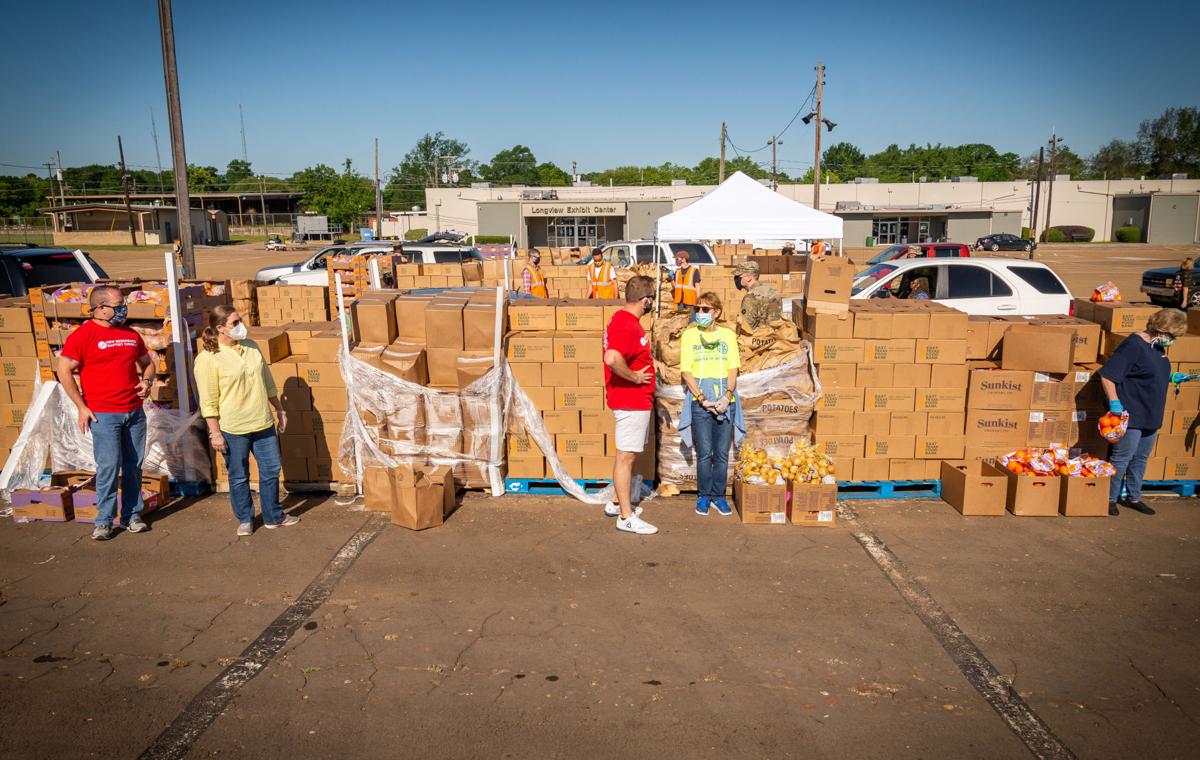 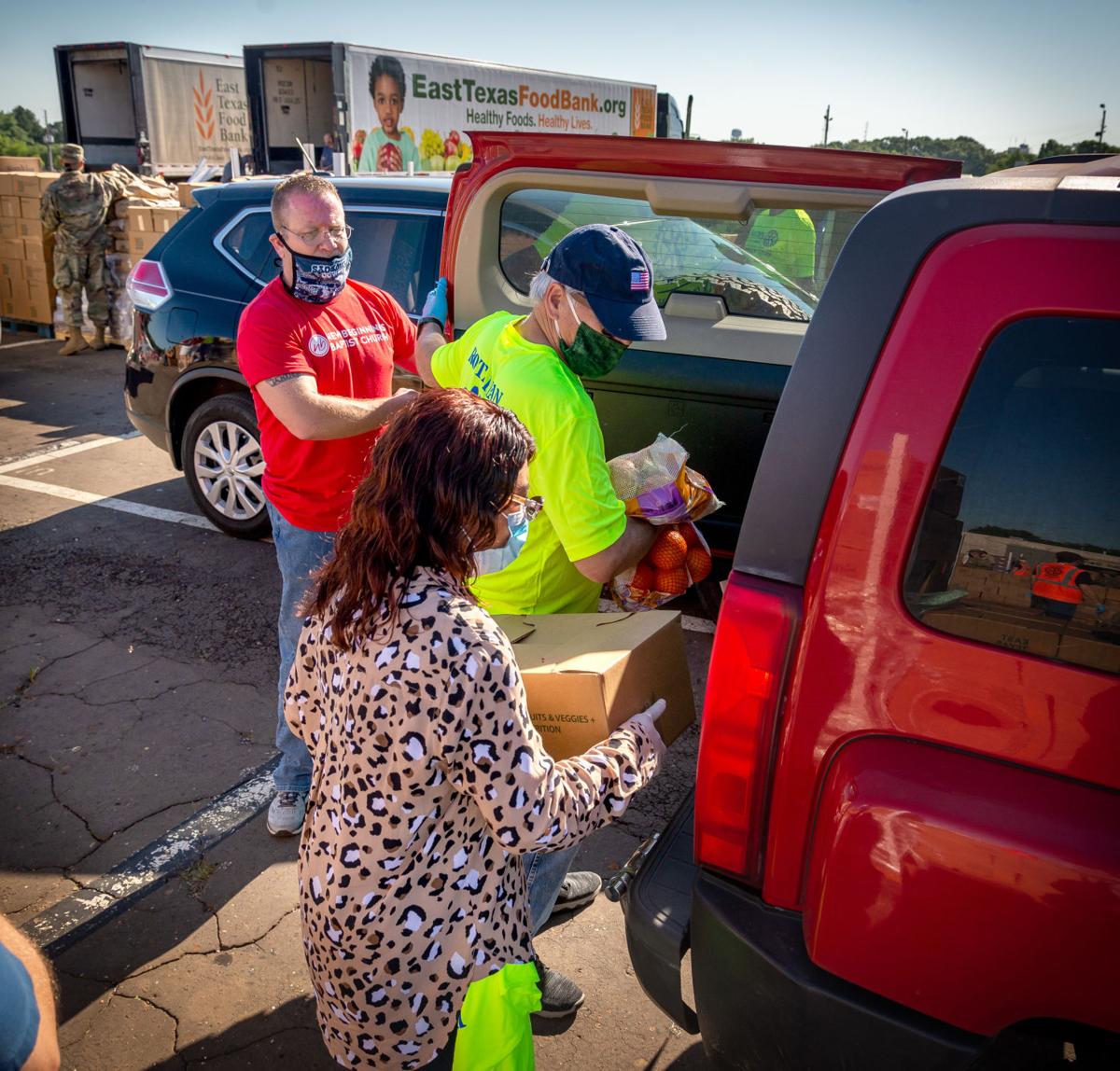 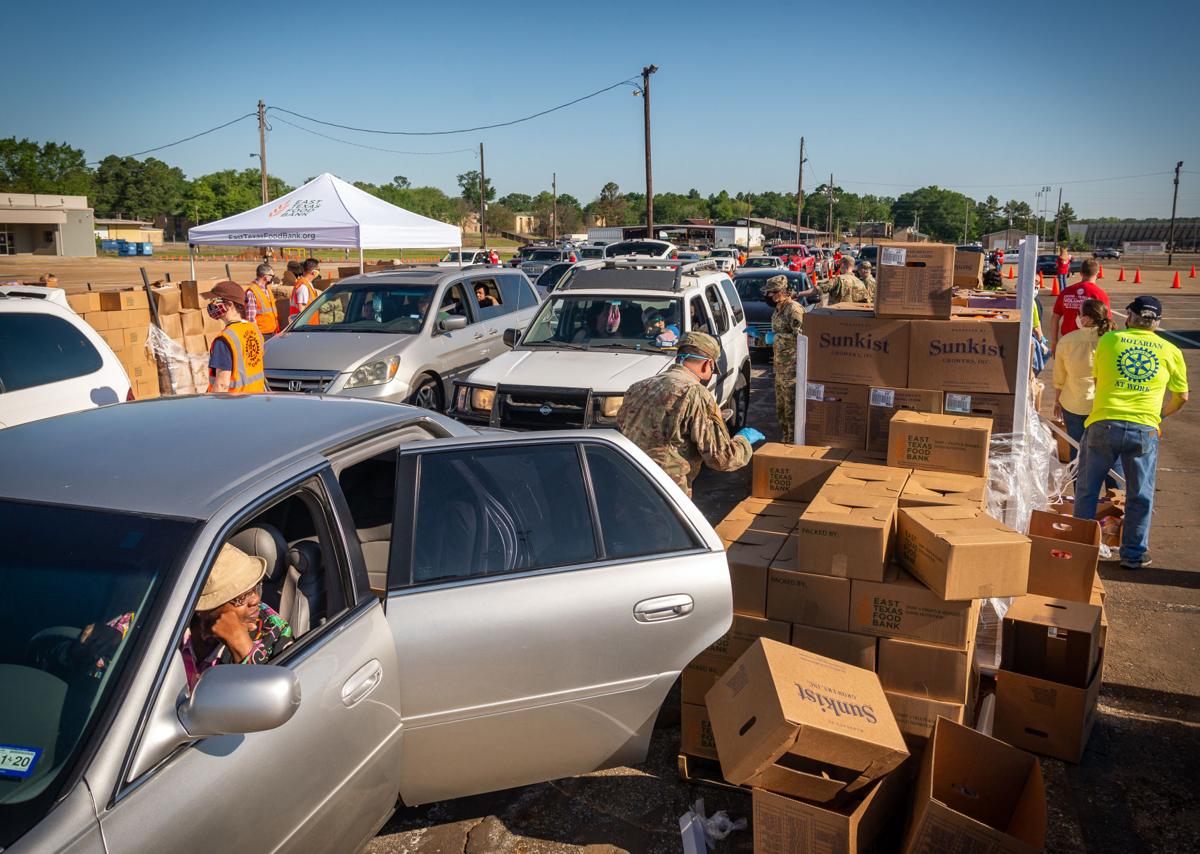 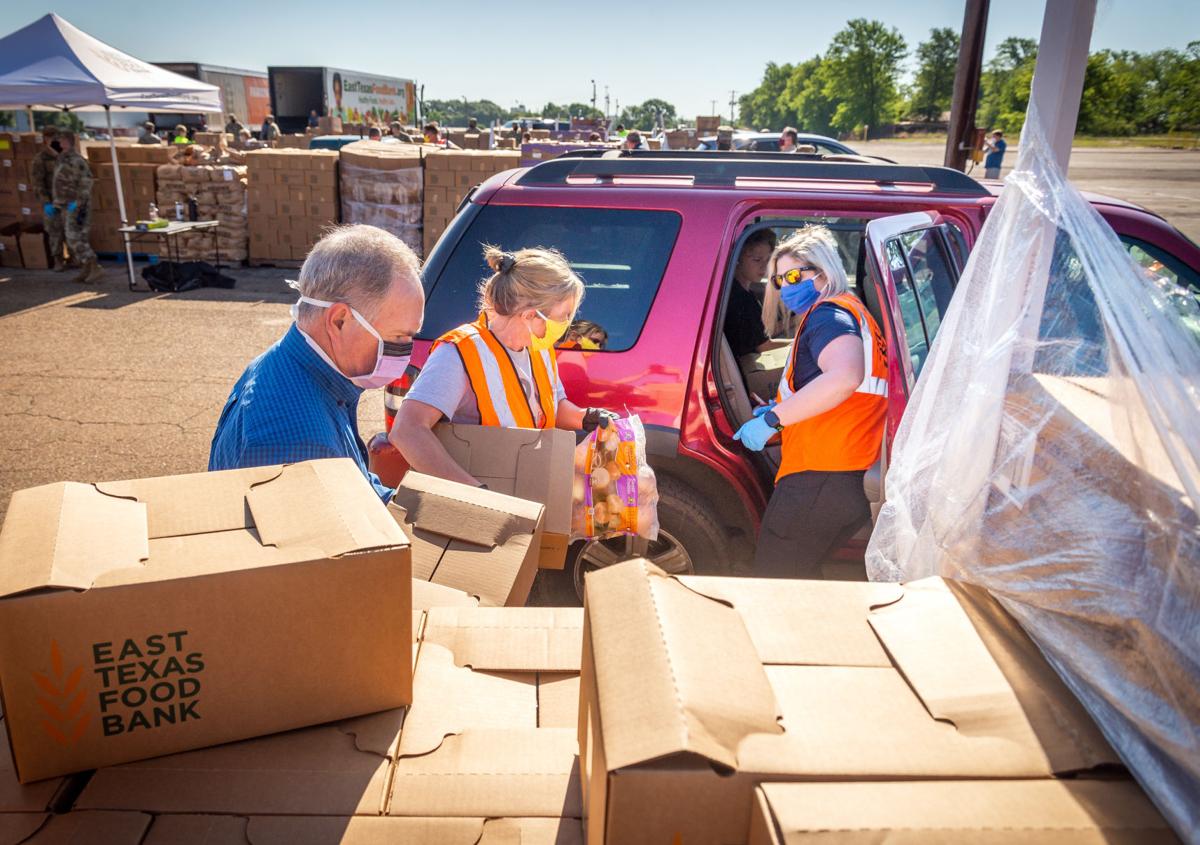 Members of the Texas Army National Guard and other volunteers load vehicles with food at the East Texas Food Bank drive-thru emergency food distribution Thursday, April 30, 2020, at Maude Cobb Convention and Activity Center in Longview. One volunteer estimated 1,000 vehicles had lined up for food by 11 a.m. (Les Hassell/News-Journal Photo)

Martinez said it was the first time since she immigrated from Mexico in 1982 that she visited a food bank. She said she lost her job a month ago after state and local officials shut down restaurants and other businesses to prevent the spread of COVID-19.

She said she lives with her mother and two teenage children, relies on help from family and friends, and appreciated an event such as the one the Tyler-based East Texas Food Bank conducted Thursday.

“I want to say, ‘Thank you,’” Martinez said. “They are doing a great job. God bless everybody.”

Others echoed her words of appreciation to food bank staff and volunteers who loaded their vehicles with one box per household of canned and packaged goods and fresh fruits and vegetables, enough to supply 16 meals. Most of the staff and volunteers wore face masks to protect themselves from COVID-19.

The effort was intended to help people who have been laid off, furloughed or faced reduced hours amid the pandemic, food bank Chief Development Officer Donna Spann said.

“Hunger does not discriminate, especially in pandemics,” Spann said. She said the pandemic has increased the need for food by 32%.

Recipients included Rosa Aguilar, a White Oak single mom to three children. Aguilar’s hours were cut at her patient care job at Christus Good Shepherd Medical Center-Longview, and — like Martinez — she made her first trip to a food bank on Thursday.

“I think this is a blessing, and I thank God,” Aguilar said. “It’s amazing how this group is responding to this need. I appreciate that.”

The Longview event was scheduled to start at 10 a.m. and conclude at noon, but volunteers began handing out boxes at 9:15 a.m. when a line “wrapped around the rodeo arena,” said Michelle Miller, development manager at Transet Co. and a member of the Rotary Club of Longview, which helped organize the event.

She volunteered with her 10-year-old son, Weston.

“I love volunteering,” Miller said. “I think it is important, especially today, to give back to the community that has given so much to me.”

And the National Guard members did more than load boxes in trunks of cars and backs of pickups, Hergenrother said.

“It is extremely rewarding work,” he said. “We have been working really hard at the East Texas Food Bank. We have been building all these boxes.”

As of Wednesday, National Guard members had packed 30,000 boxes with food, enough for 700,000 meals, Hergenrother said. He said regiment members started the project April 8 and expect to have 35,000 boxes filled by late May.

Boxes loaded with meals went to passenger vehicles, pickups and SUVs that arrived. Miller estimated 1,000 vehicles had lined up for food by 11 a.m.

Among those who waited were Longview residents Claudia Gallegos, who lost her job at a retailer and has five children, and Matt Williams, an unemployed actor who lives by himself.

Williams, one of the few recipients who covered their faces, said his roles for TV shows got canceled and is “just living off what I made.”

He expressed thanks to the volunteers and people who donated to the food bank.

The food bank received $84,328 in donations Tuesday from East Texas Giving Day. To make a donation, go to easttexasfoodbank.org and click on “Join the Fight.”