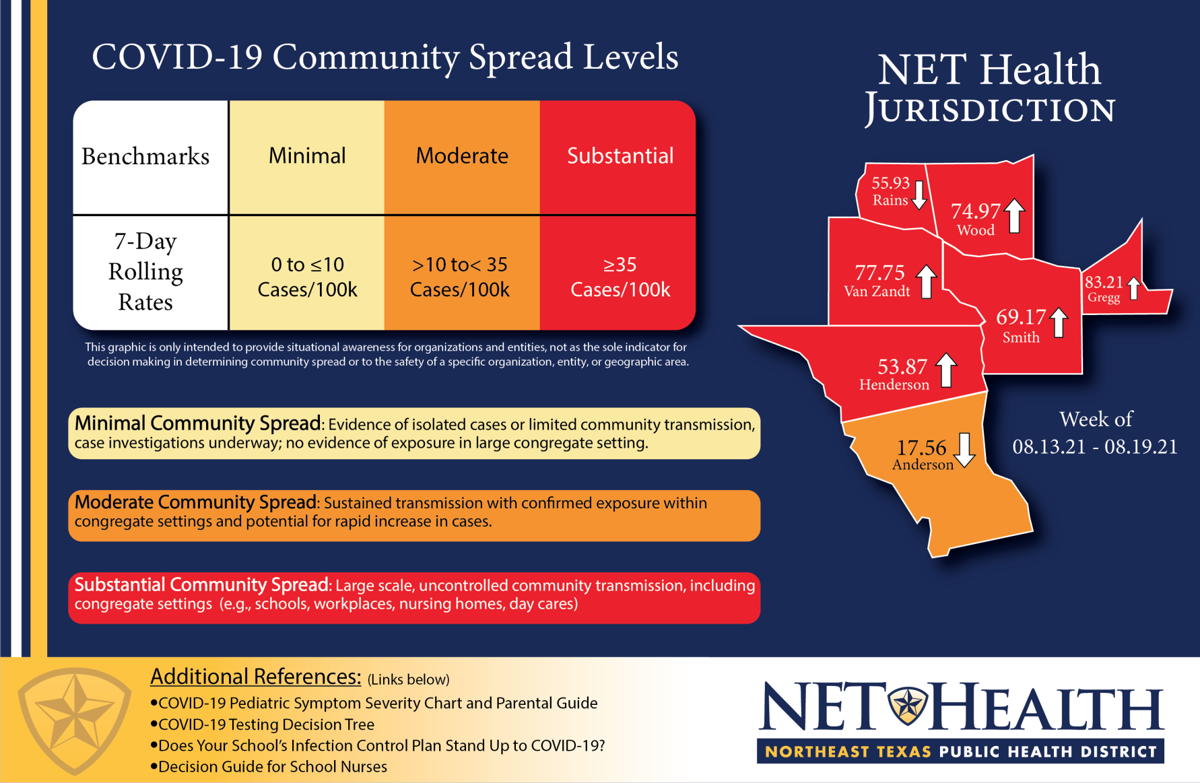 The Northeast Texas Public Health District, known as NET Health, reported 363 new confirmed and probable cases in Gregg County since Monday, bringing the total new cases for August to 1,563 compared with 1,293 through the months of March through July. The spike in new cases shows a continued reemergence of the virus spurred by the highly contagious Delta variant.

The new diagnoses drove the county’s active cases to 1,921 on Thursday from 1,559 in Monday’s report from NET Health.

In Smith County, NET Health reported 540 new confirmed and probable cases of COVID-19 since Monday as active cases for the county rose to 3,468.

Community spread levels increased for most of the seven counties for which NET Health provides disease surveillance. Six of them continue to produce seven-day rolling rates of infection consistent with “substantial” levels of community spread.

With the most recent data, Gregg County has the highest seven-day rolling rate of infection among the seven counties covered by NET Health at 83.21.

The number of people vaccinated against the virus in Gregg and Smith counties continue to lag behind the state.

Statewide, 66.12% of the eligible population has been vaccinated, according to state data.

Henderson County on Thursday had 896 active confirmed cases and 288 probable active cases, according to NET Health. The county has had 122 deaths from the virus.

Van Zandt County had 521 confirmed active cases and 391 probable active cases, according to the district. The county’s death toll was at 76, including 15 deaths with COVID-19 as the probable cause.

Anderson County had 53 confirmed active cases and 185 probable active cases. The district reported the county has had 83 virus deaths as of Thursday.

NET Health reported Wood County had 360 confirmed active cases and 270 probable active cases. The county’s death toll was 85. Out of the total deaths, 18 were listed as probable.

Rains County had 435 confirmed and 412 probable diagnoses. COVID-19 deaths in Rains County were at 14. Out of the total deaths, four were deemed as probable.