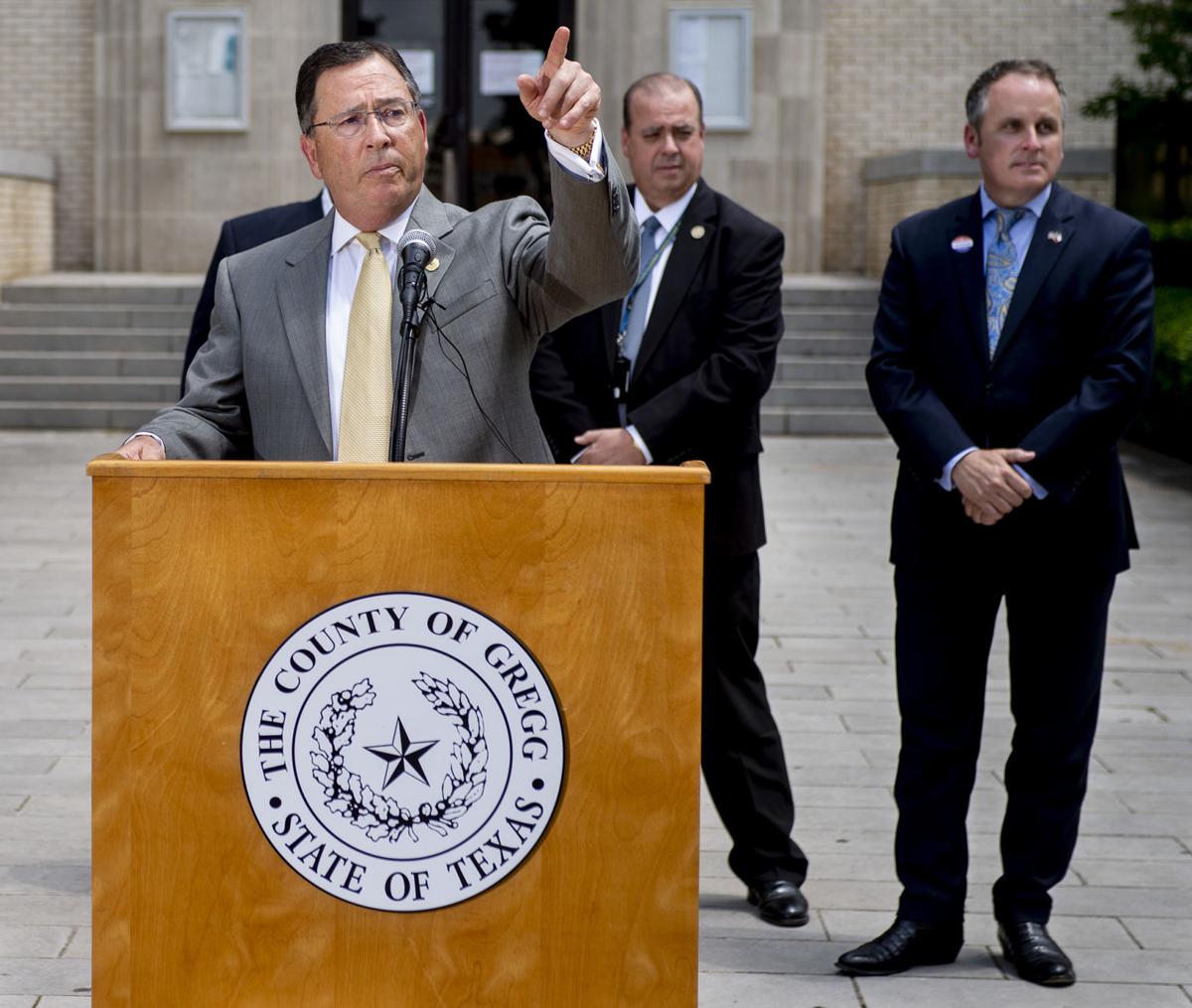 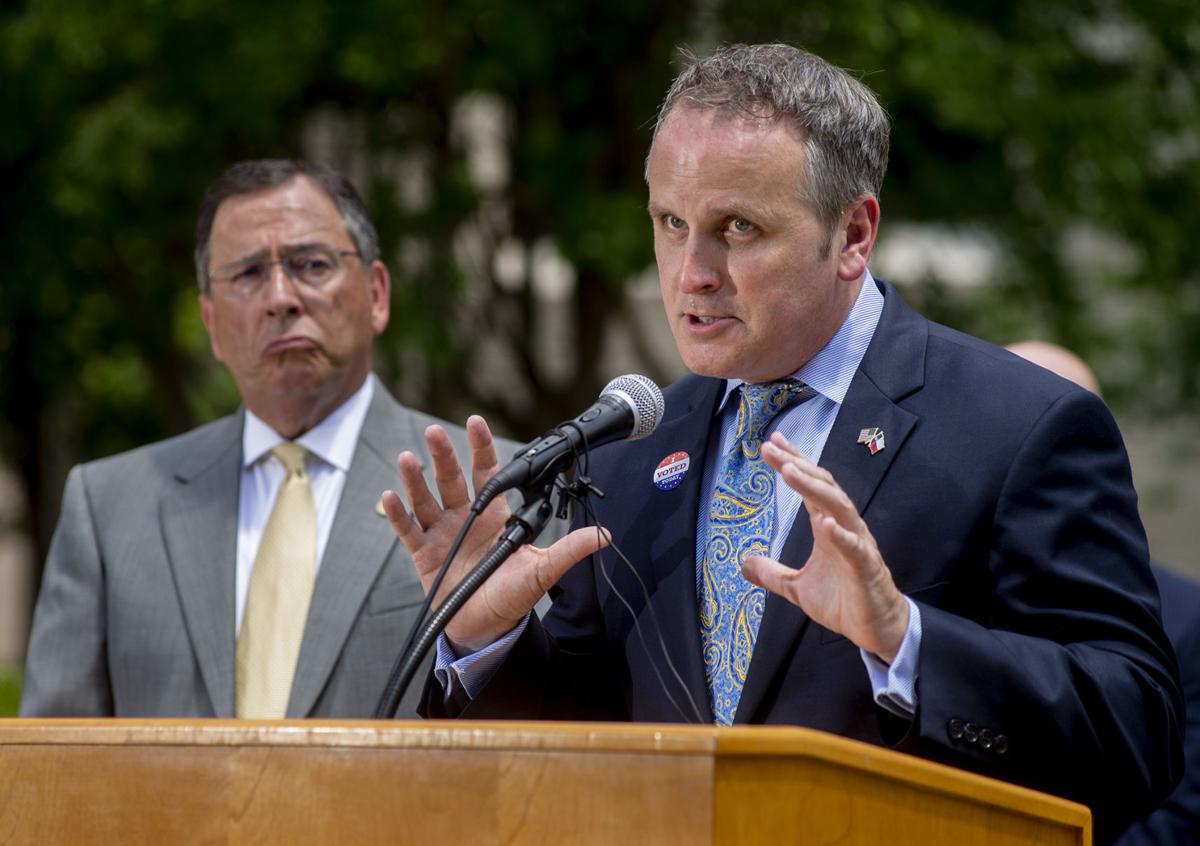 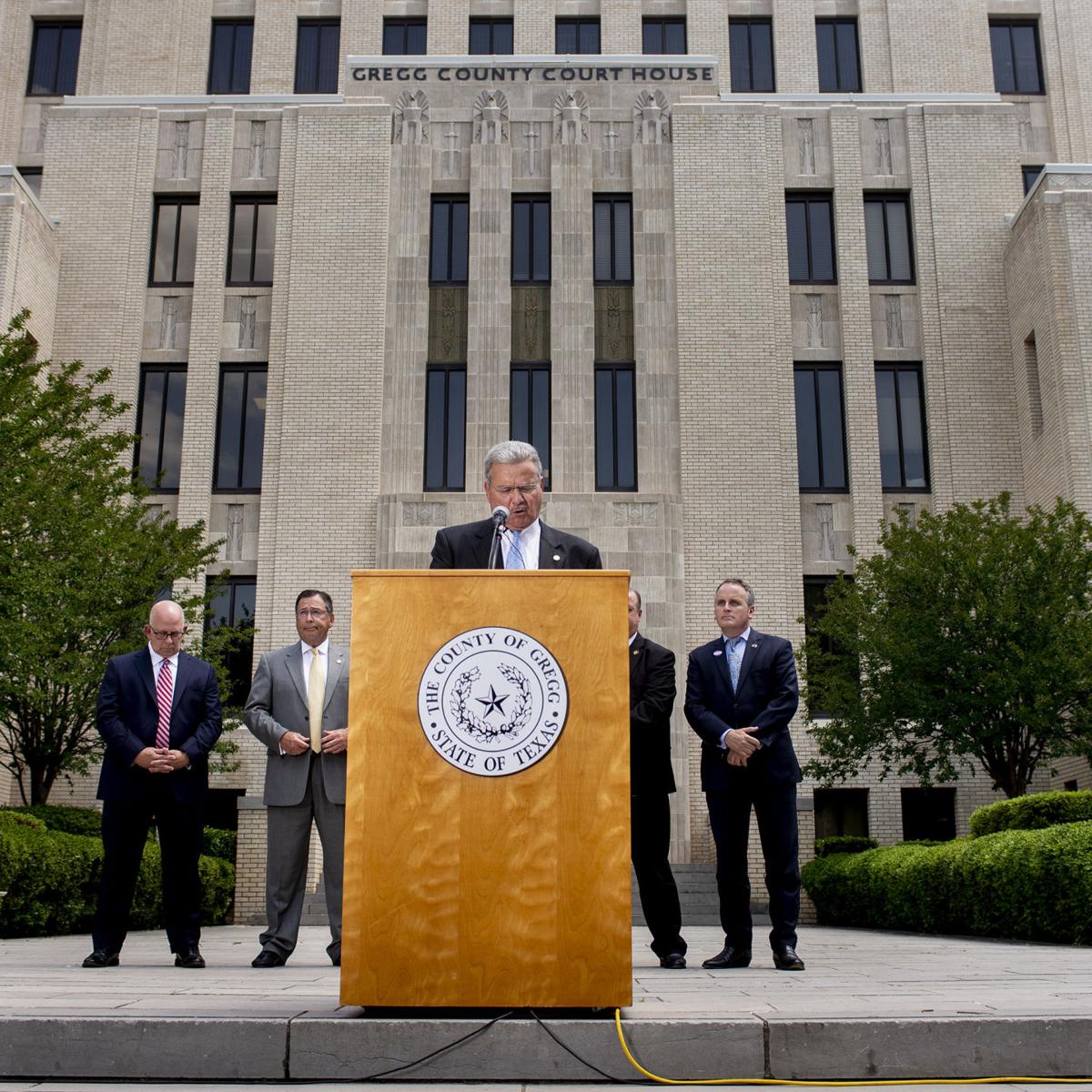 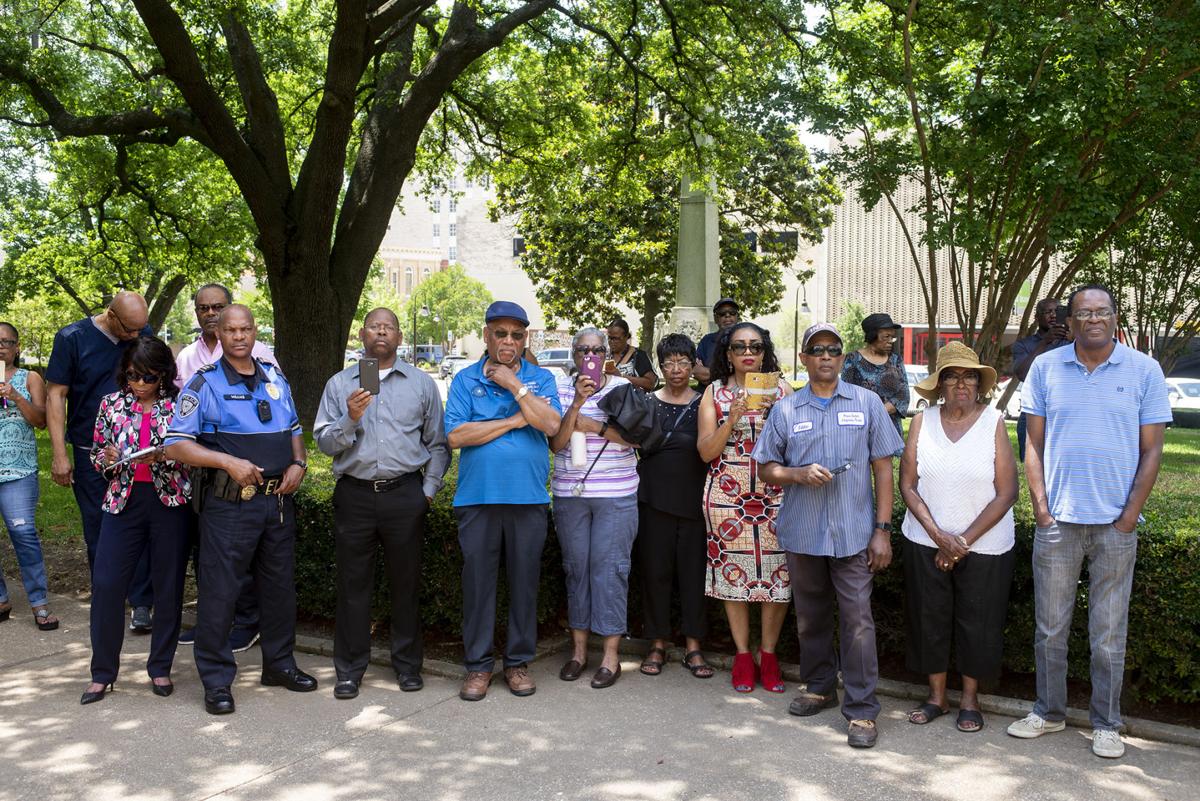 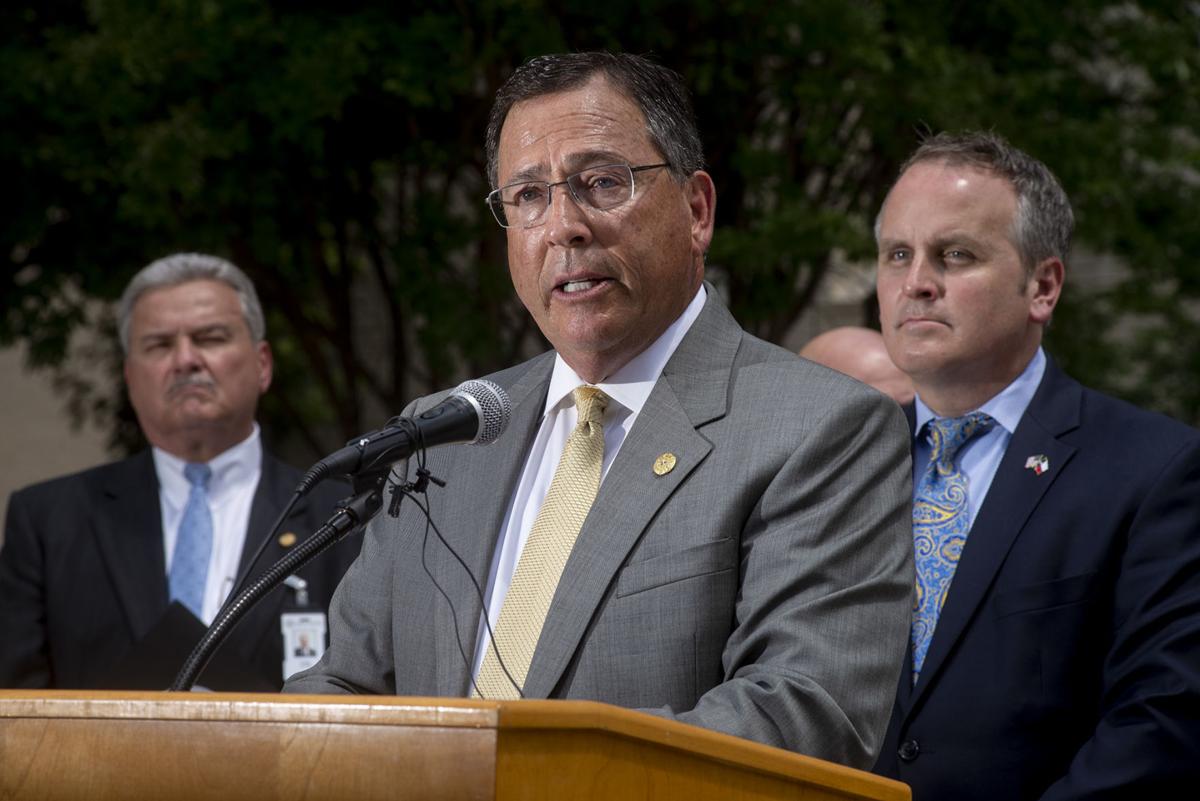 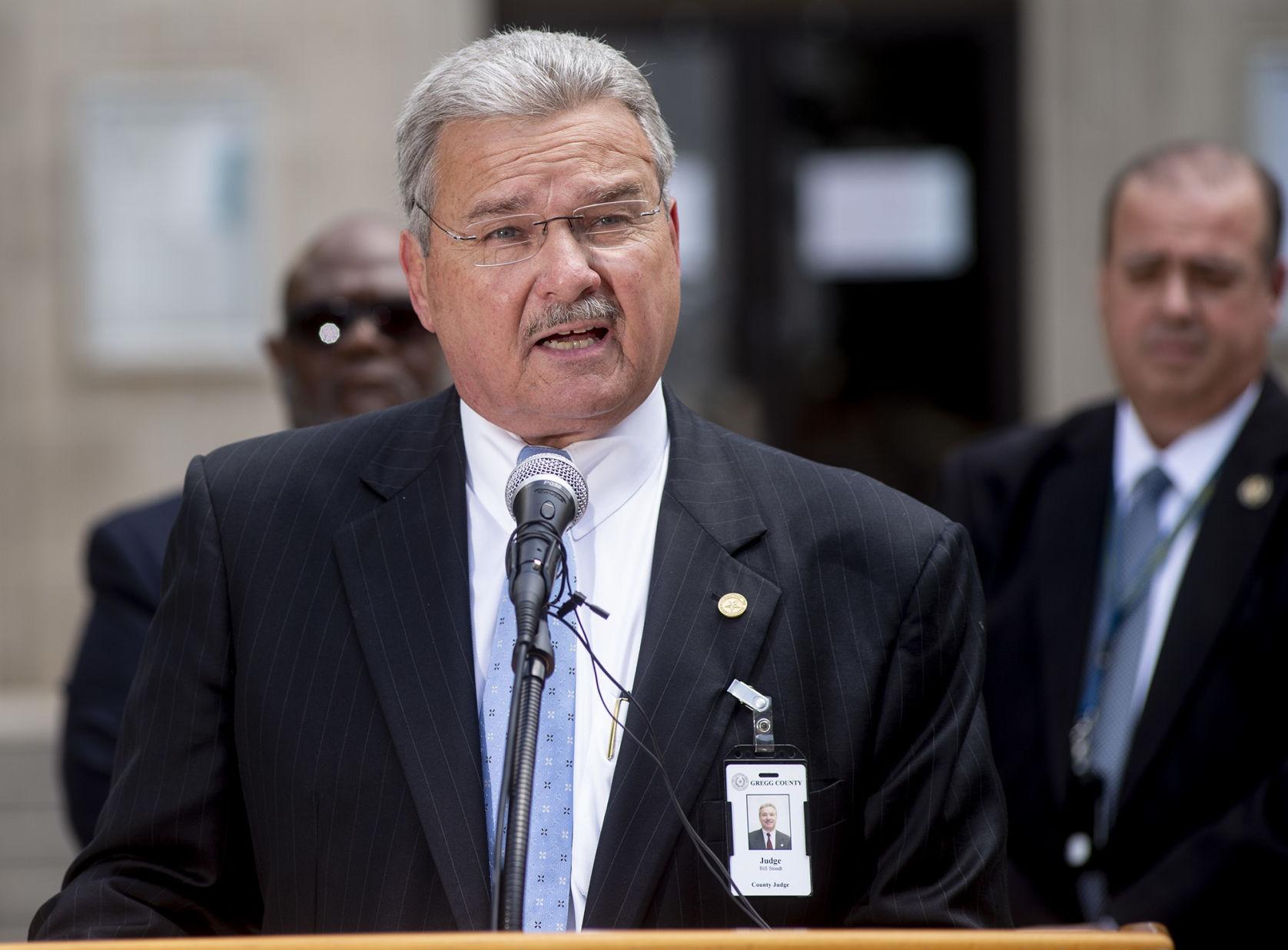 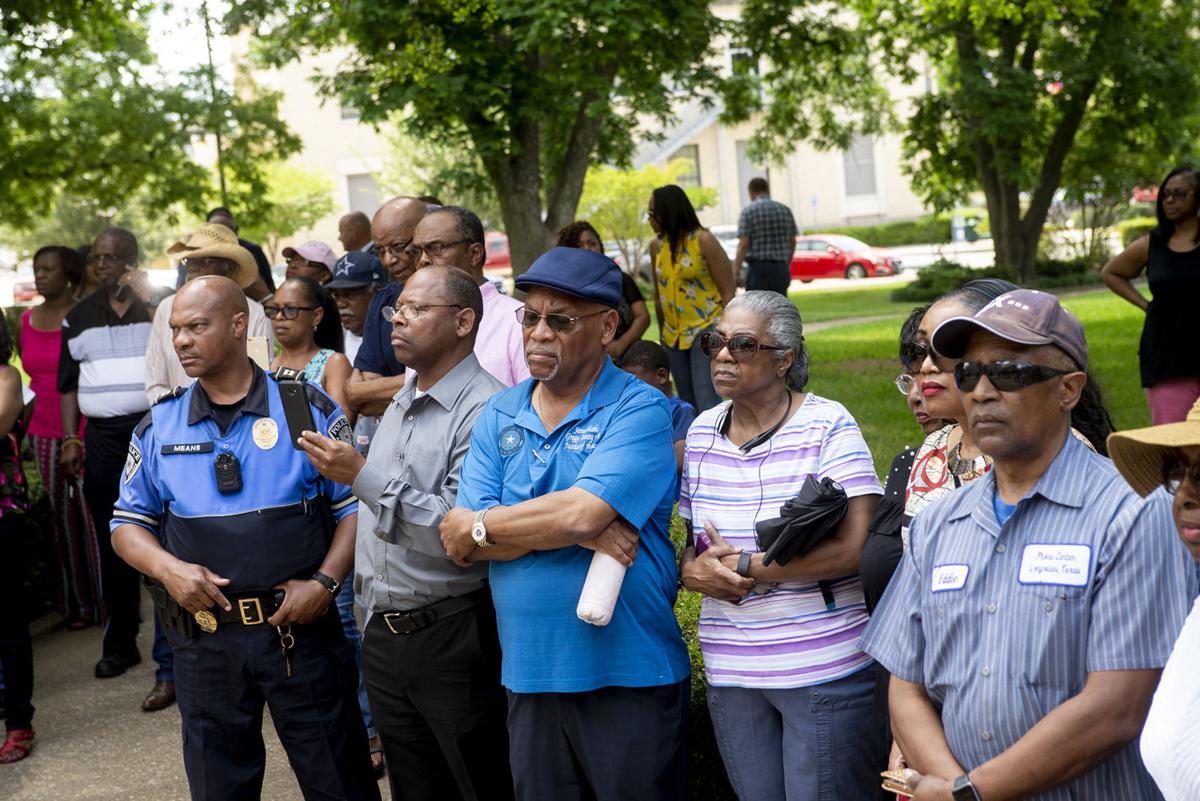 Local and regional elected officials announced Wednesday the state is investigating the unusual number of mail-in ballots cast in the 2018 Pct. 4 Democratic primary race for commissioner in Gregg County.

“That election is over,” state Rep. Jay Dean said, indicating the Texas Attorney General’s probe won’t alter the election of Shannon Brown as the Democratic nominee for Pct. 4 commissioner. “This investigation is about finding out if anybody broke the law, and if so, holding them accountable.”

About one third of the voters using those mail-in, or absentee, ballots made a disability claim to qualify for them.

“These mail ballots stood out for the sheer volume of the number of disabilities (claimed),” Dean, R-Longview, told about 70 people at the Gregg County Courthouse steps. “That’s 39 percent of the mail-in ballots.”

Dean said 2.5 percent of mail-in voters in the other three precincts combined used the disability claim on their applications. (Other precincts had only the governor’s runoff on Democratic ballots.)

“I believe there are honest disabled applicants,” Dean said, flanked by state Sen. Bryan Hughes, R-Mineola, Gregg County Judge Bill Stoudt, District Attorney Carl Dorrough and Sheriff Maxey Cerliano. “But we wonder why there’s 15 times the applications to vote by mail because of a disability in Pct. 4.”

Officials lately have complained they suspect fraud in the mailed ballots but lacked a voter, who has standing to file a complaint, to step forward.

They announced Wednesday that the Rev. D.J. Nelson, a Pct. 4 voter and pastor of Friendship Baptist Church in Longview, filed a complaint Friday with the elections division of the Texas Secretary of State’s Office.

The complaint was forwarded from there to the Texas Attorney General’s Office, which launched the criminal investigation announced Wednesday.

Dean said the mail-in fraud had been going on for decades, and he and others urged more Pct. 4 voters to come forward.

Stoudt encouraged Pct. 4 voters to contact the sheriff’s and district attorney’s offices, which are “ready to help” the state investigators.

That afternoon, it appeared his plea had begun to work.

“Somebody came in my office at 2 o’clock this afternoon and wanted to talk to somebody about giving some information,” Stoudt said, adding that man then spent about an hour speaking with a sheriff’s investigator. “I just think that’s encouraging. The (attorney general) will be reaching out to both departments in terms of a game plan.”

Dean had told the crowd the state probe will take from three to six months.

Williams had hoped to have a local court examine mail-in ballots from her race with Brown. A visiting judge, however, decided she filed her formal election contest after an Election Code deadline.

Some of the five were on the courthouse lawn, including Robby Cox, who Tuesday night had won the Democratic nomination for justice of the peace in Pct. 4.

Tuesday’s runoff between Cox and incumbent Justice of the Peace James Mathis is not included in the state probe announced Wednesday.

The others accused by Wood of harvesting mail-in ballots are Charlie Burns; his nephew, Phillip Burns; Dewayne Ward; and Brown’s wife, Marlena Jackson.

“This vote harvester group has been operating in Gregg County, Texas, for years,” Wood wrote in the filing. “They charge candidates fees for producing mail-in ballots.”

“Yeah, I’m concerned,” he said. “I don’t want to make any statements. The people need to handle it, that’s all.”

Nelson, the complainant, did not attend the announcement and did not return phone and email messages sent Wednesday.

“To my knowledge,” Dean said, “the complaint did not specify any potential (vote) harvesters by name.”

He and Hughes also indicated they will push new laws, in the legislative session starting in January 2019 to help make the mail ballot system less vulnerable to abuse.

Hughes is chairman of the Senate Select Committee for Election Security. The between-sessions committee spent the majority of its first meeting, earlier this year, discussing mail-in ballot irregularities in Texas — with much discussion on Gregg County’s Pct. 4, Hughes said then.

“The fact that it’s here in our home, in our back yard, (means) we really need to clear up this situation,” he said. “It’s not about who won or who lost. It’s about those numbers that scream for an investigation. This is too important, this is too important for us to ignore. If the law was broken, then folks need to be held accountable.”

Dorrough provided information indicating mail-in voter fraud is a state jail felony punishable upon conviction of between 180 days and two years in prison and a fine of up to $10,000.

The Election Code further says the offense becomes a third-degree felony if the voter who was defrauded is 65 years or older. That conviction carries from two to 10 years in prison and a similar fine.

Deja vu all over again with 500-plus mail ballots cast in Gregg Pct. 4 justice of peace Dem runoff

Close to 500 mail-in ballots have been cast in Gregg County’s Pct. 4 justice of the peace ru…

It’s OK for people to have help with certain aspects of voting, but there are limitations.

Kasha Williams took the lead Thursday in the Gregg County Pct. 4 commissioner’s race, and in…

Editorial: Elections officials should give Pct. 4 voting a harder look

Something strange keeps happening in Pct. 4.

After two weeks and 2,072 votes, the Democratic primary for Gregg County Pct. 4 commissioner…