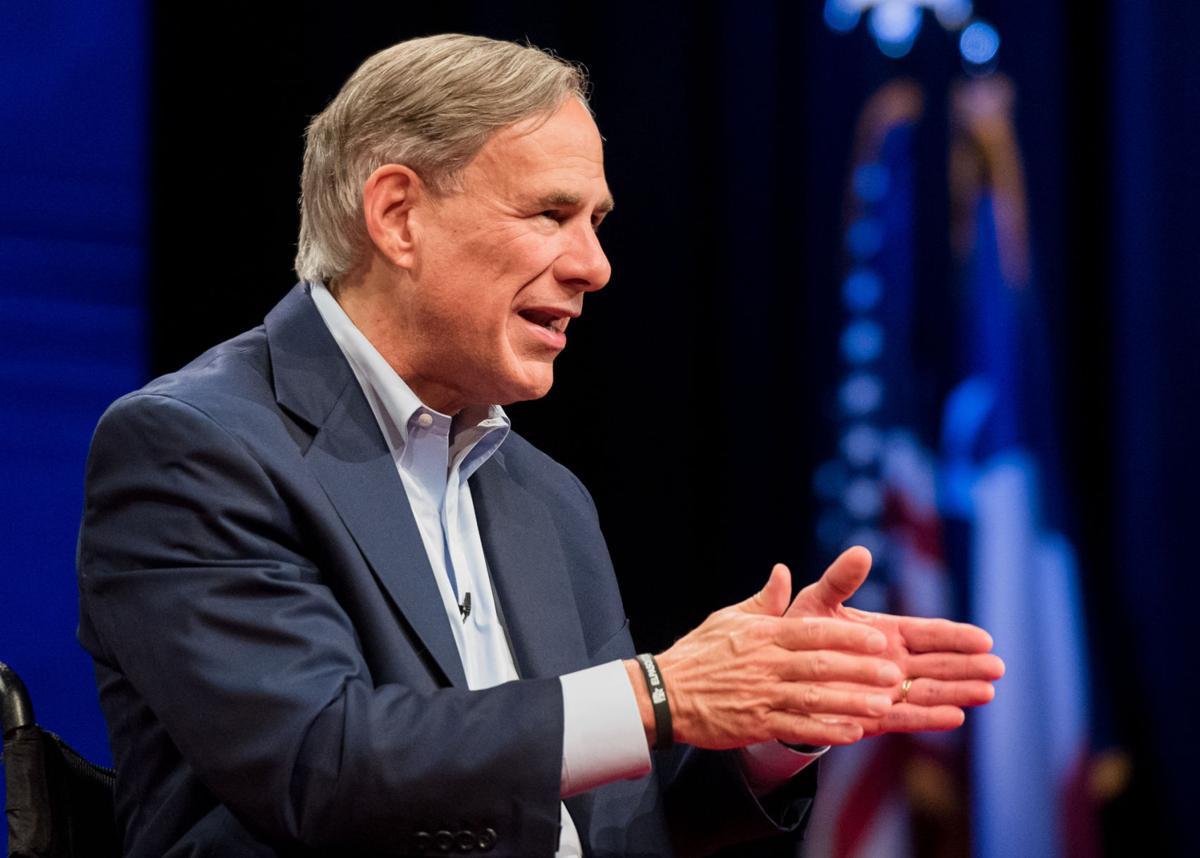 Gov. Greg Abbott answers questions Aug. 15 during a televised statewide town hall at the Cowan Center on the University of Texas at Tyler campus in Tyler. 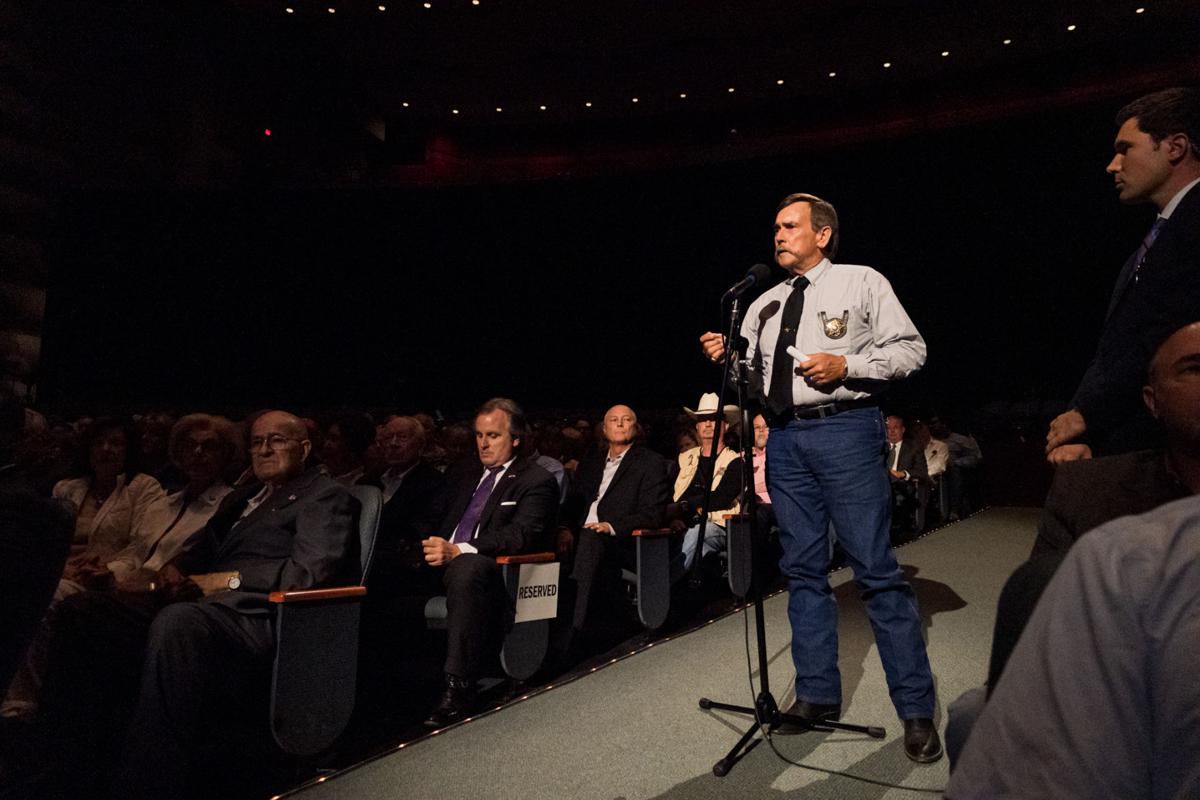 Wood County Sheriff Thomas Castloo asks Gov. Greg Abbott why he’s using state funds to deploy the National Guard to protect the border when it is controlled by the federal government. 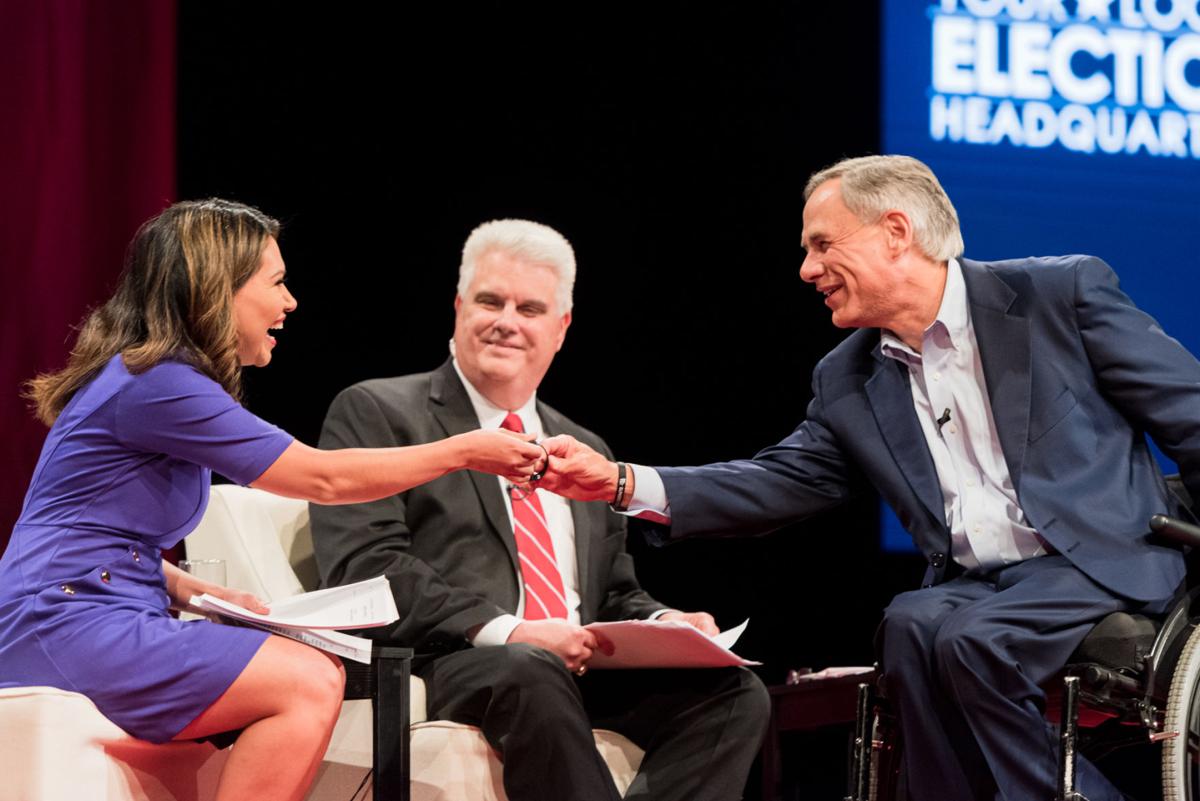 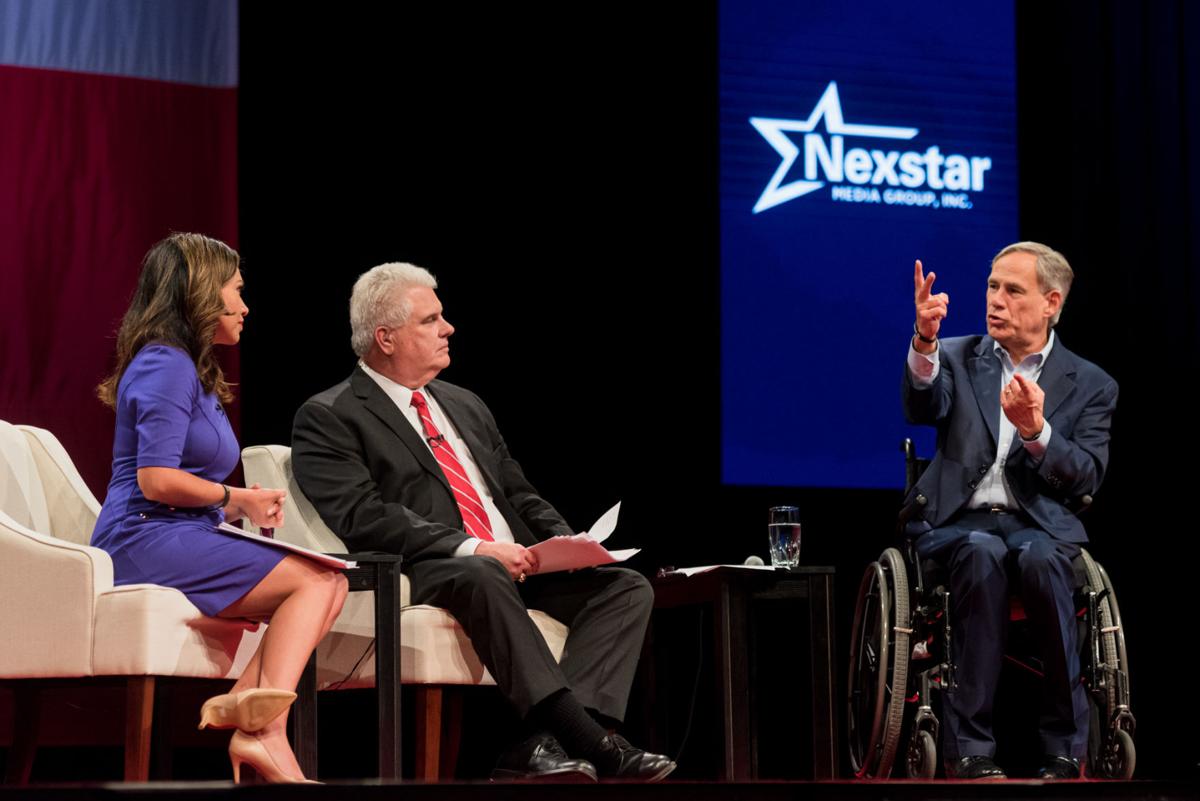 Gov. Greg Abbott answers questions Aug. 15 during a televised statewide town hall at the Cowan Center on the University of Texas at Tyler campus in Tyler.

Wood County Sheriff Thomas Castloo asks Gov. Greg Abbott why he’s using state funds to deploy the National Guard to protect the border when it is controlled by the federal government.

TYLER — Nearly two weeks after a mass shooting in El Paso, Gov. Greg Abbott promised Thursday that his office, and the Legislature, would take appropriate action to stop future tragedies — but quashed any speculation he’d call lawmakers back to Austin for a special session to make it happen.

Despite calls from a number of Texas Democrats to come back to Austin and address gun violence, Abbott told a live audience during a televised town hall at the University of Texas at Tyler that “it doesn’t require a special session for lawmakers to act.”

Still, he insisted that waiting until 2021 to formally meet didn’t mean he wouldn’t act — calling the man who killed 22 people at an El Paso Walmart an “enraged killer.” Police said the gunman told authorities he was targeting “Mexicans” when he surrendered.

“(The shooter) said in that manifesto that the reason why he made this attack is because of racism, because of hate, because of his desire to eliminate people from the face of the Earth,” Abbott said, referencing a hate-filled manifesto that decried a “Hispanic invasion of Texas.”

Rather than a special session, he outlined a dual-pronged strategy to address the shooting: creation of a task force to address domestic terrorism and a series of roundtable discussions similar to what he did after the May 2018 school shooting in Santa Fe. The task force is set to convene for the first time on Aug. 30.

The governor said the roundtables would include all members of the El Paso legislative delegation.

“Even though I’m in Tyler tonight, my heart is in El Paso,” Abbott said. “Our work to help you has just begun.”

He also reiterated to the enthusiastic Cowan Center crowd that he didn’t think “red flag” laws, which in most cases allow judges to temporarily seize an individual’s firearms if that person is considered an imminent threat, would’ve stopped the shooter in El Paso.

“The El Paso shooter had demonstrated no red flags at all that would’ve triggered any type of mechanism that would’ve prevented him from being able to get a gun in the first place,” Abbott said.

Despite discussion among some national Republicans, including President Donald Trump, on red flag laws and background checks, Abbott said Texas lawmakers will “work on getting guns out of the hands of deranged killers, while at the same time respecting the Second Amendment rights of law-abiding Texans.”

He took questions both from the audience in Tyler and via video from cities across the state. In addition to questions about domestic terrorism and gun violence, they addressed issues such as immigration, the future of the Republican Party and local property taxes.

“Illegal immigration is a federal issue,” said Wood County Sheriff Thomas Castloo. “Yet, the state of Texas is spending resources — we’re sending (Texas Department of Public Safety) troopers, we’re sending down the National Guard — but they lack the arrest authority to do anything.”

“If Congress would stop failing us, we could save this money,” Abbott said.

Daniel Clecker, an incoming UT Tyler freshman, pointed to the resignations of four Texas Republican members of Congress and asked if it was a sign Texas is turning Democratic blue.

“People can’t stay in office forever,” Abbott replied. “But let me answer the other key part — is there any big dynamic change going on in the state of Texas? Texas is a red state and is going to stay a red state.”

He also touted the work done during this year’s legislative session, including passage of a property tax reform bill and a massive school finance bill.

Another questioner asked about the Capitol drama surrounding embattled House Speaker Dennis Bonnen. The lower chamber’s leader has been mired in controversy since news that he had a closed-door meeting with conservative activist Michael Quinn Sullivan. In it, the speaker allegedly offered Sullivan’s organization media credentials in exchange for politically targeting a list of fellow GOP members in the 2020 primaries.

Abbott has remained mostly mum on the matter, but said Thursday he enjoyed working with Bonnen during the session and would leave the matter to the Texas Rangers — who were recently asked to investigate the allegations against Bonnen and one of his top lieutenants — before drawing any conclusions.

“What is happening now is the best thing that could happen — and that’s getting the Texas Rangers involved,” Abbott said.

Bill Brannon, a senior adviser for the Texas Democratic Party, offered his opinion.

“Texas is going to be the biggest battleground in 2020,” Brannon said. “Because one you’ve got demographic change, two you’ve got the antics of the president, three you’ve basically got failed governments on the part of the state.”