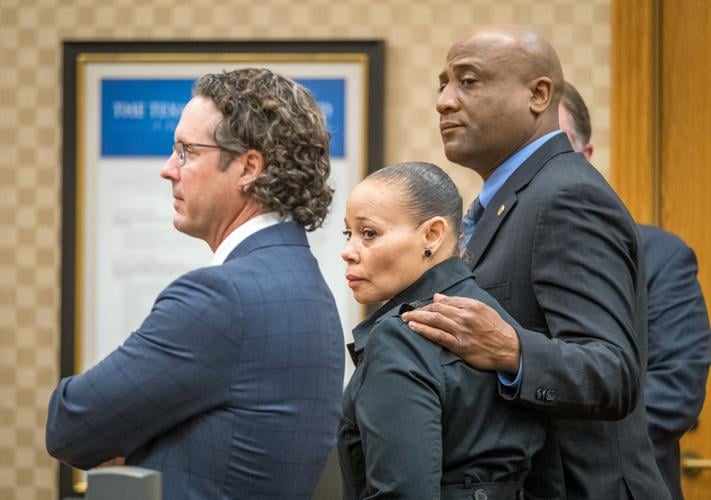 Gregg County Pct. 4 Commissioner Shannon Brown and his wife, Marlena Jackson, stand between their attorneys while pleading guilty to charges of voter fraud Thursday before Judge Alfonso Charles in the 124th District Court. 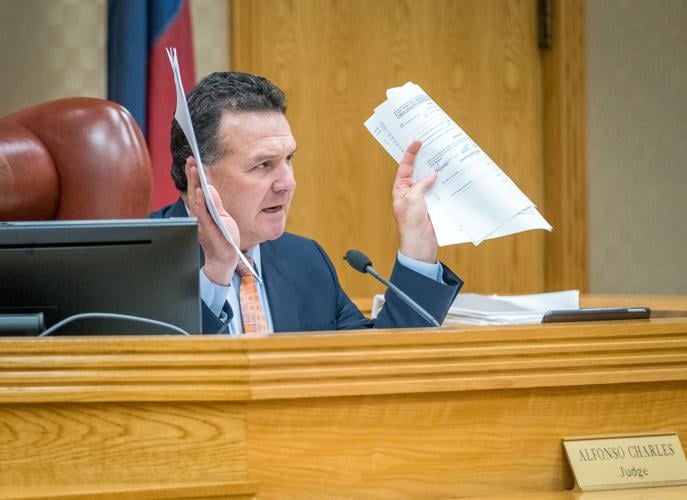 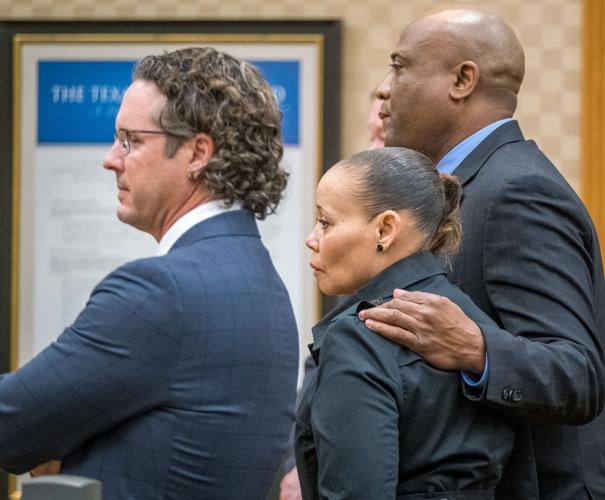 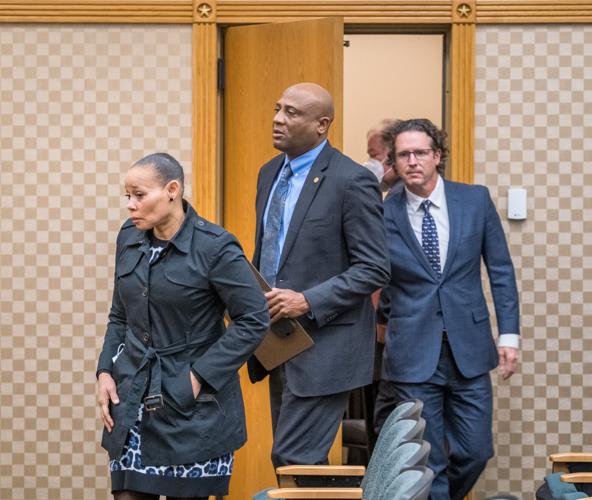 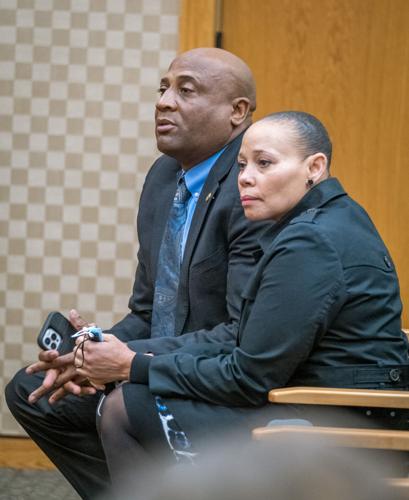 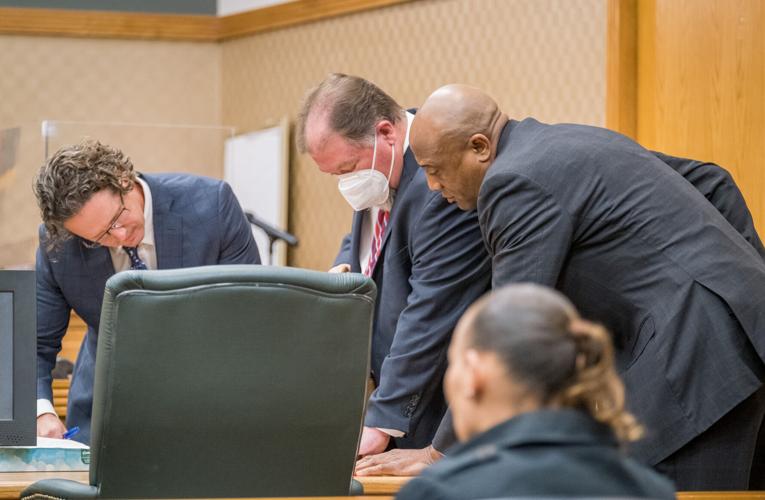 Gregg County Pct. 4 Commissioner Shannon Brown, right, visits with his attorney before pleading guilty, along with his wife Marlena Jackson, to voter fraud Thursday before Judge Alfonso Charles in the 124th District Court. 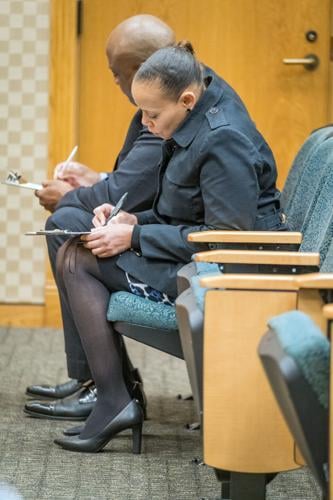 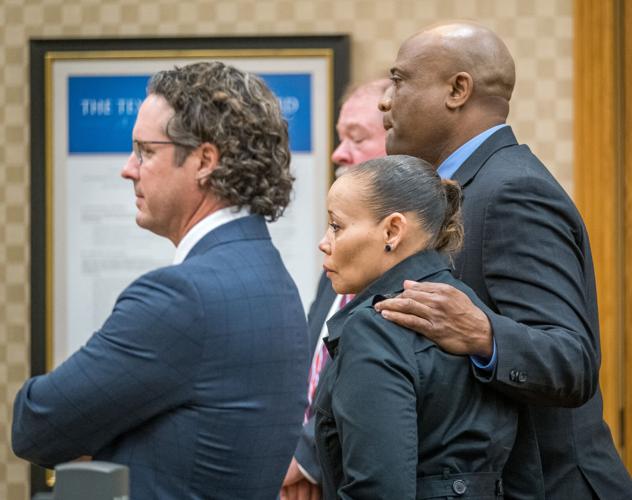 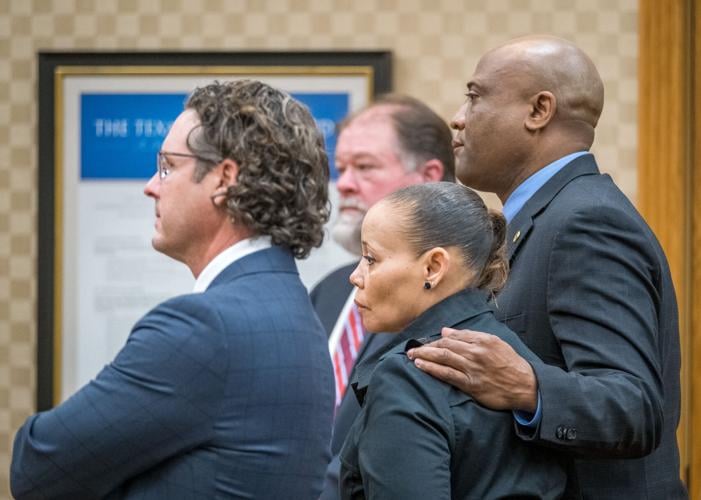 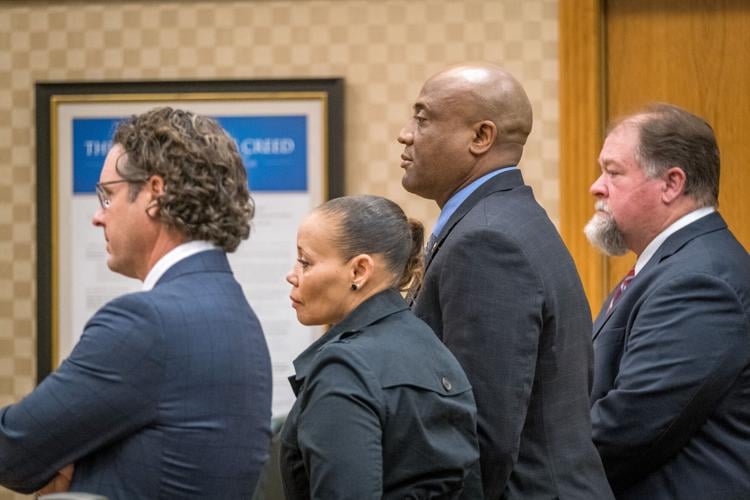 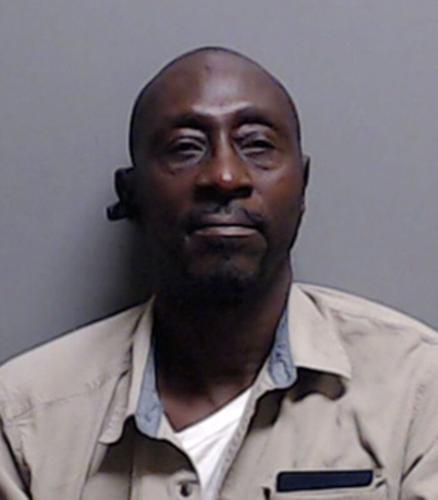 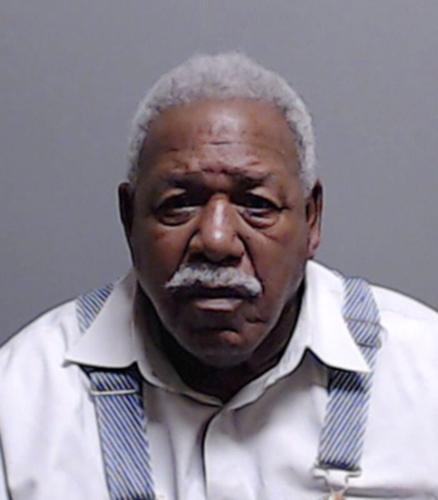 Gregg County Pct. 4 Commissioner Shannon Brown and his wife, Marlena Jackson, stand between their attorneys while pleading guilty to charges of voter fraud Thursday before Judge Alfonso Charles in the 124th District Court.

Gregg County Pct. 4 Commissioner Shannon Brown, right, visits with his attorney before pleading guilty, along with his wife Marlena Jackson, to voter fraud Thursday before Judge Alfonso Charles in the 124th District Court.

Brown 51, and his wife, Marlena Jackson, 52, had been charged with a combined more than 60 felonies related to an alleged vote harvesting scheme dating back to his March 2018 primary run again former Longview Councilwoman Kasha Williams.

Brown and Jackson held hands as they walked into the courtroom Thursday of 124th District Court Judge Alfonso Charles before pleading guilty to the same misdemeanor charge.

“Today, I have entered a plea to a misdemeanor for campaigning at a voter’s house and asking her to consider voting for me while she had possession of her mail-in ballot,” Brown said in a statement he issued after appearing in court. “I did not realize at the time that doing so was a misdemeanor. I should have better familiarized myself with all of the restrictions set forth in the election code. That was my responsibility. I accept that responsibility, and I apologize for my lack of understanding in that regard. I am sorry. Since becoming aware of the issue at the conclusion of the last election, I have taken thorough steps to ensure that myself, the volunteers and everyone in my campaign understands and adheres fully to the election code.”

The plea agreement does not require him to resign or prohibit him from seeking reelection. He faces three opponents in the March primary.

“I am proud of my service on the Commissioners Court,” Brown said. “I intend to finish what we have started, and I look forward to continue vigorously serving my constituents.”

Charles sentenced Brown and Jackson to one year of probation and a $2,000 fine each. Each also must write a letter apologizing to the residents of Gregg County and participate in community work service.

Charles told the couple he appreciates them taking responsibility for their actions and pointed to the country’s ongoing discussions about securing the election process.

“Your actions four years ago cast doubt on the validity of an election,” he said, adding that he wants them to understand the effect their actions had not in just in Gregg County but across the state.

State Sen. Bryan Hughes, R-Mineola, has referenced the case in authoring a voter restrictions bill that was signed into law by Gov. Greg Abbott.

“In Longview ... we have a county commissioner under indictment for mail ballot fraud,” Hughes said at a September event. “Anybody who tells you there’s no voter fraud in Texas is telling you a very big lie. It’s going on today. As you know, this bill deals with that.”

Brown and Jackson originally were charged along with Charlie Burns Jr., 85, of Longview, and DeWayne Ward, 60, of Longview.

The four were arrested in September 2020 after an investigation lasting more than two years. Charges included engaging in organized election fraud, illegal voting, fraudulent use of mail ballot application, unlawful possession of ballot/ballot envelope, election fraud and tampering with a governmental record with intent to harm or defraud. Jackson was charged with 41 felonies, Brown with 23 felonies, Burns with seven felonies and Ward with six, according to online records.

District Attorney Tom Watson said he expects charges against Burns and Ward also will be resolved soon in a similar fashion as Brown and Jackson.

“Both of the individuals, Mr. Brown and Mrs. Jackson, agreed to accept responsibility for their actions. Neither one of them had a criminal history prior to this,” Watson said. “So the ultimate outcome would have been probation regardless. But they agreed to stand up and take ownership of their actions. By them doing so, we agreed to dismiss the other charges., because they took responsible for election fraud. ...

“At the end of the day, I believe justice was served by them accepting responsibility,” he said, also pointing to the letters they’ll have to write. Watson indicated the apology letters they’re required to write would be printed in the News-Journal. “They are effectively telling all the citizens of Gregg County, ‘Yes. We did this and we accept responsibility for it.’ “

The rest of the indictments against the couple were dismissed.

In a statement released Thursday, Brown’s attorney, David Moore, said he believes the sentence is appropriate.

“I am glad that we have successfully closed this chapter for Commissioner Brown,” Moore said. “I believe that the resolution with the probated single misdemeanor count was appropriate given the facts of this case.”

His statement was accompanied by a sworn statement provided by the woman at the center of the charge, identified as Linda Carrier.

“I am the voter referred to on the charge that Commissioner Shannon Brown is pleading guilty to,” her statement says. “Commissioner Brown and his wife came to my house after I received my ballot in the mail. Commissioner Brown asked me to consider voting for him. He did not put any pressure on me to do so.”

The probe was announced in May 2018 after the March primary race for commissioner between Brown and Williams, the former councilwoman, drew 787 mail-in ballots. Those mail-in votes swung an Election Day lead by Williams into a five-vote victory for Brown. About one-third of the voters using those mail-in, or absentee, ballots made a disability claim to qualify for them.

After Brown won the March 2018 Democratic primary against Williams, questions were raised about the number of mail-in votes in the election. Brown’s win was confirmed in a recount.

The Texas Attorney General’s Office, which investigated the case, released a statement in September 2020 announcing the arrests of Brown, Jackson, Burns and Ward. According to the statement, the state filed 134 felony charges against the four defendants with potential penalties of six months in state jail to 99 years in prison.

According to the indictment, Jackson, Brown and Burns marked voter applications for ballot by mail as “disabled” when the voter was not. Under state law, mail-in ballots for disability are reserved for residents who are “physically ill” and are unable to vote in-person due to illness.

Jackson was accused of signing off several times that she assisted a voter complete an application when someone else assisted. The indictment lists three instances where Jackson signed, claiming to assist a voter when it was Brown who assisted though he was a candidate.

The indictment lists 30 election fraud counts alleging Jackson marked mail ballot applications as disabled for residents who were not eligible to vote by mail.

“It is an unfortunate reality that elections can be stolen outright by mail ballot fraud,” Texas Attorney General Ken Paxton said in the 2020 statement. “Election fraud, particularly an organized mail ballot fraud scheme orchestrated by political operatives, is an affront to democracy and results in voter disenfranchisement and corruption at the highest level.”

After the results of the 2018 race between Brown and Williams was decided, then-Gregg County Elections Administrator Kathryn Nealy, who retired at the end of 2020, said she questions practices that for years have led to disproportionate numbers of mail-in ballots in the South Longview voting precinct. 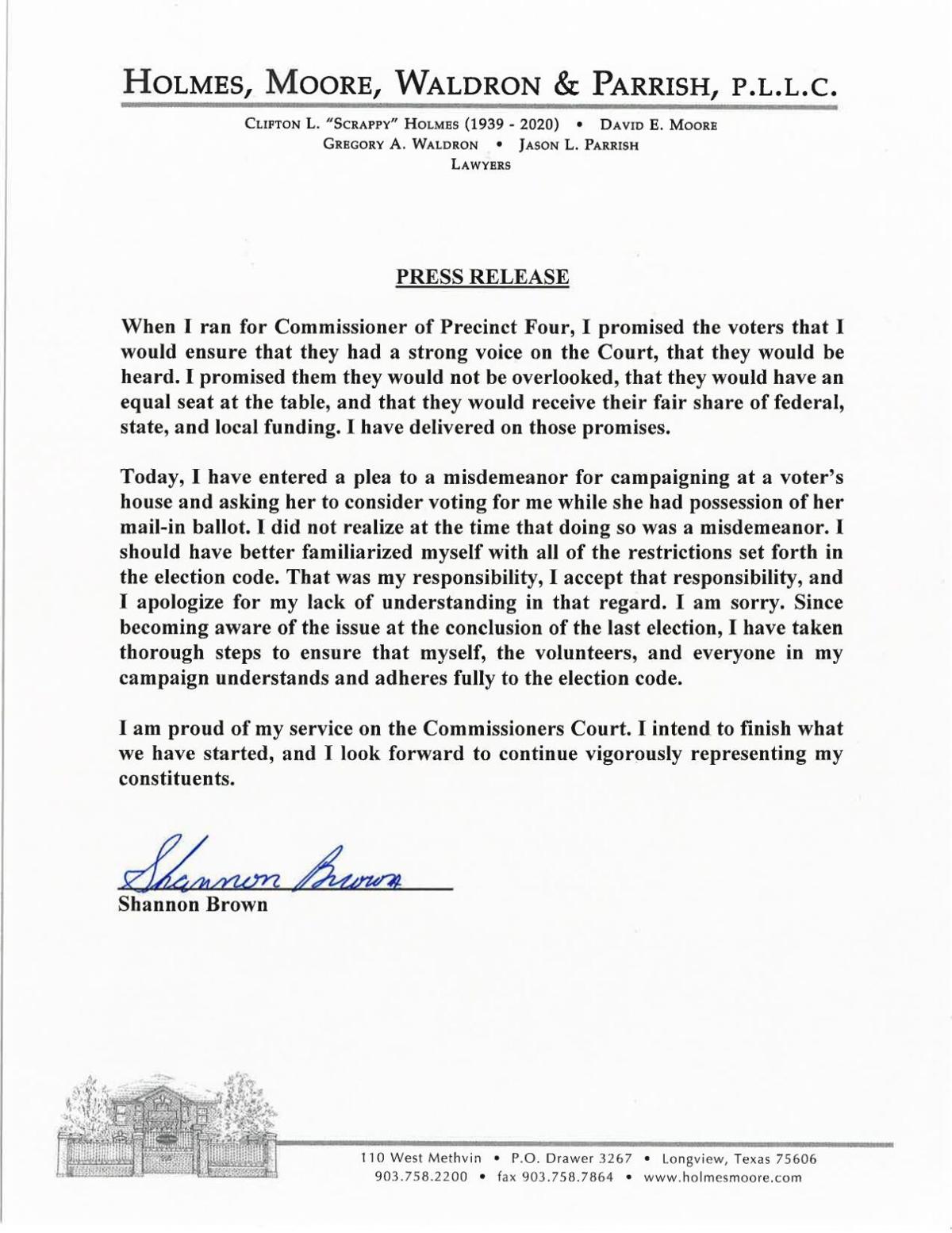