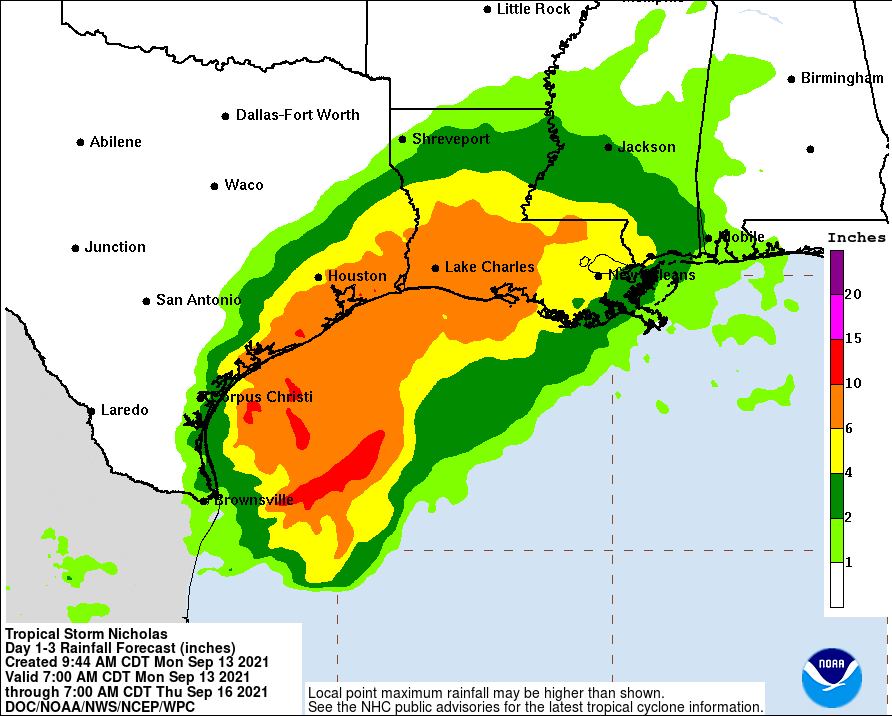 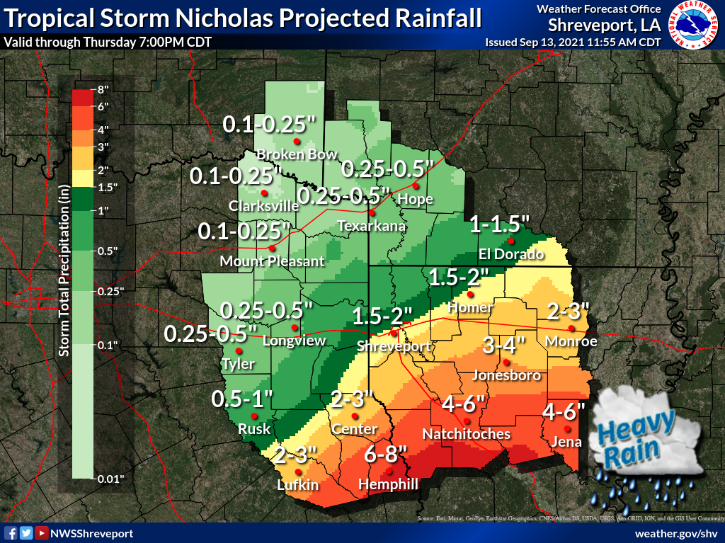 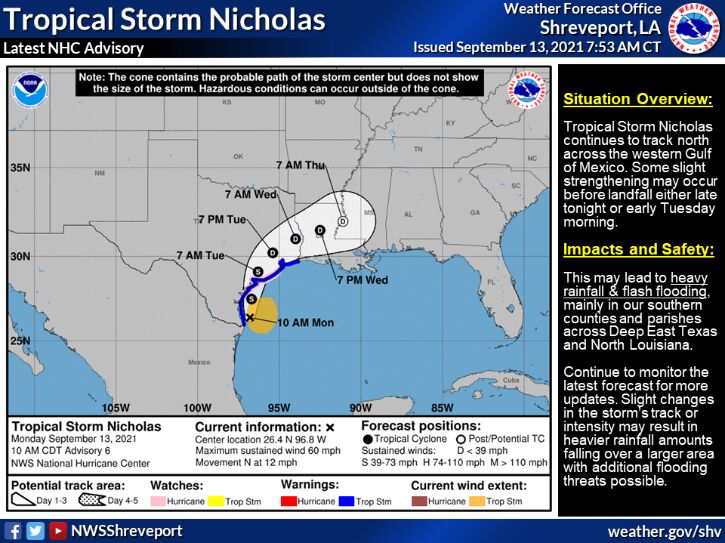 Tropical Storm Nicholas has strengthened off the Gulf Coast and could come ashore in Texas as a hurricane. Here are five things East Texans should know about the storm and its inland path.

1. When and where will it hit?

Tropical Storm Nicholas will make landfall along the South or Central Texas coastline Monday afternoon or evening. At 10 a.m. Monday, Nicholas was in the Gulf of Mexico moving north. The storm is expected to continue north and make landfall before turning toward the north-northeast on Tuesday.

2. Will it be a hurricane at landfall?

It could be. But it was categorized as a tropical storm early Monday afternoon.

“Strengthening is forecast today, and Nicholas could reach the northwest Gulf coast as a hurricane,” the National Hurricane Center said in a statement.

As of the 10 a.m. update from the National Hurricane Center, the maximum sustained winds were 60 miles per hour with higher gusts.

According to the Saffir-Simpson Hurricane Wind Scale used by the National Weather Service which ranks hurricanes from categories 1 to 5 based on sustained wind speed, a storm must sustain winds of at least 74 miles per hour to be considered a low Category 1 hurricane.

Nicholas is expected to produce total rainfall of 8 to 16 inches, with isolated maximum amounts of 20 inches, along the Texas coastal areas through the middle of the week. Areas along the coast, especially portions of the upper Texas Gulf Coast near Lake Jackson and Freeport, could experience life-threatening flash flooding and urban flooding. Storm surge along the coastal areas is expected.

Across the rest of southeast Texas into southwest Louisiana, rainfall of 5 to 10 inches is expected, according to the National Hurricane Center. Flash and urban flooding is possible across the entire storm affected area. There’s also a potential for isolated minor to moderate river flooding. High winds and tornados are also possible.

4. When will it get to East Texas?

5. What will it mean for East Texas?

Tropical Storm Nicholas: How will it affect East Texas?

Tropical Storm Nicholas, which popped up in the Gulf of Mexico over the weekend, is expected to make landfall on Texas' Coastal Bend sometime this afternoon or evening, according to the National Hurricane Center.

"Weakening is anticipated on Tuesday and Wednesday while Nicholas moves over land,” the National Hurricane Center said in a statement.

The threat for heavy rainfall and possible flash flooding is likely to be more of a concern across parts of lower East Texas in the middle mid to late in the week, according to the National Weather Service.

Rainfall totals through Friday are estimated to reach between one-half and 1 inch of rain in Longview and Tyler. Moving south to Rusk and Lufkin, the rain totals increase to as high as 3 inches.

“Depending on later storm track and intensity, this threat could also expand farther north to include more of our region up to the Interstate 20 corridor,” the National Weather Service Shreveport said in a statement.

Weak and short-lived tornadoes are possible during inland tropical storms.

The next report from the National Weather Service is expected at 4 p.m.

For more information, visit the weather.gov and nhc.noaa.gov.