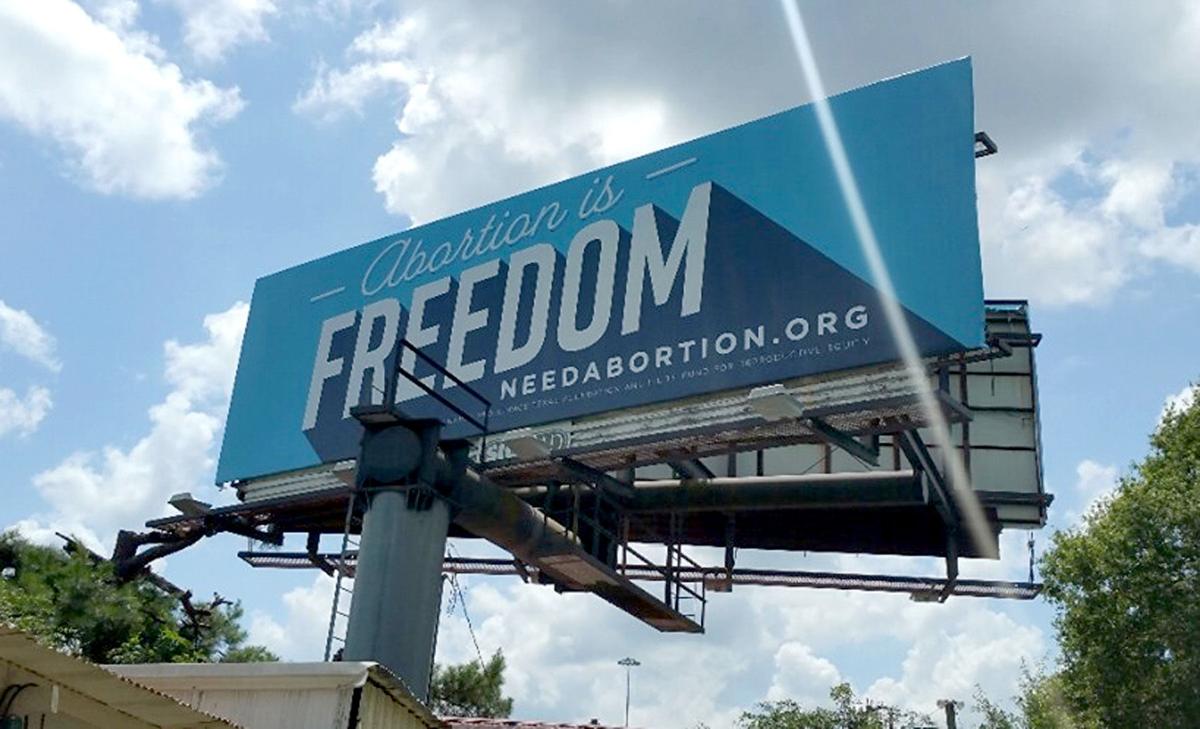 The Lilith Fund for Reproductive Equity says it erected two billboards that read “Abortion is Freedom” on Interstate 20 near Waskom in response to its City Council’s vote that it claims bans the procedure and makes the town a “sanctuary city for the unborn.” 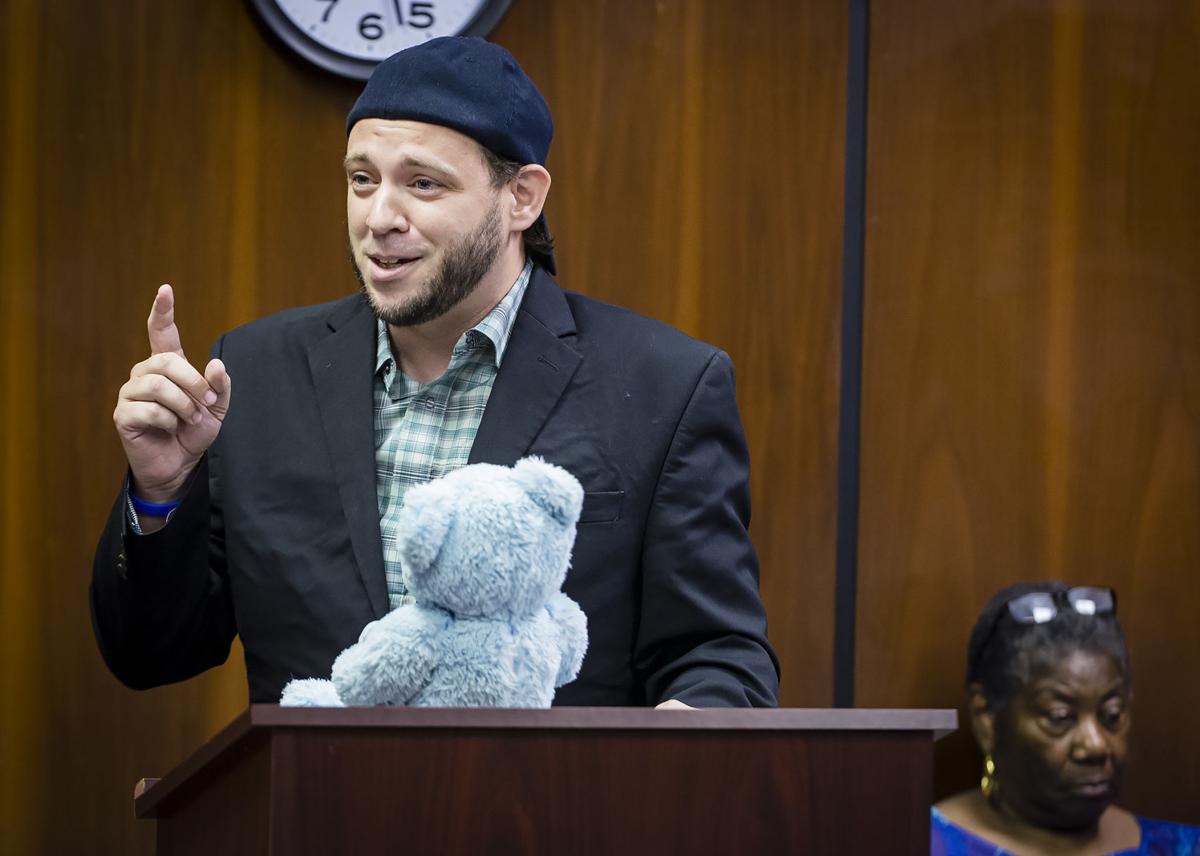 Rev. Mark Lee Dickson, of Right to Life of East Texas, speaks during the public comment portion of Tuesday’s July 23, 2019 Gilmer City Council Meeting where Dickson and others spoke in favor of an ordinance declaring the city a sanctuary city for the unborn, similar to the one recently adopted in Waskom. (Les Hassell/News-Journal Photo)

The Lilith Fund for Reproductive Equity says it erected two billboards that read “Abortion is Freedom” on Interstate 20 near Waskom in response to its City Council’s vote that it claims bans the procedure and makes the town a “sanctuary city for the unborn.”

Rev. Mark Lee Dickson, of Right to Life of East Texas, speaks during the public comment portion of Tuesday’s July 23, 2019 Gilmer City Council Meeting where Dickson and others spoke in favor of an ordinance declaring the city a sanctuary city for the unborn, similar to the one recently adopted in Waskom. (Les Hassell/News-Journal Photo)

WASKOM — Abortion billboards erected near Waskom in response to a “sanctuary city for the unborn” ordinance passed in June have galvanized the Harrison County town’s residents.

After the town’s council approved the ordinance, abortion rights activists from Austin put up two billboards on Interstate 20 that read “Abortion is freedom” and directed women needing care to a website with information on local services.

Heated disagreements have broken out on local Facebook groups since the billboards appeared, and a small number of women have reached out to the billboard sponsors to thank them for their visible protest.

The majority of Waskom residents interviewed by The Washington Post said they support the ordinance and resent more liberal parts of the state plastering their views on billboards in a largely conservative community.

“I think they did it to take a dig at Waskom,” said Jayna Lay, 37. “They send the wrong message in my opinion. ‘Abortion is freedom,’ that’s a messed up phrase. That’s pretty much saying, ‘Kill your children and you’re free.’ That’s crazy to me.”

Lay said she knew the council’s action would cause controversy. “The day before the meeting, Facebook exploded. But I would never see Waskom having an abortion clinic anyway; it’s such a small town full of churches.”

Corey Gossens, 31, was one of the few Waskom residents willing to speak out publicly against the ban.

“It baffles me how a group of all white middle-class men adopted an ordinance making abortion illegal within the city limits of Waskom,” he said. “It’s been my personal experience that some people of this caliber in these small towns are in support of a pro-life stance only when it doesn’t directly involve their lives and their perfect little white-picket-fence world.”

Gossens asserted that men who agreed with the ordinance “would likely drive hours away from home with their pregnant teen daughter in tow for an appointment with Planned Parenthood, if they thought the birth of this hypothetical child would compromise their position in society, or their seat on the church pew.”

He added: “I have seen this myself, and many who remain silent beside me will attest. This is why I feel the billboard is a beautifully and perfectly timed juxtaposition to the absolute insanity taking place in a town that is barely on the map.”

Women living in Waskom who oppose the ordinance and support the message of the billboards would only speak on the condition of anonymity. They said they feared being “shunned” by their churches and, in some cases, even their own husbands.

“A woman should be able to have the right to have an abortion,” said one woman, who spoke with unconcealed fury about the council’s move. “You can’t just take people’s rights away. There is a reason why you get an abortion — we don’t know what happens behind closed doors.

“There are young ladies around here I’ve spoken to whose family don’t believe that an uncle has been raping them. So they’ve been forced to get an abortion. Things get swept under the rug here.

“There are women here who agree with me and a lot who have had abortions but are too afraid to say anything,” she added. She offered no further details.

Waskom Mayor Jesse Moore insists the matter is closed. “We have no intentions whatsoever to go [head] to head with anybody who opposes it,” he said in an interview in his office. “As far as I am concerned, we are done with the abortion clinic issue.”

Texas has historically been at the forefront of the abortion rights battle. Roe v. Wade, the 1973 Supreme Court decision, originated here.

As the state-by-state battle over abortion rights has intensified this year, Republican lawmakers have increasingly pushed strict bans on the procedure as part of a strategy designed to give the Supreme Court the opportunity to overturn the landmark ruling. (Neither side indicated they expect the Waskom ordinance to advance that far.)

Moore insisted the move in Waskom was solely about stopping a clinic from ever opening in the city.

He said he “didn’t hear a word” of opposition from anyone who attended the packed meeting when the ordinance was passed.

“I want to make clear that we passed that ordinance to keep abortion clinics out of Waskom,” he said. “I don’t like what they [the billboards] say, but they have got that right.”

The abortion clinic closest to Waskom is Hope Medical Group for Women, just over 20 miles across the border in Shreveport. Moore said the council “got wind” that this clinic was planning on relocating, or putting a satellite office in Waskom.

The clinic’s administrator, Kathaleen Pittman, said there was never a plan to move.

“Hope Medical Group for Women never had any intention of moving there,” Pittman said. “Information provided to the city of Waskom was absolutely incorrect.”

Townspeople point to external groups as stirring up confusion and using the town as a front for both sides of the debate to promote their agendas.

The Rev. Mark Lee Dickson of Sovereign Love Church in Longview brought the ordinance to the Waskom council. Dickson, of White Oak, recently spoke to the Gilmer City Council about a similar ordinance, although that council has yet to take action.

Dickson has said he has a growing list of more than 160 cities where residents have asked him to pitch the “sanctuary cities” ordinance.

It is not hard to find residents who are willing to speak in support of their council’s new ordinance. Erin Grable, 47, rejected the idea that an abortion is acceptable in any circumstance.

As she served customers settling down for lunch at Jim’s Bar-B-Que, she described herself as a Christian.

“So of course I don’t believe in abortion,” she said. She said she believed there are a “million other options that nobody wants to talk about,” including adoption.

Asked whether she supported the right of a woman to seek an abortion in cases of rape or incest, she replied: “In my heart, no. I’m a full-on Christian, and I think there are always different things you can do. I pray for people who are lost, in my mind. People who believe in abortion ... need prayer.”

She also rejected criticisms levied at the male council members who passed the ordinance. “The thing they don’t want to tell you is that 90 percent of the people at that meeting were female,” she said.

“They want to say we are letting men make our decisions. I think that’s ridiculous. We are strong women in Texas; we know what we think and believe all by ourselves, and we will tell you.”

Suzan Maxwell, 58, added she, too, is “very proud” of what has happened in the town.

But some uncertainty has surfaced.

Speaking on the outskirts of the town, Damon Anderson, 60, a father to one daughter, said he struggles to justify the right to abortion when women have access to birth control. However, he said, in the instance of rape or incest, it was “different.”

He said: “If you got raped or beaten, I think you should have a choice as to whether you want to be a mother or not.

“I wouldn’t necessarily want an abortion clinic in this town,” he added. “I would hate to know that there are babies being killed across the street, but people have got to go somewhere.”