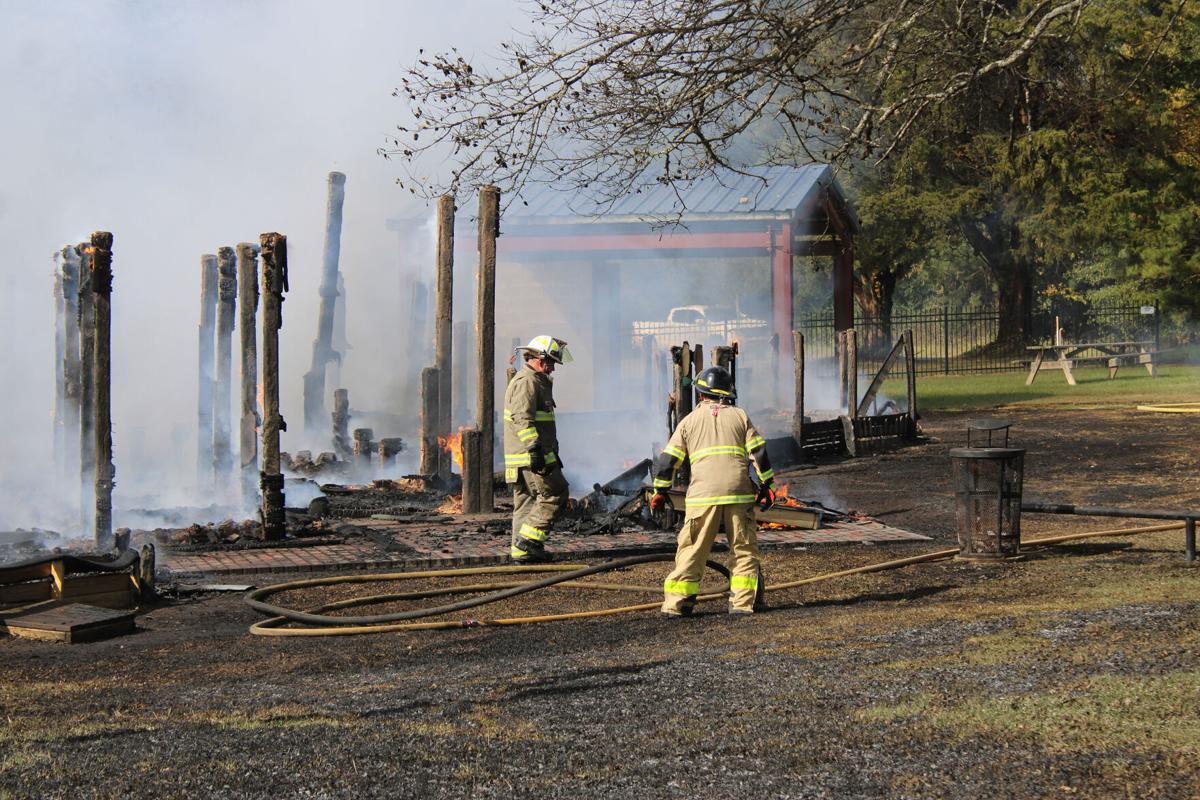 A community-built playground behind Beckville First United Methodist Church burned to the ground last November. Members of the Beckville Volunteer Fire Department worked to extinguish the flames shortly after lunch. 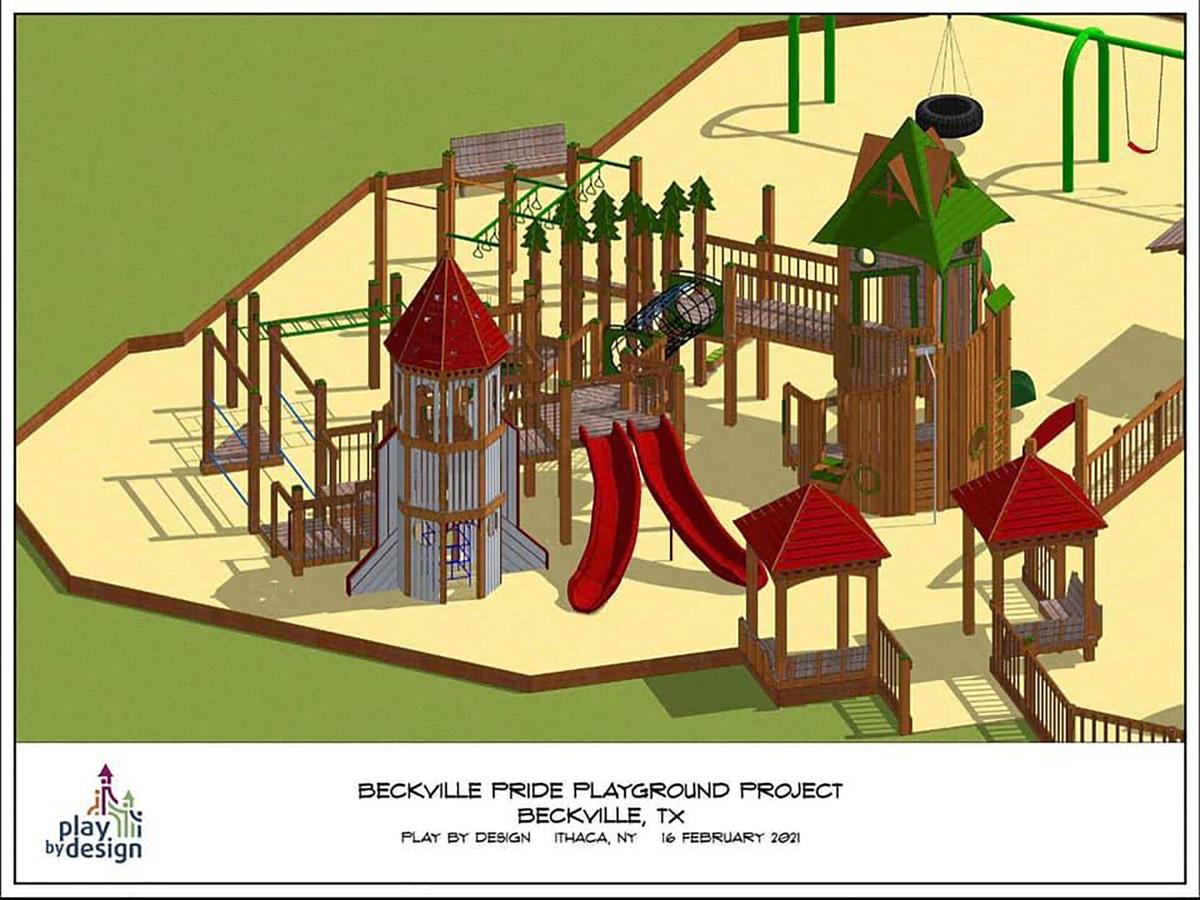 Play By Design out of Ithaca, New York has given renderings of the playground to be rebuilt in Beckville.

A community-built playground behind Beckville First United Methodist Church burned to the ground last November. Members of the Beckville Volunteer Fire Department worked to extinguish the flames shortly after lunch.

Play By Design out of Ithaca, New York has given renderings of the playground to be rebuilt in Beckville.

Tragedy struck last November when the community build playground in Beckville burned down, but community organizers are preparing to rebuild it.

“It’s a community built playground, so it’s not just hiring a company to come in and put together playground pieces, it’s actually the community coming together to raise the funds, and then in a six day period build the actual playground,” project coordinator Amy English said. “Cut the wood, do the labor, do all the work, and then it’s completed, and this one will be six days.”

The playground was built originally in 2011. They hired a playground consultant, and students from Beckville Elementary actually designed the playground, modeling it around the Magic Tree House books series.

They’re going to use the same process this time around as well as the same design, with a few changes to make it better. English said they are using a playground consultant out of Ithaca, New York called Play By Design.

“I never in my mind would have thought that I would be doing this again, because when you build it should be there for like a few generations anyway,” English said. “It was devastating when it burned, it really was because wasn’t just something you paid somebody to come put together for you. It was your blood, sweat and tears of your whole community, and plus the kids who had helped design it and the kids who have played on it since then. It’s just a really really cool experience that you can’t really describe to someone until they’ve been involved with it.”

“During the build, there’s obviously people working outside with tools; there’s also people just being helpers,” English said. “We have a meal team that will provide lunch and dinner throughout the build, so if someone didn’t want to get outside, there’s that way they can volunteer. We also offer childcare during the build, so that’s another way. People a lot of times say ‘well I don’t know how to use a power tool,’ but really, yes we do have to have some people out there that know how to use power tools, but just any volunteer age fourteen and over can be on site and help out.”

English said they’re planning a couple fundraisers to help pay for the playground. Beckville United Methodist Church, where the original playground was located and the new one will be located, was able to get insurance money that will help cover the costs, but that won’t cover the whole project.

“Obviously prices have increased tremendously in 10 years, and they’ve actually increased quite a bit just since the insurance claim back in November,” English said. “So even from November until now the price of structural plastic lumber, and just lumber in general.... the prices have gone up just with the whole pandemic, and stuff’s a lot harder to get right now too.”

Two local businesses are helping out with fundraisers — Ridgeway CNC is handling engraved pickets for the playground, and By Designs will sell a shirt with information on the build.

“Anyone that was involved with the last playground probably bought one (of the pickets) or knows about it, so the border of the playground has a picket fence, and those pickets are engraved,” English said. “Someone can buy a picket and then they can have their name engraved, their kid’s name, their business name, whatever you can fit on it with 20 spaces basically.”

Participating in the community build is an incredible experience, English said.

“It was awesome 10 years ago just to see people come together for a common good. And it wasn’t just Beckville people; it was a lot of our friends from all over Panola County, Tatum, a lot of our Carthage friends,” she said. “People from all over just came in and helped out, and once they got there they stayed and wanted to be there for the rest of the time, and that’s what’s really cool about it. Over the past year we haven’t been able to do a lot of stuff like that with COVID, so with things kind of less strict now, I think it’s just gonna be a project to kind of reunite people through this playground build.”

Potential volunteers can fill out a google form linked on the project’s Facebook page, Beckville Pride Playground Project. On that form people will be asked to give their contact information, areas of skill, when they can volunteer and whether or not they have tools they can loan for the build. Volunteers can also call English at (903) 918-3422.

The Facebook page also contains donations forms with sponsorships levels and the opportunity to adopt a component of the playground for a certain amount. For example, to sponsor an arch rock climb would be $500, and to sponsor the tree house would be $15,000. Any level of donation is appreciated. If you would like to donate through PayPal, their account is beckvillepride@gmail.com. Donors are asked to select to send it through friends and family so that they can keep the entire donation.