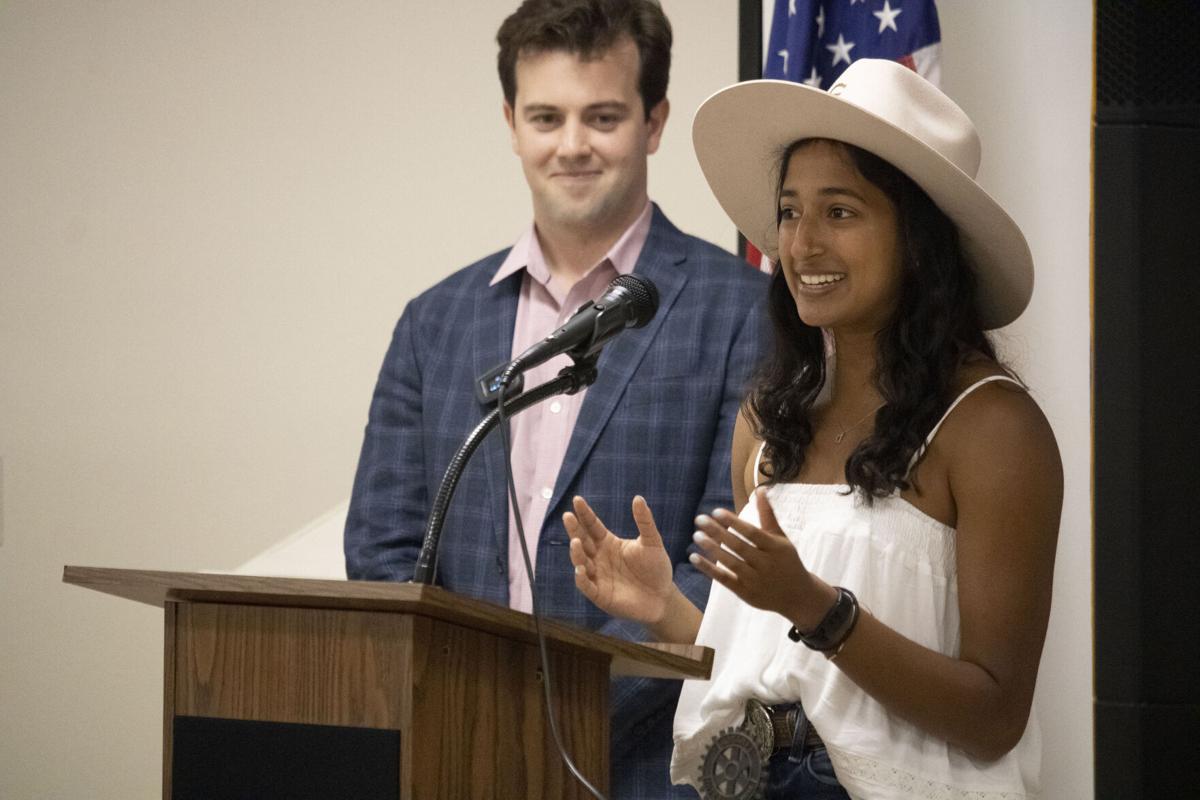 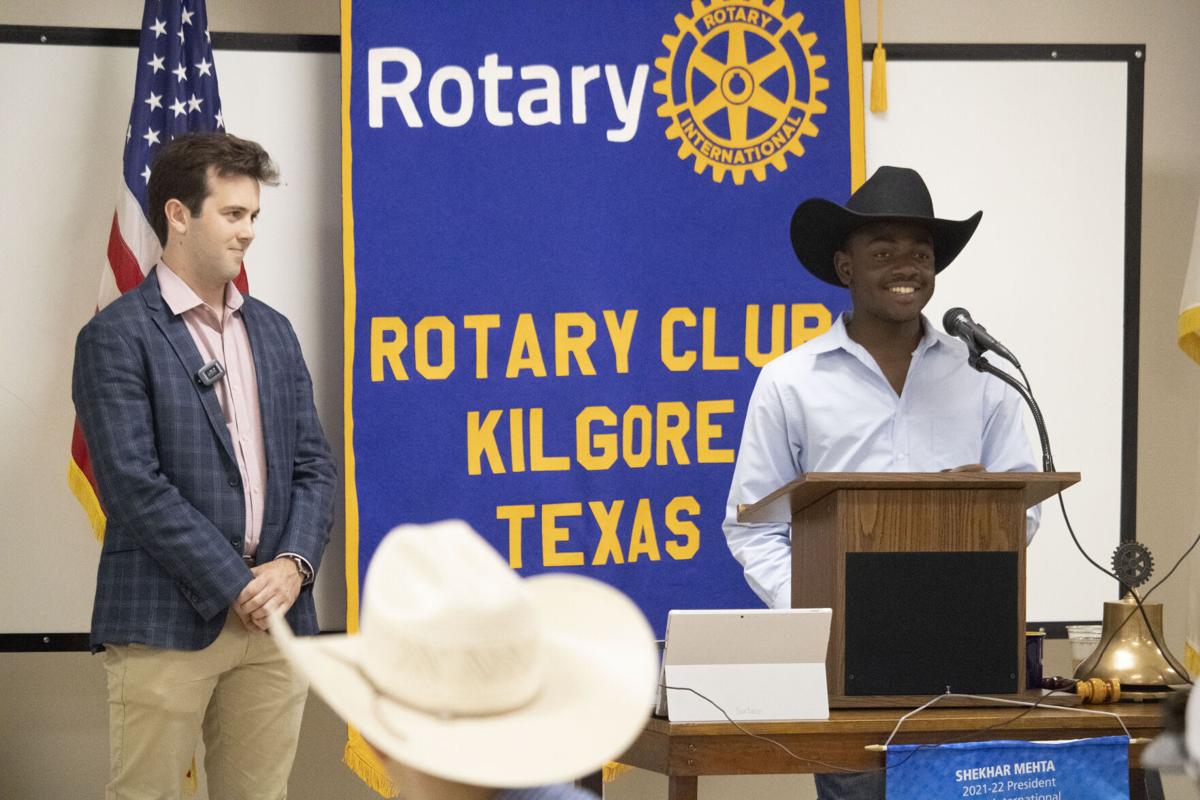 Matthew Murray, who recently graduated from Stamford High School in Stamford, Conn., said many of the things he assumed about life in Kilgore and the people who live there were upended in the course of the trip through the American Exchange Project. 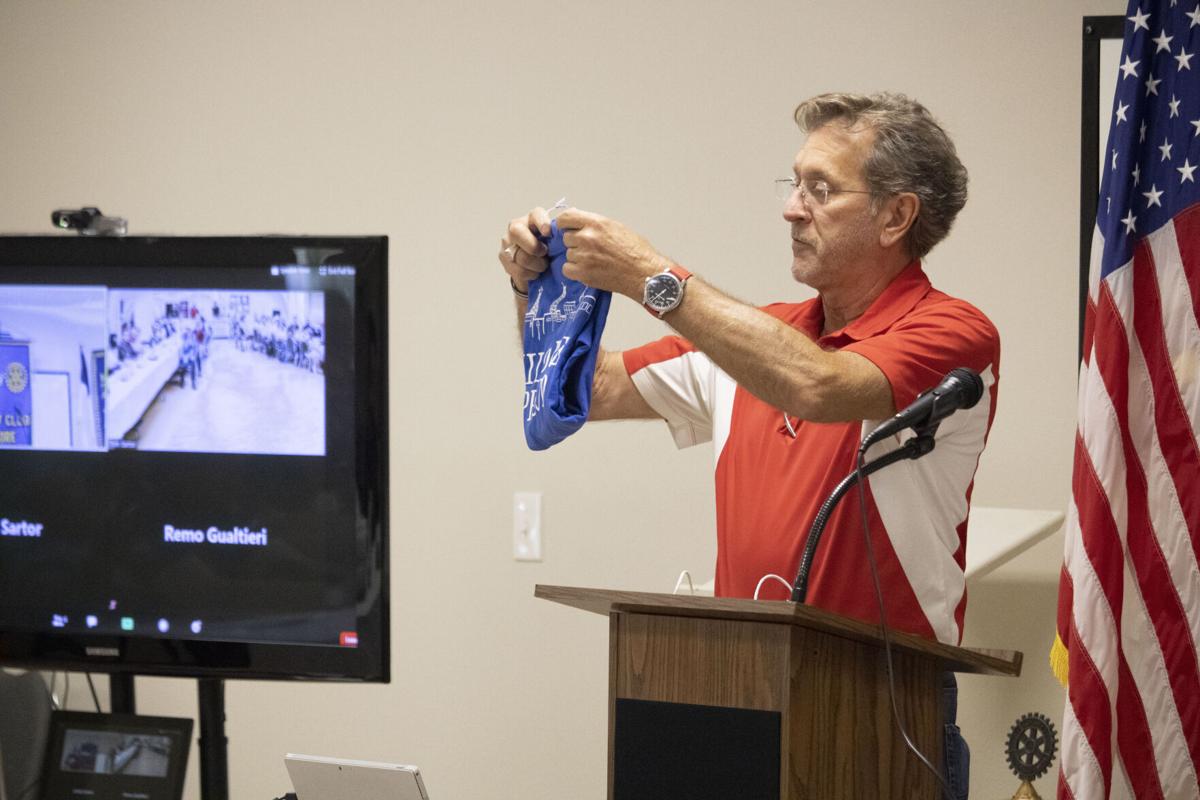 Kilgore Mayor Ronnie Spradlin shows a “Kilgore Proud” T-shirt to students who visited the city recently as part of a domestic exchange program.

Matthew Murray, who recently graduated from Stamford High School in Stamford, Conn., said many of the things he assumed about life in Kilgore and the people who live there were upended in the course of the trip through the American Exchange Project.

Kilgore Mayor Ronnie Spradlin shows a “Kilgore Proud” T-shirt to students who visited the city recently as part of a domestic exchange program.

KILGORE — The Kilgore Rotary Club hosted a group of recent high school graduates this past week through a domestic exchange program, welcoming them to the city and learning about the eye-opening experiences they have had while visiting East Texas.

“Last year, I came to Rotary and talked about having a domestic exchange program for high school students to help bridge so many of the divisions in our country we have right now. Here sits the first cohort of those high school students,” he said, gesturing at the young people, several wearing new cowboy hats.

“We, at AEP, have two objectives. The first is to preserve our democracy, especially at a time of great division,” he said. “The second is to help develop our nation’s young people, to help them realize the country that they’re connected to, to learn more about the United States, not just from classroom lessons but from the places and people in it.”

Many of the young people visiting East Texas as part of the American Exchange Project came from parts of the U.S. different from Kilgore in terms of attitudes about religion, guns, politics and much more.

Matthew Murray, who recently graduated from Stamford High School in Stamford, Connecticut, said many of the things he assumed about life in Kilgore and the folks who live here were upended in the course of the trip.

“Coming to East Texas and specifically Kilgore, I had a lot of assumptions about how people would be, what I would see there, etc.,” Murray said. “Meeting the people here and talking to them has been really taking those expectations and throwing them in the trash bin. The people here are so nice and so kind, so loving. They allowed us into their homes, onto their property, just so we can see how they live their lives. Things aren’t so cut and dried. For example, I know that the gun culture here is much bigger than it might be in Connecticut. We talked yesterday about how people in Texas see it differently. What I might have assumed would be a weapon of destruction, to others it might represent family or going on a hunting trip.”

Divya Ganesan, who recently graduated from Castilleja High School in Palo Alto, California, said she was thrilled to visit Kilgore and Kilgore Rotary Club. Her father, she said, earned a scholarship from Rotary International at the age of 17, allowing him to come from India to California, where he finished his final year of high school.

“I am so, so grateful for the generosity and the way that Kilgore has included us in your community. It showed us what you’re about,” she said. Along with her fellow exchange students, Ganesan visited Cavender’s in Longview to try on cowboy boots and hats, fired a gun for the first time and learned about the ways Kilgoreites live, learn and worship.

Veronika Lin, a recent graduate of Milton Academy in Milton, Massachusetts, said she learned people from opposite sides of the country have more in common than they may realize, despite their differences.

“I’ve learned about similarities we have in terms of values,” she said. “Where I come from, religion is not a center of community, but I see the same values of community and finding purpose and morality here. I’m very grateful for the attitudes we found here, that we had very open conversations.”

Students pay no fees to participate in the program. To learn more about AEP and how students can participate, visit www.americanexchangeproject.org.