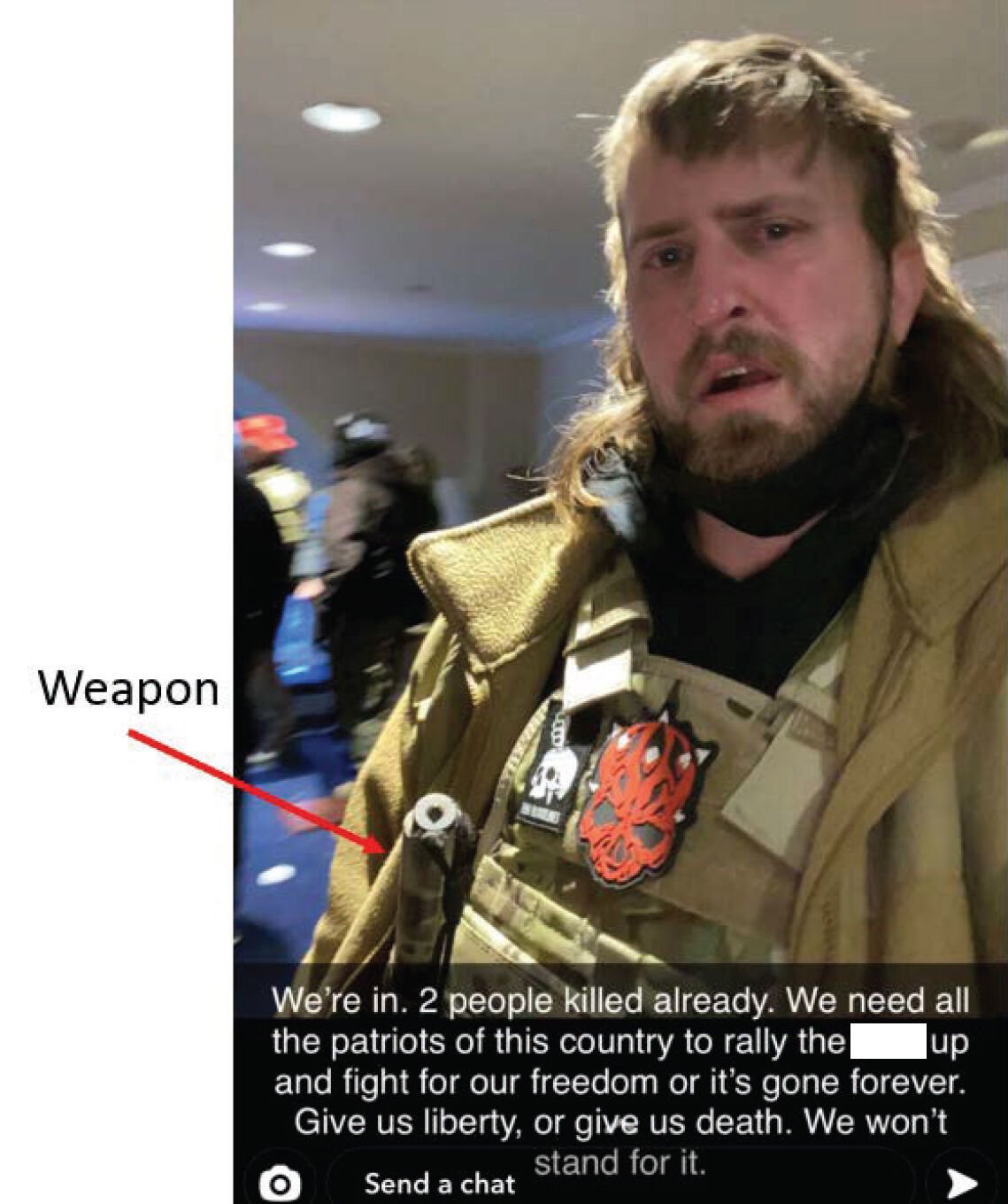 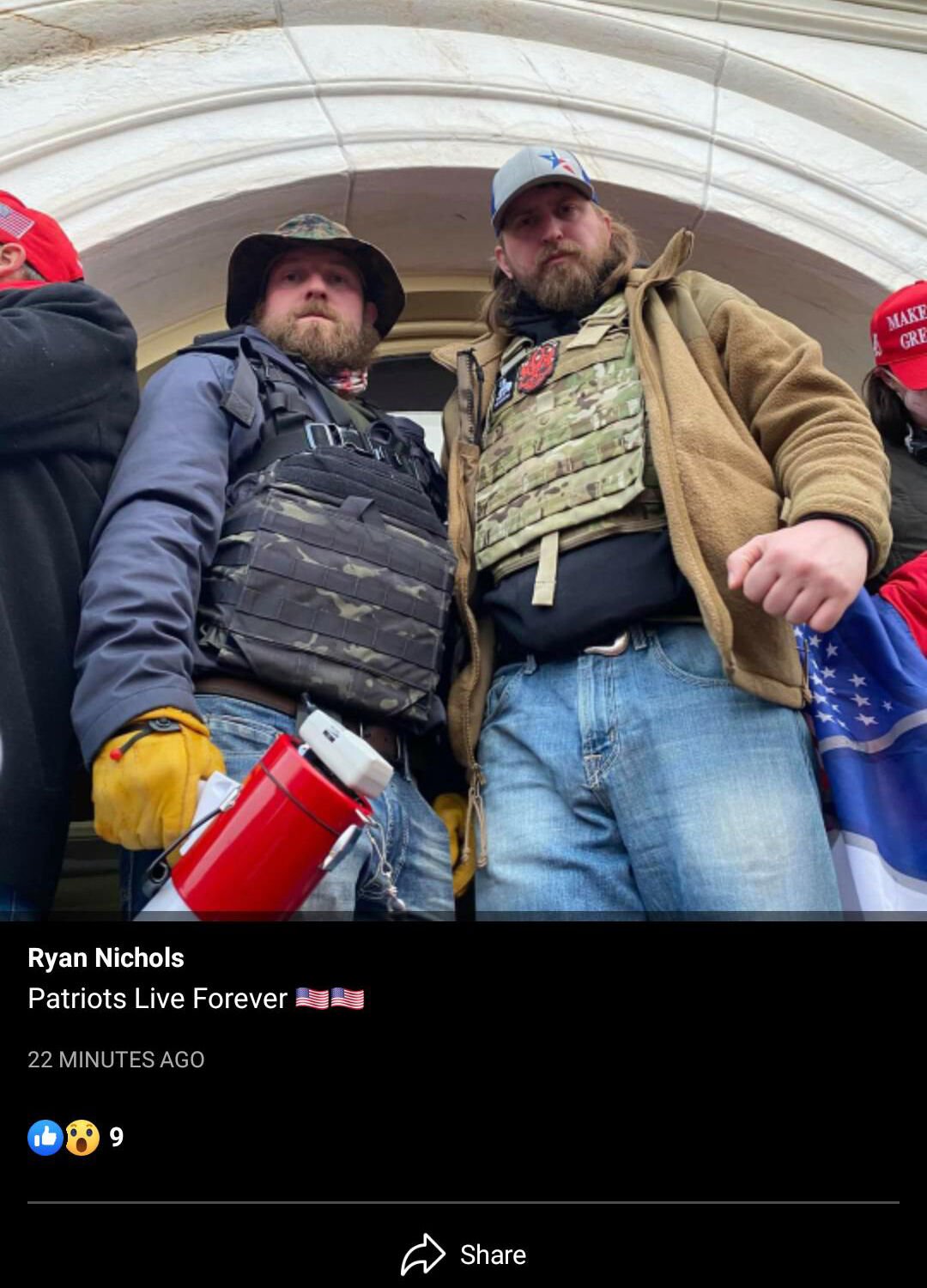 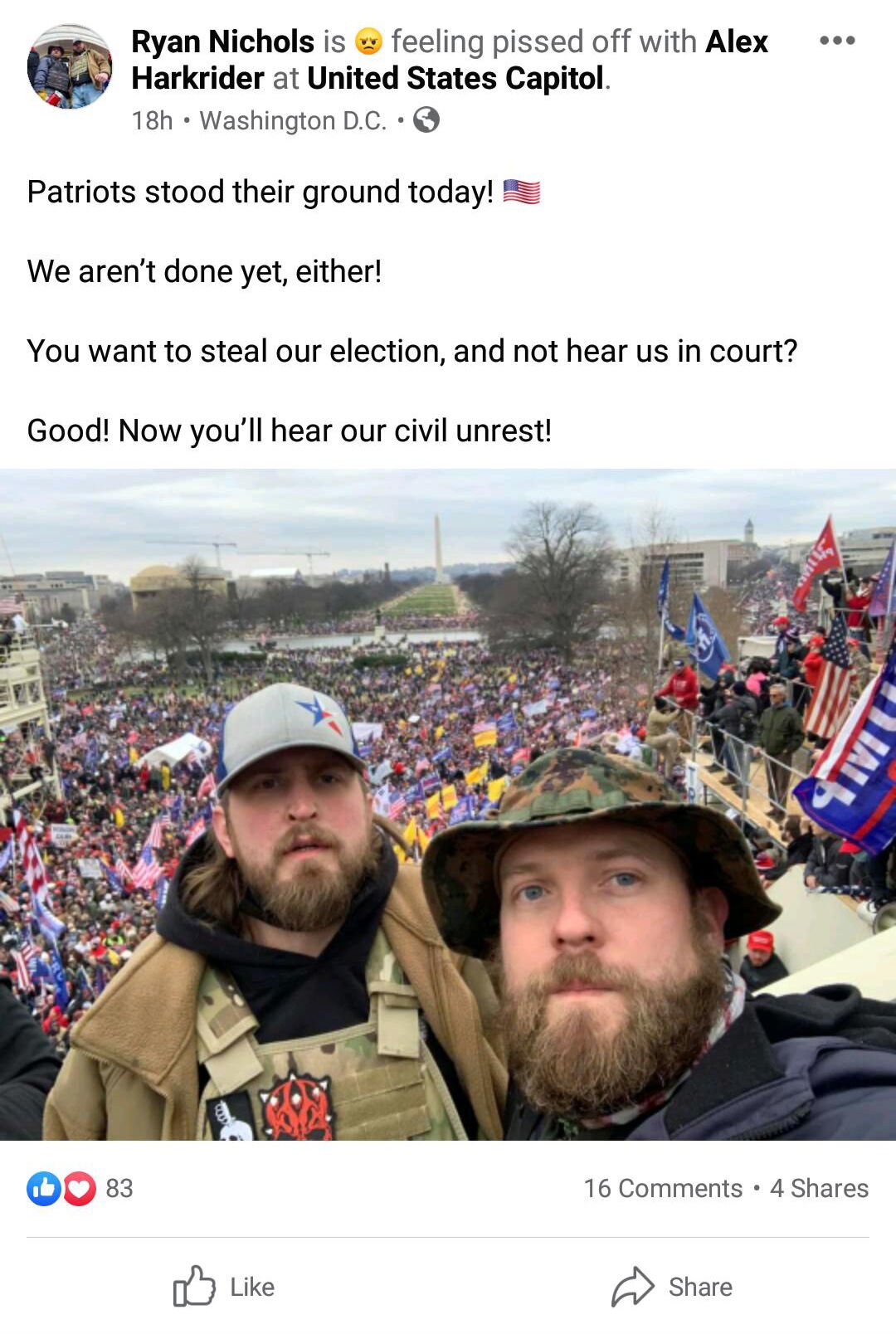 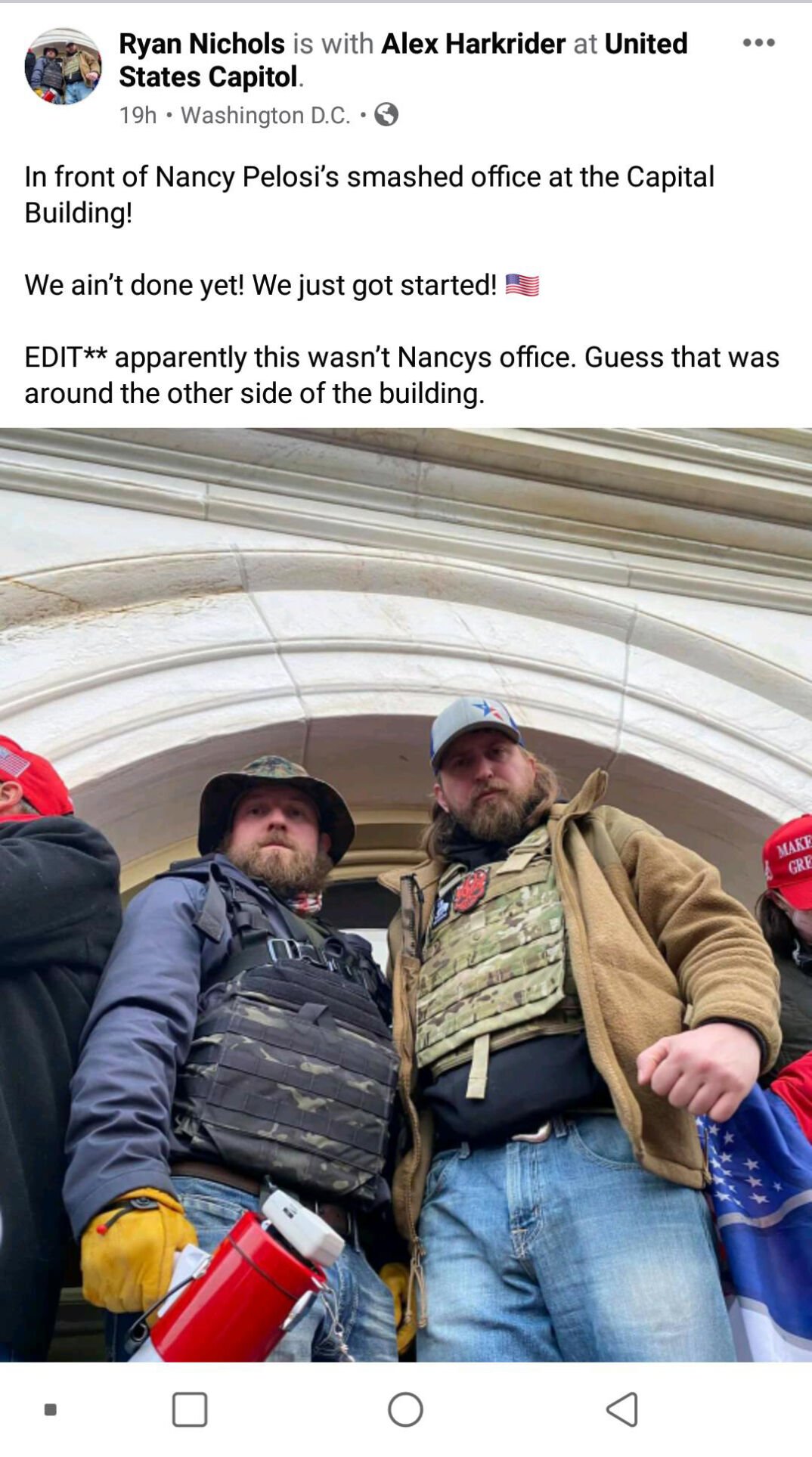 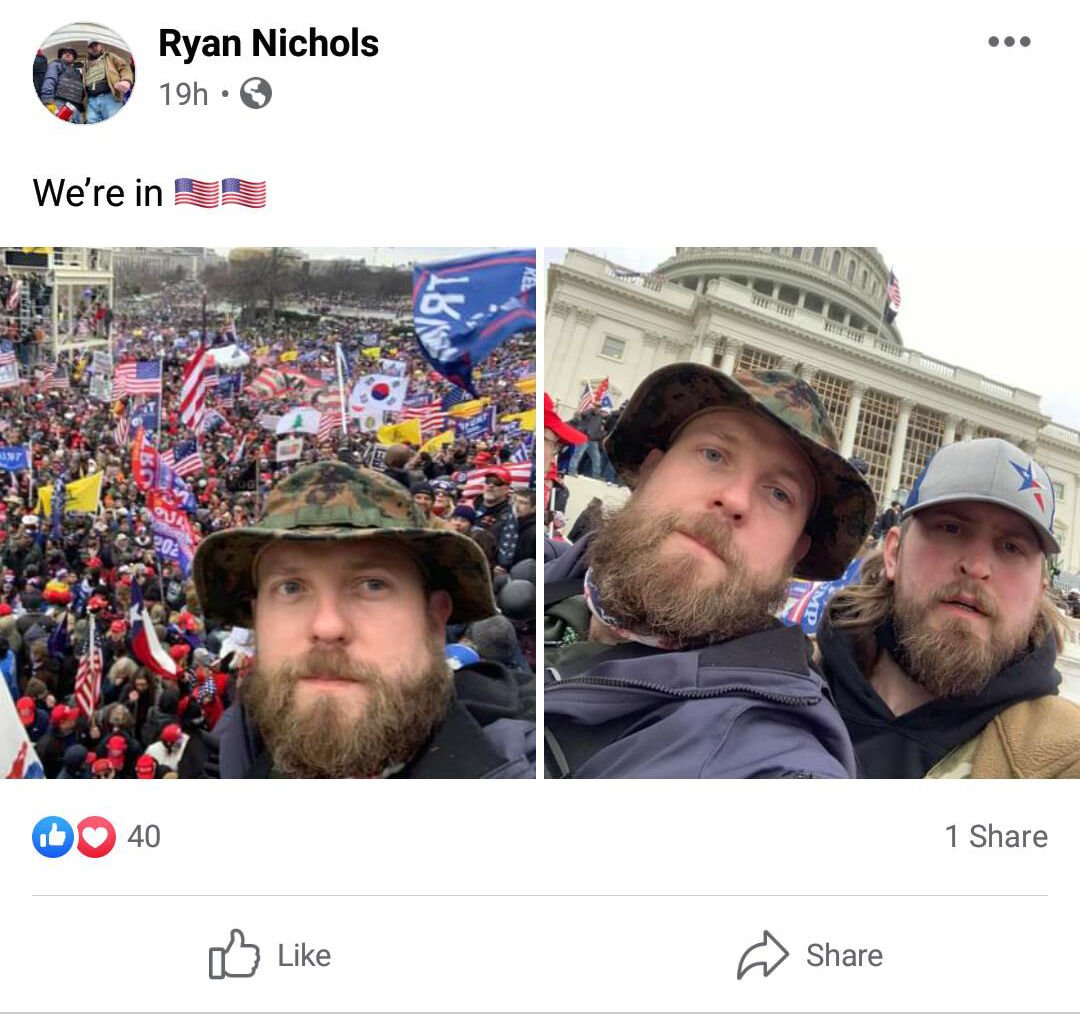 Ryan Nichols and Alex Harkrider are seen Jan. 6 outside the Capitol in Washington, D.C. The two men have been arrested in connection with the Capitol riot. 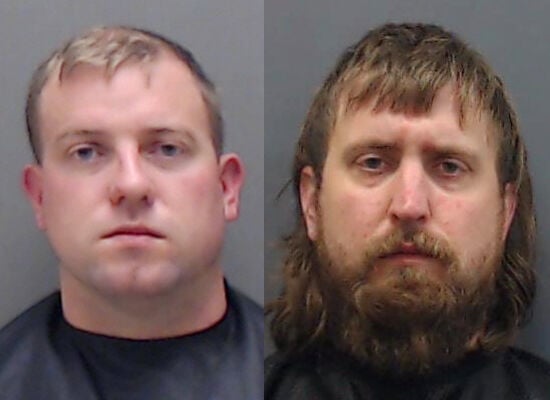 Ryan Nichols and Alex Harkrider are seen Jan. 6 outside the Capitol in Washington, D.C. The two men have been arrested in connection with the Capitol riot.

An East Texas man held on federal charges related to participating in the Jan. 6 U.S. Capitol riot has asked for pretrial release and claims he “did not act out of criminal intent but out of sense of duty,” according to court documents.

Alex Kirk Harkrider, 34, of Carthage, is in federal custody awaiting trial and is one of two East Texans indicted on charges related to the riots.

A request to revoke the detention order and modify the bond conditions was filed Thursday by Harkrider’s attorney Kira Anne West out of Washington, D.C.

West said Harkrider would be willing to submit to GPS monitoring by pretrial services in Tyler or house arrest.

Harkrider was indicted on charges of civil disorder, obstruction of an official proceeding, theft of government property, entering and remaining in a restricted building or grounds with a deadly or dangerous weapon, disorderly and disruptive conduct in a restricted building with a deadly or dangerous weapon, unlawful possession of a dangerous weapon on capitol grounds or buildings, disorderly conduct in a capitol building, and parading, demonstrating or picketing in a capitol building in the District Court for the District of Columbia.

Both men are accused of interfering with law enforcement performing official duties, attempting to impede or obstruct an official proceeding before Congress through civil disorder, and both men are accused of unlawfully entering the Capitol building with deadly or dangerous weapons. According to court documents, Harkrider was armed with a tomahawk ax and Nichols with a crowbar and pepper spray.

According to the request, Harkrider and Nichols attended the “Save America” rally on Jan. 6 where then-President Donald Trump encouraged those in attendance to march down and to the U.S. Capitol and protest the certification of the Electoral College results for the 2020 presidential election.

“There were also reports in the weeks leading up to this event that Antifa and BLM protesters would be present,” West claimed in court documents. “Therefore, Mr. Harkrider had a tomahawk for self-defense and no other reason.”

The conspiracy theory claiming members of antifa stormed the Capitol was deemed false. West described Harkrider as wearing “what in Texas would be considered street clothes, with the addition of a protective vest.”

Harkrider claims he was responding to the president’s call to action, documents show.

“Like thousands of others, Mr. Harkrider was responding to the entreaties of the then Commander-in-Chief, former President Donald Trump,” court documents said. “The President maintained that the election had been ‘stolen’ and it was the duty of loyal citizens to ‘stop the steal.’ Defendant did not act out of criminal intent but out of sense of duty.”

The attorney said people may not find Harkrider’s political beliefs to be rational.

“In the heat of the moment, after you’ve ‘heard the call’ from your President, you may forgo reason and listen to those around you,” court documents said.

The attorney also claimed that Harkrider was, quite literally, pushed into the situation.

“People were pushing him forward and he could not navigate,” West said, referring to the moments after a window was broken. “People started crawling through the broken window. People continued going in and out of the window. At one point, Mr. Harkrider stepped into the window to flee the tear gas. It was hard to breathe. No one told Mr. Harkrider to leave, but after a few minutes, Mr. Harkrider and Mr. Nichols decided to leave the Capitol. They walked to the uber pick up zone and went back to their hotel. There was a great deal of confusion that day.”

At about 6 a.m. Jan. 18, Harkrider was arrested at his home in Carthage.

“He was awakened by a crash, banging on the door (police kicked it in), and two flash bangs were set off,” court document said. “He was in a daze and instantly had flashbacks of his time as a Marine where he saw daily combat which included shooting and killing. With tears in his eyes, he begged the officers not to shoot his dog, Opie.”

With a search warrant, law enforcement took items from Harkrider’s home, including a table leg. Harkrider is also accused of stealing a table leg from the Capitol.

“They also questioned Mr. Harkrider first without giving him his Miranda warning,” West claimed in court documents. “He was ‘in custody.’ Mr. Harkrider cooperated with the officers.”

On Jan. 22, a federal judge ruled Hardrider and Nichols would be held without bond, awaiting trial due to “clear and convincing evidence that there are no conditions that would reasonably assure the safety of the community and has shown by a preponderance of the evidence that there is a serious risk that the defendant will flee or not appear in court when required.”

In a detention order for Harkrider, Judge K. Nicole Mitchell said she was concerned about text messages discussing bringing firearms to the Capitol as well as evidence that he did bring a weapon to the Capitol.

“The defendant’s mental health history and past abuse of alcohol also support detention,” Mitchell said of Harkrider in the order.

Harkrider and Nichols had posted images and videos of themselves involved in the riots at the Capitol to their social media accounts.

Investigators found photos, screenshots and videos from Harkrider and Nichols depicting them taking part in the riot, according to court documents. One photo, the affidavit said, showed the men in the Capitol with the caption “We’re in.”

These photos were included as exhibits in the arrest affidavit along with video analysis.

One video shows Harkrider leaning out from the Capitol through a broken window.

Harkrider is also accused of sharing a Snapchat from inside the building that said “We’re in. 2 people killed already. ... Give us liberty, or give us death. We won’t stand for it.”

West claimed that “the snapchat could be easily doctored.”

“The evidence submitted by the government is full of misrepresentations and assumptions,” West said. “There is no evidence that Mr. Harkrider was part of a violent mob. Rather, he found himself surrounded by thousands of people protesting and at that time, he still believed he was engaged in a peaceful protest.”

West further claims that Harkrider’s detention is making it difficult to prepare a defense for him.

“His ability to prepare a defense will be hampered by his pretrial incarceration and currently it is nearly impossible to speak to Mr. Harkrider more than once a week because the jail staff are overwhelmed with requests for video calls,” West said in the motion. “Reviewing the evidence alongside a client during the COVID-19 pandemic is a near impossibility because undersigned counsel cannot travel to the jail and because of the protective order in place.”

Several letters from family and friends were filed with the motion in support of Harkrider’s character.

The motion to revoke the detention order for Harkrider was also filed in Nichols’ case but with Harkrider’s filing. It is unclear if Nichols is also requesting release. Attorneys for Nichols could not be reached Monday.

Two East Texas men placed at the Capitol in Washington, D.C., during the Jan. 6 riot by one …

Newly released text messages between two East Texas men charged in the Jan. 6 riots at the U.S. Capitol show the pair were preparing for a “wa…