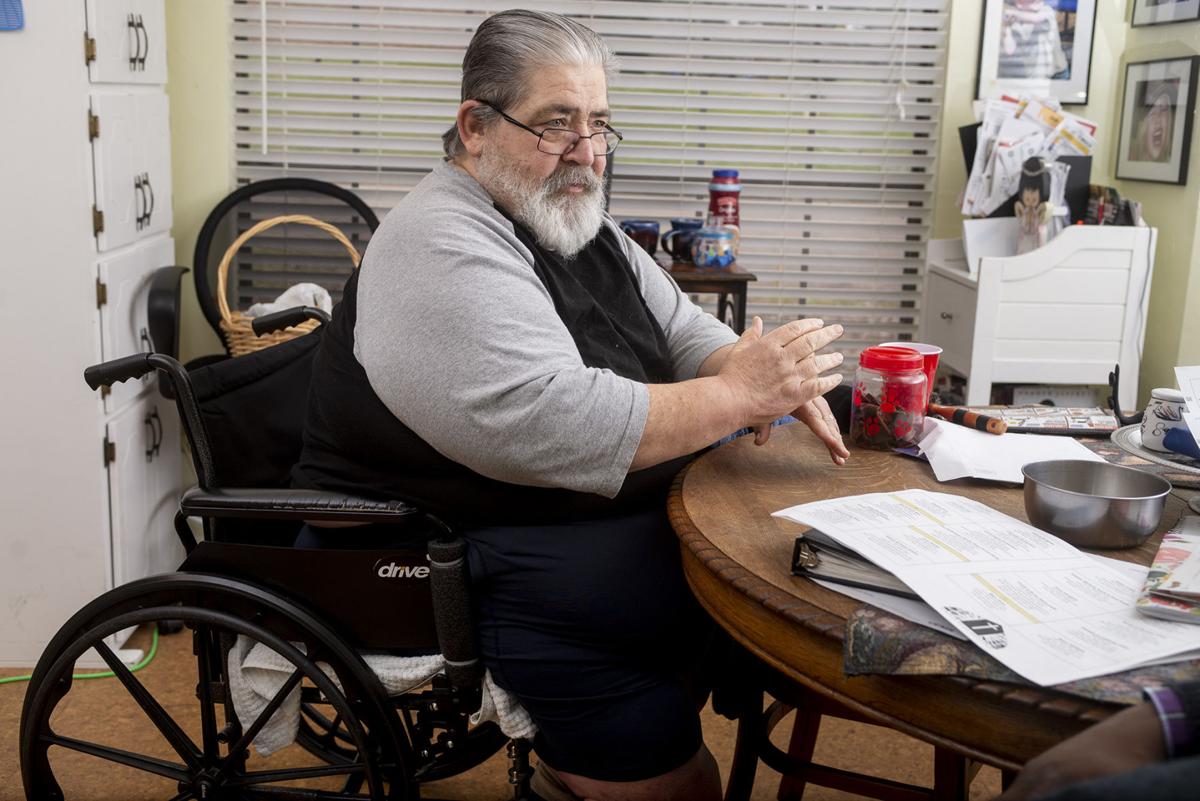 Pete Litterski speaks Friday in his Longview home about navigating the city in a wheelchair. Litterski and his wife witnessed a man in a wheelchair get struck by a vehicle Jan. 17 on North Fourth Street. The man later died at a hospital. 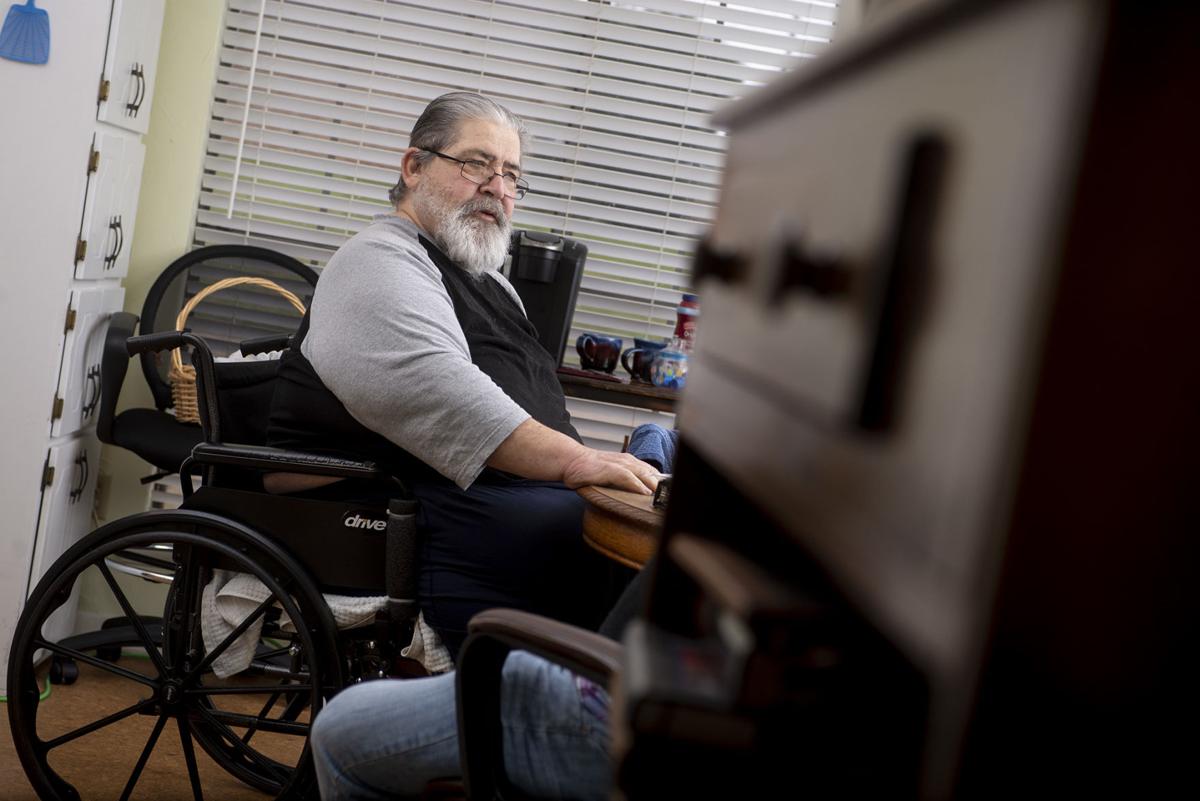 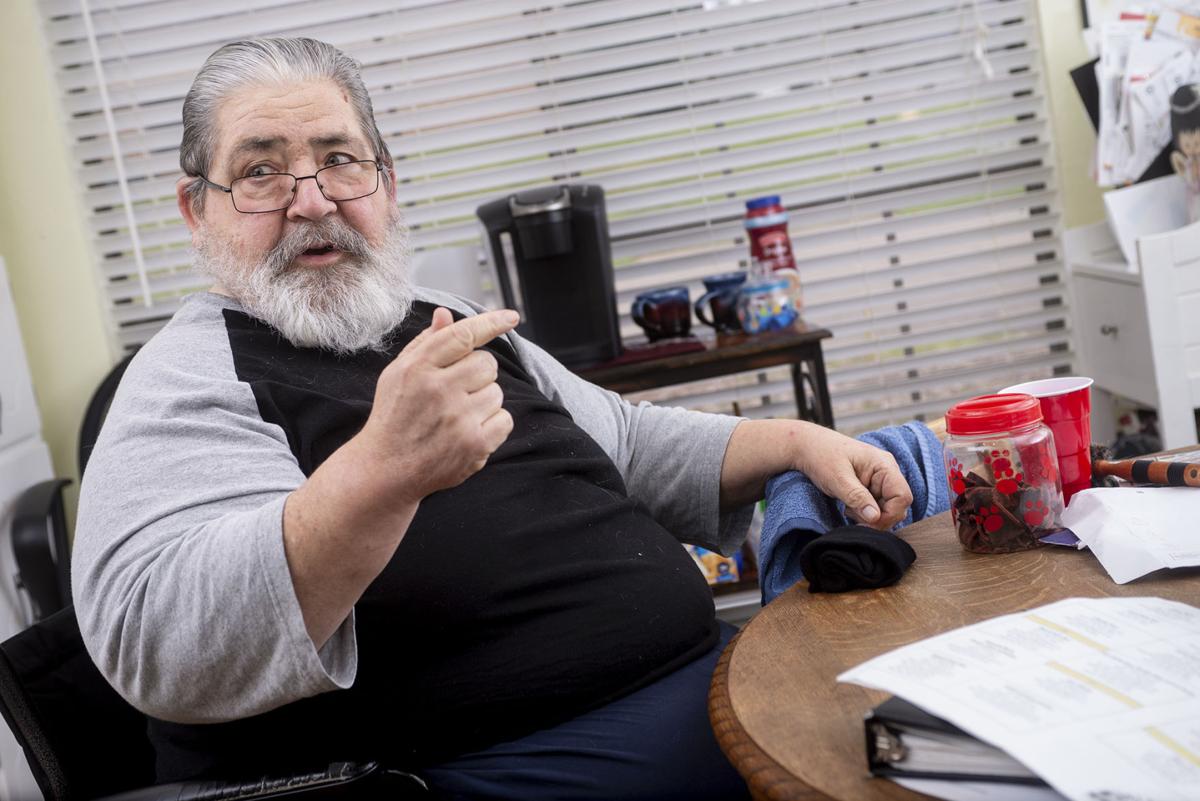 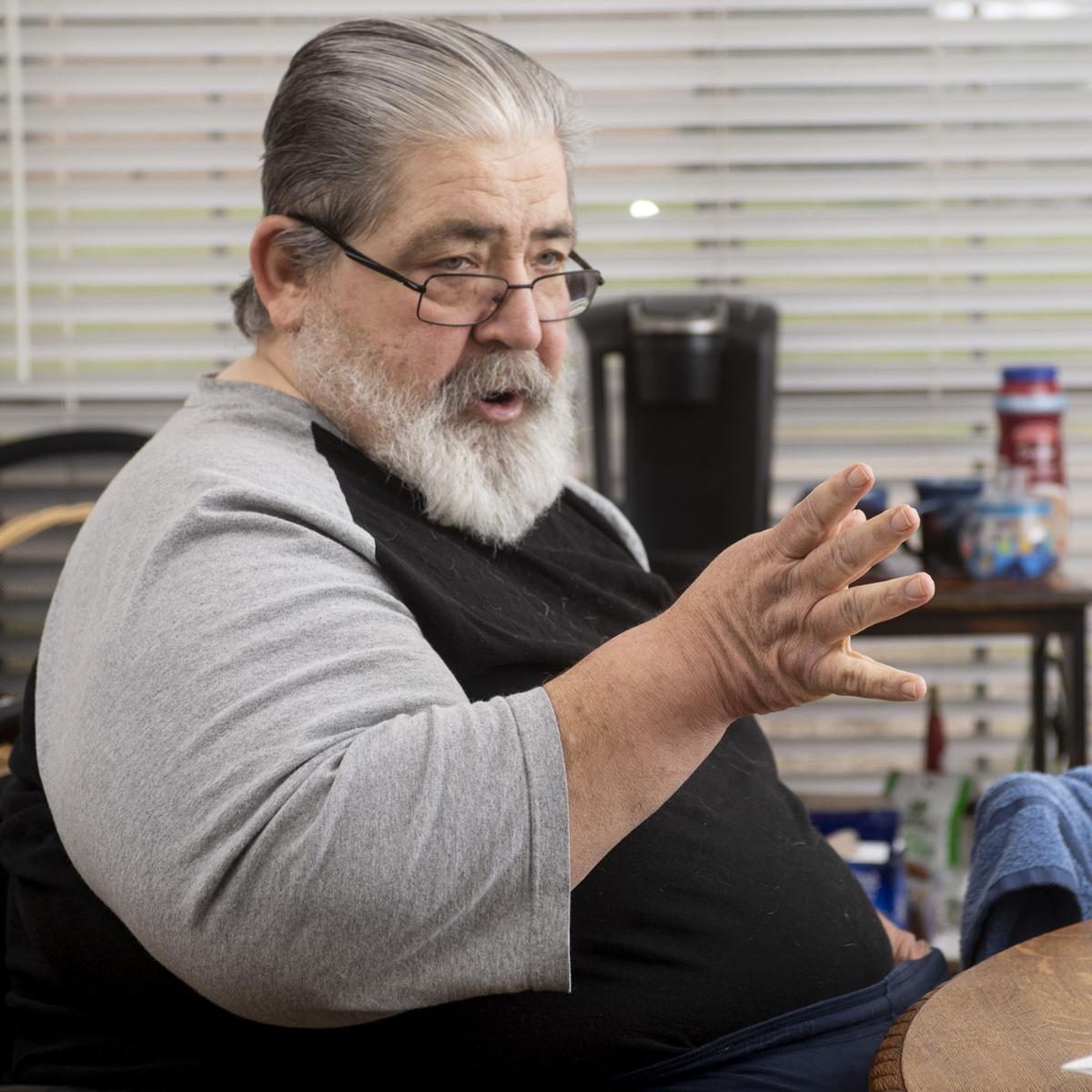 Pete Litterski speaks Friday in his Longview home about navigating the city in a wheelchair. Litterski and his wife witnessed a man in a wheelchair get struck by a vehicle Jan. 17 on North Fourth Street. The man later died at a hospital.

John Garrett Page technically was at fault when his wheelchair was hit by a motorist on a Longview street, killing him, police said.

His younger brother said he understands that Page wasn’t at a crosswalk Jan. 17 when he wheeled into North Fourth Street traffic, but that the distance to the nearest crosswalks lured Page to take the shortcut.

Kevin Page lives in Florida and has never been in Longview, but he says he’s studied the city’s streets using Google Maps and noticed that crosswalks are a considerable distance from the entrances to Walmart and Lowe’s, where his brother was hit.

“In such an area that’s a mall area that has high-speed traffic coming in, to break that up with traffic lights and crosswalks is a cheaper way to solve some of those issues, because people are going to take the most direct route,” Page said. “If people have to break the law to get to where they’re going, I think they will.”

The motorist who hit wheelchair-bound John Garrett Page and then continued driving remains wanted by authorities. Police have released video images of the truck but have reported few other leads.

Kevin Page isn’t the only one questioning why there aren’t more sidewalks, side paths, crosswalks and Americans with Disabilities Act-compliant ramps to help wheelchair- or motorized cart-bound pedestrians navigate Longview.

Pete and Margie Litterski witnessed the Jan. 17 fatality. For her, it was a horrific reminder of the challenges that her wheelchair-bound husband faces when she can’t drive him to doctor’s appointments, the library, shopping or other activities.

“That just really shocked us,” said Pete Litterski, a retired News-Journal editor. “That really affected my wife because she’s sitting next to me knowing that every day that she can she’s helping me get places, but there’s other days that I ride the bus.”

The couple had just left a Fourth Street restaurant. He was getting into their vehicle when he heard Margie say, “Oh, no. I hope he’s not crossing.”

“I looked up there, and the guy in the wheelchair was on the Lowe’s side,” he said, describing how Page rolled from the Lowe’s parking lot into the street toward Walmart.

It was dusk, and Page rolled into the outside southbound lane after a motorist noticed him and stopped in the street, Litterski said.

“While he was waiting and he’s watching to the left, a car stopped, a southbound car, so he came out a little bit, and it took several more cars to pass on the southbound inside lane, but then someone else noticed what was going on so they stopped,” Litterski recalled, “so he got to the inside lane of the southbound.”

As Page tried to cross the inside northbound lane, Litterski watched while listening to his wife’s commentary and then the collision.

Multiple people stopped to render aid — one person performing CPR — before Page was taken to a hospital where he was pronounced dead.

The motorist in the pickup who hit Page will face a hit-and-run charge if he is caught, but Longview police spokeswoman Kristie Brian said the driver wouldn’t have been cited if he had remained at the scene.

According to the report from police, Page was at fault because he didn’t use a crosswalk.

The report also indicates the motorist also hit a second pedestrian, 24-year-old James Carl Frazier of Gilmer, who was walking in the southbound inside lane of Fourth Street trying to help Page.

The Jan. 17 wreck maintains a consistent pattern, according to police records. In each of the past four years, the city has had one traffic incident involving a wheelchair.

A pedestrian in an electric handicap cart declined medical treatment after a motorist backed his pickup into the cart in the Walmart parking lot in July 2017 on Estes Parkway.

Thirteen months later, a woman in a motorized scooter was hit in a parking lot on Eden Drive by the driver of an SUV. The woman was treated at the scene, according to reports.

Last July, the driver of a pickup collided with a wheelchair-bound pedestrian who was using a marked crosswalk in the 600 block of Fourth Street near Christus Good Shepherd Medical Center, where the victim was later transported for treatment.

Brian attributes many collisions between motorists and pedestrians in wheelchairs or motorized scooters to distracted driving.

“A lot of times, I think (motorists) can’t see as they’re backing up and don’t have backup cameras, or even if they do, they still don’t see the sides of the vehicle,” Brian said, “and sometimes the (pedestrians) don’t pay attention. Walking behind them, they just assume that the person sees them and is going to stop.”

She suggests a mantra she’s said many times in her 16-year career as a police officer and particular as a public spokeswoman — slow down, put down the phone and pay attention.

“Get yourself situated before you start to back up and go wherever your destination is. Just look around, and even as you’re backing up, continue to look,” Brian said.

As for pedestrians, “Same thing,” she added. “Pay attention. Get off your phone. Don’t be distracted. Pay attention to cars in the parking lot. Just because you think they see you doesn’t necessarily mean that they do.”

Neither Kevin Page nor Pete Litterski dispute the value of paying closer attention while out in traffic, but they are both critical of how the city accommodates travelers who don’t own or operate cars, trucks or SUVs.

Page suggests the city examine the layout of areas where people come into contact with each other, such as shopping centers. He also said the perimeter of parking lot space could be pared back to provide for designated striped walking paths to improve safety for not only wheelchair-bound pedestrians but also older pedestrians, others with disabilities and people with children.

“I think there’s probably some ways of dealing with that in that area that I’ve looked at that are affordable and make sense,” Page said. “We live in an age of smartphones. Do we have smart people?”

The Litterskis returned to the scene of the collision on Fourth Street later that night to take a closer look at the options John Garrett Page faced when he decided to cross the high-traffic road.

“The reason I went back is I wanted to see if there were any sidewalks there (and) if this guy had any other choices to cross where he did,” Litterski said, “and depending on where he came from, he really didn’t. To get to either of the two stoplights in that area, your only choice is to drive on the street because there’s no sidewalks.”

Litterski faced a similar plight three weeks ago when he was dropped off from a Longview Transit fixed bus route and tried navigating to his doctor’s appointment four blocks away.

He found that, though there were sidewalks along some streets near downtown Longview, they often led to curbs without ramps, which forced him to backtrack around additional blocks as well as go into streets and avoid passing motorists.

Litterski also mentioned intersections involving state highways, where ADA-compliant ramps have been installed but there are no sidewalks. He called them “ramps to nowhere.”

Two upcoming widening projects — on Harrison Road and George Richey Road — feature plans for sidewalks on one side of the road and 10-to-12-foot side paths for cyclists and all types of pedestrians on the other side, she said.

“Those are two examples of where we’ll have better accessibility for anyone using the roadways or using our pedestrian access to get to their destination,” she said.

Also, construction will soon begin on the final two phases of the Guthrie Creek shared use path, which will connect two other walking trails in Longview. Those plans include underpasses beneath two of Longview’s busiest roads, Judson and McCann, so that pedestrians and cyclists can cross without coming into conflict with traffic, she said.

“So just as we’ve seen with the (Paul G.) Boorman Trail under H.G. Mosley Parkway, there’s a tunnel underneath … that would also provide safer mobility to get from point A to point B,” Wyers said.

And there are plans to improve mobility in the city, Wyers added. The city’s bicycle and pedestrian plan crafted several years ago lists priorities of infrastructure needs based upon building off Longview’s existing infrastructure.

The plan looks at the central network that exists for all transportation users and considers opportunities to build more accessible sidewalks and bike lanes “to get more people to where they need to go.

“If we just build sidewalks and bike lanes in all random parts of town, you might have the infrastructure, but if there isn’t connectivity, we can’t get to our destinations without meeting conflicts with traffic or without some sort of interruptions,” Wyers said.

“We also have a public transit access study that we finished several years ago, and that was a consultant came in and they actually studied the connection needs along corridors in Longview for people riding Longview Transit — where those corridors are, where those priorities are — and so those plans get considered and those recommendations are considered as we build on our infrastructure. And, of course, all of those plans consider the need for accessibility and for all users to enjoy the system.”

Patience was a virtue expressed by Page as he listed suggestions that Longview should consider to avoid future conflict points and tough decisions such as the one his brother faced moments before his death.

“It didn’t take place all at once, and those thoughts couldn’t be taken into consideration all at once,” he said. “From the satellite photos, I see that there are opportunities to change something that is problematic. ... We’ve got to move people through traffic, and creating situations where there’s high anxiety and people in cars who are moving in cars in close proximity, that’s part of the equation.”