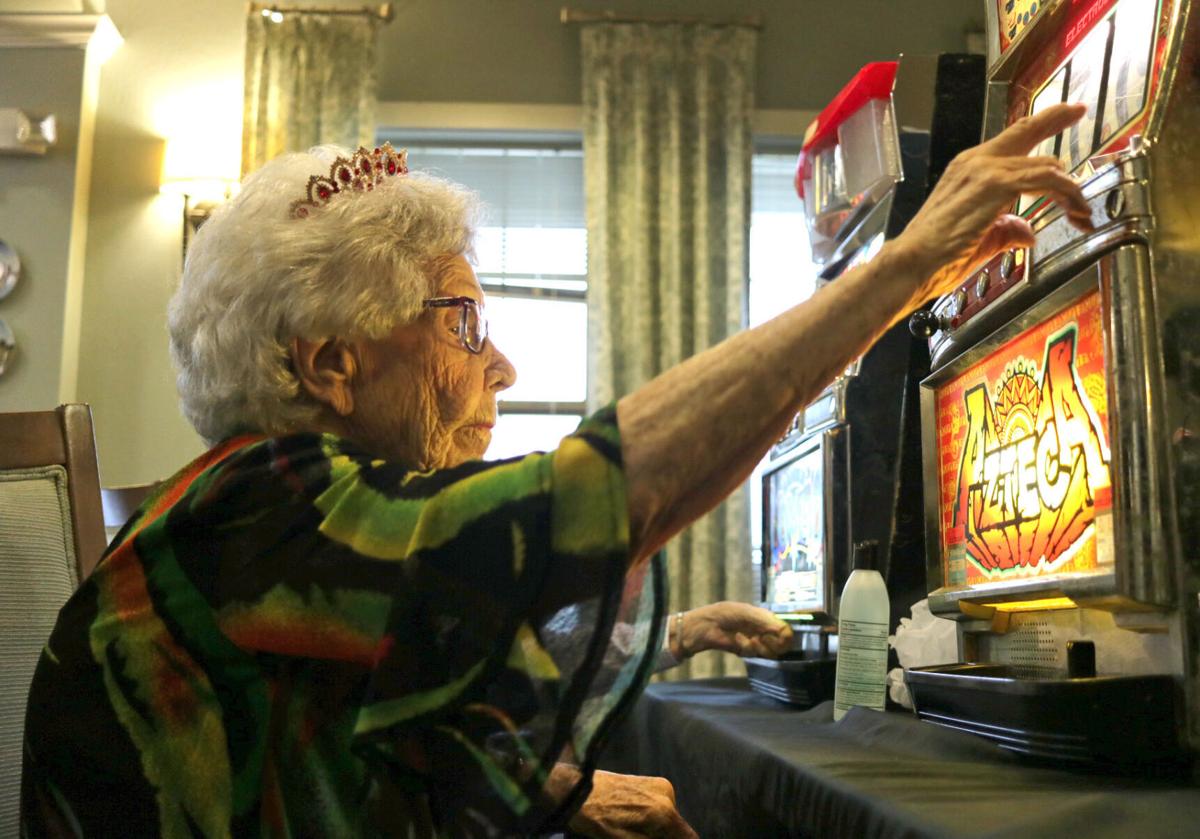 For her 105th birthday party, former Longview resident Hazel Bankston received a casino-themed party at The Hamptons, an assisted living facility in Tyler. 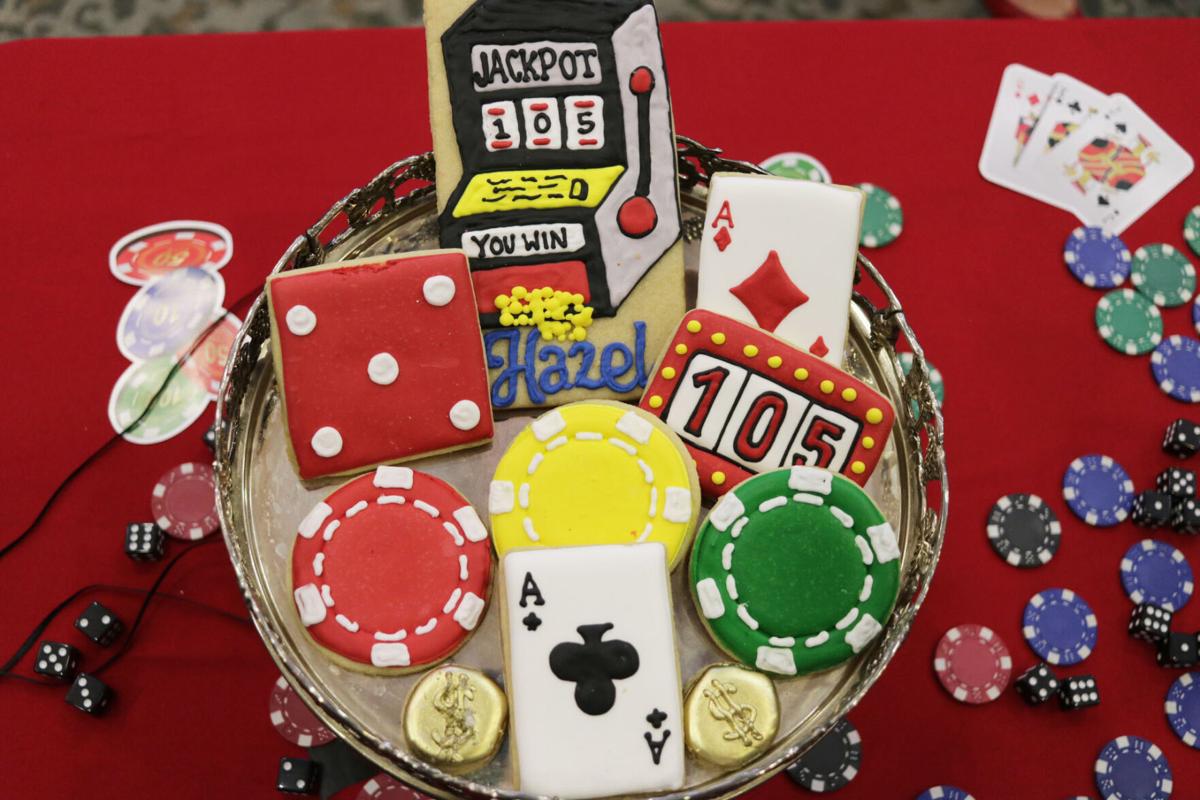 A casino-themed birthday cake is seen Tuesday at the birthday party for 105-year-old Hazel Bankston. 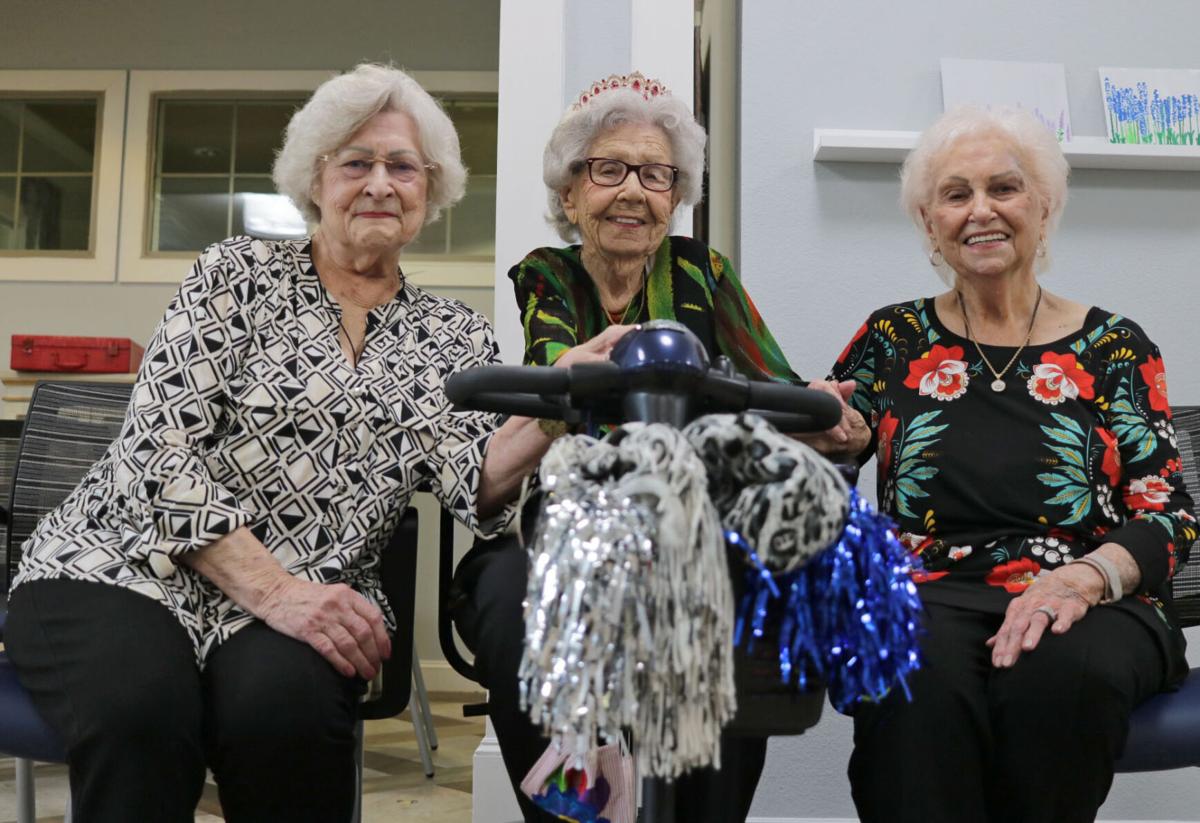 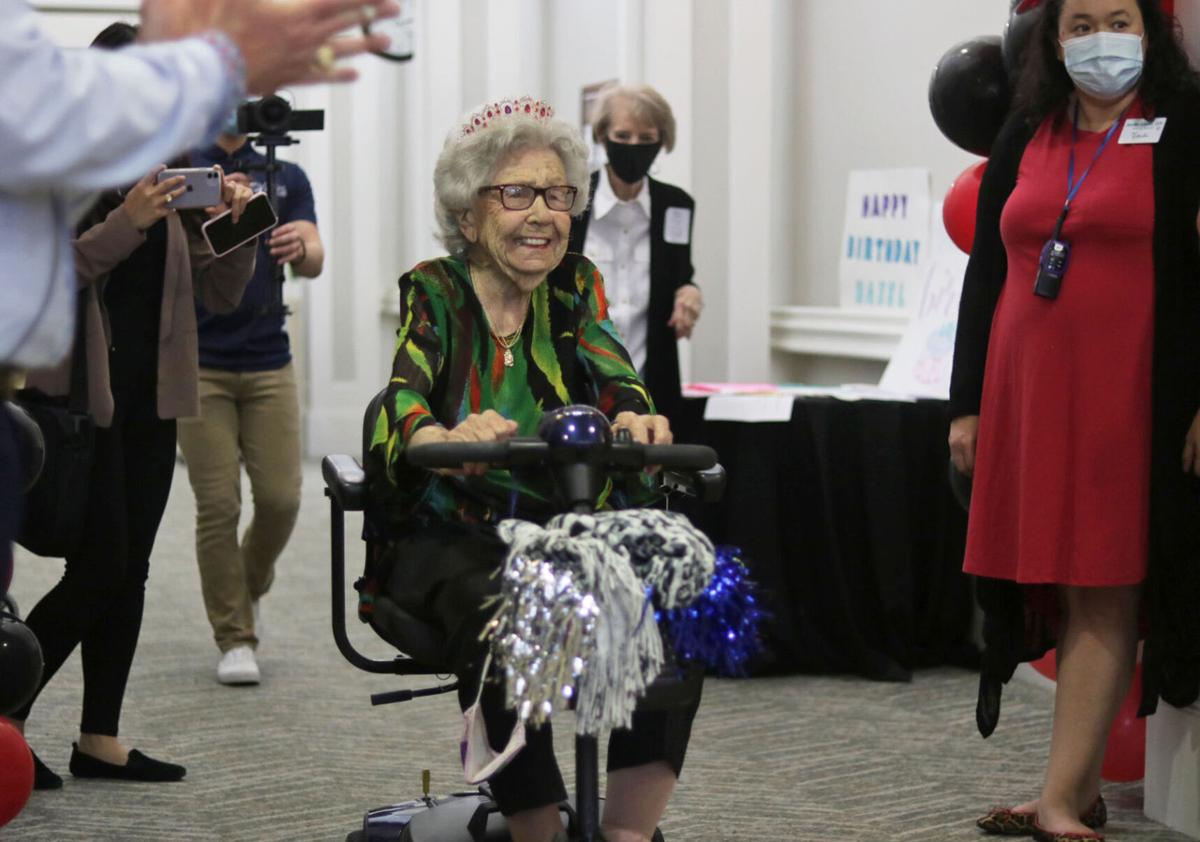 Former Longiview resident Hazel Bankston arrives in her mobility scooter to her casino-themed 105th birthday party Tuesday at The Hamptons in Tyler. 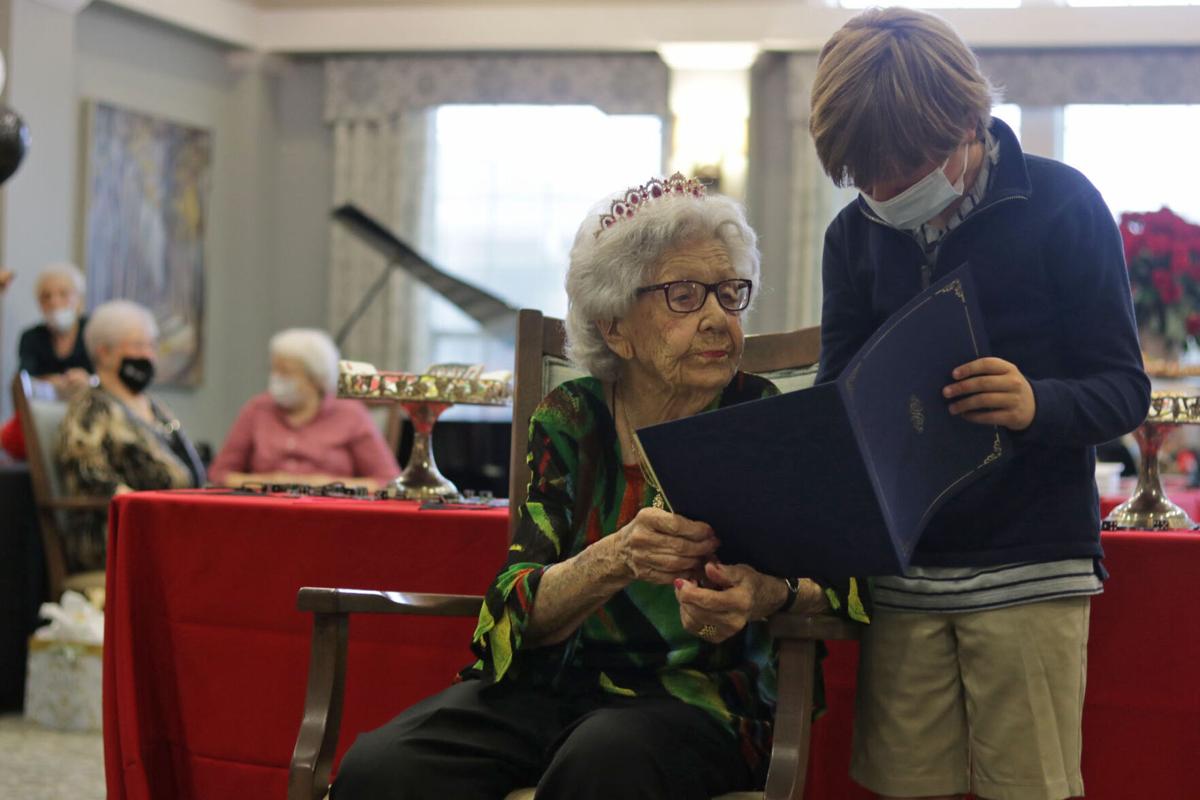 Ten-year-old Tripp Woldert reads a proclamation declaring April 27 as “Hazel Bankston Day” with his great aunt, Hazel Bankston, who turned on 105 on Tuesday. 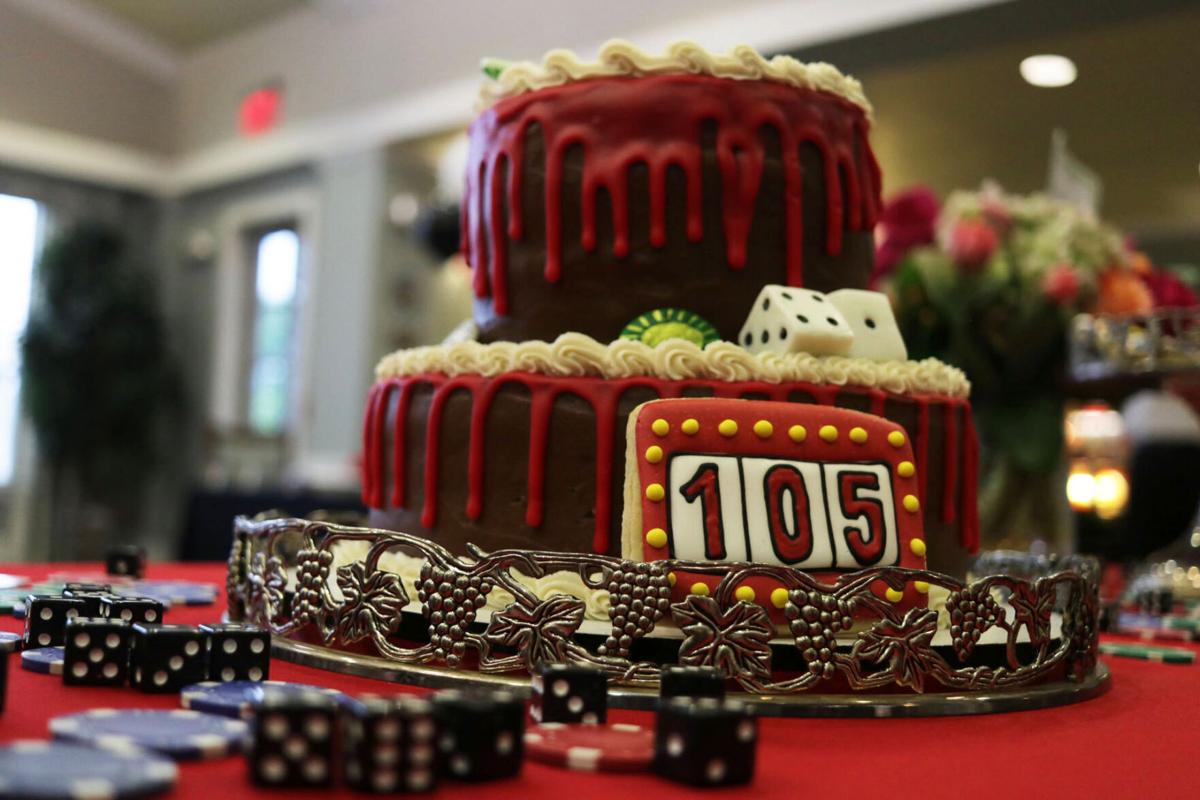 For her 105th birthday party, former Longview resident Hazel Bankston received a casino-themed party at The Hamptons, an assisted living facility in Tyler.

A casino-themed birthday cake is seen Tuesday at the birthday party for 105-year-old Hazel Bankston.

Former Longiview resident Hazel Bankston arrives in her mobility scooter to her casino-themed 105th birthday party Tuesday at The Hamptons in Tyler.

Ten-year-old Tripp Woldert reads a proclamation declaring April 27 as “Hazel Bankston Day” with his great aunt, Hazel Bankston, who turned on 105 on Tuesday.

TYLER — The invention of the pop-up toaster, Band-Aids, insulin, Q-tips, frozen foods, televisions, the copy machine and modern-day deodorant are some of the developments Hazel Bankston has seen in her 105 years of life.

This past week in Tyler, the former Longview resident celebrated the monumental birthday with cheers, slot machines and wine among family and friends.

The celebration at The Hamptons, an assisted living facility in Tyler, began with UT Tyler and Grace Community School cheerleaders performing for Bankston outside her window.

In the hall inside the living community, an entire room was filled with decorations and slot machines to accompany a casino-themed birthday party for Bankston.

But most importantly, the birthday girl had her favorite wine.

Bankston said she has a nightcap with her friends every night with small amounts of the beverage.

“That keeps you going,” she said.

Three months ago, she was driving in Dallas traffic, where she owned a condo with her best friend of 15 years. After her friend died two weeks ago, Bankston moved into her new home in Hamptons Assisted Living, where she has made new friends, including a special two.

Alice Dingler, Helen Bozeman and Bankston are known as “The Three Musketeers” around the facility because they are best friends. She said they inspired her to pack her bags and move to Tyler.

“They’ve been there for me. They certainly have made the transition easy —they really have,” Bankston said.

Bankston’s life is fully lived, and she said she’s had a lot of fun. When she was born during World War I in 1916, her mother died, and at 2 years old, Bankston lost her father. She was raised by her maternal grandparents in Pleasant Hill, Louisiana, but after graduating high school, she moved to Longview, where she would live until she received an offer to work for the government in Washington, D.C.

After some time in Washington, Bankston went to work for the Federal Deposit Insurance Corp. in Chicago. She later moved to Dallas to work for the U.S. Department of Agriculture. This is where she would retire after working for the Internal Revenue Service as chief of records.

Bankston never married because she said she didn’t have time to think about relationships or starting a family. Regardless, she said that if she could go back in time, she’d do it all over again, just as she did in this life.

After the years she’s lived, Bankston talked about the best advice she can give to women.

“I didn’t work very hard. I don’t have any regrets. I’d do it all over again. I believe in having fun. I’ve had some mighty good trips with my friends,” she said.

Bankston loves to play bingo and she enjoys her new electric scooter. She visits and tells stories to her caregivers and looks forward to the wine at the end of the night.

For those wanting to know the secret to Hazel’s longevity — she said it’s that she was never married and had no children. But to those who know and love her, it’s really her infectious smile, warm sense of humor and kindness toward all.

“In honor of the precious life and the recognition of her steadfast commitment to her beloved family and friends, that’s demonstrated through her many decades of dedication and loving service with gratitude and admiration for your dedicated faithfulness to God, your family, your friends, our community and our nation, thank you very much,” Gohmert said as she read the declaration.

“I just want to thank everybody for coming,” Bankston said.