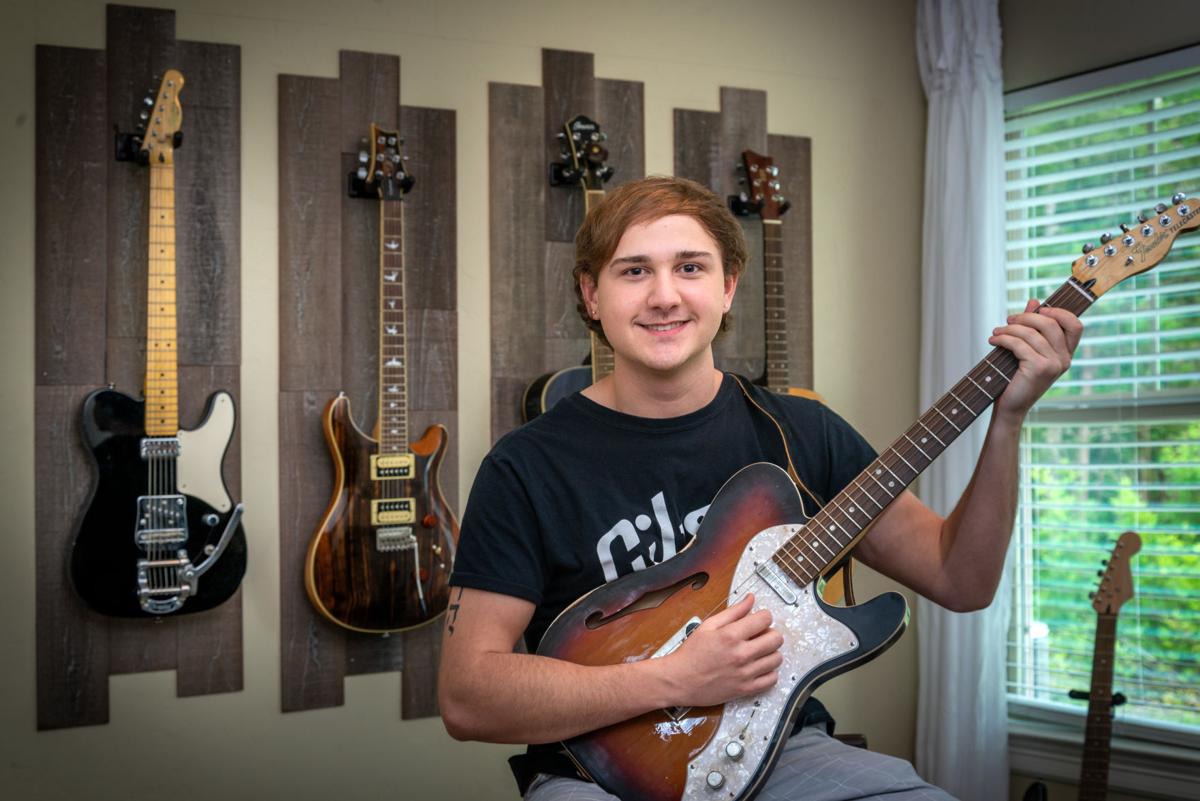 New Hallsville High School graduate Reed Cook, seen Monday, is self-taught on the guitar. Reed wasn’t expected to survive a battle with cancer as a child. 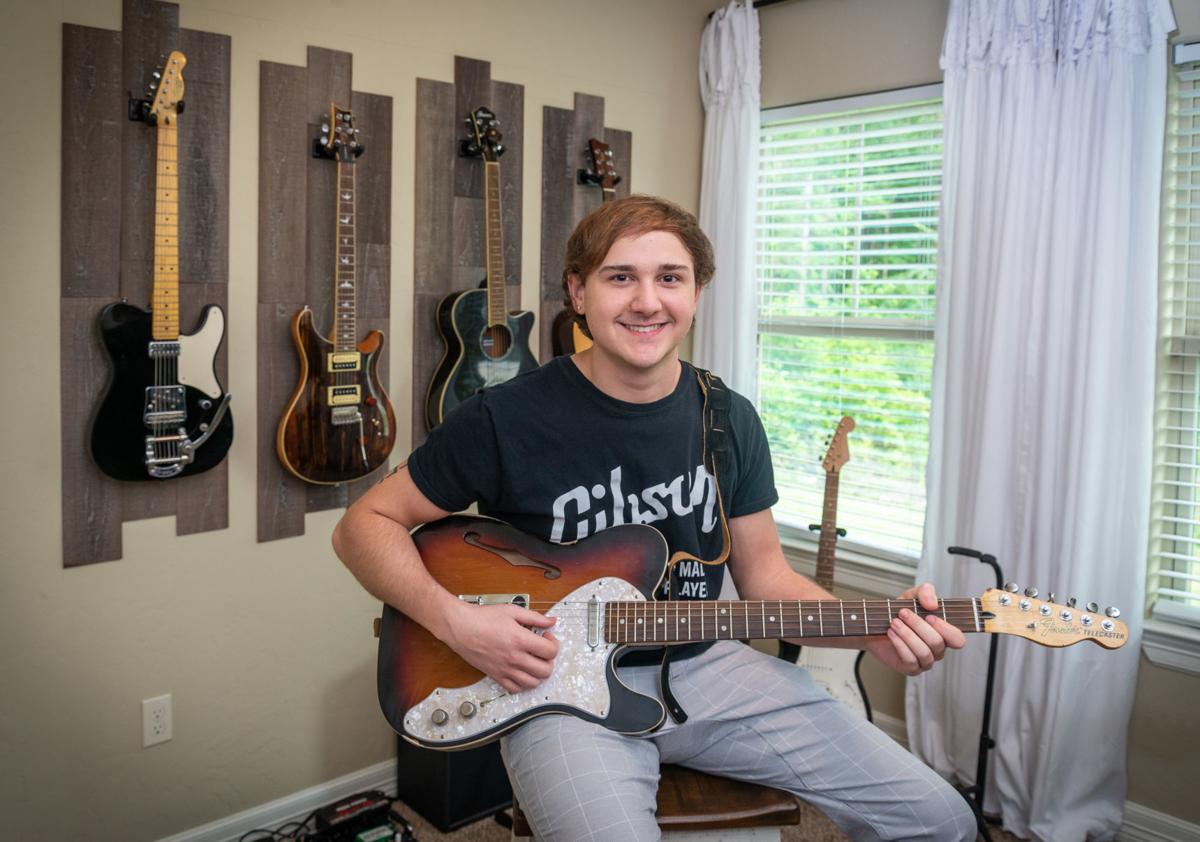 New Hallsville High School graduate Reed Cook, seen Monday, is self-taught on the guitar. Reed wasn’t expected to survive a battle with cancer as a child.

At 19, Reed Cook doesn’t remember a whole lot about the treatment he underwent for the cancer that almost took his life when he was 5.

Still, the experience has formed his life in more than one way.

“I think it’s really changed my perspective on how fortunate I am,” said Cook, a new Hallsville ISD graduate. “Even though I don’t remember all of it, I still know what did happen and just the likelihood of a kid my age surviving ... The chances are a million to one. I just try to remind myself of that a lot of times and just know how fortunate I am.”

His mother, Wanda Cook, remembers finding the knot on his head when they were headed to the beach, right before he would have started kindergarten. She initially didn’t worry too much about it. He was a little boy and little boys play rough, but he didn’t want to go outside while they were at the beach, and that was concerning, she said.

When they returned home, a trip to the doctor led to X-rays and scans and then the discovery of a Nerf-Football-sized tumor on his right kidney. She said it was stage 4 clear cell sarcoma, a rarity in children. Because it was unheard of in a child his age, she said, it took six to eight weeks for doctors to develop a treatment plan for him.

“We’re a family of faith. We began to pray at that time that God would just give them the wisdom to know what they needed,” Cook said of her family, which includes her husband, Destin, and their now-almost 31-year-old son.

Reed wasn’t expected to survive, she said, but he battled for 1 1/2 years, and the cancer went into remission.

“He’s done good, and every milestone we’ve celebrated. Our whole family is so thankful,” she said. “We never thought we’d see him graduate high school.”

Now, he is uses his experience to help her.

Reed and his parents moved from Louisiana a couple of years ago for his father’s job. For about the past year, Cook has been fighting gallbladder cancer that metastasized to her liver and colon. She has continued working as much as possible to maintain her health insurance through surgeries and chemotherapy, but her husband lost his job in February, she said.

The family tries to focus on the positive, Cook said.

“The last two months of treatment, I hardly worked any and have not been able to take care of myself,” she said. “Had (my husband) been working, I don’t know what I would have done. He’s been here to help me and cook and help me get to my doctor’s appointments. ... We see it as a Godsend so that he could be home to take care of me.”

Reed has taken off from school to be at her surgeries and stayed at her bedside when she needed help. He’s a good nurse, she said.

She’s asked him for advice about things to do make her feel better when she’s physically ill, she said, describing him as a “teacher” and her “inspiration” through her illness.

“I’m glad I didn’t go through it first, because I have cried many nights and said I could have never put my son through that (the treatment),” Cook said. “To think back and think about all he went through at 5.”

Reed said he works to be there for his mom because that is something he remembers about treatment — how important people were to him while he was hospitalized. There’s not much to enjoy about life when a person is stuck in the hospital, sick from surgeries and treatments, he said.

“But the thing you’re able to enjoy is people and family” being there, he said. “I just wanted to make sure when she’s come out surgery and stuff, when she’s not able to go outside and enjoy the everyday things, that I was there to support her, and I think it’s just all about support. That’s really the greatest thing people can do for cancer patients or anyone else who is sick or in the hospital.”

Reed said all his teachers at Hallsville have been “amazing.”

“I’ve been to several schools. I’ve never been to a school that’s had such amazing counselors and teachers,” he said. “It was really fortunate that during the hardest years of high school I was able to go to a school that had such a positive atmosphere and great people who are ready to support you if you need it.”

Reed was in the band at his previous high school, West Monroe, Louisiana. After he moved to the Longview area, he began to focus his music on what he said God has been calling him to since he was a child — guitar. He’s self-taught and began playing at church and other places as he’s improved.

His mother said he’s taken some dual credit courses and received a couple of scholarships. The family is concerned about whether they’ll be able to make LeTourneau happen financially considering everything that’s going on, but she said, if not, he could attend Kilgore College first and then transfer.

Cook said her son decided not to participate in Hallsville’s graduation ceremony Monday night because he knew she would want to be there, but he didn’t want to risk damaging her health further. The family planned to have its own celebration, she said.

Outside of school, Reed has enjoyed ministry trips through church or working with local aid organizations.

“That’s something I’ve learned to enjoy, because as I’ve grown up, I kind of started to realize how important it is to help other people and how good it makes the other person feel, but also how good it makes you feel to help somebody out,” Reed said.