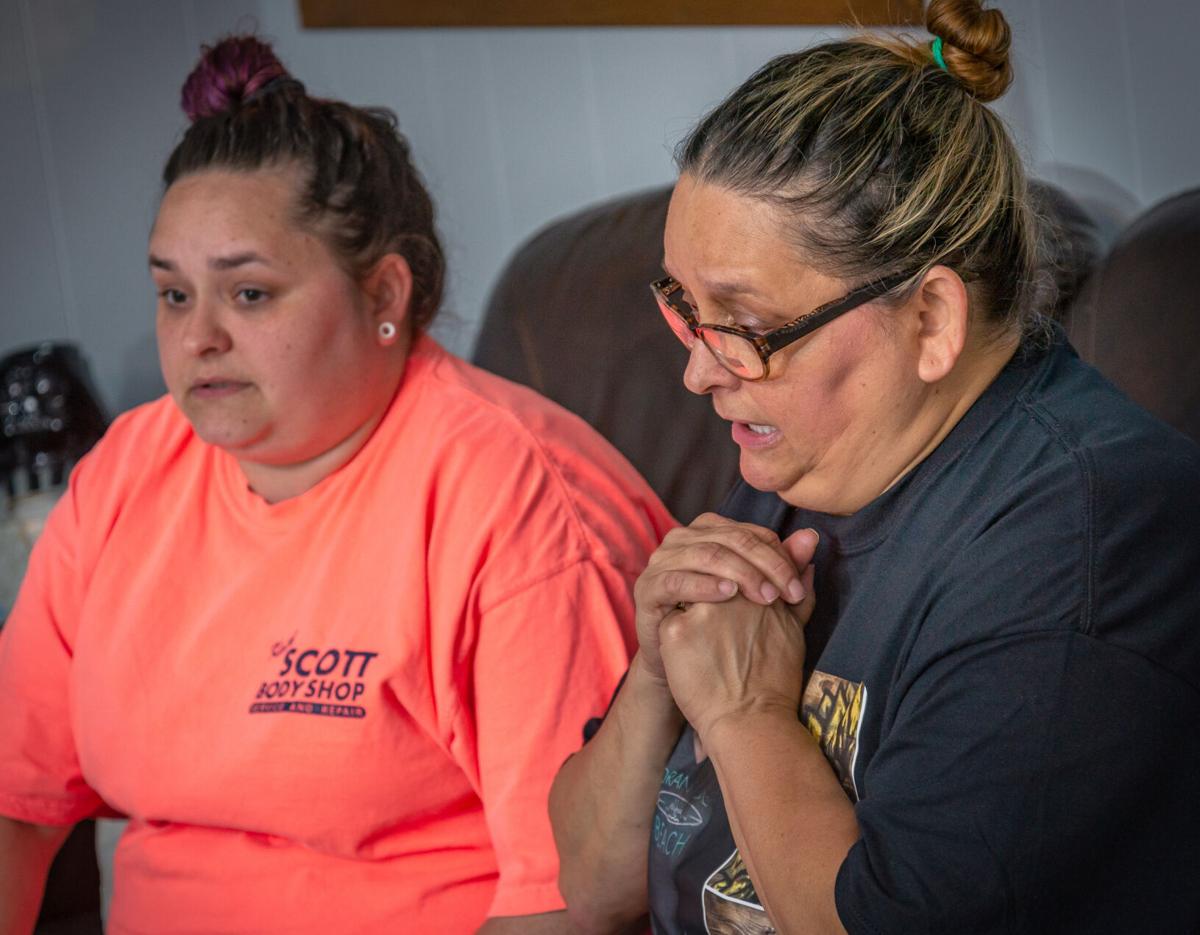 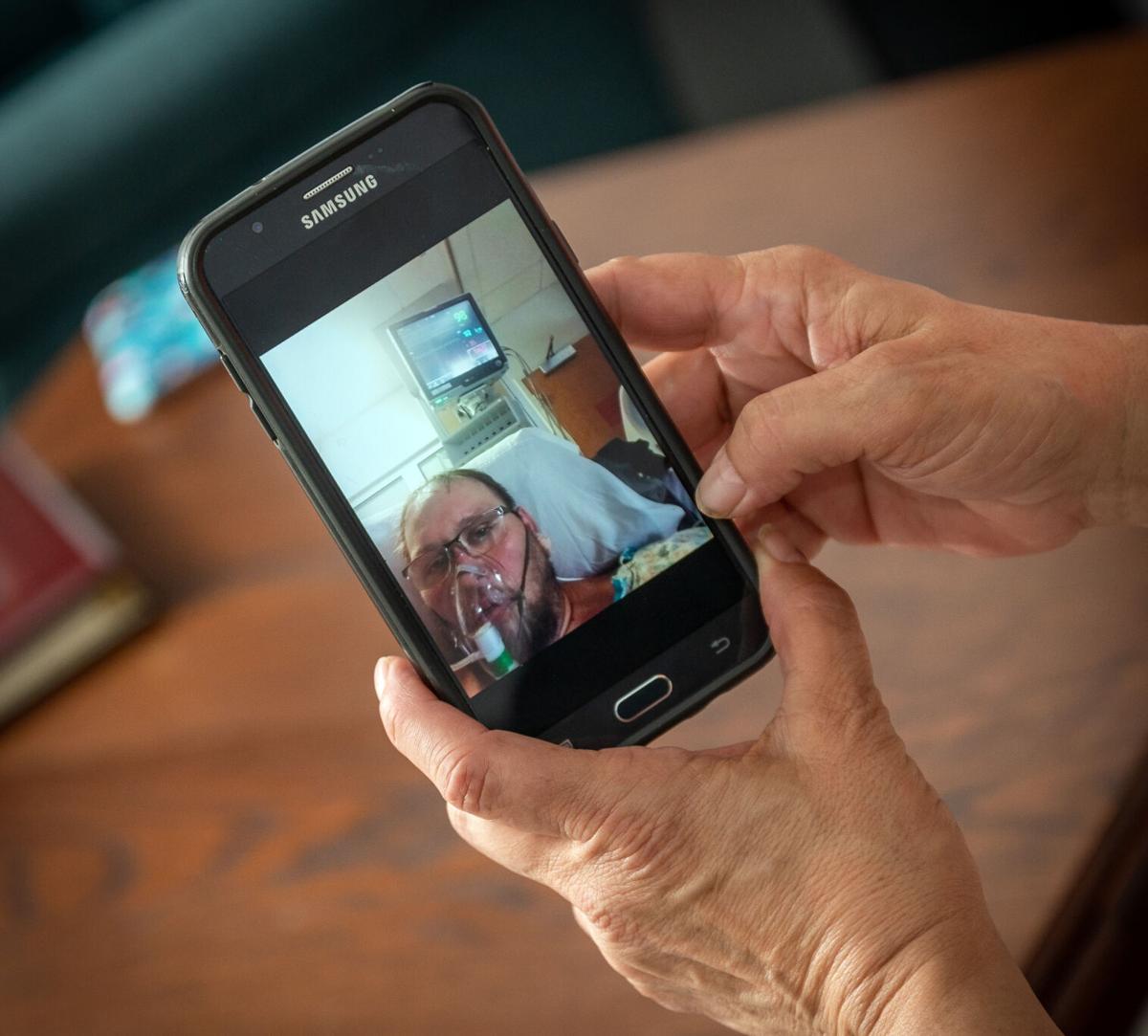 Carolyn Harper says she falls asleep at night looking through photos on her phone of her son, Gordon Lee Harper, who died in late July after contracting COVID-19. (Les Hassell/News-Journal Photo) 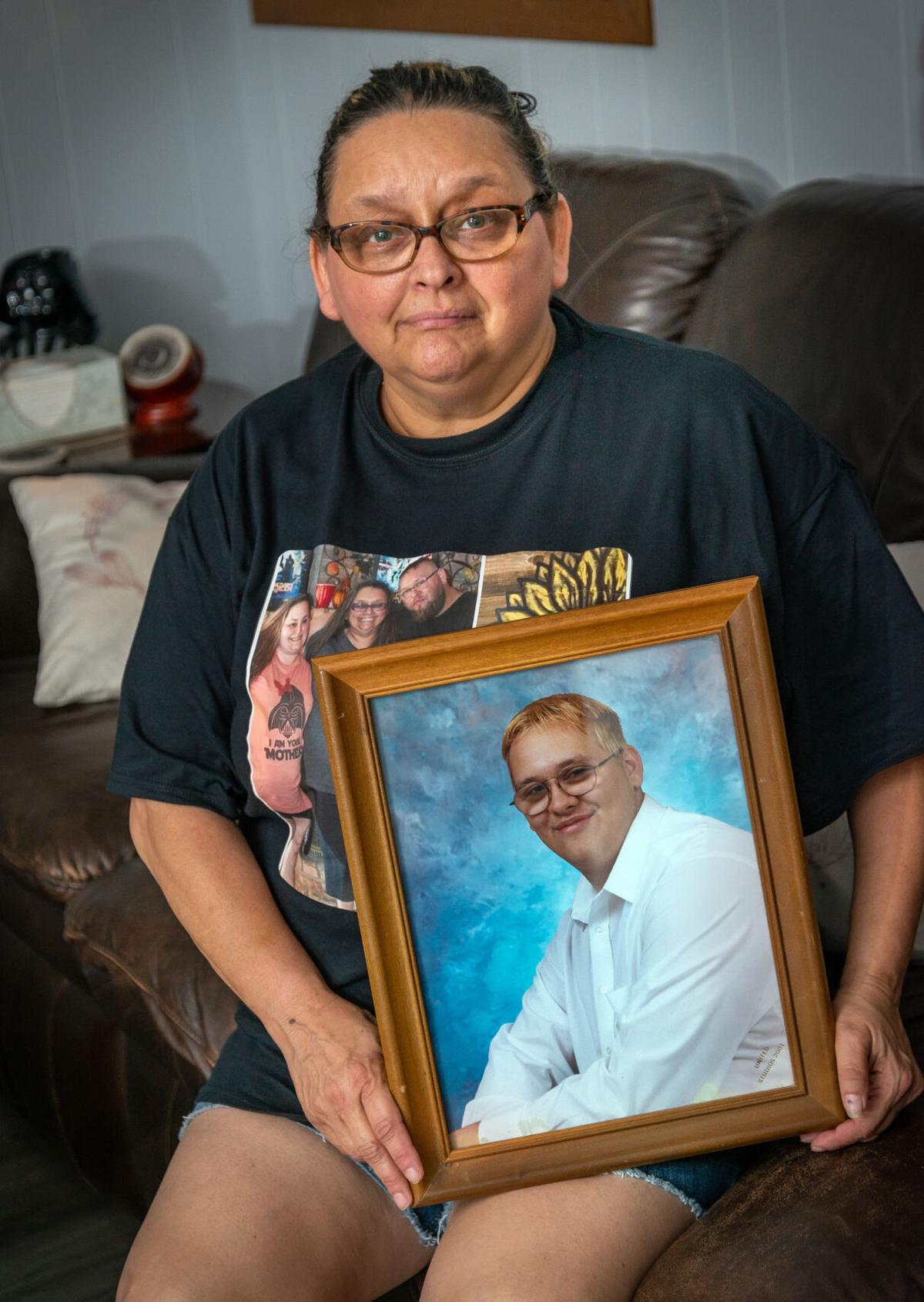 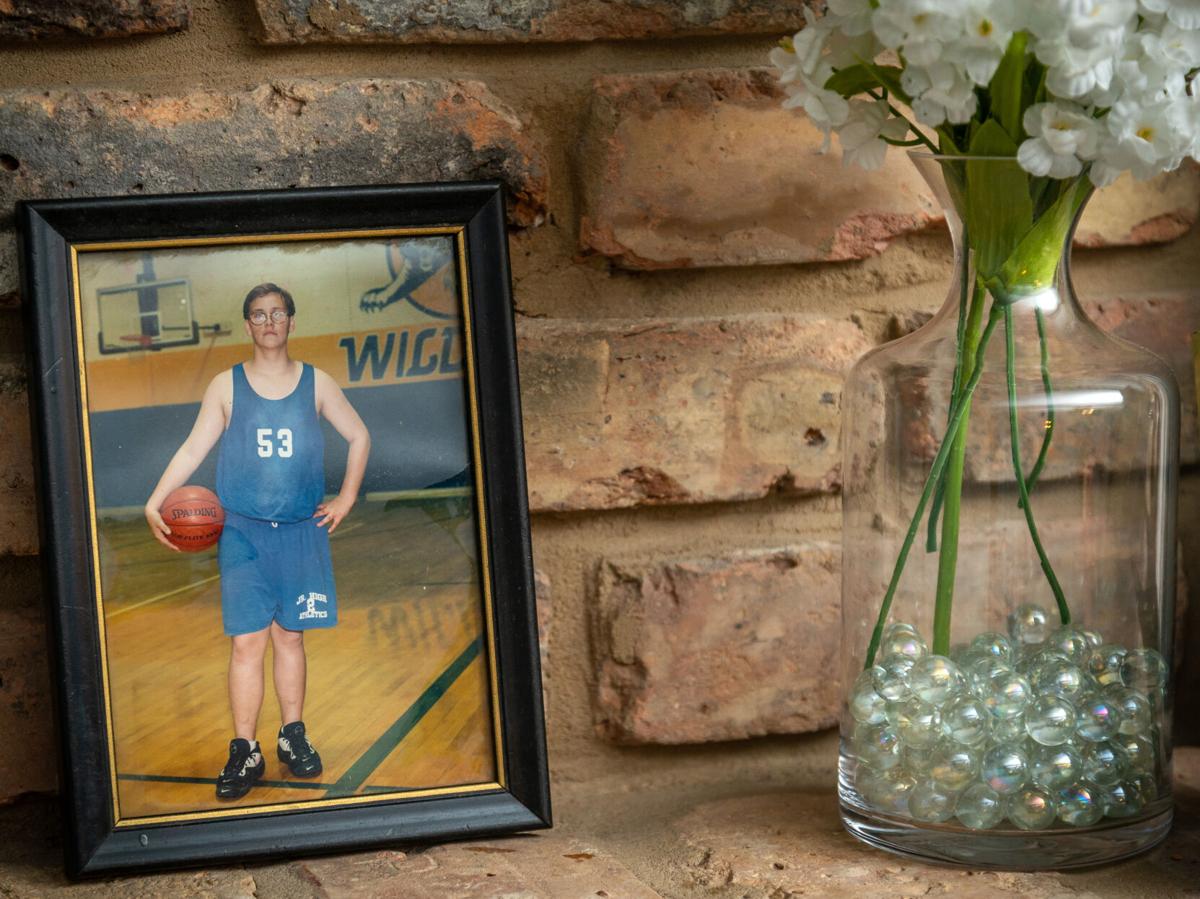 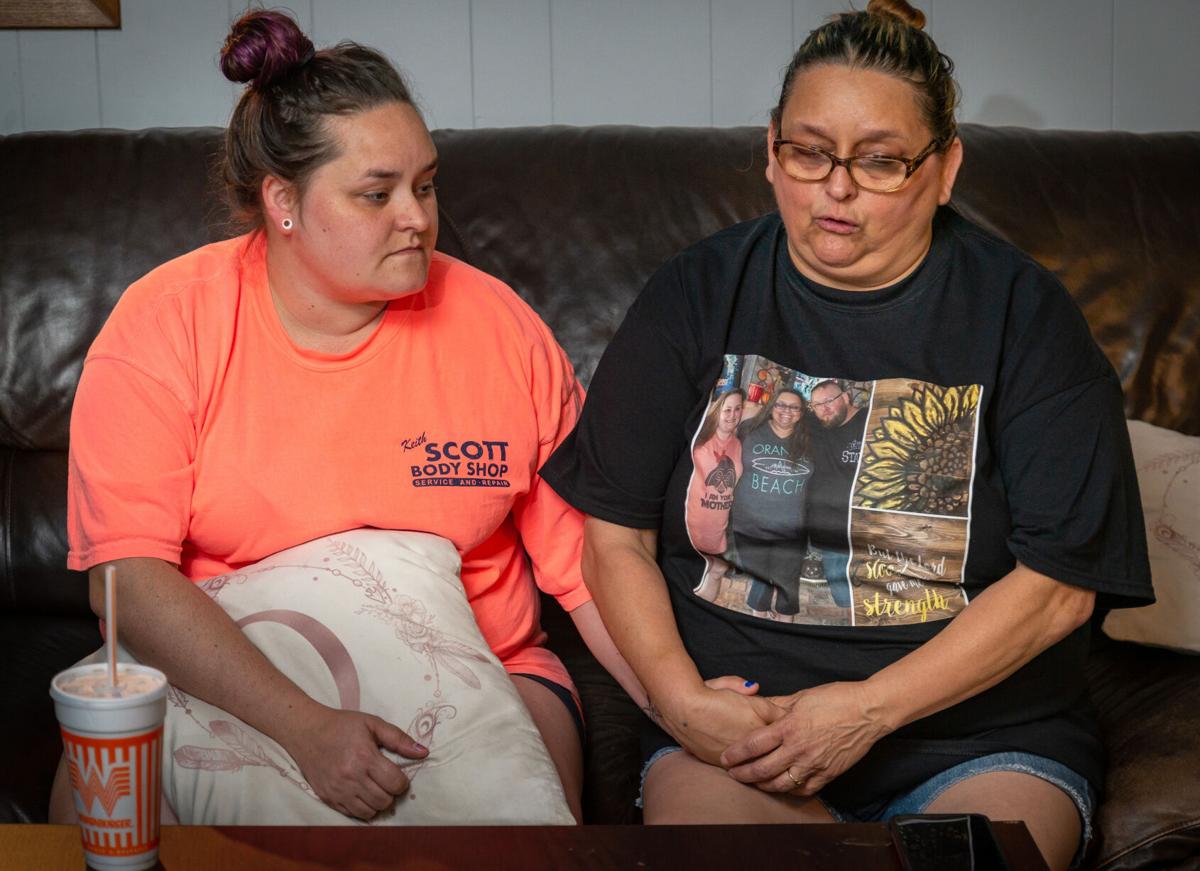 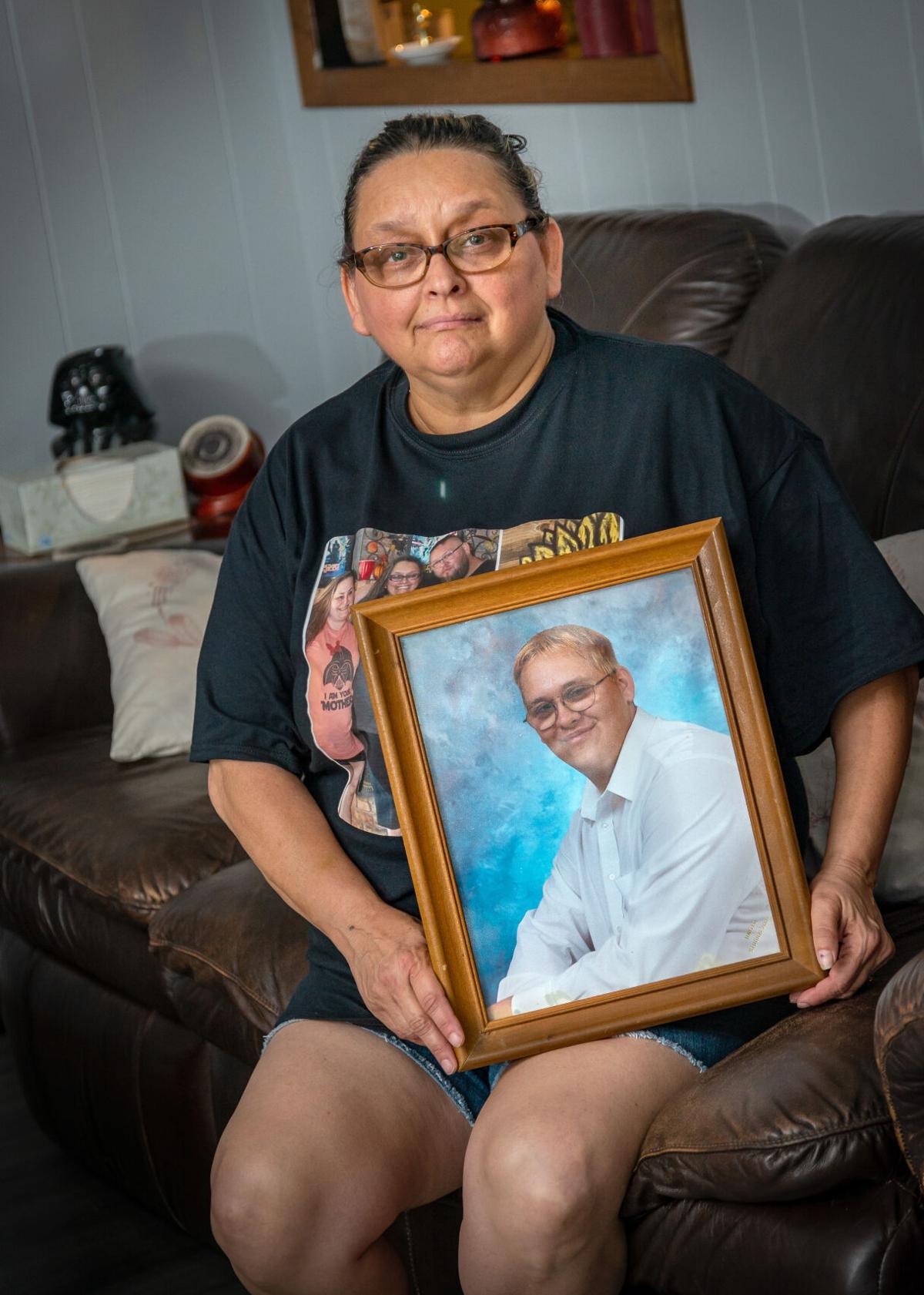 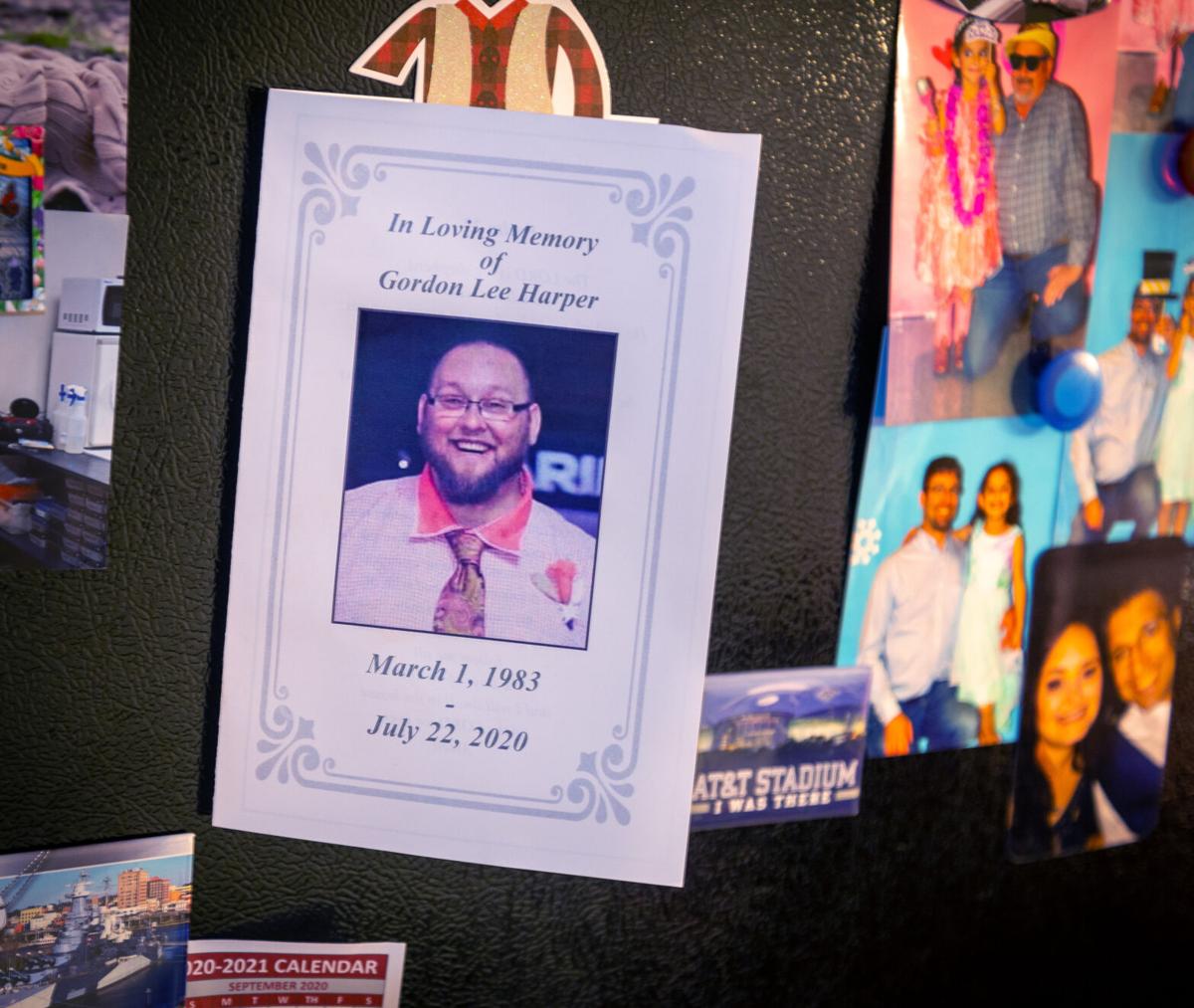 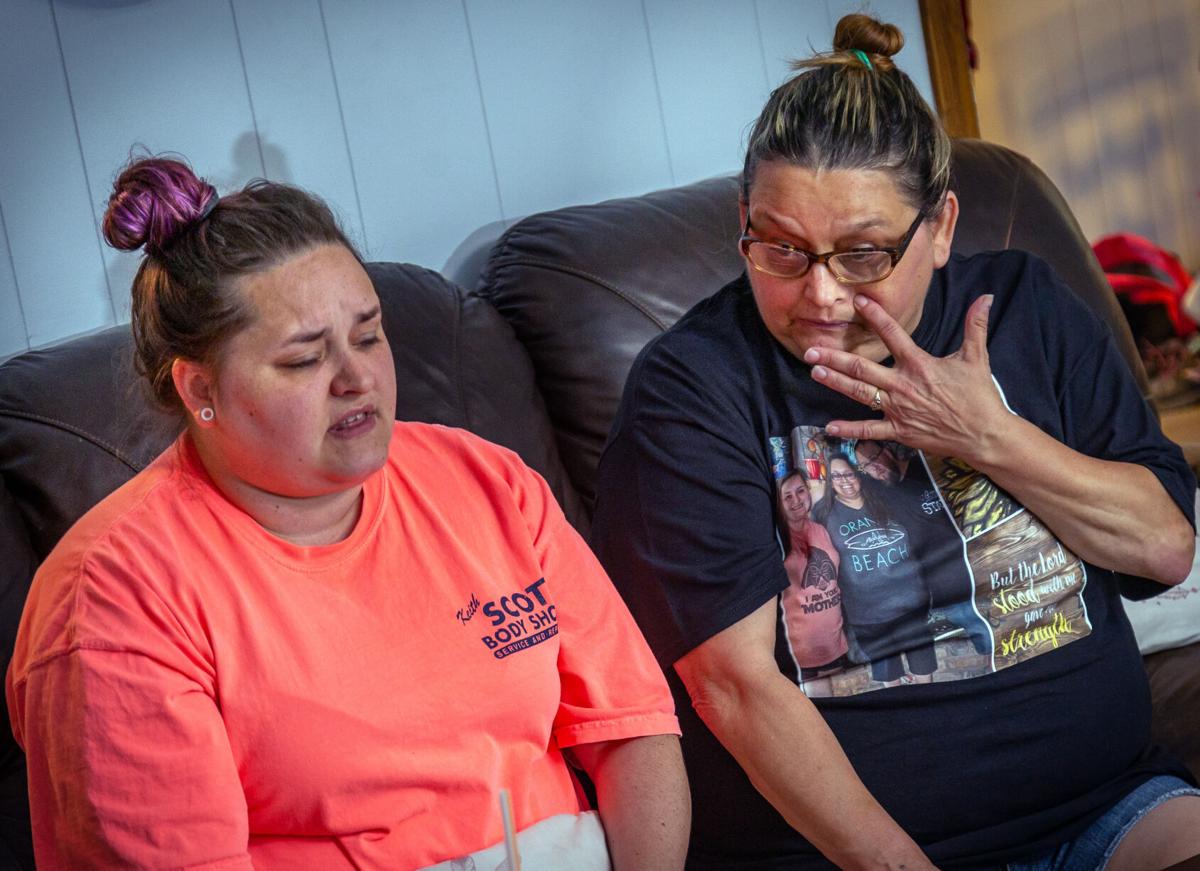 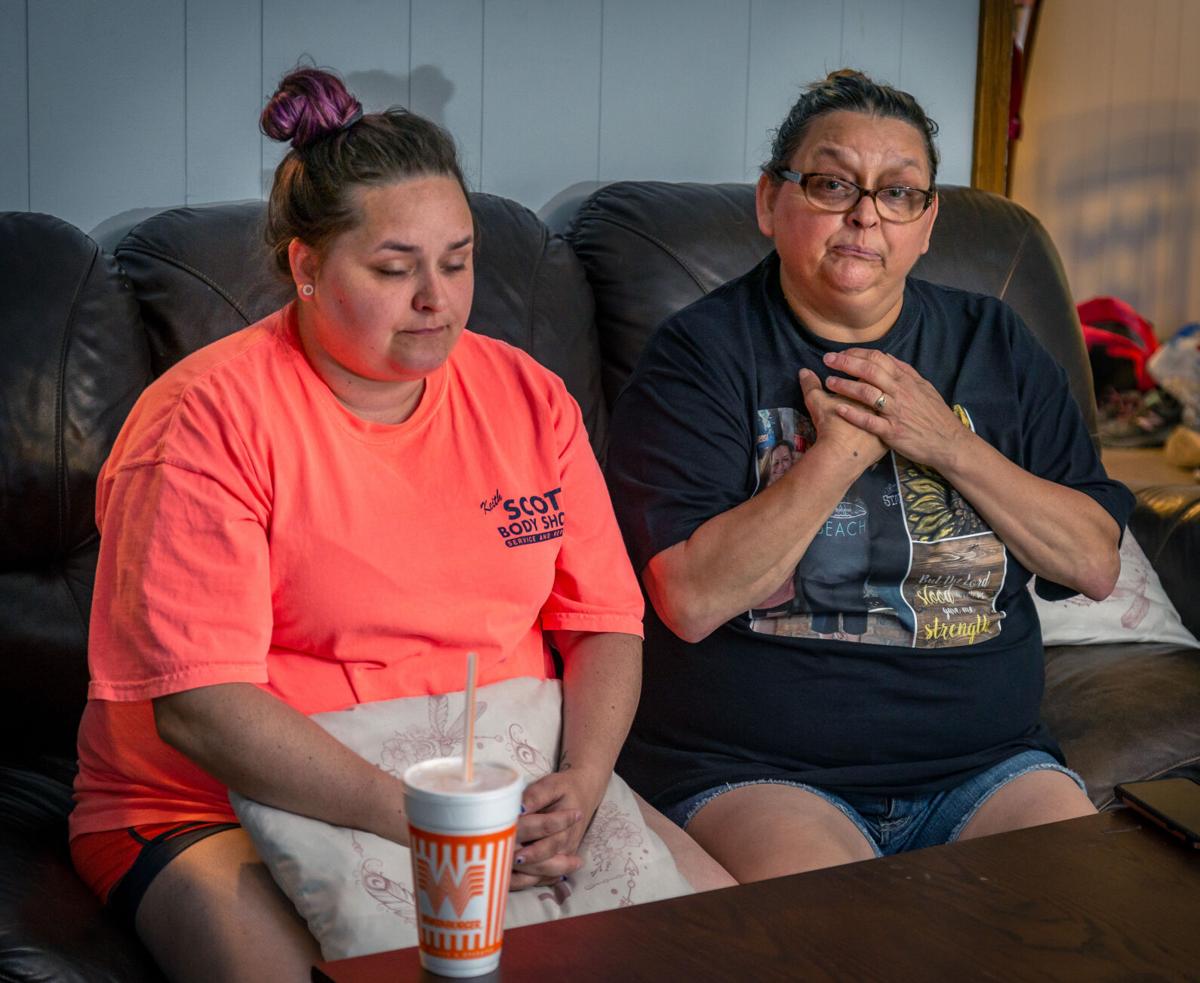 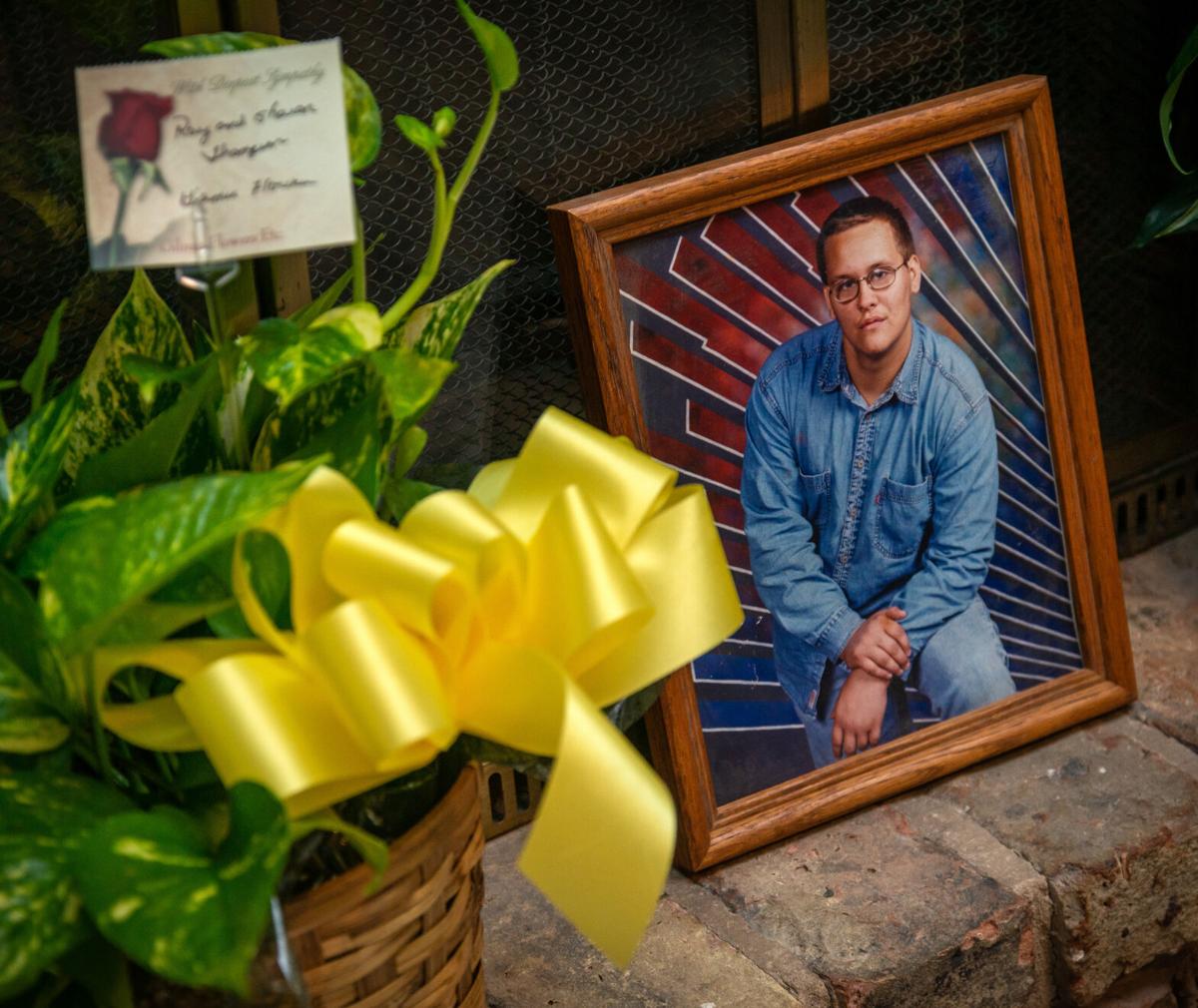 Carolyn Harper says she falls asleep at night looking through photos on her phone of her son, Gordon Lee Harper, who died in late July after contracting COVID-19. (Les Hassell/News-Journal Photo)

WHITE OAK — Carolyn Harper picked up a large framed photo off the mantle at her daughter’s house. In the photo was her son, Gordon Lee Harper, as a high school senior almost 20 years ago.

“This is my favorite picture of him,” Carolyn, 56, said with a crack in her voice.

On July 22, Gordon, 37, died of complications from COVID-19. His family is trying to cope with the loss of their son, brother and uncle.

“I haven’t been doing too good,” Carolyn said, sniffling back tears. “One minute I’m OK, the next minute I’m not ... I still think he’s gonna walk through the door and tell me, ‘Mom, I’m OK. Don’t cry.’ I know it’s not gonna happen, but I feel like this is a bad dream.”

“Somebody can give condolences, but you can only hear it so many times before you become numb to people saying ‘I’m sorry’ and ‘I’m praying for you,’ ” said Gordon’s sister, Rena Cunningham, 32.

He is the youngest person to die from COVID-19 in Gregg County.

Gordon was born in Corpus Christi to Jeff and Carolyn Harper and raised by Carolyn and Terry Gage, whom he called his dad.

“That was his daddy,” Carolyn said. “Terry raised him from the age of 2 years old until the day he died.”

Gordon played sports, including football, and graduated from Big Sandy High School in 2001.

He worked many types of jobs over the years but most recently worked at Jaguars club in Longview as a DJ.

“The girls out there really had a lot of respect for him,” Carolyn said. “The dancers, he protected them and he watched out for them.”

Family and friends described him as genuine, loving, generous, funny, good-natured, protective and “just the best.”

“He was a big teddy bear,” Carolyn said of Gordon, who was known as Gordy. “He would give you his last dollar. He was the kind of friend you could call in the middle of the night if you needed a ride home, and he’d go get you.”

On June 22, Gordon traveled to Galveston with friends. He began feeling symptoms less than a week later, and he was hospitalized July 2 when he started to cough up blood.

Carolyn said she would call him two or three times a day to check on him.

“I mean, I’m sure all the nurses got tired of me, but like I told them, this is my baby,” she said.

Rena and her family had a scheduled vacation to North Carolina in mid-July. Gordon told her to go anyway and that he would see her when they got back. They talked over video chat, and she dropped off a Coke Zero, one of his favorite drinks, at the hospital.

“I told him I love him, and that was the last time I really talked to him because a day, two days after that he was put on a ventilator and couldn’t talk,” she said.

Gordon asked his Facebook followers to drop off a Coke Zero for him as he went into ICU quarantine July 12.

A day later, Gordon wrote his last Facebook post, saying “I need all your prayers. They are incubating me for repository failure. I will not be able to reply.”

It seemed as if he was getting better but then took a turn. Mother and son even saw each other through FaceTime when he was on a breathing machine and could not speak.

Carolyn said she felt in her heart toward the end that he might not make it. Not long after, the family was called to come to the hospital.

When they arrived, doctors and nurses pulled Carolyn aside into a private room.

“I said, ‘Don’t tell me my Gordy is dead,’ you know, not my baby,” Carolyn said. “And they didn’t really say anything. They didn’t need to say anything because we already knew. I mean there’s nothing they really could have said to help.”

Rena said the condition may have caused blood clots, leading to cardiac arrest.

“Well, it’s not just because of the COVID. It’s also because of his underlying condition with his Type 2 diabetes,” she said. “His overall health just wasn’t the best and, you know, that makes the COVID worse.”

The family said the treatment and illness wore on his body.

“When we saw him in the casket, it was pretty scary,” Rena said. “(COVID) takes a huge toll on your body —not just inside but outside. He didn’t look like my brother.”

Rena said she could tell he was in a lot of pain and believes Gordon knew he might not leave the hospital.

“I think that’s probably why he told us, me and my husband, to go ahead and take the kids on a vacation to let them rest and have some fun because I think he knew,” Rena said.

Gordon was an organ donor, but those wishes could not be granted because of his COVID diagnosis.

Gordon had a special bond with his niece and nephews, his family said. When Rena’s daughter, Rozy Warlick, was born, he stayed in the hospital with her all night.

On Friday, Rozy, 8, walked over to her mother and grandmother on the couch and climbed up onto her mother’s lap.

“When I went to the funeral and I saw Uncle Gordy, I was crying and I felt sad that I don’t get to see him anymore,” she said.

Gordon took Rozy to her first father-daughter dance when she was 5 years old, Carolyn said.

“He was there when she was born,” Carolyn said. “He loves her.”

After the funeral service, Rena and some of Gordon’s friends went to his grave site, sharing a few beers as they told stories about him.

“Most of the stories I could tell probably aren’t newspaper appropriate,” Rena said, laughing.

Carolyn said she was overwhelmed by the memories his friends shared of him.

“I didn’t know, I didn’t realize that my son impacted so many people’s lives,” she said.

“It was always the song that my brother would ask him to sing at karaoke,” Rena said.

Gordon lived in Longview with a roommate who also became sick with COVID-19, Carolyn said. Randy Carlson, 65, who also was a friend of Carolyn’s, died from virus-related complications a week after Gordon.

Carolyn and Rena said families who are dealing with a family member sick with COVID should pray.

“Keep your faith that they’re going to pull through,” Carolyn said. “If you don’t, that negativity will eat you up.”