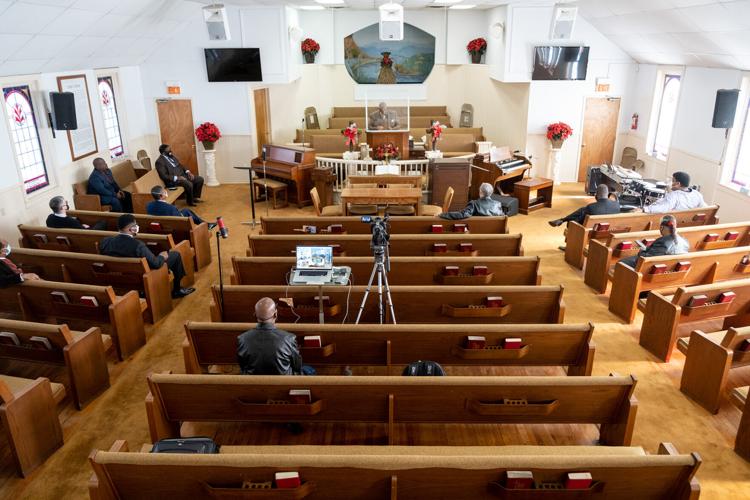 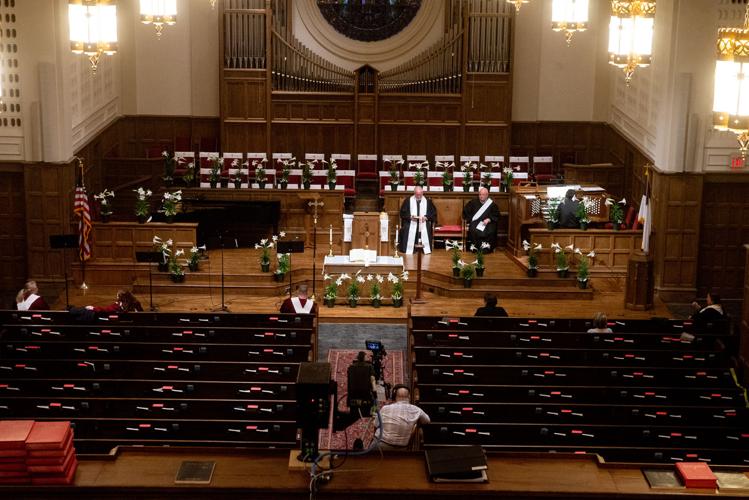 Pastor Jay Jackson prepares to preach to an empty chapel April 12, 2020, during the First United Methodist Church’s Easter Sunday service. Jackson is accompanied by a small team including choir members, an organist, associate pastors, children's director and an audio video crew to broadcast the service. 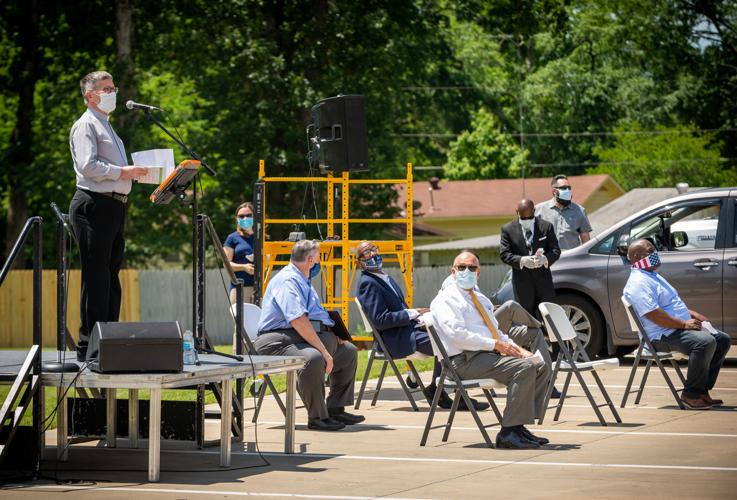 Pastor Jeff Borgwardt speaks May 7, 2020, at the Longview Clergy Coalition's National Day of Prayer drive-in-style event in the parking lot at LifeBridge Christian Center in Longview. 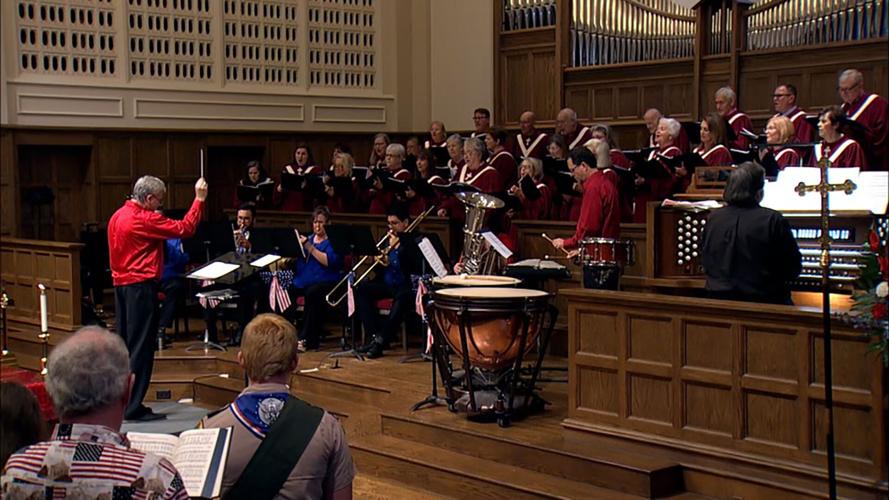 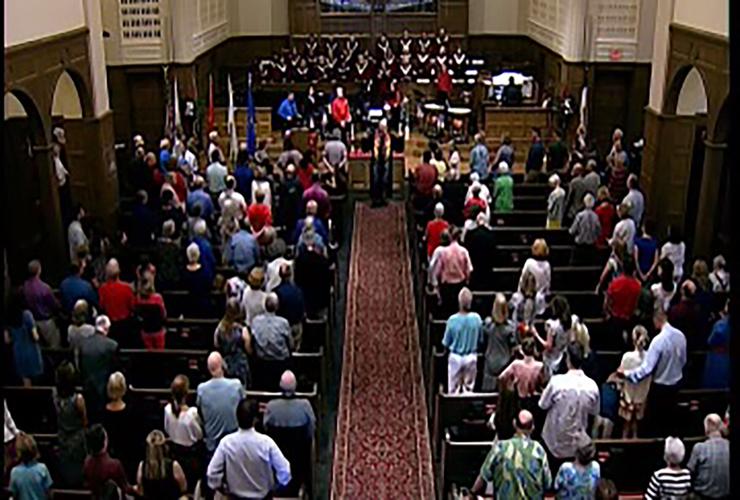 A "God and Country" worship service was held June 26 at First United Methodist Church in Longview.

Pastor Jay Jackson prepares to preach to an empty chapel April 12, 2020, during the First United Methodist Church’s Easter Sunday service. Jackson is accompanied by a small team including choir members, an organist, associate pastors, children's director and an audio video crew to broadcast the service.

Pastor Jeff Borgwardt speaks May 7, 2020, at the Longview Clergy Coalition's National Day of Prayer drive-in-style event in the parking lot at LifeBridge Christian Center in Longview.

A "God and Country" worship service was held June 26 at First United Methodist Church in Longview.

When the COVID-19 pandemic hit two years ago, churches scrambled to find different ways to reach not only their own congregations but also the community.

And after shelter-at-home orders forced congregations out of the sanctuary, church leaders turned to livestreaming for their worship services.

The Rev. Jay Jackson, senior pastor at First United Methodist Church, said his church changed the way it held its services early on.

“When things got really bad quickly in the first phase of the COVID spread and hospitalizations were way up … we stopped having in-person worship services,” Jackson said. “With our TV ministry and our livestream capability, we went to a completely virtual church for about three, maybe four months. We were able to maintain that and expand the reach we had through our livestreaming capability on Facebook and YouTube and other streaming services to be able to connect people virtually."

At Mount Olive Missionary Baptist Church, the Rev. J.D. Palmer said they were in compliance with the mandatory shelter-at-home order issued by the county judge at the time.

“During that time, me and my staff still broadcast morning worship at the church on Facebook live and we had a couple of telephone lines where people could call in to listen to the broadcast if they weren’t able to get on Facebook live,” he said. “And I did Bible study at home on Facebook live.”

Before the pandemic and the shelter-at-home order, Palmer said they were already livestreaming to some degree.

“But we did have to purchase a few items so we could have better quality livestream and make sure everybody who wanted to tune in could tune in either by Facebook live or telephone,” he said. So there was a little expense involved but not that much."

A sense of normalcy

With things seemingly returning to a sense of normalcy, worship services have slowly returned to the sanctuary.

“When we decided to try to come back, we came back with masking and limited attendance in our faith center,” Jackson said. “We had masking, we had hand sanitization stations, we had social distancing enforced and we didn’t pass the plate.”

Instead of a collection plate, Jackson said a basket was put in place where congregants could leave their offering.

“So, we went to a very restricted process and as we came out of that, then we moved back into our sanctuary in the fall as well as in the faith center. We roped off certain areas so that people could only sit every other row … and we didn’t use hymnals,” Jackson said. “We basically put words to the songs that we used – the hymns – in the bulletin. We had the bulletins available … we just allowed people to pick them up as they came in.”

Palmer said once the stay-at-home mandate was lifted, the sanctuary was open again for services.

“We invited those who wanted to return to the sanctuary on Sunday mornings to do so but we continued … Facebook live,” he said. “In fact, as of today, we’re still doing Facebook live in addition to … the sanctuary. We also livestream Bible study on Wednesday night and we had one business meeting where members could tune in and be a part of that.”

Jackson said social distancing is no longer required at the church.

“We do still have the hand sanitization stations and we’re worshipping in three different worship services, which give people different opportunities to worship at different times and different settings,” he said. “We have very few people masking now, usually people with health concerns. It’s definitely close to what I would say was how we were operating before.”

“Our attendance numbers are not what they were two years ago but I haven’t seen the livestream used as an excuse not to come in person,” he said.

Palmer said about one third of Mount Olive’s congregation is back in the sanctuary.

“Before the pandemic we were right at 120 but now we’re probably running about 35 or 40,” he said. “The rest are still on Facebook live. People have gotten comfortable watching on Facebook live … they don’t have to get up and get dressed and leave the house.”

Palmer said although he would prefer to have members back in the sanctuary, he's not pushing them to come back.

“But I told my staff we’re continuing with Facebook live because at least they are listening, so we’ll keep doing that,” he said. “In addition to that, we have people tuning in who are no longer living in Longview or in Texas. And people as far away as Alaska tune in and talk about how they were blessed by the service and by the Bible study.”

Jackson said attendance at First United Methodist is slowly getting back to normal.

“We’re not back at the same levels we were pre-COVID but we’re probably back to three quarters to maybe 80% of previous attendance or maybe a little better than that,” he said. “And at the same time, at Christmas and Easter, our attendance was at normal levels. So still when there are high holidays, attendance has been pretty close to where it was previous to that.”

Jackson attributes the decrease in attendance to two things.

“As a whole, I think two things are happening. Some people got used to virtually worshipping and some people who were isolated at home for two years have been traveling more,” he said. “That has definitely had an impact on worship attendance.”

Palmer said the changes brought on by COVID-19 have been mostly positive.

“In some ways, the changes made are positive because we’re reaching more people on Facebook live than we were reaching before just in the sanctuary,” he said. “We still have members who say we’re coming back, so I told them to pray about it. I want everyone to be led by their own mind because I cannot guarantee them that they will not catch COVID.”

Borgwardt said livestreamed services work well for those who are out of town or just unable to attend church.

“The other thing is our homebound folks are able to be engaged and feel like they are coming to church by hooking in with the livestream,” he said. “Overall, it’s going well and it’s an opportunity for people who maybe are not members of the church to kind of check things out on their own time and then when they do show up they get connected better.”

“We’ve also found for special services, like a funeral, it allows families who might be living in other parts of the country and unable to travel for a funeral service to connect and be a part of it,” Borgwardt said.

The changes brought on by the COVID-19 pandemic have been a wake-up call, Palmer said.

“I think it made us wake up and realize that we need to take advantage of all the modern technology we can to get the word out,” he said. “You never know who may be blessed and who may be convinced and convicted and come to Christ through those services. So were doing everything we can to make sure we get it out so that everybody who wants to tune in can tune in.”

I began my role as features editor in March 2020, right in the middle of the COVID-19 pandemic. This is my second stint at the News-Journal. A Louisiana native, I also was in the Leadership Longview class of 2000.