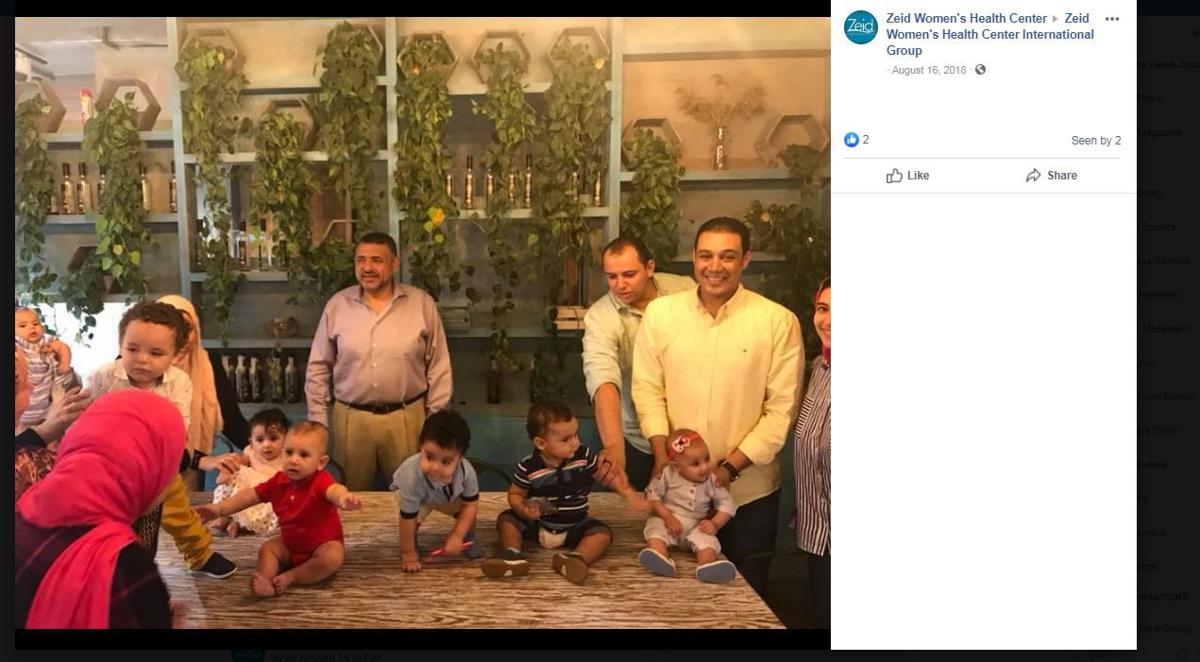 Dr. Yasser Zeid, center, is seen with babies he delivered of women from Egypt. Zeid operates a “Travel for Care” program at his Zeid Women’s Health Center in Longview. 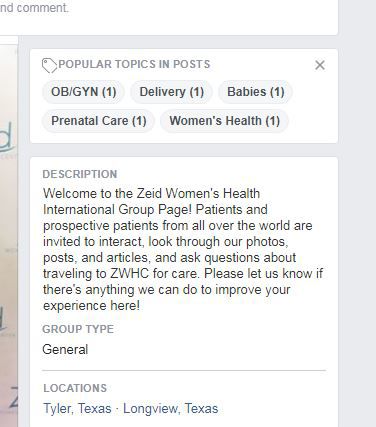 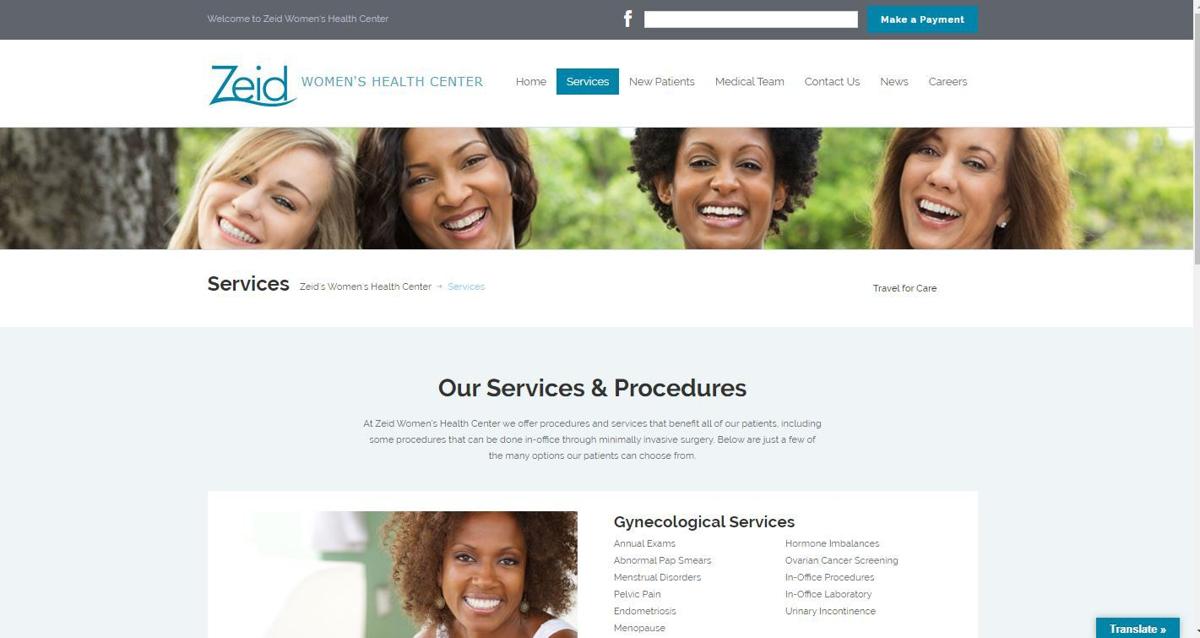 The link to the Travel for Care program is in the upper right corner. 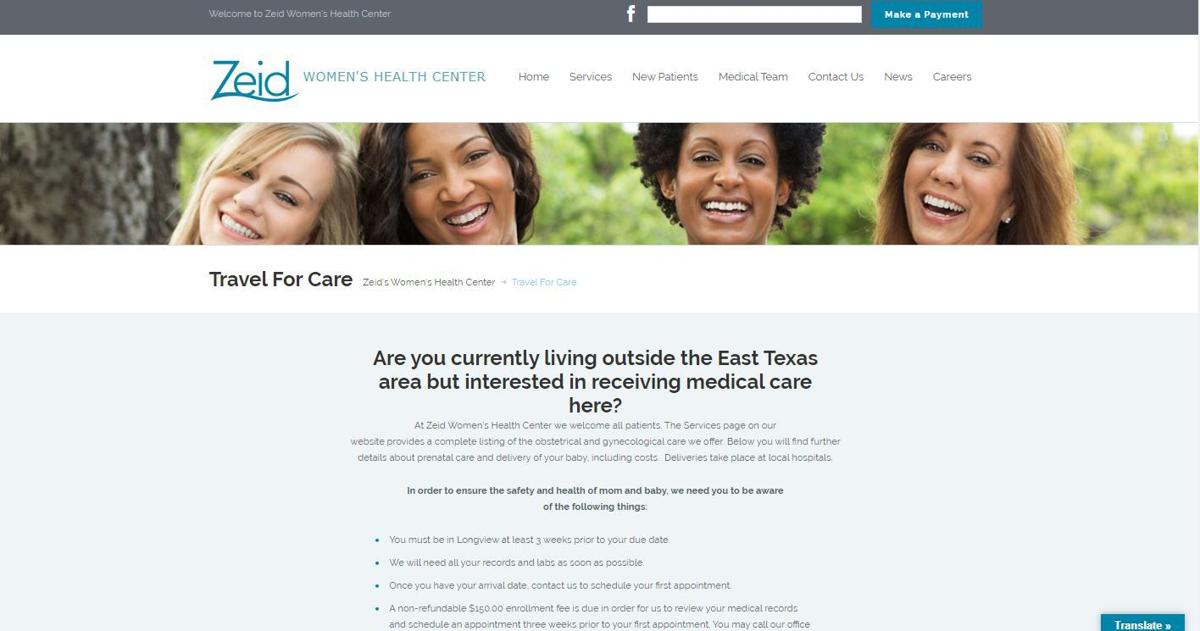 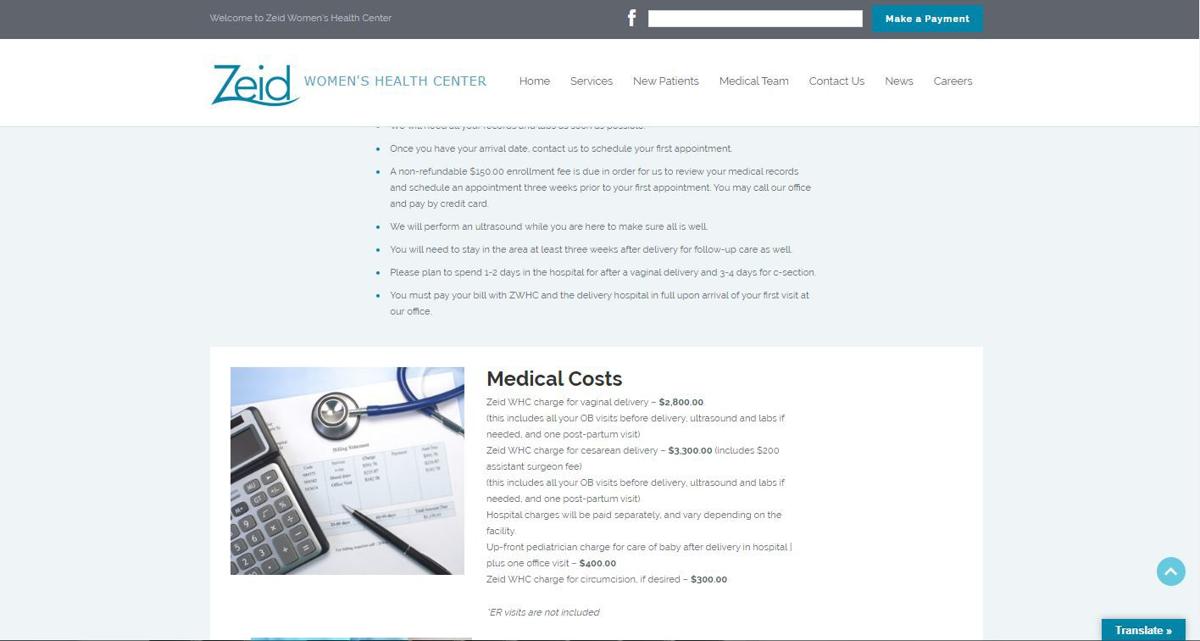 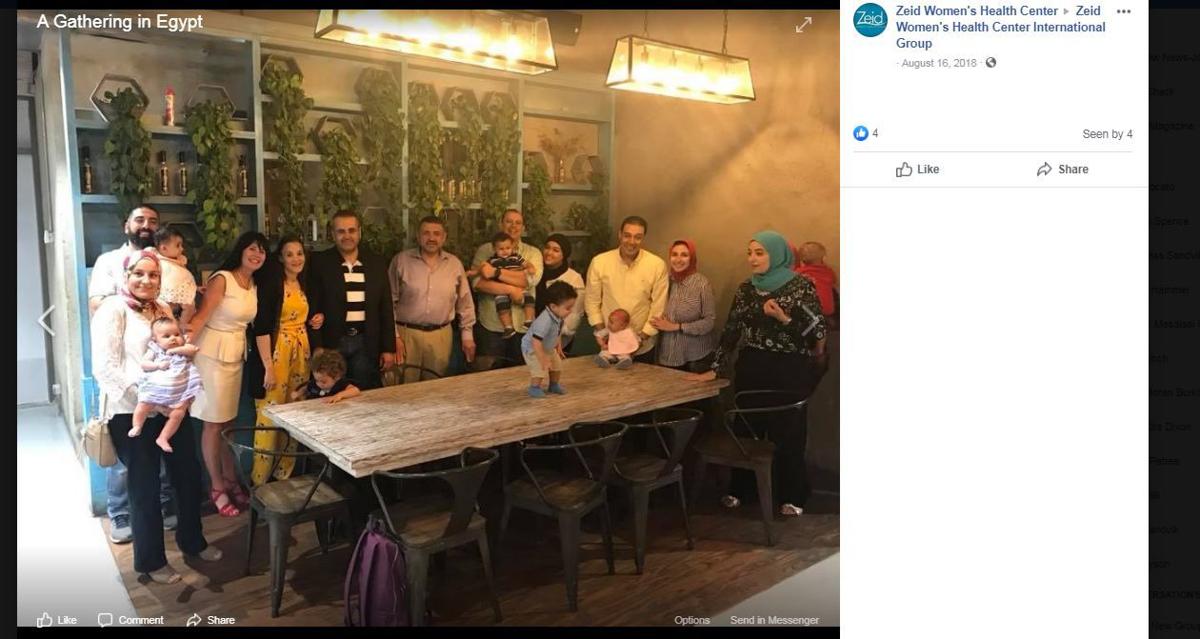 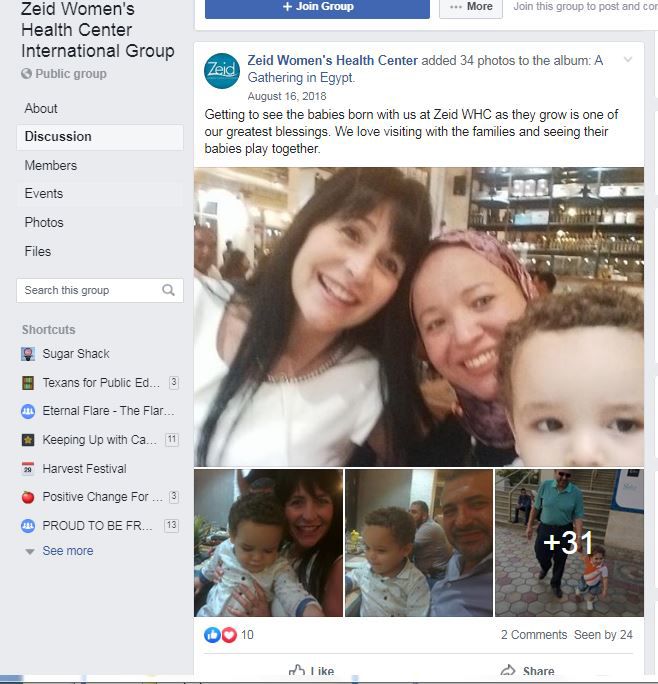 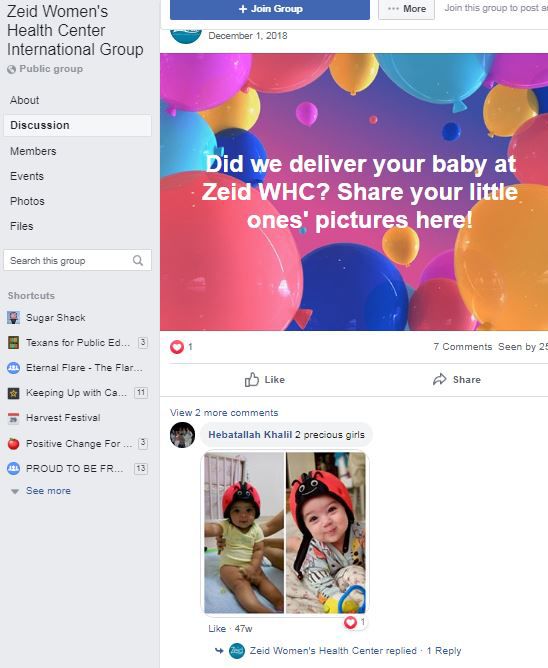 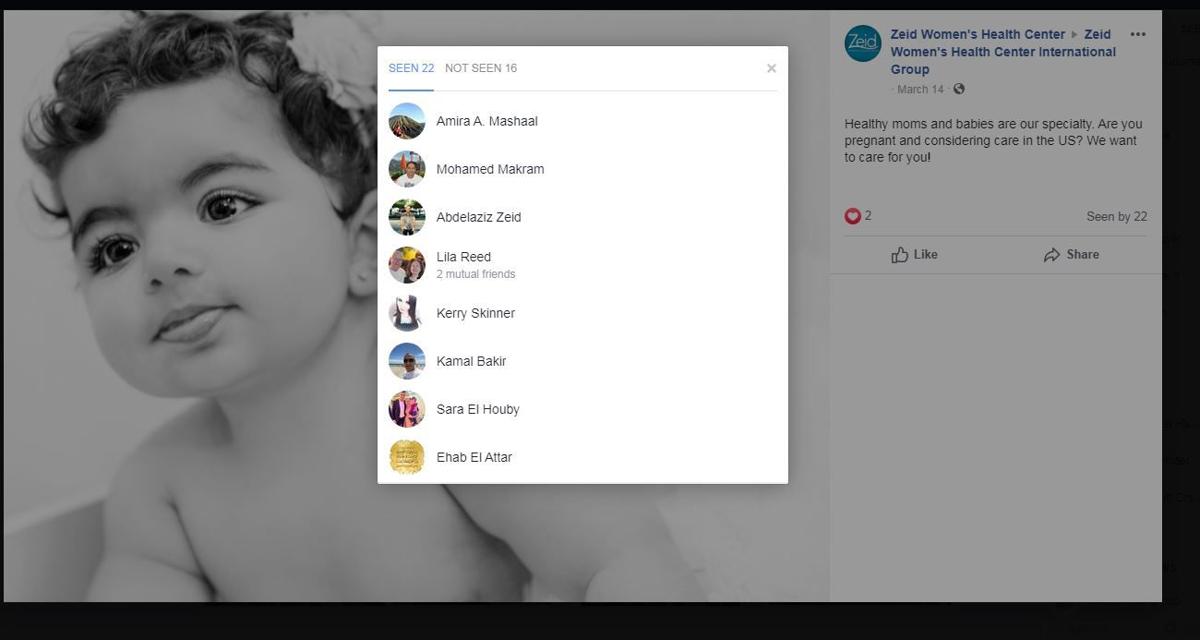 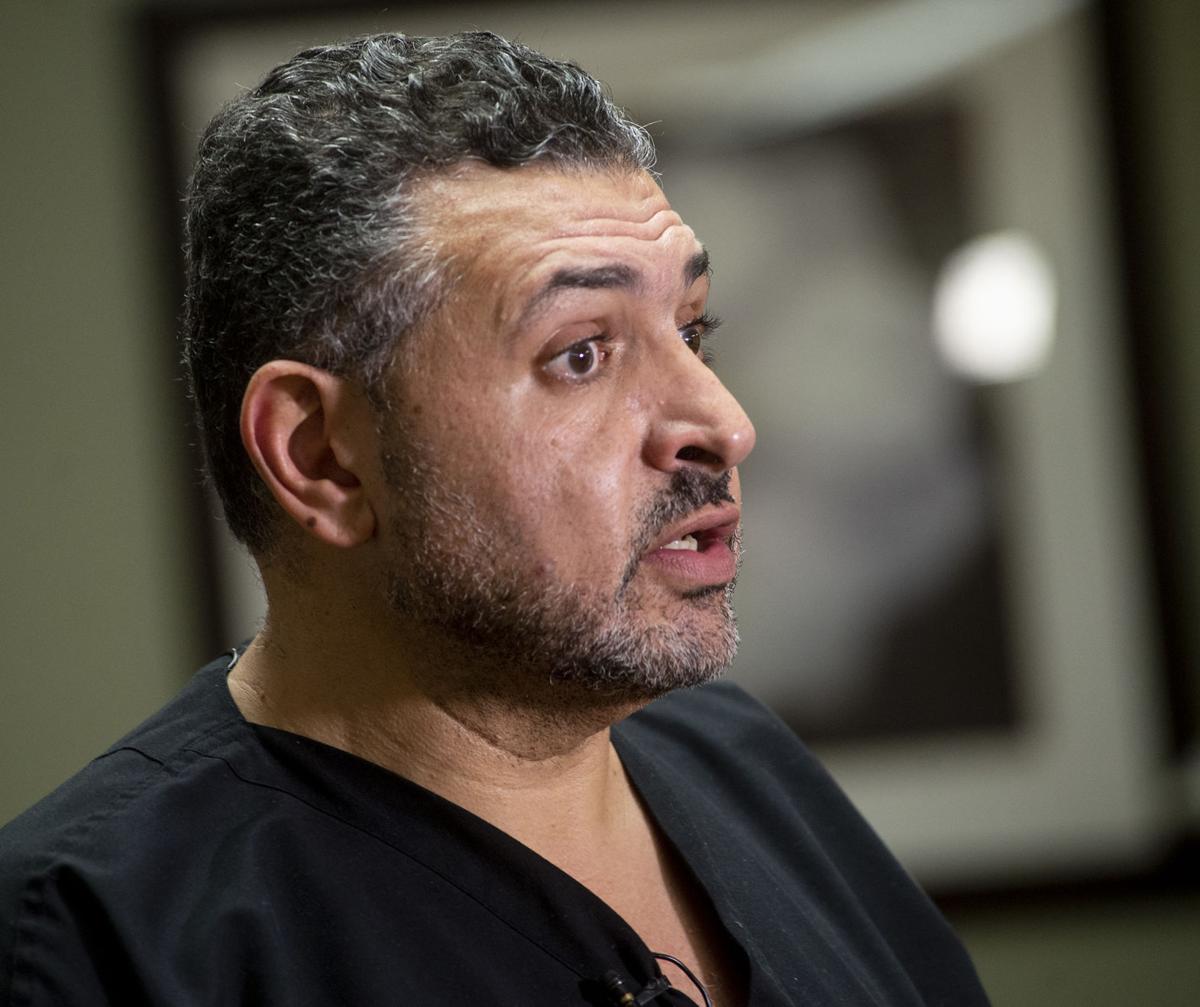 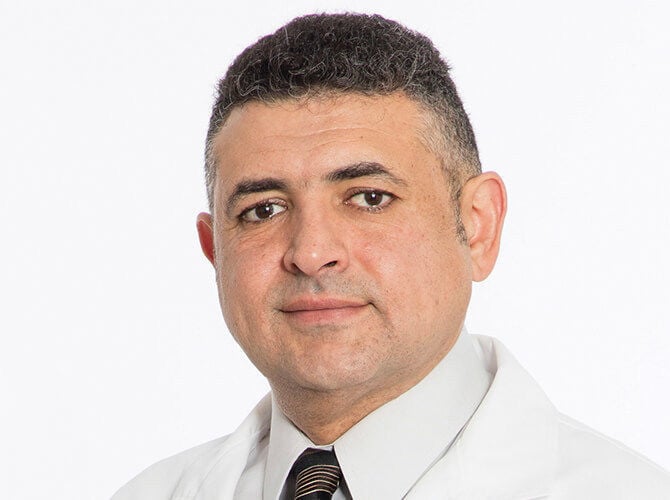 Dr. Yasser Zeid, center, is seen with babies he delivered of women from Egypt. Zeid operates a “Travel for Care” program at his Zeid Women’s Health Center in Longview.

The link to the Travel for Care program is in the upper right corner.

In a group of photos posted on Facebook in August 2018, Longview’s Dr. Yasser Zeid posed with a handful of busy babies.

The children had all been placed on a large, wooden table, with mothers and fathers standing close — some of them holding babies upright if they were too young to sit by themselves and others with hands out as toddlers moved and tried to walk on the table. Zeid, an obstetrician/gynecologist who owns Zeid Women’s Health Center in Longview, was in the background.

The photo is in a collection titled “A Gathering in Egypt” found on the Zeid Women’s Health Center International Group Facebook page.

“Getting to see the babies born with us at Zeid WHC as they grow is one of our greatest blessings. We love visiting with the families and seeing their babies play together,” a description with the photo album says.

A few months later, the same Facebook page featured a large, unidentified sculpture of the world, with the caption, “No matter where in the WORLD you live, we can care for you,” with a link to a web page that describes Zeid’s “Travel for Care” program. There, expectant parents find out about how long they would likely need to stay in Longview for a delivery, the doctor’s fees, how to get their child’s birth certificate, suggestions for where they might stay while in Longview and referral to a website explaining how to get their child’s passport.

Under the 14th Amendment of the Constitution, those children are then U.S. citizens, who can leave the country with passports and the ability to return later. The United States is one of 33 countries with unconditional birthright citizenship, according to a 2018 Library of Congress report.

Taken simply at face value, traveling to the United States to give birth isn’t illegal, said Greg Nevano, assistant director of the investigations division of the Department of Homeland Security. It’s a matter of following requirements for applying for a visa to travel to the United States, but Nevano and others still have concerns about what is known as “birth tourism.”

Zeid’s Travel for Care program became a topic of online discussions when the News-Journal published stories this year about a legal dispute that now has been settled between Zeid and a group of nurse practitioners and midwives who previously worked for him.

In a phone interview this past week, Zeid said he began accepting international patients about six or seven years ago. He estimates he’s seen about 20 or 30 of those patients since then, and maybe one in the past six months, adding that they have come from such places as Egypt, The Netherlands and Saudi Arabia.

“This is not something that happens every day, all the time,” he said, noting that his practice, in general, delivers about 150 babies a month.

He also said patients come to him through word of mouth and through friends and family members, and his office doesn’t advertise the service. He said the patients are likely coming to the United States anyway, but they’re looking for someone who speaks their language. Zeid said he’s from Egypt and has been a naturalized U.S. citizen since 1999.

As Nevano described it, some of the ancillary issues around so-called “birth tourism” can land people in legal hot water, and the issue raises red flags for the Department of Homeland Security — concerns about the loyalties of the adults who might one day return to the United States as citizens after growing up in another country and about how to know if the person coming back years later actually is the person who was born here.

“The root of the problem, and we’re dealing with this right now, is working on changing the interpretation of how non-immigrant visas are issued,” Nevano said.

He said that in past years, interpretation of requirements for people to receive non-immigrant visas for business or tourism travel —which include a provision for travel for medical care — would have prevented many people from coming to the United States to give birth.

“Prior to around 2014-2015, if you were to attempt to come to the United States for the purpose of having a baby, most likely your visa would not be issued,” he said.

That interpretation of visa restrictions has been relaxed, though, he said. Now, a person can come to the United States to give birth so long as she is honest about why she’s coming here.

Nevano said his agency has noticed in particular trend in Chinese and Russian nationals exploiting the medical provisions to come to the United States to have babies, usually in specific areas of the country. While it might be possible to obtain a visa to give birth here, there are still crimes associated with the practice that Nevano’s agency can investigate.

Earlier this year, for instance, a Chinese national in California pleaded guilty to charges related to “running a ... ‘birth tourism’ business that catered to wealthy pregnant clients and Chinese government officials, charging them tens of thousands of dollars to help them give birth in the United States so their children would get U.S. citizenship,” a press release from the agency says. The charges were for conspiracy to commit immigration fraud and visa fraud.

Zeid said his office “insists” on not being involved in his international patients’ visa applications.

“They have to be able to enter the country on their own,” he said. “We do not assist in any way, shape or form.”

He said his practice provides information to the patients about the costs of giving birth here and requires that they pay those costs upfront and not apply for government assistance.

“We don’t really have any relationships with anybody to make it easy,” he said, with his office providing a list of hotels for the patients to connect with on their own.

“It is a boost for the local economy,” Zeid added, because the patients stay in town, buy food here and pay their bills.

“The good news is that, first of all, those patients have to be very well to do to be able to come to the United States and pay all their bills upfront like that,” he said.

The patients, he said, are seeking better quality of care than they could receive in their home countries, noting for instance, the availability of neonatal intensive care units here that offer higher levels of care than what he said can be found in Europe and the Middle East.

While Zeid said his patients pay their costs upfront, one study in another area of the country has documented the effects of complications that might surface for international patients.

Dr. Michel Mikhael is a pediatrician and neonatologist at Children’s Hospital of Orange County in California. He and other physicians there conducted a study of data from 2012 to 2015 at Children’s Hospital exploring the issue of birth tourism as it relates to NICU hospitalization. He said the study was a result of noticing, after he began working at the hospital eight years ago, that doctors and hospitals there had relationships with foreign citizens coming to the United States to give birth.

“The issue that came to my attention is when these children — most of the time the families have an arrangement for an uncomplicated hospital stay for baby and mom, but sometimes, about 10 percent of the time on average, a child might need more complex care,” he said. That leads to family stress and anxiety, financial difficulties and challenges setting up care for children being discharged to countries that might not have adequate services.

Mikhael said the localized study didn’t make any recommendations. The study’s authors, however, do believe a larger study needs to be done on the subject, he said.

The study identified 2,153 admissions to the California hospital’s Neonatal Intensive Care Unit during the study time period, with 46 babies identified as birth tourism children who accounted for 50 NICU admissions.

Zeid said he hasn’t seen these kinds of issues with his international patients and has declined patients whose care might result in a large hospital bill, out of concern the patient would not be able to pay it. He said he turned down a woman who was expecting triplets, for instance.

“To me, it’s kind of a surprise (that this is an issue). I guess I never thought it would be such a controversial issue,” Zeid said. “We’re all humans. We all want to be taken care of.

“When someone wants good care, we should be proud and happy to offer that to them,” instead of assuming they’re bad people, he said.

Nevano, with Homeland Security, said the issue of birth tourism presents several national security concerns. A family might leave the country after the baby’s birth, but when the child is 21, he or she can then petition for immediate relatives to come to the United States as lawful permanent residents, with no waiting period, and a short time period to apply for citizenship, he said.

The children also might grow up in countries with different ideologies than the United States. Those children, though, can return here as an adult and possibly get jobs working for the government, where they might have access to information they could provide to the country where they grew up. Also, he said there would be no proof the person returning to the United States is the child who was born here.

His agency is calling for tighter restrictions on non-immigrant visas, including not granting visas for multiple entries in a 10-year period — so foreign women don’t have multiple children in the U.S. — and providing more restrictions for visas granted for medical reasons.

“If an East Texas doctor is bringing people into the U.S. to give birth, then it is the same birthright tourism I have been sounding the alarm about for many years but could not get support to end it until President Trump came along,” Gohmert said in a statement provided by his office. “Speakers Boehner, Ryan and Pelosi have not been willing to take action to stop it. However, President Trump has now indicated he intends to end it.

“It is an abuse of our generous immigration laws, regardless of whether the person enticing the abuse is in East Texas or anywhere else. It is wrong. We need to close that loophole and end the abuse. I am glad some people are finally starting to take this abuse seriously.”