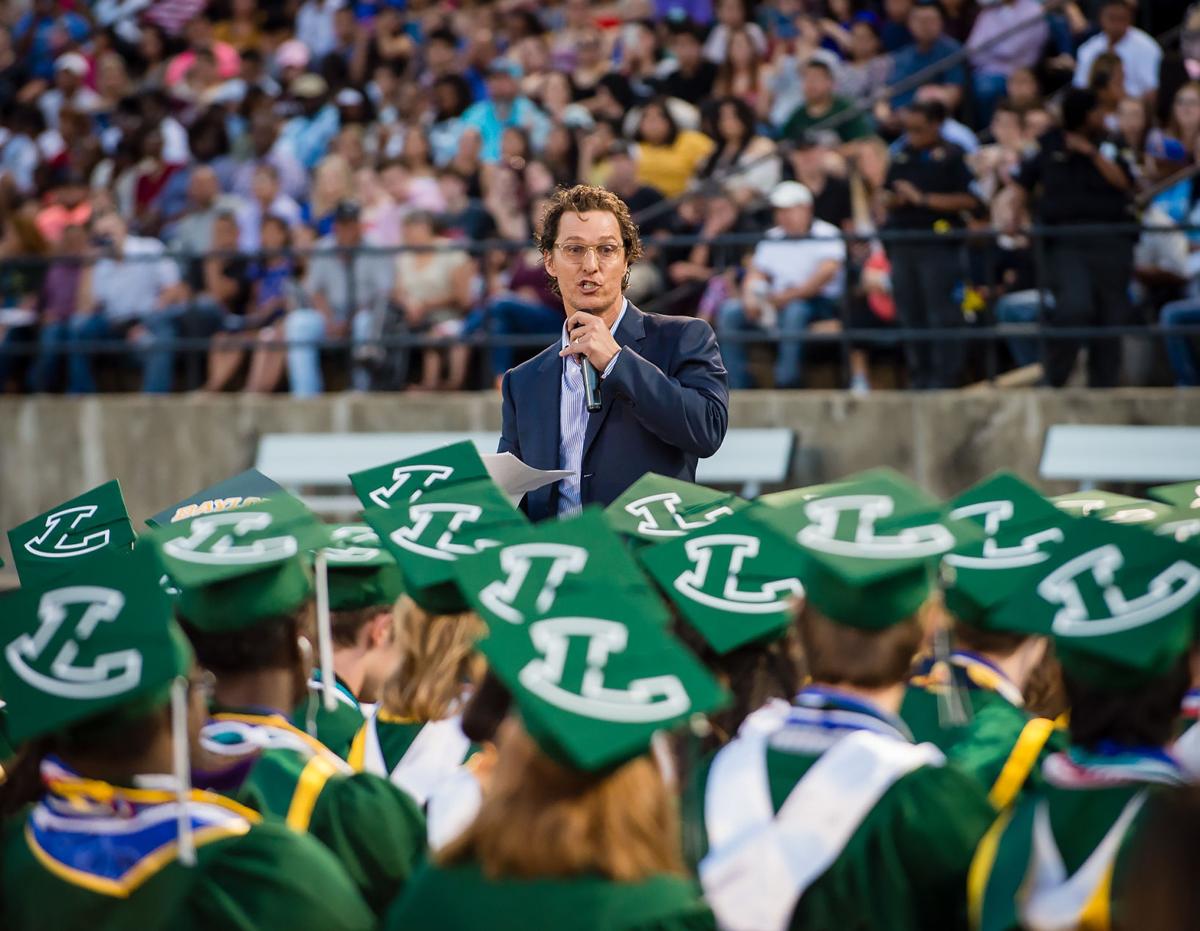 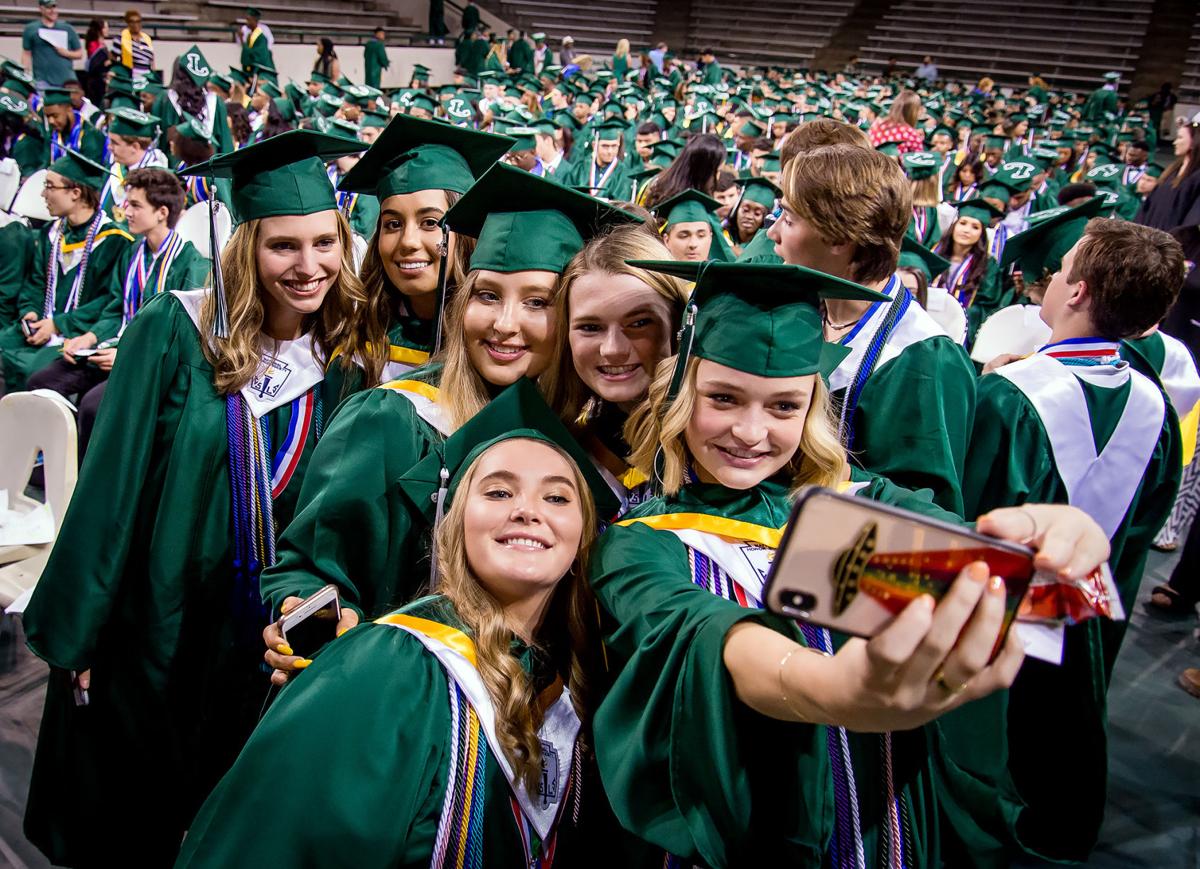 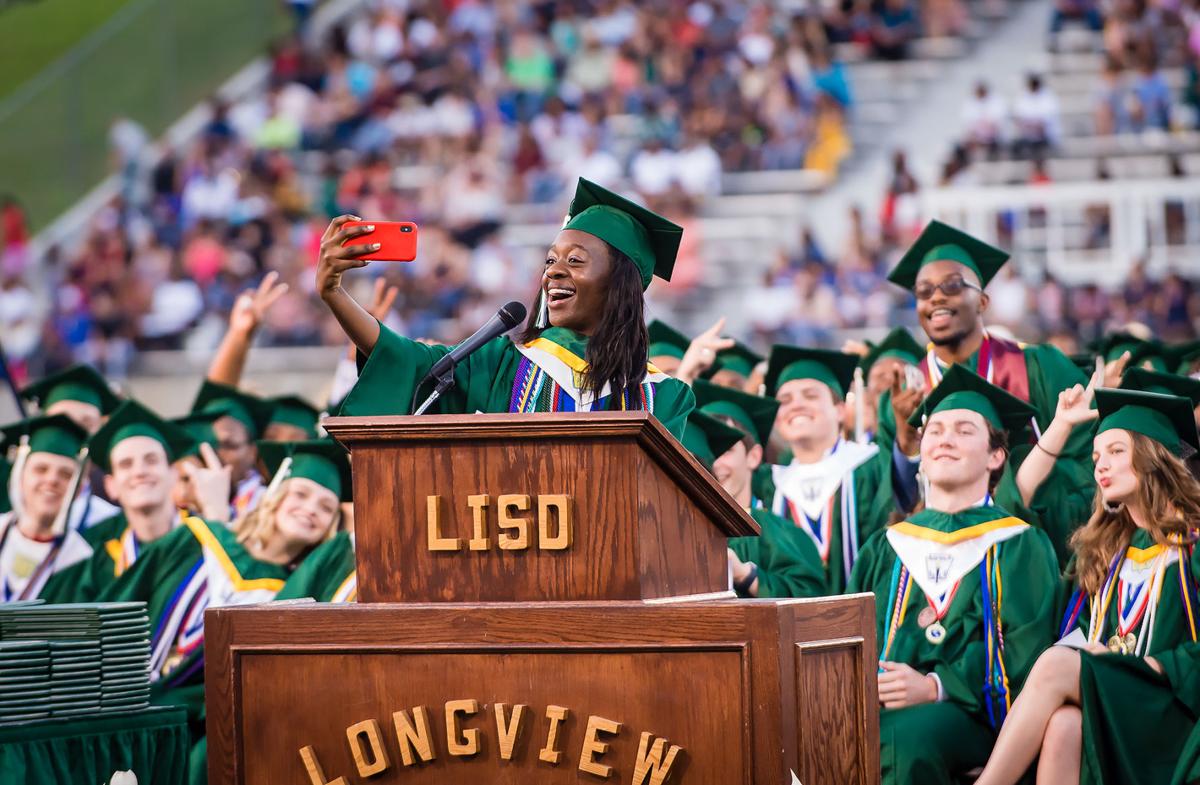 Salutatorian Ejehi Omoye Ihionkhan takes a selfie with her classmates after delivering her speech at Longview High School's graduation ceremony on Friday, May 17, 2019. (Les Hassell/News-Journal Photo) 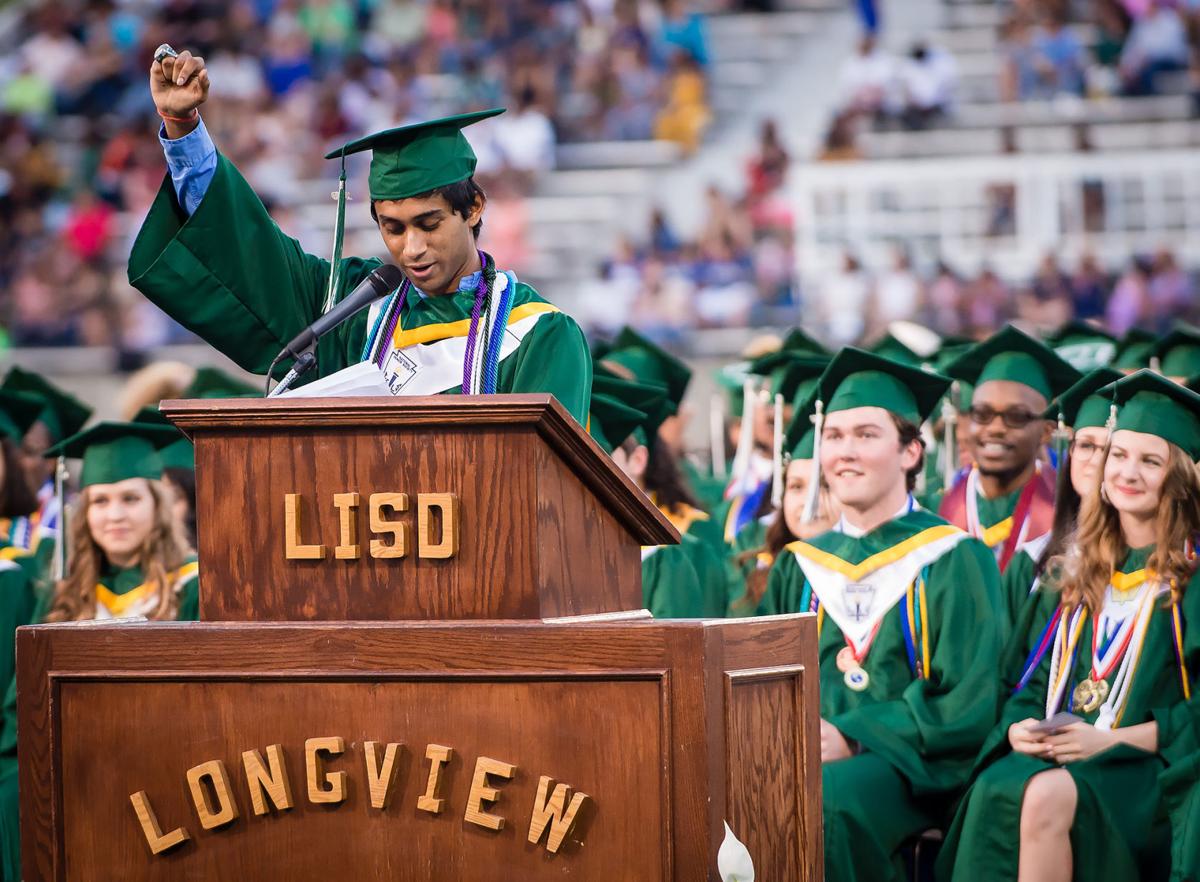 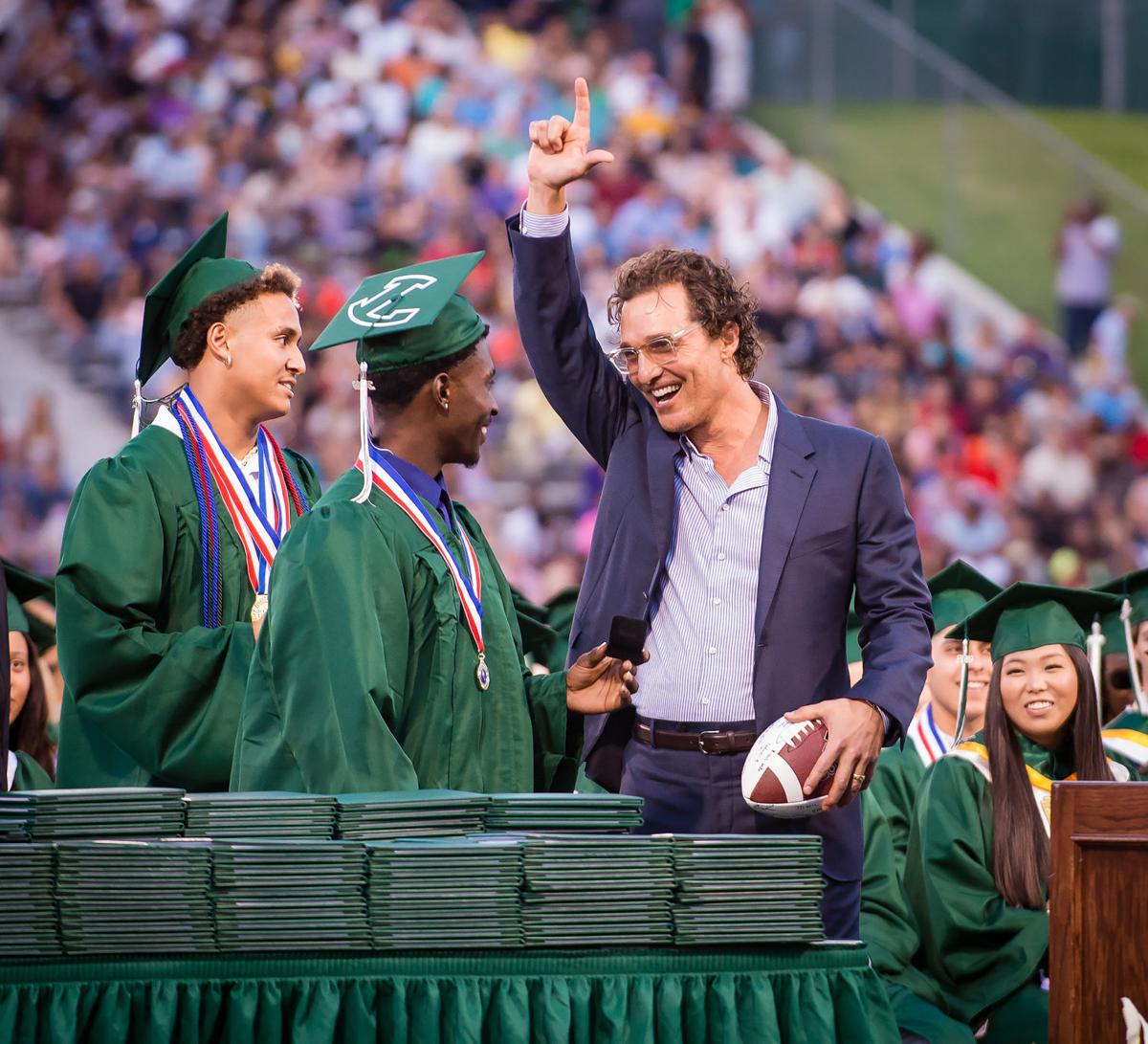 In this file photo by Les Hassell from 2019, Longview Lobos Kamden Perry, left, and Jephaniah Lister present actor Matthew McConaughey, Longview High School class of 1988, with an autographed football and his own state championship ring Friday night at Lobo Stadium during commencement. 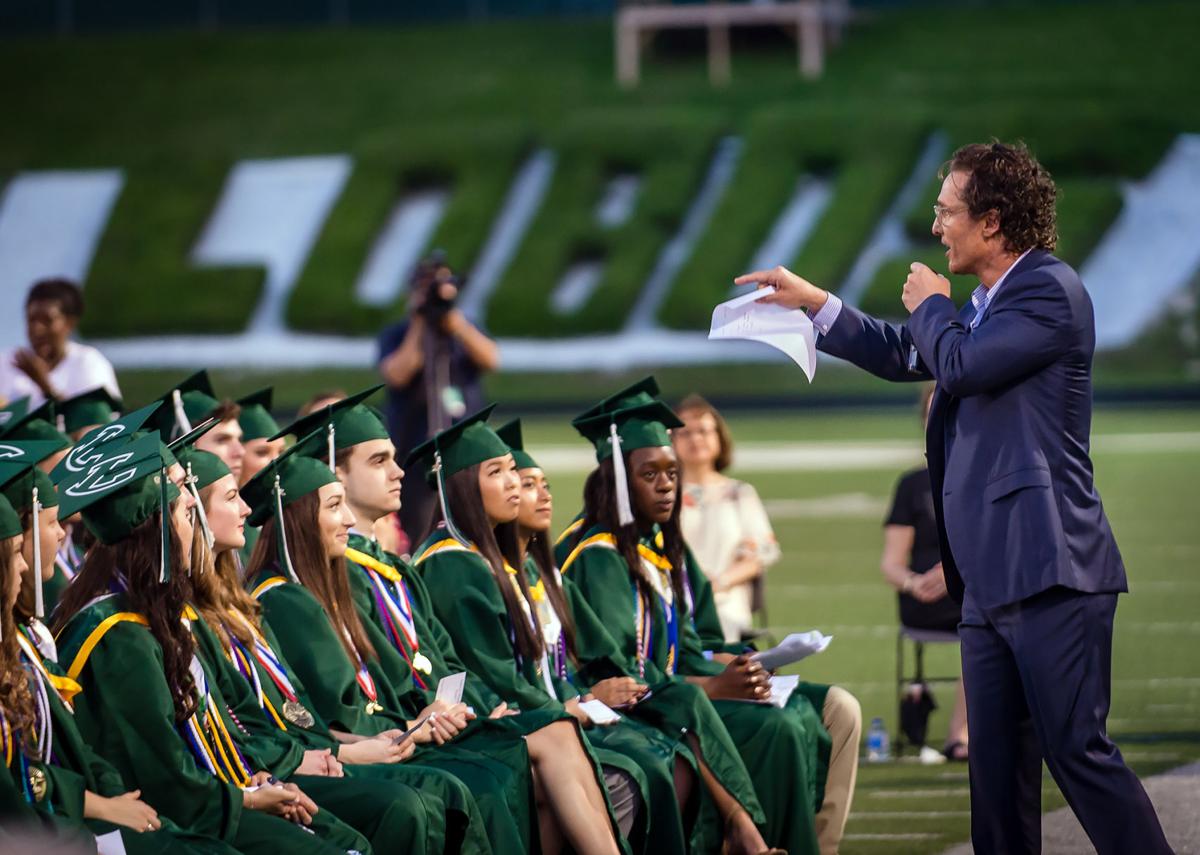 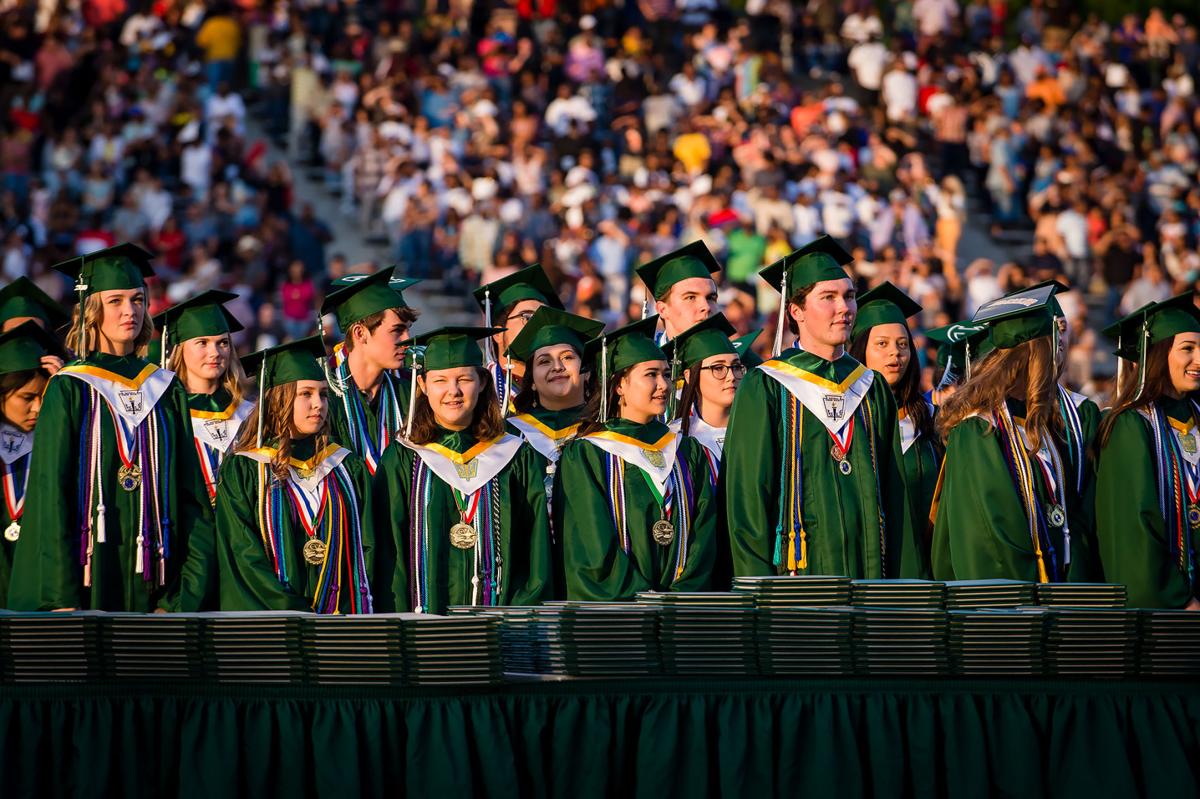 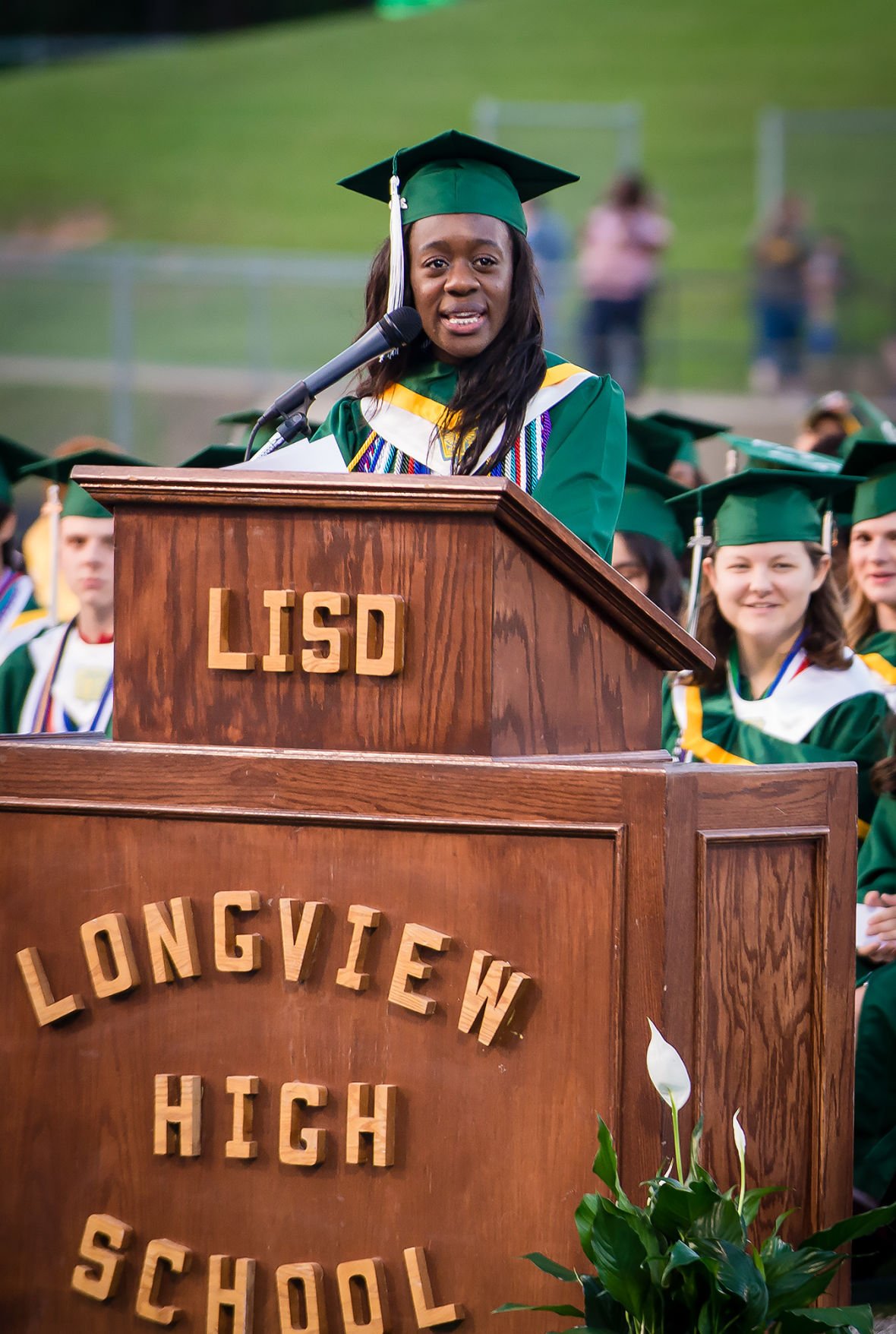 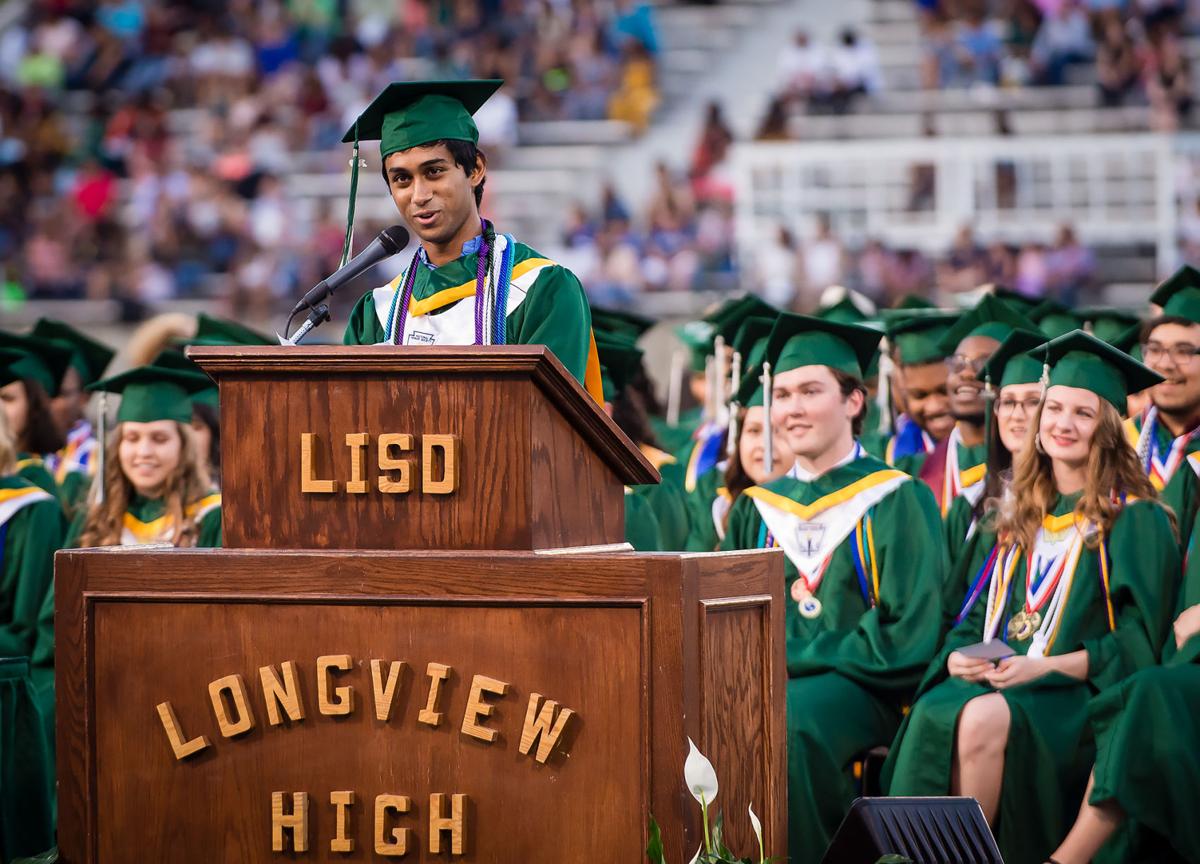 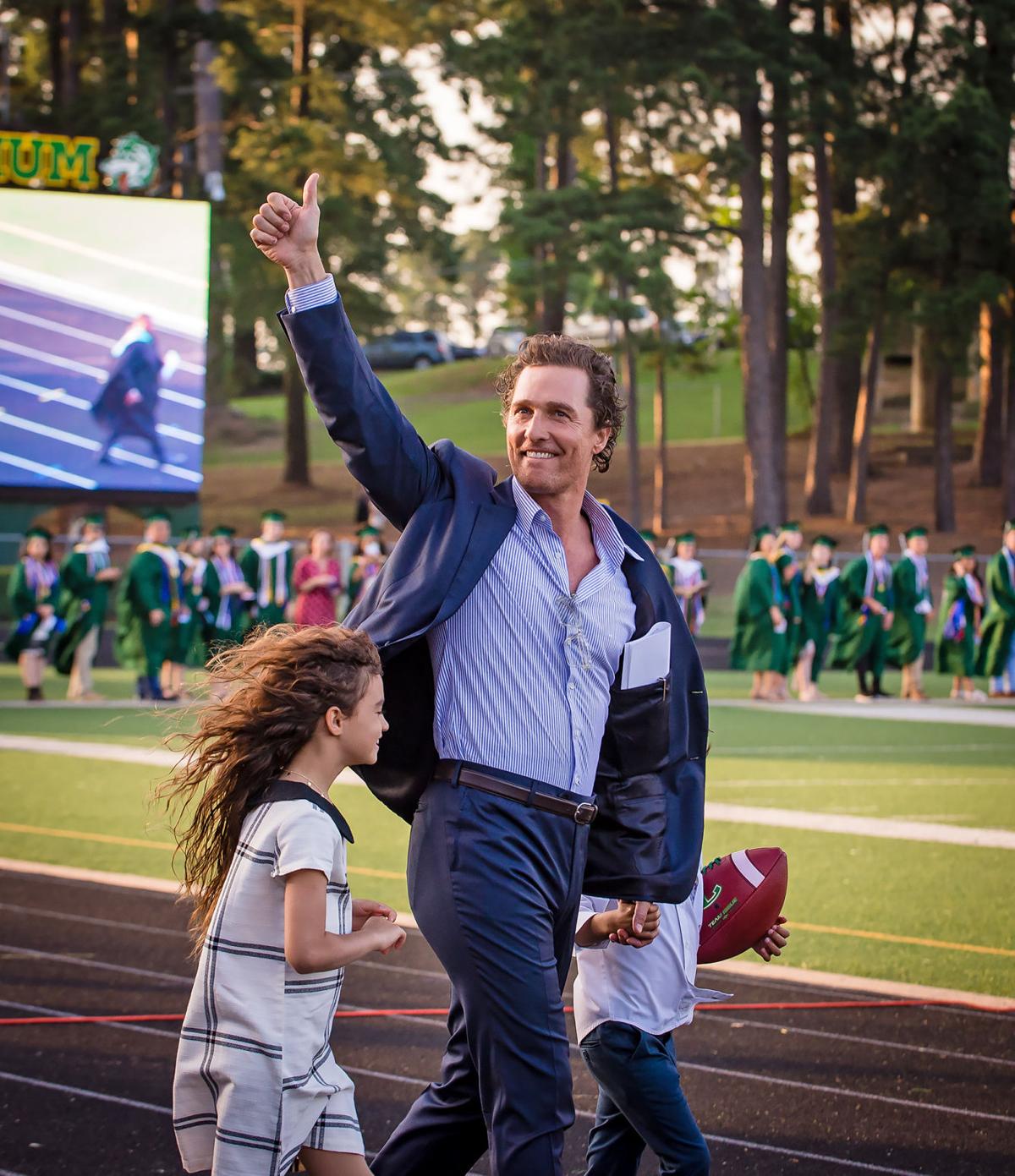 Salutatorian Ejehi Omoye Ihionkhan takes a selfie with her classmates after delivering her speech at Longview High School's graduation ceremony on Friday, May 17, 2019. (Les Hassell/News-Journal Photo)

In this file photo by Les Hassell from 2019, Longview Lobos Kamden Perry, left, and Jephaniah Lister present actor Matthew McConaughey, Longview High School class of 1988, with an autographed football and his own state championship ring Friday night at Lobo Stadium during commencement.

Matthew McConaughey, Academy Award-winning actor and Longview High class of 1988 alumnus, returned to speak to the class of 2019.

Longview graduated 581 students at Friday’s commencement. After being presented with a 2018 Class 6A state football championship ring, McConaughey said it was the students’ hearts that got them to graduation.

He used the police term “what’s your 20?” to tell students they have heart, and they’re exactly where they should be.

“Follow your heart, own your heart, make your heart your 20 at all times,” he said. “Like the recent tornado that swung through here, it attacked, it broke a few hearts, but you will heal. You will rebuild. Why? Because you’ve got your heart. It’s your 20.”

Interstate 20 brought McConaughey to East Texas from Austin, he said.

“I-20 brings you home,” he said. “So as you go from here tonight and wherever you go for the rest of your life, wherever you are, I want you to ask yourself this question from now on: ‘Man, what’s my 20?’ and know that it’s your heart.”

After his address, McConaughey was presented with a gift that his alma mater has had for 31 years — his original high school diploma.

“Proof,” he said after receiving it.

Longview ISD spokeswoman Elizabeth Ross later explained that because it’s customary for graduates to receive diploma holders and not their actual diplomas at commencement ceremonies, the diplomas must be picked up later. She said McConaughey never returned for his diploma.

Salutatorian Ejehi Ihionkhan also spoke about the heart of the class of 2019 and what the graduates celebrated at commencement: “The celebration of the failures that did not hold us back,” she said.

She said the class needed inspiration, motivation and drive to earn their diplomas.

“On the note of inspiration, I am happy to say that this class has no scarcity,” she said. “I personally have been inspired by this class, a class that pulls one another up and is only satisfied when every member is risen.”

Valedictorian Nitin Rangu said it was important to take time to let graduation sink in, and he reflected on the years the class spent together.

“We played in some big games; we found out we’re pretty good at those big games,” he said. “We took some hard classes, found out hard classes are easy with the internet.”

“I’m here because of you, for you,” he said. “Kevin Durant told his mom she’s the real MVP. I’m not good at basketball, so that will never happen, but you’re the real valedictorian to me.”