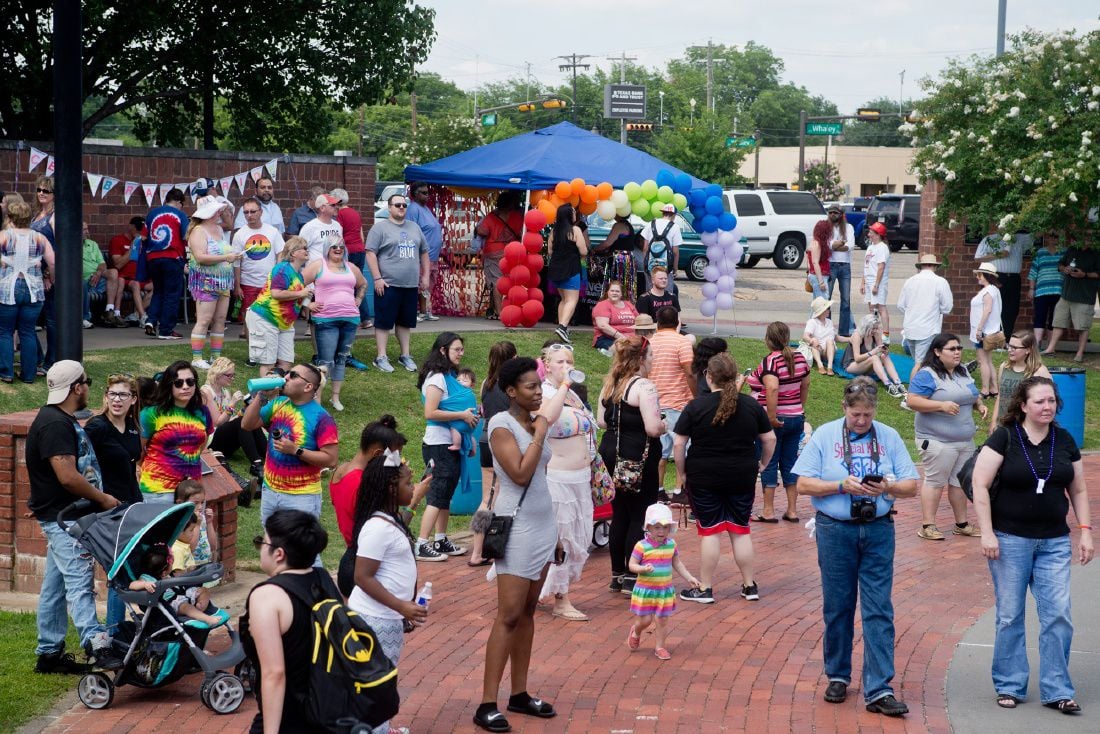 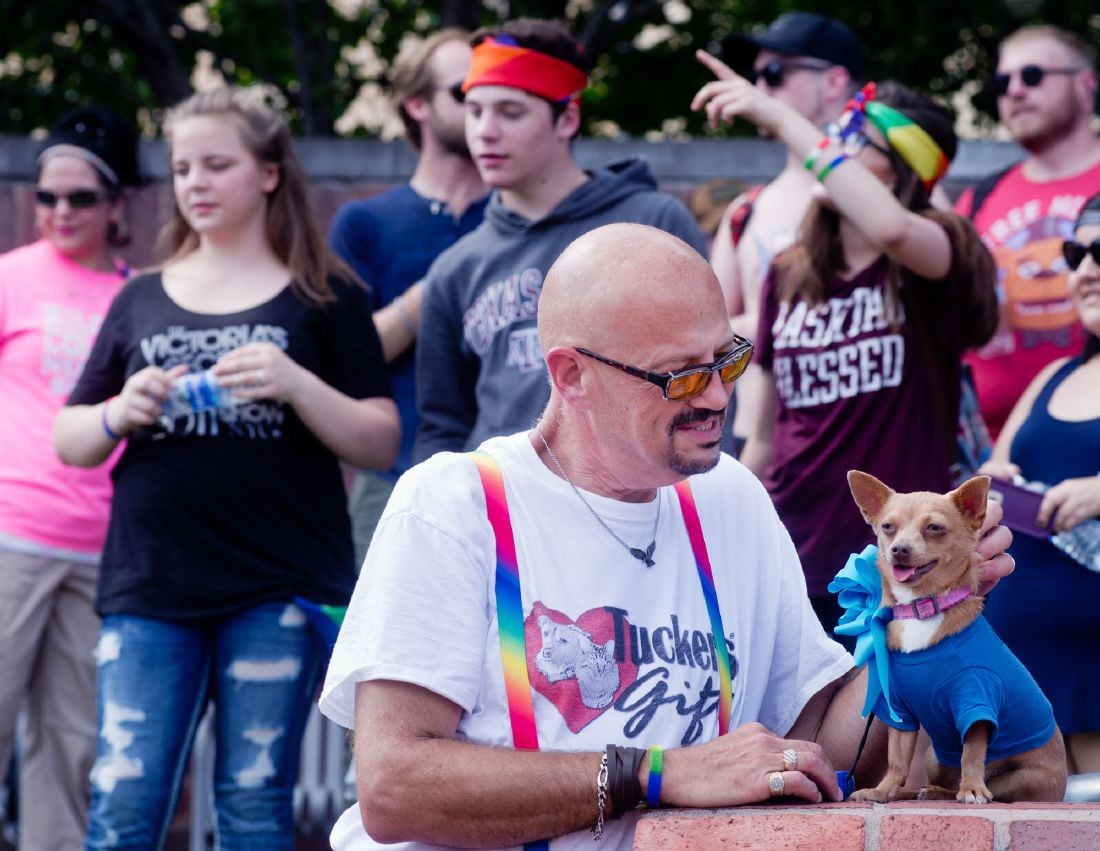 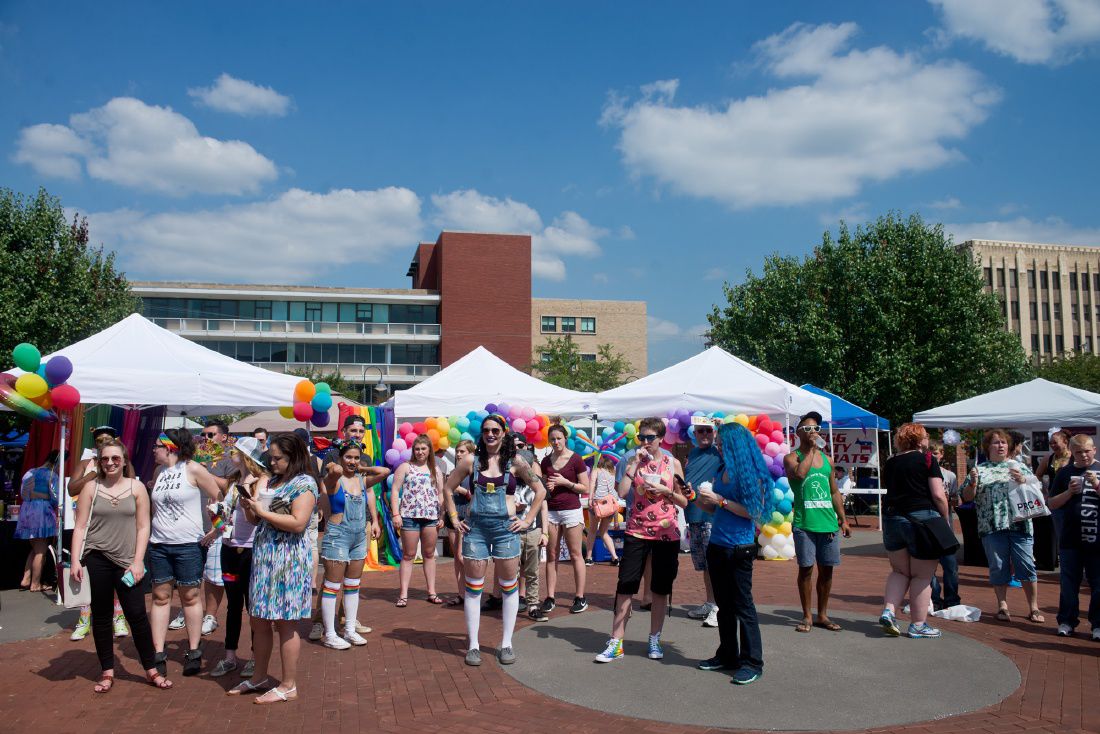 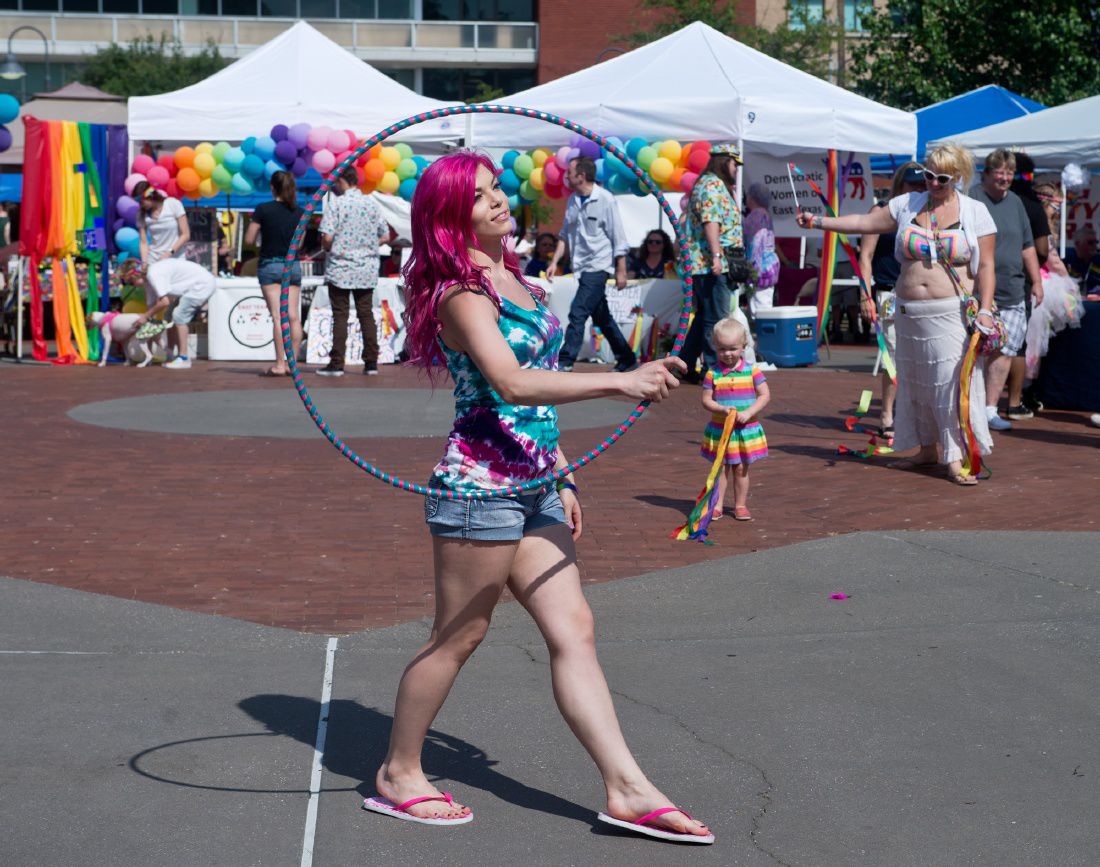 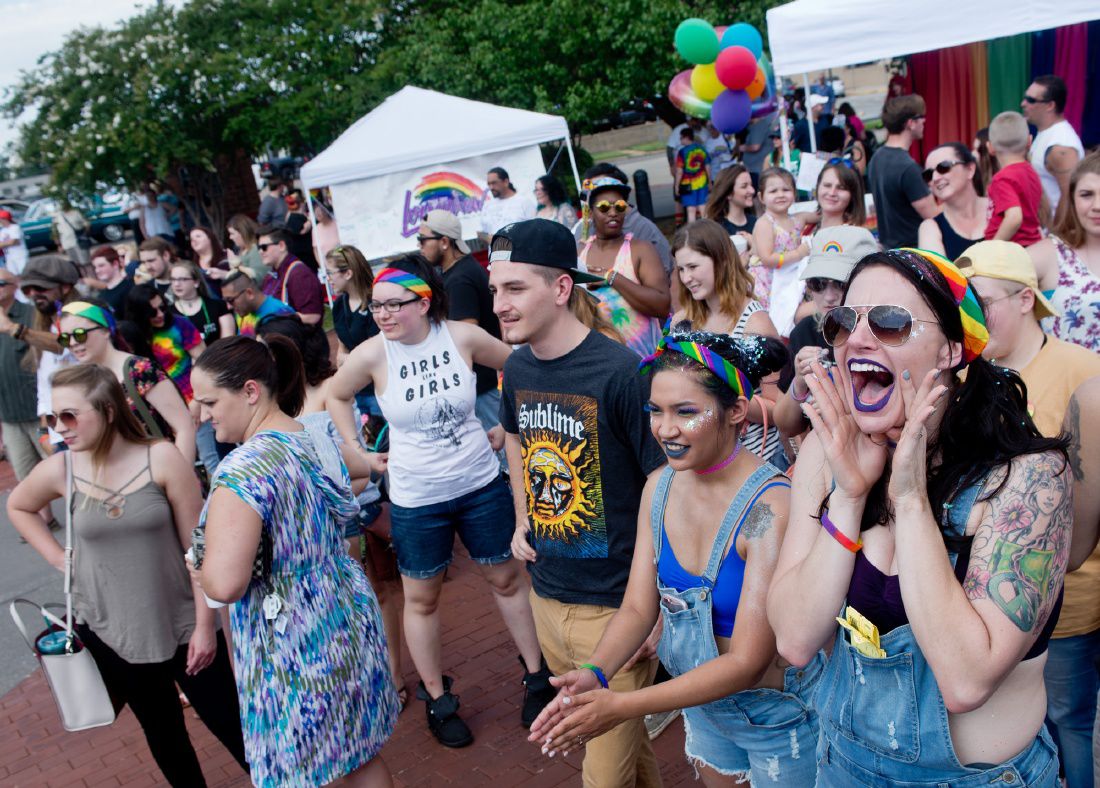 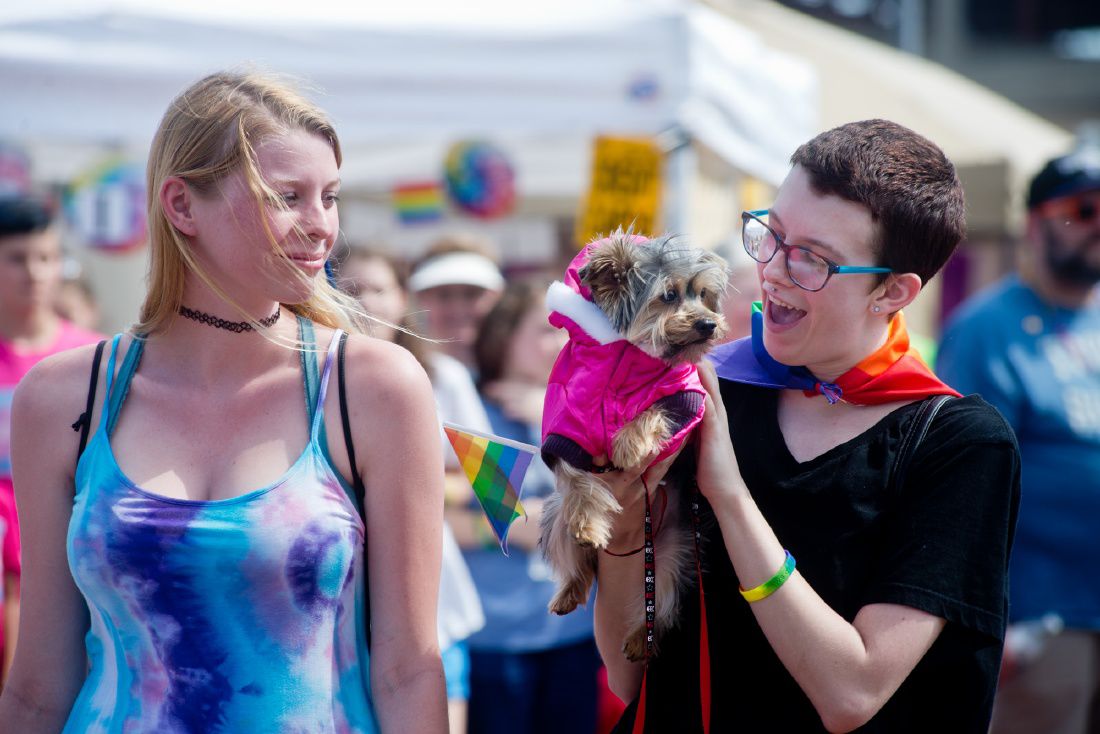 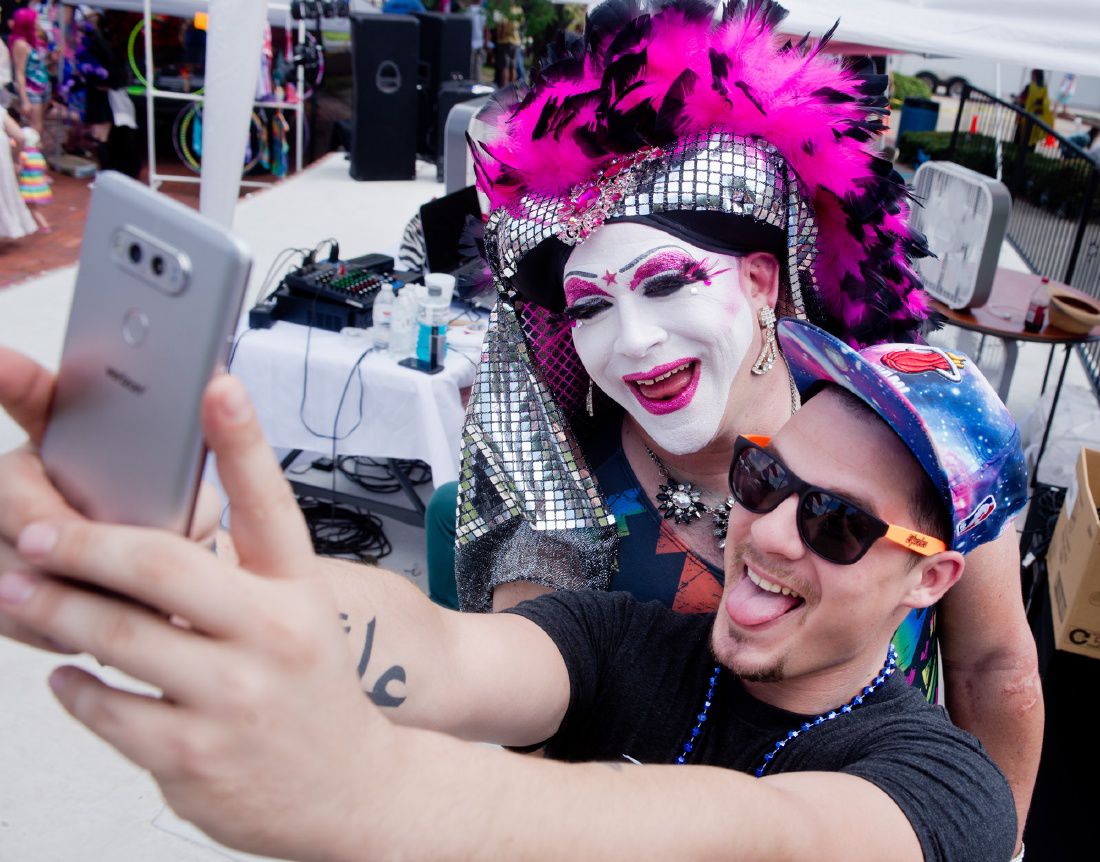 Patricia Watkins, the vendor and entertainment coordinator for the festival, said she expected more than 500 people to attend the event and was hopeful there might be 1,000 by the end of the day.

"We're anticipating as of right now that next year we will have to expand into the street," she said. "The volume of people that are saying they wanted to come has grown drastically.

"In past years, we've had attendance probably around 200 or 300. This year alone, we've already got about 1,000 on Facebook that said they were coming, and we anticipate probably close to half that being here, at least."

The LGBT Pride Festival is organized by Longview PFLAG. This year's theme was "Rainbow Over the View," and Watkins said several things have changed since the festival started in 2014.

"We've added probably about twice as many vendors this year and really reached out a lot of broader types of groups," she said. "We also switched it up a little bit this year and have different spot entertainment."

Watkins said in the past, the festival has had live music along with a drag show and doggy drag show, but this year, PFLAG decided to add other entertainment.

"We have hula hoopers, belly dancers and instead of live music, we have a DJ," Watkins said. "And then we've got the dance party afterwards, which should be fun."

Saturday was Sheila Murray's first time at the festival since she moved to Marshall from Corpus Christi.

She said it was good to see such strong support of the LGBT community in Longview.

"In Corpus Christi, they wont allow gay pride," Murray said. "So I think it's fun to go to these whenever you get the chance."

The Dallas Fort-Worth chapter of the Sisters of Perpetual Indulgence, a group of people who dress as nuns and say they are dedicated to community service, outreach and ministry, attended the event for the fourth year in a row. The group advocates for LGBT equality and promotes education awareness on topics such as safe sex, violence prevention and human rights.

"It's not always easy for a small community to have an event like this," Lations said. "Whenever you're talking about communities that are away from a major city, that's where you really have a lot of people who don't have access to certain resources or even somebody to talk to, so yeah, it's absolutely important. Because it's the genuine care that we have and we want to make sure that they know that exists."

Mariah Parnell, a 14-year-old from Tyler who recently came out as gay, said she was excited to be at the festival, since she doesn't often get the opportunity to be surrounded by a loving and supporting community.

"Though I did have a very open family, I didn't have any opportunities to be open in myself just because of fear of ... judgment," she said. "But I came out here to be me. And it's great to see everyone so happy. There's so many different kinds of people here being themselves without being scared of who they are."

Kendall Standifer, Parnell's best friend, came with her to the festival to provide support.

"My best friend is lesbian, and even though I'm straight, I think it's super awesome what they're doing here," Standifer said. "And I'm just super excited to support it, because I think everyone should be happy."

Standifer and Parnell said they hadn't been to an LGBT pride festival before, but it was good to see people having fun in a non-judgmental, stress-free environment.

"I just think everyone should mind their own business and stay in their own lane, and if they want to be happy, let them be happy," Standifer said.

Christopher Manley, president of the Longview chapter of PFLAG and the head of the committee that organizes the festival, said the goal is to bring people together and offer love and support to all members of the LGBT community.

"What we're hoping is eventually we won't have to have a gay pride festival," he said. "But what it's purpose is today is to let those people that are struggling know that there are people out here and there's a community that loves them. And we're hoping to make it easier."

Pride events continue with a march beginning at 1:30 p.m. today in front of the Gregg County Courthouse and a vigil at 7 p.m. Monday at the courthouse.