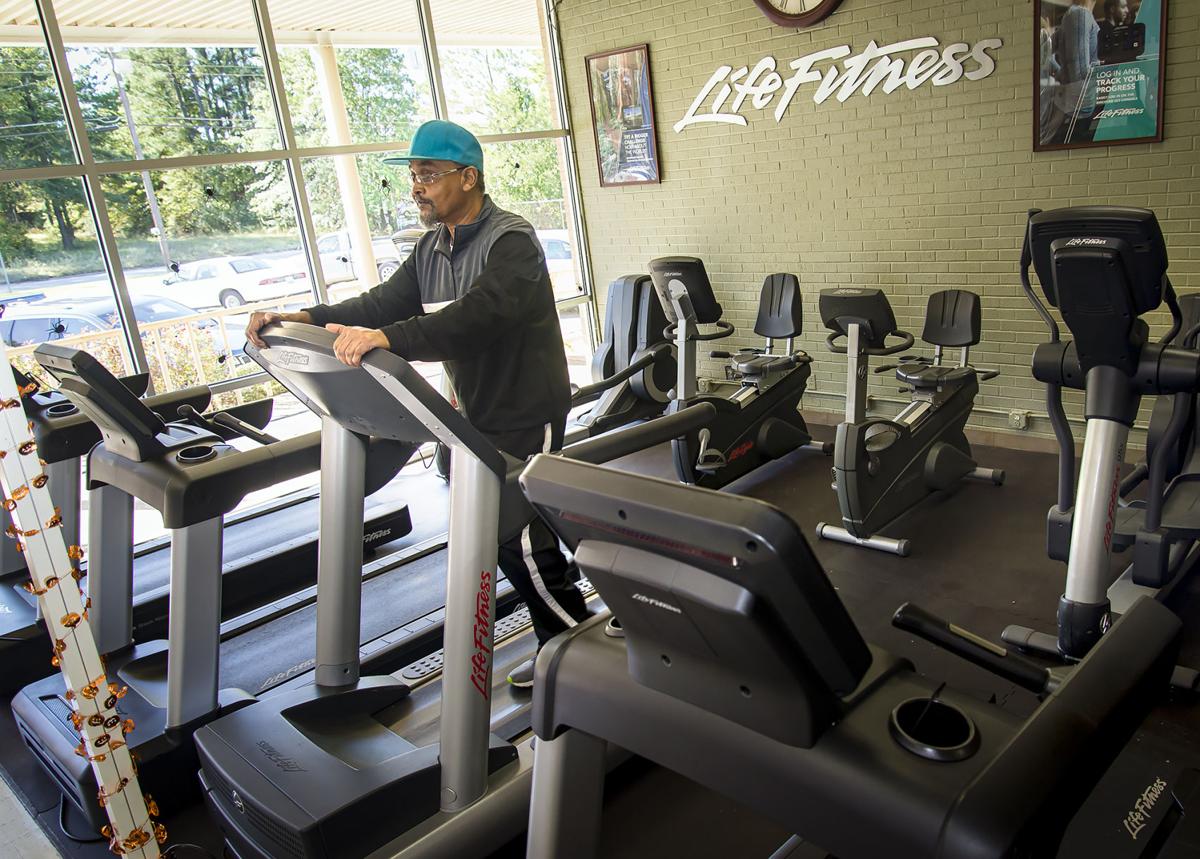 Anthony Kenneth Walker works out on a treadmill Thursday in front of the recently updated windows at the Paula Martin Jones Recreation Center. 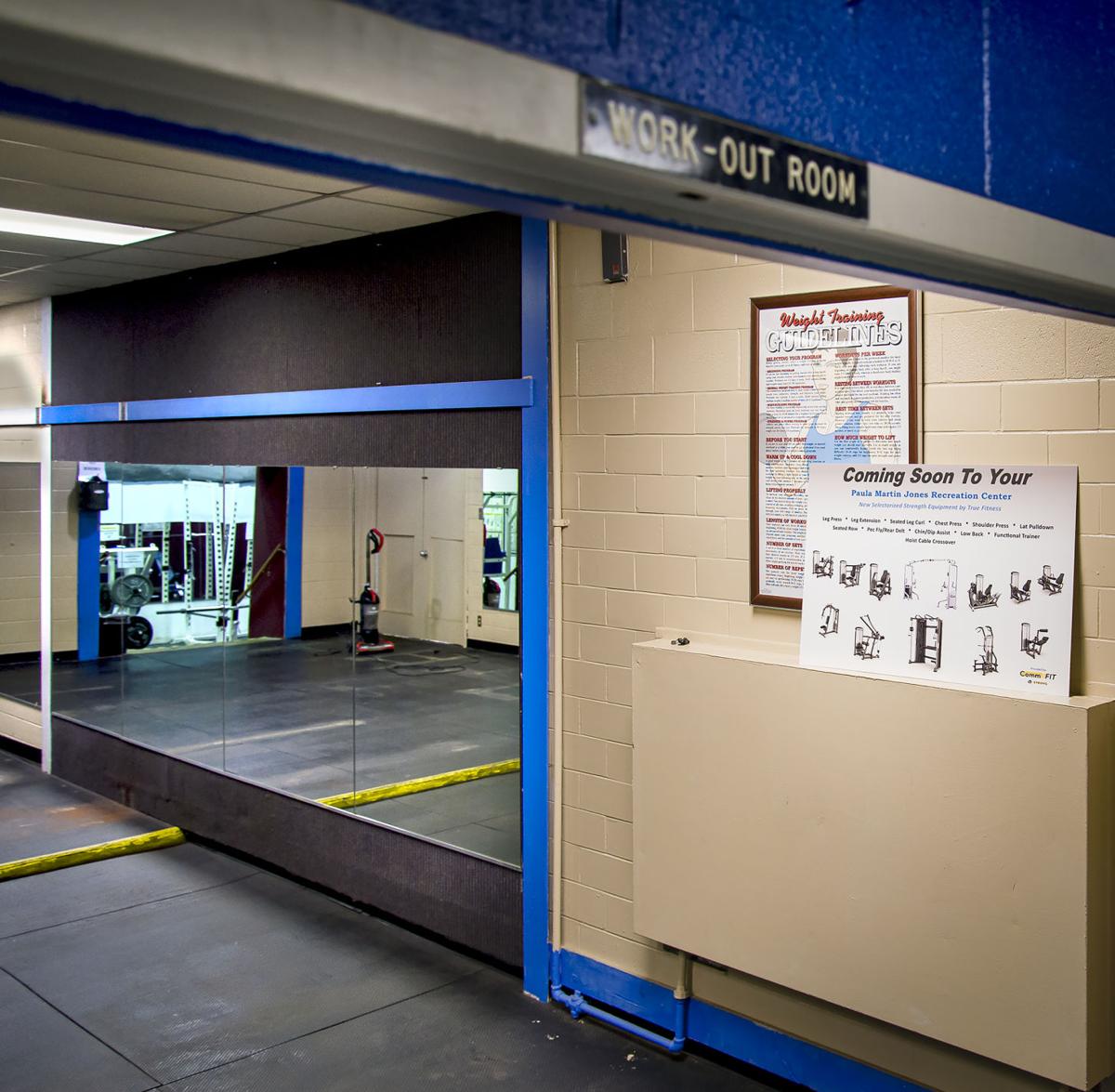 Old equipment has been removed from the work out room at the Paula Martin Jones Recreation Center to prepare it for next week’s arrival of new equipment. (Les Hassell/News-Journal Photo) 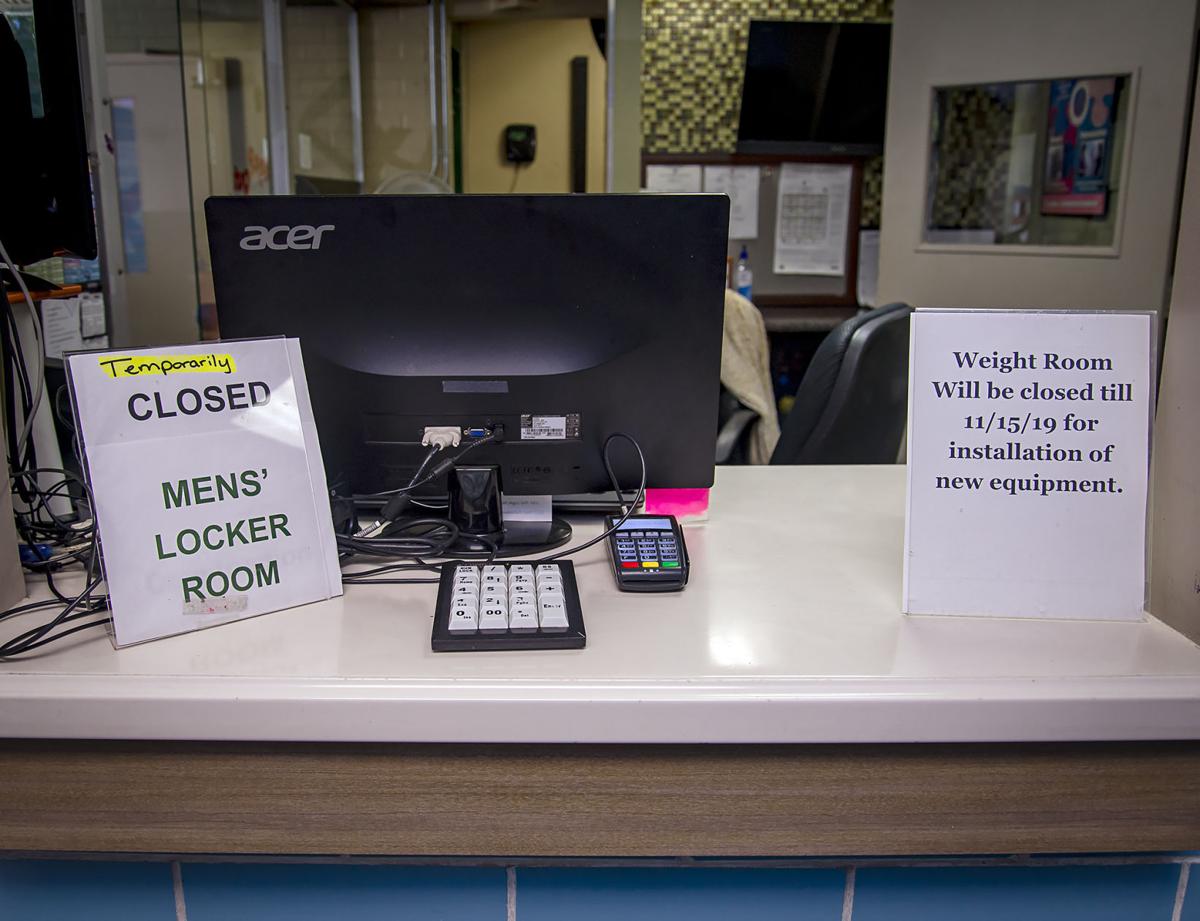 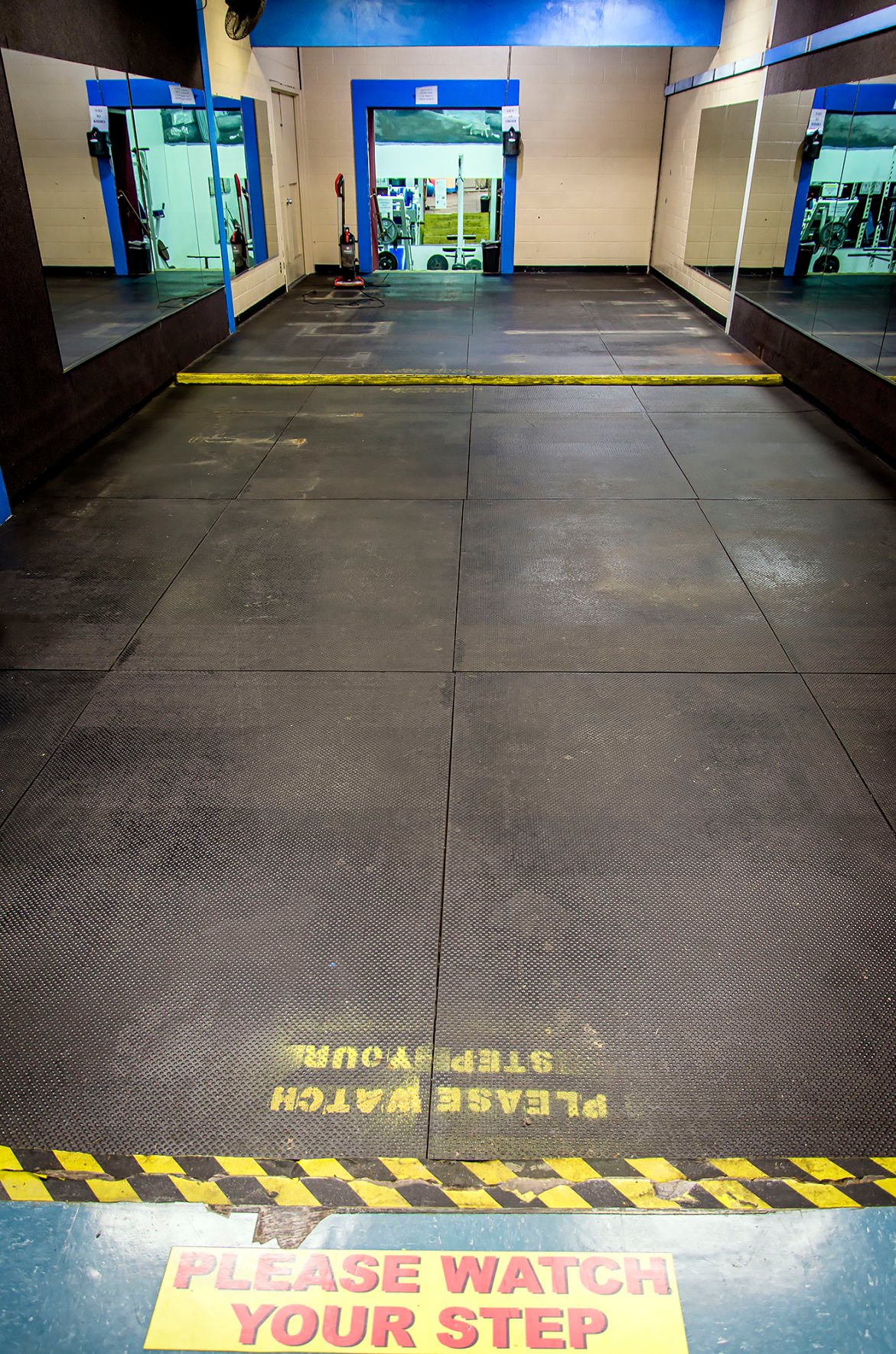 Old equipment has been removed from the workout room at the Paula Martin Jones Recreation Center to prepare it for next week’s arrival of new equipment. 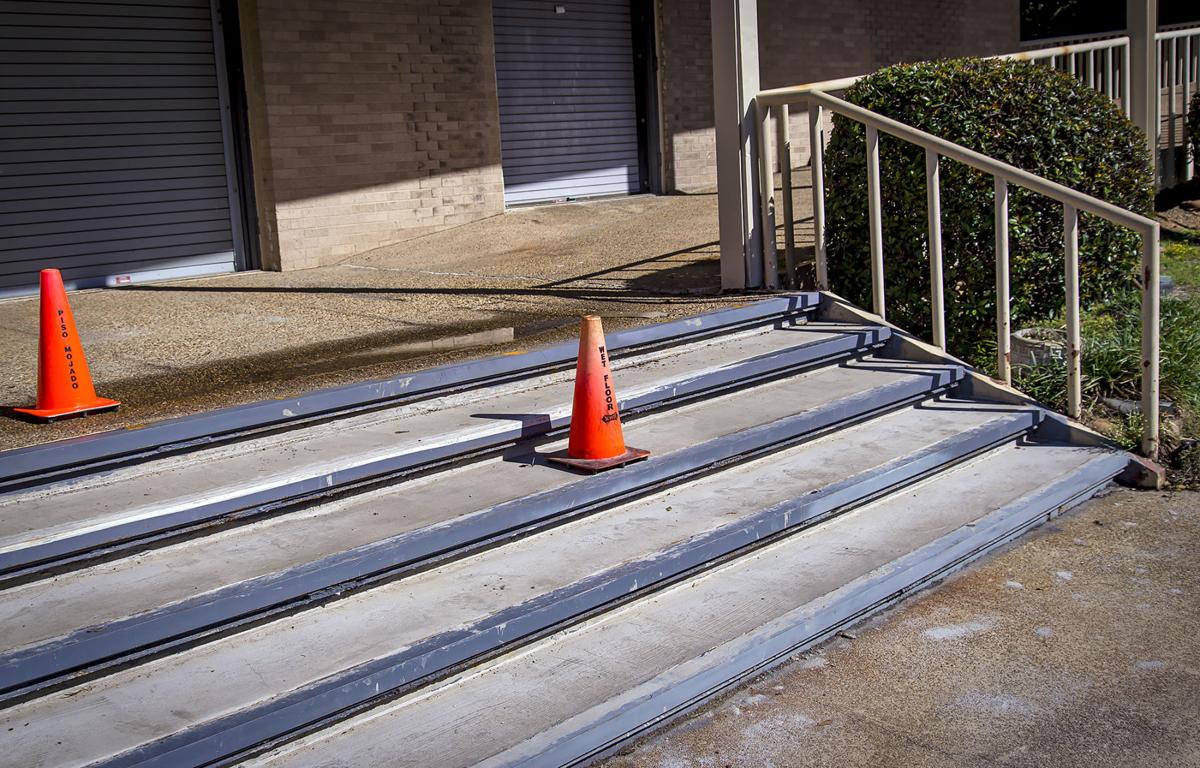 Steps leading to the entrance at the Paula Martin Jones Recreation Center have been updated. (Les Hassell/News-Journal Photo)

Anthony Kenneth Walker works out on a treadmill Thursday in front of the recently updated windows at the Paula Martin Jones Recreation Center.

Old equipment has been removed from the work out room at the Paula Martin Jones Recreation Center to prepare it for next week’s arrival of new equipment. (Les Hassell/News-Journal Photo)

Old equipment has been removed from the workout room at the Paula Martin Jones Recreation Center to prepare it for next week’s arrival of new equipment.

Steps leading to the entrance at the Paula Martin Jones Recreation Center have been updated. (Les Hassell/News-Journal Photo)

For about 15 years, Barbara McDaniel has been a regular at the Paula Martin Jones Recreation Center — especially its pool.

“I love the water,” she said, but she and other patrons aren’t completely satisfied with every facet of the facility.

“We’re getting a lot of improvements, and hopefully the ladies’ dressing room will be the next on the list,” McDaniel said.

Indeed, the city of Longview has made several capital upgrades to the 61-year-old center on Avalon Avenue.

While Paula Martin Jones isn’t among the parks and rec centers that will receive renovations under the $104 million bond package that voters approved a year ago, Parks and Recreation Director Scott Caron says more than $100,000 has been spent over the past few years to maintain the facility.

Paula Martin Jones was built in 1958, and Martin Charities operated the facility from 1990 until 1999, when it was donated to the city.

“The city has been responsible for its maintenance, operations and upgrades for the past 20 years, and I don’t believe that much work, to be honest with you, occurred between 1958 and 1999 other than the stuff that had to be done,” Caron said.

Caron talked about the center’s history and more recent maintenance, upkeep and updates this past week at a Parks and Recreation Advisory Board meeting at City Hall.

Advisory Board member Richard Lazarus asked for the presentation after a resident complained about maintenance and repairs at Paula Martin Jones.

At a Sept. 23 board meeting, Marcia Johnson told the advisory board that broken showers and broken tiles need repairs, asking that the city consider using bond money.

McDaniel also mentioned the need for repairs to the women’s locker room.

“The showers are hard to clean,” McDaniel said. “The tiles are cracked. It needs a new paint job, sprucing up.”

Patrons note that there have been much-needed improvements. Among them is Kenneth Walker, who has used Paula Martin Jones for the past six years.

“I like the way they treat you. Plus, it’s convenient to where I live,” Walker said.

The pool and swimming area were renovated in 2010.

In 2015, a Mr. Steam unit was added for spa quality steam showers. The city also added an automated external defibrillator. And in 2016, the pool was closed for a few days while sand in the filters was replaced. A pool vacuum also was added as well as shower frames in the women’s locker room.

The following year, updates were made to the front doors, gym curtains and the roof, while cardio equipment and dry sauna generator were added.

A chlorine generator was installed in the pool in 2018, and new high-volume air conditioning equipment was put in to replace aging units that had been donated by LeTourneau University, Caron said.

This year, the city has completed a new entrance to the men’s locker room, smoothed the front steps, painted the exterior and replaced what were single-pane windows with double-pane windows that Caron said keep air cool in the summer and warm in the winter, especially near the front entrance where cardio equipment is located.

The weight room has been mostly cleared of old equipment while the center awaits new equipment from a contractor, but it’s been a process that has taken longer than Caron expected because the city was offered a newer product line at the same cost as what it had ordered — if the city waited for release of the line.

“Part of that delay is on them and part of it is on us as well because we felt that getting the newer equipment” is a better option, Caron said.

“I think one of the things that people say is a facility or park is not maintained well, and I think what they intend or what they mean is that it hasn’t been upgraded or it’s not to the current standards of what we would do when we install something in 2019,” he said, “because we do maintain items. It’s just to the condition of which they are. We may not improve upon them, so again, those are the challenges which we face.”

As for the women’s locker room, the Parks and Recreation Department is working with the Facility Services division to address issues.

Advisory Board member Sherry Krueger said Paula Martin Jones Recreation Center “looks good.” As for the showers, she said, “I’ve seen worse in my lifetime, but if you don’t get a hold of it now, it will get worse.”

Krueger suggested using bleach, soap and a brush to clean the showers thoroughly.

Patrons such as McDaniel want to see improvements, but the current conditions don’t stop them from praising or using Paula Martin Jones.

“We have the best pool, I think, in Texas,” McDaniel said, “and to be able to stay active in other activities, I need my water exercise.”