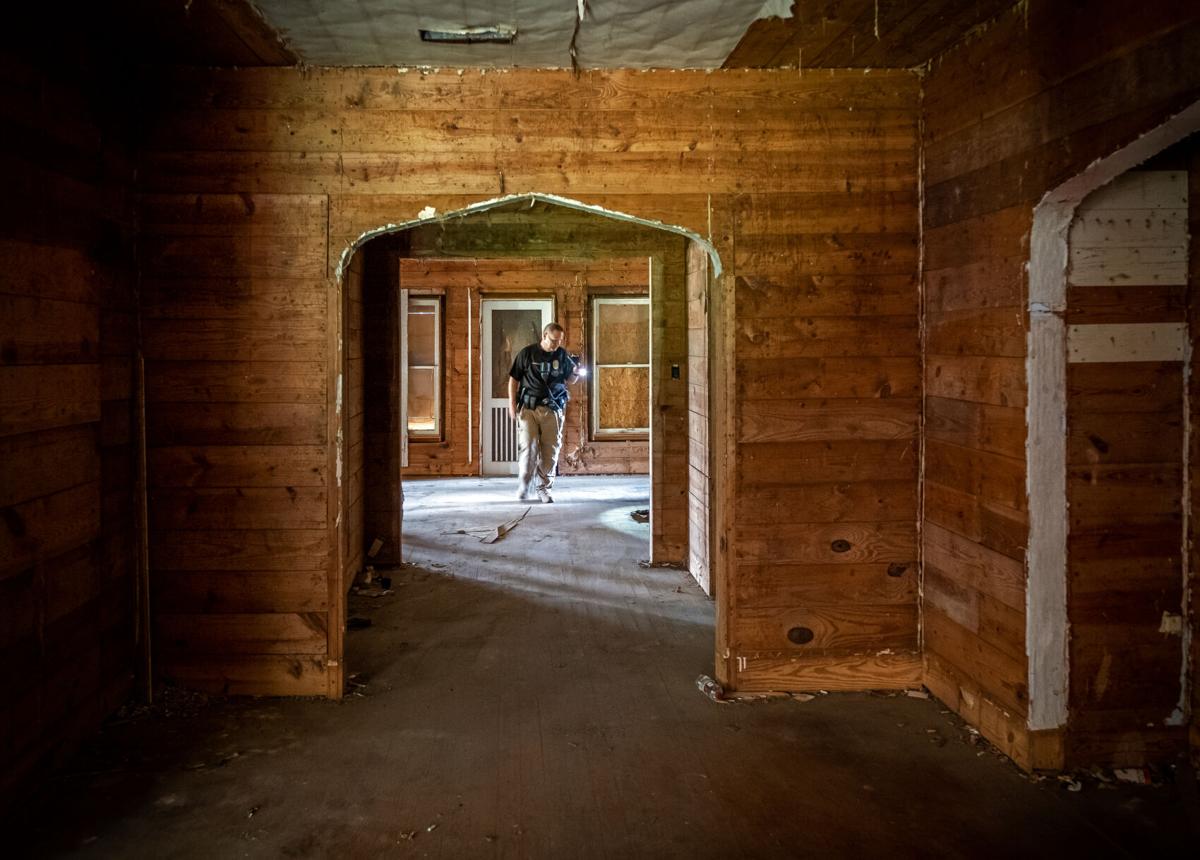 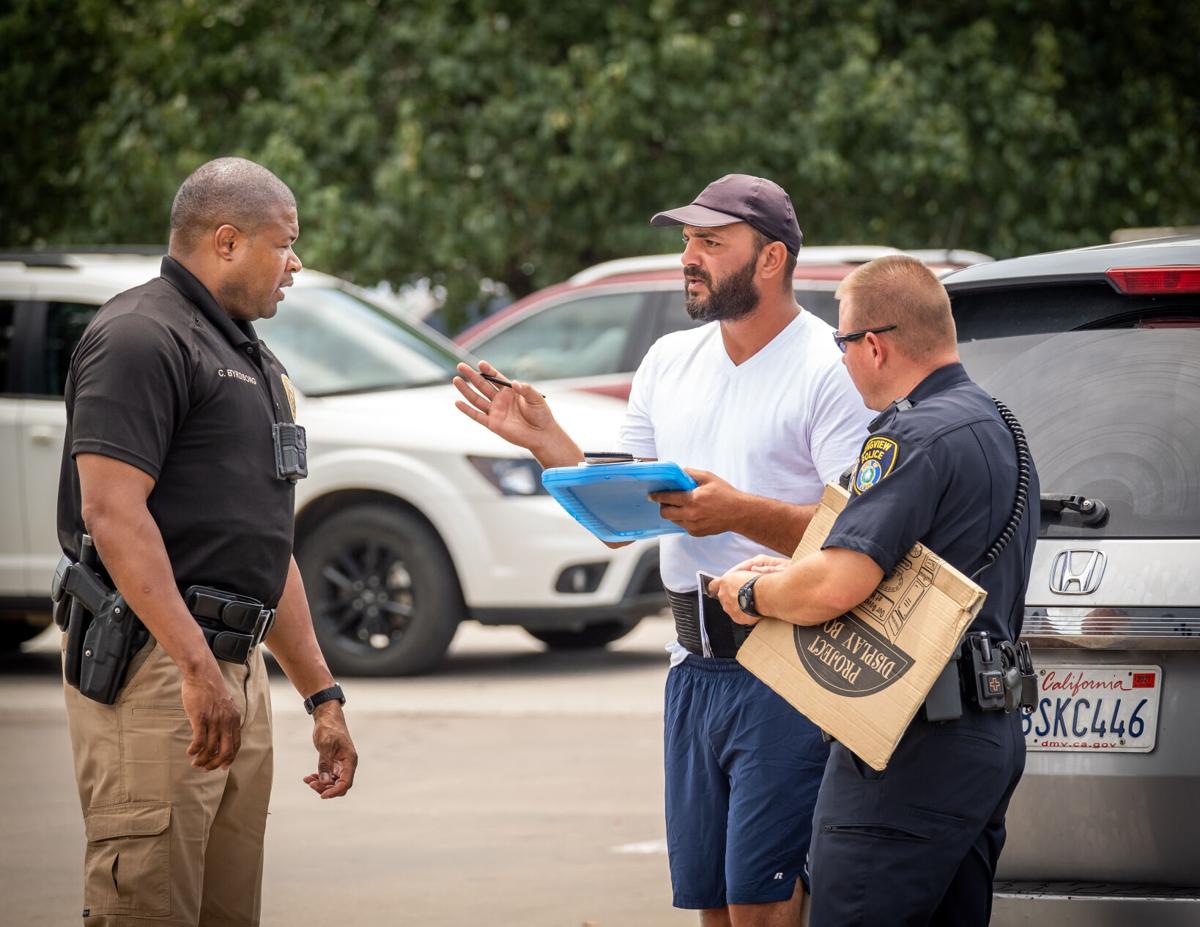 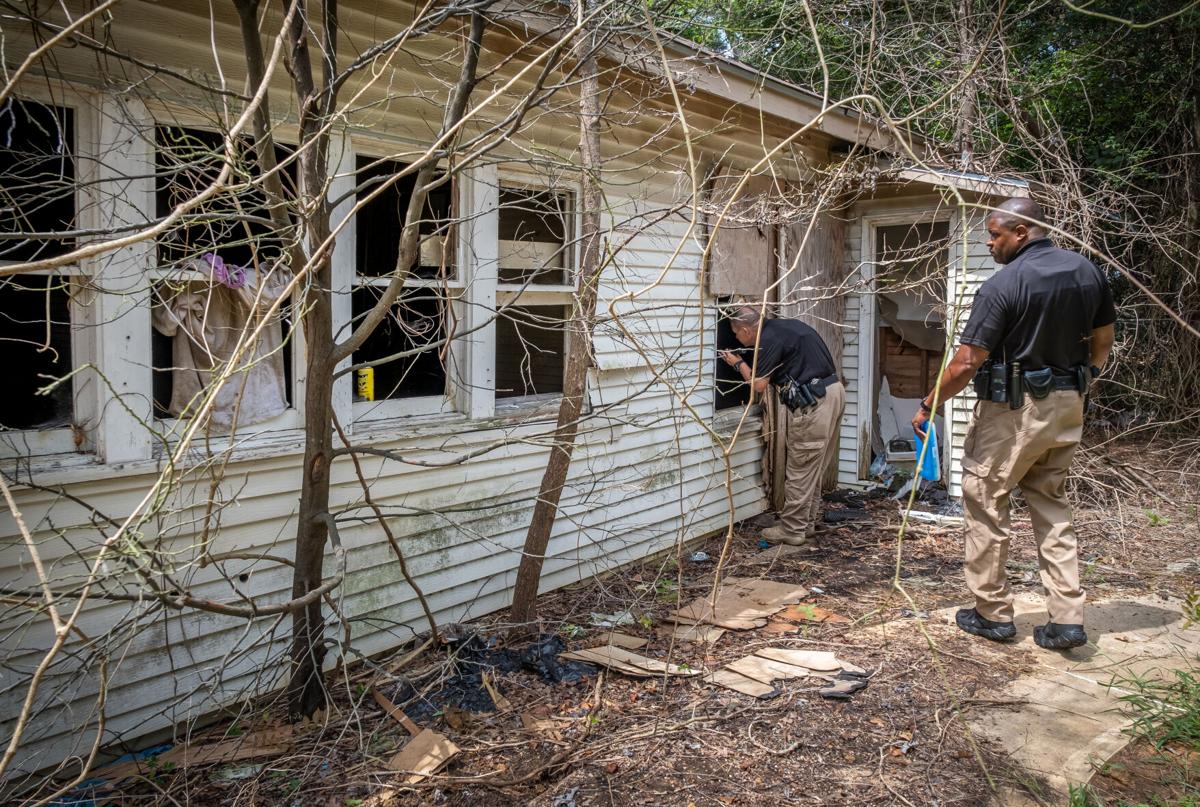 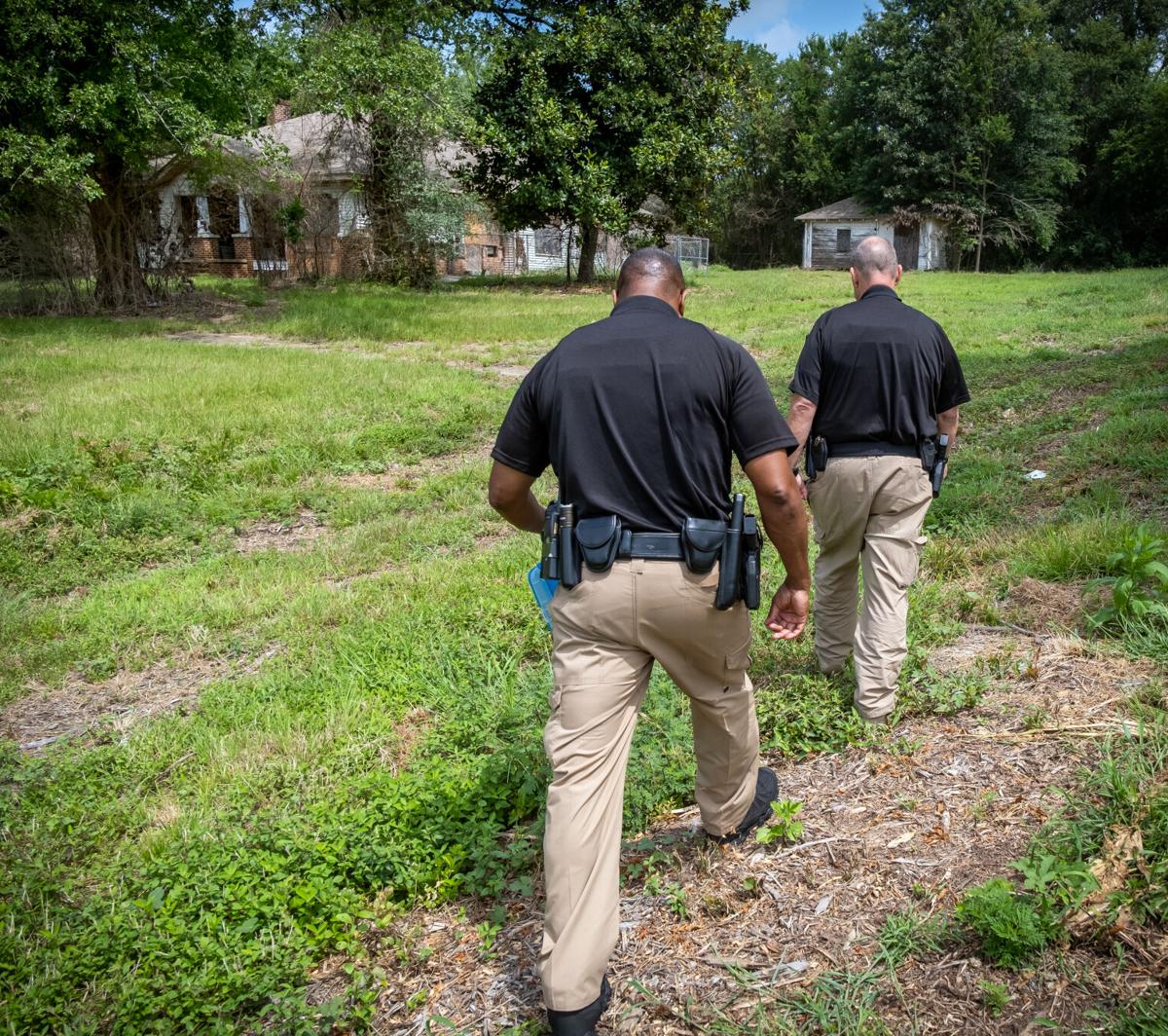 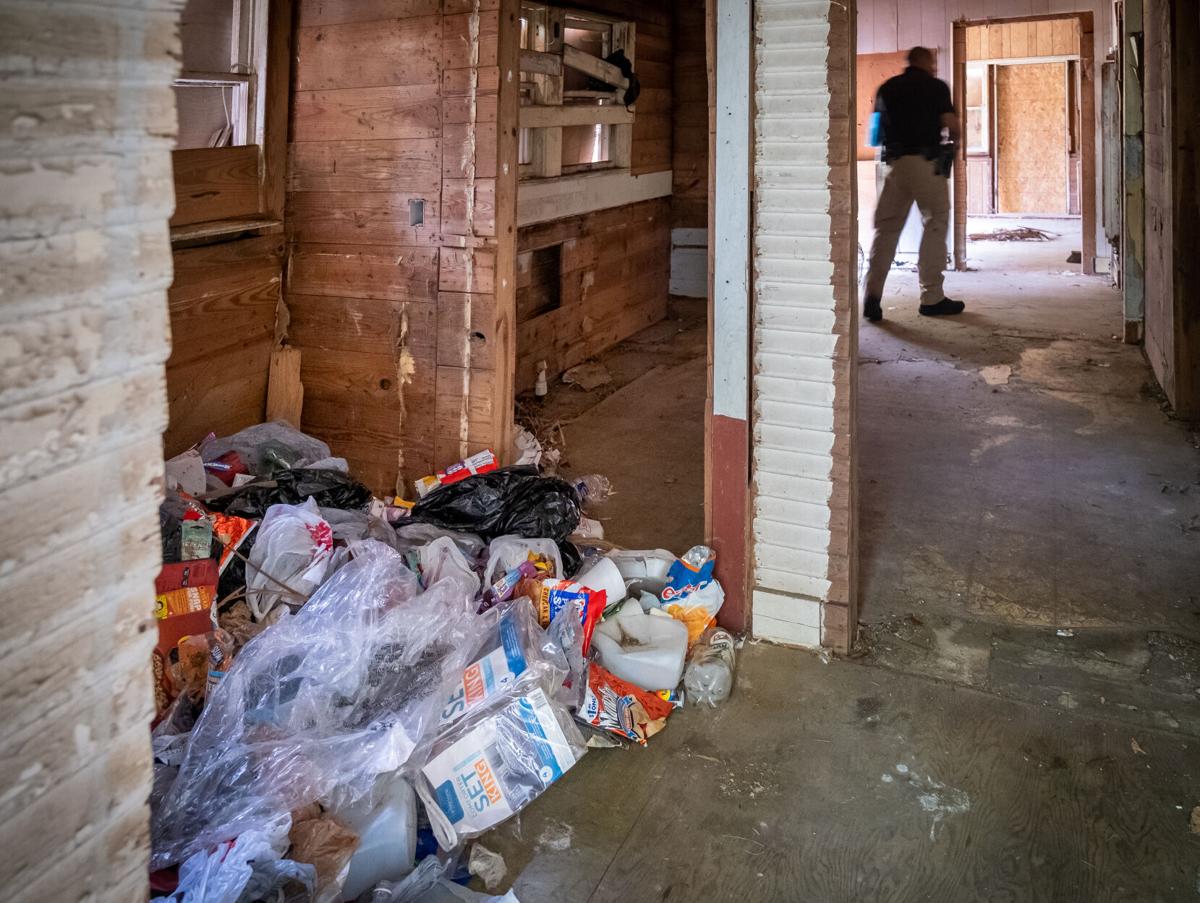 Longview Police Outreach Services Team officer Ron Duncan searches an abandoned home Friday for evidence of vagrancy. Duncan said a dedicated trash pile is often a sign that vagrants have moved into a building. The pile is hidden from outside view to help keep their presence unnoticed. 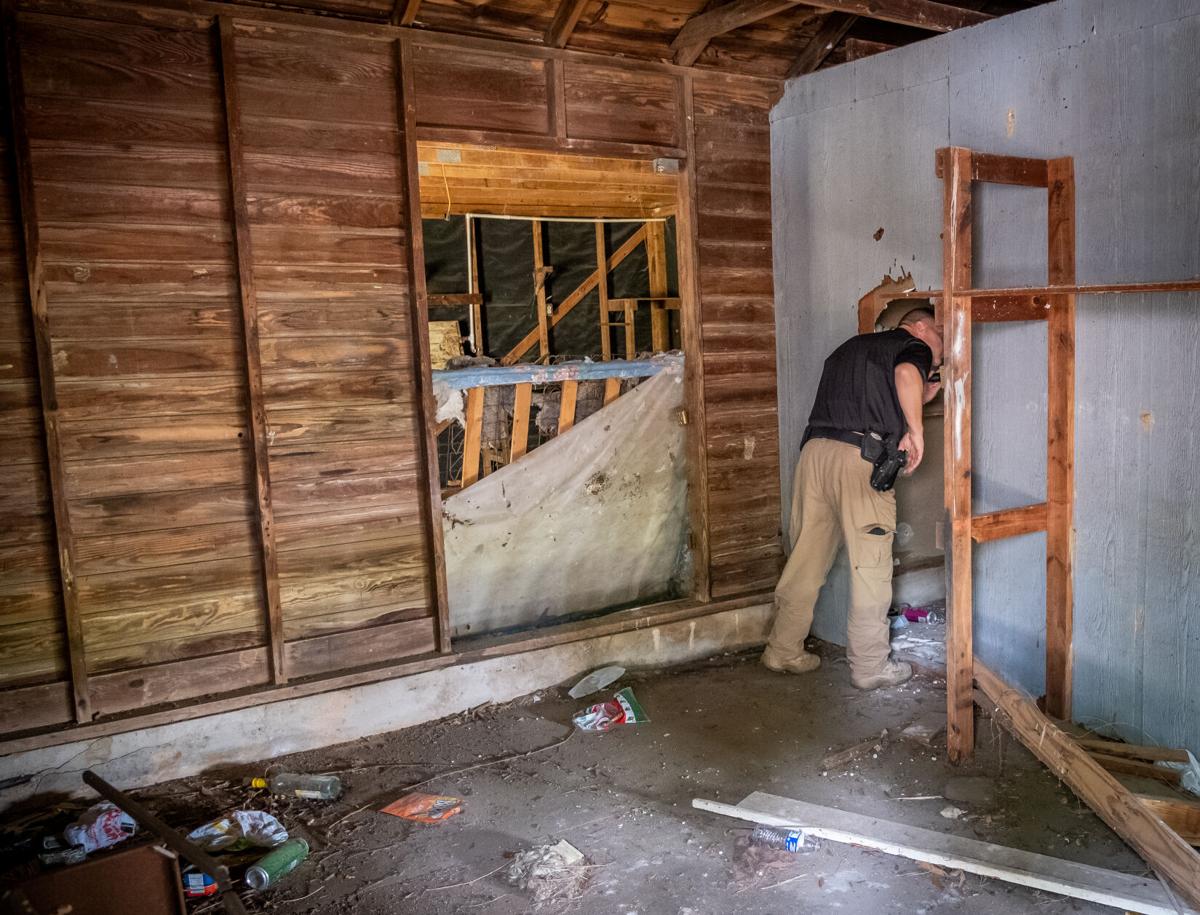 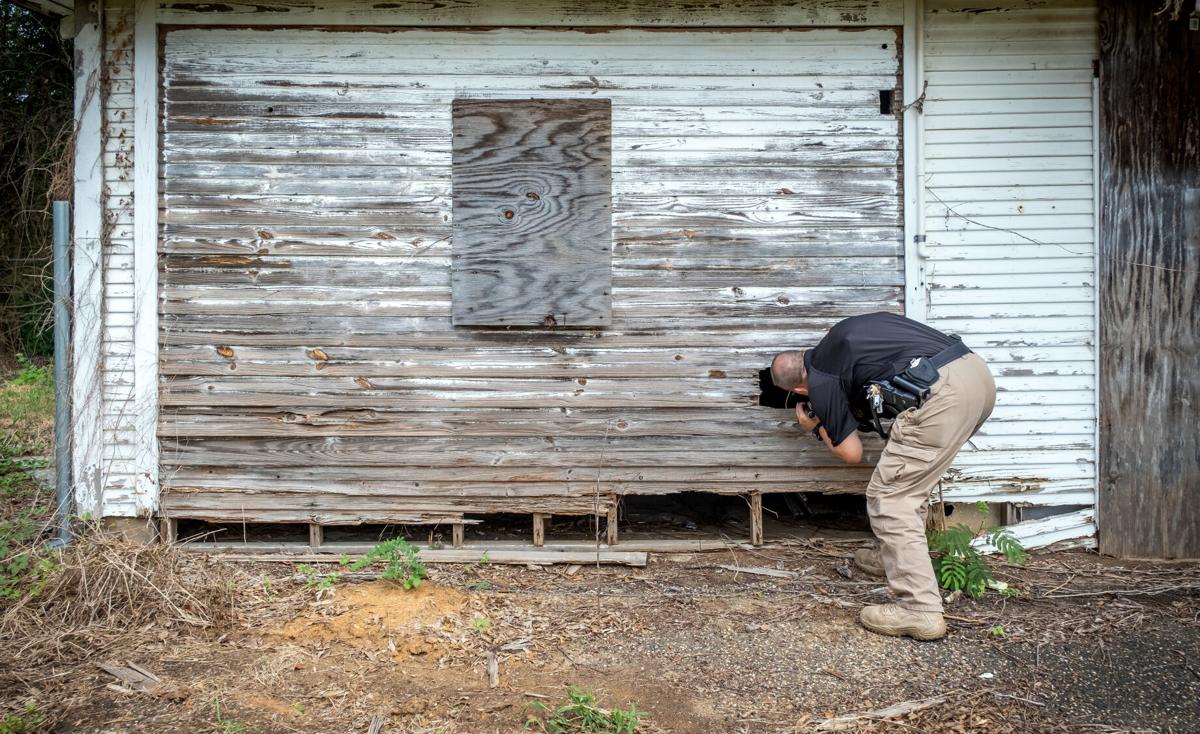 Longview Police Outreach Services Team officer Ron Duncan searches an abandoned home Friday for evidence of vagrancy. Duncan said a dedicated trash pile is often a sign that vagrants have moved into a building. The pile is hidden from outside view to help keep their presence unnoticed.

A new state law banning camping in public places won’t change how Longview has been working to address homelessness in the city, and police say progress is being made since efforts began in 2018.

“It’s not going to affect us any at all, because of the ordinance we already had in place,” said Officer Ronald Duncan, one of two officers who comprise the Police Outreach Services Team.

The officers are tasked with helping decrease homelessness by directing people without housing to services to assist them. They also help enforce the city’s anti-camping rules and other measures the city put in place in 2017 to address activities often associated with homelessness, including soliciting for money in a way that threatens other people and in certain locations around town. The measures were approved in 2017 but really were implemented at the beginning of 2018, said Longview police spokesman Brandon Thornton.

The state law was adopted this year in response to the city of Austin’s move to lift its own camping ban two years ago. The ban was reinstated by voters, though, as homeless camps grew around that city.

The law makes camping in a public place a Class C misdemeanor.

“The bill requires a peace officer, before or at the time the officer issues a citation for the offense, to make a reasonable effort to advise the person of an alternative place where they may lawfully camp and to contact an appropriate official or nonprofit organization to provide the person with information regarding the prevention of human trafficking or any other services that would reduce the likelihood of the person continuing to camp in the public place,” according to information from the state Legislature’s website. “If the person is arrested or detained solely for that offense, the arresting or detaining officer must ensure that all of the person’s personal property not designated as contraband is preserved.”

Longview’s camping ordinance defines camping as living “outside of a permanent structure in a tent or other temporary lodging”:

Thornton said camping in the city could be enforced under either the state law or city ordinance, but not both.

“Our objective is outreach over enforcement,” Duncan said. Duncan was one of the original members of the Police Outreach Services Team.

“Even after we write the citations, if they agree to ... something different, whether it’s a substance abuse program or job skills training, whatever we can come up with that we can help them, if they complete that we get the citations dismissed,” Duncan said. “We put a lot of emphasis on outreach. The enforcement is just for those guys who refuse to do anything .”

Even then, enforcement isn’t always the answer, he said. Services are always offered.

As a result, he and Thornton said that in general, calls reporting soliciting, for instance, have decreased.

“I couldn’t tell you how many faces that we used to see that we either barely see anymore or don’t see anymore,” Duncan said. “You notice when one of them quits coming around. We’re seeing a lot of that. The core group (of homeless people), it gets smaller and smaller. They’re finding different ways to live their life.”

Some relocate or move to be with family. Others get jobs. Sometimes, the POST officers have helped them find permanent housing or help them get into rehab.

“They point is they’re not just continuing to do what they’ve been doing,” Duncan said. “They’re actually trying to do something different.

“My belief is it’s because of the outreach, not the enforcement,” Duncan said.

Duncan recently was joined in POST duties by Officer Christopher Byrdsong. Like Duncan, Byrdsong is a certified mental health peace officer. He also is a former unit manager at what was Meadow Pines Hospital, which served people with mental illness.

“His qualifications and experience — it’s valuable in those fields,” Duncan said, adding that Byrdsong has been making a difference in working with people with substance abuse and mental health issues. He’s helped get a number of people into rehab and housing.

POST officers had to learn what worked and didn’t work when the unit started in 2018.

“We’re at a spot where we’re comfortable with the progress we’re seeing and how we’re doing it,” Duncan said. “We’ve got most of the wrinkles ironed out. We’re always looking for new and better ways.”

Longview's ban on camping in the city existed before 2017, but that year saw the city also adopt an ordinance designating areas in town where people couldn't solicit for money. Here's a look at those enforcement efforts since 2017: