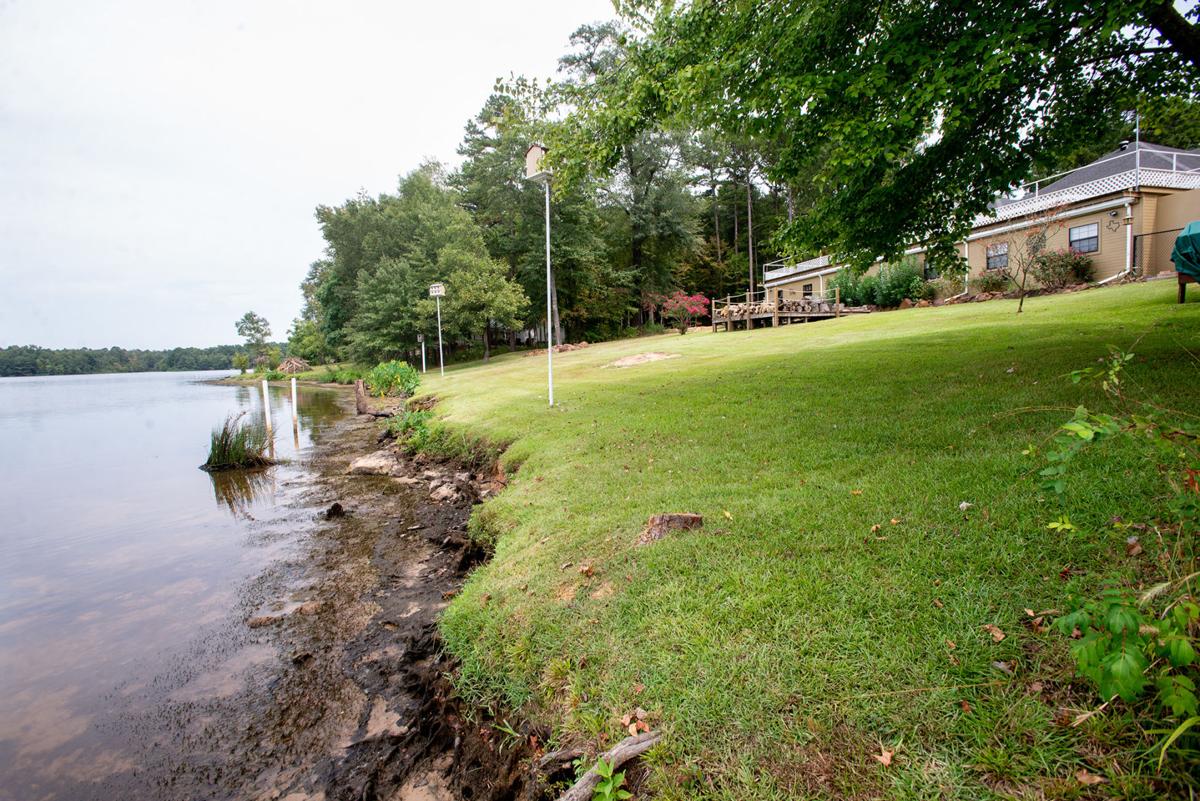 Efforts to allow development along the shoreline of Lake Gilmer — such as the backyard of this home seen Saturday off the lake on Fallow Trail — have gone nowhere. Residents aren’t allowed to develop 7 feet above the shoreline. 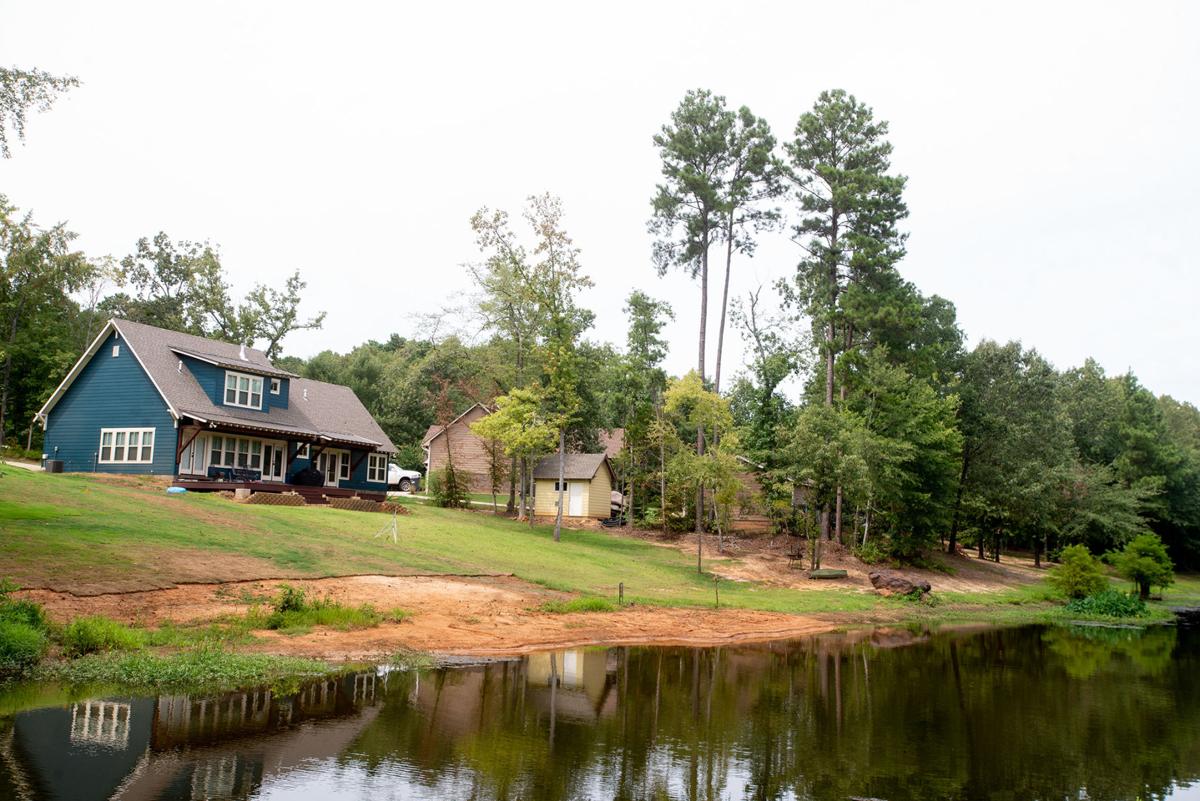 The back yard of a home on Lake Gilmer off of Fallow Trail on Saturday August 31, 2019. (Michael Cavazos/News-Journal Photo) 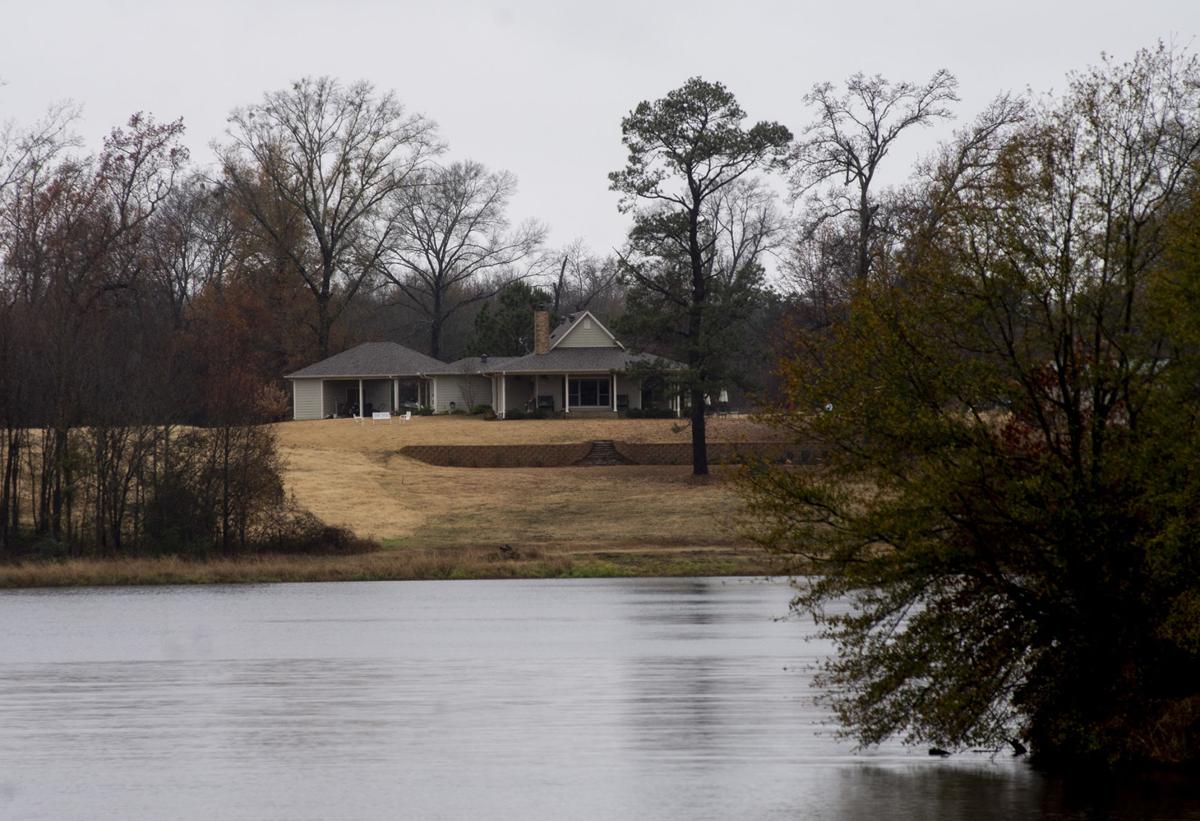 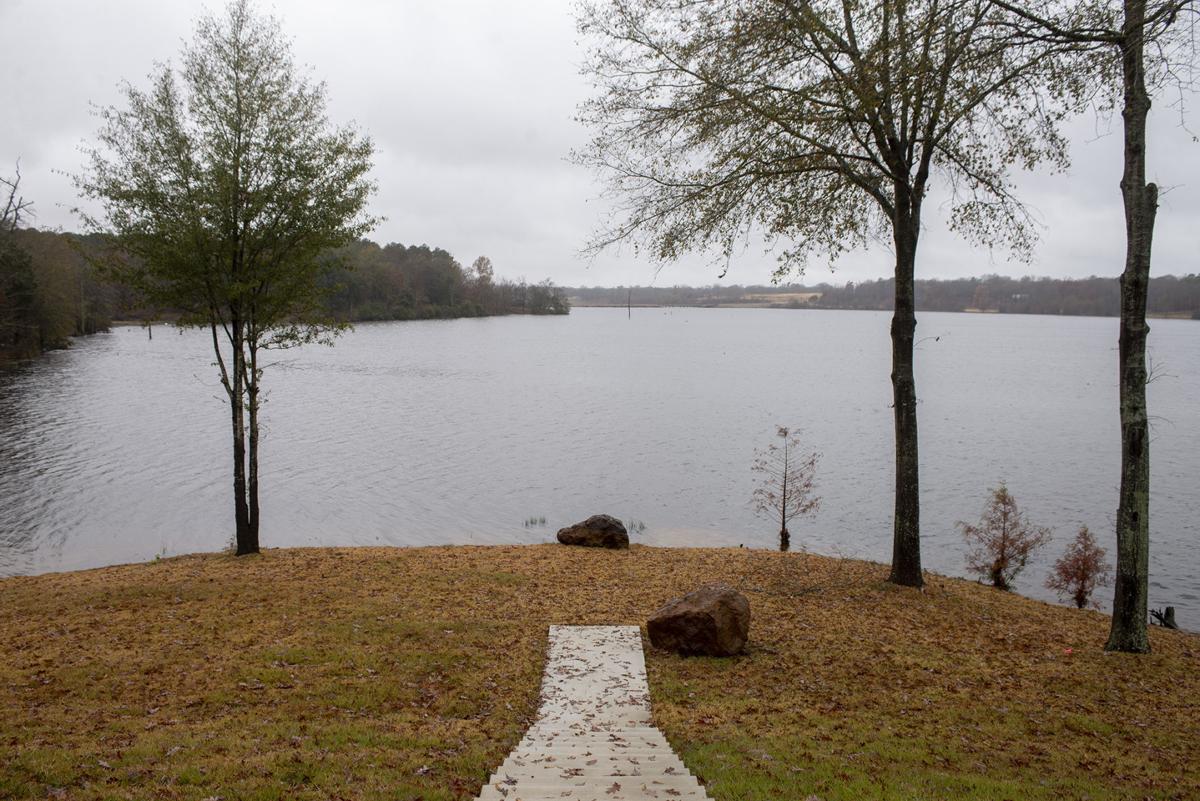 Undeveloped shoreline in the back yard of a Fawn Crossing home for sale on Lake Gilmer on Saturday December 8, 2018. (Michael Cavazos/News-Journal File Photo) 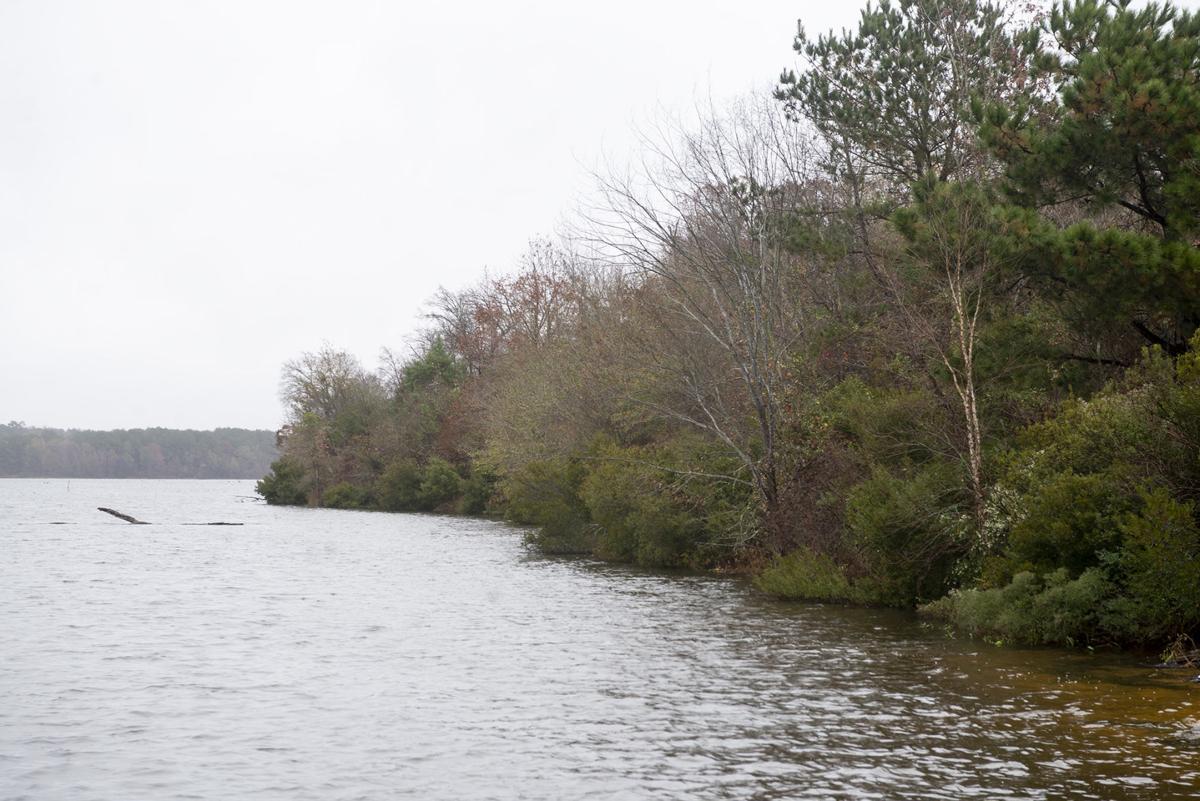 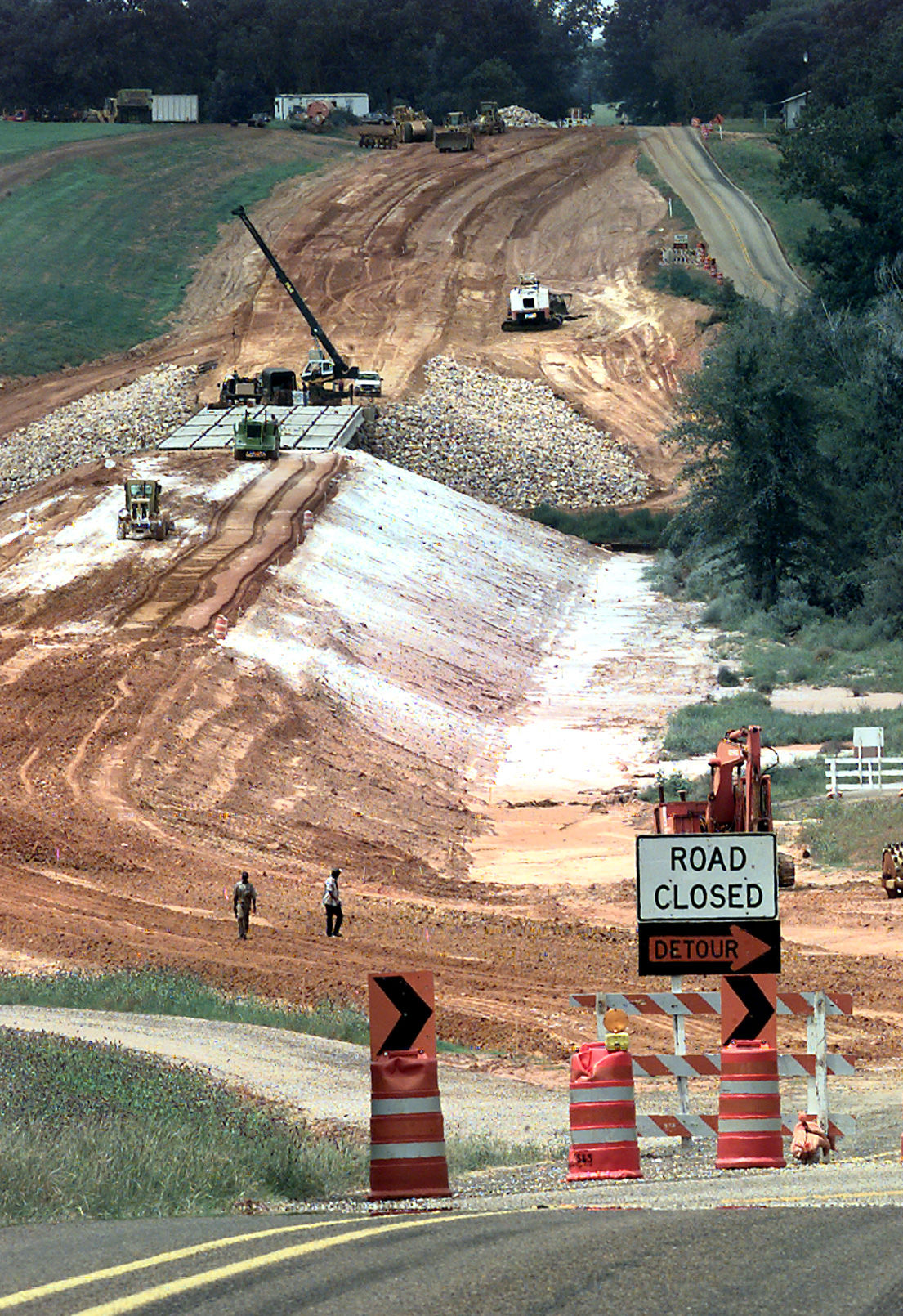 Workers construct a bridge in August 1997 on FM 852 outside of Gilmer over what will be Lake Gilmer. 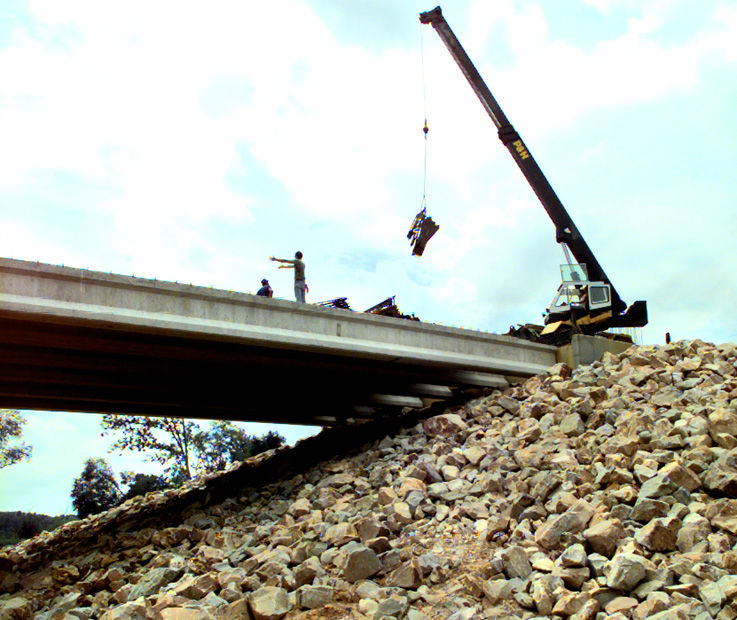 Douglas Roper, the supervisor with Moore Const. Co. out of Sulpher Springs operates the crane as they unload overhang support brackets while Chuck Williams, on the bridge guides him as they work on the FM 852 bridge over Lake Gilmer in August 1997. (Kevin Green/News-Journal File Photo)

Efforts to allow development along the shoreline of Lake Gilmer — such as the backyard of this home seen Saturday off the lake on Fallow Trail — have gone nowhere. Residents aren’t allowed to develop 7 feet above the shoreline.

The back yard of a home on Lake Gilmer off of Fallow Trail on Saturday August 31, 2019. (Michael Cavazos/News-Journal Photo)

Undeveloped shoreline in the back yard of a Fawn Crossing home for sale on Lake Gilmer on Saturday December 8, 2018. (Michael Cavazos/News-Journal File Photo)

Workers construct a bridge in August 1997 on FM 852 outside of Gilmer over what will be Lake Gilmer.

Douglas Roper, the supervisor with Moore Const. Co. out of Sulpher Springs operates the crane as they unload overhang support brackets while Chuck Williams, on the bridge guides him as they work on the FM 852 bridge over Lake Gilmer in August 1997. (Kevin Green/News-Journal File Photo)

GILMER — It’s been six months since about 50 stakeholders in Lake Gilmer met to learn why the multimillion-dollar city investment has yet to pay dividends.

“Every time I try to do something, I get told I don’t have the authority,” said retired Gilmer businessman Steve Dean, referring to his efforts to shepherd a change in the city’s permit with the Texas Parks and Wildlife Department.

Dean has spent much of the past six months negotiating the bureaucratic maze that surrounds any reservoir project, including Lake Gilmer. He started with the U.S. Army Corps of Engineers, which holds the umbrella permit under the Clean Water Act — and final say — on anything to do with the lake.

He’s not alone in wanting to get lake development off high-center, where it has been stuck.

The Corps sent Dean to the state parks department, which holds the permit that governs what can and can’t be done along the shoreline. No development is allowed 7 feet above the shoreline, which could be a lot farther than 7 feet from the water depending on the slope.

That means no docks, no boathouses. Residents are not allowed to mow the shoreline for a spot to fish that won’t hide water moccasins.

The reason is a four-syllable word: mitigation. State and federal environmental regulations require that land be set aside in equal amount to the acreage lost to a lake.

And somehow, part of Lake Gilmer’s mitigation acreage rings the lakeshore. That means no mowing, no clearing, no building.

“It’s a little disappointing to build on a lot out at the lake,” lake resident and Gilmer ISD board President Mark Skinner said Friday. “But all we get to do is enjoy the view. ... There is that restriction. It’s 7 feet above elevation, so it’s about 10 feet of shoreline (at my lot) that is unkept. So it makes going down there difficult.”

The city owns its namesake lake, but has not annexed it and so is not able to tax homes and other property there.

Add to that the fact Gilmer Economic Development Corp. spends 85 cents on every city sales tax dollar on the lake’s debt. Sales taxes typically are spent to lure new industry and encourage economic development of a city, to grow its tax base.

Gilmer owed slightly more than $4.5 million on the 19-year-old loan from the Texas Water Development Board when Dean gathered the stakeholders in December in the Upshur Rural Electric Cooperative Auditorium.

Skinner keeps his boat in storage, since he can’t keep it at his house. With no docks or piers allowed, the only boat access is a public ramp at FM 852, and Skinner said fishermen use the lake, but no other recreation happens there.

The reservoir should be a draw for new residents, Skinner and others said. Even though the lake is not inside the city limits, they said Gilmer is where residents there would shop, dine and supply their households.

“We’re building a new high school,” Skinner said, citing a new campus due to open for the 2020-21 school year.

The district also added two early childhood classes for 3-year-olds for the new school year, as the student population tops 2,500 for the first time in Superintendent Rick Albritton’s 17 years there.

“We certainly anticipate some growth once we get in the new school,” Skinner said. “It would be nice if we did have families that wanted to move from, say, the Longview or Tyler area, because we’ve got a lot of lots out here at the lake.”

Not many homes have gone up at the 1,010-acre reservoir as a result of the mitigation acreage ring around the reservoir. The shoreline rule is also why the lake has never fulfilled its promise as a recreation destination.

“I’ve spoken to (Parks and Wildlife), and they sent me an application,” Dean said.

What the parks department couldn’t do, though, was recognize Dean as a representative of the city.

Gilmer City Manager Greg Hutson told Dean earlier this month he was welcome to an appointment as aviation director at the airport but not as director of Gilmer Economic Development Corp., which is a paid and unfilled position.

Hutson turned away the notion of appointing Dean to speak on the city’s behalf to the Corps and the state parks department.

“No, because he is not an employee of the city,” he said.

Dean said that leaves him no way to ramrod a permit amendment that lake residents want.

“The whole point of my effort has been to meet with the Corps ... and come up with a plan to get a modification to our permit so we could have the opportunity to develop the lake for the benefit of the city and so we could make it pay, make a return on investment,” Dean said. “I’m not going to pursue it anymore.”

The city has no plans to pursue the permit modification and has not approached either the Corps or Texas Parks and Wildlife about it, Hutson said.

“I’ve also not sold several houses and lots because of the restrictions on the lake,” he added. “They fall in love, they fall in love with the area. And when I get to the part where, ‘You can’t have a dock or a boat slip,’ that’s a deal-killer.”

Wilson acknowledged the city won’t see property tax revenue from the reservoir, but he said sales taxes could blossom from a community of homeowners doing business in the county seat of Gilmer.

“The city doesn’t want anything to do with it,” he said.

Mayor Tim Marshall bemoaned the restrictions in the Parks and Wildlife permit.

“Why would anybody agree to all these stipulations?” he asked. “Well, we did.”

The mayor, who was not in office during permit negotiations, said he would love to see development at Lake Gilmer.

But with successive tight city budgets, and with most of the economic development funds paying off lake debt, he echoed his city manager in failing to see a way to recoup an investment in the reservoir.

Hutson said lake residents ask for expensive lake management including requests for dredging. He previously has said the next city project at the lake will be repairs to the spillway.

“Everybody’s got great ideas for that lake,” Hutson said. “But nobody has talked to me about how we’re going to pay for what the homeowners want for that lake. ... We’re still trying to repair streets. It doesn’t benefit me and the city enough to try and open up that can of worms. ... It was all, ‘If you build it, we’ll come.’ That’s part of the albatross around our neck. I wish there was something we could do with it.”

Moving a mitigation area would require expensive environmental, artifact and other studies be conducted on some new site.

“If those homeowners out there at the lake want to pay for that environmental study, we’re good,” Hutson said, describing sales tax revenue as inadequate to do much more than carry the bond on the lake’s debt.

Lake Gilmer was built as a future water source. The city still relies solely on wells for potable water. The permit restrictions make it a challenge to build a water treatment plant there, or even install an intake pipe to sell raw water to other municipalities.

But Dean said making the shoreline permit development-friendly would draw money into the city in the form of homebuilding, recreation and other economic development elements.

“The problem is, in Gilmer, if you have a company that has white-collar employees, there’s no place for them to build their homes here similar to where they came from,” Dean said. “And Lake Gilmer is perfect for that.”

Dean said he and his family own property near the lake, but it is in the low-lying bottoms and couldn’t be easily developed regardless of the rules on the lake’s shore.

“The city spent $25 million on the lake — I don’t know, they won’t tell me,” Dean said. “I want to put that money back, so the city can fix the streets. I want to see the lake developed for the city, for the people of Gilmer.”