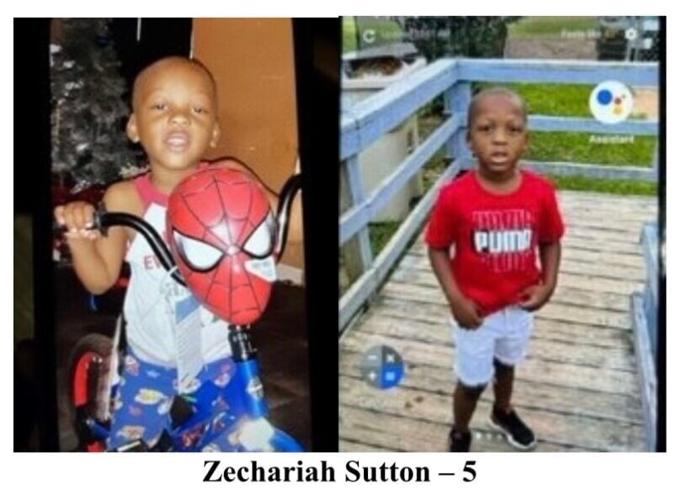 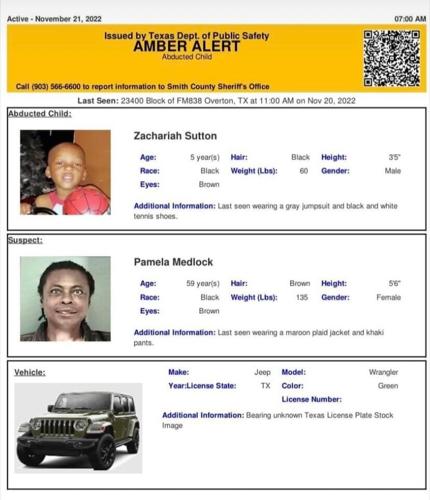 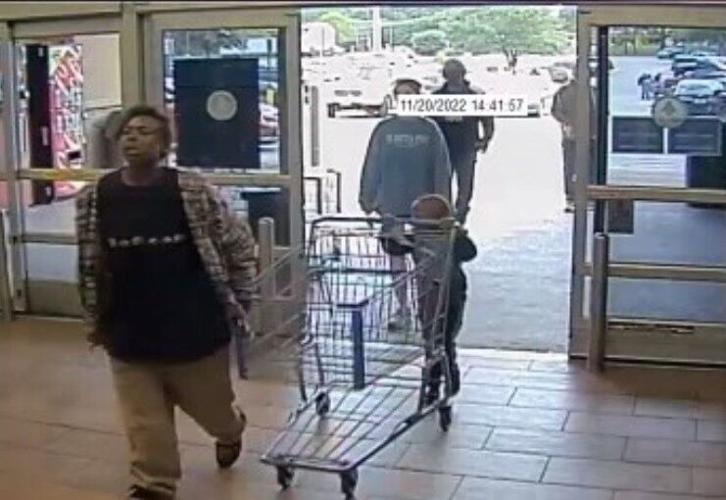 Pamala Medlock, left, and Zechariah Sutton are seen walking into the Troup Highway Walmart in Tyler on Sunday afternoon around 2:41 p.m., nearly four hours after he was last seen by family and 12 hours after family officially reported him missing to law enforcement. 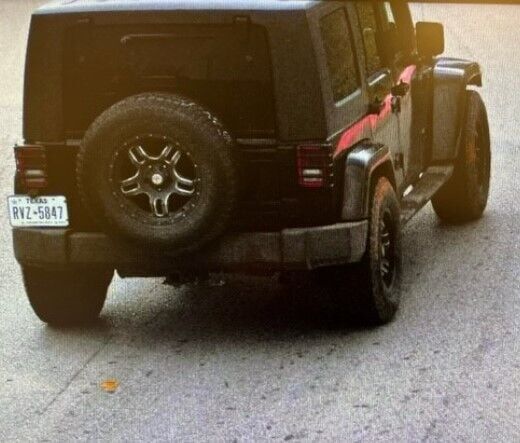 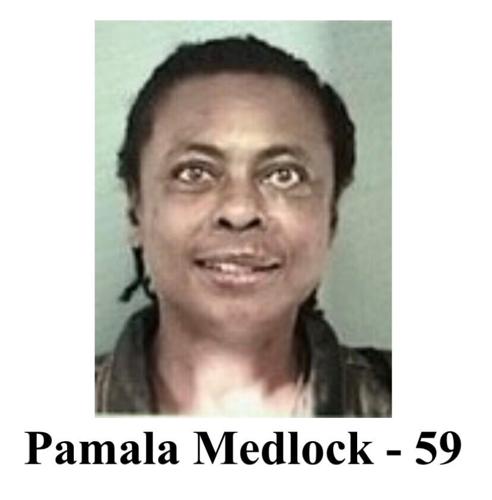 Editor's Note: This story has been updated and will be updated to reflect new information as it is made available. Please refresh your browser for the latest information.

Zechariah Sutton, 5 years old, on Monday around noon was found with the family friend he was last seen with Sunday. They were located in Mitchell County near Colorado City, headed west on I-20, according to Smith County Sheriff's Office Sgt. Larry Christian.

The child is "safe and appears to be unharmed," Christian said. County investigators are on the way to Mitchell County at this time.

Zechariah had previously been last seen by his family at 11 a.m. Sunday at his residence at on Farm-to-Market 838 near Overton, according to Christian. The Texas Department of Public Safety issued an AMBER Alert this morning, labeling this as a child abduction.

Local authorities believe a missing 5-year-old child could be in danger due to the mental state of the woman he was last seen with, according to Smith County Sheriff's Office investigators.

Zechariah Sutton, 5 years old, was last seen by his family at 11 a.m. Sunday at his residence at on Farm-to-Market 838 near Overton, according to Smith County Sheriff's Office Sgt. Larry Christian. The Texas Department of Public Safety issued an AMBER Alert this morning, labeling this as a child abduction.

Christian said the child's grandmother, who is his legal guardian, allowed a "family friend" Pamala Evonne Medlock, 59, to take him from the home to go shopping for toys. Neither have been seen in person since then, although investigators are working on some leads thanks to camera footage.

Zechariah is described as a black male, who is 3-foot-5, about 60 to 70 pounds, and was last seen wearing a gray sweats with black and white shoes.

Medlock is described as a black female, 5-foot-6, medium build, with corn rows, according to the Smith County Sheriff's Office. She was last seen wearing a black T-shirt, baggy khaki pants, and a light brown plaid jacket, according to Railsback. She does not have a permanent address but frequents the Overton and Kilgore areas. She also frequents the Valero convenience store in Overton. She drives a black 2007 Jeep Wrangler 4-door with plates RVZ5847, according to Christian.

Authorities believe Zechariah could be in danger due to Medlock's mental state, Christian said during a press conference Monday morning. Law enforcement in Rusk, Gregg and Smith counties report Medlock has used narcotics in the past and has possible mental health issues. The family didn't speak out about any mental or drug issues and had no red flags about Medlock until Monday morning, according to Smith County Sgt. Jason Railsback.

"Just to be clear, we don't believe at this time that Ms. Medlock would harm the child," Christian said. "It's more of a circumstantial thing that she could get him in the middle of, especially if she does have some sort of an episode, and even with that past narcotic use, I don't know what her mindset would be."

According to Christian, Zechariah's birthday was just a few days ago and the family said Medlock wanted to buy him some presents. This wasn't an odd occurrence, as Medlock has been a friend of the family for several years and often spends time at the home. She's taken Zechariah shopping before, helped with homework, and other basic things, according to Railsback, who leads the Crimes Against Persons Unit at the sheriff's office.

Still camera footage places Zechariah and and Medlock at the Troup Highway Walmart in between the hours of 2:30 and 3:30 p.m. Sunday, just about 12 hours before the child was officially reported missing to law enforcement. Footage shows the pair walking into the store at 2:41 p.m. and also walking out together after shopping and purchasing toys.

Footage shows the two walking around the store with normal mannerisms, according to Railsback, who said Walmart saw no red flags in the interactions and said Zechariah didn't appear to be scared or in distress at that time.

Camera footage also provided a photo of the black Jeep, which Smith County Sheriff's Office said is the suspect vehicle, in the Walmart parking lot. Additionally, the vehicle was spotted around 5:30 p.m. Sunday in Kaufman County heading west toward Dallas on Interstate 20.

"We're looking heavily in the Dallas area right now," Railsback said. "Child Protective Services, FBI Tyler and FBI Dallas, and the National Center for Missing and Exploited Children (are all involved). We're using all available resources at this time and doing everything we can to look for this child."

An AMBER Alert, which identifies Medlock as the suspect, was issued by the Texas Department of Public Safety around 7 a.m. Monday morning. Because Zechariah has gone out with Medlock in the past and she's a close family friend, his guardians had no reason to worry and didn't want to think of the possibility he could be missing until they contacted law enforcement around 3 a.m. Monday.

"The family had no reason to not let (Zechariah go with Medlock or doubt she'd bring him back, Railsback said. "Them going out wasn't uncommon."

But as the day went on and they still hadn't heard from Medlock, who doesn't have a cell phone, or seen the pair return to the Overton home, family began to worry.

"I believe it was one of those things where they didn't think it could happen to them, so they were waiting for time to pass and eventually the grandson would return, that turned out to not be the fact, they stayed up 'til about 3 in the morning waiting on this to happen and decided to call law enforcement to get us involved," Railsback said.

The investigation is ongoing, the department said.

Zechariah is a pre-K student at Arp ISD, according to the district.

“We have alerted our entire school district community to be on the lookout and are asking for prayers for his safe and prompt recovery,” said Mike Alzamora, Arp ISD spokesperson.

If you have any information as to the whereabouts of Zechariah or Medlock please call 9-1-1 immediately or the Smith County Sheriff’s Office at (903) 566-6600.

AMBER Alerts inform the public of serious child abductions, in an effort to promote tips and leads to law enforcement, according to Texas DPS. In memory of the tragic death of Amber Hagerman, the letters of her name can be seen within the title of the program, America’s Missing: Broadcast Emergency Response (AMBER).

AMBER Alerts can only be issued if the missing persons case meets a certain criteria:

AMBER, Blue, Silver, Camo: What do all these alerts mean?