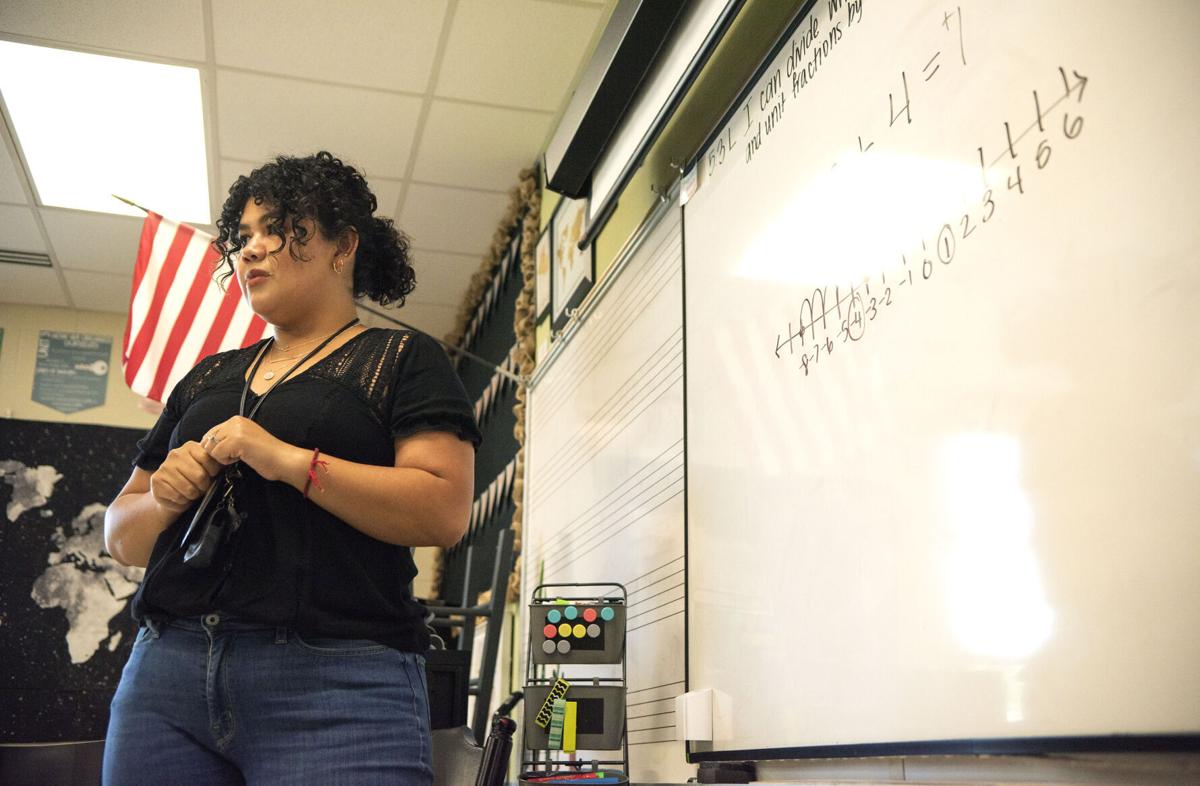 Bitia Saravia teachers her fifth-grade bilingual class at J.L. Everhart Magnet Elementary School in Longview. Saravia, 34, came to the United States from El Salvador at age 2. She’s a participant in the Deferred Action for Childhood Arrivals program but is looking for permanent citizenship. 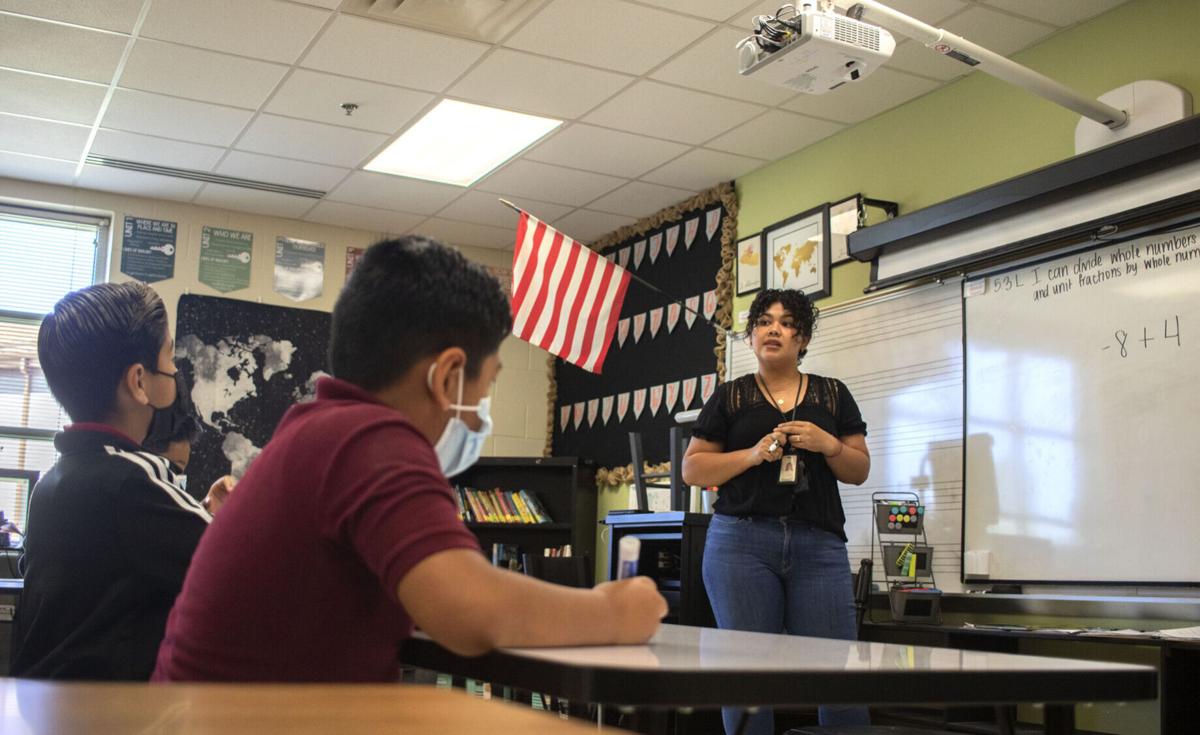 Bitia Saravia teachers her fifth-grade bilingual class at J.L. Everhart Magnet Elementary in Longview. Saravia, 34, came to the United States from El Salvador at age 2. She’s a participant in the Deferred Action for Childhood Arrivals program but is looking for permanent citizenship. 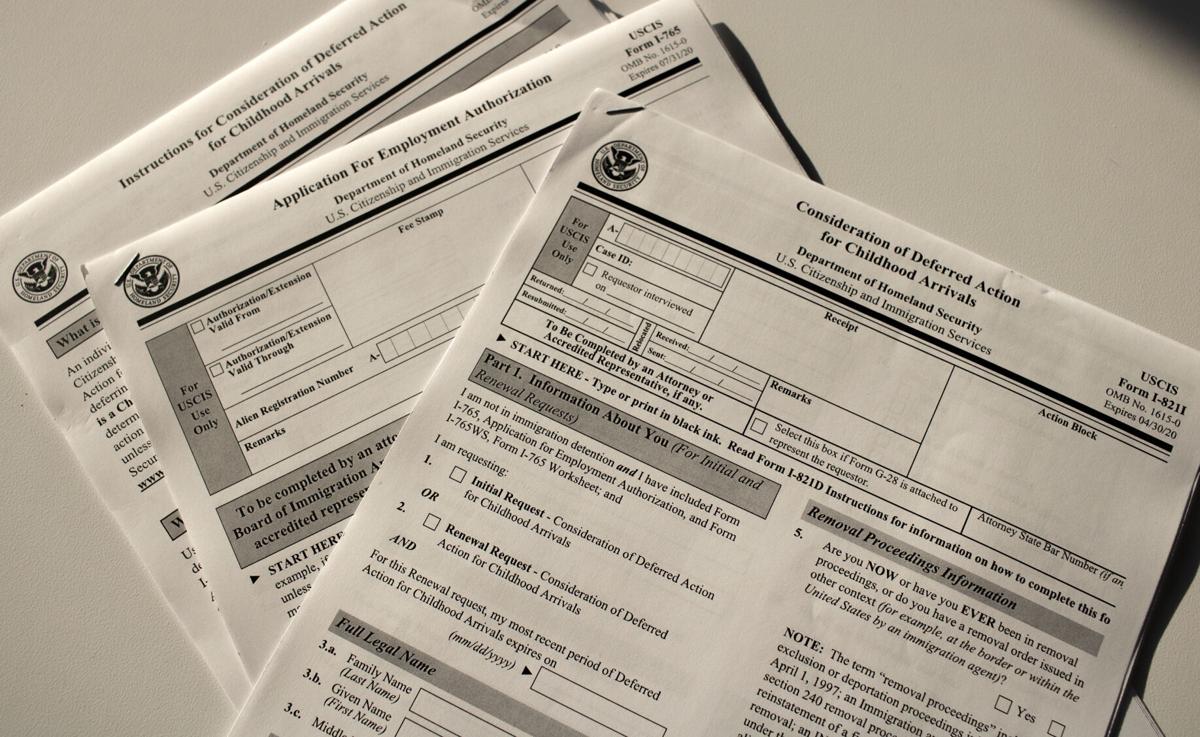 Deferred Action for Childhood Arrivals program recipients must submit these forms and pay an application fee of $495 every two years. 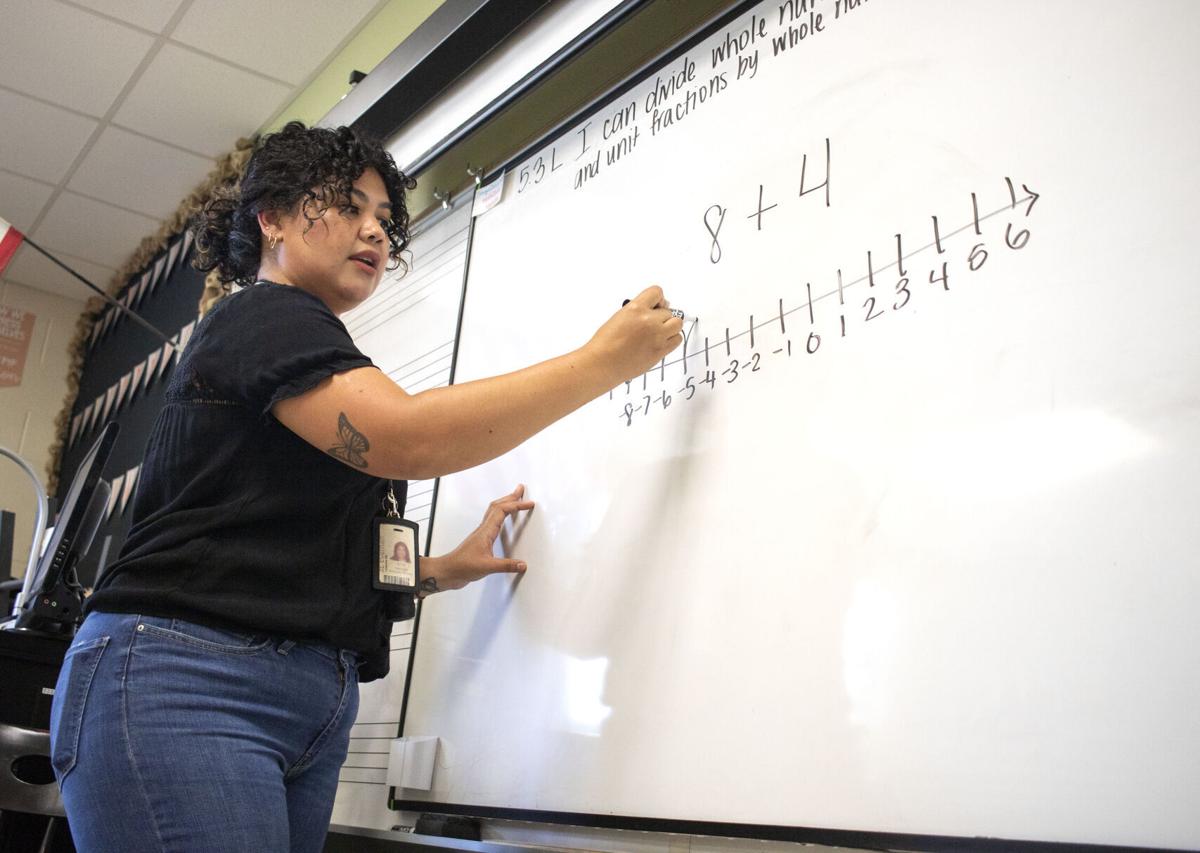 Bitia Saravia teachers her fifth-grade bilingual class at J.L. Everhart Magnet Elementary in Longview. Saravia, 34, came to the United States from El Salvador at age 2. She's a participant in the Deferred Action for Childhood Arrivals program but is looking for permanent citizenship. 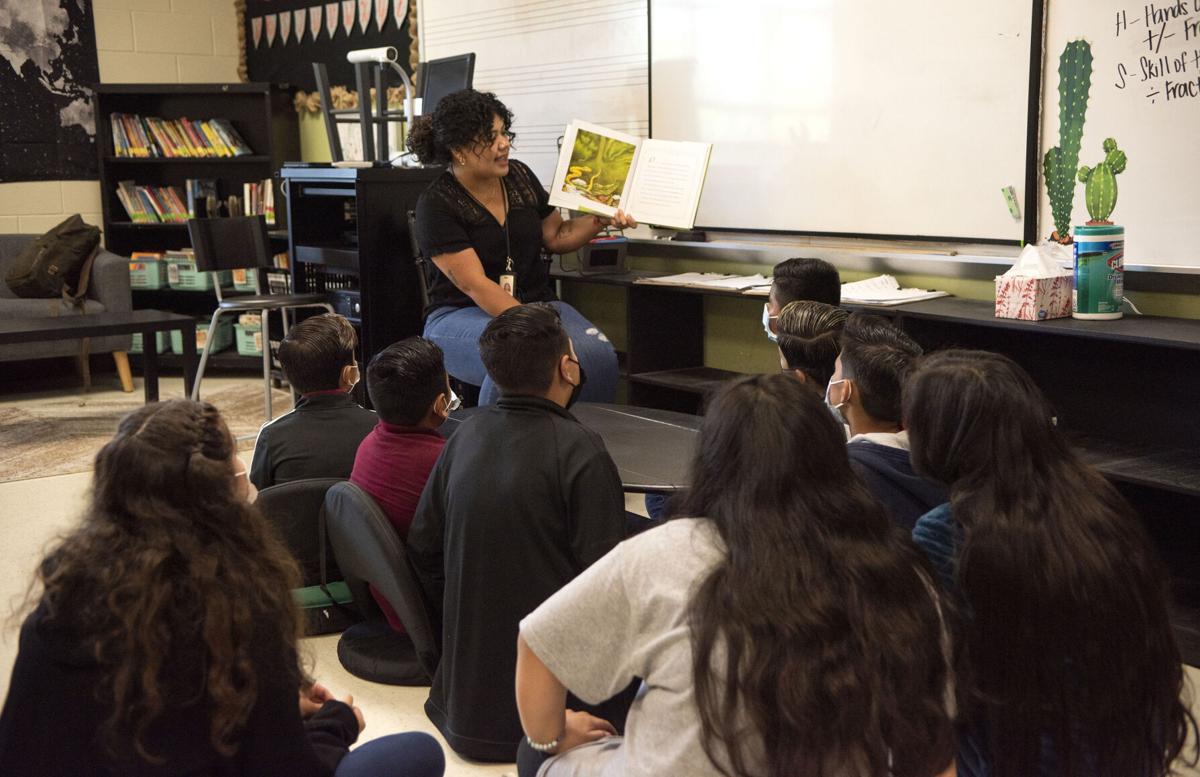 Bitia Saravia teachers her fifth-grade bilingual class at J.L. Everhart Magnet Elementary School in Longview. Saravia, 34, came to the United States from El Salvador at age 2. She’s a participant in the Deferred Action for Childhood Arrivals program but is looking for permanent citizenship.

Bitia Saravia teachers her fifth-grade bilingual class at J.L. Everhart Magnet Elementary in Longview. Saravia, 34, came to the United States from El Salvador at age 2. She’s a participant in the Deferred Action for Childhood Arrivals program but is looking for permanent citizenship.

Deferred Action for Childhood Arrivals program recipients must submit these forms and pay an application fee of $495 every two years.

Bitia Saravia teachers her fifth-grade bilingual class at J.L. Everhart Magnet Elementary in Longview. Saravia, 34, came to the United States from El Salvador at age 2. She's a participant in the Deferred Action for Childhood Arrivals program but is looking for permanent citizenship.

A longtime Longview teacher who came to the United States from El Salvador — a country she hasn’t seen since she was a toddler — is facing possible deportation as part of her quest for citizenship.

Bitia Saravia, 34, arrived here at age 2 in the late 1980s with her family, who escaped the war and violence of the Central America nation.

Saravia initially was granted Temporary Protected Status (TPS) because of the dangerous conditions of her home country.

In 2012, however, she applied for and eventually became part of the Deferred Action for Childhood Arrivals (DACA) program. DACA provides temporary relief from deportation and offers work authorization to young undocumented immigrants who are accepted into the program.

But DACA doesn’t provide permanent legal status and must be renewed every two years. (A federal judge in Texas ruled Friday that the program is illegal and ordered the Biden administration to stop granting new applications, according to The Texas Tribune. However, the judge’s order won’t affect current DACA recipients who have the two-year renewable work permits.)

Saravia calls her participation in the DACA program a Band-Aid.

And although she married a U.S. citizen, which creates a pathway for her to apply for citizenship, that route would require her to return to El Salvador for as many as 10 years.

Saravia is hoping the American Dream and Promise Act, which passed the U.S. House earlier this year, wins approval in the Senate and provides a better route for her to become a citizen.

Saravia grew up in Houston and said she didn’t really understand that she was undocumented until high school.

“All my friends were getting driver’s licenses and I couldn’t,” she said. “They were getting jobs and I didn’t.”

As her friends began exploring options for life after high school, it became a question of, “Can I even go to college?”

She said opportunities began to open up for her after she was grated Temporary Protected Status, and she was able to get a job at age 17.

However, Saravia eventually lost her protected status because of a clerical issue involving her attorney. She said she already had enrolled at the University of Texas at Tyler at that time and was working as a server at a restaurant.

In 2009, she graduated from UT Tyler with a bachelor’s degree in education and interdisciplinary studies, but as an undocumented immigrant, she knew she couldn’t find a job in the career she wanted.

“Obviously I was very grateful I had a job, but it was very depressing working in a job that wasn’t what I felt was my calling,” she said. “It wasn’t what I wanted to do with my life. I felt very much limited and stuck.

“I’ve been taught this is the American dream — the land of opportunity — and to love a country so much that you don’t feel loves you back was just a really dark moment,” Saravia said.

In 2012, the DACA program was created, and Saravia was accepted into it a year later. She then was hired in Longview ISD and has been teaching there since.

“I honestly can’t imagine not being able to be a teacher. This job has allowed me to provide for my family,” she said.

Saravia could become a citizen through her marriage, but because she lived in the United States as an undocumented immigrant for a period of time, applying for citizenship in that manner is not the preferred way. The penalty for being undocumented in the U.S. for more than a year requires the applicant to return to his or her home country for up to 10 years. And in some instances, the applicant may not have permission to ever return to the United States.

“That’s why we haven’t wanted to explore my husband petitioning for me, because (going back to El Salvador) is a requirement,” Saravia said. “I’m hoping that, if they create a pathway to citizenship for dreamers, it wouldn’t require us to go back to our country to do that.”

“I have my family here,” Saravia said of the United States. “This is the only place I’ve ever known. We have two kids. It would greatly affect our family in a positive way if the (American Dream and Promise Act) does get passed.”

The bill would provide “dreamers,” holders of Temporary Protected Status and those with Deferred Enforced Departure (DED) with protection from deportation and an opportunity to obtain permanent legal status if they meet certain requirements. Protections in the legislation would allow as many as 2.3 million dreamers brought to America as children, including nearly 700,000 DACA recipients, to stay in the U.S.

“I’m about to start my ninth year teaching this fall, and I’ve had hundreds of students, and I love them dearly,” Saravia said. “I think about, ‘What if I never had the opportunity to never have these kids in my life?’ “

She said she has had difficult conversations with her family.

“These are the conversations I have to have with my 6-year-old daughter,” Saravia said. “I have to tell her that this is a possibility, and it’s important for me that my daughter understand that, if I ever left this country, it wasn’t by choice, that if I ever left her with her dad behind, that I wasn’t choosing to abandon her, that it wasn’t my choice.

“It would be a separation. It would be me going to El Salvador and my husband and kids being here. Me becoming a citizen would take away that dark cloud of a possibility that I wouldn’t be with my family.”

Saravia said she often hears misconceptions that DACA recipients are still children. Today, a large number of them are adults who contribute to society and pay taxes.

“They think that we’re here to take when we’re here to give,” she said. “We pay into a system we can’t take out of. We pay taxes to a government that I can’t vote in. I get no say in who represents me, but their vote affects my everyday life, so I don’t get a say in that.”

She also said there is a common misconception about people who come from foreign countries. She often hears they want to come to the United States to replicate the bad things that are happening in their home countries, but in reality, those immigrating from places such as El Salvador have come to the U.S. to escape those experiences.

“We want to make our communities better, we want to live a peaceful life here. We’re not here to cause trouble. I feel like we give so much more to our communities than we’re allowed to take,” Saravia said.

Saravia said when she finally gains citizenship said would be most excited to vote and travel.

The American Dream and Promise Act faces an uphill battle in the Senate, however.

Sen. John Cornyn, R-Texas, said recently on the floor of the Senate that the legislation fails to address the ongoing immigration crisis at the U.S.-Mexico border.

“This legislation stands zero chance of passing the senate — zero. It combines some of the most radical proposals from the far left in one massive bill that fails to address the needs of our country,” Cornyn said.

And in a July 6 letter to Senate Judiciary Committee Chairman Dick Durbin, D-Ill., Cornyn and Sen. Thom Tillis, R-N.C., requested the committee schedule a meeting for a bill to “offer permanent legal status to only currently enrolled and activate participants in the Deferred Action for Childhood Arrivals program,” according to the Center for Immigration Studies.

Cornyn and Tillis, in the letter, said “there is no clear and politically viable path forward” for the American Dream and Promise Act and that a narrower bill is more viable, the Center for Immigration Studies reported. The senators asked Durbin to allow committee members to offer “reasonable” amendments to the bill, including “proposals related to border security, interior enforcement, and employment verification programs.

“(Such) a process will allow us to develop a package that can garner the support necessary to pass on the Senate floor.”