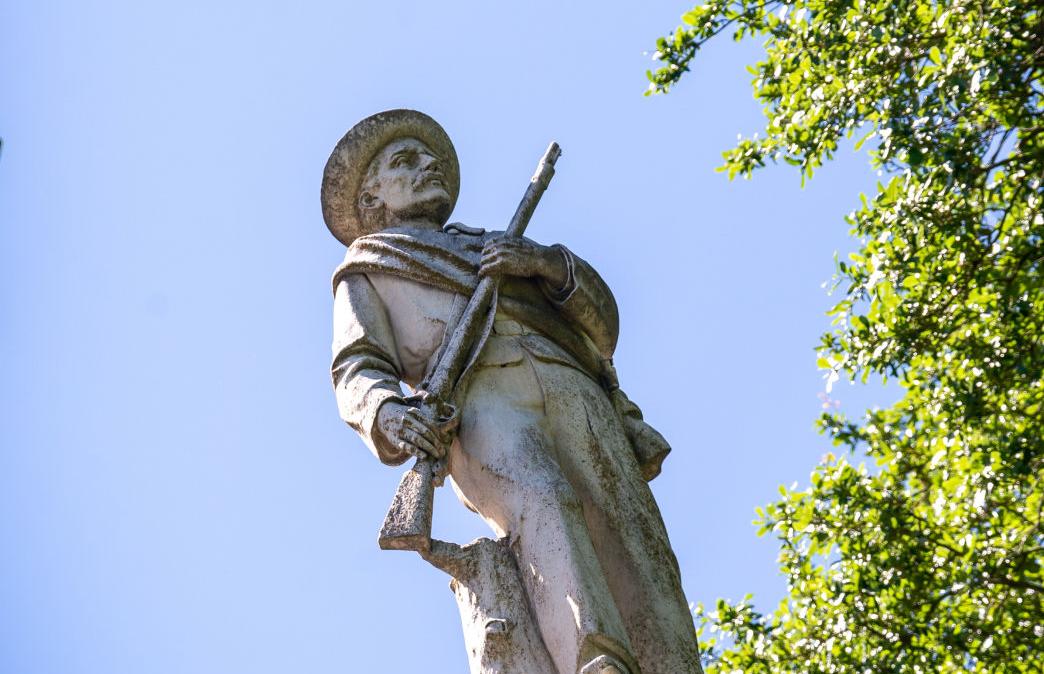 A monument to Confederate soldiers is shown outside the Gregg County Courthouse on Thursday. 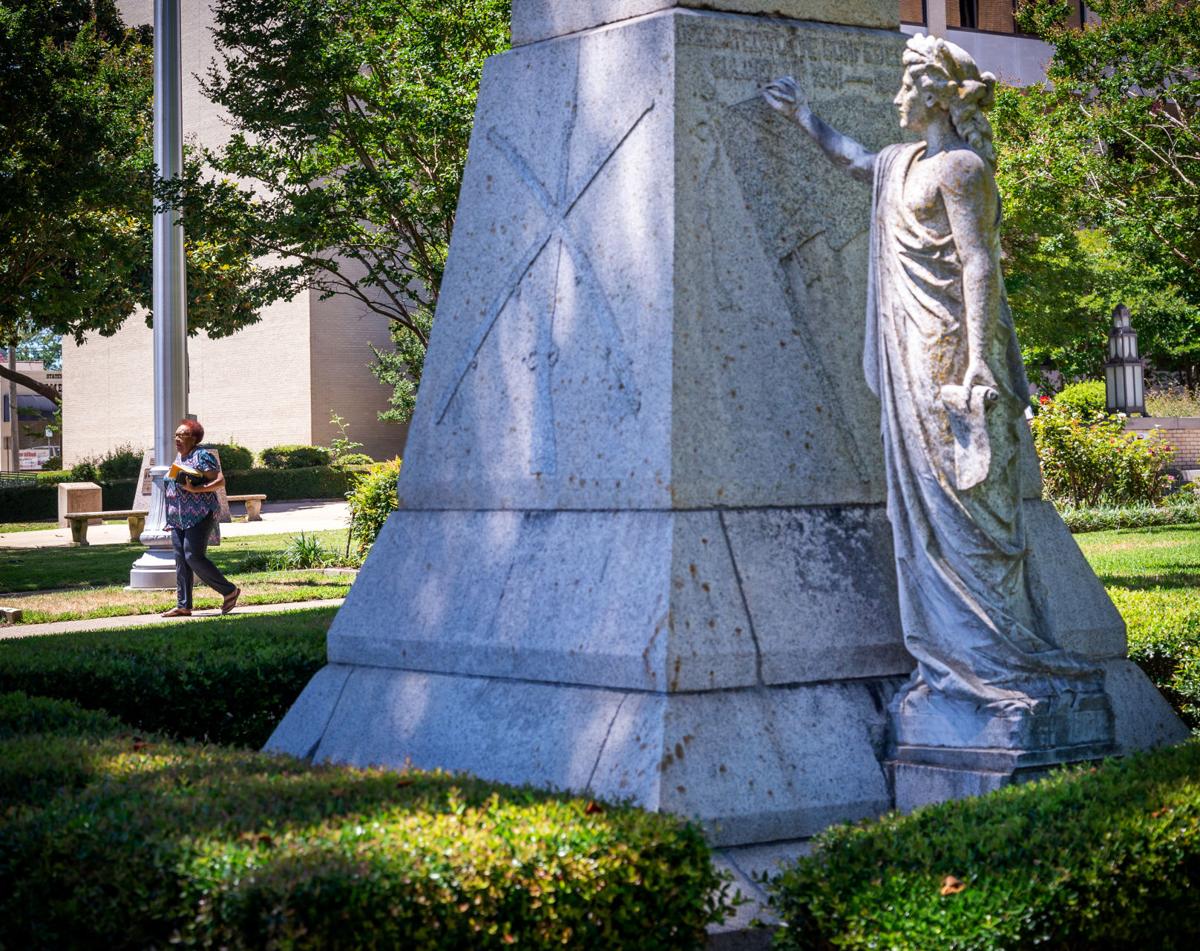 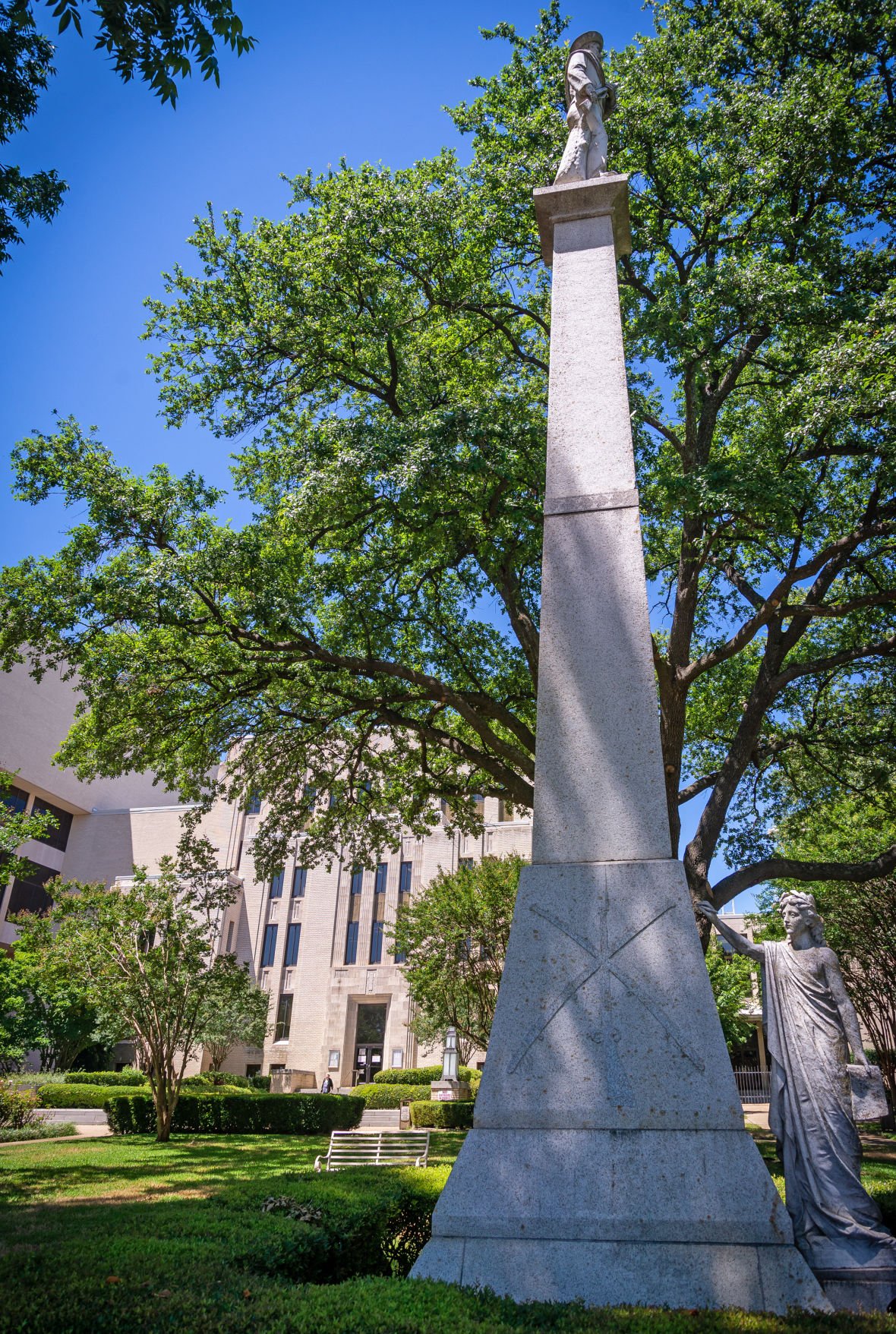 A monument to Confederate soldiers is shown outside the Gregg County Courthouse on Thursday.

For Chelsea Laury, removing a Confederate monument from the lawn of the Gregg County Courthouse is not about rewriting or erasing history — it’s about her humanity.

As a young black woman, 18-year-old Laury of Longview said seeing a monument that honors Confederate soldiers is a painful reminder.

“Every time I see that flag, or that memorial, or statues, I think of people who believe that my people, my ancestors, my family, me should be ‘other’ human beings, should be enslaved just based solely on the color of their skin,” she said. “It makes me feel alienated in a way. It feels kind of intimidating, to be honest, to have this huge statue of a confederate soldier looking down on you. If that person was real in front of me, they would think I’m a lesser human being than they were.”

She started a Change.org petition to have the statue removed. That petition had more than 600 signatures as of Thursday.

And a similar petition that had more than 120 signatures Thursday has been started by Debra Thorn of Longview on the website Care 2 petitions.

The call for the monument’s removal is part of a national uprising against Confederate statues and symbols that began after the death of George Floyd this past month while in police custody in Minneapolis.

On Wednesday night, protesters pulled down a statue of Confederate President Jefferson Davis in Richmond, Va., the former capital of the Confederacy, adding it to the list of Old South monuments removed or damaged around the country, the Associated Press reported.

And Thursday, Houston announced two statues that pay tribute to the Confederacy will be removed from its city parks, the AP reported.

In 1911, a monument that honors Confederate soldiers was dedicated in Longview, and in the 1930s, the statue was moved to the lawn outside the Gregg County Courthouse.

State Rep. Jay Dean, R-Longview, said Thursday that such monuments are a reminder of a dark period in America, but “we cannot rewrite history.”

“It reminds us of the hundreds of thousands of people that suffered greatly during this time, and it should serve as a reminder, not as a threat or any type of disrespect for any group of people,” Dean said. “Our county is named Gregg County. It was named after that person, so what’s next? I think we leave history alone, and we learn from history, and we continue to move forward as a county, as a state, as a country and understanding those historical markers and what they represent. They should remind us of a dark place we never want to go back to.”

Sam Mercer, a member of the Sons of Confederate Veterans, said the monument is “just another monument to American soldiers and, specifically, to Texas soldiers.”

He said he only is aware of two Confederate statues removed in Texas, and he was not aware of the petitions to remove the Gregg County monument.

“They’re trying to do away with history, and it’s not going to happen,” he said Thursday. “History’s history.”

Laury said the best outcome would be for the statue to be moved to a museum where people can learn “what not to do.”

“History repeats itself if you don’t know why things happen the way they did,” she said. “I think it’s a good idea to keep it in a public place like a museum but not in a place where people are always passing it.”

Longview District 2 Councilwoman Nona Snoddy, one of two black City Council members, also said Thursday that she believes the statue and what it represents could be in a better place, such as the Gregg County Historical Museum.

“That way people wouldn’t have to always walk by it conducting business at the courthouse,” she said. “As an African American, it’s not something I want to be reminded of all the time because it brings a lot of heartache and pain. I think moving it is something to be considered, not having it on the lawn where people walk by to conduct business every day.”

Dean said he doesn’t want the statue moved to the museum.

Lindsay Loy, executive director of the Gregg County Historical Museum, said there simply is not room for the monument in the facility.

Loy said she believes the monument could go to a Confederate history group in town or to Teague Park to be displayed with other veterans monuments. She just doesn’t want to see it destroyed.

“I hate that we’ve come to this as far as destroying monuments or defacing monuments,” she said. “I think a lot of this doesn’t really have anything to do with monuments. I think everyone’s angry, and they want to destroy things. But I think there’s a better place to put stuff. It is a piece of our history whether we like it or not.”

Snoddy said she has received several calls inquiring about moving the monument.

“I understand this started probably about three years ago,” she said, referring to violence during a 2017 white supremacist rally in Charlottesville, Va. “And I think at that time, for lack of support, it kind of died out. With the way things are now, people are ready to mobilize and take action against any form of racism.”

However, Dean said he has not received any calls from constituents about removing the monument, and Gregg County Judge Bill Stoudt said Thursday that he has received one request regarding moving the statue.

Removing the statue would require a vote by the commissioners court, Stoudt said.

If a resident wants to get an item on the court’s agenda, he could make a presentation during the public comment portion of a meeting and outline what he is interested in the court considering, he said.

If there is a petition related to the person’s interest, Stoudt said that presentation would be the time to give it to the court.

No decision would be made on the day of the comment, he said. The court would hear the presentation and consider voting on it at a later meeting.

The meeting schedule can be found at www.co.gregg.tx.us/commissioners-court-schedule .

Longview NAACP President Winsell Coleman said while removing Confederate statues can be a move in the right direction, it is a “cosmetic fix.”

“You can change statues, take down figures, but to me it’s a cosmetic fix,” he said. “People can make laws and legislate, but you can’t actually legislate the way people feel about things. Legislation is important, removing the statutes is important, but they’re cosmetic, because a lot of time it doesn’t change the heart of the people bringing the racial attacks to begin with.”

Coleman said wars still are happening between races because they were never actually resolved.

“For example, civil rights laws passed int the 60’s, but you can’t legislate the changes of people’s hearts and actions,” he said. “This is 2020, and the racial problems here are just as rich as in the 60’s. It takes time and it takes a spiritual change.”

To resolve racism, Coleman said people of all races have to come to the table for a civil conversation with each other.

“I see people that are called white that are beginning to get involved, and they’re coming to the table, they’re starting to realize the police aren’t always right,” he said. “So that’s what it’s going to take. People have to get away from these cosmetic fixes. The reality is, it’s going to take people that have the power — white people — they’re going to have to come to the table. And I want to give credit where credit is due, more white people are coming to the table.”

Laury said she believes society is more connected than it’s ever been. She said she has done a lot of research on all sides of the issue to reach her conclusion that the statue should be removed.

“This isn’t just about my feelings, I really, strongly believe, based on evidence from numerous sources, that the Confederacy should not be honored — it should be discouraged,” she said.