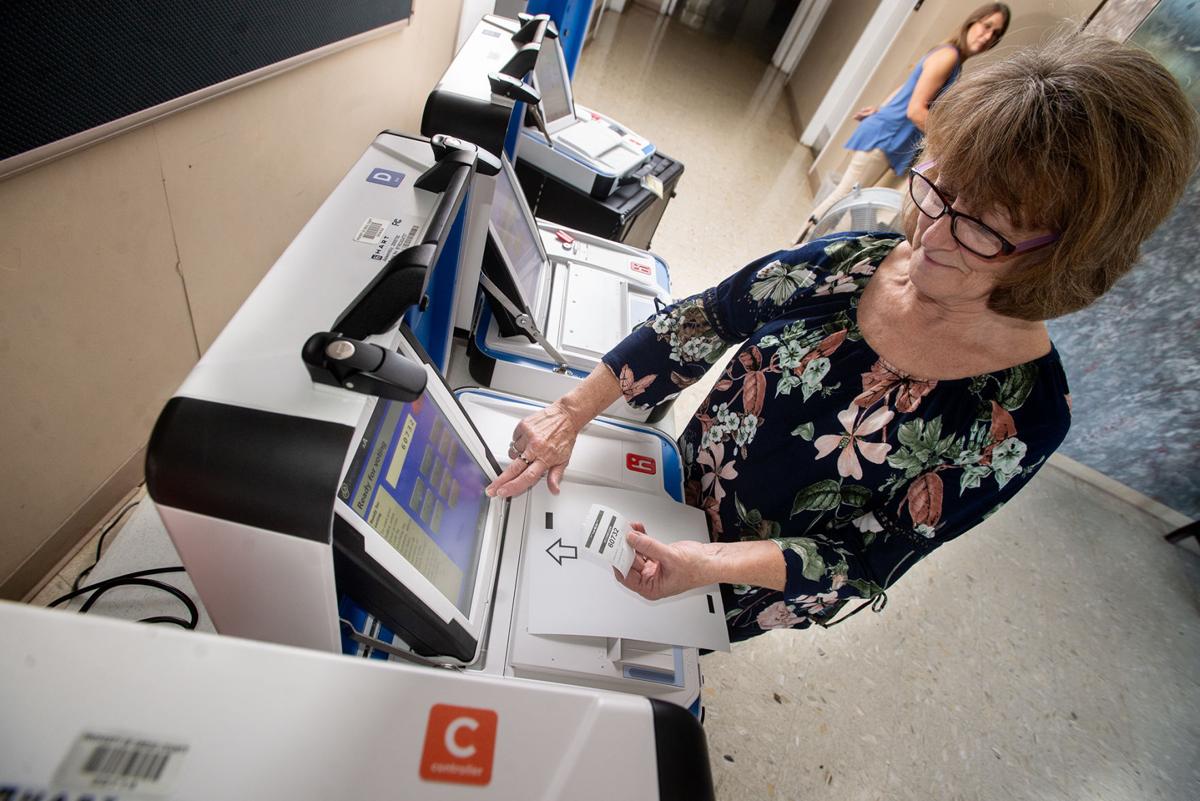 Gregg County Elections Administrator Kathryn Nealy demonstrates how to use Gregg County’s new voting machines in October during the first of four planned “come-and-go” voting machine learning sessions.The first session was at the Kilgore Community Center, while others will be at Longview locations, including a session from 5:30 to 7 p.m. Thursday at Judson Community Center, 1129 FM 1844. The reliabilty and security of tools like these is being called into question as U.S. intelligence officials warn that malicious meddling in this year’s presidential contest could be worse than in 2016. 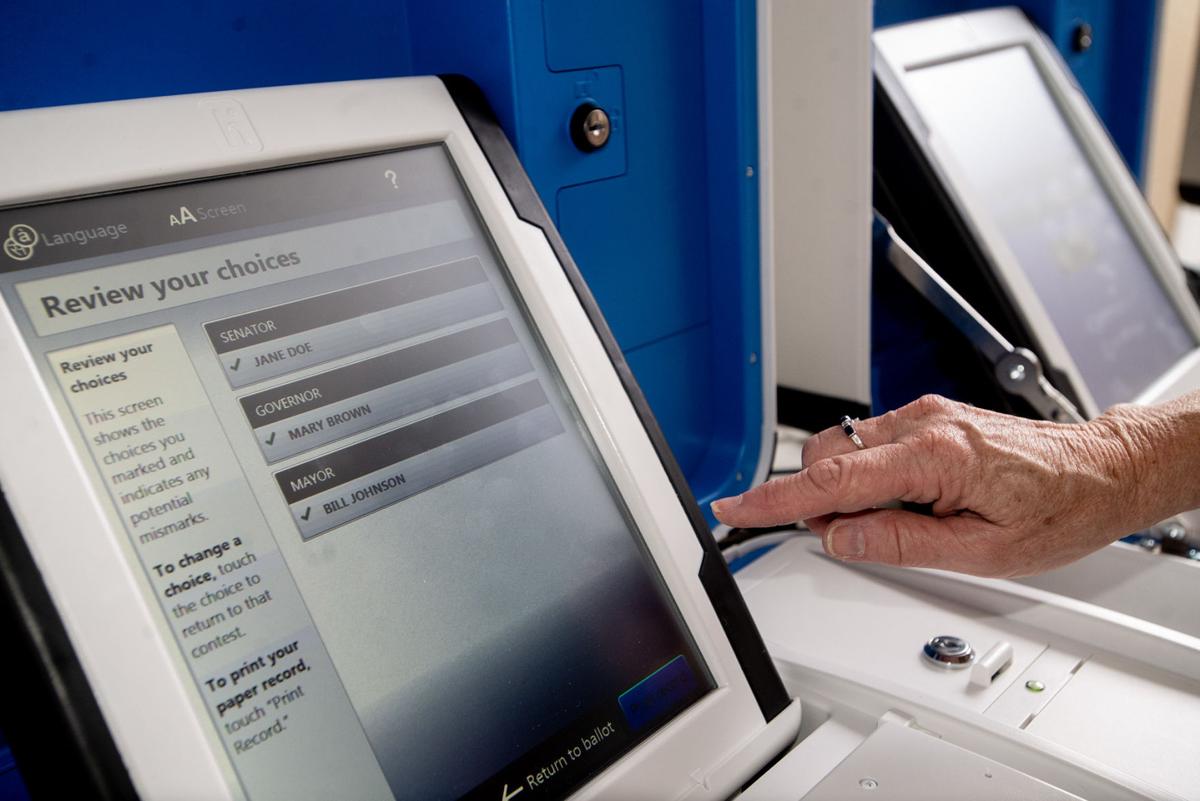 Gregg County Elections Administrator Kathryn Nealy demonstrates how to use Gregg County’s new voting machines in October during the first of four planned “come-and-go” voting machine learning sessions.The first session was at the Kilgore Community Center, while others will be at Longview locations, including a session from 5:30 to 7 p.m. Thursday at Judson Community Center, 1129 FM 1844. The reliabilty and security of tools like these is being called into question as U.S. intelligence officials warn that malicious meddling in this year’s presidential contest could be worse than in 2016.

Almost one in five U.S. voters will cast ballots this year on devices that look and feel like the discredited paperless voting machines they once used, yet leave a paper record of the vote. But computer security experts are warning that these so-called ballot-marking devices still pose too much of a risk.

Ballot-marking machines were initially developed not as primary vote-casting tools but as “accessible” alternatives for the disabled. They print out paper records that are scanned by optical readers that tabulate the vote.

They cost at least twice as much as hand-marked paper ballots, which computer scientists prefer because paper can’t be hacked. That’s an important consideration as U.S. intelligence officials warn that malicious meddling in this year’s presidential contest could be worse than in 2016.

Such devices are used in East Texas counties, including Rusk and Smith, according to an Associated Press review.

And although the AP review did not include Gregg County, a previous description of how the county’s new voting machines operate is similar to what concerns security experts.

Gregg County purchased the Verity Duo Voting System this past year from Hart InterCivic of Austin for $1.1 million.

Deputy Elections Administrator Jennifer Briggs said previously, in describing how the machines work, that after a voter finishes casting his or her ballot, the system prints a record of the vote. Once the paper is printed, the voter takes the paper to a final machine, which make an optical digital scan of the text on the paper exactly as it was entered.

The machines have been vigorously promoted by the trio of privately held voting equipment vendors that control 88 percent of the U.S. market and are nearly unregulated at the federal level. They are expected to be used by some 40 million eligible voters more than in the 2018 midterm elections.

Key counties in the crucial swing states of Pennsylvania, Ohio and North Carolina, much of Texas, California’s Los Angeles County and all of Georgia and Delaware have bought ballot-marking machines. So has South Carolina, which will use them in Saturday’s primaries.

Some of the most popular such devices, from Election Systems & Software and Dominion Voting Systems, register votes in bar codes that the human eye can’t decipher. That means skilled hackers could alter outcomes without detection, gaming bar codes while keeping voters’ intended choices on the human-readable portion of the ballot printout, computer scientists have found.

ES&S claims such tampering is “a practical impossibility.”

Spokeswoman Katina Granger said the company’s ballot-marking machines’ accuracy and security “have been proven through thousands of hours of testing and tens of thousands of successful elections.” Dominion declined comment for this story.

Even on machines that don’t use bar codes, voters may not notice if a hack or programming error mangles their choices. A University of Michigan study determined that only 7 percent of participants in a mock election notified poll workers when the names on their printed receipts didn’t match the candidates they voted for.

“There are a huge number of reasons to reject today’s ballot-marking devices — except for limited use as assistive devices for those unable to mark a paper ballot themselves,” says Doug Jones, a University of Iowa election security expert.

Critics say currently available ballot-marking devices undermine the very idea of retaining a paper record. It’s an idea supported by a 2018 National Academies of Sciences report that favors hand-marked ballots tallied by optical scanners, which 70 percent of U.S. voters used in 2016 and 2018 and will again rely on in November. It is a stance also shared by Colorado, a national leader in election security. The state is banning bar codes from ballot-marking voting machines beginning in 2021.

But some election officials see ballot-marking devices as improvements over paperless touchscreens, which were used by 27 percent of voters in 2018. They like them because the touchscreens are familiar to voters, looking and feeling like what they’ve been using for nearly two decades, and they can use one voting method for everyone.

“When we give them a paper ballot, the very first thing they say to us is, ‘We’re going back in time,’” he said.

First, a ballot programming error prevented votes cast for one of three candidates in a judge’s race from registering in the bar codes used to count the vote. Only absentee ballot votes registered electronically for the candidate. A manual recount of the paper voting records settled the election.

The other problem: miscalibrated touchscreens on about a third of the county’s 320 machines.

One poll judge called the touchscreens “garbage,” and some voters who registered complaints in emails obtained by The Associated Press in a public records request said their votes were assigned to the wrong candidates — an error known as “vote-flipping.” Others worried about future malfunctions triggering long lines.

According to state certification documents, voters require triple the amount of time on average to navigate ES&S ballot-marking machines when compared with filling out hand-marked ballots and running them through optical scanners.

“What we worry is, what happens the next time if there’s a programming bug — or a hack or whatever — and it’s done in a way that’s not obvious?”

But New York State election commission co-chair, Douglas Kellner, an early critic of paperless electronic voting machines, said he’s confident in a ballot-marking device, the ImageCast Evolution by Dominion, certified for use in his state.

He said safeguards built into the machines and security protocols make a hack of the Image Evolution “extraordinarily unlikely.”