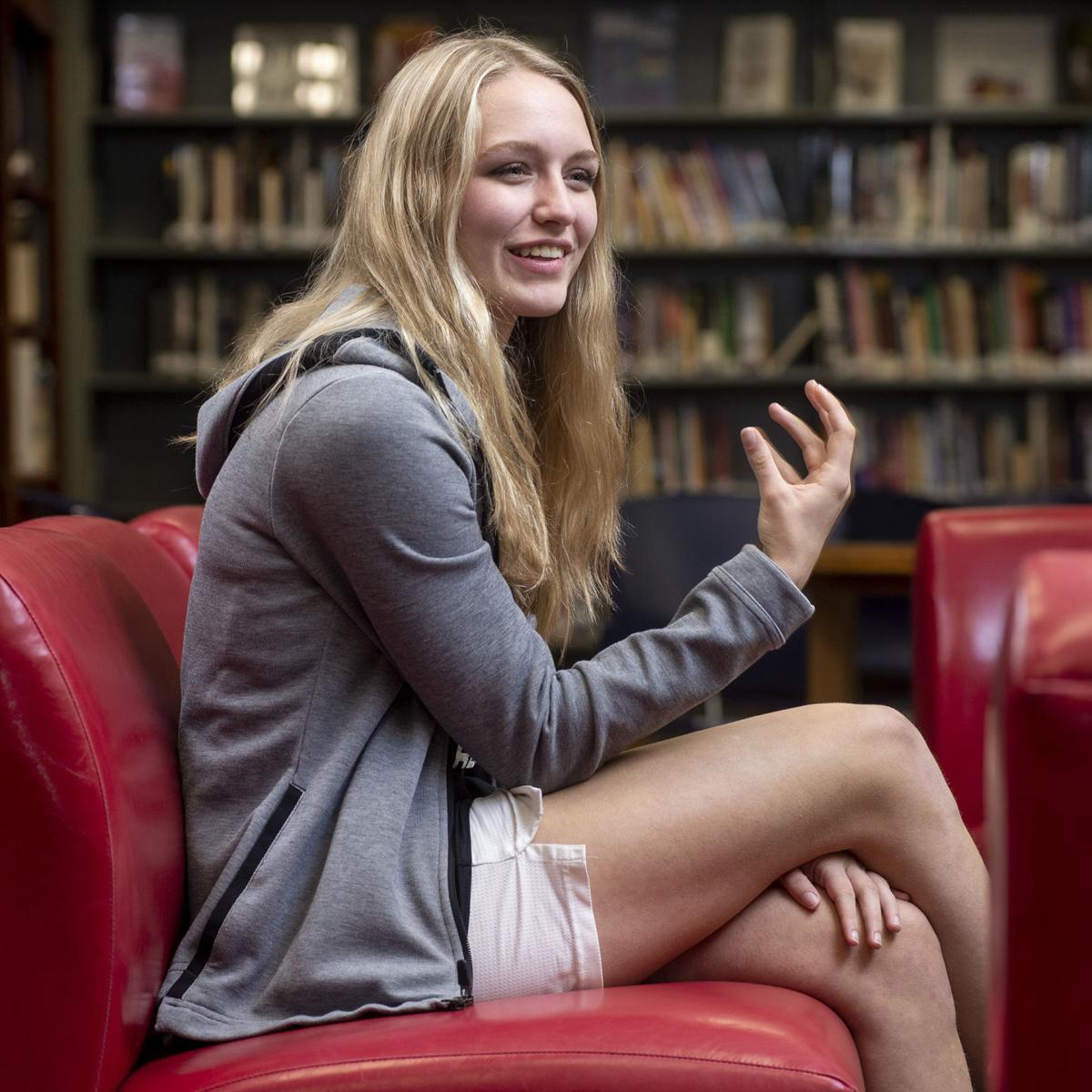 Sabine High School senior Halyn McKenzie speaks Monday about being accepted into Yale University and earning a full scholarship. McKenzie is the first student from Sabine High School to be accepted to an Ivy League school, and she learned Monday that she had received a scholarship that will pay for her entire education — $77,525 a year. Michael Cavazos News-Journal Photo 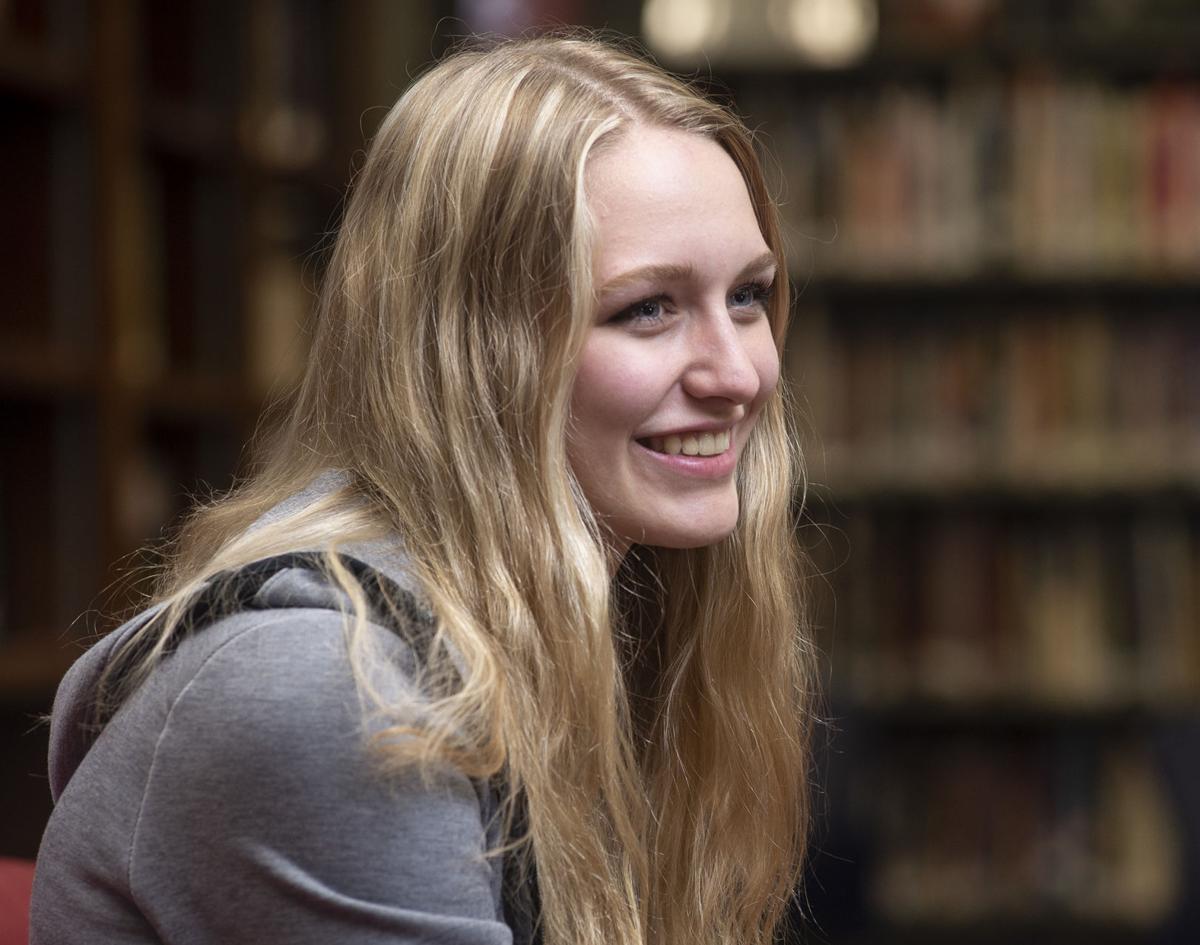 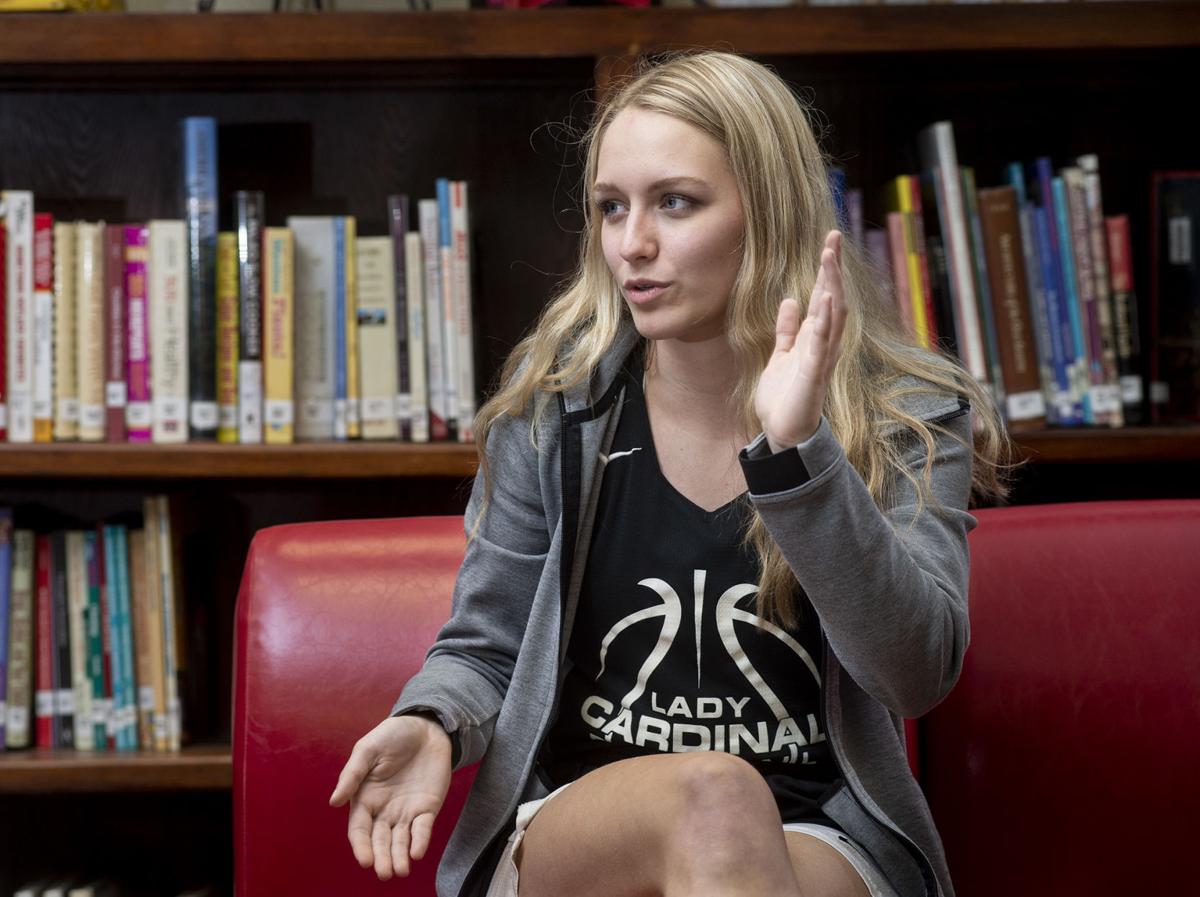 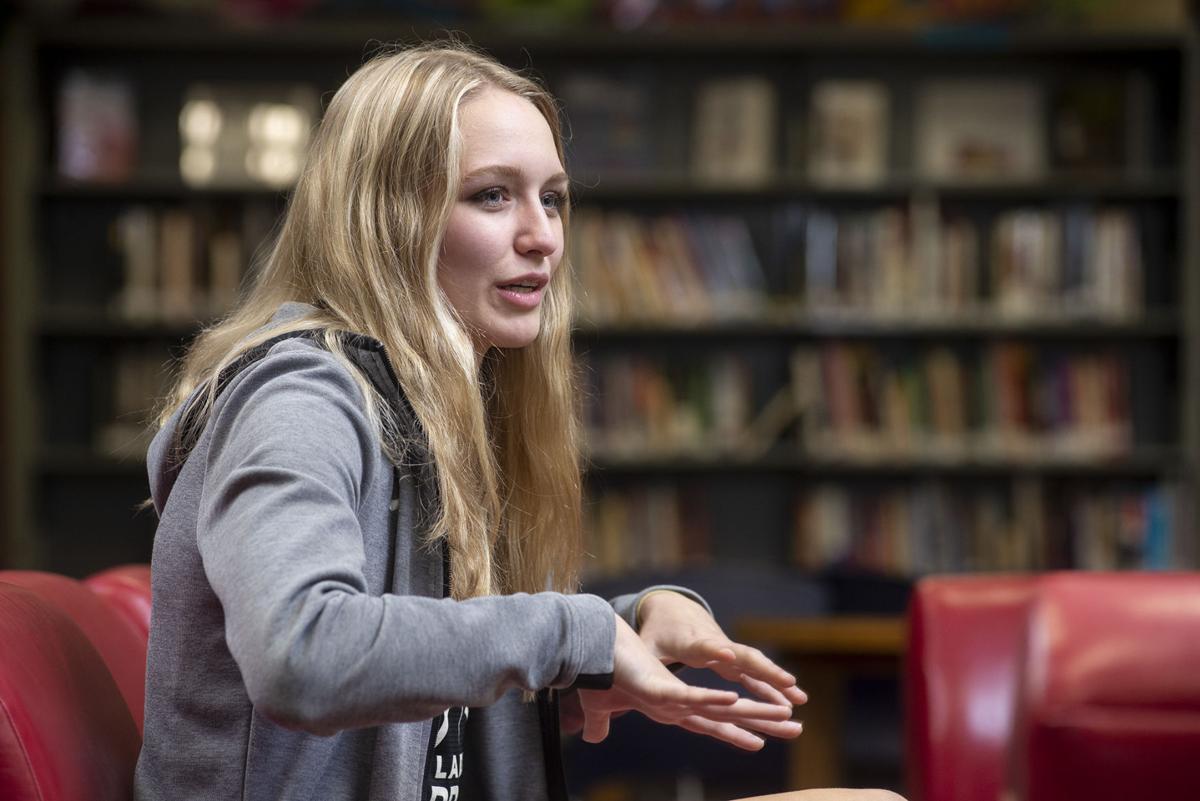 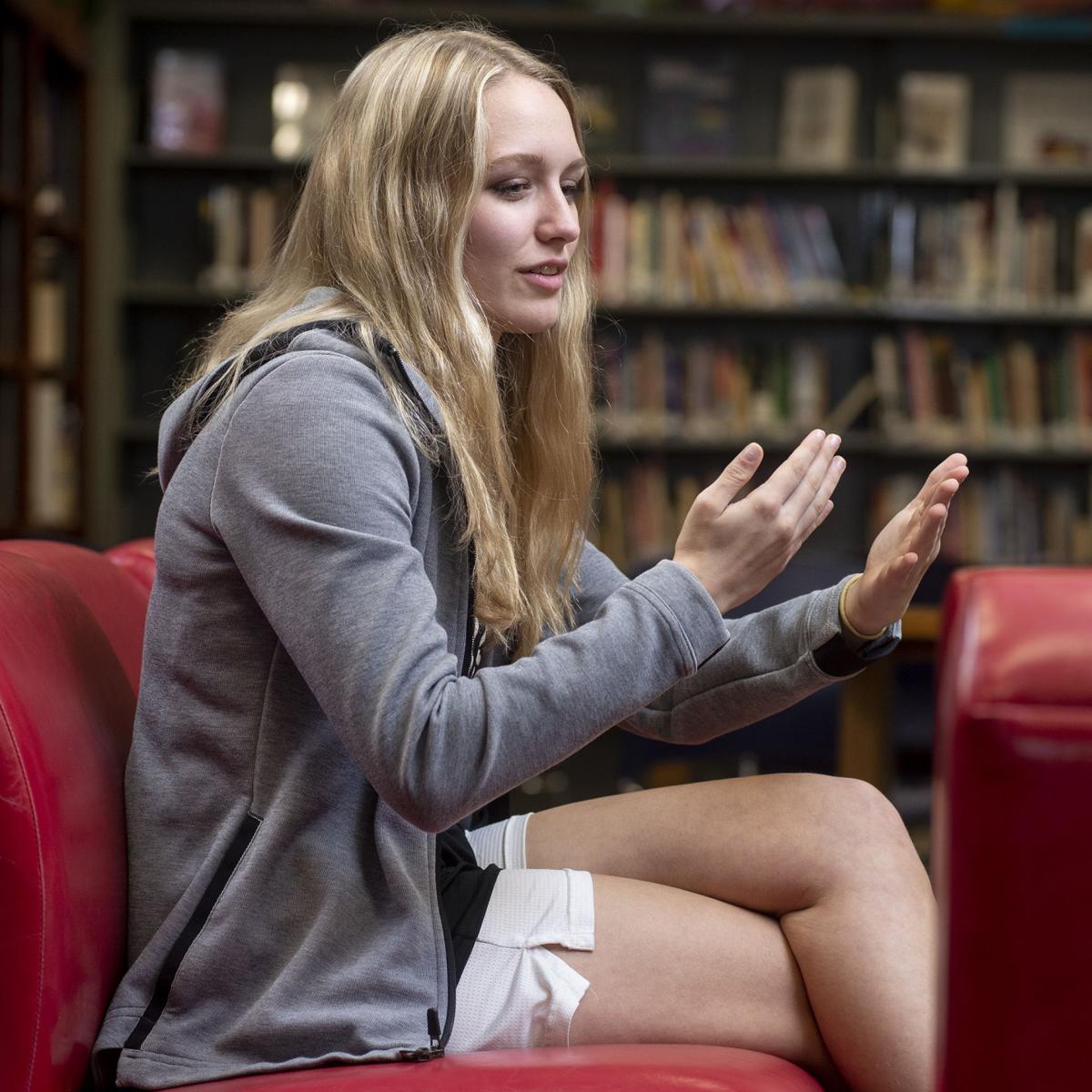 Sabine High School senior Halyn McKenzie speaks Monday about being accepted into Yale University and earning a full scholarship. McKenzie is the first student from Sabine High School to be accepted to an Ivy League school, and she learned Monday that she had received a scholarship that will pay for her entire education — $77,525 a year. Michael Cavazos News-Journal Photo

Halyn McKenzie has attended Sabine ISD since prekindergarten. The high school senior is proud of her education and her community, and she believes it is why she is going to Yale University in the fall.

McKenzie, 18, is the first student from Sabine High School to be accepted to an Ivy League school. She did not stop at acceptance; Monday morning, she found out she received a scholarship that will pay for her entire education from the university. She will receive $77,525 a year.

“When I first got in, (my parents) were excited, but my mom was nervous about distance and money,” McKenzie said Monday. “I actually found out about my scholarship (Monday) morning, and I called my mom in class. Now she’s ‘worry free’ is what she kept saying.”

Being the first student from her school accepted at Yale means a lot to her, McKenzie said.

“I’m so proud of where I come from; I know it’s such a small town — compared to Yale it’s, like, nowhere — to think that someone from around here is going somewhere like that. Even if it wasn’t me, I would be so excited,” she said. “I feel like I’m really grateful for the community I live in. I feel like they’ve impacted me so much. I would not be able to go there if it weren’t for my school and community.”

McKenzie said she plans to study environmental or chemical engineering. She said she wants to work with energy and preserving natural resources. She said her interest helped her with the interview process, because the Yale representative who interviewed her also studied energy.

The application process tested her writing and creativity, she said. Aside from a typical application essay, she also had to respond to questions in 25 words or less.

One was “if you were teaching a class at Yale, what would it be and why?” she said. She chose to write about a Nancy Drew computer game that she used to play, and focused on “female heroines in video games, and how they affect young women growing up, because that’s important to me, too,” she said.

Apart from an interview, the essays and the actual application, McKenzie showed she is a well-rounded student in her application.

She is on the basketball and golf teams. She is on the University Interscholastic League academic team, vice president of the Spanish Club, in National Honor Society, Fellowship of Christian Athletes and is a lifeguard.

Sabine High School counselor Angela Loveless said in a written statement that McKenzie is able to balance her responsibilities “effortlessly.”

“Halyn is an agile thinker with a strong work ethic,” Loveless said. “She is looked up to by many, including myself.”

McKenzie’s accomplishment will only help the school, Principal Monty Pepper said in a written statement.

“Halyn’s acceptance to Yale opens other students’ minds to their own possibilities,” he said. “The ‘what if’ factor comes into play in regard to what they might be able to accomplish. We are proud of her, but not surprised. She is talented, extremely bright and very motivated.”

McKenzie said she thinks sometimes people at rural schools might be discouraged from applying to an Ivy League school.

“They don’t think they can get into places like that, because it just seems so distant that would happen,” she said. “But really, what’s the reason of not applying? It’s worth the shot, no matter what. Even if you don’t get in, the worst thing is, you don’t get in. There’s plenty of other places.”