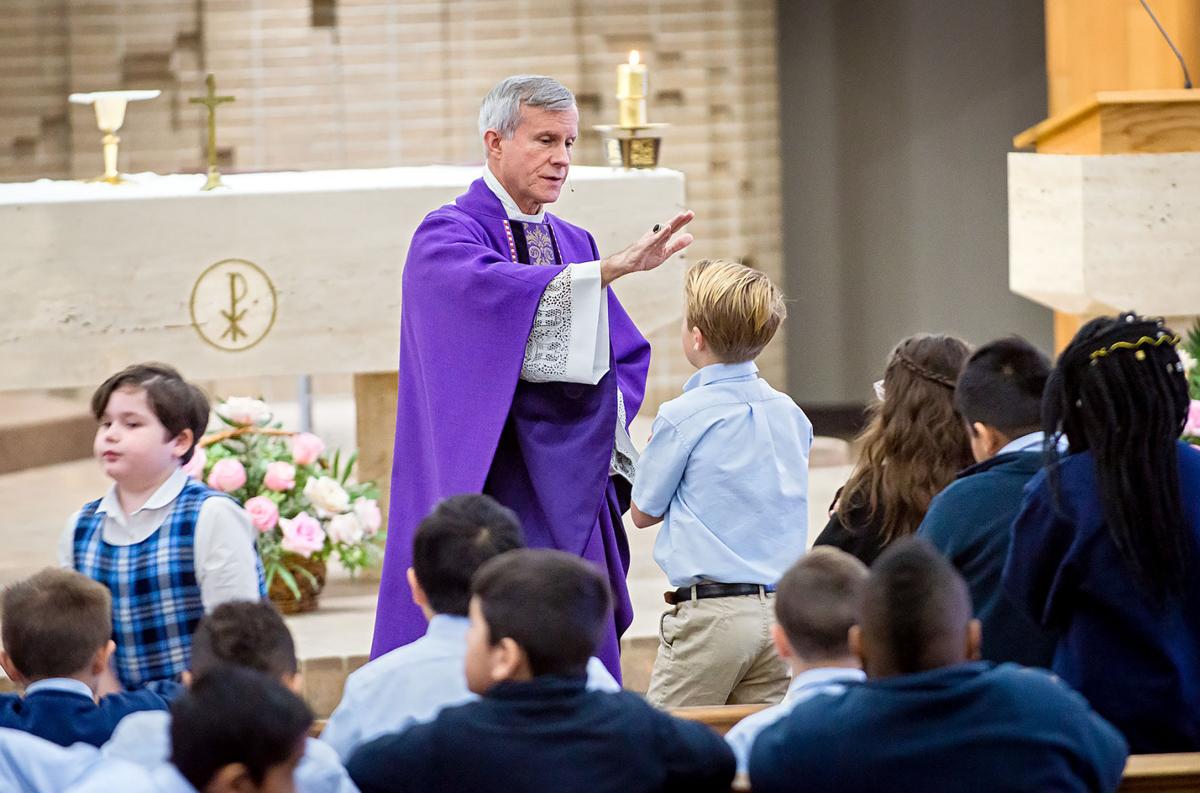 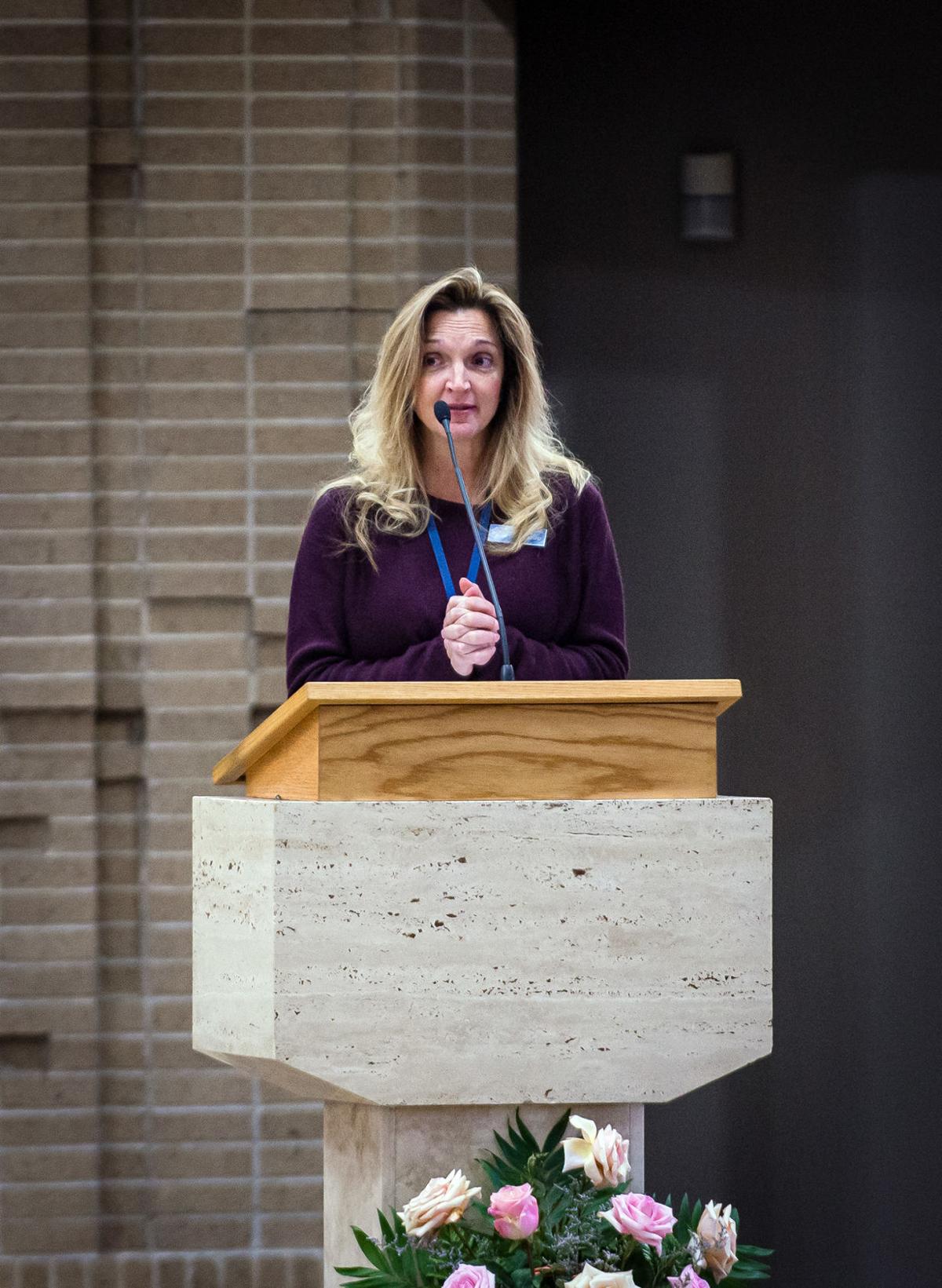 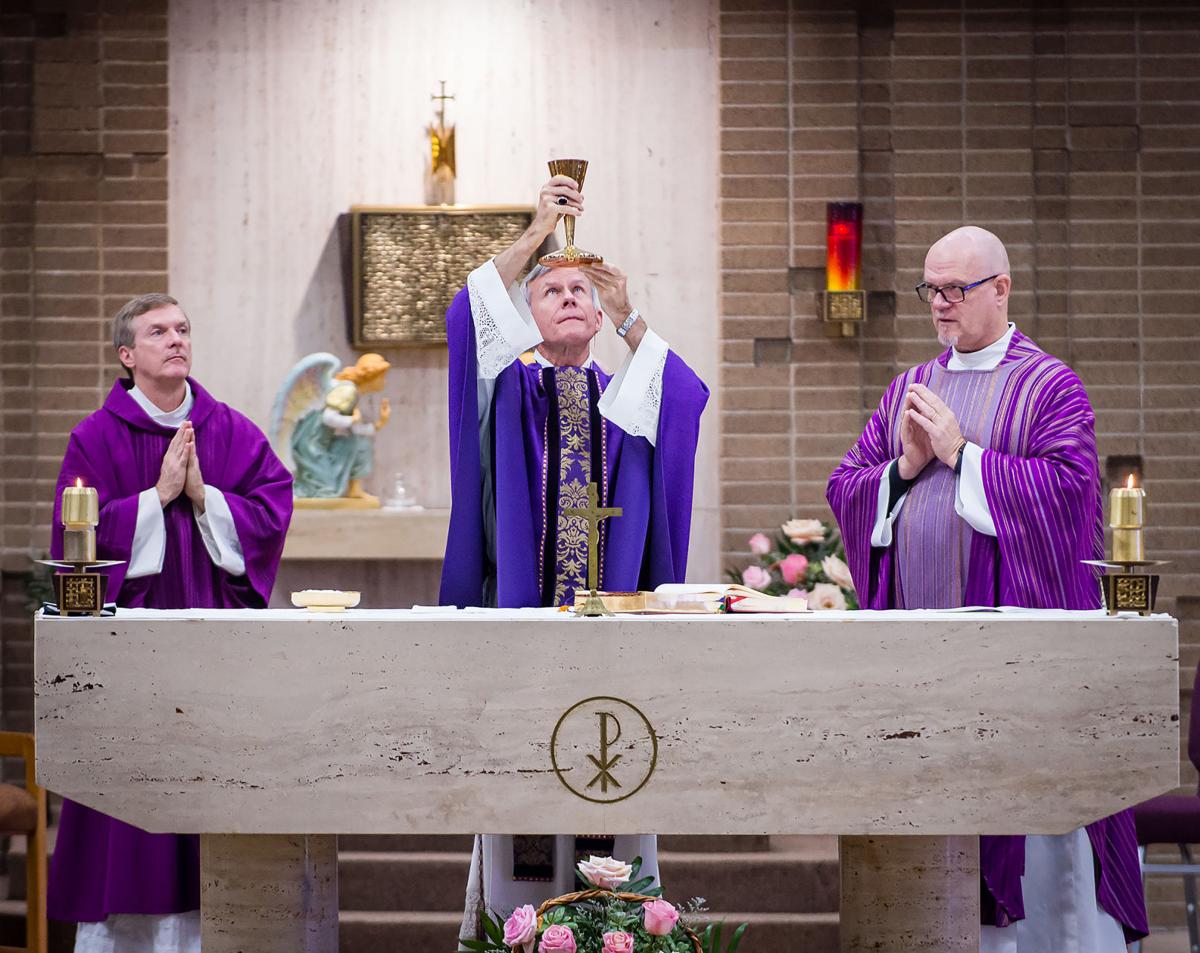 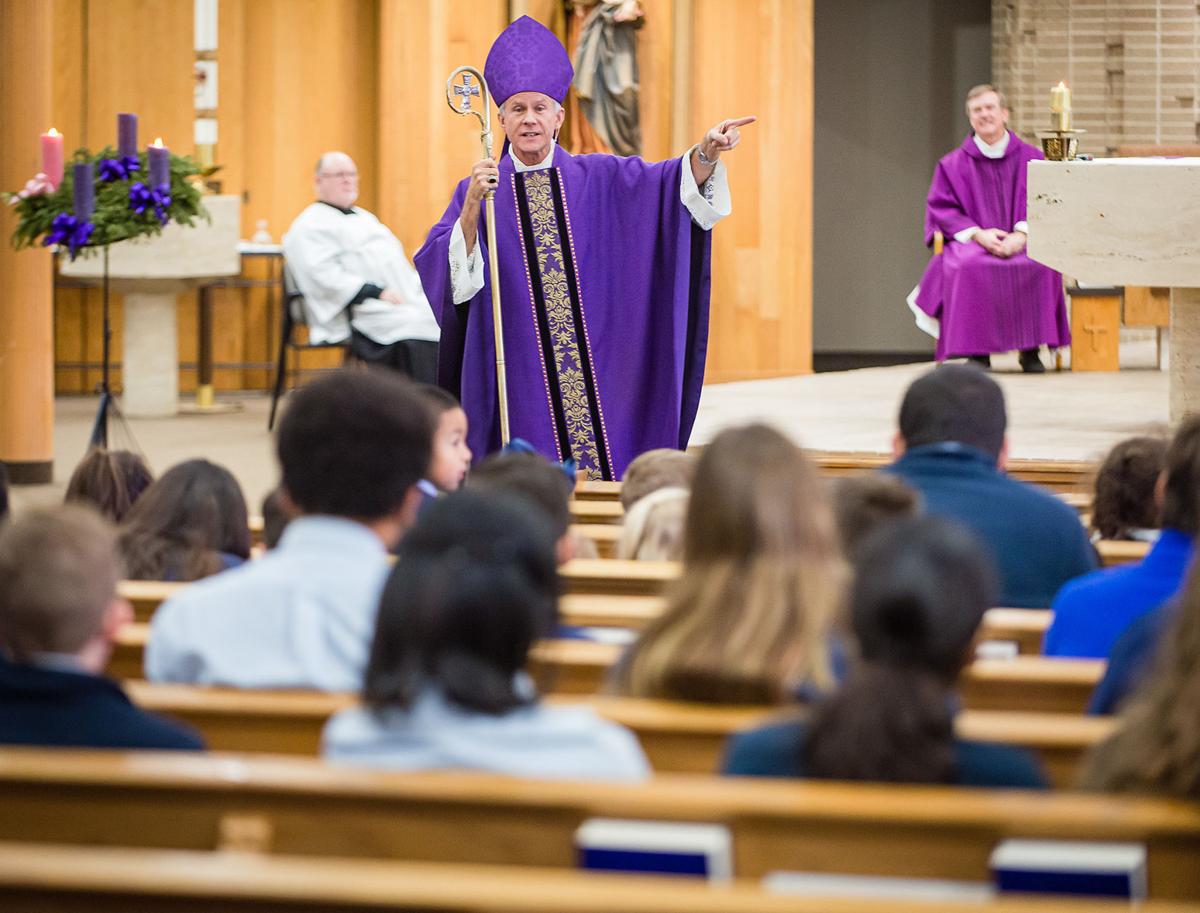 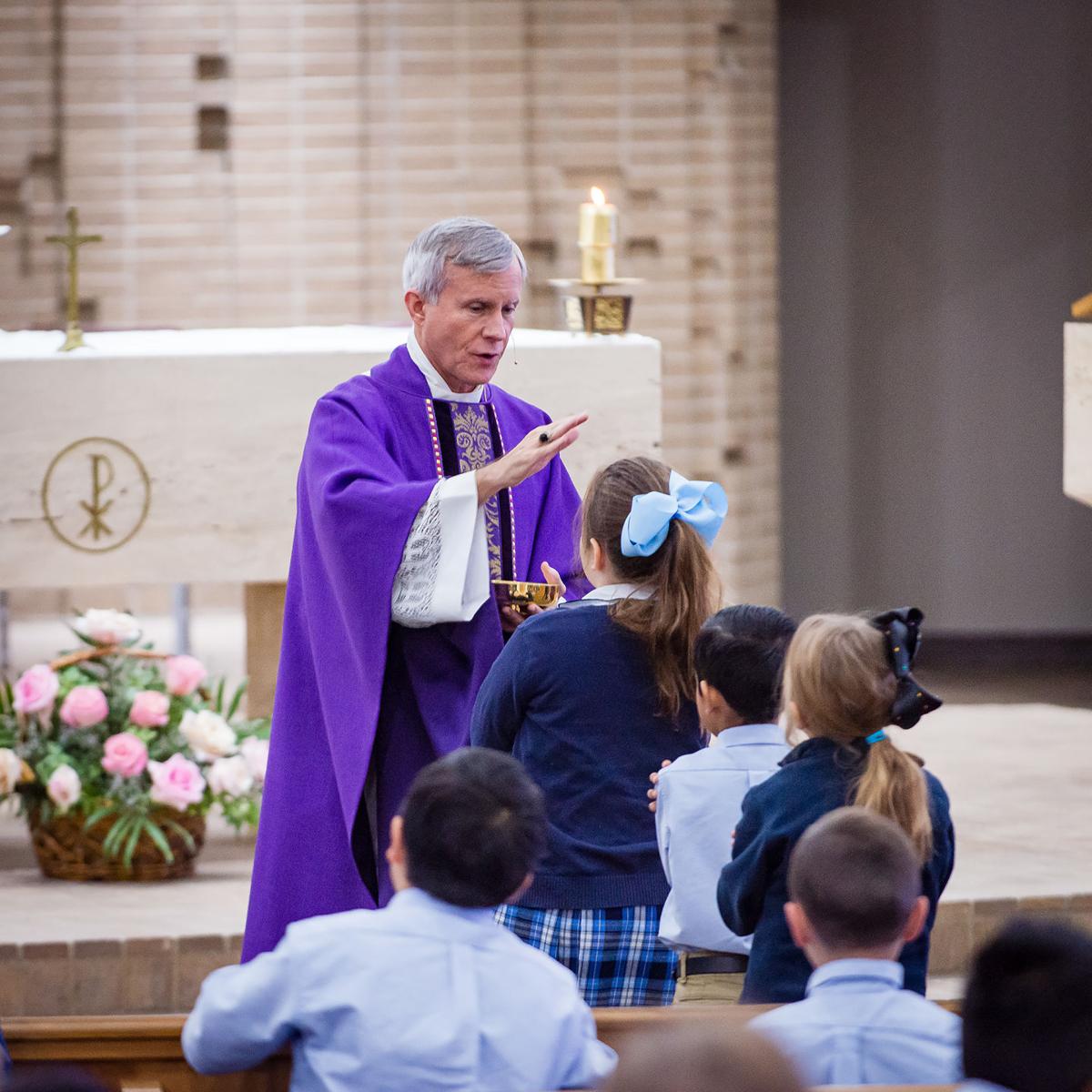 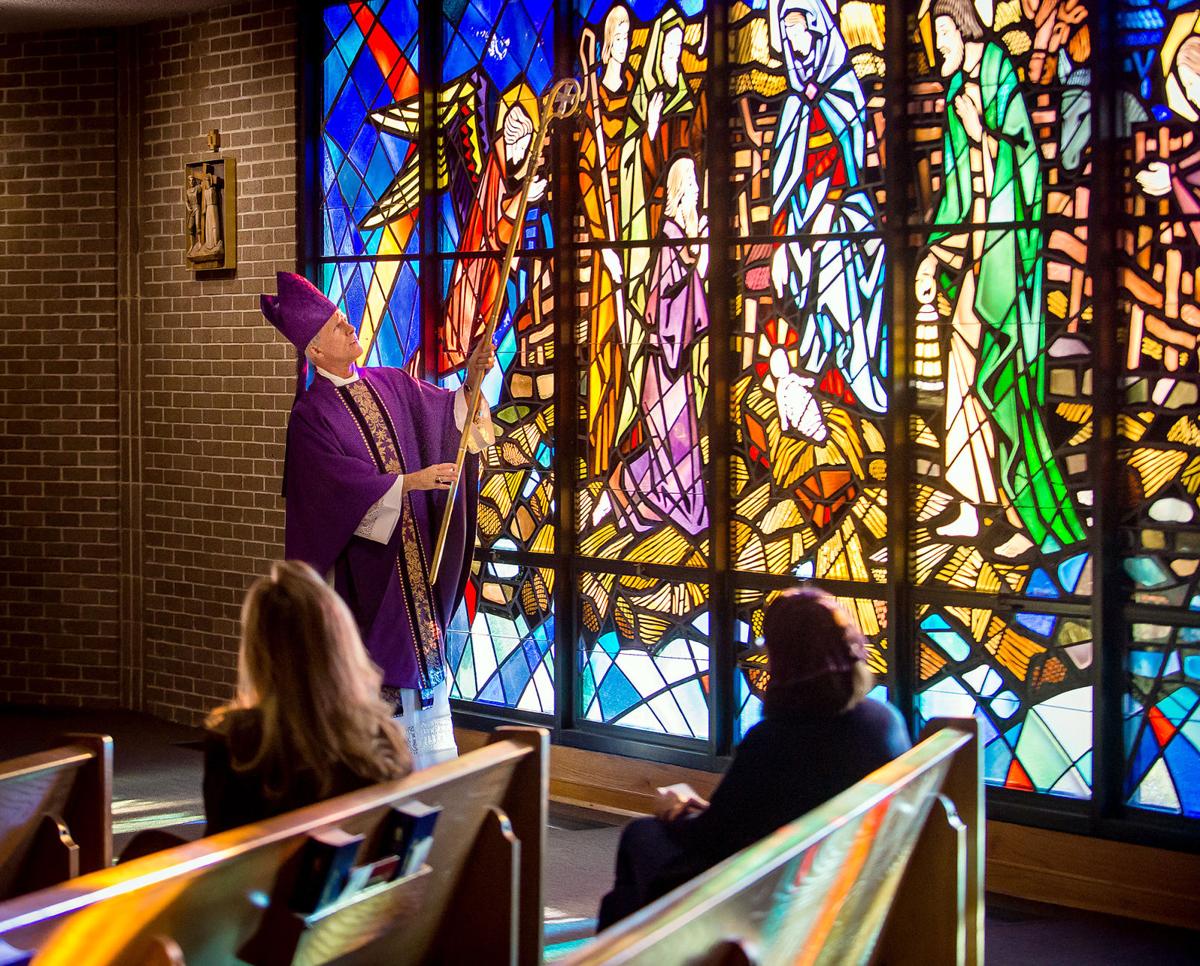 Diocese of Tyler Bishop Joseph Strickland uses a Nativity scene portrayed on a window as a teaching tool while speaking about Christmas before performing a Mass on Wednesday, December 18, 2019, at St. Mary’s Catholic Church. (Les Hassell/News-Journal Photo)

Diocese of Tyler Bishop Joseph Strickland uses a Nativity scene portrayed on a window as a teaching tool while speaking about Christmas before performing a Mass on Wednesday, December 18, 2019, at St. Mary’s Catholic Church. (Les Hassell/News-Journal Photo)

“I think one of the great things about St. Mary’s, and all of our Catholic schools, is that they evangelize,” he said. “They reach out to the wider community with service projects, with raising funds for the poor, with collecting food for the hungry, just those kinds of things that remind us of what the Gospel calls us to do.”

Those efforts, and other factors, have earned the school a national recognition.

Principal Darbie Safford announced Wednesday after the school’s weekly Mass that the school has been accepted into the Catholic Education Honor Roll by the Cardinal Newman Society. She also announced the school received a $25,000 grant from the Westerman Foundation.

According to its website, the Catholic Education Honor Roll is a national program that recognizes schools committed to strong Catholic identity.

Safford said only about 300 schools are part of the honor roll. The application process took about a year. The school was evaluated internally by staff and externally by the Cardinal Newman Society.

Safford said the school is accredited by the Texas Catholic Conference of Bishops Education Department and Advanced Ed. She said those honors give the school “secular validation,” but the Catholic Education Honor Roll puts the school at a more elite level.

Strickland, who celebrated Mass with the school and spent the day on campus, said the honor roll acceptance indicates the school is fulfilling its purpose.

“A Catholic school is supposed to bring the tradition of the Catholic faith, the message of the good news of Jesus Christ, in every aspect of their education in the school,” he said. “It’s a great honor for the school, and a great support to the work of the Diocese, that the Catholic school, St. Mary’s here in Longview, has been recognized as one of those throughout the nation that is doing what a Catholic school should do in upholding that Catholic identity.”

Safford has been the principal at St. Mary’s for almost a year. Strickland said the distinction is partly a result of her work at the school.

The Westerman Foundation grant will allow the school to purchase technology for the classrooms, Safford said.

According to its website, the Westerman Foundation is an organization that distributes grants for Catholic education.

The school will get Apple TVs with an iPad for every classroom, Safford said. The technology will allow the teachers to have interactive displays on the white board. Teachers will be trained on the technology to create more interactive classrooms.

Safford said purchases will start in the upcoming weeks. The goal is to have some of the purchases up and running by mid-January.

The grant and honor roll distinction help the campus with its purpose, she said.

“We’re here for one purpose, and that is to make saints of students, to help them to follow in Jesus’ footsteps,” Safford said. “We look at all sorts of different aspects of education — whole-child education. It’s not just about academics, although our academics are very strong. It’s about who our kids are as people, and who we’re turning out into the world. And what we hope we’re doing is, we’re turning out moral decision-makers that can go out into the world and solve problems.”