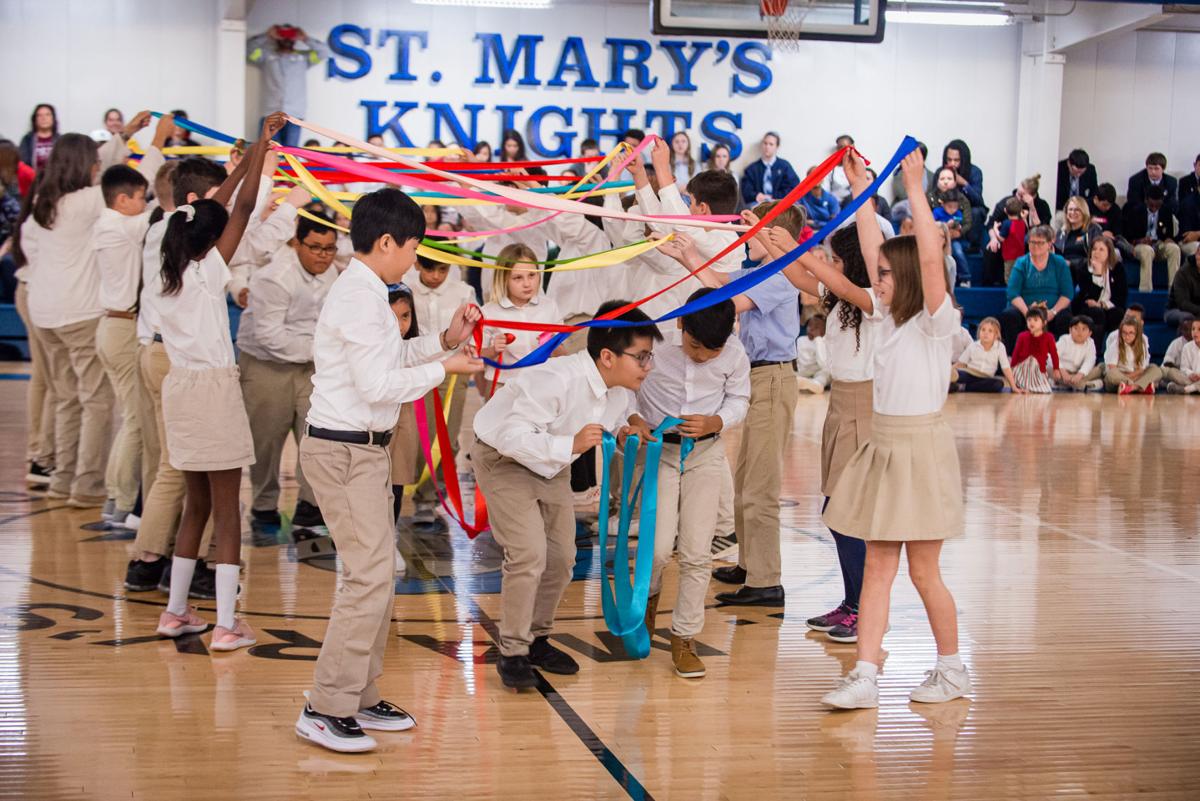 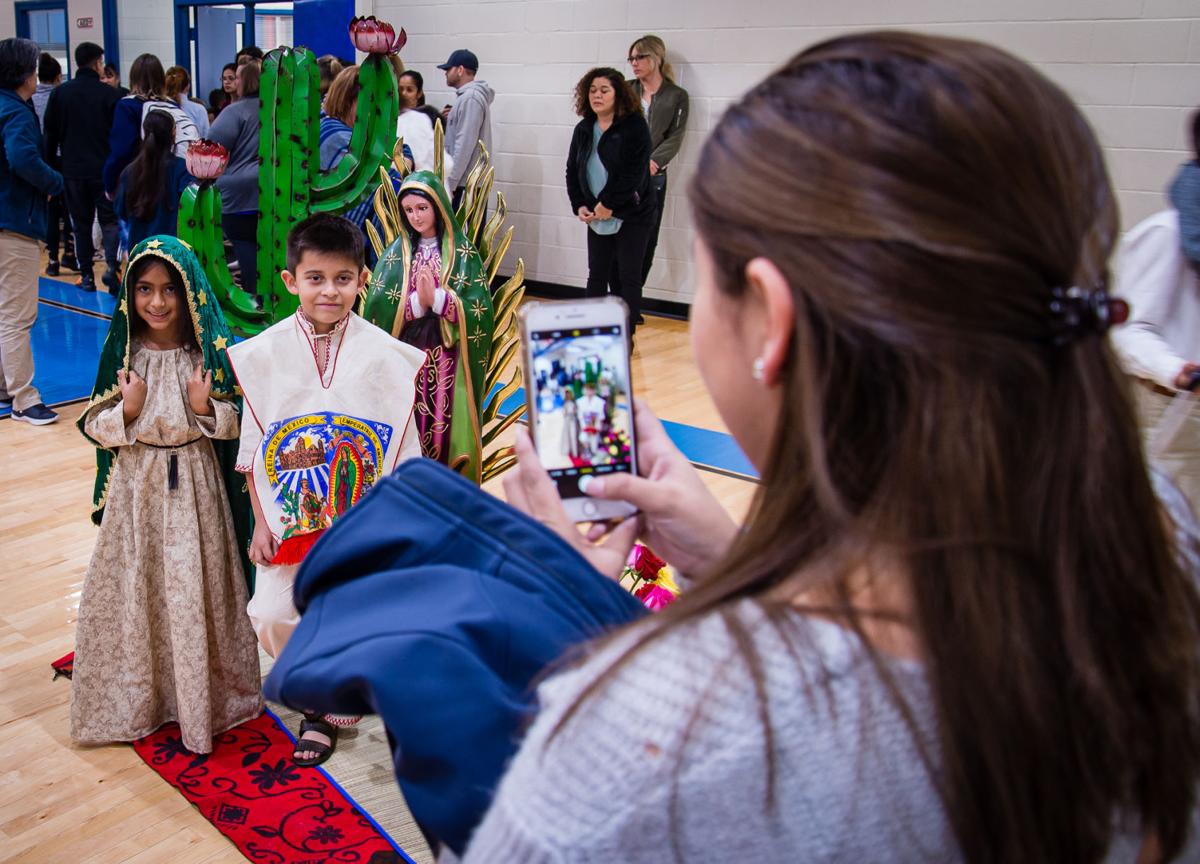 Nayeli Hernandez, right, takes a photo of her son Matthew, 8, with Ellyana Amaro, 8, after their performance during the Catholic feast day of Our Lady of Guadalupe on Thursday, December 12, 2019, at St. Mary’s Catholic School in Longview. (Les Hassell/News-Journal Photo) 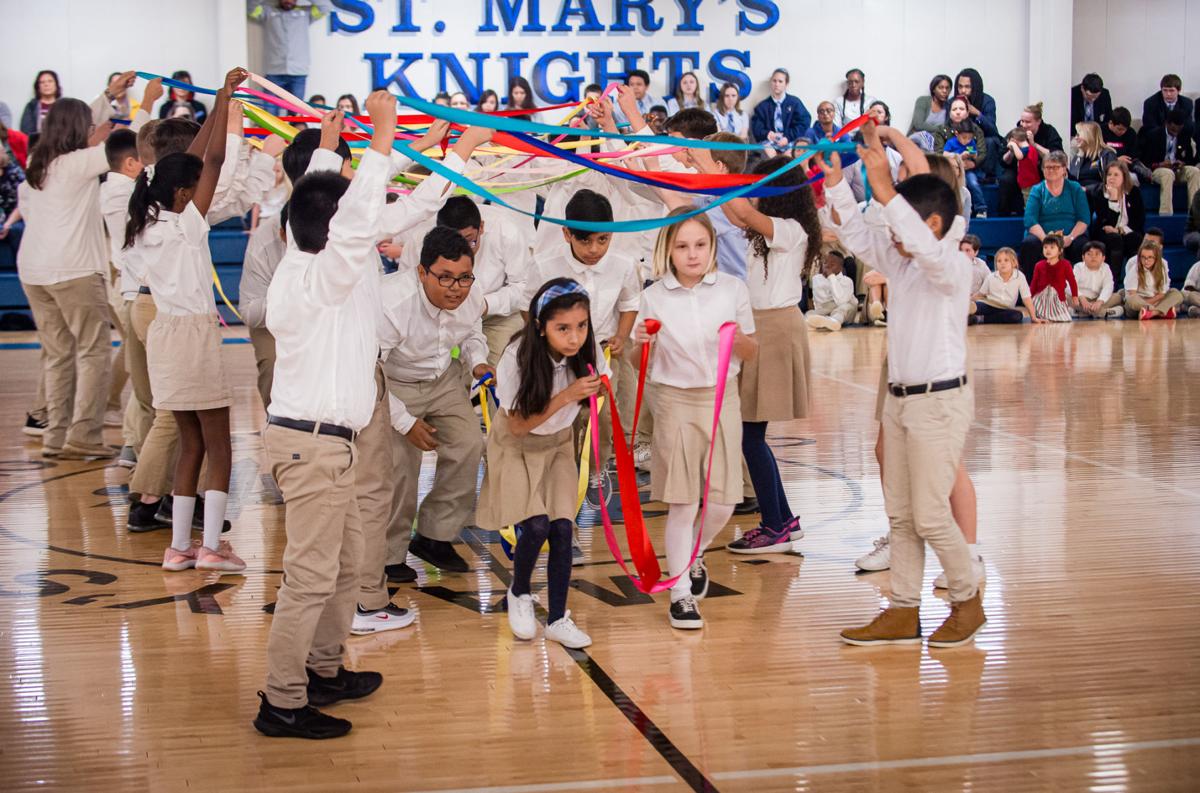 Nayeli Hernandez, right, takes a photo of her son Matthew, 8, with Ellyana Amaro, 8, after their performance during the Catholic feast day of Our Lady of Guadalupe on Thursday, December 12, 2019, at St. Mary’s Catholic School in Longview. (Les Hassell/News-Journal Photo)

Spanish teacher Dulce Trujillo has worked at St. Mary’s Catholic School in Longview for about five years, she said. On Thursday, she got to share “a piece” of herself with the school community.

Students in first through sixth grades performed traditional Mexican dances for the feast day of the Lady of Guadalupe, or la Virgen de Guadalupe.

According to a written statement from the school, Catholics believe that on the morning of Dec. 9, 1531, Mary, mother of Jesus, appeared to Juan Diego in Mexico. She asked him to go to the local bishop and give him a message to build a temple. When the bishop did not believe Diego’s story, Mary asked Diego to take roses of all colors to the bishop.

After seeing the roses, the bishop believed Diego. His cloak had an image of Mary, Our Lady of Guadalupe. The image remains clear today and is displayed in a church in Mexico City.

“When Our Lady of Guadalupe, or blessed Mary, appeared to Juan Diego, most of their ways to thank God was through dances,” said Trujillo, who is from Cárdenas, San Luis Potosí, Mexico. “That’s why we have a lot of dances, a lot of traditional Mexican dances. It’s a way of saying, ‘Thank you,’ to God and to the blessed Mary for the blessing she brought.”

Trujillo said the school’s principal, Darbie Safford, approached her about planning a celebration for the Lady of Guadalupe, whom Catholics celebrate Dec. 12.

The morning started with a procession to the church for Mass with matachines dancers. Matachines are dancers who perform the traditional dances for the Lady of Guadalupe.

The students also carried roses into the church. Traditional drums and music also were used.

Sixth-grader Daisy Rodriguez said she had never been part of a celebration like Thursday’s before. She and her classmates learned about the Mexican traditions in class.

The eight-grade students also presented a skit in Mass about the story of Juan Diego. In the afternoon, the students performed three dances.

Trujillo’s son, Valentin, 9, is no stranger to the dances. He has participated in celebrations at St. Anthony’s Catholic Church in Longview.

Despite his experience, the fourth-grader said he still learned valuable lessons dancing with his classmates.

“I learned that I have to stay focused, and no goofing around,” he said. “If not, it won’t turn out as good as what they did.”

Trujillo said the experience was an emotional one for her.

“(Mary’s) known as being the Queen of the Americas, that includes Canada all the way down Argentina,” she said. “So, being born in the country where she was seen, it’s very touching. I think the more we grow in faith, the more you are in love.”

Trujillo said she is thankful the school has a principal who wanted the students to learn about and participate in the celebration.

“We need to learn more about Mary, that’s who we represent; we are St. Mary’s,” she said. “What she represents is unity, love, joy, bringing the light of the world. We have a big, big responsibility with our students and all the community.”