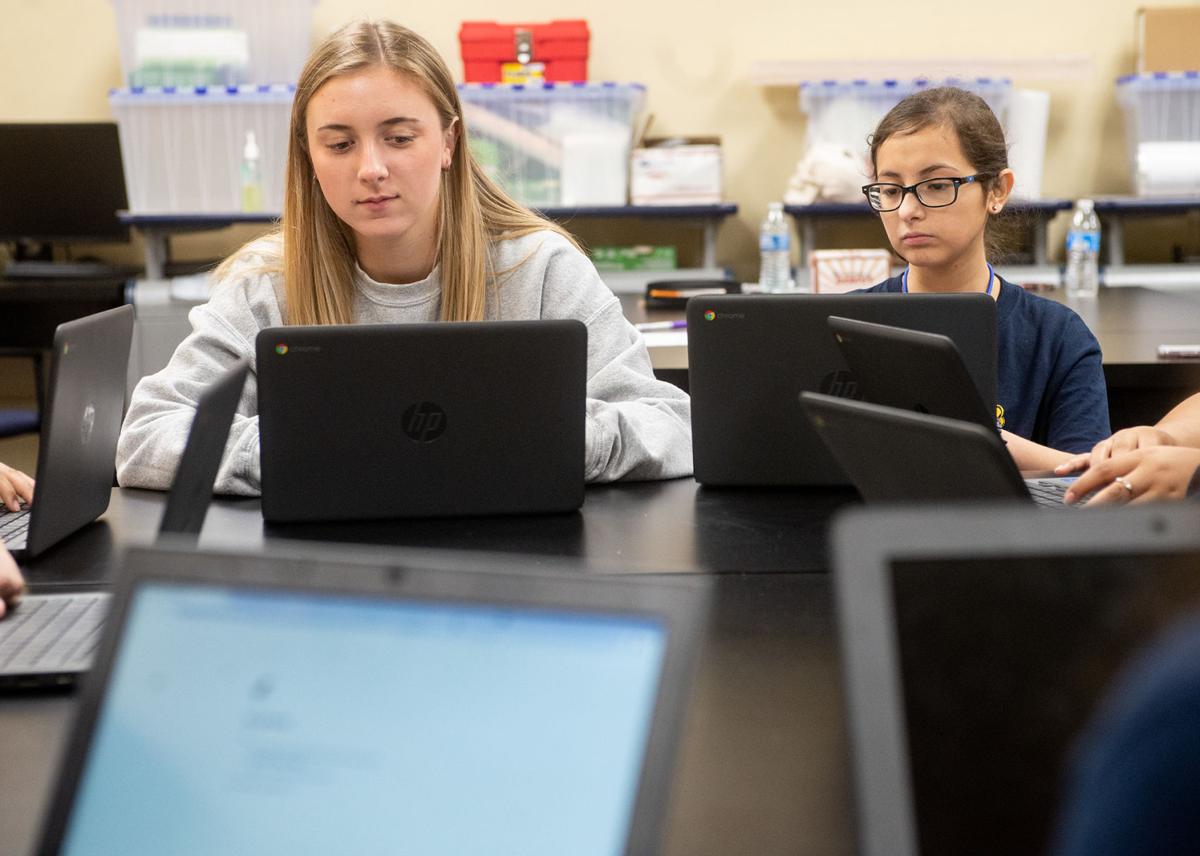 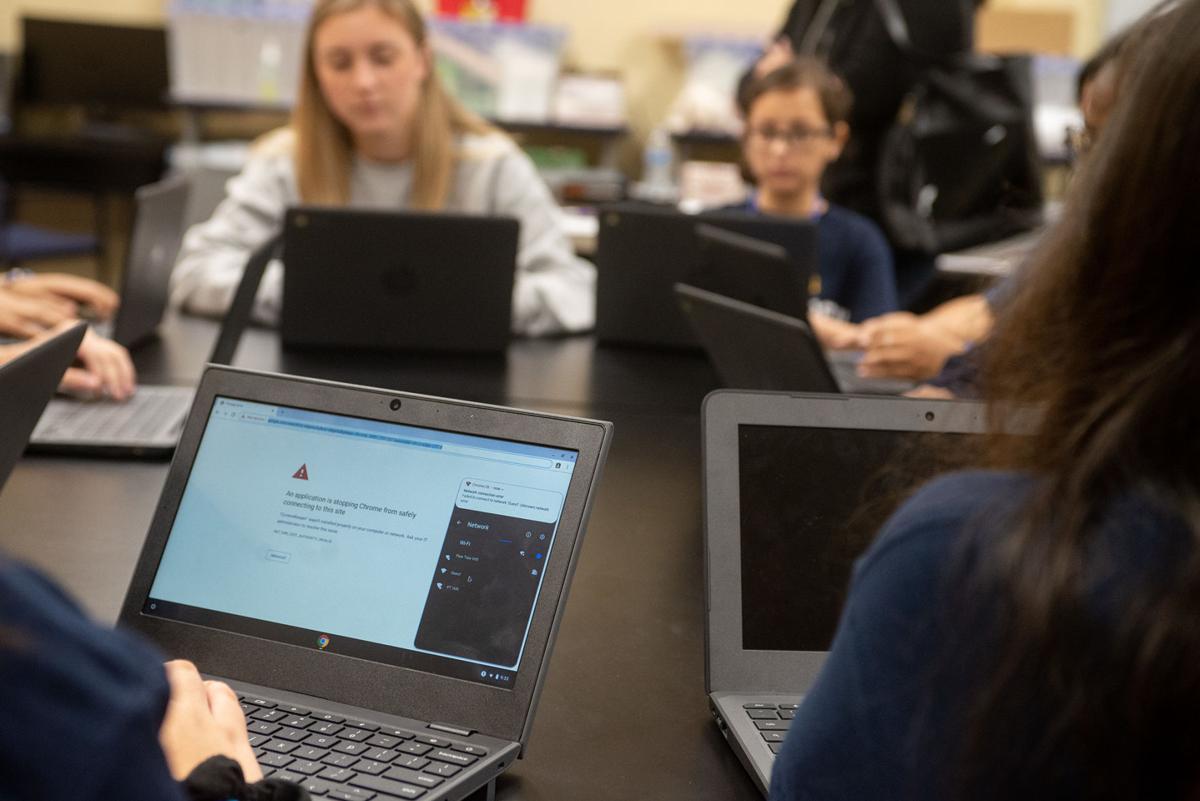 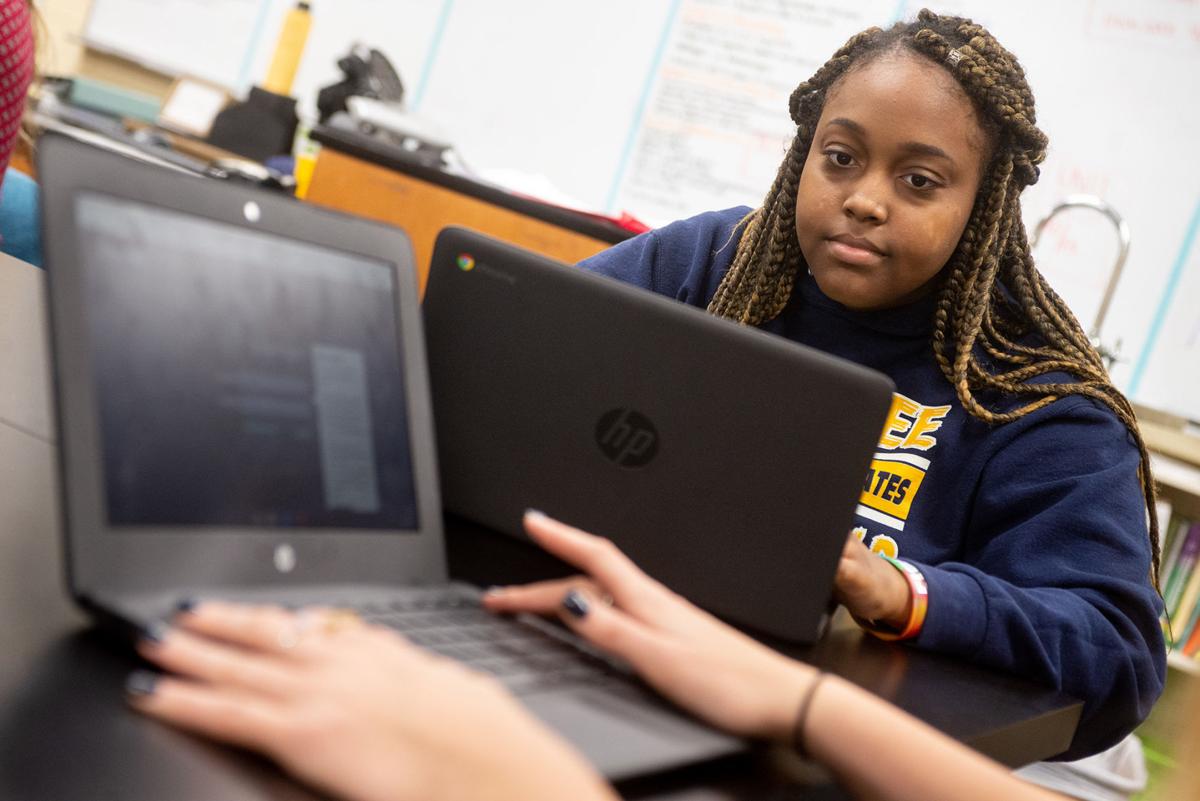 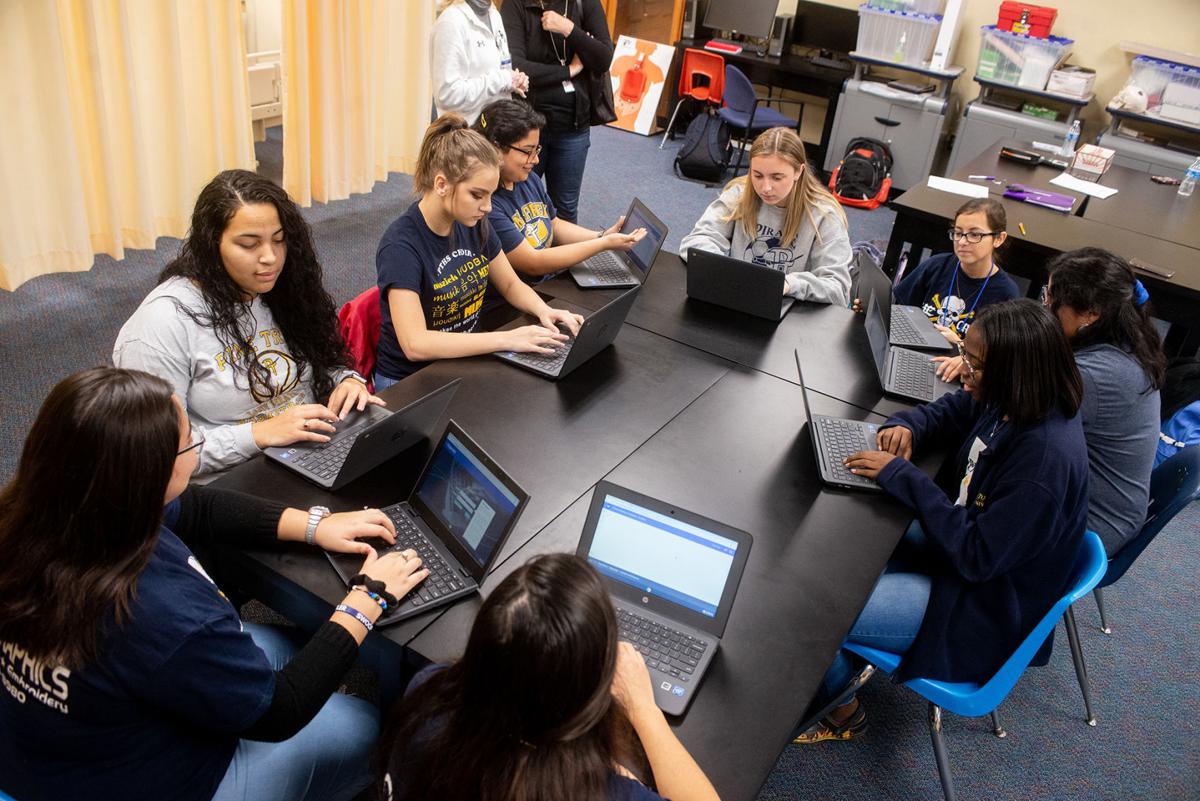 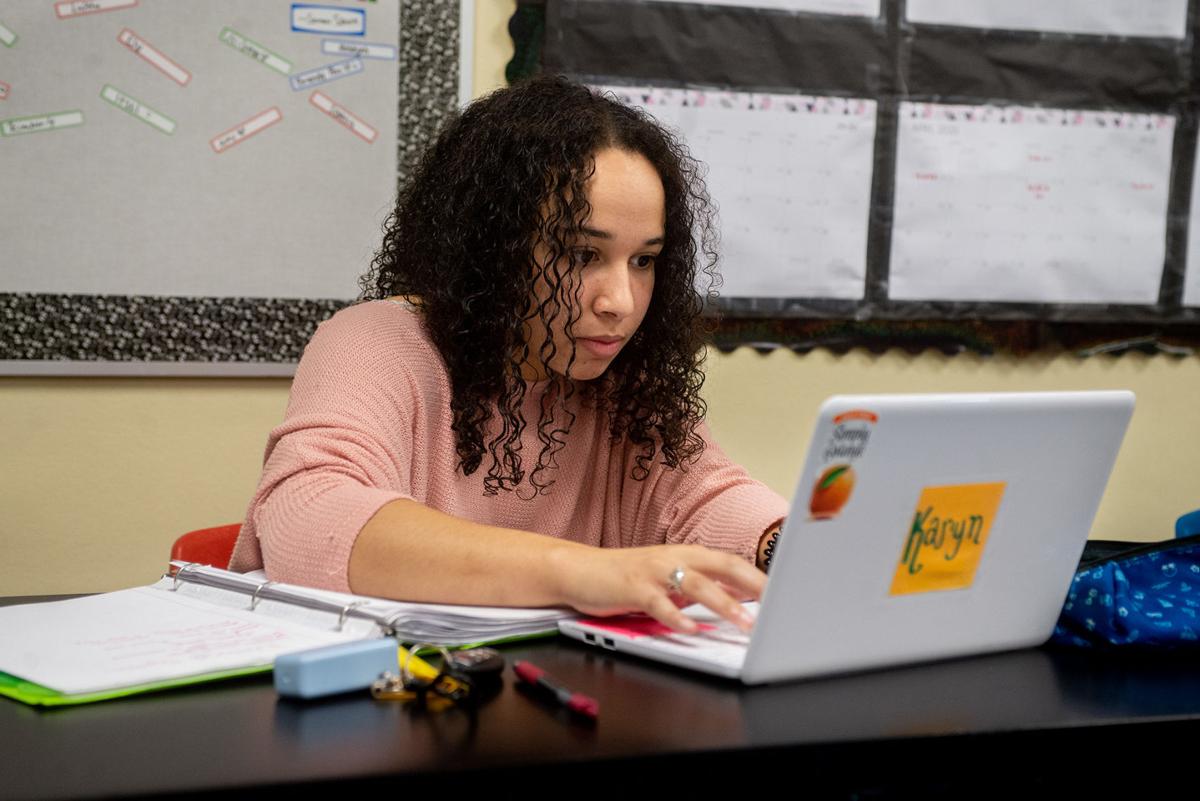 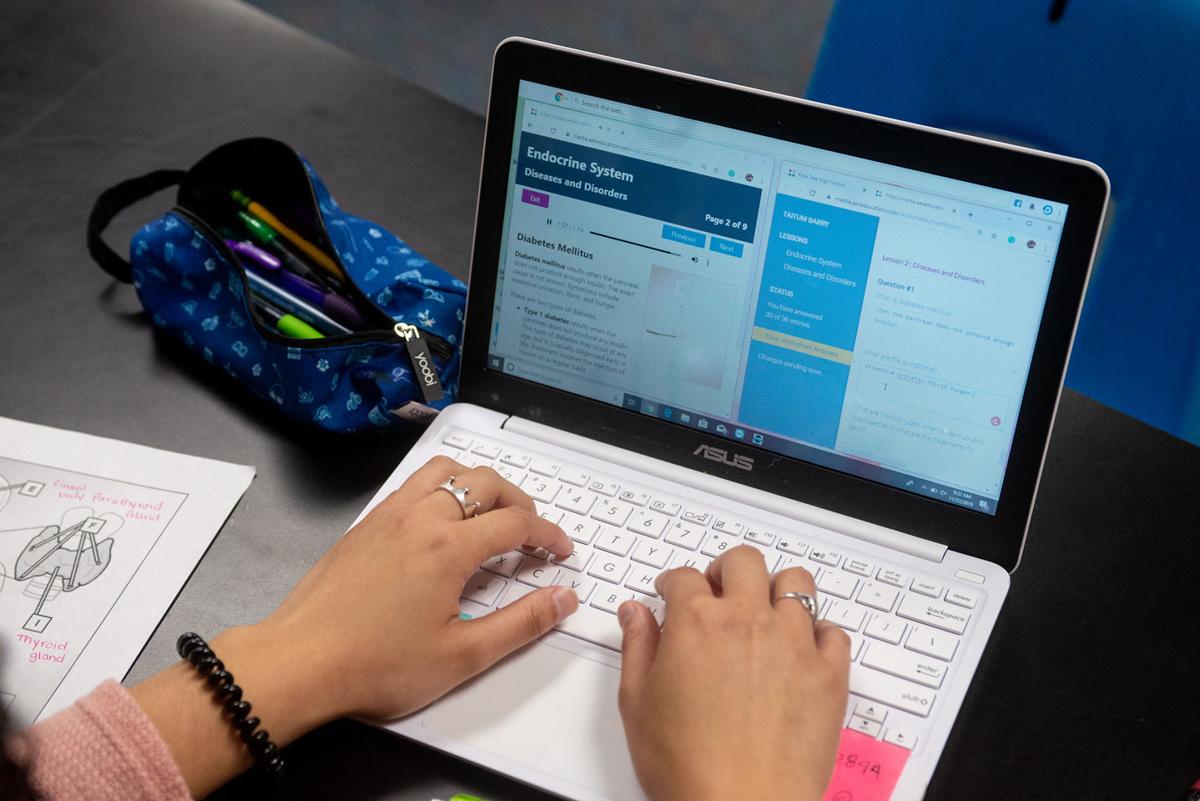 As technology evolves, it continues to shape the way students are taught — and options in the classroom are expanding.

At Longview ISD, every classroom has a presentation cart with a projector and computer, said Jennifer Smith, supervisor of instructional technology for the district.

Each classroom also has either a projector or a SMART board, which is an interactive white board, she said. There also are older desktop computers, but they are being phased out for Chromebook laptops.

The middle school campuses have three desktop computer labs and one “special use” lab that she said are used for keyboarding or coding. Forest Park Magnet School has SMART boards instead of projectors in most rooms.

Longview High School has three labs and desktop computers in classrooms, Large Smith said. The district has about 4,500 Chromebooks.

“As far as how the campus technology is funded, the bulk of the desktops in classrooms and campus labs were bought using bond funds when the campuses were built some 10-plus years ago,” she said. “(Longview High School Career Technology Education) labs are federally-funded and much newer.”

In 2015, Ware started using campus and district funds to provide each student with a Chromebook. Other campuses have used state grants for technology.

Superintendent Steve Clugston said the district tries to make significant purchases over time instead of making a large purchase every four years or so.

“That may not be everybody one-to-one, because not everybody in every class is going to need that one-to-one, so you try to put them where they’re going to be utilized,” he said. “We’re really going towards the Chromebook. It will do just about everything we want it to.”

Clugston said keeping Chromebooks in carts in classrooms means they can get charged and students won’t forget or lose them. The primary school uses iPads.

Todd Yohn, director of technology at Pine Tree, said when it comes to the ration of devices to students, the district is about three-quarters covered.

“We’re not quite one-to-one, mainly because that’s not our plan for them at the lower grade levels,” he said. “Some of those devices are being replaced this year, especially the older iPads. The vision would be at the higher levels for there to be a cart available for every classroom. I think that we’ll cover that gap next year.”

Yohn said he believes there is a need for technology in the district, which is why more is being purchased.

“I think a lot of teachers are more interested in the Chromebooks than they are the iPads,” he said. “But for the most part, when they work together and kind of work around schedules, I think that everybody has what they need available to them.”

By the end of the school year, Pine Tree classrooms will have about 40 interactive displays, Yohn said.

Spring Hill ISD Director of Technology Steve Hardy said the percentage of students to Chromebooks across the district is more than 50%, and the student-to-desktops ratio is about 11%.

Hardy said as online testing of students increases, he knows the district will need more computers.

Since Spring Hill is a smaller district, fewer computers have to be purchased for students to hit a one-to-one ratio, Hardy said. But fewer students means less funding.

“I’ve been at another district that was really small, and we did go one-to-one because of the numbers,” he said. “But, even at that point, you still have the scale of budgets. We may be smaller and it would be less expensive, (but) we just don’t have the same money. So it all kind of works out to be about the same. Yes, it would be less money, but we have less money.”

Equipment in the district is getting old, Hardy said, and he would like to keep computers on a four-year cycle.

Many districts prefer to use Chromebooks because of their affordability and because they are easy to manage, Hardy said. They can be set so students cannot exit a screen with a test on it, and they have access to Google Classroom.

Google Classroom is an online tool where teachers can add students to a class and post assignments, homework, documents and other updates.

White Oak ISD Superintendent Mike Gilbert previously said that grades six through 12 have a one-to-one student to Chromebook ratio. The lower grades have devices they use, as well.

Hallsville ISD’s technology director, Mark Page, said the district has about 1,200 student-use desktop computers in 50 labs across the district.

There also are 354 student-use desktops in select classrooms, he said.

“While we do not currently have a one-to-one initiative, we do have devices in classroom sets, including 1,321 Chromebooks in grades three through 12 and 787 iPads in grades (pre-K through second),” Page said. “Our approximate device-to-student ratio is just under 1:2 ... We are actively assessing the financial and long-term support options for a one-to-one launch in the near future.”