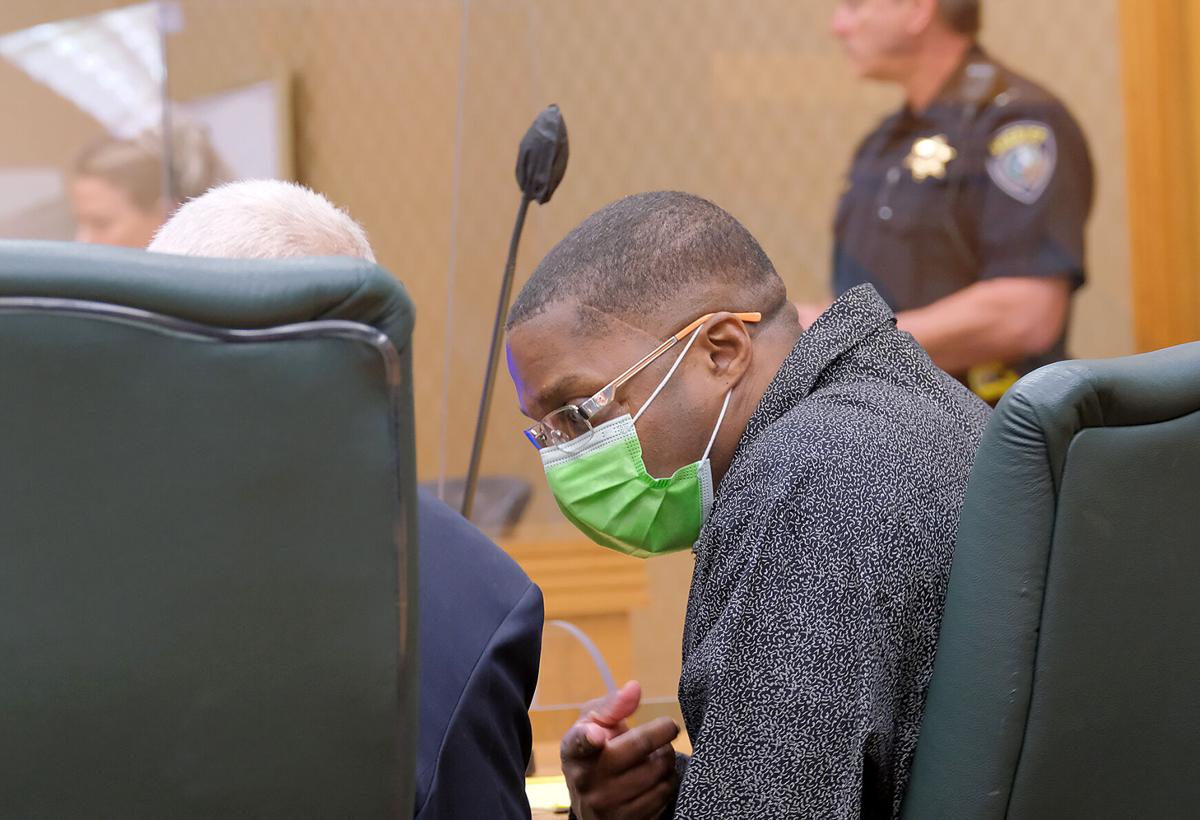 Kenneth Earl Thomas Jr. talks with his attorney Tuesday during his murder trial in the 2019 shooting death of Kimberly Wallace. 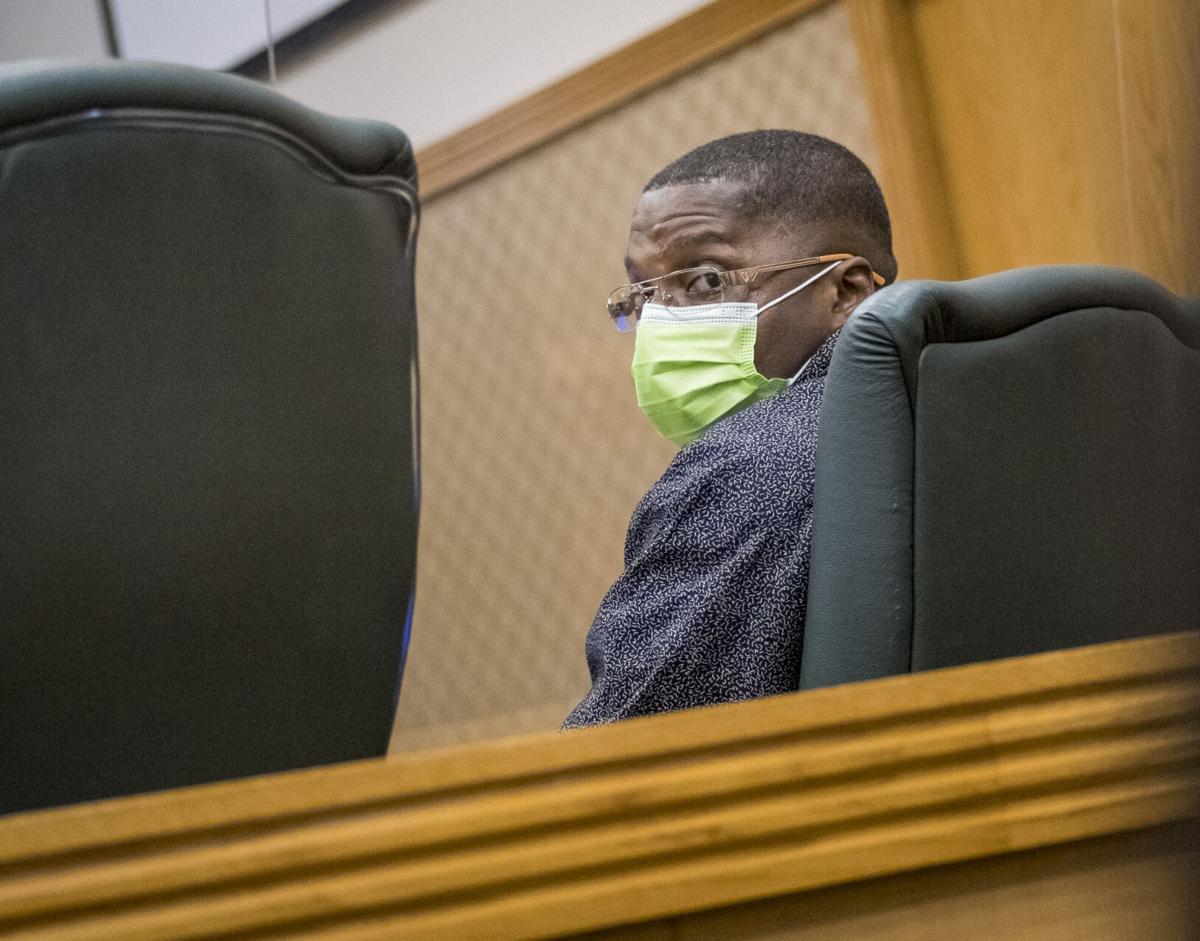 Kenneth Earl Thomas Jr. sits in his seat during his trial for the 2019 murder of Kimberly Wallace on Tuesday in the 124th District Court at the Gregg County Courthouse. 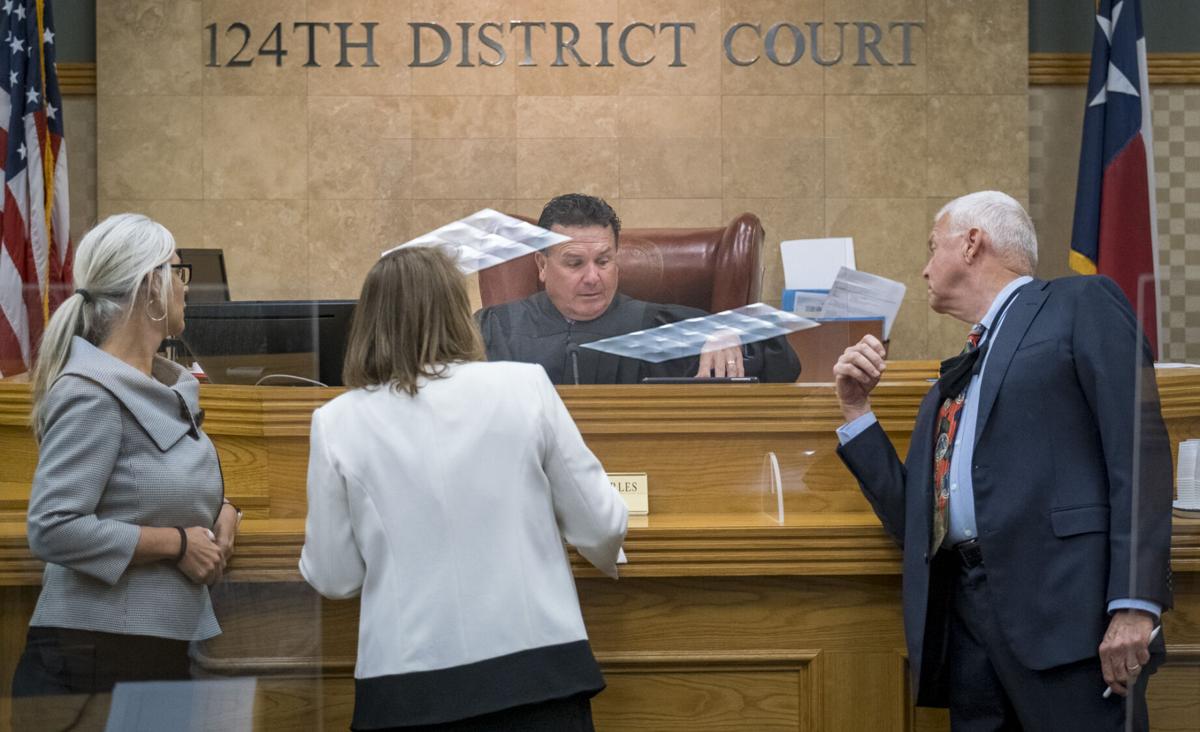 Judge Alfonso Charles talks to the defense and prosecution during the trial of Kenneth Earl Thomas Jr. for the 2019 murder of Kimberly Wallace on Tuesday in the 124th District Court at the Gregg County Courthouse. 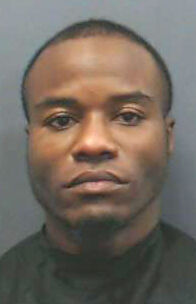 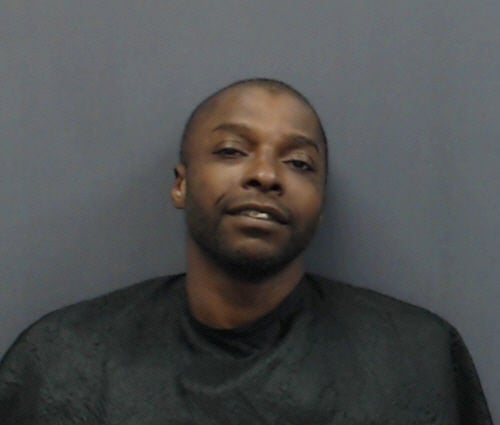 Kenneth Earl Thomas Jr. talks with his attorney Tuesday during his murder trial in the 2019 shooting death of Kimberly Wallace.

Kenneth Earl Thomas Jr. sits in his seat during his trial for the 2019 murder of Kimberly Wallace on Tuesday in the 124th District Court at the Gregg County Courthouse.

Judge Alfonso Charles talks to the defense and prosecution during the trial of Kenneth Earl Thomas Jr. for the 2019 murder of Kimberly Wallace on Tuesday in the 124th District Court at the Gregg County Courthouse.

A Longview woman was helping a friend jump-start his vehicle outside of her home when she was shot and killed in 2019, according to Tuesday testimony in a Gregg County murder trial.

Kenneth Earl Thomas Jr., 43, is accused in the death of Kimberly Wallace, a Longview mother of three. The jury was selected Monday and the trial began Tuesday morning with opening arguments and witness testimony.

“What I can say about this is this is, basically, a tragic murder of Kimberly Wallace at the hands of this defendant, Kenneth Thomas,” Gregg County Assistant District Attorney Tanya Reed said in her opening statement. Reed said Thomas goes by the street name “The Chosen One,” shortened to “Cho” or “Cho Cho.”

According to police, Wallace was shot and killed in the early morning hours of July 28, 2019, outside a home in the 1200 block of Temple Street. Patrick Nigel Williams, 34,  was with Wallace when she was shot. Williams said he met her on Facebook and had known Wallace for about a month before the incident.

“I had texted her,” he said, at about 1:30 or 2 a.m. saying that he wanted to see her. When he arrived at her home, she said it was too late for him to come in, he testified.

“I sat outside on my phone and I smoked (marijuana),” he said. Williams said he told her he was going to smoke outside of her house and then he would leave.

At about 2:15 a.m., Williams said he tried to leave but his car would not start.

“The starter was going out at the time ... I had jumper cables,” Williams said. Wallace came down to help him jump-start his car, pulled her vehicle out of the driveway to face his and opened the hood. Williams said her hood did not have a light so he went to get his phone for the flashlight to see where to attach the jumper cables.

When he heard the gunshots, he initially thought it was a blown gasket and he ducked down. He saw a person “fast walking away.”

“I said, ‘hey, where are you going?’ I thought it was her,” Williams said. Then he said he saw her lying on the ground.

“I was thinking who’d she have a problem with,” Williams said. He knocked on the door to the house and saw her three children hurrying to the door.

“I told them someone just shot their momma,” he said, telling them to call 911.

Longview Police officer David Cheatham, who has since retired, testified that he responded to a call for an “assault in progress” after 6 a.m. on July 26, 2019 near Little Caesars Pizza off of High Street. The call came two days before Wallace was killed. In the parking lot, Wallace flashed her lights at him and spoke with Cheatham.

Cheatham said she was upset, crying, her hair was in disarray, there were scratch marks on her face and “swelling from what I believe to be a slap.”

The 911 call from the day of Wallace was shot was played for the jury. Wallace’s eldest daughter made the call after Williams came into the house. The child is difficult to understand at times on the call, crying and confused, Nevill noted.

“I don’t know, I think something’s wrong with my mom,” the child said.

“What do you mean,” the dispatcher said. “Do you need police or an ambulance?”

The girl begins to cry and tries to explain what Williams told her.

EMS was initially sent to the scene and called for police assistance when Wallace’s body was found in the street, according to testimony.

When police arrived, they removed the three children and Williams from the home and cleared the house.

Body cam footage for the first responding officer was played in court. The children's cries could be heard and the general hustle to protect the scene. Wallace’s body was briefly visible between the two cars.

Wallace was shot in the head, and six casings were found at the scene, according to testimony.

Police obtained a murder arrest warrant for Thomas that afternoon when officers found him in Broughton Park, located in the 1200 block of El Paso Street.

When police confronted Thomas, he began shooting at the four officers, and they returned fire, according to a police statement. Thomas was wounded twice and was then taken to a local hospital, where he was treated for non-life threatening injuries and released back into police custody. No officers were injured.

A Longview man suspected in a weekend homicide was shot by police Sunday evening.

A jury on Thursday found a Longview man guilty of murder in the fatal 2019 shooting of a woman with whom he has a child.

'We got justice for Kim': Longview man sentenced to life in prison for killing a woman in 2019

A Longview man was sentenced to life in prison Friday afternoon for killing the mother of his child in 2019.