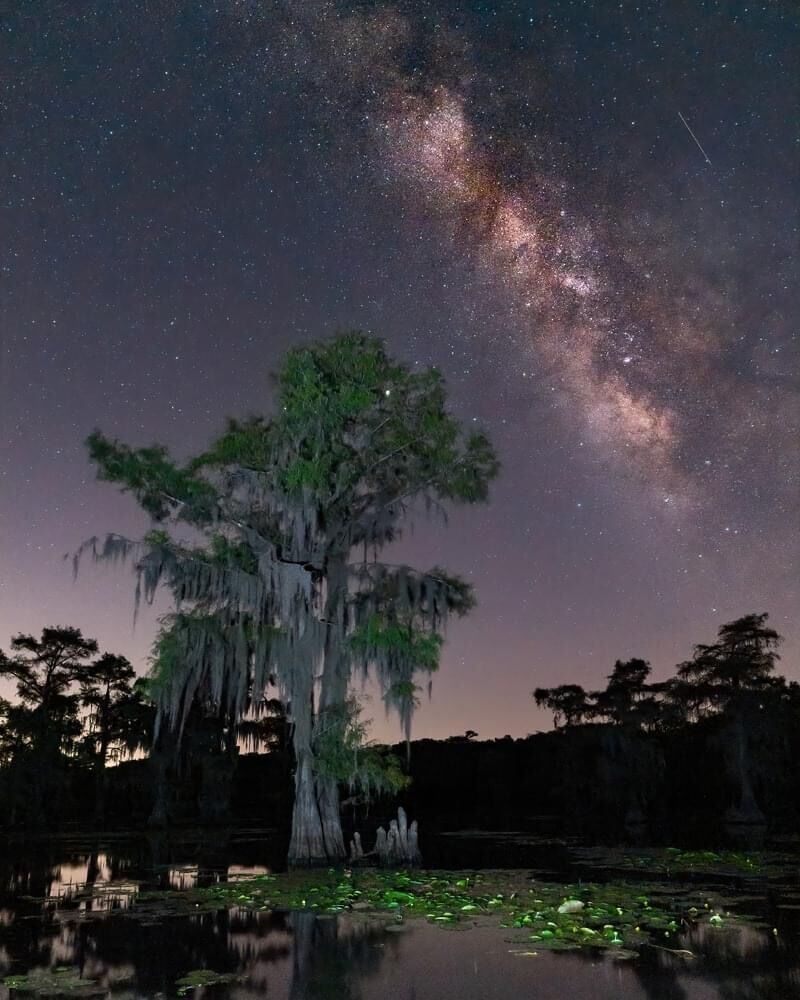 John Martell, a Rockport photographer, has snapped what is reported as the first photograph of the Milky Way above Caddo Lake. The photo has gone viral on social media. 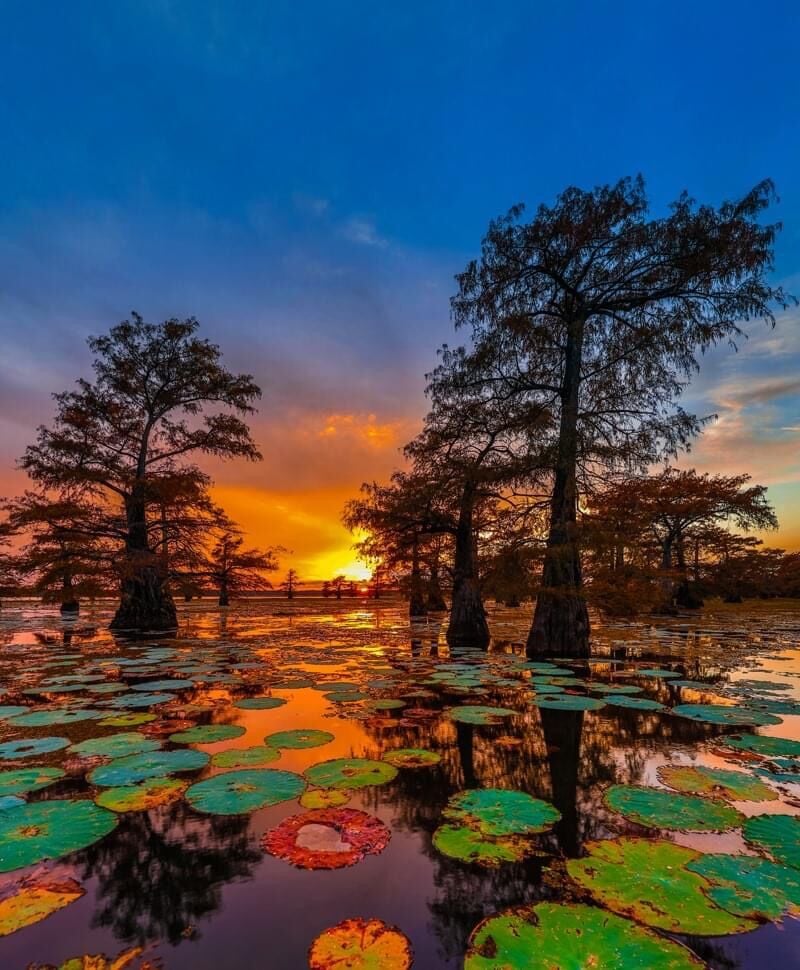 John Martell, a Rockport photographer captured a rainbow of colors in the clouds above Caddo Lake on a recent trip. 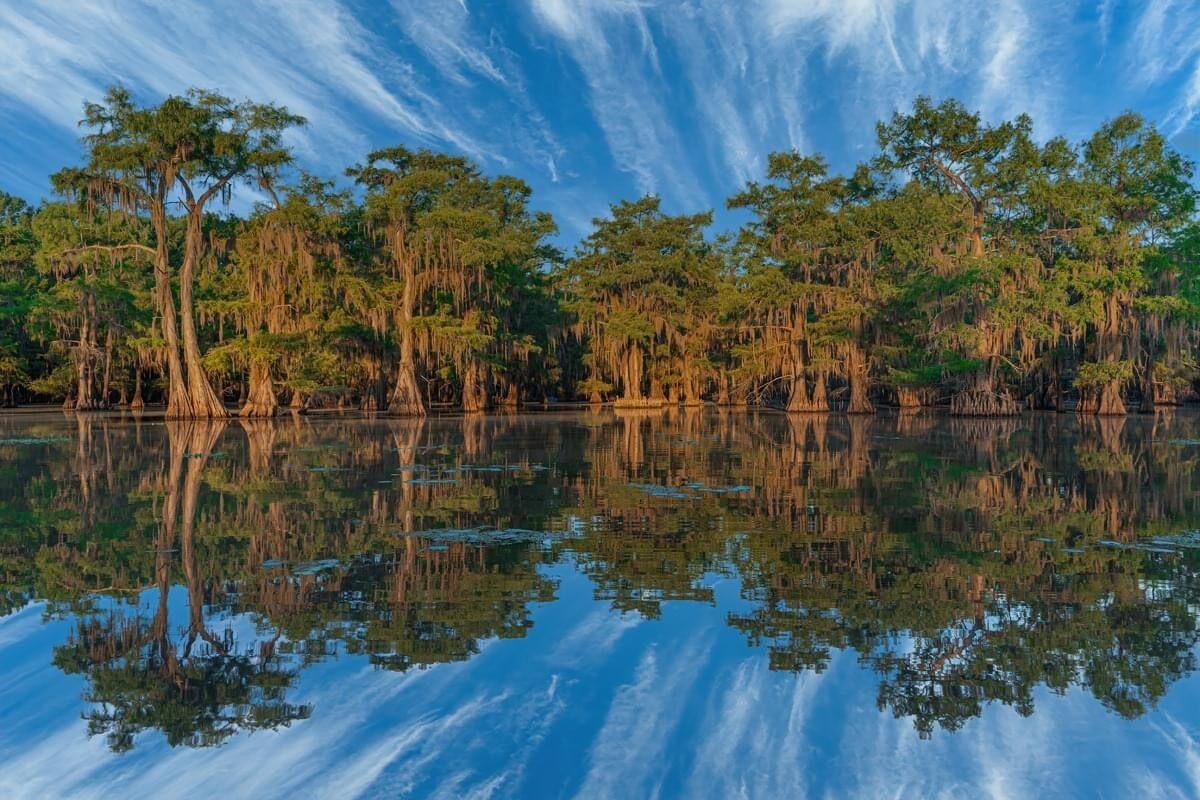 A Caddo Lake sunrise and blue sky is seen. 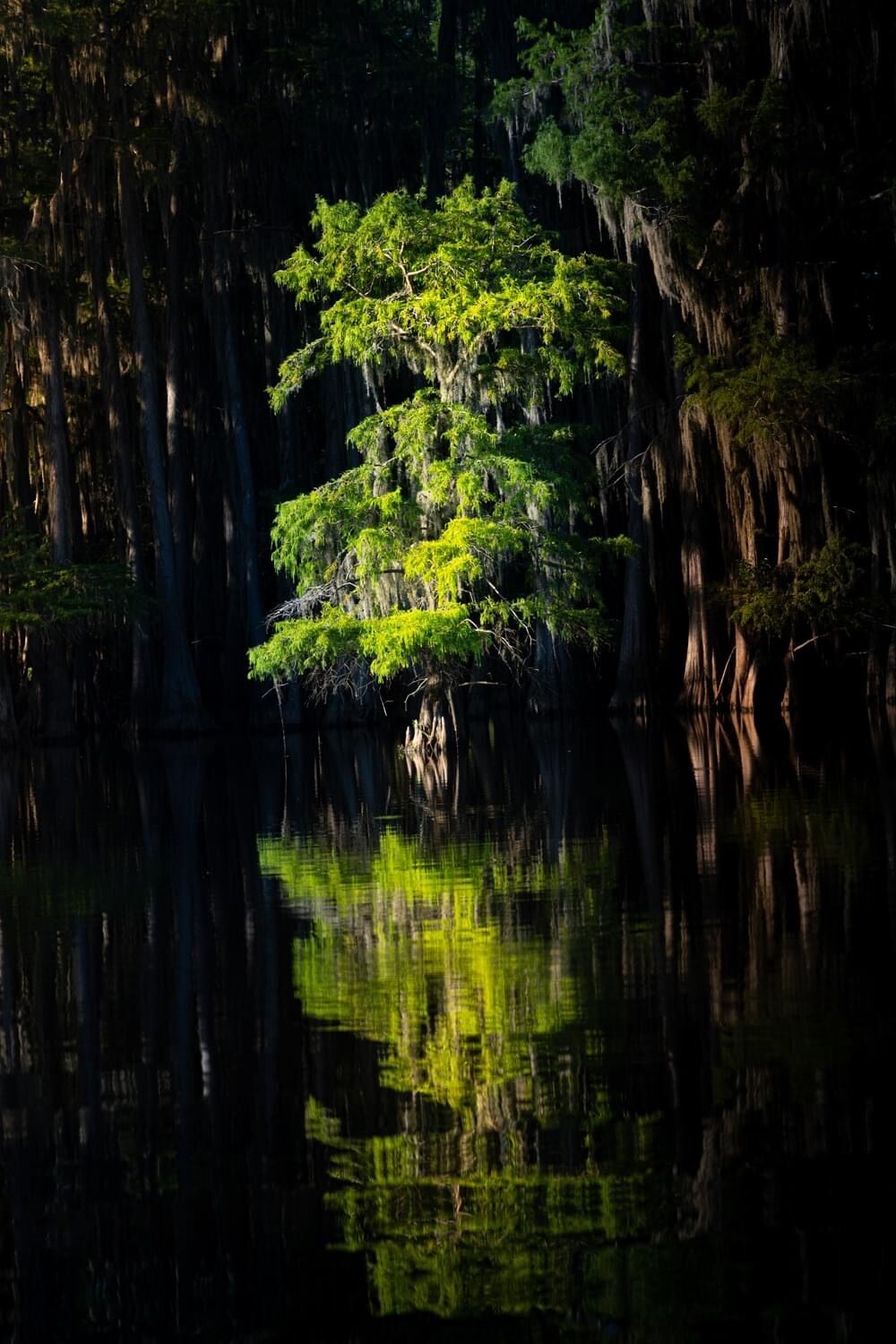 Part of a Cypress is painted in light. 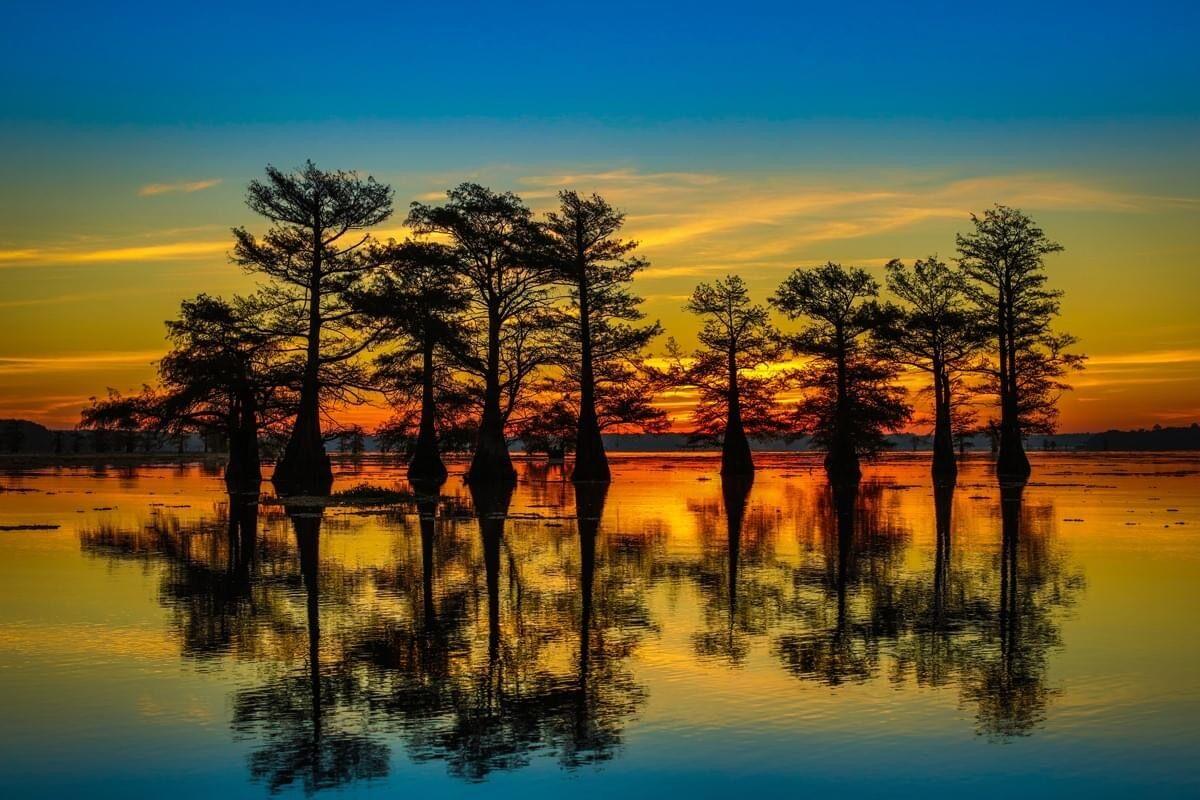 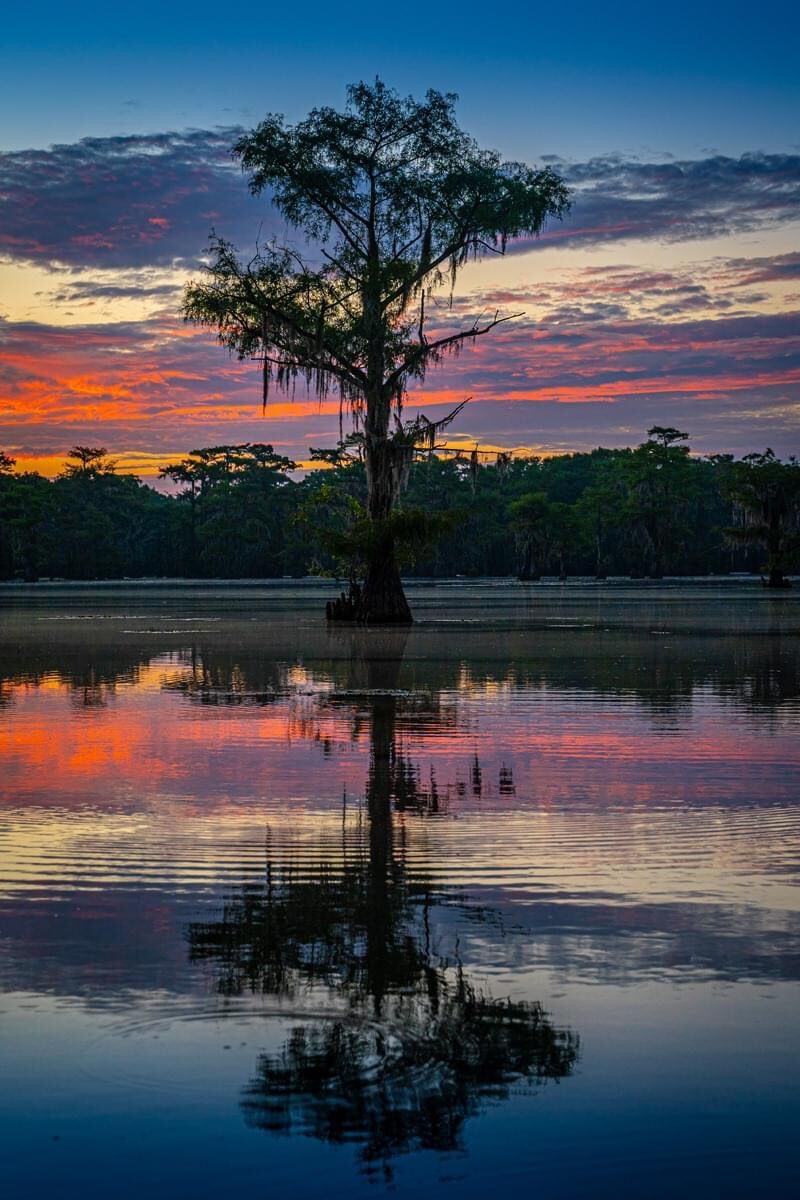 A Cypress tree is reflected in the waters of Caddo Lake as a rainbow sky lights up the background of Rockport photographer John Martell’s image. 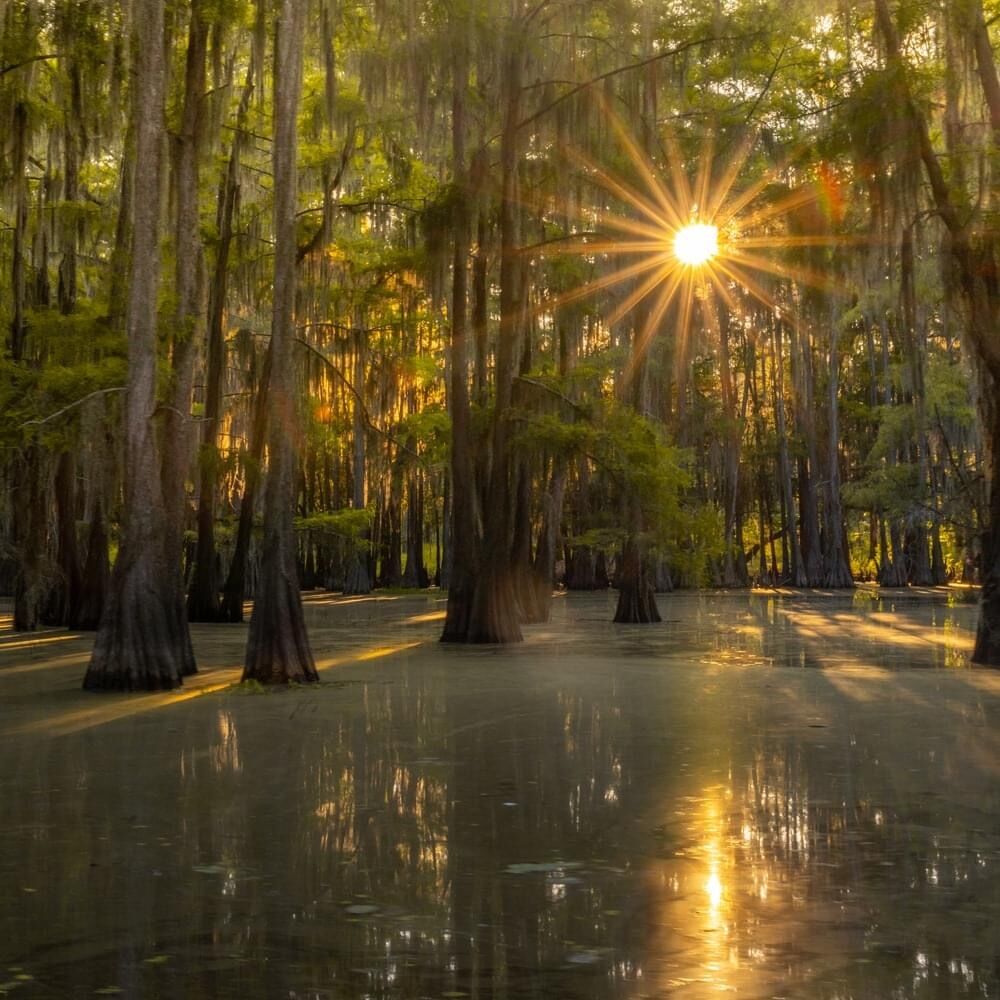 The beauty of a Caddo Lake sunrise is caught in a photograph by John Martell. 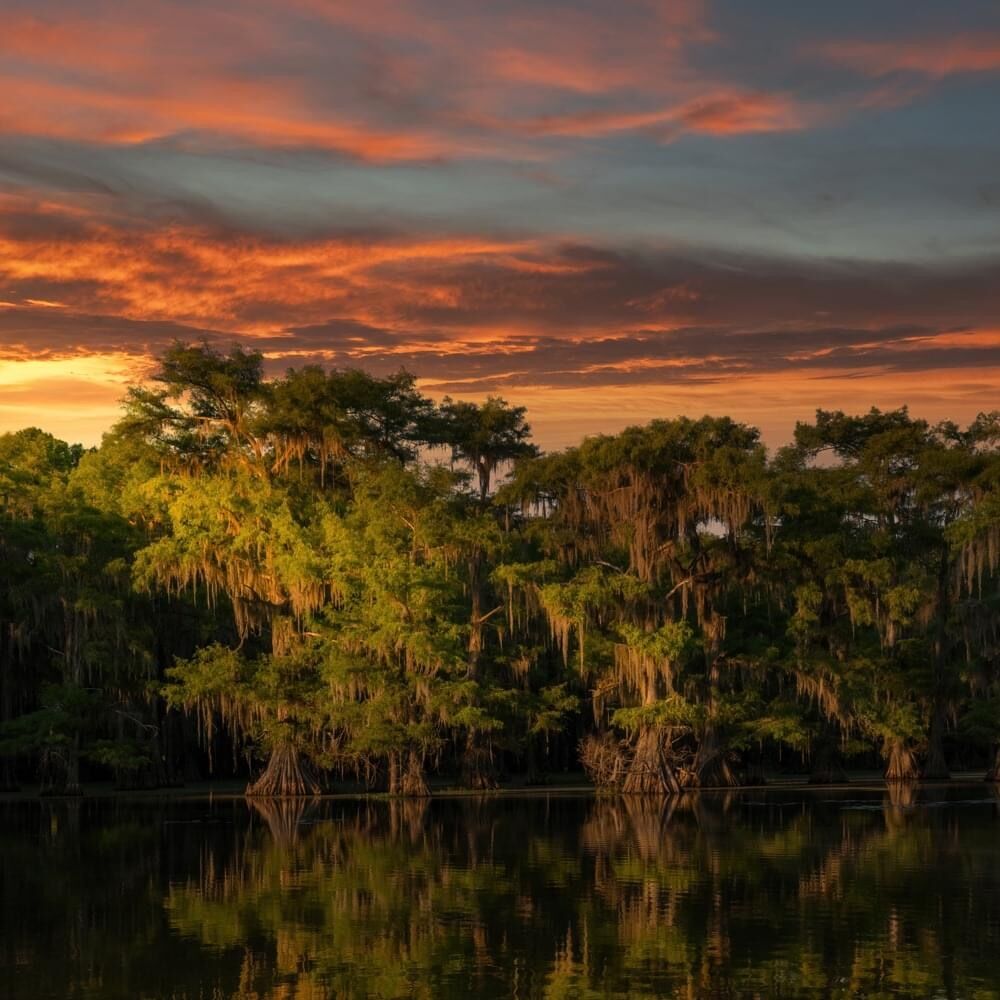 Light paints the underside of Cypress trees at Caddo Lake in a photograph by John Martell. 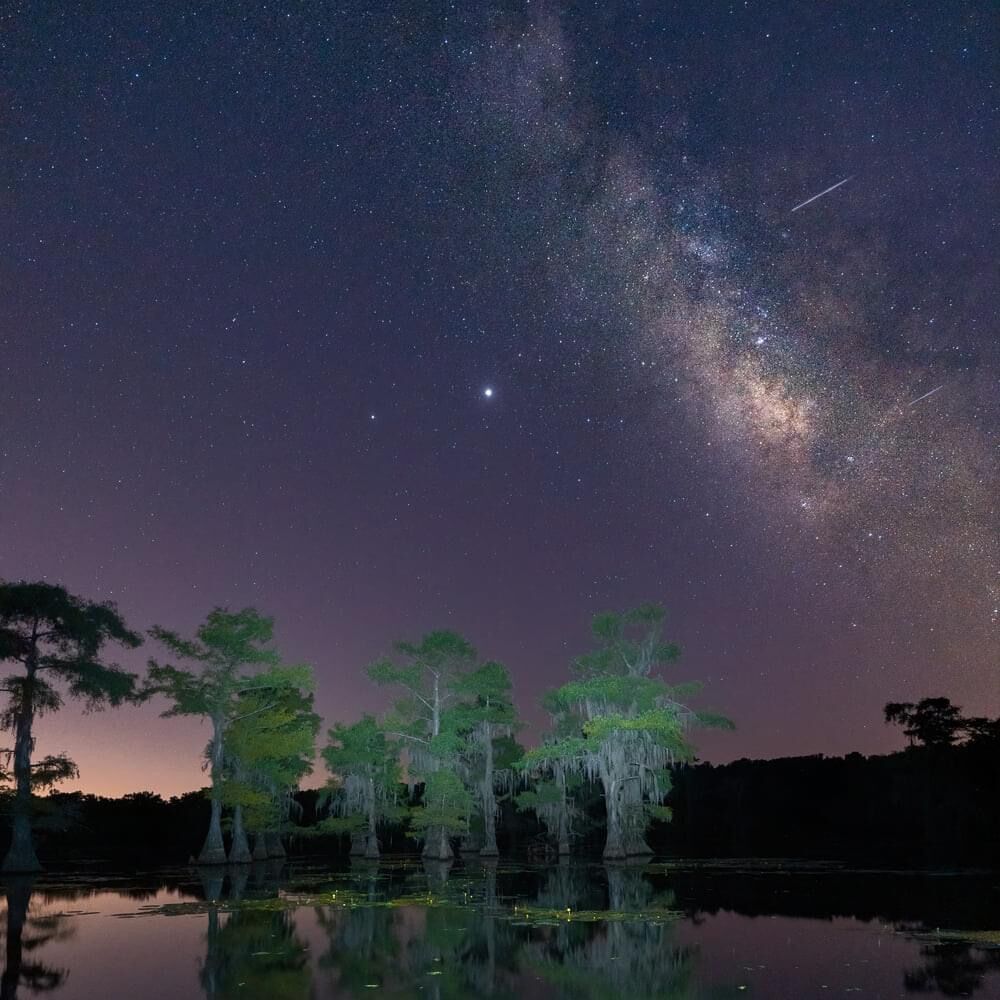 John Martell, owner of John Martell Photography, snapped what is reportedly the first photograph of the Milky Way perched in the night sky above the waters and Cypress trees of Caddo Lake. 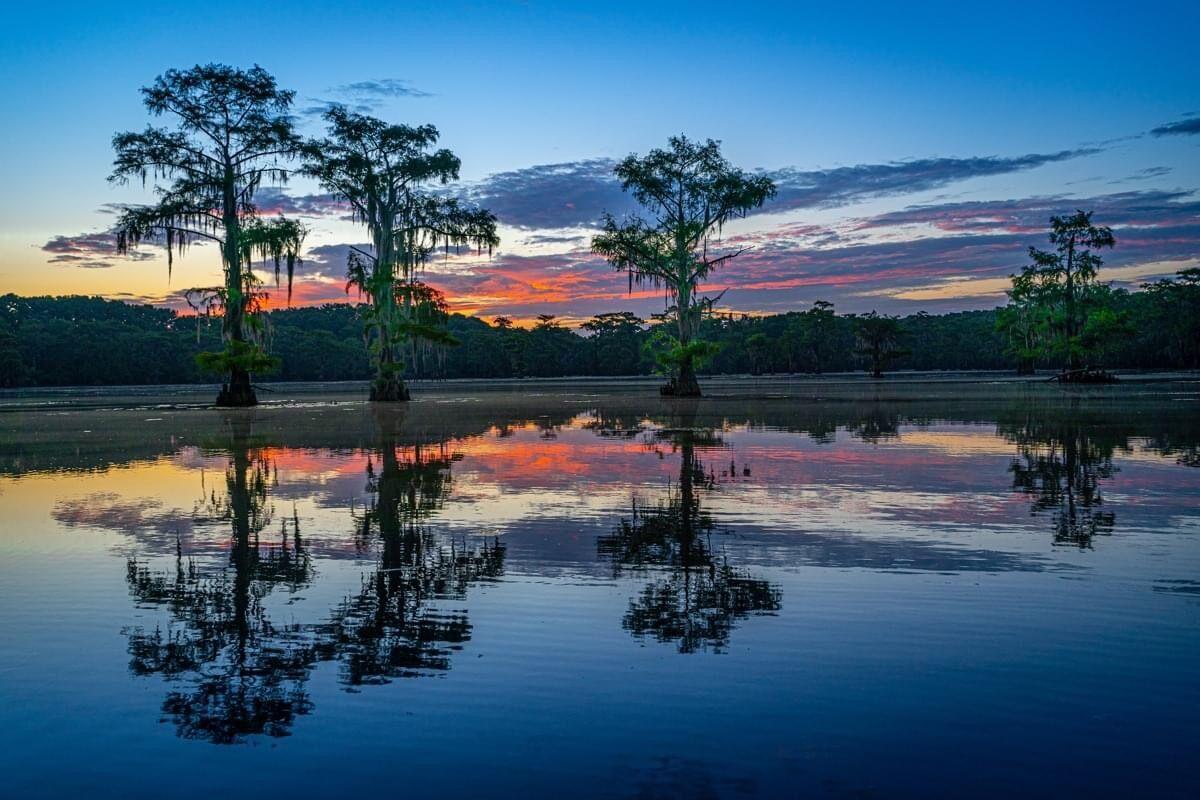 The rainbow skies and Cypress trees of Caddo Lake are seen in a sunset photograph by John Martell. 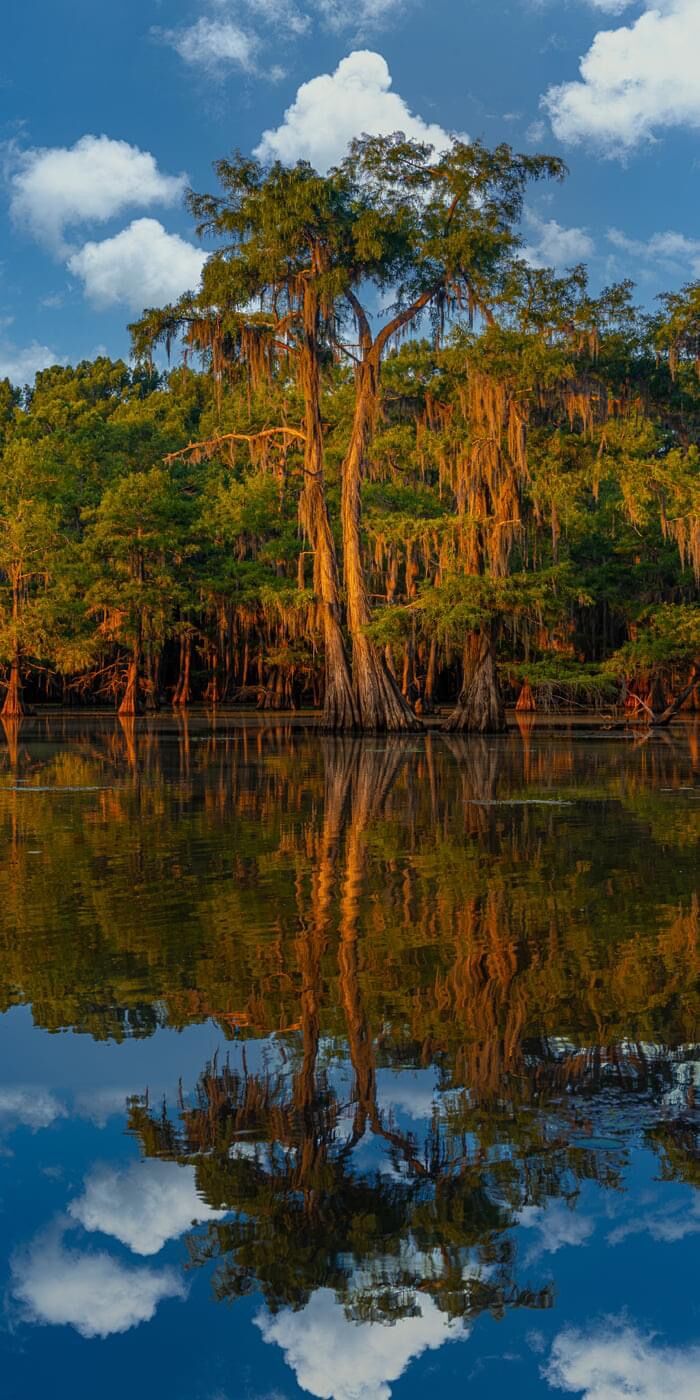 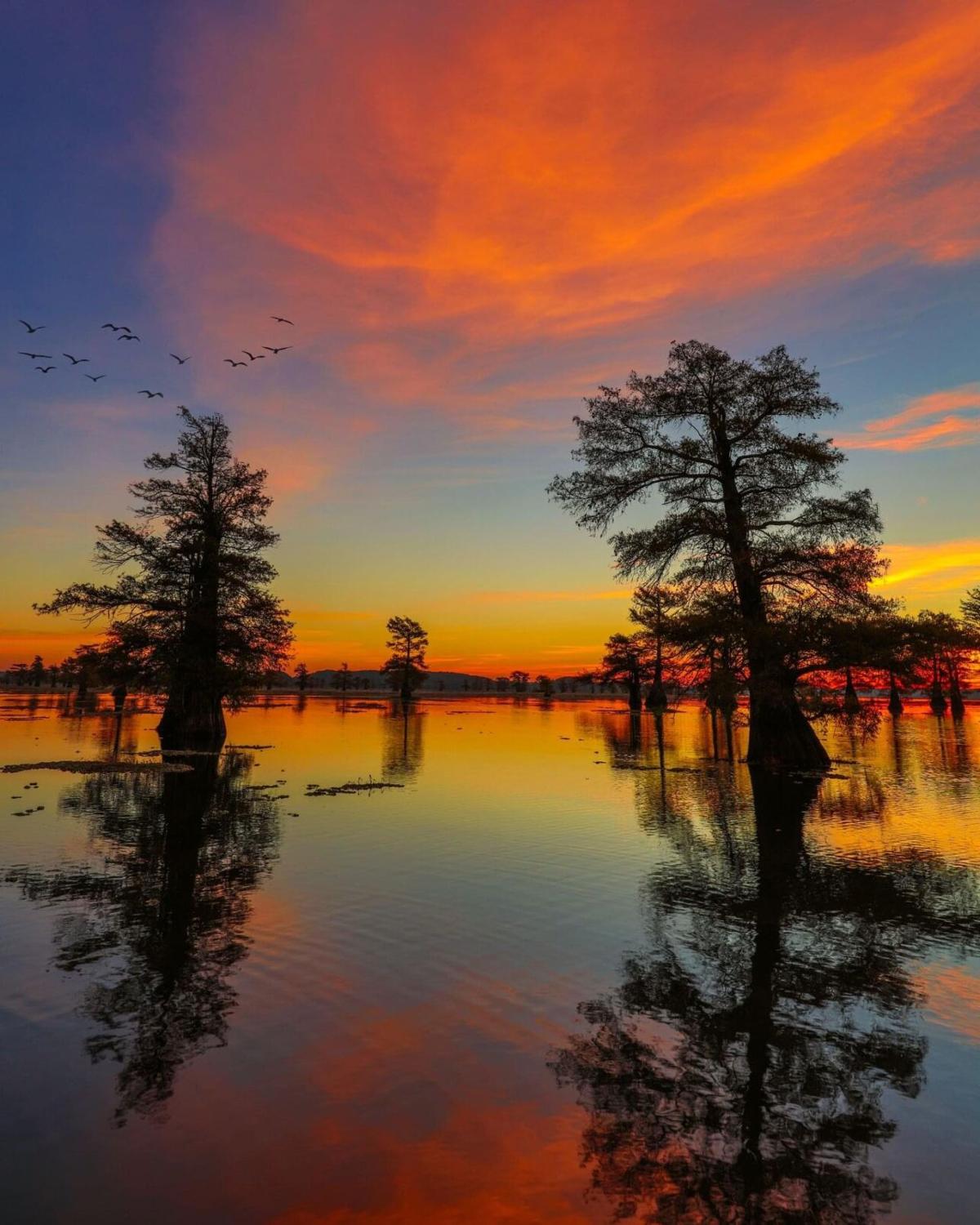 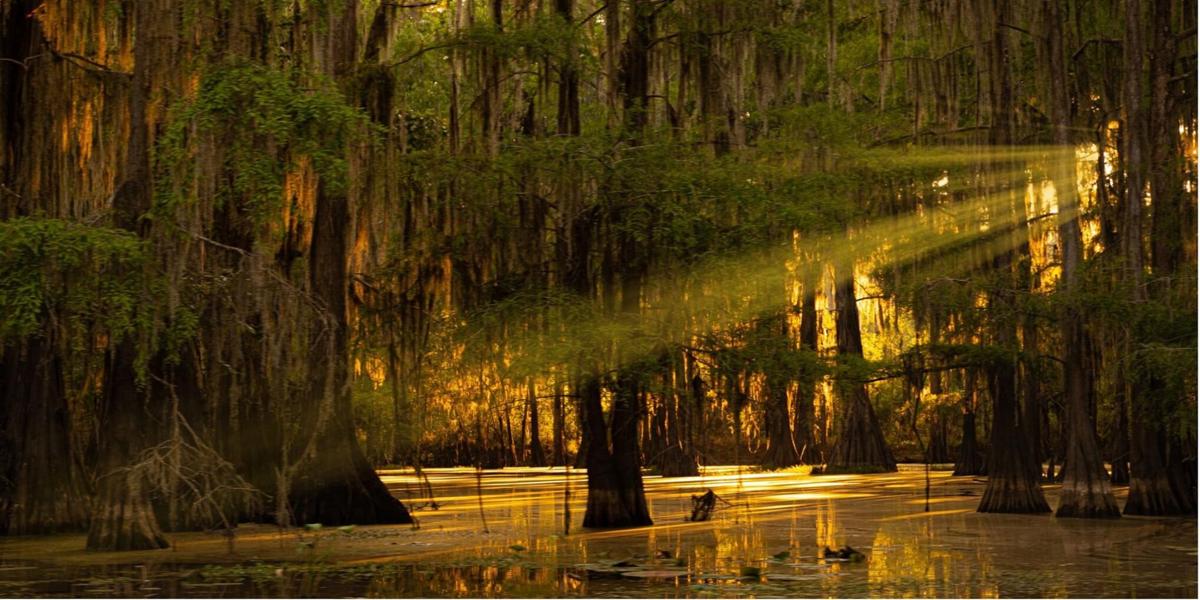 John Martell, a Rockport photographer, has snapped what is reported as the first photograph of the Milky Way above Caddo Lake. The photo has gone viral on social media.

A Texas photographer’s photo of the Milky Way above the Cypress trees and Spanish moss at Caddo Lake has garnered almost 200,000 views on social media.

“I try to never self guide when I travel for photography,” said photographer John Martell of Rockport. “Caddo Lake is a great example. If I set out in the dark, in the early morning or late evening to get a sunrise or sunset shot, it would be easy to waste time trying to find the best place to go for all the elements I’m looking for in my shot.”

So Martell, who has visited Caddo Lake a few times before his most recent visit earlier this month, reconnected with Caddo Outback Tours guide John Win.

“John has a good reputation among photographers, and he knows where to go for the best light at certain times, or whatever setting you’re looking for,” Martell said. “We really depend on these photography guides.”

Martell specializes in photos of the Milky Way galaxy, as well as sunrise or sunset photos, so he and Win mostly went out to shoot during the early morning hours, late evening or around midnight.

Martell was seeking to capture a photograph of the Milky Way above the haunting Spanish moss-covered Cypress trees of Caddo Lake. The only problem, Martell said, was being on a boat in the middle of a body of water didn’t provide the sturdiest base needed for the shot.

“To get a photo of the sky at night with the stars, you have to leave the shutter open longer, about 20 seconds, and allow for longer exposure, and you have to keep the camera rock steady,” Martell said. “Any movement during that longer exposure, you’d just see blurs instead of stars.”

Martell and Win came up with a solution. They grabbed a piece of galvanized pipe, stuck it down into the mud that sits at the bottom of the shallow areas of Caddo Lake, and put one leg of the camera’s tripod down inside the pipe, then attached the camera on top. Martell and Win named their invention the “pipe-pod.”

“We had a steady base now with the ‘pipe-pod’ and could allow for the longer exposure, and it worked,” Martell said.

The resulting photo is reported to be the first of the Milky Way above Caddo Lake.

“I searched on the internet to find a photo with that title and couldn’t find a single entry,” Martell said.

Some of Martell’s other photos at Caddo Lake show sunrises with the sun’s rays peeking through the Spanish moss of the Cypress trees, while others are sunset photos that show the the leaves of the trees lit up from below with shadows all around.

“We call that ‘light painting’ when we use lights to make the definition of trees and other objects stand out when taking night time photos, otherwise you would just see the trees in silhouette,” Martell said. “It’s amazing to think some of those Cypress trees have been there more than 3,000 years.”

Martell hadn’t planned the trip to Caddo Lake this summer, but much like the rest of the world in 2020, the ongoing COVID-19 pandemic affected his travel photography plans this year.

“A friend and I were supposed to take a trip to a volcano in Guatemala that you can safely view from a distance erupting every 45 minutes to an hour during this time of year, and I wanted to get some photos of the Milky Way above an erupting volcano,” Martell said. “Then we had planned to go to Glacier National Park, but due to COVID-19, and I’m 74 years old, I didn’t want to be on a plane, sitting close to people I don’t know, so I looked for places I could drive to by myself.”

Martell has more than 22,000 followers on his Facebook page at www.facebook.com/JohnMartellPhotography and has posted one photo a day, each day, for more than the past five years.

His Milky Way photo above Caddo Lake has been shared more than 1,600 times, has almost 5,000 reactions, more than 500 comments and has been viewed more than 177,000 times as of Wednesday.