When the Longview City Council meets today, it will consider whether to pass a resolution denouncing a potential white supremacy event that may be coming to the city in September.

Residents can offer their opinions by signing up to speak during the citizen comment" portion of today's 5:30 p.m. meeting at the Jo Ann Metcalf Municipal Building, 300 W. Cotton St.

“This is a non-verifiable event that has breathed life into something that may or may not be happening. It’s disappointing that we have jumped to this conclusion because our community has never waivered about how we feel about things,” Mayor Andy Mack said Monday. “We have been a strong community, and we continue to be a strong community. We would never let something like that come into our city that would endanger our community.”

According to Aryan Freedom Network, the event will feature “educational lectures, Aryan folk music and Racial Unity amongst different organizations and individuals from all across North America.” The website — which was designed to feature swastikas, Nazi propaganda, Confederate flags with skulls, pictures of Adolf Hitler and more — says the event is not open to the public but is a private event.

Those who wish to attend must belong to or have been vetted by "a White Racialist organization," according to Aryan Freedom Network.

While the city of Longview cannot inhibit the federally protected rights to freedom of speech and freedom to peacefully assemble, Mack said Monday that the proposed resolution is intended to show that hate groups are not welcome here.

A copy of the proposed resolution says the advertisement for the Longview event contains racially charged language, and “it appears that the group is a hate group and that the event is a white supremacist rally.” The proposed resolution states the city finds the use of Longview's name in connection with hate groups or events sponsored by such groups “offensive and detrimental to the city.”

The city does not condone hate groups and condemns the “white unity conference” reportedly planned Sept. 25 in or near Longview by the Aryan Freedom Network, according to the proposed resolution. The resolution also states the city disapproves of and condemns the use of its name in connection with events or materials associated with such groups.

According to the proposed resolution, the city demands that organizers of the event remove all references to the city of Longview from “any and all materials associated with said event and with said group.”

The event originally was scheduled in Paris, Texas, in October; however, after the City of Paris passed a similar resolution, the white supremacist organization began circulating new fliers with Longview listed as the location. Its events page on its website also reflects the conference is scheduled for Longview. When planned in Paris, the organization called itself "Church of the KKK."

District 2 Councilwoman Nona Snoddy said Saturday she would like to see Longview consider a similar resolution to the one passed in Paris. Some other council members, including District 4 Councilwoman Kristen Ishihara, also have spoken about their hope for Longview to show that hate groups are not welcome in the city.

"The city of Longview is not in any way interested in condoning or ignoring that type of behavior," Ishihara said Monday. "That event as well as the individuals who would attend that type of event are not welcome in our city. I hope they receive that message from the City Council as well as from our community." 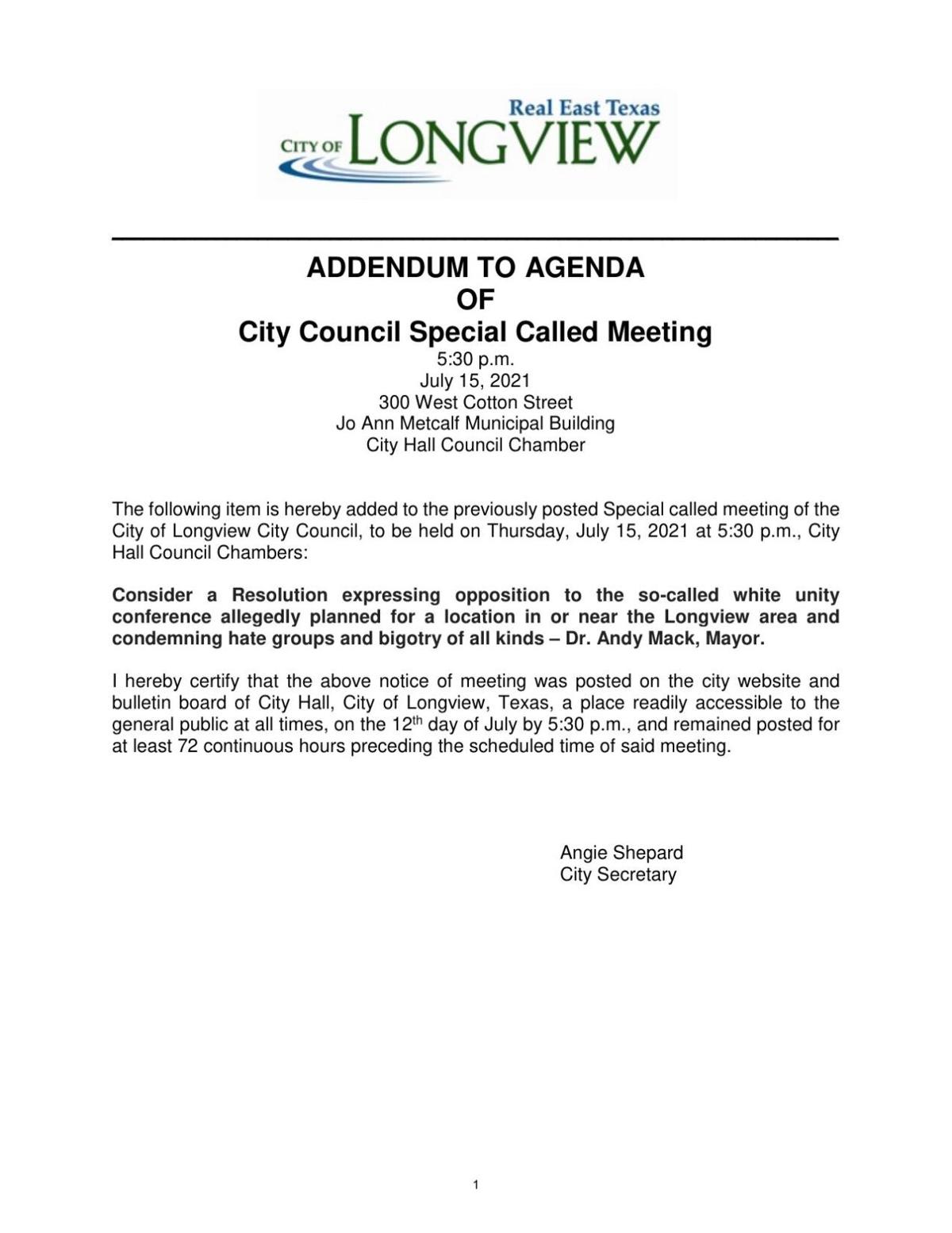