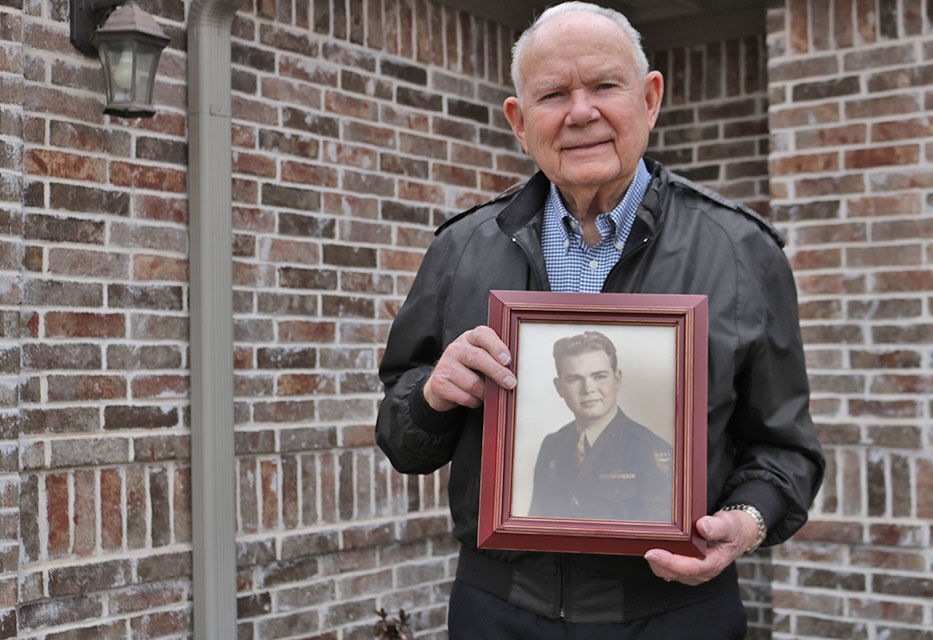 93-year-old Raymond Lewis holds a photograph from his time as a Marine. 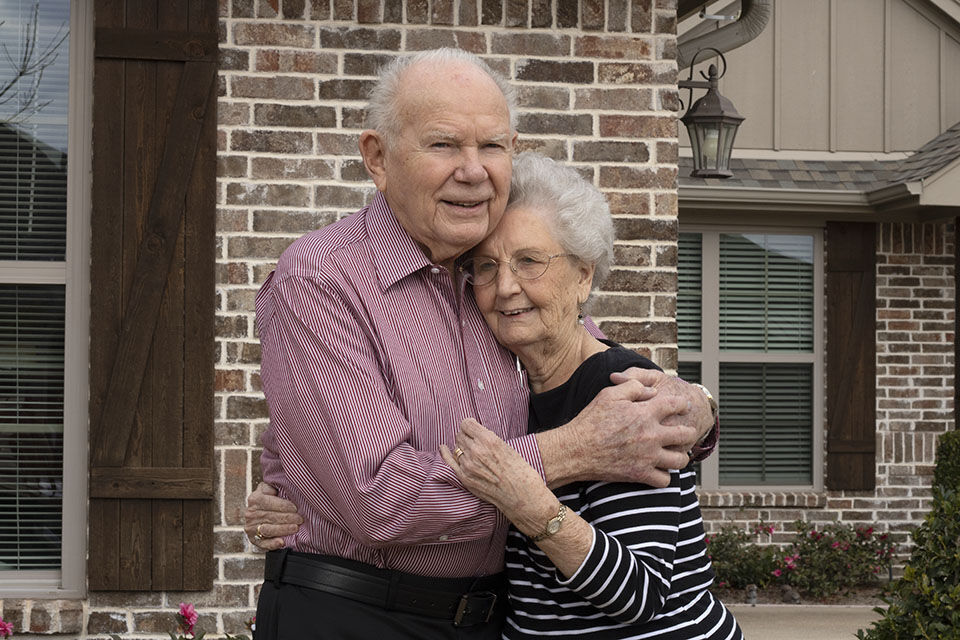 Lindale residents Raymond, 93, and Rita, 92, Lewis have been married for 75 years. 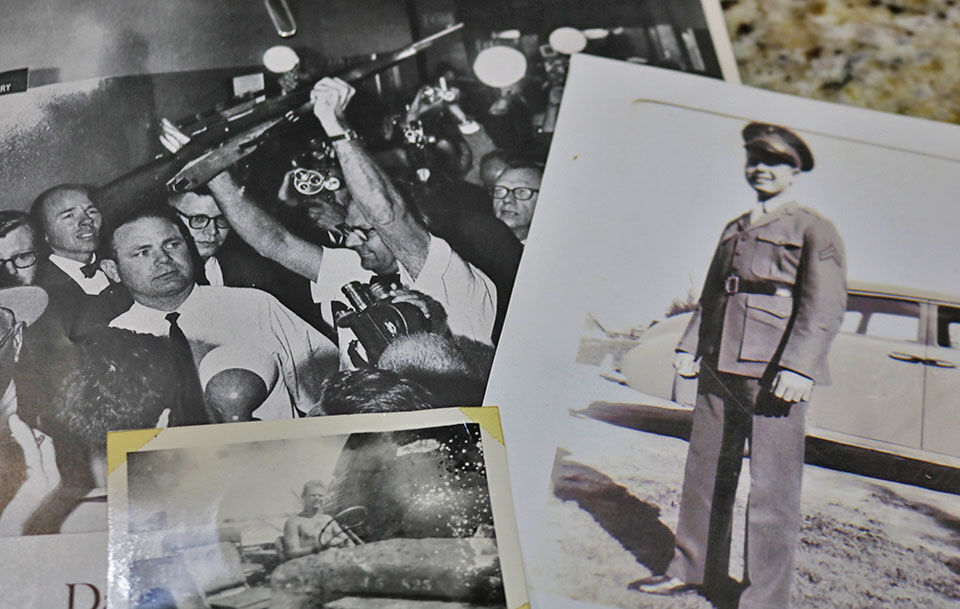 Raymond Lewis shares old pictures from when he was a Marine and when he served as a Dallas police officer. Lewis fingerprinted Lee Harvey Oswald after he was arrested in the death of President John F. Kennedy in November 1963. 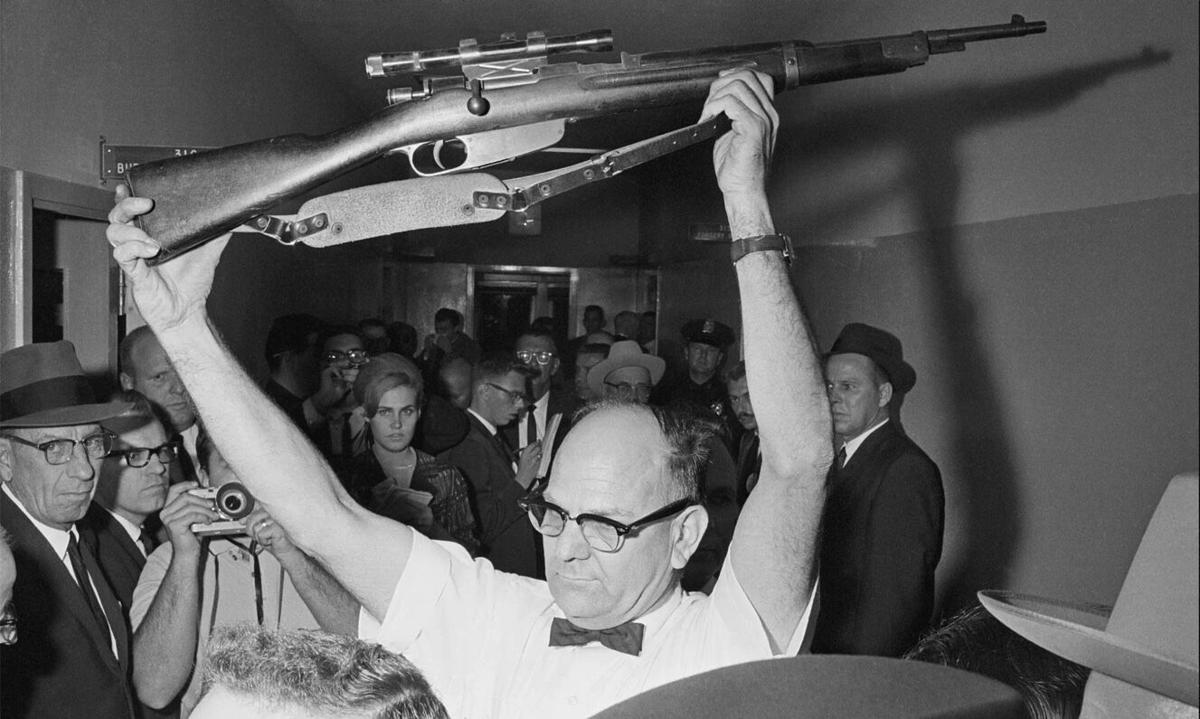 Raymond Lewis was guarding his Dallas police lieutenant from a crowd of journalists and other media while he held the rifle suspected of killing President John F. Kennedy.

93-year-old Raymond Lewis holds a photograph from his time as a Marine.

Lindale residents Raymond, 93, and Rita, 92, Lewis have been married for 75 years.

Raymond Lewis shares old pictures from when he was a Marine and when he served as a Dallas police officer. Lewis fingerprinted Lee Harvey Oswald after he was arrested in the death of President John F. Kennedy in November 1963.

Raymond Lewis was guarding his Dallas police lieutenant from a crowd of journalists and other media while he held the rifle suspected of killing President John F. Kennedy.

LINDALE — He was sitting in the auditorium during a regular school day in 1941 in Clarksdale, Mississippi, when school officials announced something he’d remember for the rest of his life.

Pearl Harbor in Hawaii had been attacked, and the United States was going to war. There was a cry for help at the school, and it was then that 15-year-old Raymond “Ray” Lewis made up his mind that he wanted to go into the Marines.

However, because of his age, he was not allowed to enlist in the military. Still, he felt determined to serve.

He was 5-foot-10 and a half and weighed 165 pounds, bigger than most teenagers. He made plans to convince his parents into going to the recruiter’s office with him and helping him lie about his age.

Lewis — now 93 and living in Lindale — said part of him wanted out of his hometown. His father was an alcoholic, and home life was terrible. Since the age of 12, Lewis had a job as a paperboy, delivering every morning from 2 a.m. to 5 a.m.

Then, he’d go home, have breakfast and go to school. He did this until he joined the Marines.

He said he quickly regretted wanting to join the military after his first day at boot camp at Parris Island, South Carolina.

“When I went into the Marines, there I was with all those older men, and I was just a boy. I felt out of place. They all smoked, so I started smoking, and I started doing what other men did,” he said.

Eventually, he grew accustomed to Marine life and began to enjoy his time there — even the bad times.

Lewis recalls the second day of boot camp when he, along with the other men, fell out and lined up. His drill instructor approached him and said, “Boy, did you shave this morning?”

Lewis had never shaved in his life . The drill sergeant asked him if he had a razor. He said, “Yes, sir, I have a razor. My daddy packed a razor for me.” The instructor told him to go get the razor.

When Lewis brought the razor to him, the drill instructor took the blade out of the razor, rubbed the blade on the Parris Island beach sand with his foot, picked it up, put the blade back on the razor, grabbed a handful of sand, rubbed it on Lewis’ face and dry shaved him.

Although situations such as these were hard for Lewis, he said they taught him discipline.

“I learned discipline in the Marines. When I became a Christian, I carried that discipline over into my life as a Christian. I’ve been opened up twice for heart surgery, I’m 93, I swam a half mile this morning. Discipline, it paid off for me, and it helped me in my Christian life to be obedient to God,” Lewis said.

After boot camp, Lewis said certain men were chosen to go on the line company, who fought in battle on the ground force and certain men were placed in other jobs, like office jobs, cafeteria jobs and more. Lewis was assigned to cafeteria duty and worked there for two years.

Although in the moment he was disappointed, looking back, Lewis was glad he did not become a lineman.

“When the people on the line would go in on the beach, they would be mowed down like flies. Literally, hundreds of men would die, infiltrating the island or the country to gain control of it. When I saw what was happening to them, I was glad that I didn’t go into the line company,” he said.

“Depending on your duties, you were promoted. So I was diligent in my duties and I got promoted,” Lewis added.

He was 16 when he became a sergeant.

He was shipped overseas after he turned 17 and visited the small islands of the South Pacific until he turned 18. Then the war ended.

Once he was sent back to the United States, he ended up at Eagle Mountain Lake Naval Air Station Joint Reserve Base in Fort Worth, where he worked in transportation until he was discharged.

After he married his wife, Rita, he worked at a mechanic shop, greeting customers and taking appointments, but he always wanted to be a police officer or a cowboy. Becoming a law enforcement officer was the most realistic option.

So he took a pay cut from the mechanic shop and took the job as a police officer in Dallas for $175 a month.

“I made detective. I went to the juvenile bureau, and it was my job to work with juveniles,” he said.

There, he won first place as juvenile detective for clearing the most cases of offenses of burglaries, robberies and thefts.

“All because I was able to talk them into confessing, so I cleared those cases. When I did that for three years, in 1957, the chief called me in and said he wanted me to go into polygraph,” Lewis said.

Lewis didn’t know what a polygraph was, then learned it was a lie detector test. The chief said with Lewis’ interrogation skills, he would be the perfect candidate to use the polygraph machine.

He worked in the Dallas Police Department’s identification bureau that housed the polygraph and fingerprint equipment. On Nov. 22, 1963, he was driving to work and received a call that President John F. Kennedy had been shot and killed in Dallas.

When he arrived at work, after suspected shooter Lee Harvey Oswald was taken into custody, he was taken to Lewis’ department, where Lewis took Oswald’s fingerprints.

Once the Dallas Police Department obtained the rifle that Oswald used to kill Kennedy, journalists and media crowded the hall in which a police lieutenant was walking with the rifle, raised in the air so no one could touch it. Lewis was photographed and published in the book, “Four Days,” where he is seen guarding his lieutenant who is holding the rifle.

“I was escorting him down to homicide with the rifle that shot Kennedy,” Lewis said.

Lewis left the Dallas Police Department in January 1978 and moved with his family to Lindale, eventually starting his own polygraph company.

At the time, Tyler police officers would take prisoners they wanted to be polygraphed to Dallas, where Lewis would polygraph them. When the Tyler Police Department found out Lewis moved to Lindale, he was asked to go to the police department and polygraph prisoners there.

Lewis began doing polygraph tests with his company for pre-employment screenings as well as criminal work for Tyler police and the Tyler Fire Department. He also started doing polygraph work in Longview.

Lewis worked as a polygrapher for Lewis Polygraph until he was 84.

He and his wife, 92, recently celebrated their 75th wedding anniversary.

Oritta “Rita” Drake met Lewis at Adolphus Drug in Dallas. Rita had been waiting at the location because a she was waiting on a friend. While she was waiting, he asked her to go see a movie with him. She agreed, and after the movie, Lewis wanted to make sure she got home safely.

Their love story grew from there and the two were married within months from meeting each other.

They’ve gone through struggles together, from financial to to health problems, they’ve managed to successfully pull through and have a happy life together.

Lewis said that throughout his whole life, it would not have been as good as it has been if it had not been for his wife, Rita.

Ray and Rita Lewis have four grandchildren and four great grandchildren. They celebrated their anniversary on Feb. 10.