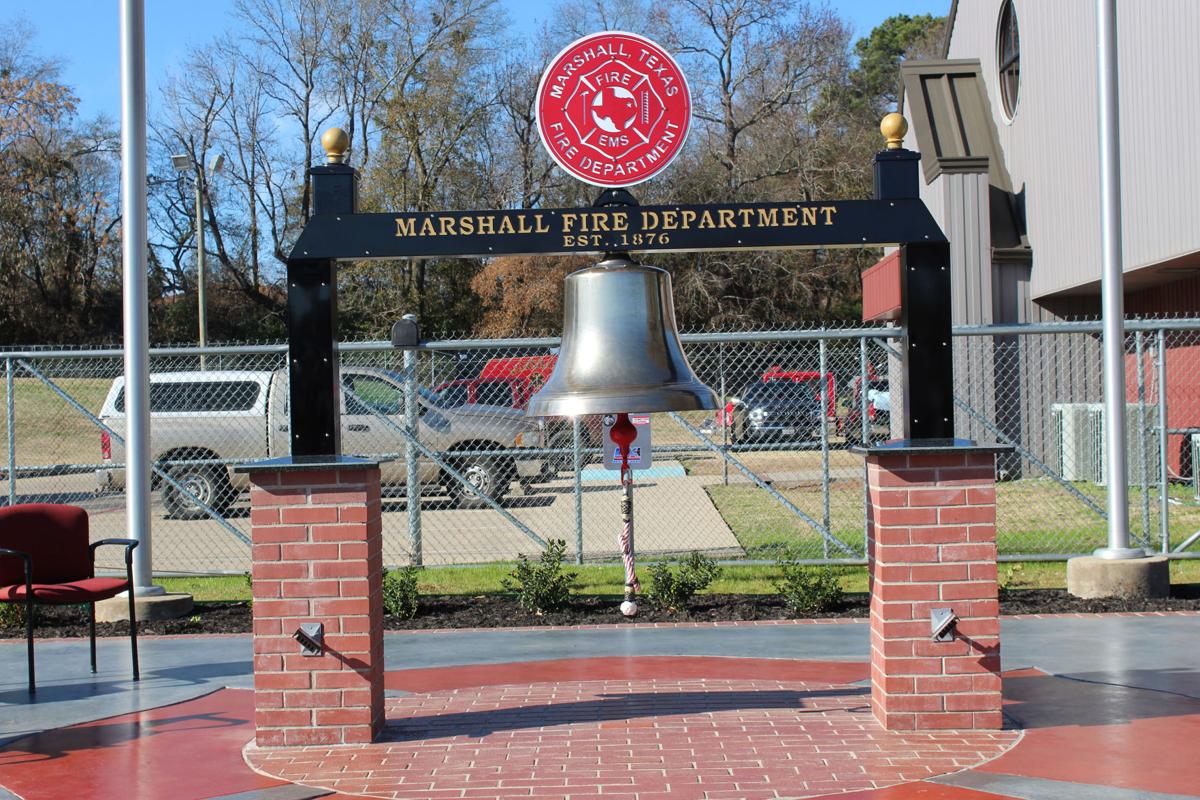 The Marshall Fire Department on Thursday hosted a ceremony for the unveiling of the 142-year-old historic fire bell at the Central Fire Station. 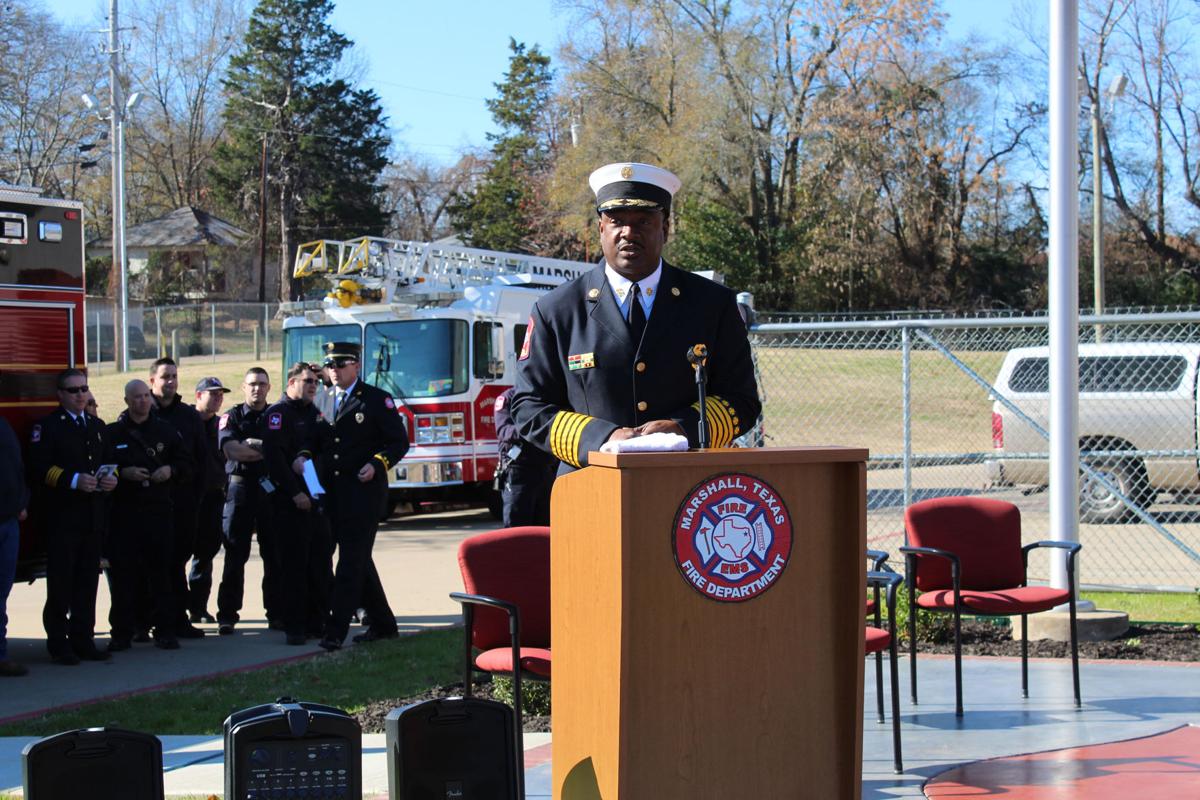 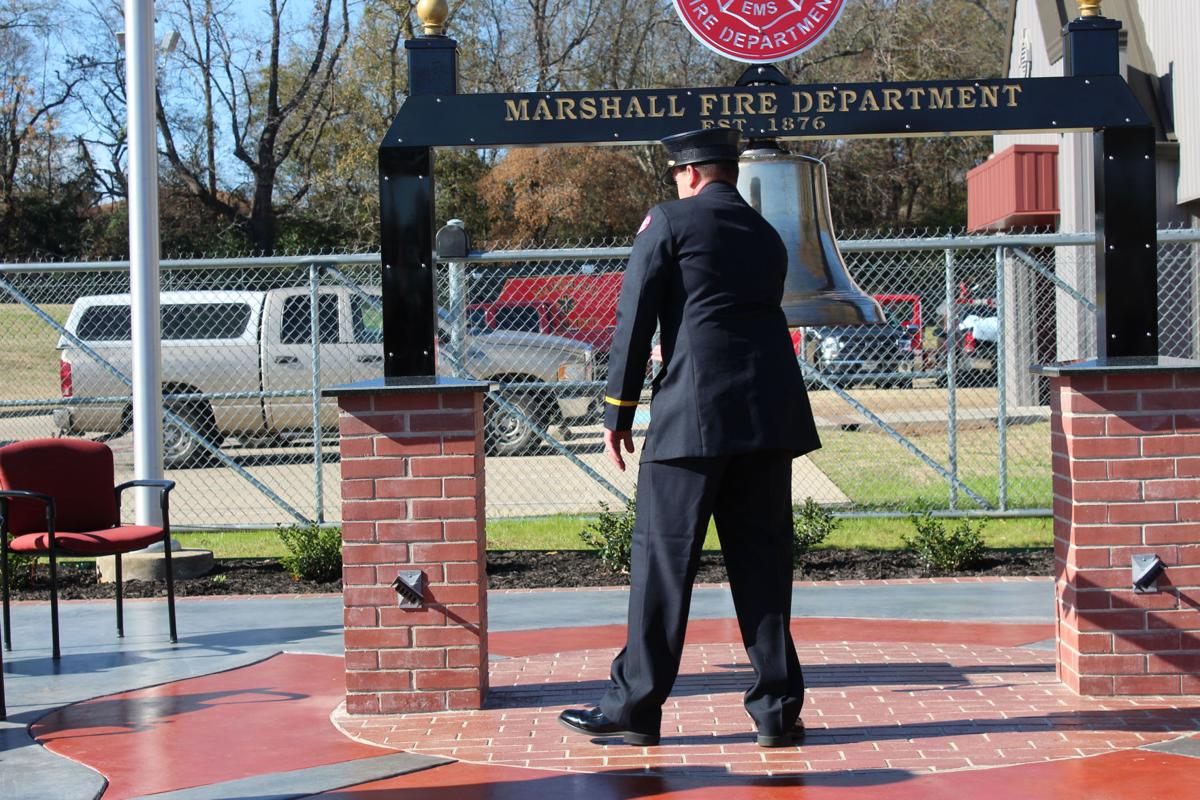 Assistant Fire Marshall Scott Barmore was given the honor of ringing the bell for the first time at its new location. An unveiling ceremony was held Thursday for the 142-year-old bell.

The Marshall Fire Department on Thursday hosted a ceremony for the unveiling of the 142-year-old historic fire bell at the Central Fire Station.

Assistant Fire Marshall Scott Barmore was given the honor of ringing the bell for the first time at its new location. An unveiling ceremony was held Thursday for the 142-year-old bell.

MARSHALL — The Marshall Fire Department finally has its restored historic fire bell in place outside the Central Fire Station.

Firefighters — current and retired — gathered with community members, city officials and the Marshall Lions Club as the 142-year-old bell was unveiled Thursday.

Assistant Fire Marshal Scott Barmore had the honors of ringing the bell for the first time in its new location.

Fire Chief Reggie Cooper said the bell project has been in the works for the 26 years he has been on the force, and that he is excited to see it completed.

“I appreciate everyone who has been working to get this project started for a long time,” Cooper said.

“This project means a lot to everyone. With this community here and all the love we have here, it means a lot to the community, and it’s an important piece of our history as well,” Cooper said.

Cooper previously has said the department worked to preserve the bell to honor its legacy of being passed through the lineage of volunteer fire departments that ultimately merged together in 1876 to form what is now the city-paid Marshall Fire Department.

The project initially got going with a donation of $5,000 from the Marshall Lions Club, followed by an additional $4,400 from the club.

“We had a lot of support from the community. The Lions Club, ETBU and even private community members really stepped up,” Cooper said. “I had people coming in who were interested in donating, making donations in the names of retired firefighters or ancestors of theirs from Marshall.”

The bell dates to 1877 and was Marshall’s earliest fire warning system. It was originally purchased for $200.

The bell was the second largest made by manufacturer R. Register and Sons of Baltimore, Maryland, and could be heard throughout any part of town.

It originally was mounted on a wooden tower in front of the Salamander’s Fire Hall, which also housed City Hall, at 106 W. Houston St., just southwest of the historic 1901 Harrison County Courthouse.

It was later moved to the Northside Fire Station at 1000 Twyman St. when it was built in 1907.

When Station No. 3 opened in 1949 at 1003 N. Bolivar, the Northside Fire Station closed. When the station was demolished, the bell tower came down, and the bell was then stored in the fire department’s training tower next to the old station.

The bell ultimately moved to the southeast porch of the historic courthouse.

The bell has been at the new station since the department’s 140th anniversary in 2016.