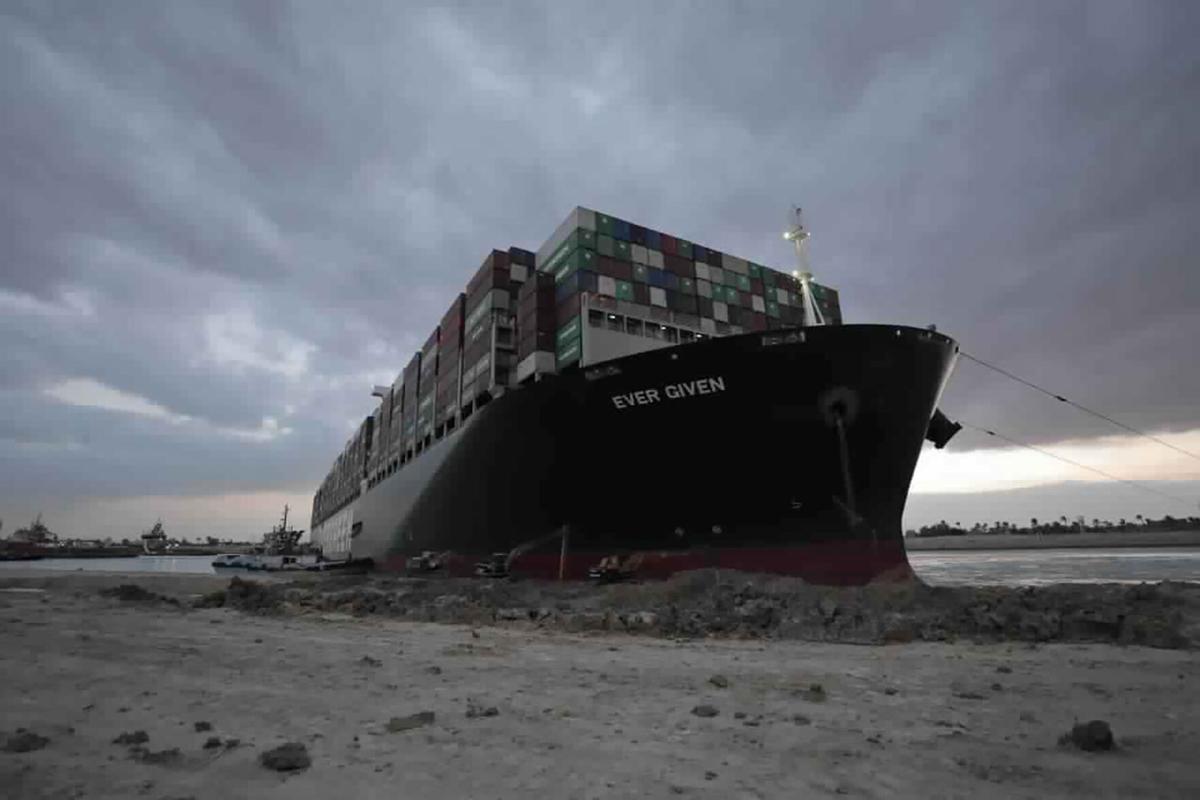 In this photo released by the Suez Canal Authority, tug boats and diggers work to free the Panama-flagged, Japanese-owned Ever Given, which is lodged across the Suez Canal on Sunday. Two additional tugboats are speeding to canal to aid efforts to free the skyscraper-sized container ship wedged for days across the crucial waterway. That’s even as major shippers increasingly divert their boats out of fear the vessel may take even longer to free. 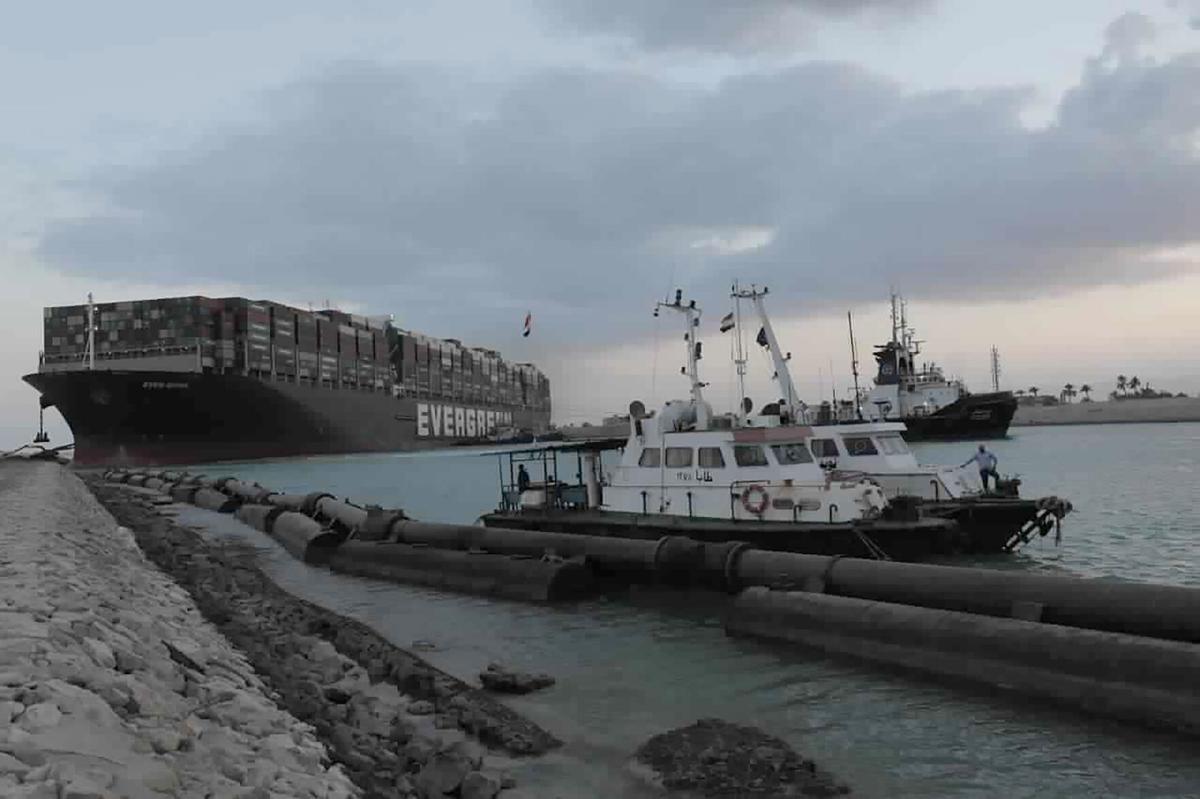 ABOVE RIGHT: In this photo released by the Suez Canal Authority, tug boats work to free the Panama-flagged, Japanese-owned Ever Given, which is lodged across the Suez Canal on Sunday.

In this photo released by the Suez Canal Authority, tug boats and diggers work to free the Panama-flagged, Japanese-owned Ever Given, which is lodged across the Suez Canal on Sunday. Two additional tugboats are speeding to canal to aid efforts to free the skyscraper-sized container ship wedged for days across the crucial waterway. That’s even as major shippers increasingly divert their boats out of fear the vessel may take even longer to free.

ABOVE RIGHT: In this photo released by the Suez Canal Authority, tug boats work to free the Panama-flagged, Japanese-owned Ever Given, which is lodged across the Suez Canal on Sunday.

SUEZ, Egypt — Two additional tugboats sped Sunday to Egypt’s Suez Canal to aid efforts to free a skyscraper-sized container ship wedged for days across the crucial waterway, even as major shippers increasingly divert their boats out of fear the vessel may take even longer to free.

The massive Ever Given, a Panama-flagged, Japanese-owned ship that carries cargo between Asia and Europe, got stuck Tuesday in a single-lane stretch of the canal. In the time since, authorities have been unable to remove the vessel and traffic through the canal — valued at over $9 billion a day — has been halted, further disrupting a global shipping network already strained by the coronavirus pandemic.

The Dutch-flagged Alp Guard and the Italian-flagged Carlo Magno, called in to help tugboats already there, reached the Red Sea near the city of Suez early Sunday, satellite data from MarineTraffic.com showed. The tugboats will nudge the quarter-mile-long Ever Given as dredgers continue to vacuum up sand from underneath the vessel and mud caked to its port side, said Bernhard Schulte Shipmanagement, which manages the Ever Given.

Excavators dug Sunday on the eastern wall of the Suez Canal, hoping to free the bulbous bow of the Ever Given that plowed into the embankment, satellite photos showed.

Workers planned to make two attempts Sunday to free the vessel coinciding with high tides helped by a full moon Sunday night, a top pilot with the canal authority said. The full moon offers a spring tide, or king tide, in which high tides are higher and the low tides are lower because of the effects of gravity during a straight-line alignment of the Earth, the moon and the sun.

“Sunday is very critical,” the pilot said. “It will determine the next step, which highly likely involves at least the partial offloading of the vessel.”

Taking containers off the ship likely would add even more days to the canal’s closure, something authorities have been desperately trying to avoid. It also would require a crane and other equipment that have yet to arrive.

The pilot spoke to The Associated Press on condition of anonymity as he wasn’t authorized to brief journalists.

On Saturday, the head of the Suez Canal Authority told journalists that strong winds were “not the only cause” for the Ever Given running aground, appearing to push back against conflicting assessments offered by others. Lt. Gen. Osama Rabei said an investigation was ongoing but did not rule out human or technical error.

Bernhard Schulte Shipmanagement maintains that their “initial investigations rule out any mechanical or engine failure as a cause of the grounding.” However, at least one initial report suggested a “blackout” struck the hulking vessel carrying some 20,000 containers at the time of the incident.

Rabei said he remained hopeful that dredging could free the ship without having to resort to removing its cargo, but added that “we are in a difficult situation, it’s a bad incident.”

Asked about when they expected to free the vessel and reopen the canal, he said: “I can’t say because I do not know.”

Speaking on Sunday to the pro-government Egyptian television channel Extra News, Rabei said Egyptian President Abdel Fattah el-Sissi had ordered the canal authority to prepare for all options, including taking containers off of the vessel. He said officials had been in talks with the U.S. about that possibility, without elaborating.

Shoei Kisen Kaisha Ltd., the company that owns the vessel, said it was considering removing containers if other refloating efforts failed.

The Ever Given is wedged about 3.7 miles north of the canal’s Red Sea entrance near the city of Suez.

A prolonged closure of the crucial waterway would cause delays in the global shipment chain. Some 19,000 vessels passed through the canal last year, according to official figures. About 10% of world trade flows through the canal. The closure could affect oil and gas shipments to Europe from the Middle East. Already, Syria has begun rationing the distribution of fuel in the war-torn country amid concerns of delays of shipments arriving amid the blockage.

As of early Sunday, over 320 ships waited to travel through the Suez, either to the Mediterranean or the Red Sea, according to canal services firm Leth Agencies. At least 10 of those vessels carried livestock, raising concerns about the animals. Rabei told the Saudi-owned satellite news channel Al-Arabiya that authorities planned to offer provisions to help them.

Dozens of others still listed their destination as the canal, though shippers increasingly appear to be avoiding the passage.

The world’s biggest shipping company, Denmark’s A.P. Moller-Maersk, warned its customers that it would take anywhere from three to six days to clear the backlog of vessels at the canal. Already, the firm and its partners have 27 ships waiting to enter the canal, with three stuck in the waterway itself and two more coming Sunday.

“We have until now redirected 15 vessels where we deemed the delay of sailing around the Cape of Good Hope at the southern tip of Africa equal to the current delay of sailing to Suez and queuing.” the shipper said.

Mediterranean Shipping Co., the world’s second-largest shipper, said it already had rerouted at least 11 ships around the Cape of Good Hope to avoid the canal. It turned back two other ships and said it expected “some missed sailings as a result of this incident.”

“MSC expects this incident to have a very significant impact on the movement of containerized goods, disrupting supply chains beyond the existing challenges posed by the COVID-19 pandemic,” it said.